In the Deep South, near the Cape of Needles there is a wave, unknown, unseen, unspoilt by the world outside of a select few – including Seamus Allardice – whom circumstance cast into this desolate area, at the end of the road.

But times, they are a-changin’.

Development encroaches; even the end of the road is no longer safe. National Parks bought the house at the point, on which the wave detonates. Now, the purveyors of conservation are putting up a rest camp and soon there will be bus-loads of sunburnt Europeans, cameras in hand, standing on the stoep of Oom Pietie’s old beach house, taking in the sights, sounds and smells of our coastal paradise. They’ll savour the aromatic blend of fynbos liquorice and salty kelp. They’ll hear the shrill cry of gulls mixing with the low rumble of waves rolling in on pebble beaches. And they’ll take snapshots of freight-train rights, swelling through the kelp beds before dredging across the reef and funnelling down into the bay. From there it won’t be long before one of those snapshots makes its way into the hands of a surfer.

And then our secret will be out.

There was a time, not that long ago when Oom Pietie and his family had to drive along the beach in a truck to get to his house. It took them almost a day to get there and theirs were the only voices to interrupt the melodies of nature. But they’ve since sold to Parks Board and now a gravel road leads to a hamlet, which looks across the bay at Oom Pietie’s old house. It was this gravel road which brought us to the wave. Souls in search of silence bought properties in the hamlet and we moved with them, some of us sons, others friends and in one case, a builder.

From balconies across the bay we watched the wave, studied its moods, debated the possibility of surfing it. “Never,” we concluded, “it’s too dodgy, too exposed, too…” well, you know what we were worried about…

But one of us had other ideas. 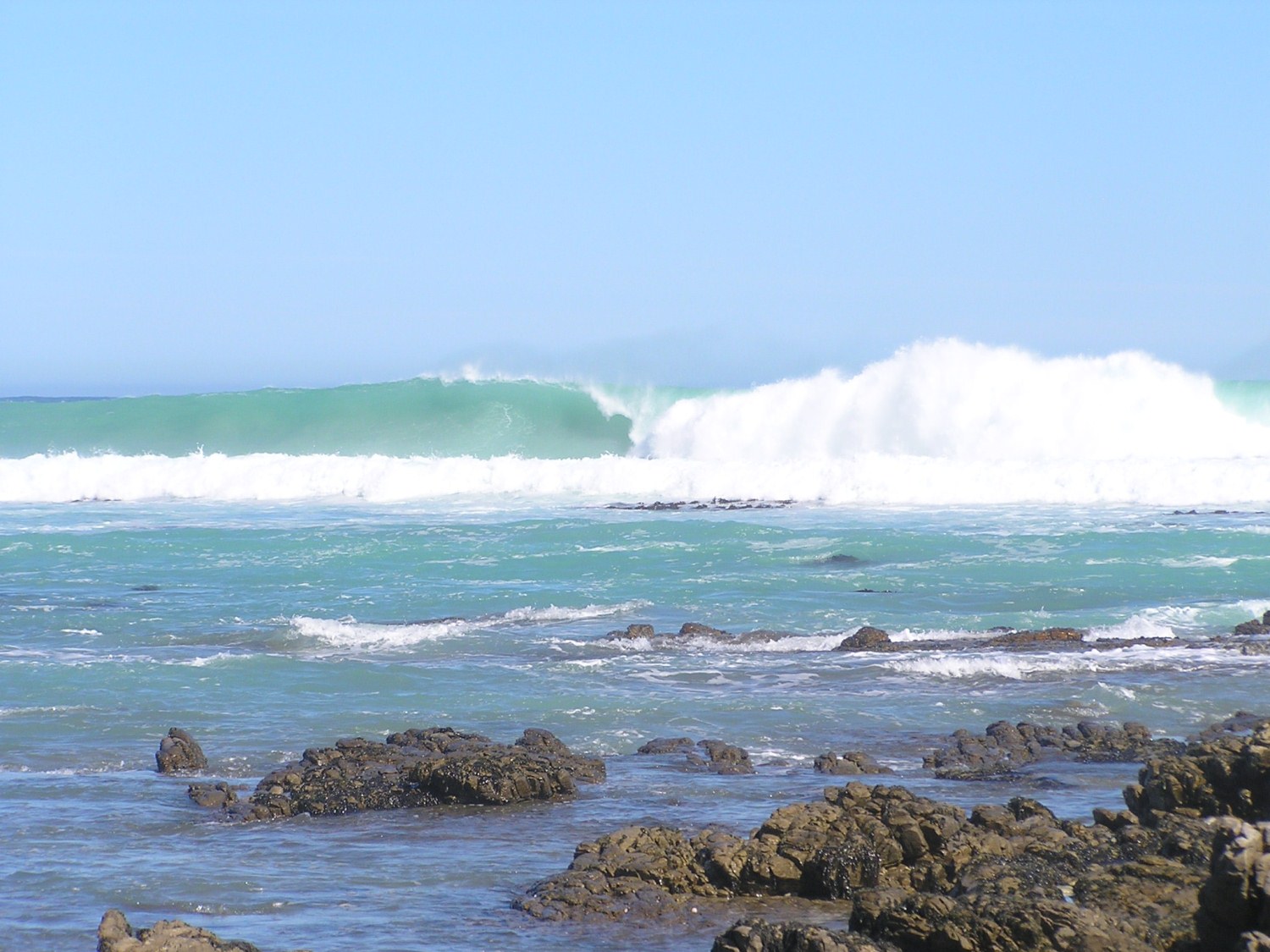 Sitting atop a partially constructed roof, hammer in hand and utility belt around the waist, the builder watched with an explorer’s eye. Isolation leads to desperation and surfing can be a cruel and demanding mistress. He ignored our voices of reason. Roped in a local boy and took the first pioneering paddle.

Armed with only enthusiasm on his part and naivety on the part of the boy, they jumped into the murky waters of the bay. Across flat water they paddled, around the full stop rock, on which the wave’s energy dissipates with a mighty crash and into the open ocean.

Even through binoculars from five hundred yards across the bay, size is impossible to judge. But watching from the stoep of Oom Pietie’s partly renovated house we were astounded. Standing close enough to taste the salty sea spray, what we’d previously thought to be three foot became six with the advantage of bodies in the water for perspective. And what had looked like a little barrel section became a heaving gauntlet across barely submerged ledge.

The builder and the boy had only just rounded the full stop rock when a massive set rolled in. We stood and watched, our doubts vindicated by the ocean. The boy ditched his body board as the wall of white water mowed him down. His leash snapped, sending the yellow foam and plastic board cart-wheeling towards the rocks. The boy, being an age group regional swimming champion, was never in real danger though and with the help of the rest of the set, got washed onto the rocks near his board.

The builder meanwhile was weathering the barrage, doing the clinging duck dive, holding onto his surf-board at all costs despite being sucked back over the falls. When the set passed he scratched out beyond the impact zone and sat rather deep and wide waiting for his wave. When it came it was a bomb, a heaving double over-head beast, for which he was ill equipped.

The builder turned and paddled, as it swung wide, gaining in size all the while. As he launched himself over the precipice the wave jacked again, forcing him forward with alarming speed. Instinct kicked in as he pig-dogged the take-off and raced down the face of the wave, heading for the safety of deep water. But his elation, and ours, was short lived. It was the first time anyone had ridden a wave there and the ocean, like a wild stallion being broken, wasn’t submitting. Just when it looked like the builder had navigated the most treacherous section of the wave, phantom chop caught him off guard sending him lurching unbalanced towards danger. Then, for good measure the wave closed out, imploding on the wind-milling figure three-quarters of the way down the face.

If the boy had been owned earlier without riding a wave, simple words cannot describe the builder’s working-over. When he surfaced he’d been tumbled into the tidal pool in front of Oom Pietie’s house. His wetsuit was pushed up at the sleeves, he stank of red-bait and his board was creased, but somehow still in one piece. Despite all of this he was smiling, smiling the smile of a man in lust.

He would argue that it was love, but how could it be? It was only one wave, and not a particularly long one at that. No, it was lust, which grew over the years, on smaller, benign days and on bigger malignant days – into love. The builder developed a special bond with the wave, surfing it whenever he could, watching it from his perch amongst the rafters of his own construction when he couldn’t. Making the long walk to a secret spot. Photo by Ryan Hill.

Since that first time he’s shared his knowledge of the wave with us. And he has moved on, the house completed. We continue to surf the wave whenever we can, always mindful that we are partially intruders. Only the builder has been fully accepted. He has dug hundreds of sea-urchin spines out of his feet, the penalty for not treading carefully when rushing through the tidal pool. He has watched the sun rise and set from the water. He has creased boards, broken leashes and snapped boards on the wave. And he has surfed on, despite the presence in the line-up of an apex predator. In short he has been adopted by that small piece of Southern Ocean.

We have been trying to match his achievements. And until recently we have struggled. The ocean gives up its secrets slowly. We too have been caught inside by clean-up sets and we too have misjudged the take-off, thinking we were in the right spot, only for the wave to warp cruelly. At the crucial instant pitching, sending us, flailing futilely, from the crest to the trough and lower, bouncing shocked bodies across the urchined bottom. But these are the hard yards. Eventually they pay off. You cannot always be told where to sit, where to paddle and where to take-off. Often you have to figure it out. When the peak shifts, when sets swing wide and when the tide drops or rises only experience will suffice.

Gradually we have gained that experience.

Acceptance comes at a price, but there are reasons to be optimistic. No longer do we sit digging urchin spines out of our feet. It has been a long time since we’ve had to patch a jagged hole in a board, ripped by an unexpectedly exposed rock. No new FCS fins have washed into the tidal pool for a while. These and the mischievous pod of dolphins that surfed with us recently are promising signs.

Perhaps even, omens of our acceptance.

Soon though, it won’t just be us few – the builder, the residents and their friends – who know of the wave. Development is inevitable. And it comes at a cost. The drone of heavy construction machinery now drowns out the rumble of pebbles in the surf. Our quiet corner, exposed to the world. Outsiders allured by our rugged coastline, trampling its magnificent, unspoilt natural beauty.

It was all too good to keep to ourselves. But, we would have liked to, revelling in the guilty pleasure of not sharing. Telling only friends, a select club, membership by invitation only. Subject to an initiation, chosen and perpetrated by the ocean itself.

Now, it’s out of our hands. The right we assumed to invite only our chosen few revoked by the purveyors of conservation.

The new explorers will assume that they are the first. Staying at a luxury rest camp, they’ll claim to be pioneers, rename our wave and tell their friends. But they too will have to pay their dues. It won’t be easy. The ocean has a way of looking after itself.

So you have been forewarned. The rest camp is in the final stages of construction. You could get there before our wave becomes common knowledge, splashed across the pages of every surf guide to South Africa.

Or even better, go find a wave of your own, to surf until development encroaches again. It’s not as difficult as you might think. Avoid the N2, take every gravel road heading towards the coast. Befriend farmers and fishermen, ask questions – politely. Take your mates, your boards and get in your car and drive.

You don’t have to surf Big Bay with two hundred of your closest acquaintances from now until you hang your wetsuit up to dry for that final time. Your very own secret spot is out there, just waiting for you to find it.

Go discover it. Before it becomes yet another badly kept secret.