The average age – of the seventy strong gravity racing field who gathered at the Houteq Science Complex, in Grabouw, for the 2018 Hi-Teq Gravity Festival – was considerably older than the last time the longboarding community gathered for a Western Cape Race, three years ago. In fact, the masters’ division for riders over the age of 30 was arguably the most competitive age grouping.

Absence it turns out does make the heart grow fonder and rekindles the stoke levels. In fact it was the 30 year olds and over who were frothing the hardest. Skating run after run without a break until their out-of-practice legs and backs began to cramp. Three days of skating two challenging hills will certainly leave a number of competitors with a bruise or two, the need to visit a sports massage therapist to get all the knots and spasms worked out, but most importantly – an ear-to-ear grin for weeks to come. 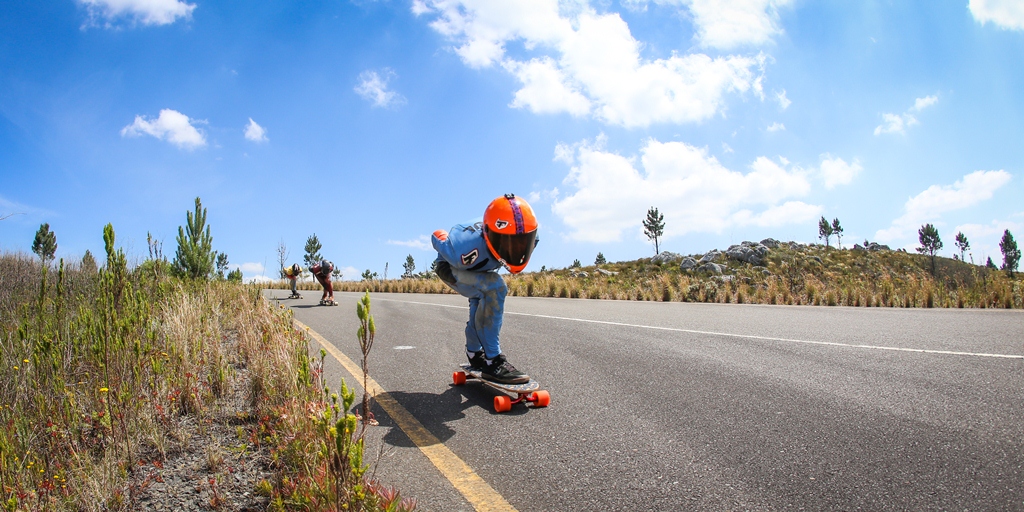 The opening day, on Saturday the 15th of December, saw the riders take on the Houwteq hill. Dropping down the Southern side of the Houwteq Complex it is the easier of the two hills as the right-hand corner at the bottom of the hill is not quite as tight as the left-hander at the bottom of the High Rising run. Reece Trout, though not quite in the over 30s club just yet, was the most eager competitor of the opening day. Hardly taking a break he completed run after run of the Houwteq hill. “I wanted max runs, max fun” Trout confided. “I say; if I’m having the most runs I’m having the most funs” he laughed.

One skater who bucked the trend of older male (well older in skateboarding terms at least) entrants was Isabella Rossiter. Skating her first event “Bella” is just twelve years old, and along with long-time shredder Gabi Murray-Roberts and luger Maryke van der Walt one of only three women to enter the 2018 Hi-Teq Gravity Festival. Speaking about her fledgling experiences in the downhill scene Rossiter recounted: “I’ve been doing downhill for six months. I went to a birthday party and my friend had a longboard. I thought it was really cool and then got one for my birthday and got into it. Then Yoshi (Alyosha Diebold, the owner of Baboon Boards – one of Cape Town’s skate shops), told me there was a race coming up and I thought it would be fun. And it has been.” Addressing the concern of parents about letting their children and especially daughters take up a sport with is perceived to be dangerous she revealed with a smile: “My mom has been a bit nervous watching me skate, but I think she enjoys it too”. 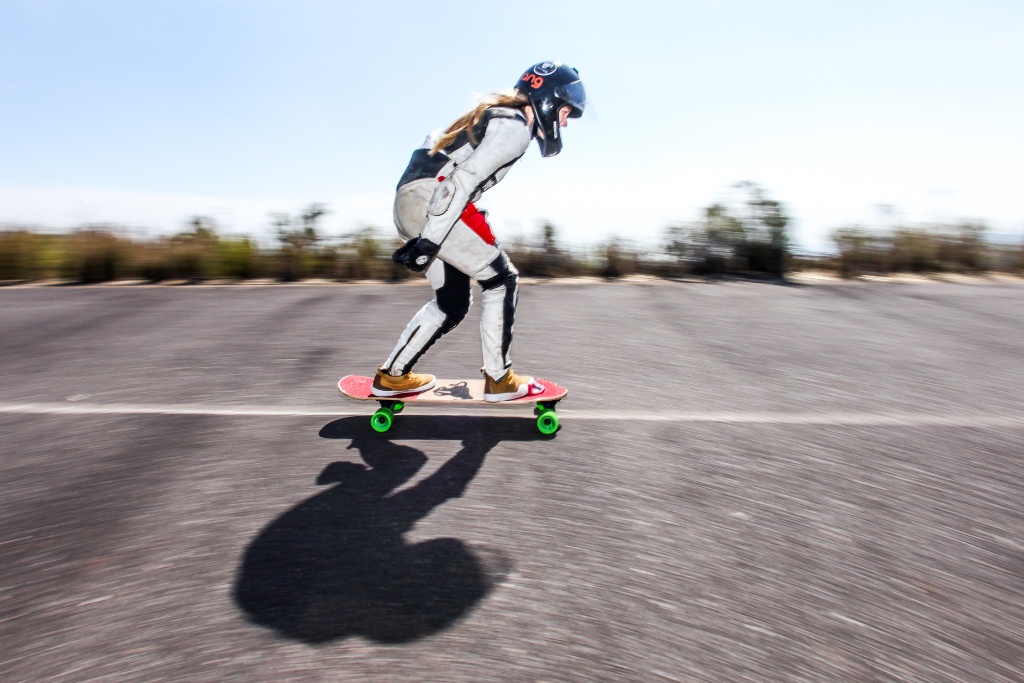 Young Isabella Rossiter, at just 12 years old, was not only the youngest rider to take part but also one of just three women. Photo by Oakpics.com.

On the second day of the event, the skating moved to the Northern side of the complex and took on the infamous High Rising. Complete with Carnage Corner, a sharp off-camber left-hander, at the end of a mine-shaft steep drop it was one of the most challenging hills on the South African gravity racing circuit five years ago. Now, with riders out of practice it took quite some getting used to and inspired a significant amount of respect.

Saturday had been a practice day only, and the plan had been for the round robin heats to be raced on Sunday afternoon. But, with everyone happy to accept their Monday afternoon race heat opponents to be drawn from a hat, the decision was made to extend the free riding for another full day. This ensured as many runs on the High Rising hill as every skater wanted and kept the excitement levels sky high. 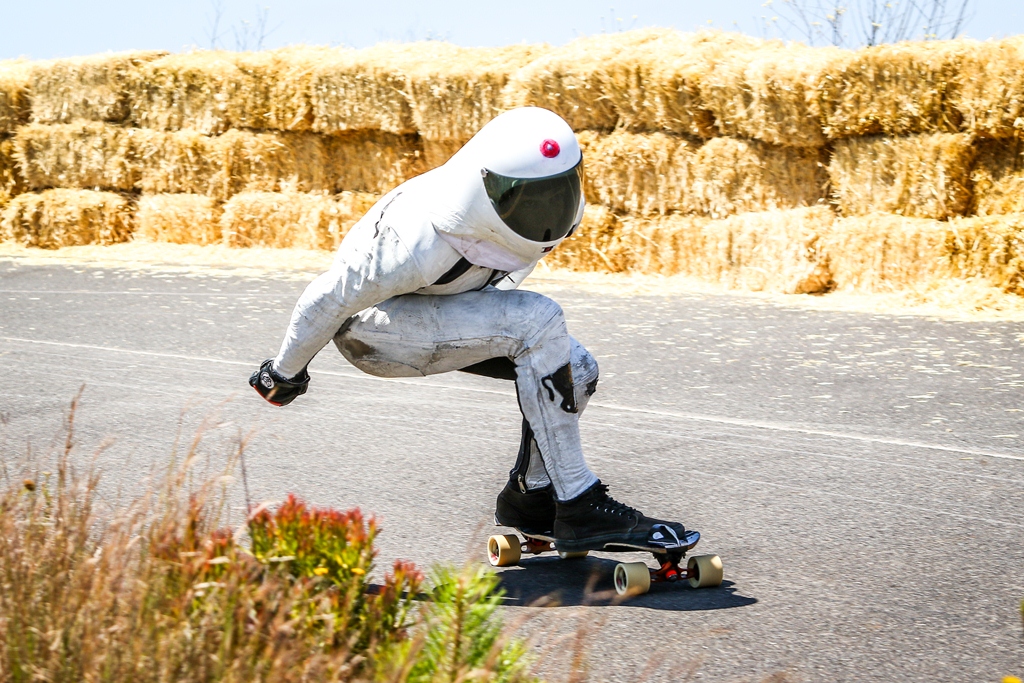 Décio Lourenco once again proved unbeatable on race day at High Rising, on the final day of the 2018 Hi-Teq Gravity Festival. Photo by Oakpics.com.

By the time Monday the 17th of December rolled around the signs of everyone being a little skated out were starting to show. The morning saw a slower start to proceedings with breakfast, coffees, rehydrating on Zooka Kombucha and the swapping of two days’ worth of war stories taking precedent over rushing to the top of the hill. Once again the riders took on the beast that is High Rising, but with a full day of acclimatisation under their belts the racing was faster and closer than it had been the last time High Rising was raced in 2015.

The final was remarkably similar to the 2015 showdown too. As Décio Lourenco and Nick Hook went wheel-to-wheel for the title. Lourenco’s tactic of pushing out hard, leading from the front and then scrubbing speed early with a slide, before setting his line for Carnage Corner forced Hook into an aggressive approach. Hook, relying on his lighter weight to allow him to carry more speed into the corner overtook Lourenco on the outside heading into the crucial turn. But, just like three years ago Hook was unable to hold the tight line required at the speed needed to pass Lourenco. Sliding into the bales of hay lining the outside of the corner Hook could only look on as Lourenco rolled across the line, followed by Nicky Taylor and Michael Hardham. 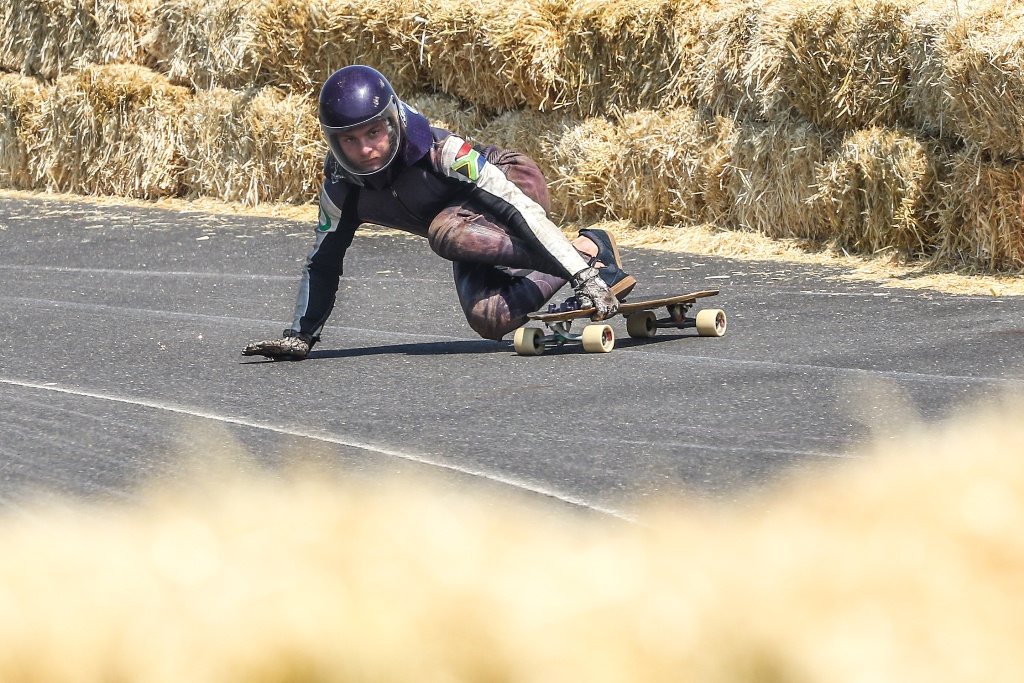 Nick Hook was, as in 2015, Lourenco’s closest rival – though he crashed out of the final in pursuit of victory. Photo by Oakpics.com.

To the victor went the spoils of the 2018 Hi-Teq Gravity Festival Title, the trophy and a bottle of Leonista 100% Karoo Agave Spirit. The runner up and third place finisher were awarded with special edition, hand-crafted, Project Skateboard decks. Looking back on a successful weekend of longboarding, luging and in-line skating event organiser Ricki Allardice concluded: “It’s been good. From a rider perspective everyone had a great time, so that’s cool.” 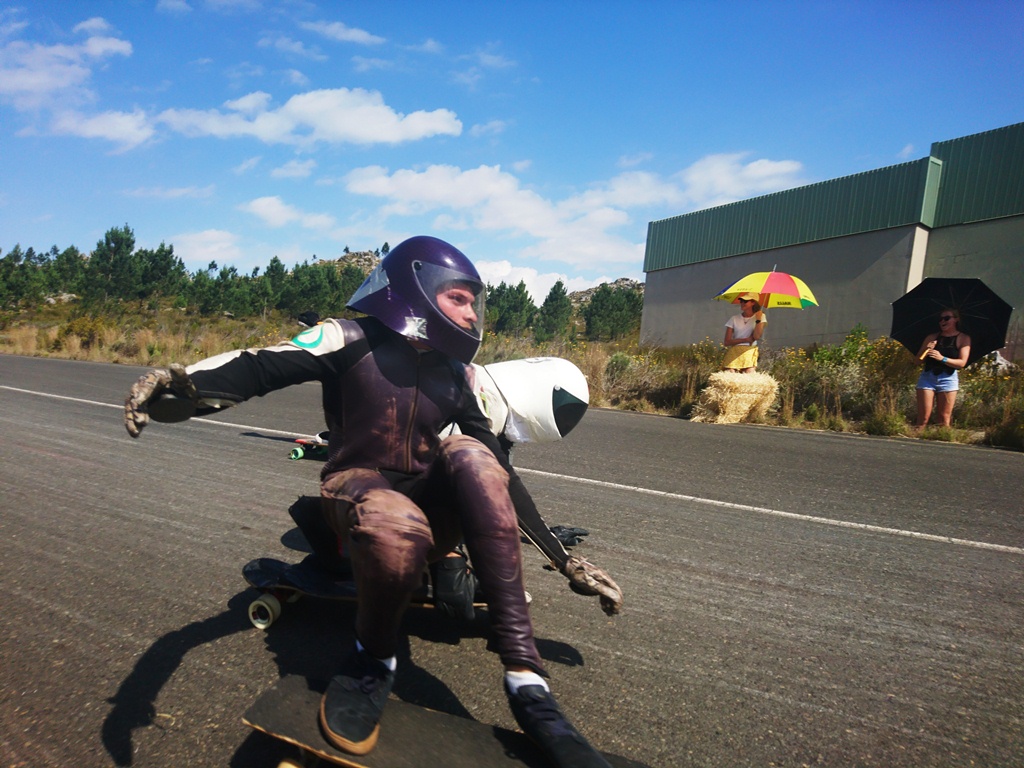 Nick Hook taking the bold outside line in an attempt to pip, his great rival, Décio Lourenco to the title. Photo by Seamus Allardice. 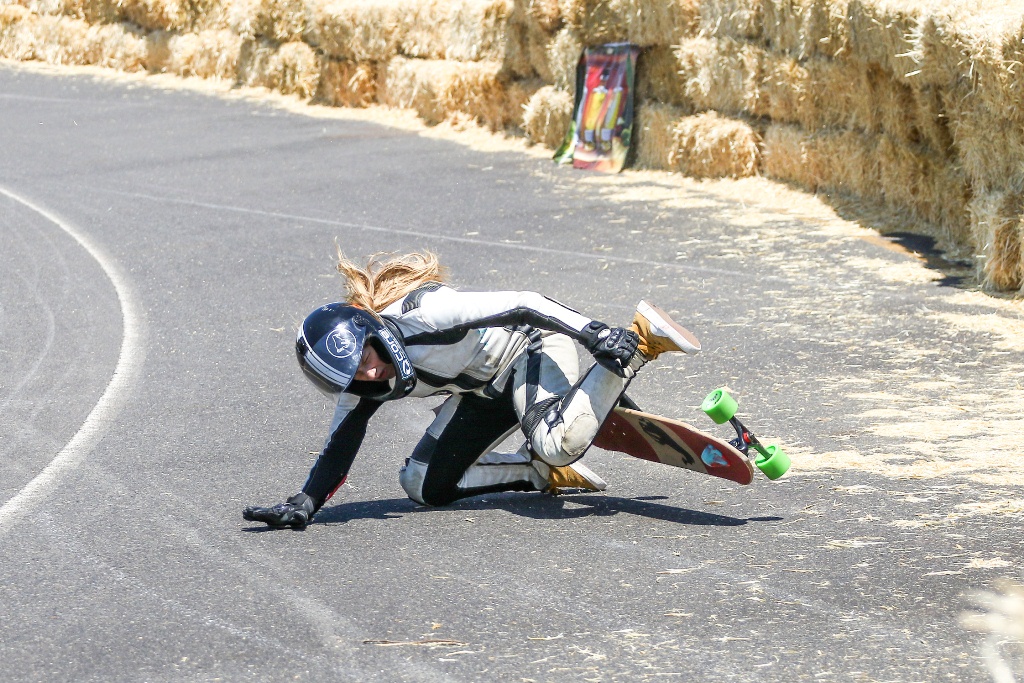 One of ‘those’ moments which get mothers a little worried, but Isabella Rossiter’s stoke levels were not dented in the least by a crash or two. Photo by Oakpics.com.