Imboko Giant got their 2019 PwC Great Zuurberg Trek campaign off to the best possible start on Friday, 24 May. Marco Joubert and Nicol Carstens established a 3 minute and 7 second advantage over Andrew Hill and Tyrone White on the 71 kilometre long opening stage. The mixed category stage honours went to Team Garmin; while Tracy Campbell and Michelle Scowby were the first women’s team over the finish line at the Zuurberg Mountain Inn.

At the sharp end of the race, in the elite men’s category in particular, the battle was fierce; Joubert, Carstens and co could thus not fully appreciate the stunning Eastern Cape scenery. Further back, where the racing results mattered less, the beauty of the day and the region could be enjoyed to the full. Starting in the Zuurberg Mountains before dropping down, along the Seven Dwarves descent, to the Sundays River Valley where South Africa’s largest citrus exporter the Sundays River Citrus Company is based, riders were treated to a perfect winter’s day. Crisp clear skies allowed for spectacular views, as far as they eye could see, and helped create a perfect setting for mountain bike riding and racing. 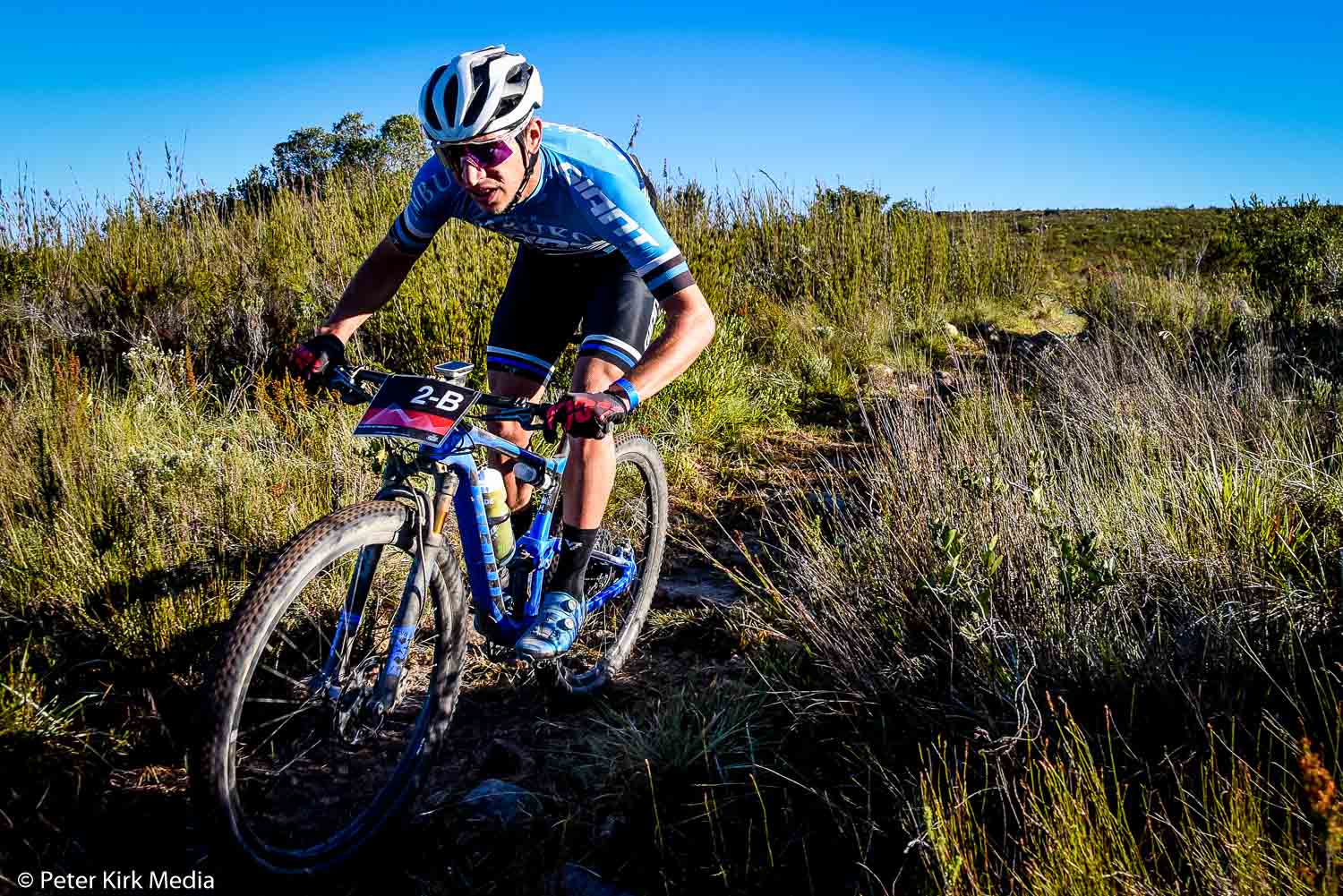 Nicol Carstens and Marco Joubert powered to victory on the opening stage of the 2019 PwC Great Zuurberg Trek on Friday 24 May. Photo by Peter Kirk.

Joubert, who is himself an Eastern Cape local, made the most of the conditions. He and Carstens devised a plan to lead the field into the Seven Dwarves descent. “We got into the first singletrack first, that was our game plan” Carstens confided. “Then I just followed Marco [Joubert]’s wheel, he is so fast in the singletrack. It was flowing and fast with some technical sections, so it was super nice.”

Despite their stage win the Imbuko Giant combination were eager to stress that only the first of three challenging days were behind them. “From what I heard tomorrow is a tough stage, so you can never be too secure. Marco said tomorrow is hard, so we had to save energy today” Carstens explained. 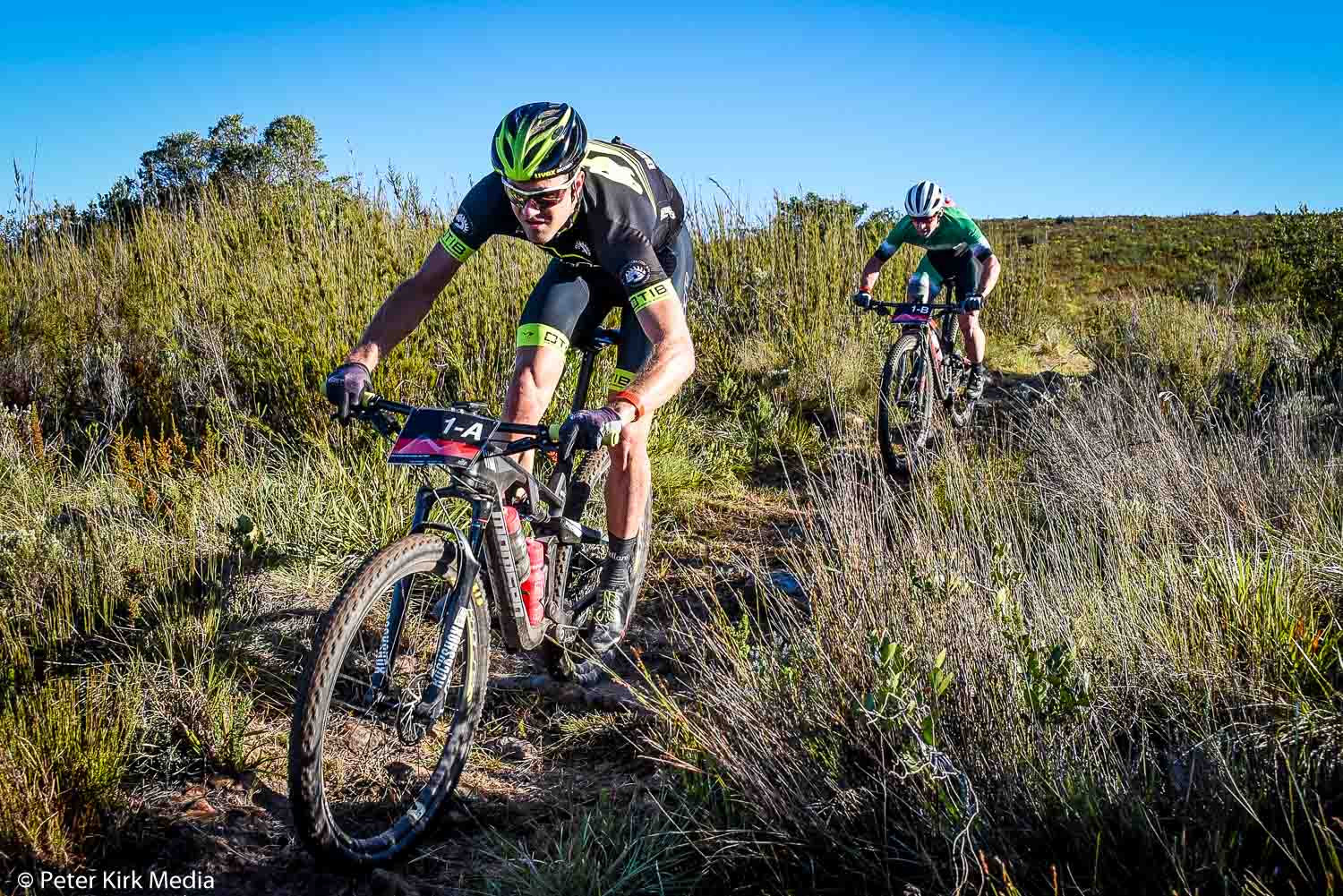 Hill, did not sound too disappointed by how the first stage unfolded for himself and his Darkhorse Wheels TIB/Drivechain Academy teammate White. “Normally I would have been racing with my teammate Shaun-Nick [Bester]. But he decided to take a little break after a bout of tick-bite fever” Hill confirmed. “It’s always great to come down to this race though” he said, changing tack. “I love this place and the people are so friendly. It’s always unbelievable.”

“On the racing front it was a quick start this morning. Then it is always great going down Seven Dwarves, it’s a really good section. We kept it safe going down there because Ty [White] hasn’t ridden it before. The Imbuko Giant guys opened up a bit more of gap, probably 30 to 40 seconds, on the next climb and then we lost a bit more time on the last climb” Hill elaborated. 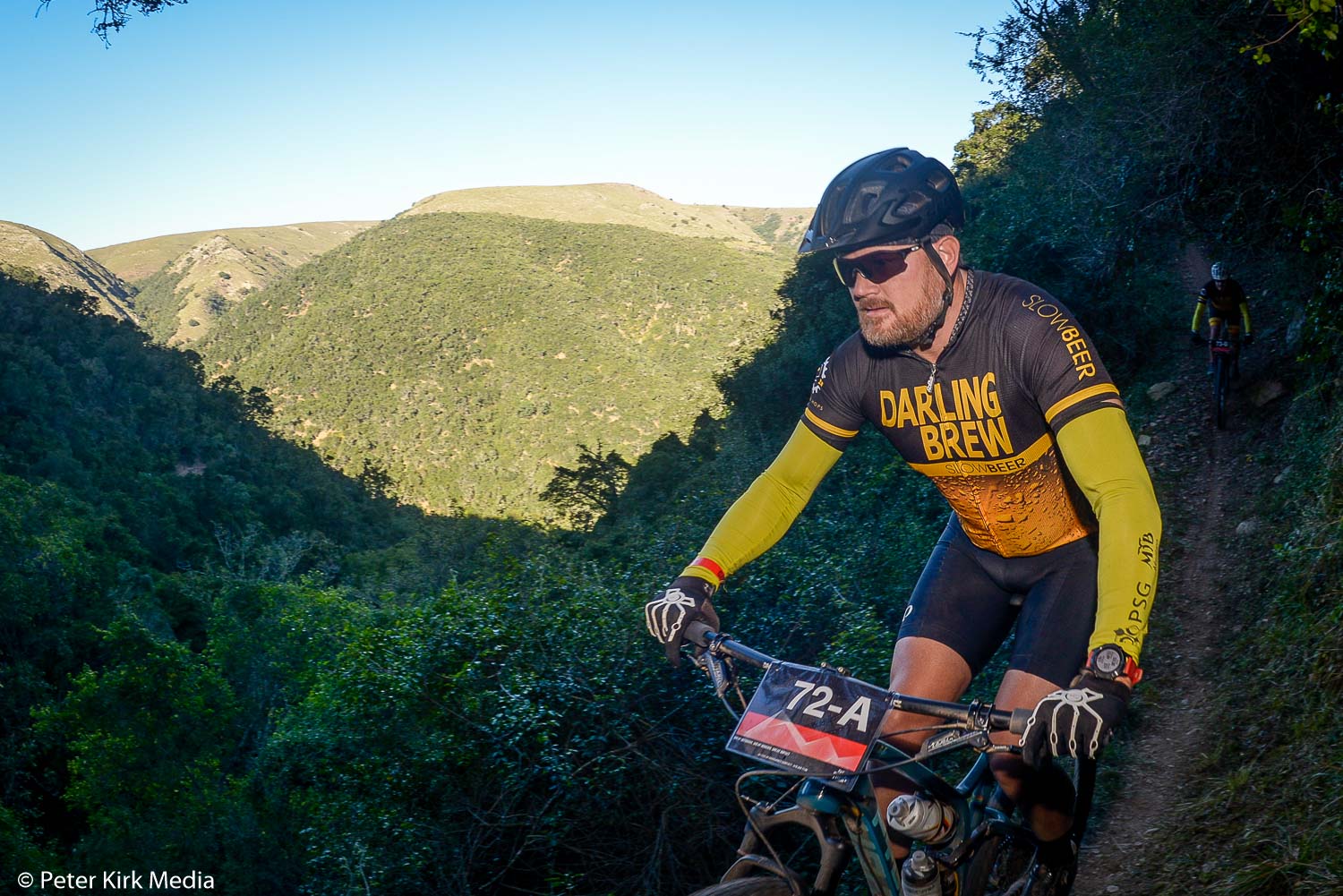 Technical in places, fast and flowing in others the Seven Dwarves descent is an iconic feature of the PwC Great Zuurberg Trek. Photo by Peter Kirk.

“Anything can still happen” the man from Hillcrest said, looking ahead to the next two stages. Hill then recalled: “We had a disastrous day two last year. We had a mechanical which we couldn’t fix without someone else’s help. But we managed to ride back and win it. That’s mountain biking, anything can happen.”

The young Valley Electrical Titan Racing team of Roussouw Bekker and Mark Fourie were third on the day, 9 minutes and 7 seconds behind the pace setting Joubert and Carstens. They, like Hill and White, remain in the hunt as the Queen Stage of the PwC Great Zuurberg Trek is infamous for throwing a spanner in the works of the best laid plans of pre-race favourites. 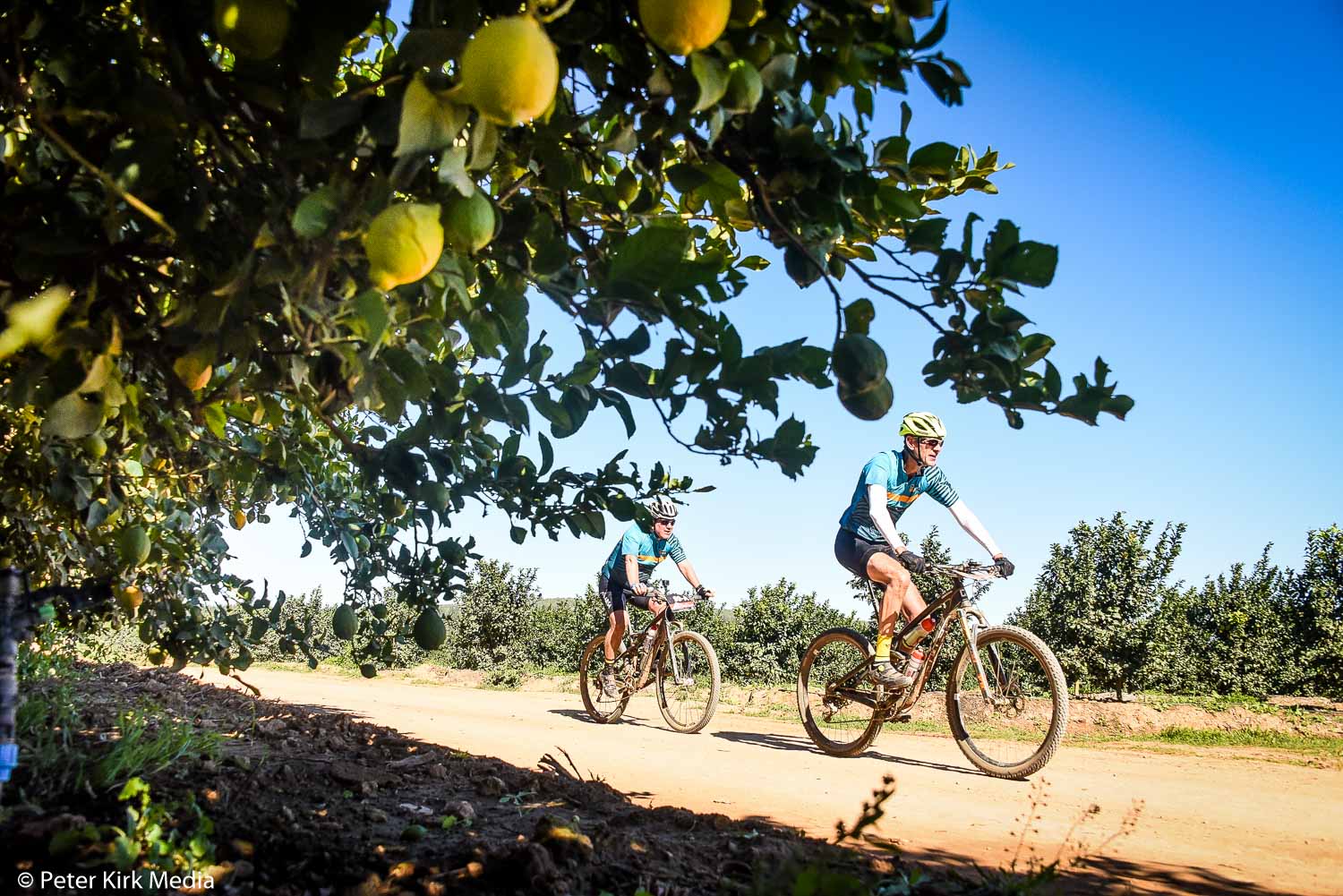 Behind the top three men’s teams Robyn de Groot was the first solo rider across the line. The South African marathon champion showed that she is continuing her remarkable return to racing and could well dent the egos of any of the leading men’s teams by usurping their places on the overall podium if they should slip up.

In the mixed category Du Toit and Swanepoel were in a class of their own. A day long battle unfolded for second position though. It could well prove to be the fiercest, of any category, throughout the three days of racing. Liesel and Ken Prentis pipped Hidegarde Cronje and Victor Terblanche to silver on the opening stage by just 9 seconds.

The women’s category stage honours were secured in a far more commanding fashion by Campbell and Scowby. With the majority of the women in the field taking part in the mixed category the pair from Port Elizabeth are only up against Eleanor Brummer and Andrea Duffin. The Aspire Livefit/Thule women can thus make the most of their time on the trails. “It was an awesome day” Campbell enthused after crossing the line. “The weather played ball, the singletrack was amazing and that first downhill was insane.” 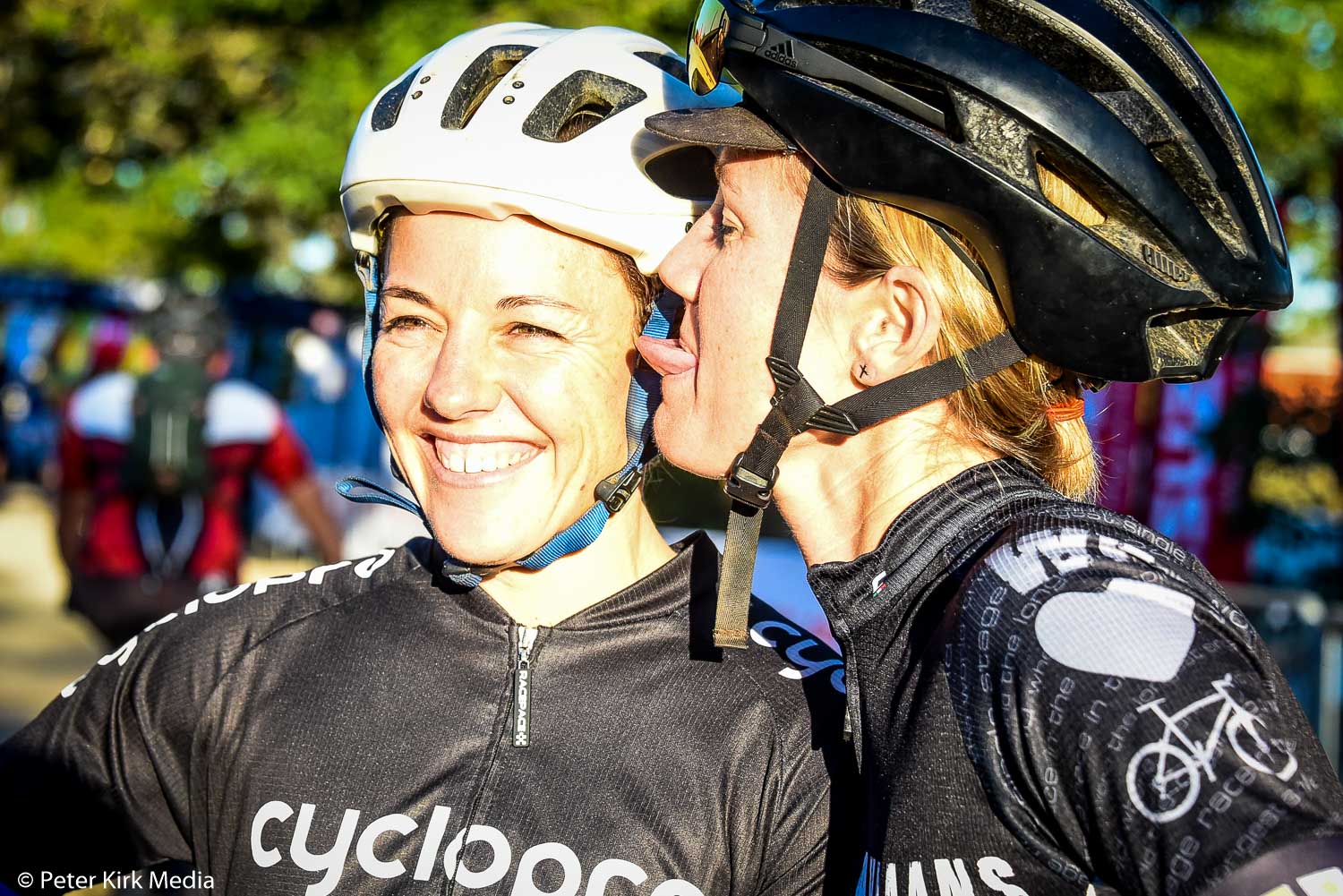 Tracey Campbell (left) and Michelle Scowby (right) were in high spirits from start to finish on the opening day of the PwC Great Zuurberg Trek as they rode to stage victory. Photo by Peter Kirk.

Campbell, Scowby and the rest of the PwC Great Zuurberg Trek field will be hoping for more of the same over the next two days. If the weather forecast holds they certainly will receive it. Temperatures in the mid-20s and little, to no, wind are predicted for Saturday and Sunday to compliment the spectacular trails. For riders weary of the sting in the tail of the Queen Stage this is hearting news. The 88 kilometre long route, on Saturday 25 May, features a significant 1 750 metres of climbing, but provides more exceptional Eastern Cape views as a reward. In perfect weather conditions even that should not prove unduly challenging.

At the front of the race there will be chances to make up or lose time though as pushing hard on mountainous terrain is never risk free. While for those not racing for positions the PwC Great Zuurberg Trek is all about the experience. To keep track of the action from home mountain biking fans can follow @zuurbergtrekker on Twitter and @great_zuurberg_trek on Instagram. Plus like the Great Zuurberg Trek Facebook page for all the photos, rider interviews and more from the heart of the Zuurberg Mountains. 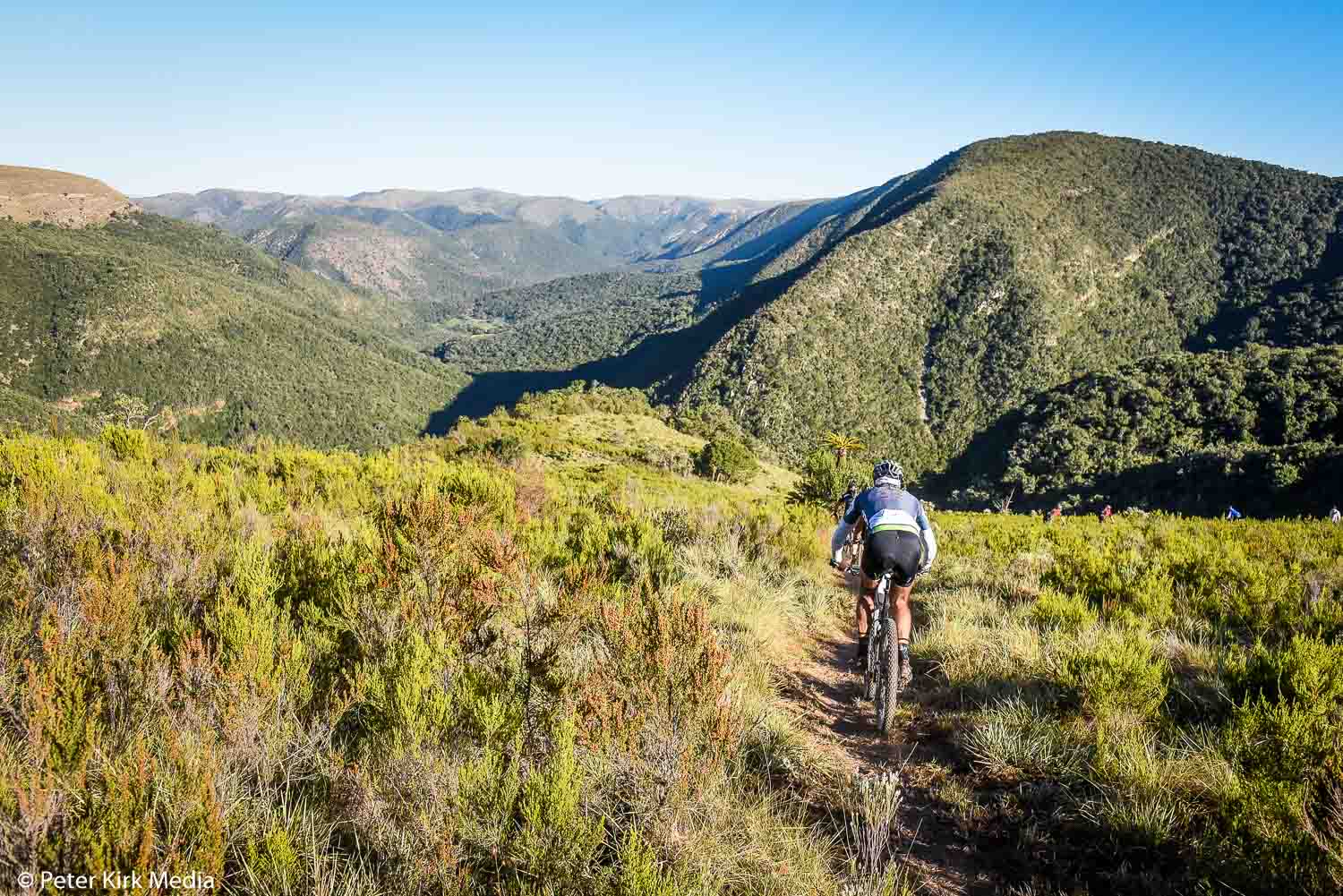 The fun in the Zuurberg Mountains only just began with Stage 1. Photo by Peter Kirk.