The Queen Stage of the PwC Great Zuurberg Trek, which took place on Saturday 25 May, served up dramatic mountain biking. Marco Joubert and Nicol Carstens fought back from an early puncture to extend their general classification lead. While in the mixed and women’s categories Yolandi du Toit and Ben Melt Swanepoel, as well as Tracey Campbell and Michelle Scowby had less nerve-wracking days.

Climbing the Zuurberg Mountains, descending into the Great Karoo and climbing back up into the Zuurberg Mountains was always going to be a serious test of fitness and skill. The rocky Karoo trails, though heralded as fantastic by one and all, provided a challenge newcomers to the race were perhaps not expecting. The Imbuko Giant team, of Joubert and Carstens, were not the only riders to puncture by any means. The majority of the leading teams suffered some form of tyre issues as the route took its toll. 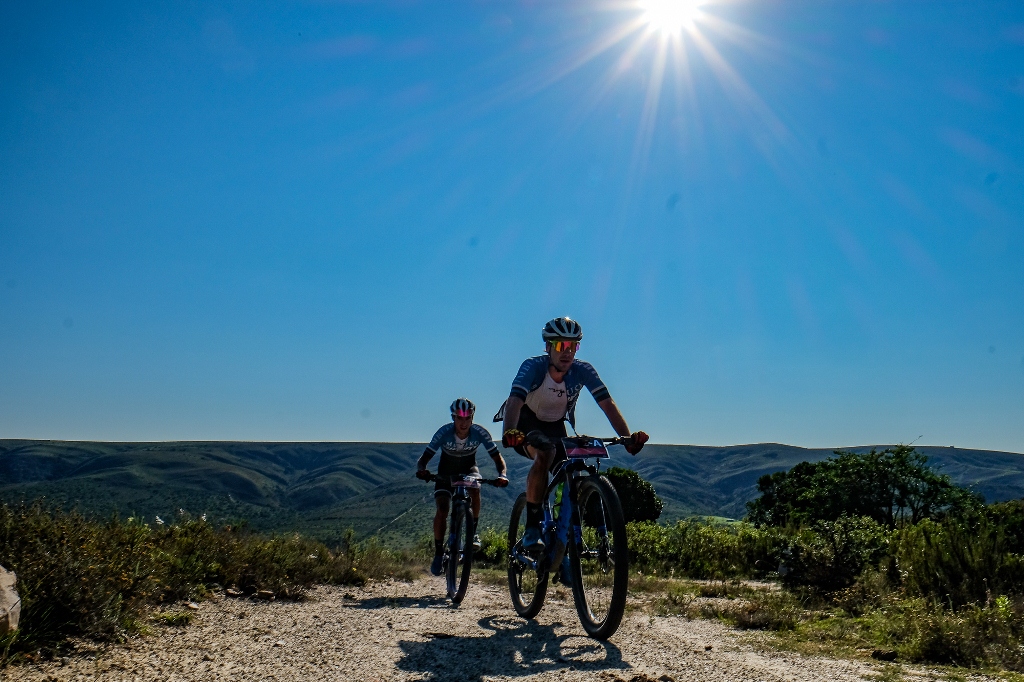 Marco Joubert and Nicol Carstens fought their way back from an early puncture to claim stage honours on Day 2 of the 2019 PwC Great Zuurberg Trek. Photo by Zane Schmahl.

“Things did not start out as planned” a visibly relieved Carstens said from the finish line at the Zuurberg Mountain Inn. “Marco [Joubert] got a puncture about 20 kilometres in so we had to chase back.” The pair caught their rivals for the overall victory, the Darkhorse Wheels TIB/Drivechain Academy and Valley Electrical Titan Racing teams after a frantic 10 kilometre pursuit.

“I don’t know what happened, it was on a flat road” Joubert laughed, the stress of the stage now over. “Then a few kilometres later we nearly hit a cow. It was almost like someone put a hoodoo on us” he joked. Through the rocky Karoo section the three teams worked together only for Imbuko Giant to show their superior conditioning on the Anne’s Villa climb after 50 kilometres of racing. 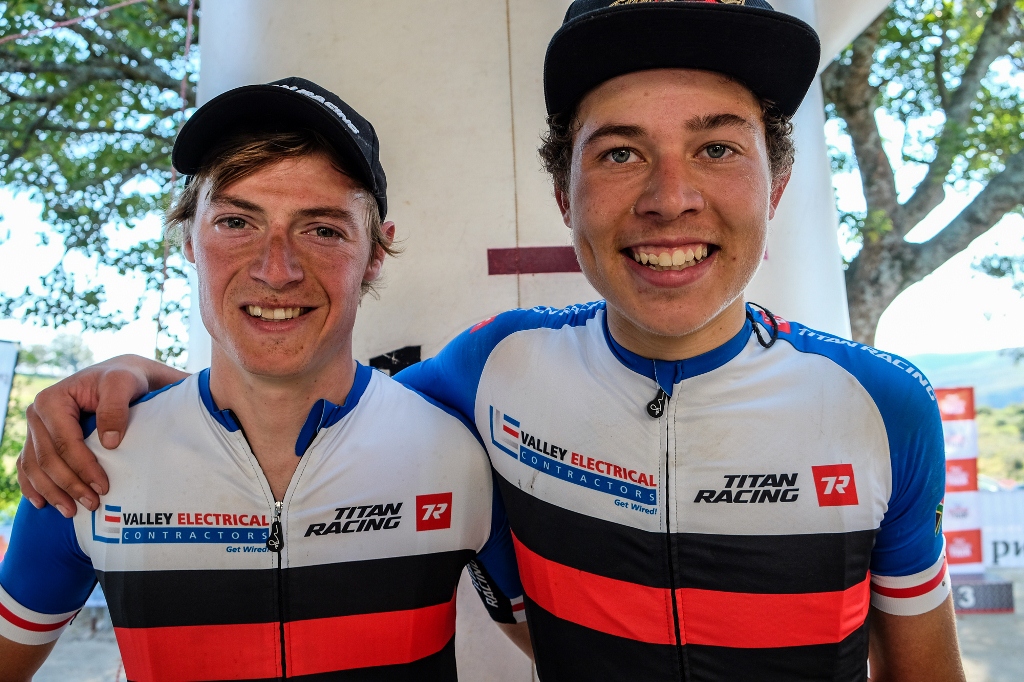 Joubert and Castens distanced Roussouw Bekker and Mark Fourie, of Valley Electrical Titan Racing, first and then dropped Andrew Hill and Tyrone White too. On the final climb of the stage, the 5 kilometre long, Elephant’s Truck ascent the pair continued to extend their lead. They eventually crossed the finish line in a time of 3 hours, 27 minutes and 3 seconds. Hill and White were second 7 minutes and 1 second later. Bekker and Fourie meanwhile endured a very challenging final 20 kilometres and eventually lost 13 minutes and 1 second to the stage winners.

The first woman across the line, though not officially a race finisher as she is taking part individually, was Robyn de Groot. The rider from George finished the stage in a faster time than she managed in 2018, when she raced with Ariane Lüthi. Thus adding more proof to the mounting evidence that she is well on her way back to peak form. She did however have one nervous moment when she very nearly crashed on the White Knuckles descent from the heights of the Zuurberg Mountains to the Karoo planes 300 metres below. “I ended up running it out” de Groot smiled. “There was a cameraman there so I really hope he got it.” 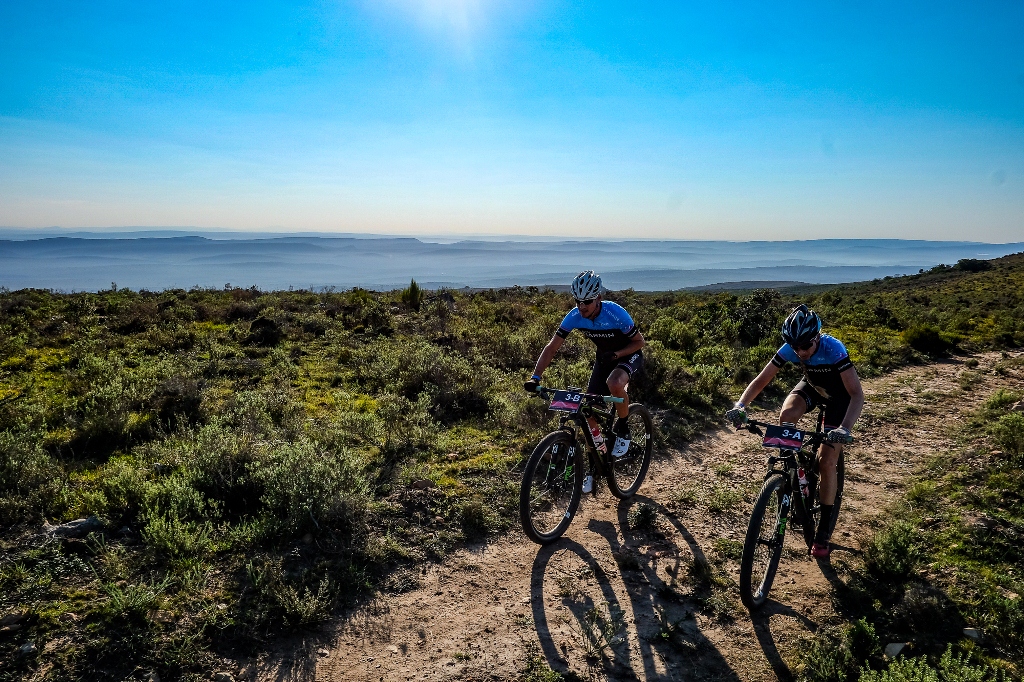 Ben Melt Swanepoel and Yolandi du Toit continued their mixed category dominance for the second day and now lead by over an hour. Photo by Zane Schmahl.

The mixed category saw the Team Garmin duo of Du Toit and Swanepoel continue their dominance. While behind them; the Team Prentis and Victory Hill squads, who had been separated by only 9 seconds the day before were less evenly matched on Stage 2. Liesel and Ken Prentis finished the stage in second place, 9 minutes and 44 seconds ahead of Hidegarde Cronje and Victor Terblanche. It remains all to race for though, on the final stage.

In the women’s category the two team tussle for PwC Great Zuurberg Trek honours once again went the way of the Aspire Livefit/Thule team. Campbell and Scowby completed the stage in a time of 5 hours, 5 minutes and 13 seconds. They now hold a significant advantage overs Eleanor Brummer and Andrea Duffin, which only a catastrophe could dent. 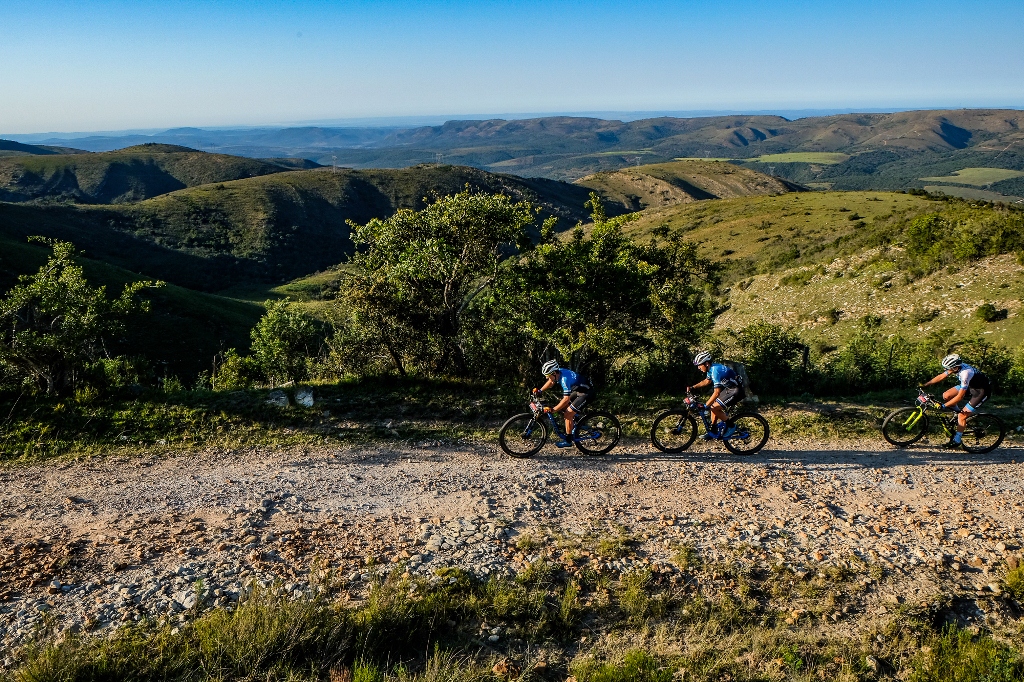 After their early puncture Marco Joubert and Nicol Carstens found themselves, briefly, with the Bike Shop Plett/SCOTT team for company. Photo by Zane Schmahl.

The final stage of the race, takes in the spectacular Hayterdale Trails. The 50 kilometre route may only include 1 200 metres of climbing, but that climbing is back-loaded. The day’s most significant ascent takes place in the final 10 kilometres when riders will have to grind up the Zuurberg Pass. Before that though they will be treated to trails like Zorr’s Rollercoaster, Corkscrew and Rabbit Hole. Plus, the very alluringly named Miles for Free section of trail.

There has not been much of that in the PwC Great Zuurberg Trek, but that is what true mountain biking is all about. Overcoming challenges and enjoying the exhilaration of hard-earned downhill singletracks. To revel in the thrills and spills of the race from the comfort of home, mountain biking fans can follow @zuurbergtrekker on Twitter and @great_zuurberg_trek on Instagram. Additionally they can like the Great Zuurberg Trek Facebook page and visit www.greatzuurbergtrek.co.za for more information. 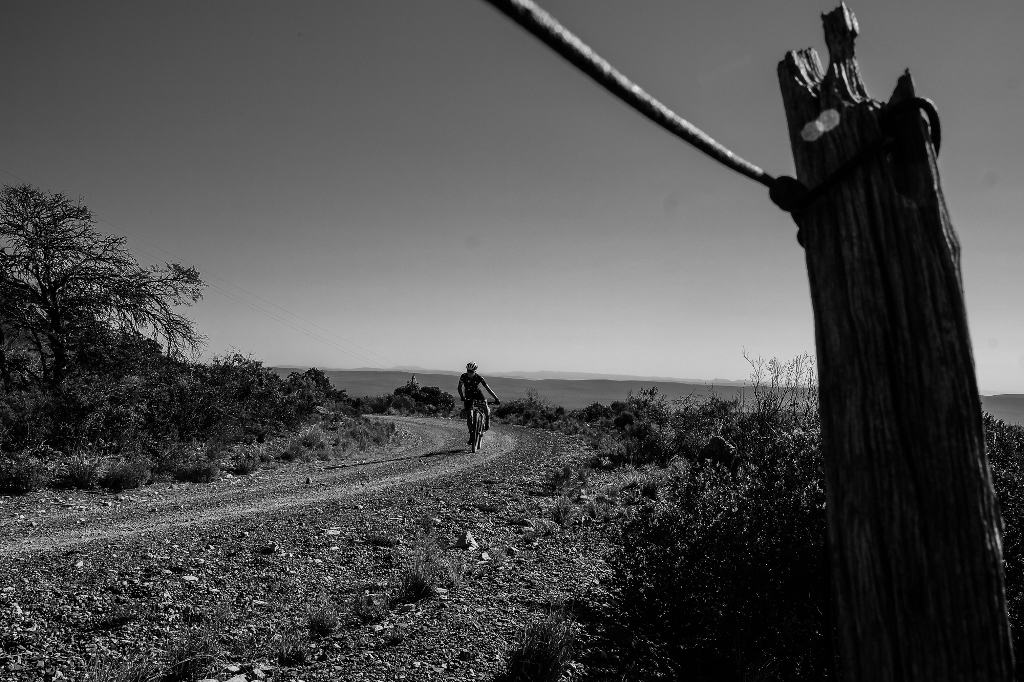 Robyn de Groot continued her return to racing form by finishing just behind the leading three men’s teams again on the day. Photo by Zane Schmahl.