The 2019 Trans Baviaans, ultra-endurance mountain bike race, is set to take place on Saturday the 10th of August. Among the 1 250 riders who will roll across the start line in Willowmore, on their way to Jeffery’s Bay are Mike Posthumus, Derrin Smith, Sarah Hill and Theresa Ralph. Though the quartet of riders from dormakaba and Galileo Risk headline the field their race through South Africa’s largest wilderness area, the Baviaanskloof, will be anything but simple.

Over the 230 kilometre long route, with includes 2 850 meters of climbing, there are innumerable opportunities for misfortune. Punctures, crashes, nutrition and most pivotally – the elements – could all play their part in determining the race outcome. How each team, of two to four riders, overcomes the adversities the Baviaanskloof directs at them will ultimately decide the winners.

“The roads aren’t in as good a condition as they were last year,” race director, Zane Schmahl warned. “After the recent rains in the kloof the roads department have been grading, but the surfaces will probably be less smooth than last year’s near perfect condition. On the other hand, the water levels are relatively low. We expect about six water crossings. So for the less competitive riders the risk of a long day with wet feet is lower than usual” Schmahl added. 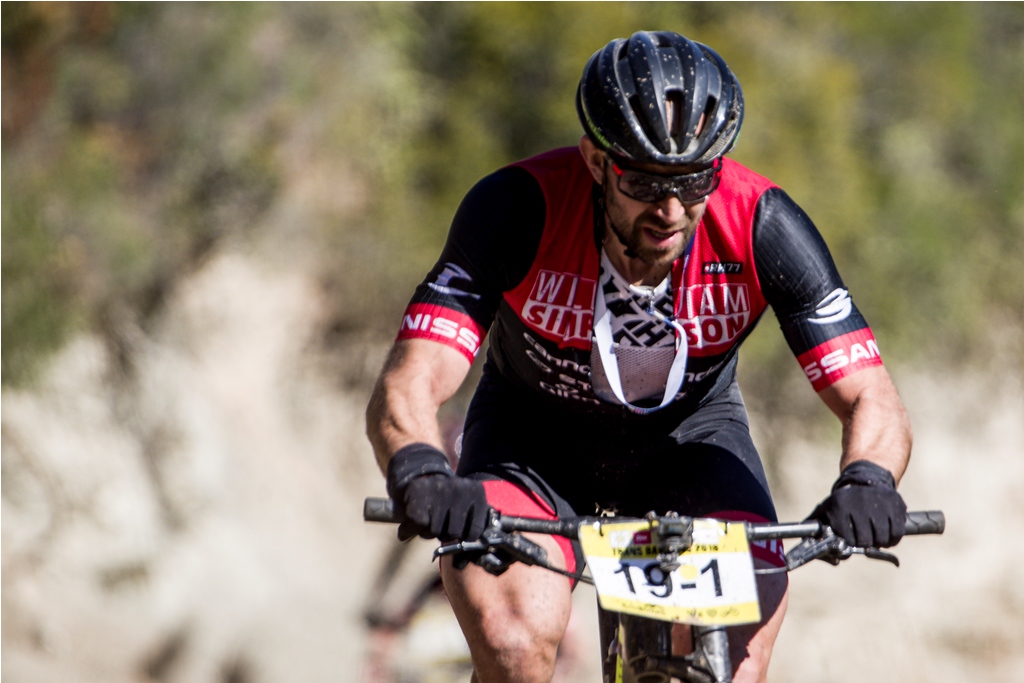 Mike Posthumus raced to third, alongside Derrin Smith in the 2018 Trans Baviaans, beating the setting sun by 3 minutes. Photo by Jacques Marais.

In 2018 three teams broke the historic 8 hour barrier for the first time. Co-race winners Insect Science/Garmin (Ben Melt Swanepoel and Timothy Hammond) and DSV Pro Cycling (Gert Heyns and Arno du Toit) did so by a massive nine minutes. Their shared record thus stands at 7 hours, 51 minutes and 6 seconds. Posthumus and Smith, were third last year, also beating the 8 hour mark and finishing before the sun set on the Fountains Mall, in Jeffrey’s Bay.

It would take a remarkably ride to match their time of 7 hours and 57 minutes in 2019 but Posthumus is as bullish as ever. “I’m so excited to have the opportunity to race with Derrin again, this year representing Team dormakaba” he began. “We will always give our absolute everything to go as fast as we can on the day. From previous experience, a fast day is more determined by a positive fast start and the wind direction on the day. To me, those factors are more important when trying to break 8 hours. We can’t do anything about the weather, so we will focus on influence the factors under our control” the doctor of Sport Science related. 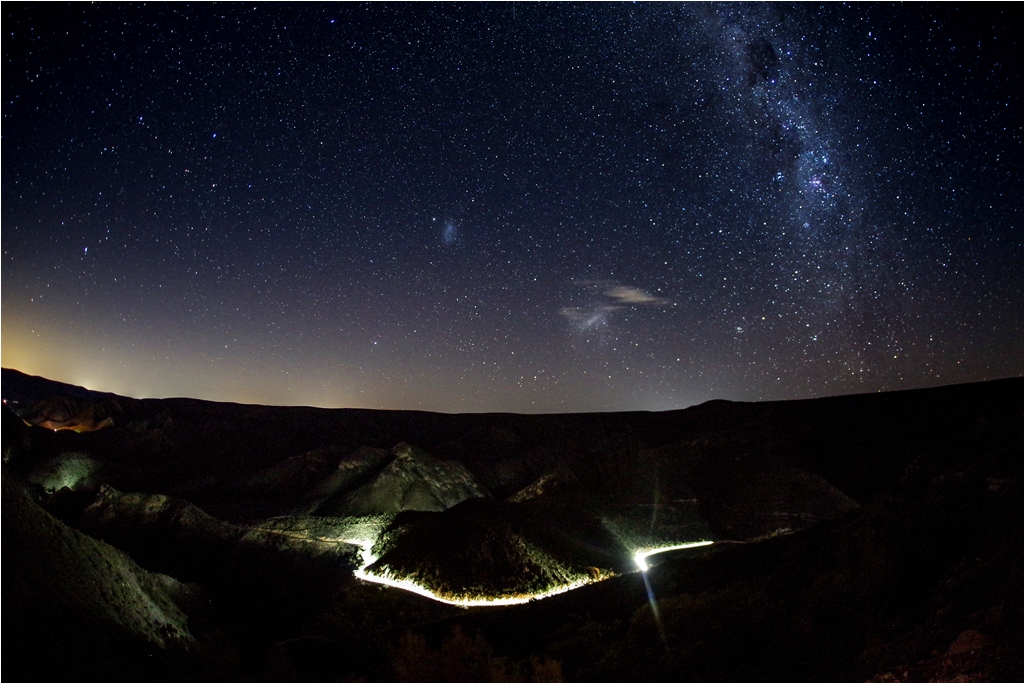 By night the trials of the Trans Baviaans are illuminated by one thousand bicycle lights. Photo by Jacques Marais.

Turning his attention to advice to his fellow Trans Baviaans riders he added: “The biggest tip I could give anyone is to remember that it is only a 140 kilometre race. See the first 100 kilometres as neutral. It is mostly flat and fast riding so save your legs for when they will be needed. Imagine this section as a transition to the start of the race.” 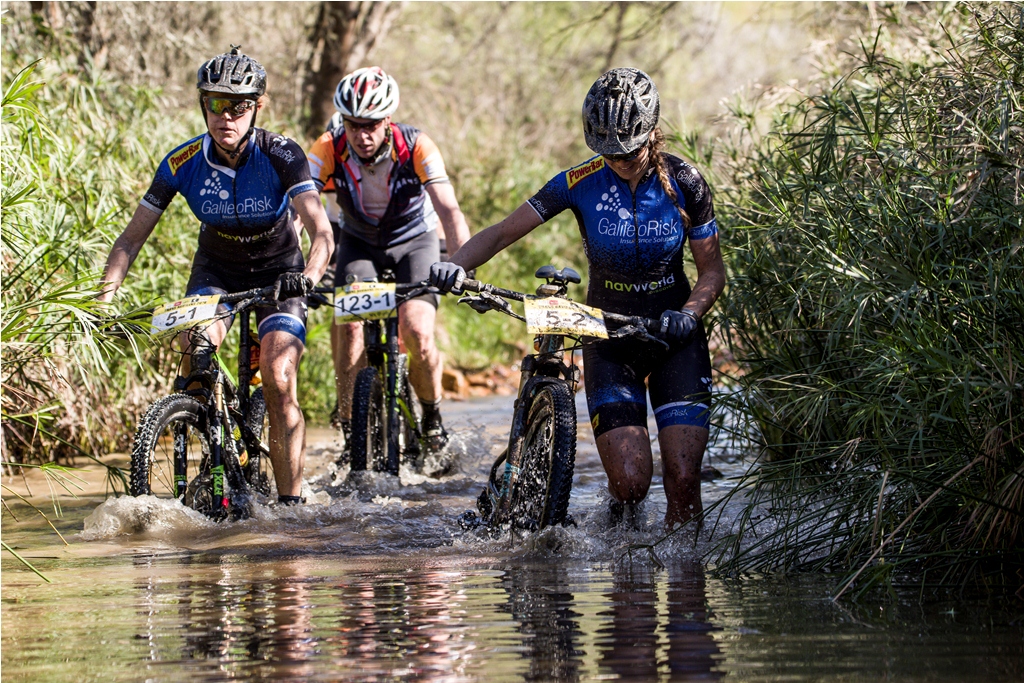 Sarah Hill (right) and Theresa Ralph (left) will start their third Trans Baviaans as a team on the 10th of August this year. Photo by Jacques Marais.

Two-time Trans Baviaans champion, and women’s course record holder, Hill will once again partner four-time winner, Ralph. The Galileo Risk pair has made the Trans Baviaans one of their key races over the last two seasons. The long hours spent on the bike in the race have helped forge their partnership. “Teamwork is way more than simply riding together” Hill pointed out. “Both parties are going to go through ups and downs and it’s really important to acknowledge and respect the spaces you go through. Encouragement and support is essential, and both of you coming into the race with the same goal is vital” she advised to her fellow competitors.

“Working with each other’s strengths is also critical. If you have a diesel engine for a partner (i.e. Theresa), then the long power sections are her thing. She will look after me and I will make sure I hold that wheel! On the climbs things start to even out and that’s where I can set the pace, and make sure we don’t go over our limits… You remind each other to eat eat eat, and drink drink drink, and then congratulate each other on every mile stone of the race. For us, it’s the stickers from the check points! My favourite thing is the sense of humour prep. T (Theresa Ralph) and I have this thing, where we both have one hilarious lame joke. We don’t tell each other until we’re on the Never Ender (when you need that sense of humour check!). We reveal the jokes when we think the other partner is suffering the most. Trust me… It is a mental game changer” Hill laughed.”

“This race is a must on our calendar” Hill continued. “It marks our Team-Aversary which is so special. Theresa and I have grown from strength to strength, and this is the reminder of where it all started. It holds such a special place in my heart, and reminds me of the value of teamwork, and the practice of suffering with a purpose. We are coming back to defend our title of course! If there’s a tail wind, we’re going for a new record. Otherwise we will race as fast as we can to test each other for the upcoming events.” 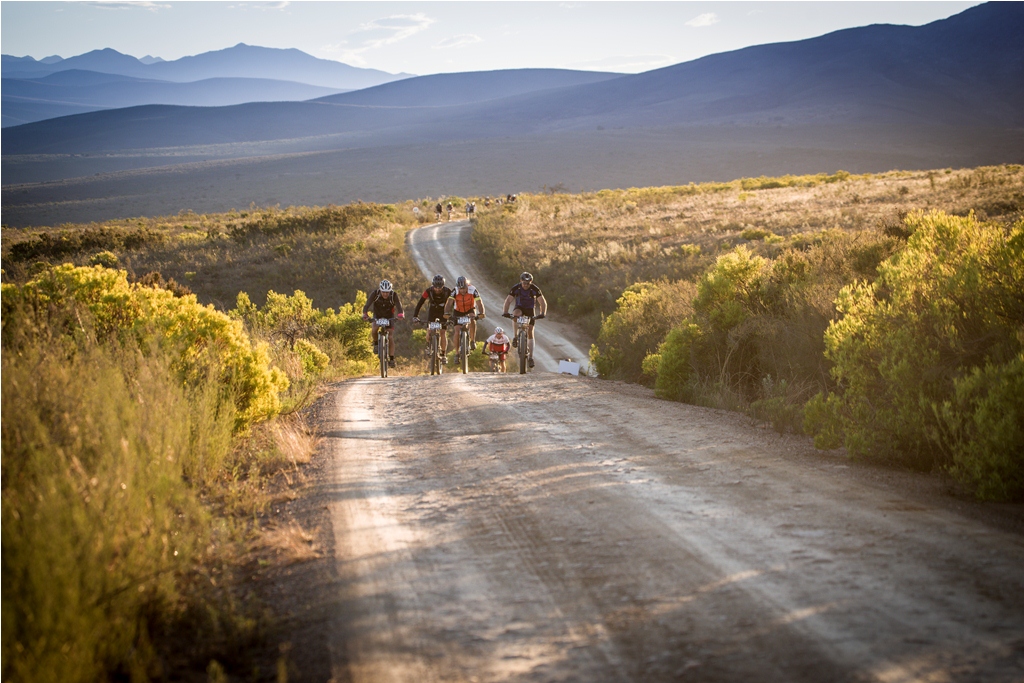 From Bergplaas, at the summit of the Mother of All Climbs panoramic vistas extend over the Baviaanskloof to the North West and East towards the ocean and the finish line nearly 100km away. Photo by Jacques Marais.

“The distance is quite intimating” Hill, who is more frequently seen racing cross-country events than ultra-marathons confessed. “And I think that’s why I love it. It’s our mid-season ‘check in’ where we come and reset our minds for the rest of the year to come. We get such a mental strength benefit racing such an ultra-endurance event, that we carry through onto all the stage races we do until December.”

Outside of the men’s and women’s races the mixed category race could be the most fiercely contested in years. With serial champion Yolande de Villiers on the mend after a serious leg break but not yet able to return to competitive riding and her long-time partner Neill Ungerer also absent the category victory is up-for-grabs. The pre-race favourites are the local team of Kevin Taljaard and Anriette Schoeman. Taljaard, who owns East Coast Cycles in Jeffrey’s Bay, is no stranger to Trans Baviaans having won the second weekend’s repeat event alongside De Villiers on two occasions. He also placed second behind De Villiers and Ungerer with Siska van der Berg in 2018. For 2019 he will line up alongside one of the country’s most decorated cyclists, in Schoeman, but one who is a Trans Baviaans novice.

Schoeman’s inexperience could open the door for the Enduroplanet team of Tanya Kirstein and Christo Roos. The pair was third beind Taljaard and Van Der Berg last year, and will be looking to implement the lessons they learnt during that experience in 2019. 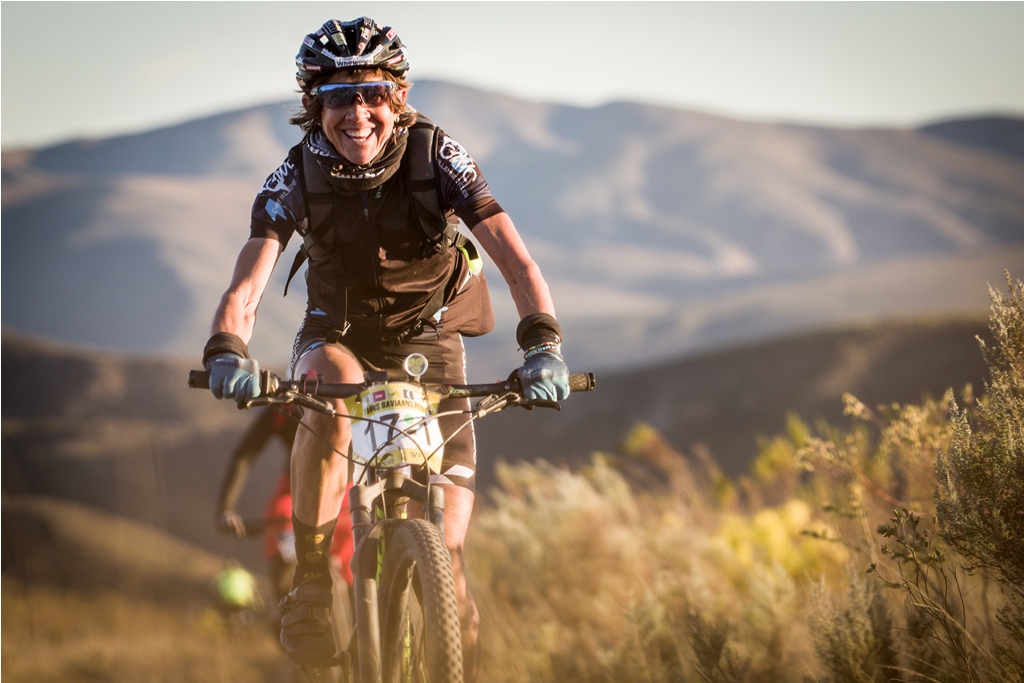 Hannele Steyn smiling her way to the summit of the Mother of All Climbs, a feat that not many riders manage. Photo by Jacques Marais.

Posthumus and Hill both referred to the wind as a determining factor in any potential record attempts. With the race a week away the long-term weather forecast is pointing towards a challenging day on the bike. Riders can expect tail winds through the Baviaanskloof but rising headwinds once they pass Check Point 5, at the Hadleigh Pack-house 172 kilometres into the race. The final 60 kilometres, including the ascent of the infamous Never Ender climb could thus be undertaken into a headwind, with the added discomfort of a slight chance of rain in the late evening.

While the challenging weather and road conditions will make the going tough for the riders it should ensure an exciting race for mountain biking fans. Friends, family members of riders can follow the event on social media, where they will be able to access all the news from the race. Updates from the race will also be available; from selected WiFi hotspots on the remote route, on the Trans Baviaans website, www.transbaviaans.co.za, and EcoBound Twitter handle @EcoBoundEvents. Meanwhile the event’s Facebook page, Trans Baviaans, will once again feature videos, rider interviews and amazing photos from the Jacques Marais; as will the Instagram handle, @transbaviaans.