Nicholas and Alexandra Quénet set a new course record, in windy conditions, on their way to victory in the 2019 Torpedo SwimRun Cape; on Sunday, 17 November. The siblings, from Worcester, both have triathlon pedigrees and utilised the down-wind swim conditions to blitz the rest of the field. In so doing they became the first mixed category team, made up of one male and one female athlete, to win a Torpedo SwimRun South Africa event overall.

The first men’s team across the line was that of Dylan Pivo and Riaan Shaw, 2 minutes and 8 seconds slower than the Quénets’ winning time of 1 hour, 50 minutes and 56 seconds. While the women’s title was claimed by the Stellenbosch Triathlon Squad combination of Louisa de Jongh and Vicky van der Merwe. De Jongh and Van Der Merwe also bettered the women’s course record, which Van Der Merwe had played a part in setting in 2018. Their winning time was 2 hours, 9 minutes and 14 seconds. The record-breaking times came somewhat as a surprise to the Torpedo SwimRun Cape organisers as they had spent the week before fearing for the worst, when the first long rang wind-predictions were made.

“I spent half the night lying awake listening to the wind howl” Richard McMartin, of Torpedo SwimRun confessed. “But the weather on the day was actually fine. The wind swung to a strange south-south west, which provided a perfect tail-wind, and the ocean was nearly mirror flat.” McMartin’s assessment of the conditions were echoed by Mzwakhe Nqavashe. 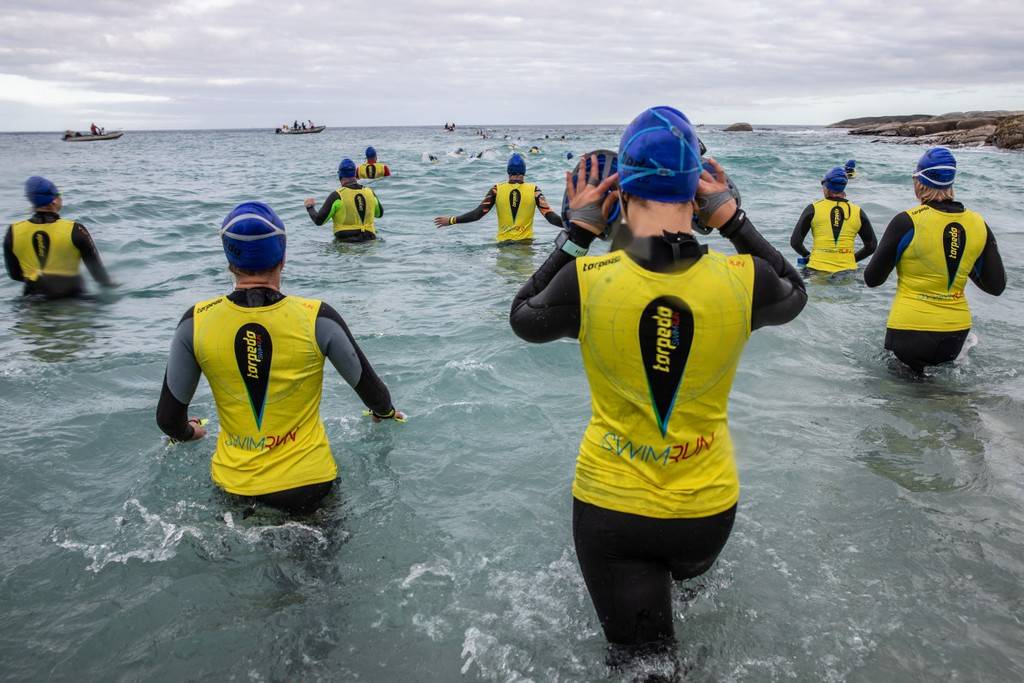 Taking the first plunge into the icy 9.8-degree waters of the Atlantic Ocean, at Sandy Bay, required some bravery during the Torpedo SwimRun Cape. Photo by Caleb Bjergfelt.

Nqavashe is the Chairperson: Safety and Security Portfolio Committee, City of Cape Town, and came to award the prizes to the podium finishers on Clifton Fourth Beach. “I was nervous about the wind yesterday, but now that I’m here today it looks like great fun. I will have to enter myself next year” Nqavashe laughed, undeterred by the cold looking athletes emerging from the water. After completing six swims, totalling 4 kilometres, in the 16-kilometre-long course it is unsurprising the competitors finished a little chilly.

The race started in batched waves, with the slowest self-seeded athletes starting first at 06h45. From the start line on the ridge above Sandy Bay the Torpedo SwimRunners sprinted down to Cape Town’s only nudist beach for the first swim. A swim, a run, an adrenaline inducing rock jump and another swim took the competitors to Llandudno Beach. There the longest run leg of the race began, which included a sapping climb from sea level to Victoria Road high above. With no transitions, between the swimming and running legs of the race, everything each athlete wanted with them they had to carry, all the way to the finish line at Clifton Fourth Beach. This makes gear choices key to the format.

Fortunately sponsors PowerBar, Red Bull and Bootlegger Coffee Company provided three energy points along the route; so, it was not necessary to swim or run with fluids or race food. Some competitors chose to use modified pull buoys to aid their flotation, while others also used hand paddles and even fins. In the South African series’ other events – in Wilderness, the Cradle of Humankind and Val de Vie – there is the option to compete without a wetsuit on. Though due to the 9.8 Degree Celsius water temperature being read by the safety boat, while it was anchored off Sandy Bay, wetsuits were essential. 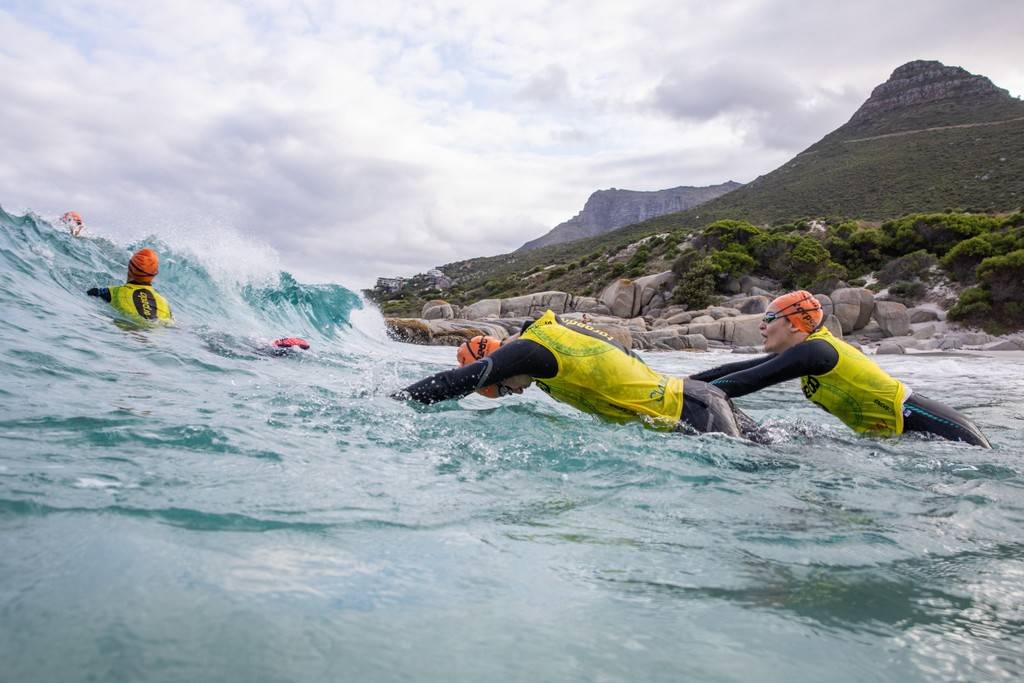 The beauty of the Torpedo SwimRun Cape route is unquestionable. Photo by Caleb Bjergfelt.

The sight of runners in wetsuits bounding down Victoria Road, was a strange one for the usual Sunday crowds of cyclists and road runners on that busy coastal boulevard. “SwimRunning is one of the fastest growing endurance sports in the world and the City of Cape Town is proud to host the Torpedo SwimRun, an event which not only shines a spotlight on Cape Town but also showcases what Cape Town has to offer in adventure sports” Alderman JP Smith, Mayoral Committee Member for Safety and Security, pointed out. “The Torpedo SwimRun assists us in showcasing the city’s beautiful natural environment while also promoting the healthy outdoors lifestyle enjoyed by many of residents.” Though judging by the looks on the faces of passers-by not everyone is quite ready to make the plunge into the icy Atlantic.

“The water temperature wasn’t too bad,” one half of the men’s winning team, Pivo reassured. “Once we got into that icy water in Sandy Bay I realised we would have to just go full gas. While we were swimming, except for on the 1.3-kilometre-long leg from Oudekraal to the Red Bull Energy Point at the Twelve Apostles, I was warm enough. It was just on that long one where I felt my core temperature start to drop. But the runs were great and I never got hot in my wetsuit, because the cold water never fully drained out of it.” 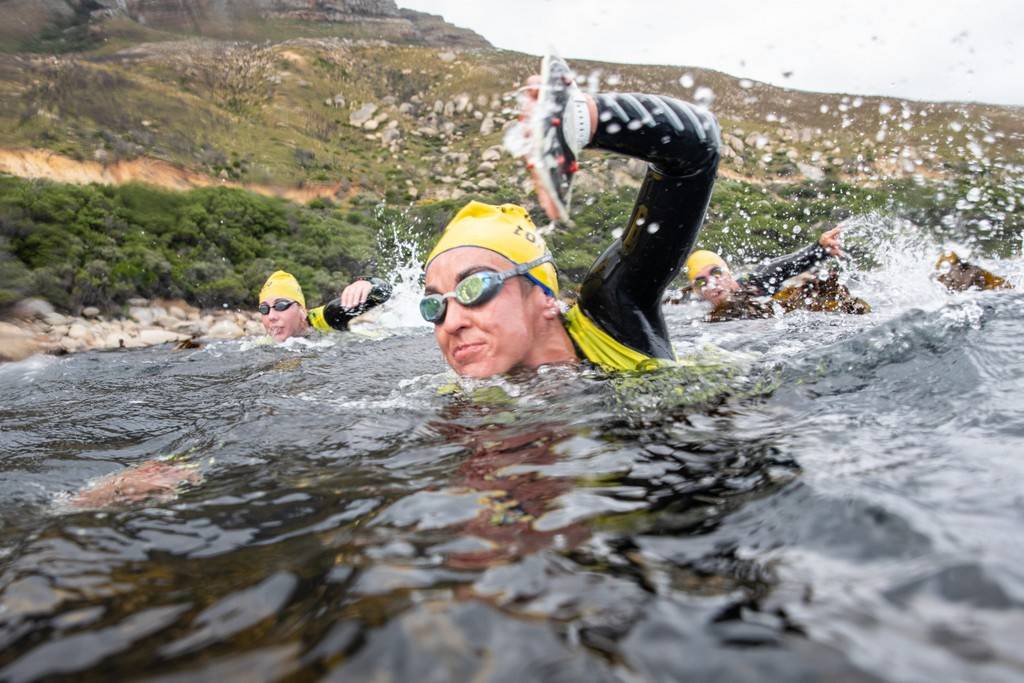 “It was really fun” women’s race winner De Jongh grinned, standing alongside relative SwimRun veteran Van Der Merwe. “It was my first one. Vicky asked me to join her and I must say I had a great partner.” “It was awesome” the now two-time Torpedo SwimRun Cape champion Van Der Merwe added. “The water was cold. I found it colder than last year. But it was still great fun. We had a plan going into the race, after last year I thought that this is a real swimmer’s course. So, I chose the strongest swimmer I could for a partner and that really paid off.”

Strength in the swim certainly paid off all-round for the top performing teams and for none more so than the Quénets. The brother and sister duo had nearly not raced together, as Alexandra revealed: “We went back and forth a bit, toying with the idea of racing separately in single sex teams before we settled on racing together in the mixed category. It was Nick’s first race back after a long injury lay-off and we went in just trying to see what we could do. But still he’s very fit and I had to push hard to hang onto his feet.”

When asked when they realised that they could make history by winning the overall title, as a mixed team, Nicholas took up the tale. “We always have high expectations of ourselves” he said. “Going into the race we thought we had a chance, but we also knew it was going to be really tough. After the first swim we realised we could be in with a chance of winning overall. We pushed on from there, working the swims and being a little more conservative on the runs.” 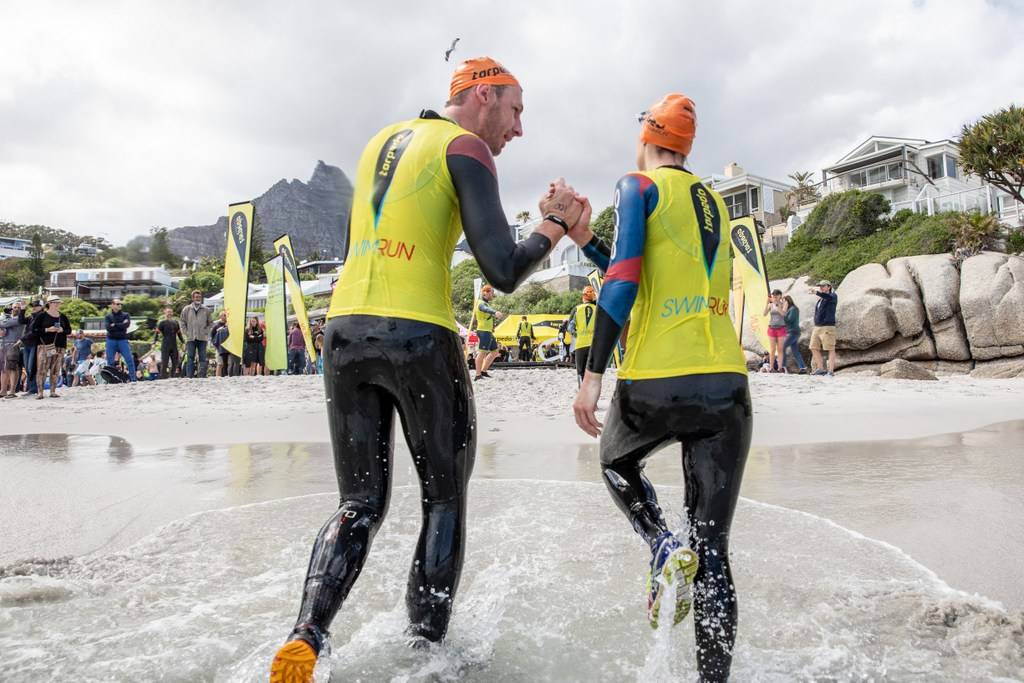 Taking part in teams of two, the dynamic of working together to conquer the 16km long course added an additional dimension to the Torpedo SwimRun Cape event. Photo by Caleb Bjergfelt.

Elaborating further Alexandra said: “We made some good gains on the longest swim. Nick carried my shoes for me and I think that paid dividends in the end. Obviously, I’m not as strong as the guys on the run, but on the swim I could really push nicely.”

While the Quénets and the other podium finishers were receiving their prizes, courtesy of Bootlegger Coffee Company, the next generation of Torpedo SwimRun competitors were training in the icy Atlantic. The Clifton Surf Lifesaving Club’s nippers showed as little fear for the cold water as the SwimRunners had earlier in the day. Though it may be a while before they take on the full Cape course.

In a few years’ time they may be ready for the Flow events, the shorter and easier, races in the Torpedo SwimRun South Africa calendar. The Flow races can be undertaken individually rather than in teams and with events in the lakes, rivers and dams of Val de Vie, Wilderness and the Cradle of Humankind they lack the intimidation factor of an ocean swim. Next up is Torpedo SwimRun Val de Vie – which totals 10 kilometres in distance and includes six swims, the longest of which is 400 metres long – on the 1st of February 2020. To find out more visit www.torpedoswimrun.com. 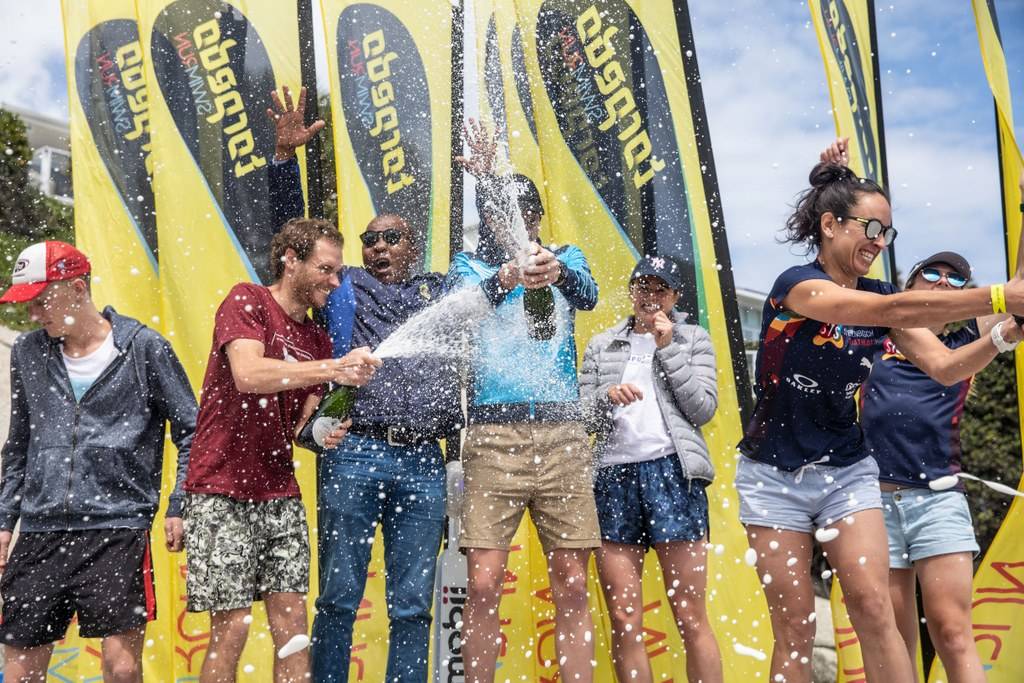 Methode Cap Classique showers on the podium for the winning men’s, women’s and the overall victors; category team of Nicholas and Alexandra Quénet. Photo by Caleb Bjergfelt. 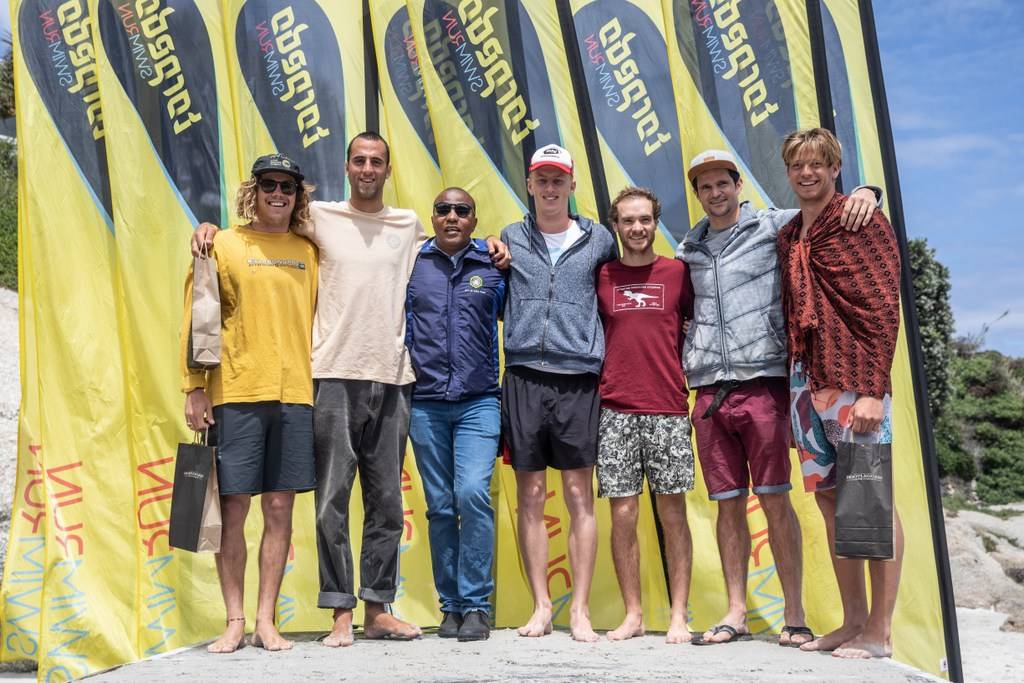 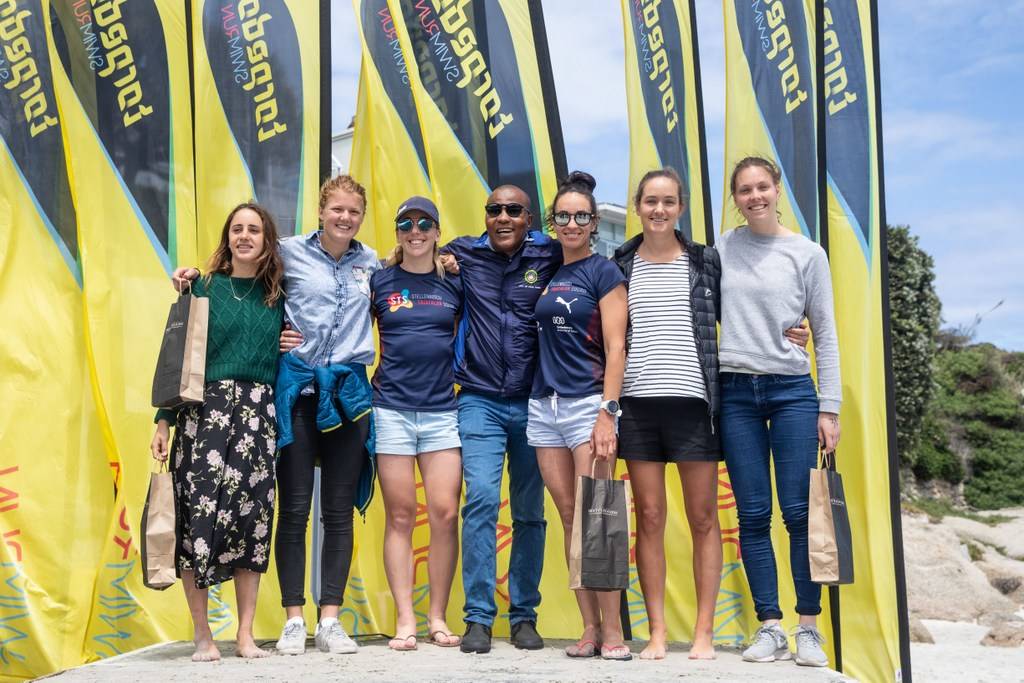 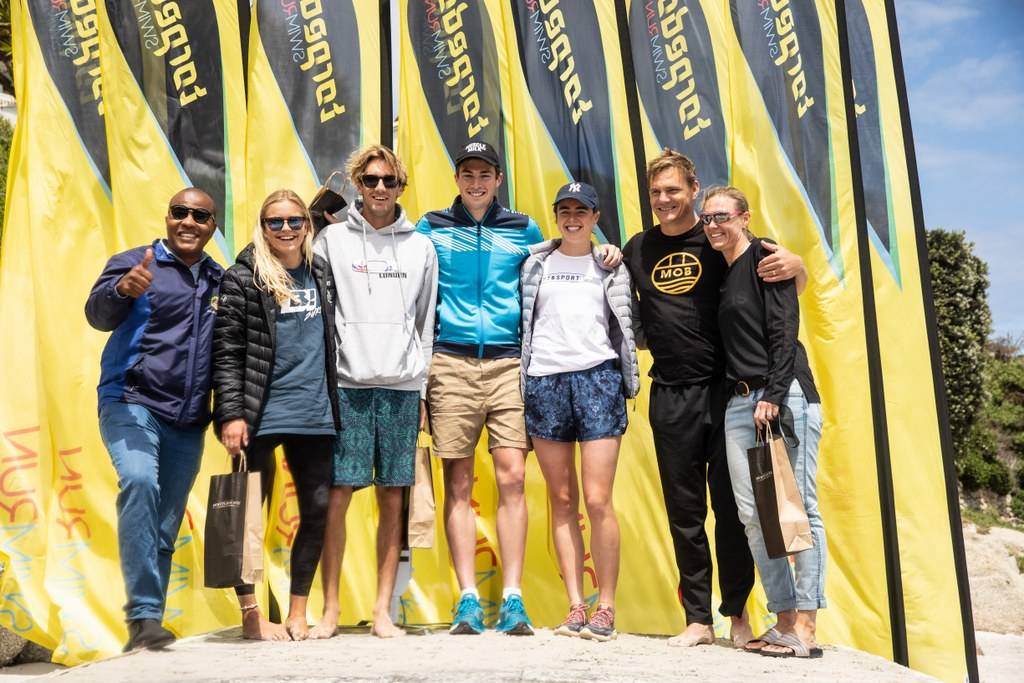 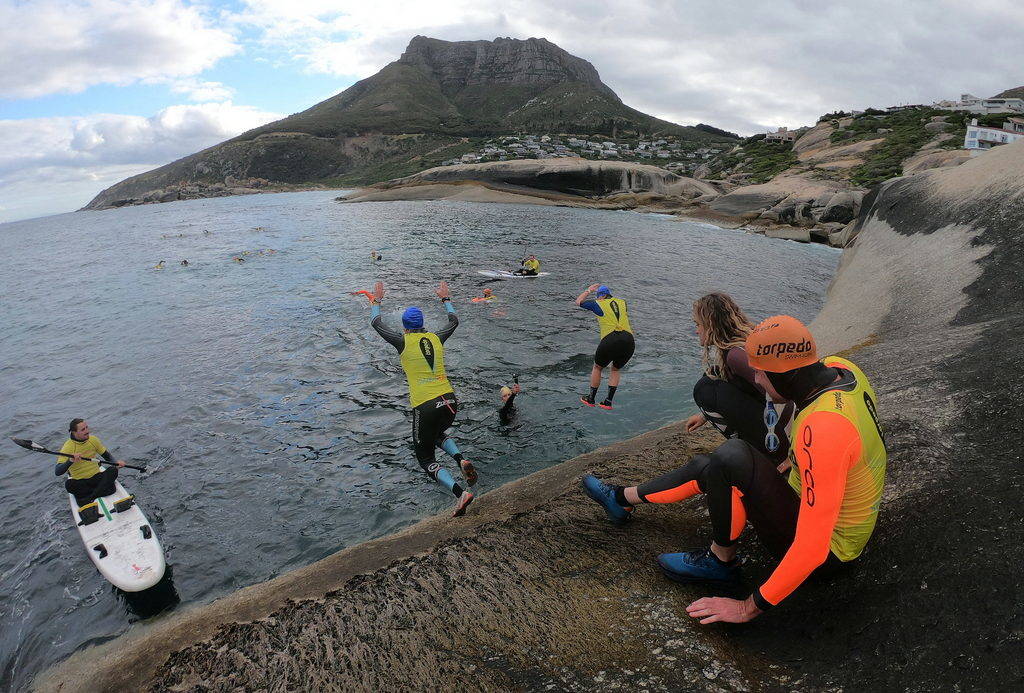 The Llandudno rock jump ensured an adrenalin spike to kick off the second swim leg of the 2019 Torpedo SwimRun Cape. Photo by Seamus Allardice.