Stage 3 of the 2020 Momentum Medical Scheme Tankwa Trek, presented by Biogen, saw the race’s sixth new pairs of stage winners crowned. The Queen Stage, which took in the iconic Merino Monster climb on Saturday, could prove decisive in the final general classification reckoning. Cannondale Factory Racing and dormakaba blue raced to the King and Queen of the Mountain titles, respectively, before securing stage wins too.

Manuel Fumic and Henrique Avancini’s stage win will have no impact on the overall classification but the battle behind them for second could well have determined on whose shoulders the final First Ascent yellow jerseys will rest. The Bulls Heroes outfit, of Urs Huber and Simon Stiebjahn emerged victorious from a titanic battle with Sebastian Fini and David Nordemann. CST PostNL Bafang lost two minutes and two seconds with a puncture in the final 5 kilometres of the day.

The stage began with a sprint to the DUTOIT Drop singletrack, a twisting 4-kilometre descent from the Koue Bokkeveld to the Ceres Valley. DSV Pro Cycling’s Gert Heyns led the elite men through the trail, but once in the valley below the leading men regrouped into a peloton of general classification contenders. Head winds across the valley ensured the next 20-odd-kilometres were ridden as a group. Only the lower slopes of the Theronsberg Pass could begin to split the field. 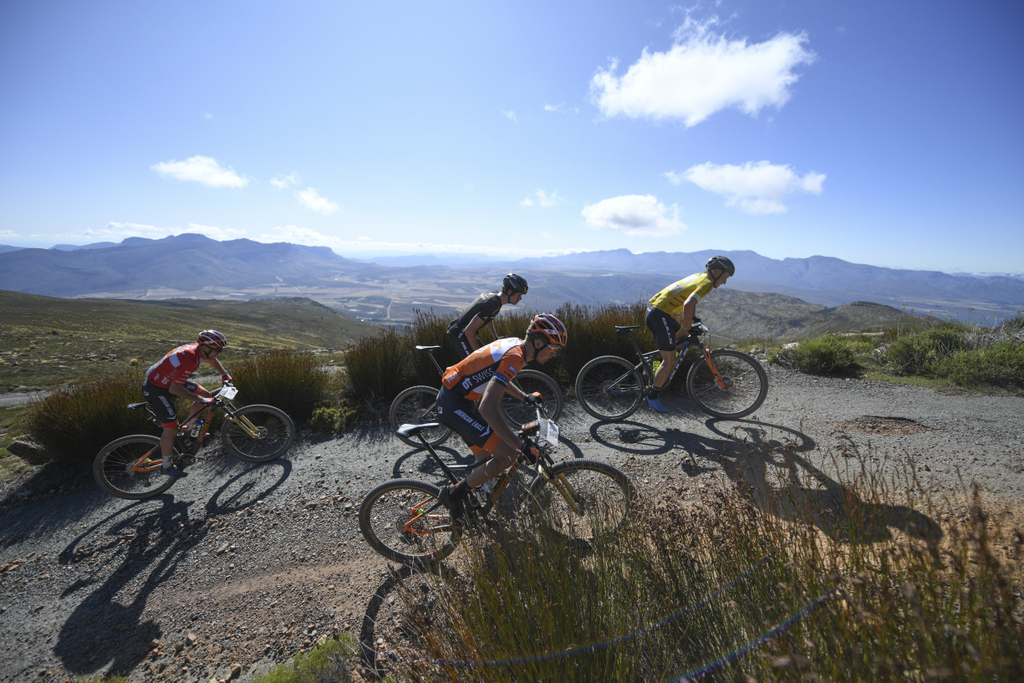 The general classification battle between the Bulls Heroes and CST PostNL Bafang continued on Stage 3. Photo by ZC Marketing Consulting.

In a tactical master-stroke the Bulls Heroes were aided by the Bulls Youngsters. Martin Frey set a pace on the Theronsberg which kept Fini and Nordemann on the back foot. Then on the Merino Monster, Simon Schneller took over the pace-making duties from his teammate. Schneller’s excellent work whittled the lead group down to just his Bulls Heroes stablemates, Cannondale Factory Racing and PYGA EuroSteel. CST PostNL Bafang were stranded 30 seconds back and had to fight all the way to the summit to keep the yellow jerseys in sight.

“Simon and Martin were fantastic today” Huber praised. “It was a big help having them with us for the climbs and then on the descent having Simon just behind us gave us security, knowing assistance was so close. We know from the past that the descent from the Merino Monster is very technical and you can puncture very easily. So, we rode it safely.”

Huber, Stiebjahn, Fini and Nordemann entered the final few kilometres neck-and-neck. “With about 5 kilometres to go I had a rear wheel puncture” Fini explained. “It is unfortunate but that’s racing. Tomorrow we try again. The gap isn’t that big.”

Fumic and Avancini crossed the finish line, at Kaleo Manor first. They were followed across the line by Huber and Stiebjahn. Fini and Nordemann were third on the day. The stage result means that the Bulls Heroes take a two minute and two second lead into the final stage. CST PostNL Bafang have it all to do, on a stage not suited to making up large time deficits. Tristan de Lange and Alexander Miller, of DANSTE/Megatech maintain their third position overall, despite looking in difficulty for the first time in the race. 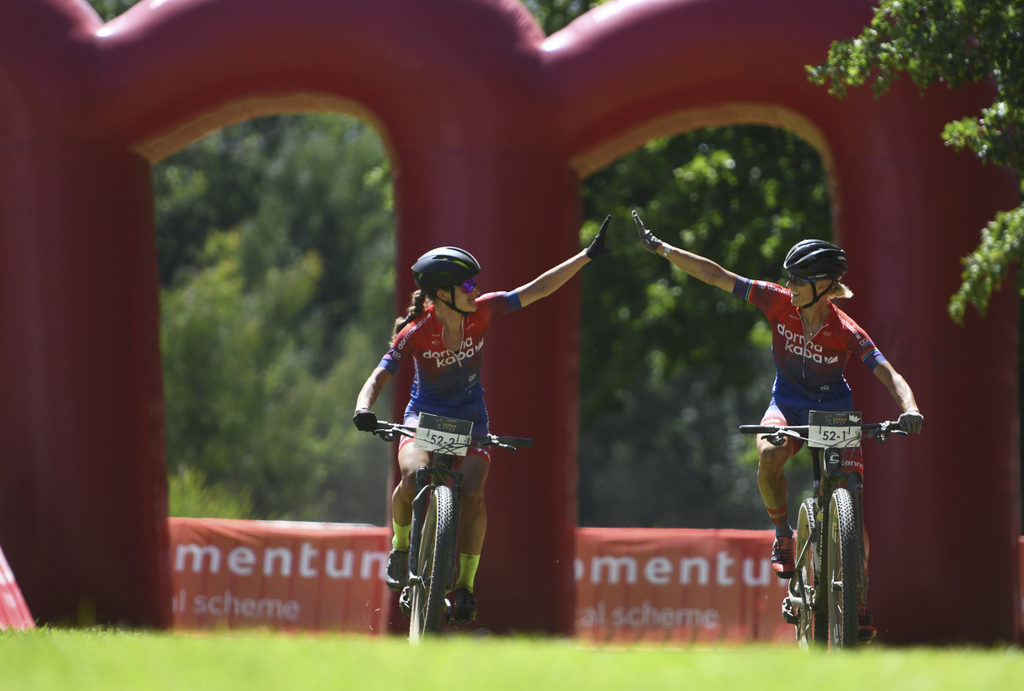 In the UCI Women’s race Fairtree’s Nadine Rieder was once again the main protagonist. She put Faces CST’s Mariske Strauss, in particular, under pressure on the Theronsberg Pass climb. That left dormakaba blue, GB Cycling and Fairtree at the front of the women’s race as they neared the foot of the Merino Monster.

Isla Short and Annie Last, of GB Cycling, were the next to drop off the pace. Then Jennie Stenerhag, Rieder’s partner could no longer match the tempo set by dormakaba blue. “I just rode my temp and kept Robyn [de Groot] and Adel [Adelheid Morath] in sight” Stenerhag recounted.

“On the descent that followed we caught up to dormakaba” Stenerhag added. “But then I saw Nadine [Rieder] looking at her tyres again and I knew she’d punctured. We stopped and plugged it. But it was still losing air so we had to stop again. That let Faces CST and GB Cycling pass us.”

“We went over the Queen of the Mountain point in the lead” De Groot added, from a dormakaba point of view. “And then took it relatively easy on the descent. You can make up lots of time, but it’s early in the season and you can also have a race ending mechanical or a really bad crash. From the foot of the descent we time-trialled to the finish. The fact that the run-in to the finish is nearly all singletrack really helped. It keeps it interesting and helps you push.”

De Groot and her dormakaba blue partner, Morath, became the third women’s team to win a stage of this year’s race. The result means that the women’s category echoes the men’s, where there have also been three different stage winners in three days.

Behind the day’s victors, Faces CST recovered to finish second. GB Cycling’s Short and Last completed the stage podium. Stenerhag and Rieder crossed the line in fourth position, but hung onto their first place on the general classification standings. Their lead however was slashed to just 33 seconds. dormakaba blue moved up from third to second, while Strauss and Lill dropped down to third; but reduced their deficit to the race leaders, to just 37 seconds.

The final stage is thus delicately poised, in the women’s race in particular. Mountain biking fans can watch the action unfold – on the race’s Twitter handle, @tankwatrek. Racing commences for the final time during the Momentum Medical Scheme Tankwa Trek presented by Biogen, at 06:30, on Sunday morning. Measuring 88 kilometres in length and featuring 1 250 metres of climbing, the final stage features the event’s most iconic trails; the routes through the wind weathered rocks of Houdenbek. 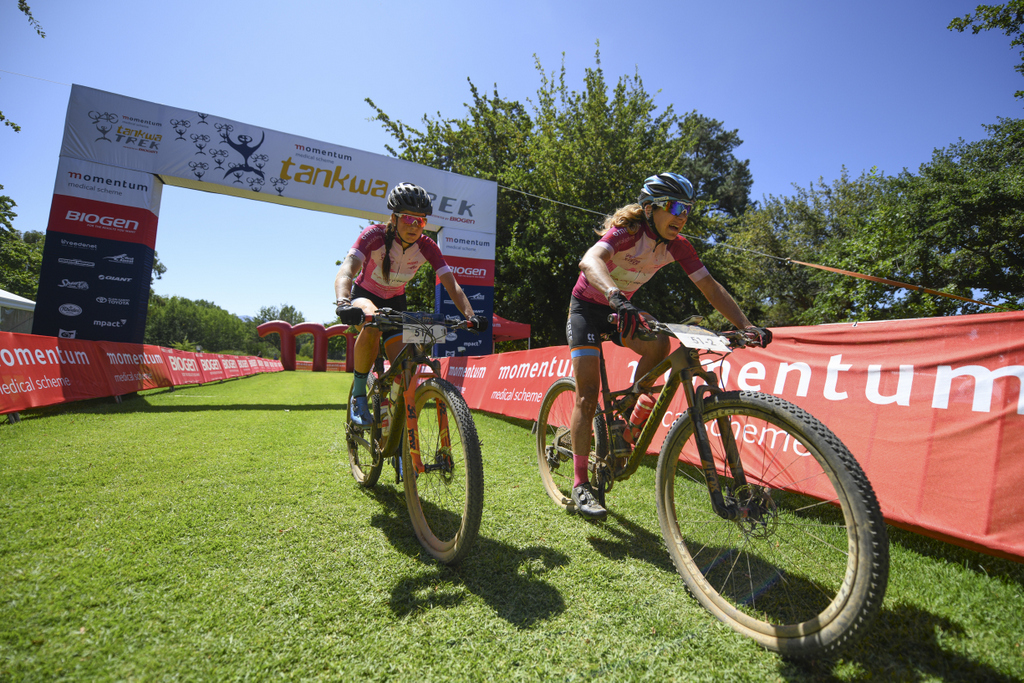 The Fairtee team, of Jennie Stenerhag and Nadine Rieder, clung onto the First Ascent leaders’ jerseys despite finishing fourth on the stage. Photo by ZC Marketing Consulting. 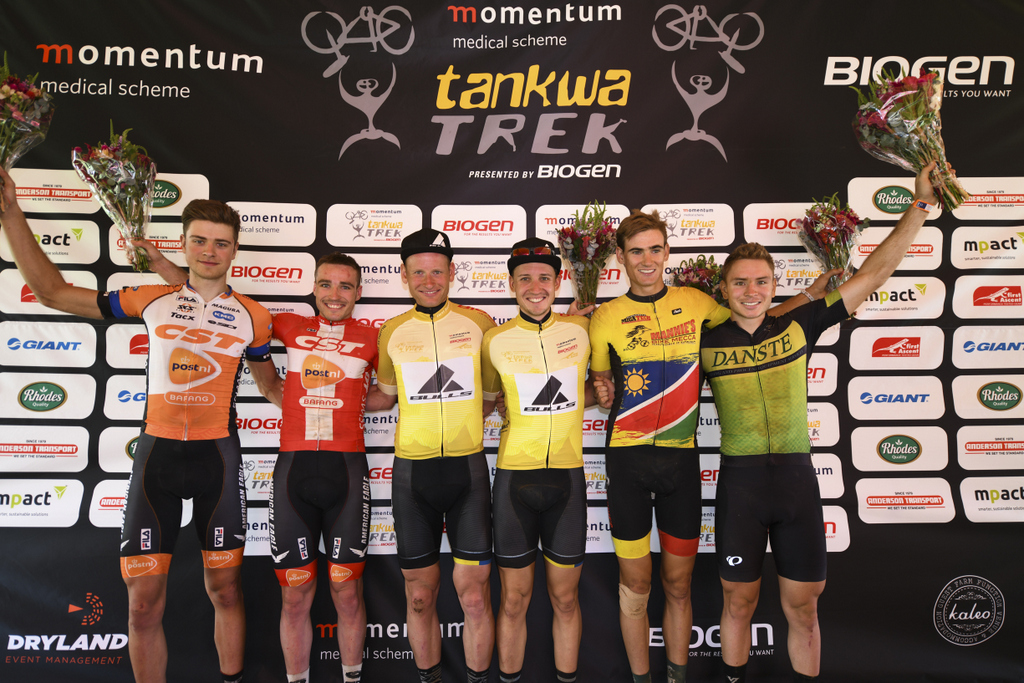 A puncture for Sebastian Fini (second from left), in the final 5 kilometres, meant that he and David Nordemann (far left) lost 2 minutes and 2 seconds to the Bulls Heroes (centre). DANSTE/Megatech remain third overall. Photo by ZC Marketing Consulting.