The 2020 Rooibos2Muisbos by Carmién cycling event brought over 900 riders to the Piekenierskloof area, on the 14th of November. Taking part in three events, over two distances, they were treated to cool weather, spectacular scenery and warm hospitality by a region eager to welcome visitors back after the travails of the Covid-19 lockdown. Due to the untimed nature of the event the focus was on riding for the joy of it; spending quality time with friends and family, on and off the bike.

De Tol – which hosts the farmstall and deli, a Carmién Tea shop and a wine tasting studio for Piekenierskloof Wines – provided the venue for registration on Friday afternoon. Following the mandatory health screenings; cyclists registered for Saturday’s rides before relaxing on the lush lawns. Sprawling old oak trees provided ample shade for those who arrived early while the Carmién Gin and Tea, Cederberg Craft Beer and Piekenierskloof Wines ensured people lingered. The hungry were satiated by De Tol’s famous roosterkoek and sosaties straight off the braai. 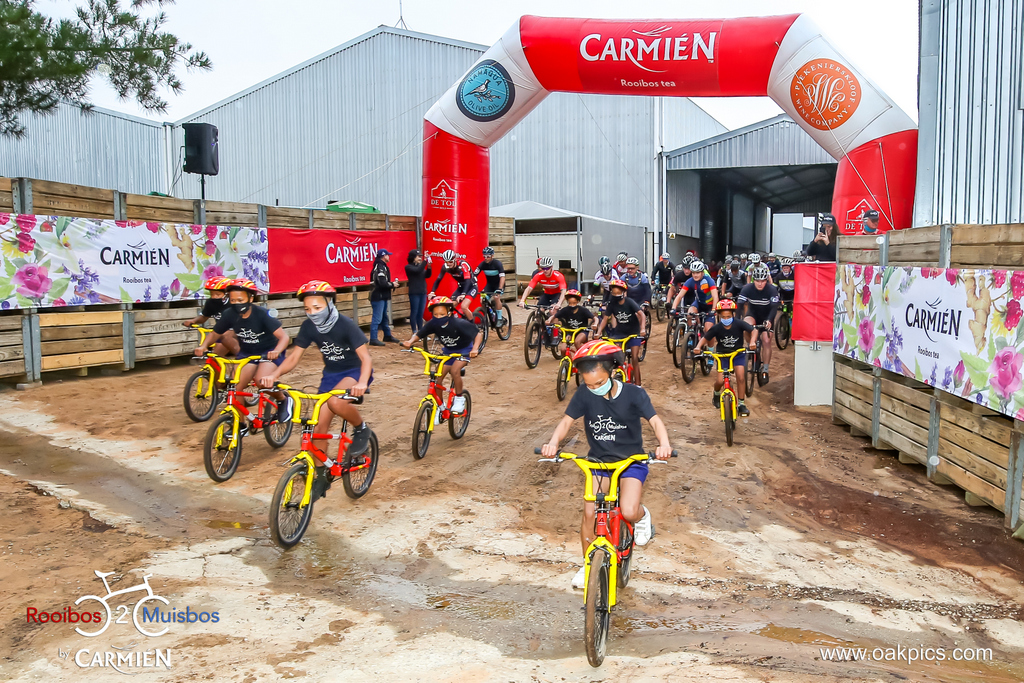 Young riders from the Bergendal Creche led the Rooibos2Muisbos by Carmién field out of the start chute on their new BMXs; donated by the event, BEN and Cycle4Life. Photo by Oakpics.com.

On Saturday morning the rising sun revealed overcast skies and the threat of a few drops of rain. With 107-kilometres of riding separating the assembled field from the finish line, in Lambert’s Bay, there were no complaints about the weather though. A bit more precipitation would in fact have been welcomed as the November sun had baked the moisture from the farm jeep tracks, which characterised the first and last sections of the long route.

This left the route sandy in places, but not so sandy as to prevent the riders on gravel bikes from excelling. Though the Rooibos2Muisbos by Carmién was untimed, and hence not a race, there were a number of cyclists who challenged themselves and each other. David Garrett was the first rider across the line. He completed the course on a gravel bike, proving that narrower tyres and drop bars were faster than the burlier rubber of mountain bikes on the route from Piekenierskloof to Lambert’s Bay. 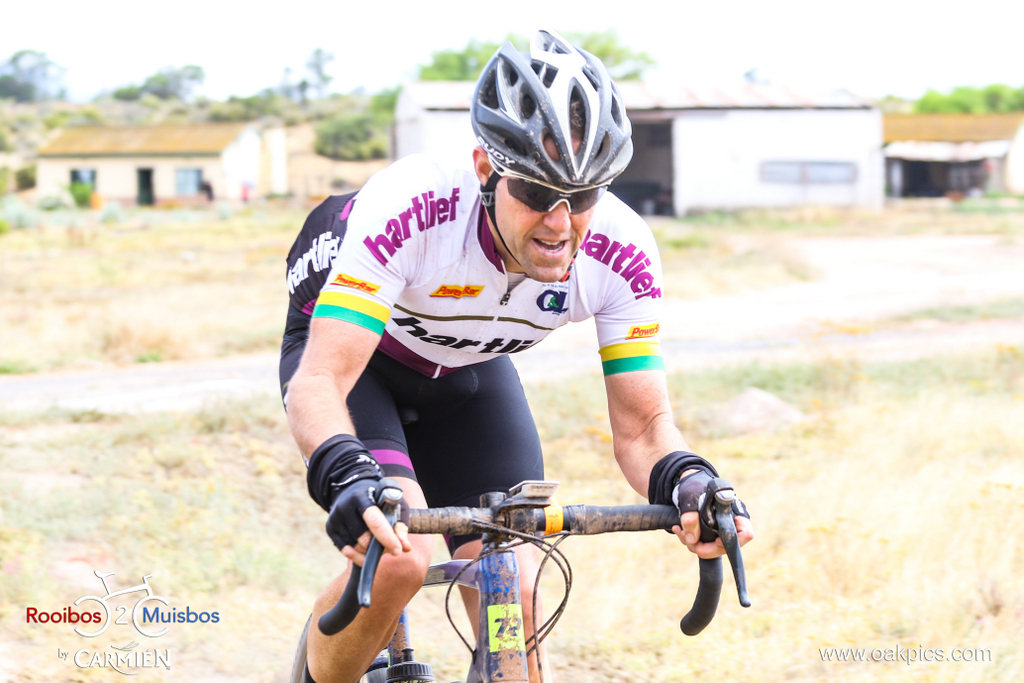 David Garrett was the first rider across the finish line, proving that the route was indeed suitable for gravel bikes. Photo by Oakpics.com.

Further back in the field riders took their time and soaked up the scenery. The spectacular rock formations of the foothills of the Cederberg Mountains, which stretch in long fingers from the interior towards the coast, breaking up the Sand Veld, provided the terroir for a challenging up rewarding opening 50-kilometres. Fynbos lined the roadside on the climbs and descents, while in the valleys’ orchards, vineyards and tea plantations showcased the fertility of Piekenierskloof. The amateur viticulturists among the riders will have noted the old-growth Grenache bush vines, which produce grapes for Piekenierskloof Wines’ the award-winning Carel van Zyl Grenache Noir Old Vines label. While Carmién’s rooibos tea fields filled the morning air with a refreshing aroma.

After the second water point, at the 52-kilometre mark, the long route entered the Sand Veld. Here the vegetation changed to sparser, low growing, fynbos shrubs with the occasional spectacular aloe rockery clinging to shallow pockets of soil in sandstone boulders. The fallow, yellow, potato fields were juxtaposed by the verdant green of the fields being irrigated for the next harvest of the versatile tubers. 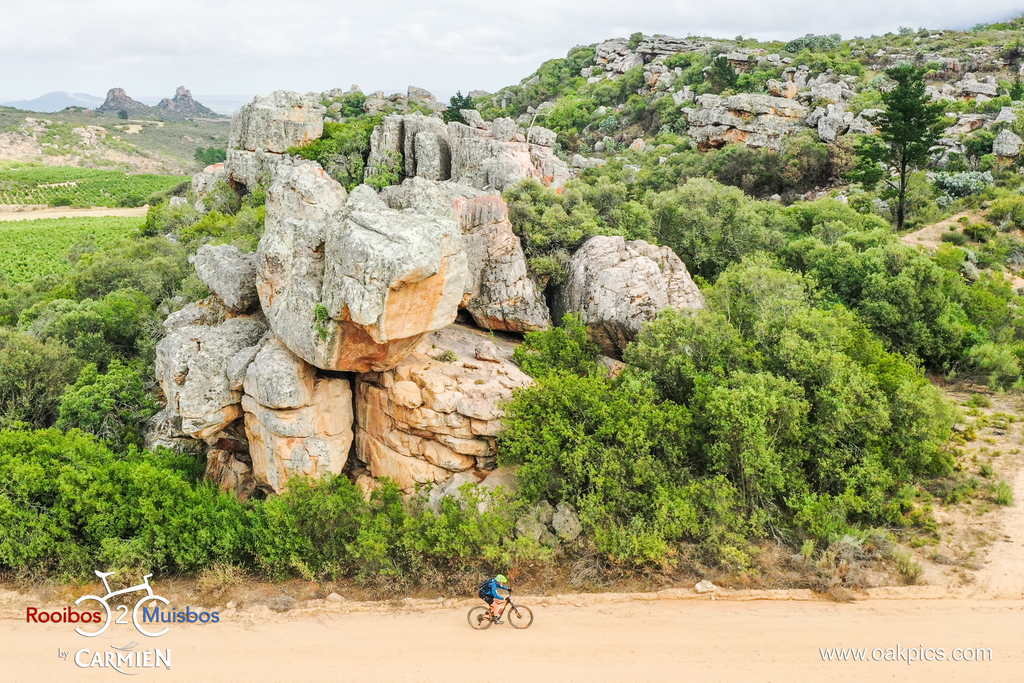 Spectacular rock formations provided awe-inspiring road-side scenery throughout much of the 107km route to the coast. Photo by Oakpics.com.

In Graafwater the long route joined the short one. Though, by the point most of those taking part in the 107-kilomere ride arrived in the hamlet the 38-kilometre riders were well on their way to Lambert’s Bay. Nearer to the finish line the route passed along the banks of an estuary and under the Sishen–Saldanha train track. Many riders were treated to the sight of the 4-kilometre-long iron-ore train click-clacking its way across the tall railway bridge above them.

At the finish welcome treats awaited. The first of which was an ice-cold can of Carmién’s new iced tea. Once the riders had received their medals, they made their way across the road to the market, while many returned again that evening for a delicious seafood dinner at the famous Muisbosskerm restaurant.

Despite the 2020 Rooibos2Muisbos by Carmién having to take place later in the year than was originally planned the event was a resounding success. Those that did struggle with the sandier sections of the route will be relieved to hear that the event will be returning to its winter date in 2021. For now though, riders are encouraged to relive this year’s memories on the Rooibos2Muisbos Facebook page; where they will find the official photo albums from the rides. 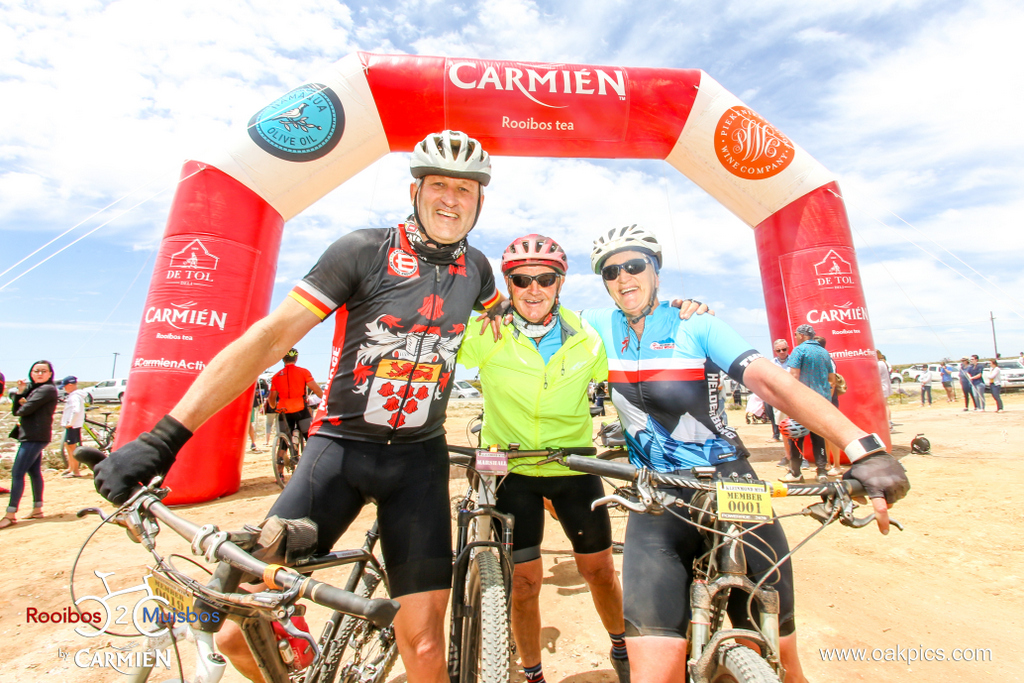