45 hours 43 minutes into his #xtremeSA2020 Im’possible Tour, Grant Lottering was forced to stop his toughest solo fundraising ride due to injury and the elements. He was attempting to cycle over 2 000km on gravel roads , including 22 300m of climbing, in just 100 hours.

After 824km of the 2 020km #xtremeSA2020 Im’possible Tour, Grant Lottering climbed off his bike in agony. “For the last 124km, I battled with rapidly increasing pain due to tendinitis of the left ITB (Iliotibial band syndrome). After navigating the 48km Prince Alfred’s gravel pass from Avontuur to Knysna on day three in heavy rain and wind, I could no longer get out of the saddle or put any power down on the pedal with my left leg,’ Lottering explains. 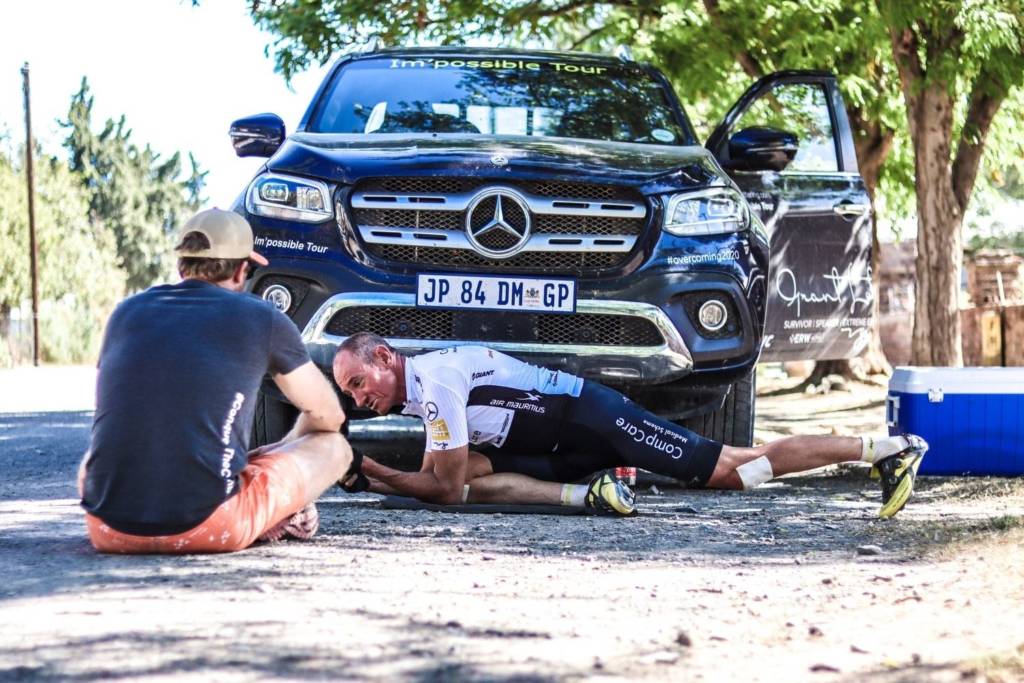 Lottering stretching out in Pearston during his Im’possible Tour. Photo by Max Sullivan.

The first 700km from the start in Nottingham Road, KwaZulu-Natal, through the Eastern Cape Highlands, and down to Knysna, proved to be even more extreme than Lottering expected. Continuous rain, cold, strong winds, plus the heat of the Karoo, combined with almost 12 000m of gravel road climbing by the time he reached Knysna, took its toll on Lottering.

“The Eastern Cape Highlands was no doubt the highlight of what turned out to be the most challenging, and testing, Im’possible Tour I have ever done,” says Lottering. He reached the foot of the Pitseng Pass, the entry to the Eastern Cape Highlands, and a brutally tough section of the route, with 240km covered. After summiting the Pitseng Pass at 2 300m, Lottering turned north towards Naude’s Nek, the second-highest dirt road in South Africa. Topping out at 2 590m it was an exceptionally tough, yet most beautiful climb. Lottering reached the summit of this mega-pass with 301km already in his legs. 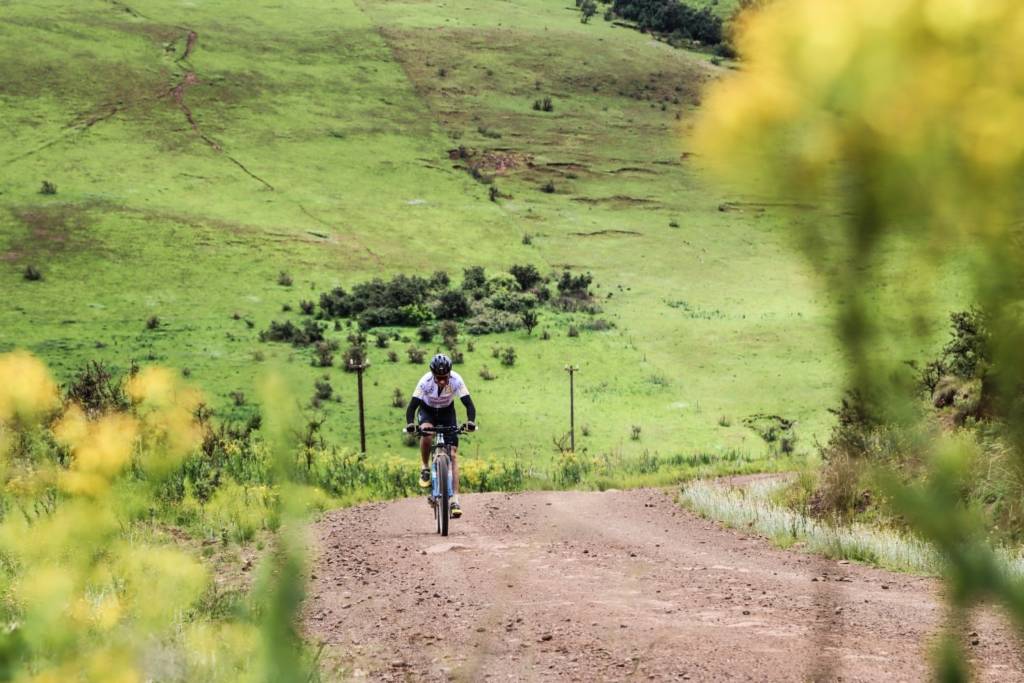 After descending toward Barkly East, Lottering managed his first 45-minute nap after 37 hours without sleep. Riding through the night into the Karoo, Lottering was feeling strong, confident and determined.

“It was only after Cradock the next morning, heading to Pearston through a semi-private reserve on a very rough jeep track and rocky gravel road, that the knee pain started”. The relentless hills, 30 plus degree heat, and a steady headwind gave Lottering no respite. By that evening, the pain in his left ITB became excruciating. With darkness setting in, and Lottering now well behind schedule, Lottering and his support team decided to cut the Baviaanskloof from the route and head to Knysna via Avontuur. 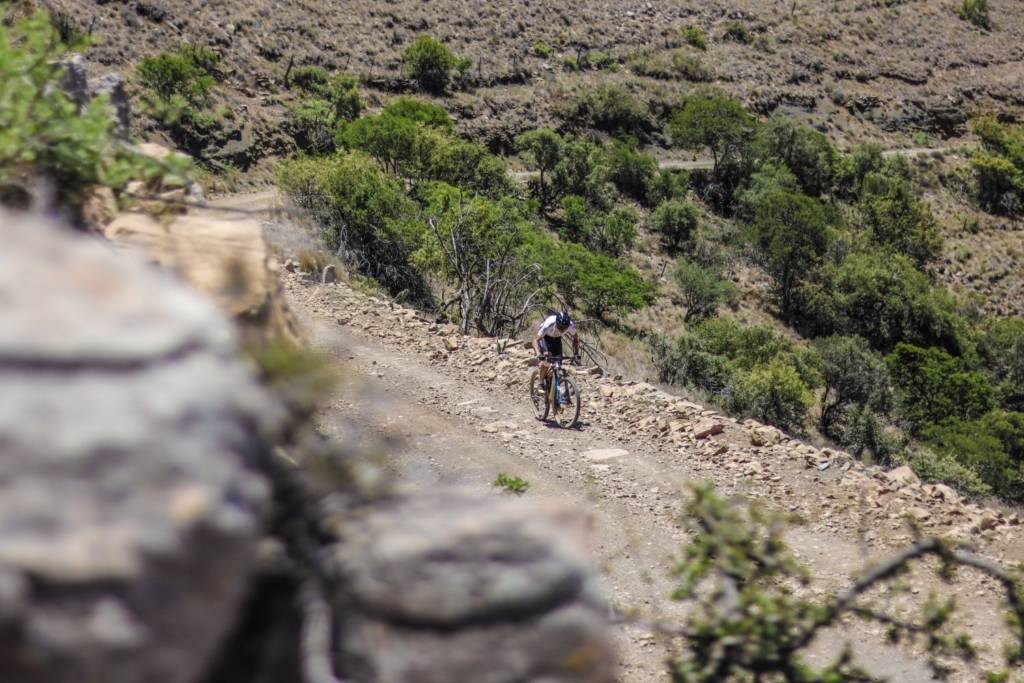 The rough roads took their toll. Photo by Max Sullivan.

There, at the Northern foot of the Prince Alfred’s Pass, he faced yet again relentless windy and rainy conditions. Lottering laboured up the pass’s long climbs, drenched and covered in mud; pain etched on his face the minute the road turned upward, and power had to be applied to the pedals.

It quickly became apparent that Lottering would not be able to carry on for much longer, especially with the Seven Passes Road, Montagu and Swartberg Passes looming. In Knysna, the crew discussed their options. Lottering was resolute; however, he would carry on until he could no longer turn a pedal. “To honour my sponsors, Mercedes-Benz South Africa, CompCare Medical Scheme, Air Mauritius, UHSM Health Share, as well as the kids I raise money for, I will not stop until I know I have given absolutely everything,” Lottering determined. “The purpose behind why I do these extreme endurance attempts is what makes the pain bearable. Knowing I am raising funds for underprivileged children supported by the Laureus Sport for Good Foundation”. 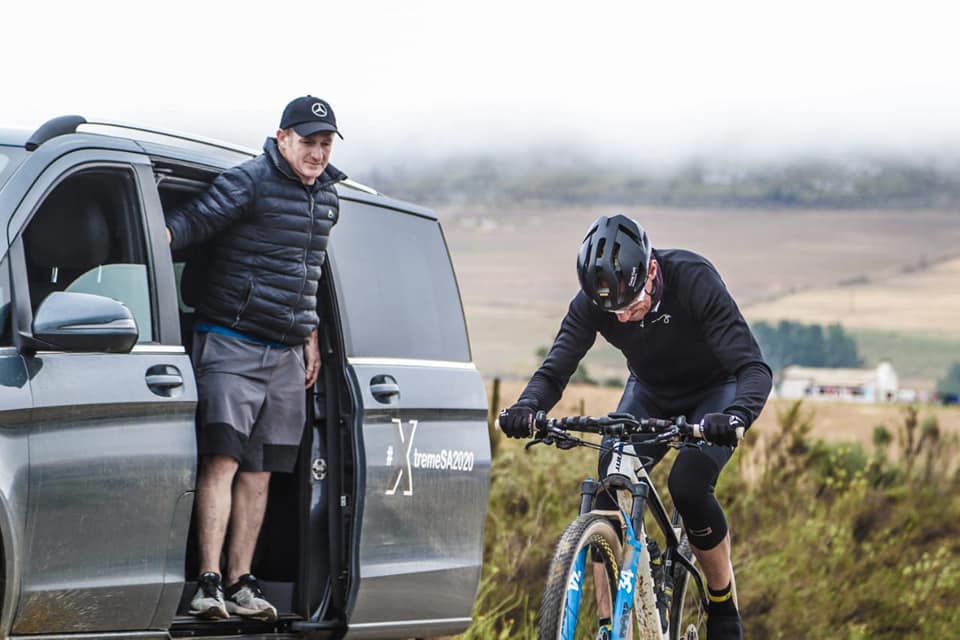 I am disappointed, and just like the year 2020, things happen beyond our control. It’s how we respond that determines the difference. With future Im’possible Tours planned for both Italy and the USA in 2021, I am now more determined than ever, to have my revenge.