Quénet Siblings KnockOut All Comers at Torpedo SwimRun by OUTsurance

Quénet Siblings KnockOut All Comers at Torpedo SwimRun by OUTsurance

Nick and Alexandra Quénet once again proved unstoppable in a SwimRun event when they each won their age group and overall titles at the inaugural Torpedo KnockOut by OUTsurance. The Siblings both blitzed the course, setting the fastest men’s and women’s overall times in qualifying. Then made short work of their 19 to 29 age group categories. The pair topped off the day with dominant performances in the Open categories, both beating elite international triathletes into second.

Hosted on the pathways and in the canals of the Victoria & Alfred Waterfront’s Battery Park precinct the KnockOut event proved an action-packed concept. The first race under OUTsurance’s sponsorship the Torpedo KnockOut presented by OUTsurance showcased fast paced SwimRun racing. From the first qualifying laps, at 06:40, to the open women’s final, at 10:30, there was seldom a moment without athletes on course.

The 1000-meter-long circuit was made up by 4 runs and 3 swims, but with just over 30% of the course being made up by swim legs it was a route that favoured the swimmers. As such it was unsurprising when Nick Quénet set the fastest qualifying time. His 7 minutes and 27.9 seconds was 30 seconds faster than Richard Murray’s time. Alexandra Quénet’s time was 8 minutes 35 seconds, good enough for sixth fastest overall and 14 seconds faster than Dutch triathlete Rachel Klamer. 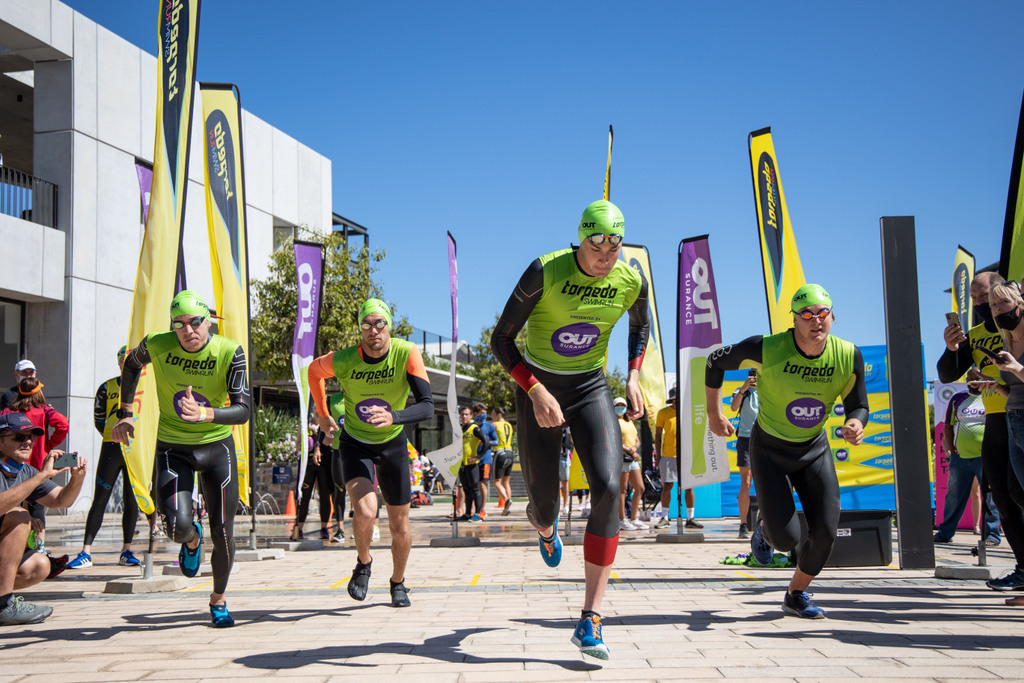 Nick Quénet sprints off the line in the men’s 19-29 age group final. Photo by Caleb Bjergfelt.

In the age group heats the Quénets were largely unchallenged. The pair paced their way through the 4-athlete quarter and semi-finals before blitzing the 19 to 29 age group finals. Klamer similarly dominated the women’s 30 to 39 category. While the men’s 30 to 39 title came down to a sprint between Murray and Phillipe Drolet.

Drolet led out of the water, after the 120-meter long first swim. The 300-metre sprint up and down the stairs; to the ancient defensive walls of the 333-year-old Amsterdam Battery saw the lead change hands. Murray started the longest swim with a 5-second buffer, but Drolet gradually reeled the South African in. The pair jostled for position getting out of the water, with the larger Drolet being able to outmuscle Murray when in mattered most. He made the decisive move, hauling himself up the last ladder ahead of his rival and sprinted for the finish.

Crossing the line Drolet lunged for the can of Red Bull, which the winner had to grab to seal the title, while Murray had to be content with second. “That was fantastic” Drolet laughed. “This is why we race. To be able to go head-to-head against a competitor like Richard [Murray] makes you give your all and race as fast as you can.” 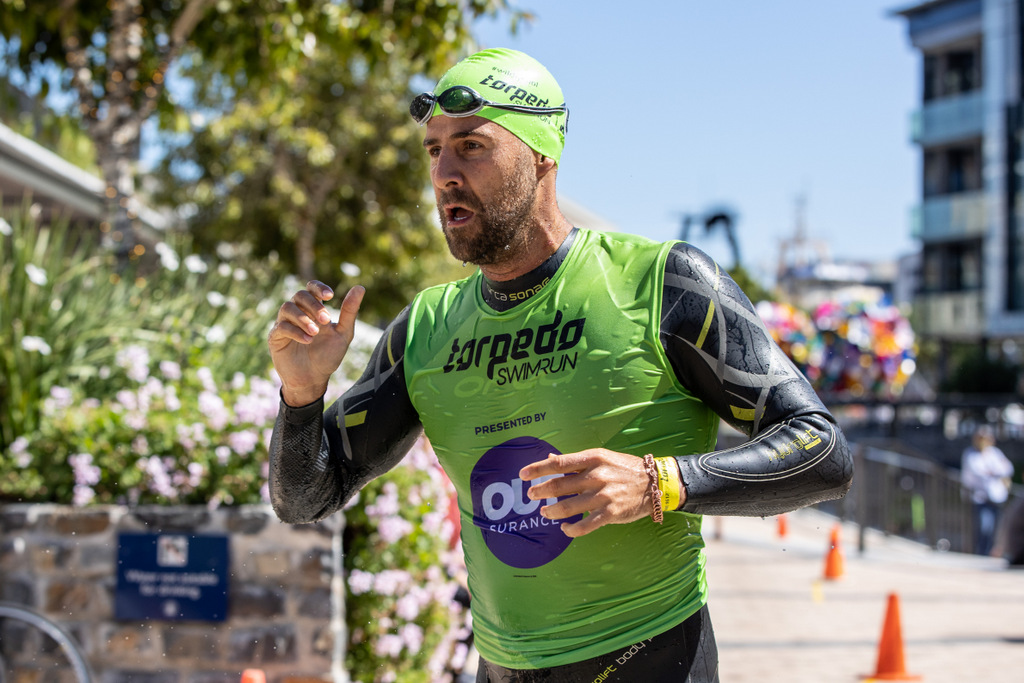 Just 20 minutes after their lung-busting efforts in their age group final Drolet and Murray lined-up against Nick Quénet. The older pair managed to hold the young racer’s shoes for the first swim, but on the longest run Quenet pulled away. With the elastic between him and his pursuers snapped he was able to run and swim home to a relatively comfortable overall victory.

“It’s pretty special to be able to win against such class athletes” Nick Quénet confessed, with a smile. “I knew it was a course which would favour the strongest swimmers, so I think I had a bit of an advantage. It was great race though and totally different from the other Torpedo SwimRun events. You really had to manage your energy levels carefully, with so much racing in a short space of time.”

Alexandra Quénet would not be outdone by her brother. She completed the clean sweep for the family by claiming the overall women’s victory over Klamer, Rebecca Nolan and Sam Whelpton.

“We’re really stoked by the fast-paced racing and general good vibe at the inaugural Torpedo KnockOut by OUTsurance” Torpedo SwimRun presented by OUTsurance’s Richard McMartin said. “By all accounts the competitors had a fun morning out and I’d like to thank everyone who came out to take part. I think there is lots of growth potential for this exciting format and I hope that it will provide young athletes in particular with an easy route into the sport. We’re all looking forward to more thrilling races in 2021, starting with Torpedo Val de Vie by OUTsurance on the 30th and 31st of January.” 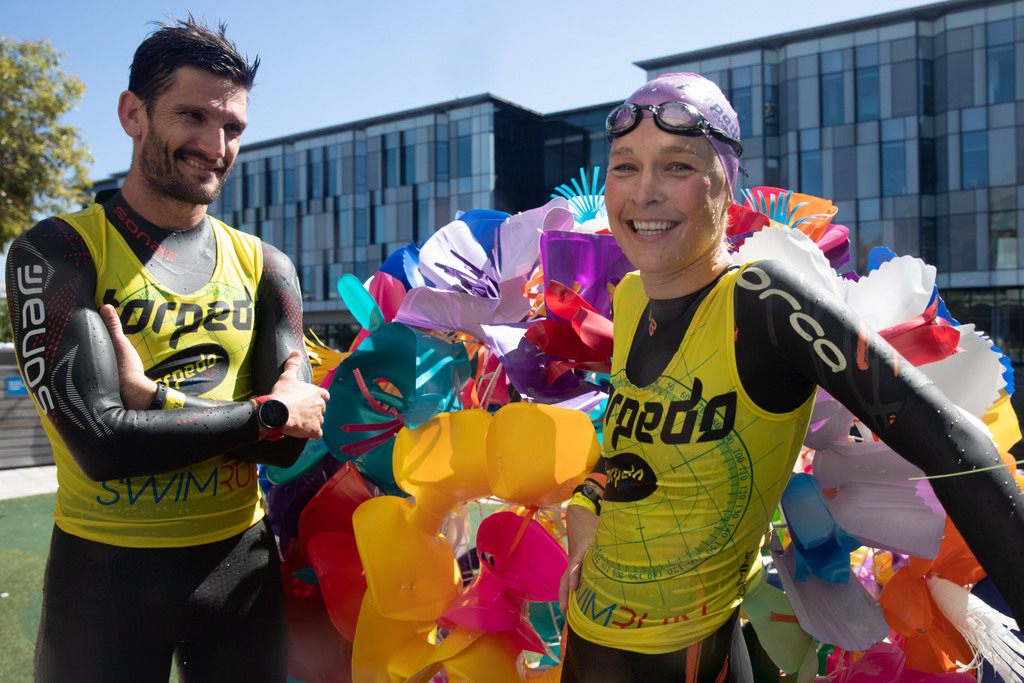 World renowned triathletes, Richard Murray (left) and Rachel Klamer (right) had to settle for second place in the open men’s and women’s categories, respectively, having been bested by Nick and Alexandra Quénet. Photo by Caleb Bjergfelt.