The 2021 Torpedo SwimRun, presented by OUTsurance racing season got underway at Plaisir de Merle, on 3 April. Mother Nature smiled upon the 150 intrepid athletes who undertook an active start to their Easter Saturday, providing postcard perfect weather for the 12-kilometre race. South Africa’s top SwimRunners, Nick and Alexandra Quénet blitzed the course; in so doing the siblings maintained their undefeated record in Torpedo events.

In the men’s race Nick Quénet was the hot favourite. His nearest rivals just about managed to hang onto his coattails for the first run, a 1.6-kilometre dash along scenic vineyard roads. Once he entered the water for the first swim it became clear nobody would be able to match the multi-event Torpedo SwimRun, presented by OUTsurance, champion. Exiting the first, 400-metre swim, Quénet’s lead was already close on a minute. By the time he reached the finish line, after 5 more runs and 4 additional swims, he had extended it to close to 9 and a half minutes.

His sister, Alexandra Quénet was nearly as dominant in the women’s race. Her margin of victory was only 42 seconds less. She maintained a position in the top 10 overall throughout the race; as she shook off the cobwebs, having recently returned from injury. 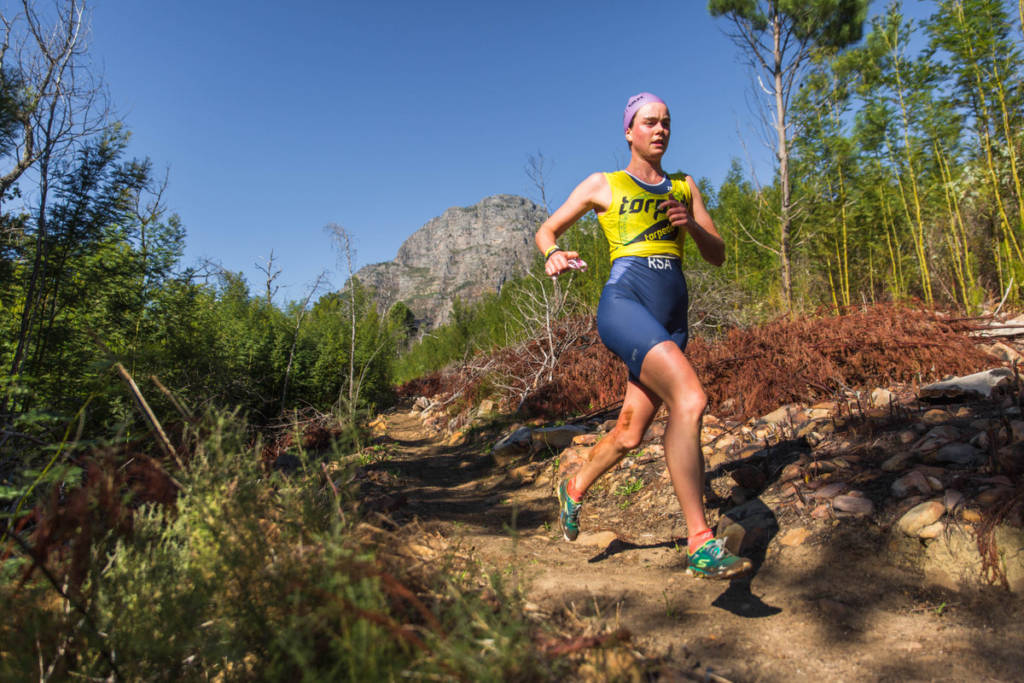 “It was a really tough course” Nick Quénet reflected on the finish line. “It’s the first Torpedo SwimRun presented by OUTsurance here at Plaisir de Merle. I keep saying after every race that it was the toughest course yet, but today definitely was! Especially those hills. But there was great reward coming down though. Fresh, fresh singletrack. That was really nice.”

“The singletracks, cool under the indigenous trees, were amazing” Alexandra Quénet echoed, before casting ahead to the next event. “We’re actually still deciding what we’re going to do for Torpedo SwimRun Cape by OUTsurance. I’ve actually just come off an injury and Nick is really flying at the moment. We’d obviously love to line-up and try to defend the title we won as a team in 2019. But it’s a long, hard, race; which needs to be respected. So, we’ll see how we recover this week.”

Among the more social competitors who took on the Torpedo SwimRun Plaisir by OUTsurance was triathlon legend Conrad Stoltz. The Caveman, as Stoltz is affectionately known, was trying hard to take it easy. “My plan was to have fun, but I can’t resist those old racing urges” he laughed mid-race. 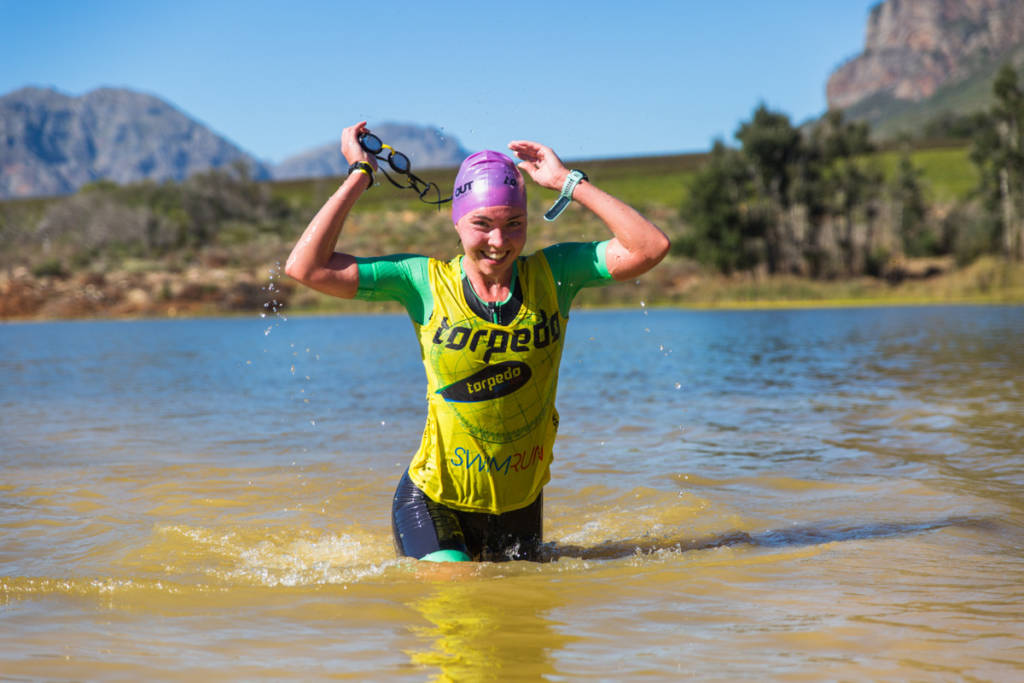 Torpedo SwimRun Plaisir by OUTsurance is a Blue grade event. This means that competitors take part individually, rather than in teams of two, and that the swims are relatively short. Photo by Johann Minnaar/Threshold Photography.

“I just love the outdoors and multisport” Stoltz added. “SwimRun is such a great sport, you just need takkies and swimming goggles. It’s so easily accessible. And events like this play off that strength, the route is short enough that I’m done in under an hour and a half. Plus, it’s hosted at such a spectacular venue; my wife and kids are waiting at the finish, enjoying the market.”

One does not have to be an athlete of the calibre of Stoltz or the Quénet siblings to take part in a Torpedo SwimRun presented by OUTsurance event. The series has Blue and Black graded races. The Blue events, like Torpedo SwimRun Plaisir by OUTsurance, are raced solo and feature a mildly difficult course. The Black events, like Torpedo SwimRun Cape by OUTsurance, are raced in teams of two and feature more technically difficult routes. By taking part in a Blue grade event, which includes shorter swims in dams and rivers, athletes can gain confidence in their own abilities before taking on a Black grade event with open ocean swims.

The next event on the calendar is the series’ flagship race: Torpedo SwimRun Cape by OUTsurance. It takes place on Sunday, 11 April, in Cape Town. The racing starts above Sandy Bay and finishes, after 12-kilometres of running and 4-kilometres of swimming, at Clifton Fourth. As a Black grade event it is contested in teams and the reigning champions are Nick and Alexandra Quénet who set the course record, of 1 hour, 50 minutes and 56 seconds last time out. 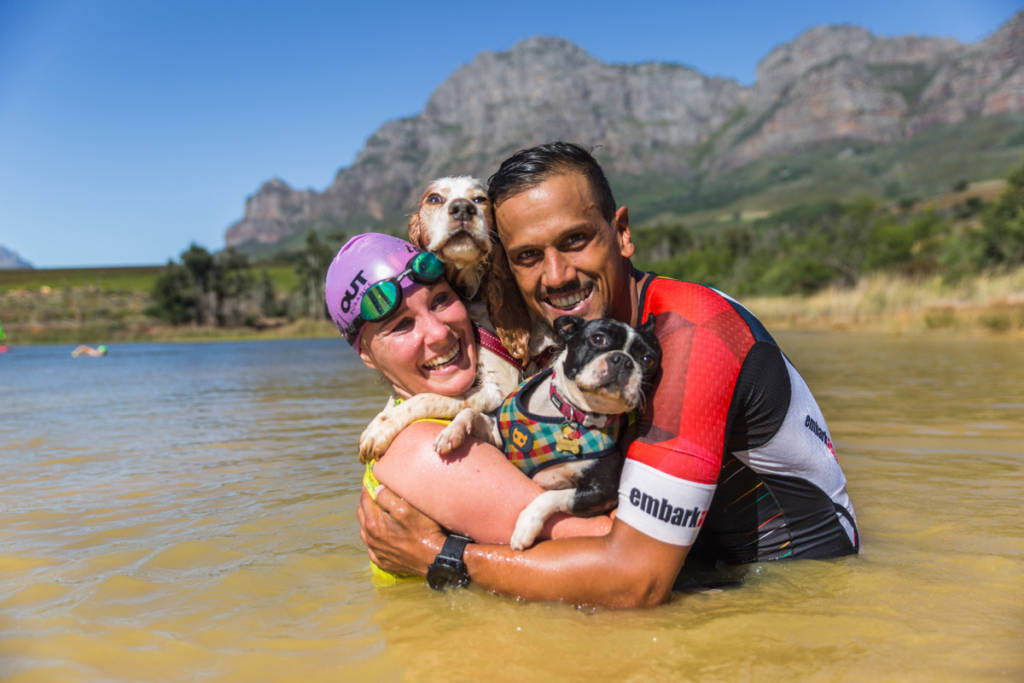 The prefect weather and beautiful host venue, at Plaisir de Merle wine estate, made for a spectacular day out for the whole family (pets included). Photo by Johann Minnaar/Threshold Photography.

To view the full results from the Torpedo SwimRun Plaisir by OUTsurance click here.