Matt Beers and Yolande de Villiers won the 2021 South African XCM Championships in Paarl on Saturday, 1 May. The Type{DEV} NanoTime rider dominated the race, virtually from the gun, to win by 5 minutes and 21 seconds. While the women’s race had more drama as the Cycling South Africa commissaires had to adjudicate the winner following a protest, after Robyn de Groot had crossed the finish line first.

The challenging 85-kilometre route featured 2 100-metres of climbing, most of it falling within the first 50-kilometres. Hosted by the Paarl Adventure Trails a great deal of the course was made up of singletrack, including the Spice Route, Diamante Estate and Rhebokskloof cross-country loops. As such the strongest riders were always likely to emerge victorious.

A fast start loop hardly spread the field as the leading men blitzed the first 6-kilometres of dual track. Then a steep climb towards the first singletrack of the day, the infamous Wall climb, stretched the group. Beers lead into the singletrack and rode it at a pace which had his rivals on the back foot. The Type{DEV} NanoTime star summited with the embryo of an advantage, which he would incubate into an unassailable lead over the next 70-kilometres. 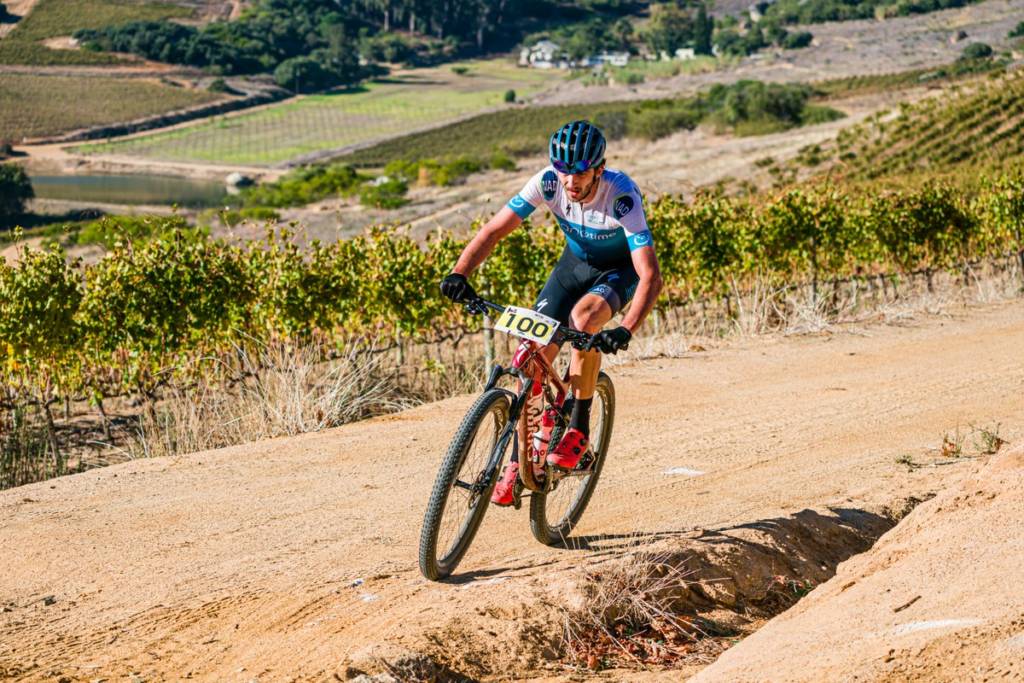 Matt Beers soloed to an impressive victory and his first national title in the 2021 South African XCM Championships; in Paarl on Saturday, 1 May. Photo by Chris Hitchcock.

“I made my move on The Wall” Beers recounted. “Then tried to hold a pace which I thought the group behind would probably be riding. The route, with so much singletrack, did not really lend itself to groups working together, so I did not feel being on my own was much of a disadvantage. I saw Arno [du Toit] was chasing me initially; but when he dropped back, I just had to keep up my tempo.”

“The last 5-kilometres or so were really though” Beers added. “I was cramping so badly. But I’m so happy to win the South African Marathon title. It’s been a big goal of mine for years, especially after missing the 2019 race, with a broken collar bone, and the 2020 race because of its Covid cancellation.”

Behind Beers, as Du Toit’s challenge for victory faded he was swallowed up by a chase group which constantly changed its composition. PYGA EuroSteel were represented throughout though as Heyns, Buys and Beukes all contributed to the pursuit of Beers. Du Toit’s Insect Science teammate Bontekoning, and the Imbuko Giant pair of Nortje and Koen also assisted in the chase.

Eventually it was the experience of Beukes that prevailed. He and Du Toit distanced their companions, one-by-one, until they were able to contest a two-up sprint for second. Beukes pipped his former teammate to the line, in so doing securing his best South African Marathon Championships result.

“I tried to ride my own race today” the PYGA EuroSteel rider reflected. “I started steady and rode my way into contention. But even if I could have gone with Matt [Beers] earlier I do not think I would have been able to stay with him throughout the race. He was the worthy winner today.” 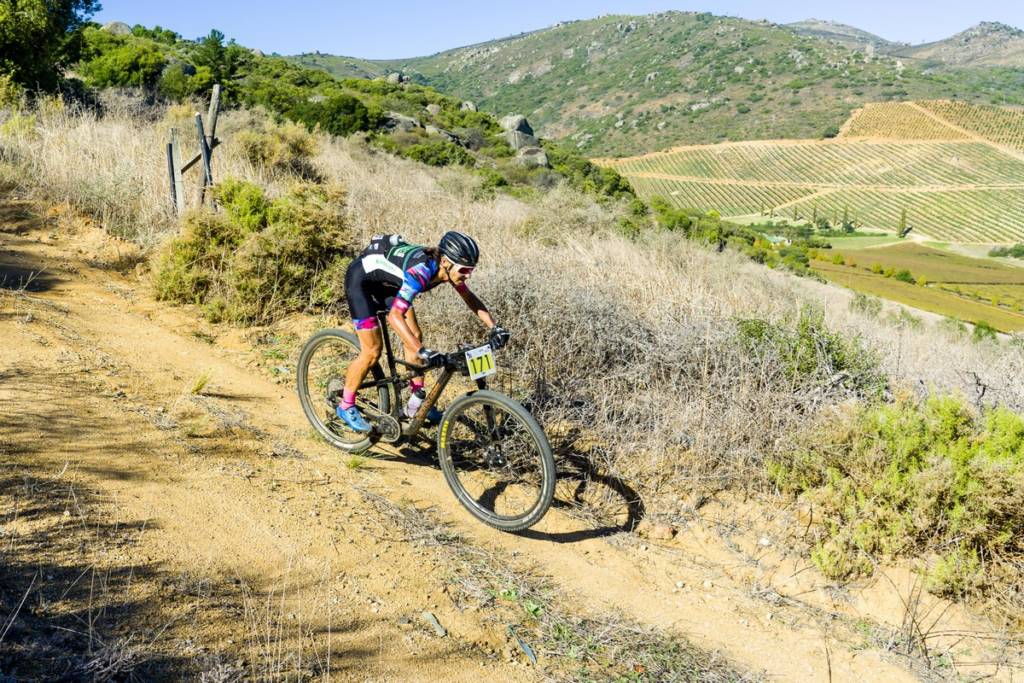 Yolande de Villiers was adjudged the 2021 South African XCM Champion, after the first woman across the finish line – Robyn de Groot – was disqualified for taking a wrong turn and missing a section of the route. Photo by Chris Hitchcock.

In the women’s race De Groot, Amy McDougall and De Villiers distanced the rest of the field within the first 30-kilometres. The six-time champion then pulled away from her breakaway companions, quickly establishing a 4-minute advantage over the next 10-kilometres. Tragedy struck for the dormakaba rider in the Rhebokskloof singletracks however. She invertedly followed the wrong trail and cut 5-kilometres from her race distance.

Though De Groot crossed the finish line first; the victory, upon a careful examination of the leading women’s GPS files, was awarded to De Villiers. Having come back from a potentially career ending leg break, in 2019, the victory represents a remarkable return for the Mad Macs rider. De Villiers’ persistence and tenacity are an example to all young riders and an illustration of the rewards reaped from years of dedication.

With De Villiers moving up to first, the South African Road champion, Hayley Preen, inherited second and McDougall stepped up onto the final podium place. “It was an incredible race” McDougall stated from the podium. Her sentiments were echoed by many a rider, as praise for the route was a common theme of the post-race interviews. “It was a proper race” Henry Liebenberg emphasised. “It was my first marathon since 2019, so it was though. But well done to the route team for putting together such an amazing course.”

Given the change in UCI rules the marathon champions will now be able to wear their national colours in stage races. This means that Type{DEV} NanoTime will need to design Beers a new jersey, to incorporate the South African flag into their white and blue kit, before KAP sani2c. The three-day stage race from Underberg to Scottburgh, in KwaZulu Natal, starts on Friday, 14 May. 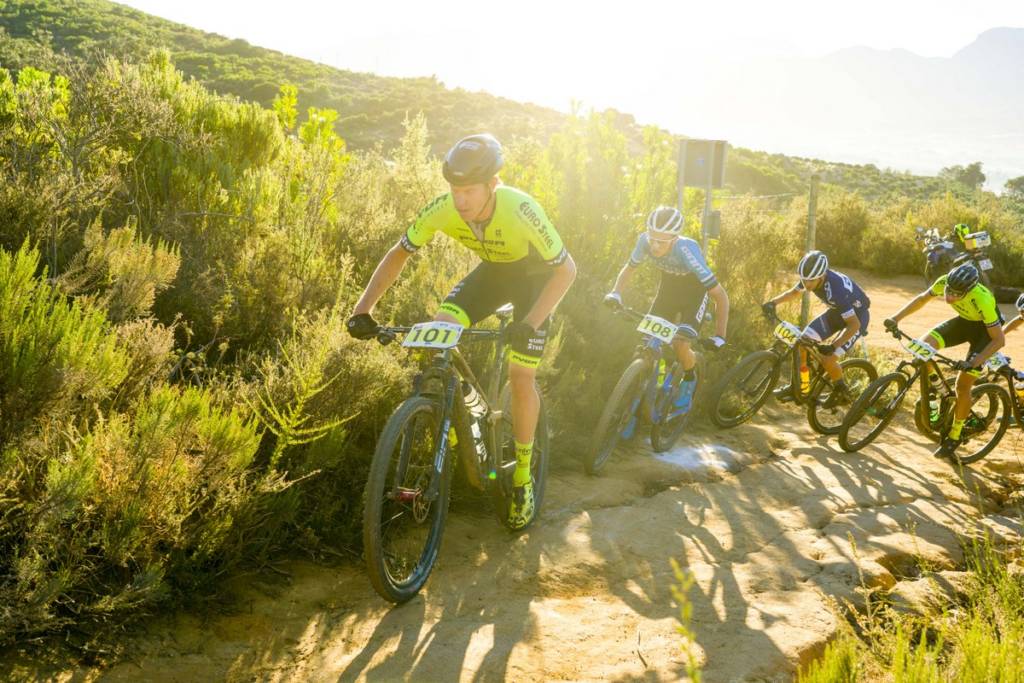 The 2021 South African XCM Championships were held in pristine conditions, on the Paarl Adventure Trails. The challenging 85km course included 2 100m of climbing and proved a stern but fair test for the elite men and women. Photo by Chris Hitchcock.

For the full results from the South African XCM Championships please click here.