The 2021 Muizenberg Trail was won by Lijan van Niekerk and Jarryd Dunn on Saturday, 15 May. Typical Cape winter conditions, on the day, made for challenging but exhilarating trail running on the 20-kilometre route through the mountains overlooking False Bay. Two strenuous climbs, with brutal gradients, within the first half of the route accounted for the lion’s share of the 1 200-metres of accumulated elevation gain and set up both Van Niekerk and Dunn for their victories.

Unlike most events, which see the fastest runners setting off first, the Muizenberg Trail features self-seeded batch starts. The slowest runners depart first. While the men’s race favourites are the last off the start line. This is done to ensure that all the participants finish within an hour or so of each other, which creates an electric atmosphere on the finish line.

Not even the intermittent drizzle could dull the excitement which reigned all morning. If anything, the wet weather added an element of adventure to the day’s proceedings. From the first start batch, at 07:30, to the moment when the final finisher crossed the line, at the Sea Scout Base in Lakeside, there were exclamations from happy trail runners; thrilled to be back racing in the mountains. 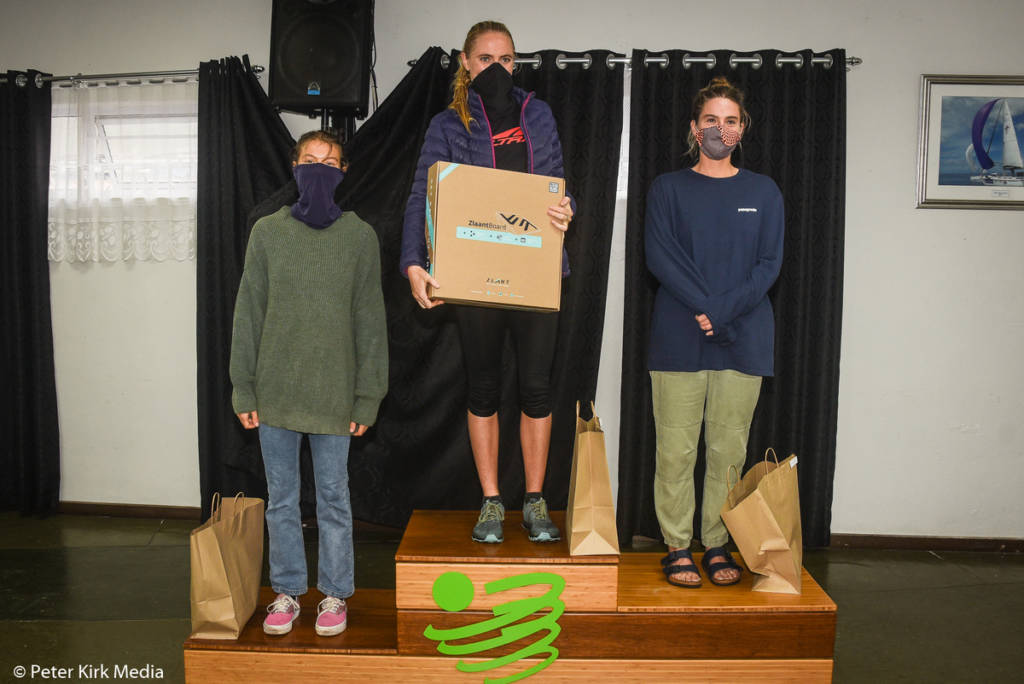 In the women’s race Van Niekerk paced her effort to perfection. She and Samantha Reilly ran the first climb, to the Queen of the Mountain point atop Muizenberg Peak, together. They matched each other stride for stride on the descent too, but on the second ascent of the race Van Niekerk began to edge away. Over the course of the next 10-kilometres she gradually extended her advantage of a sizable 4 minutes and 56 seconds.

“It was very good! And quite technical” a smiling Van Niekerk recounted from the finish line. “The trails were really beautiful, which was good because I wasn’t feeling that great. I did an adventure race last weekend and my legs are still a bit tired from that. But it’s all good and I’m really happy to take the win here at the Muizenberg Trail.” 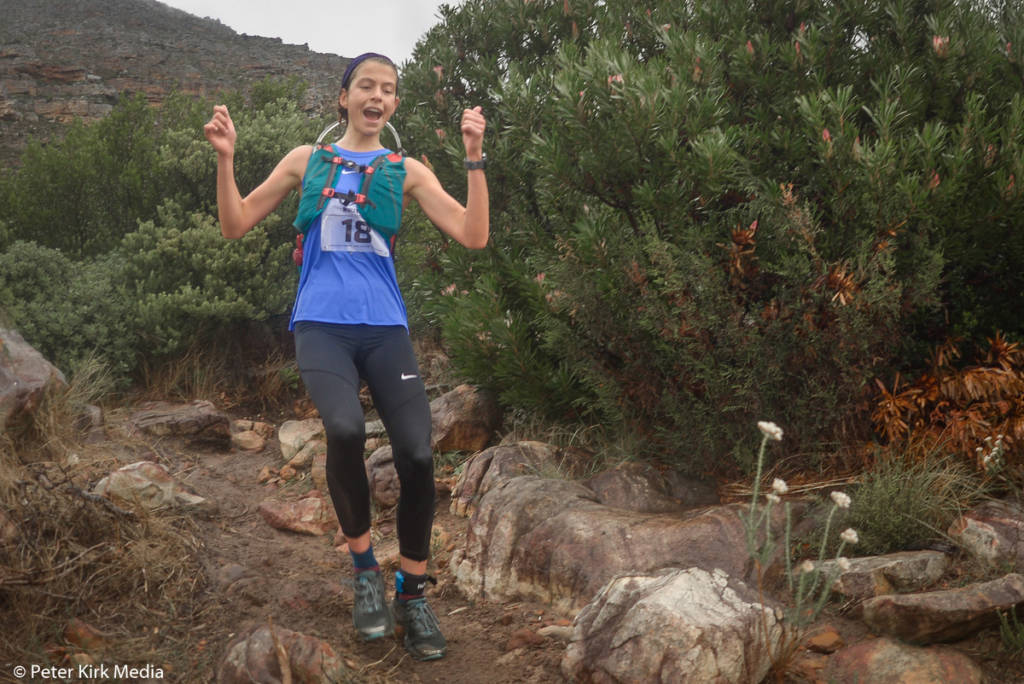 “It was amazing; beautiful up there” a drenched Reilly added after finishing second. “Actually, not so stormy up on the mountain, but wet and just really fun. I loved it.” Reilly and Van Niekerk were joined on the women’s podium by Jessica Meniere.

In the men’s race Vivobarefoot’s Dunn was the man to beat from the off. He and 2018 Ultra Trail Cape Town champion, Siviwe Nkombi set off fast, but a wrong turn near the Muizenberg Peak summit let Tim Chambers take the lead. Chambers was unable to profit from Dunn and Nkombi’s error however as they soon passed him once more. 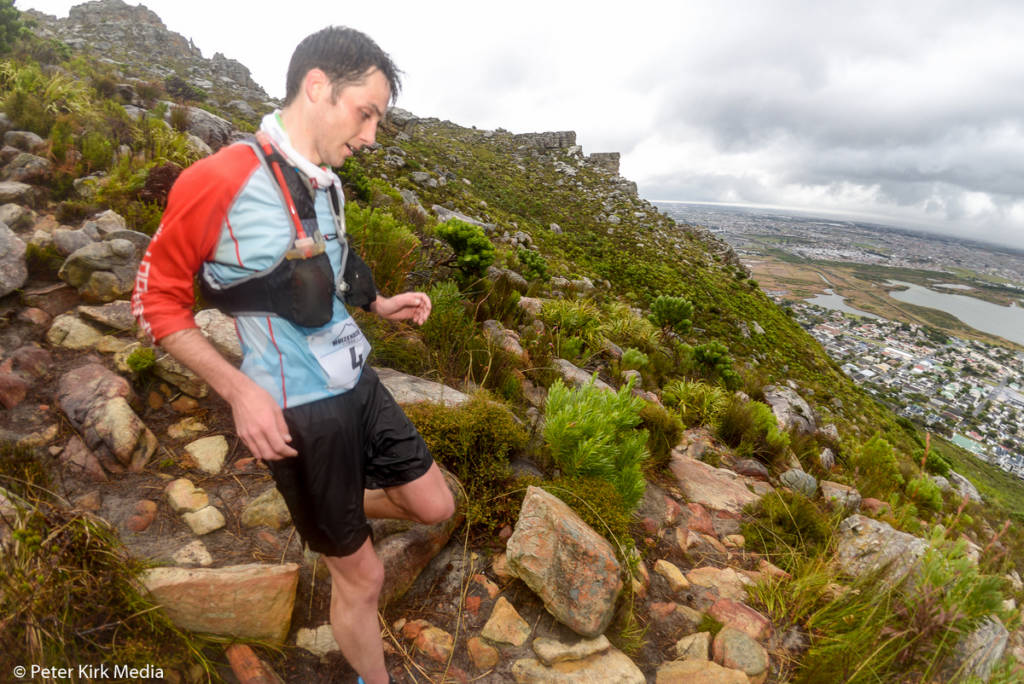 Jarryd Dunn on his way to victory in the 2021 Muizenberg Trail. Photo by Peter Kirk.

That would be the last any of his rivals would see of Dunn, though Nkombi’s race did not progress as smoothly. While chasing Dunn up a climb, which followed Balley’s Kloof to the second highest point of the day, Nkombi started to suffer back pain. This allowed Chambers, Robert Shaff and the first veteran, Neil Boers to overtake him.

Dunn remained in a class of his own, running home the winner in a remarkable time of 2 hours, 15 minutes and 33 seconds. “I’m really stoked to have taken the win” Dunn enthused. “It’s a stunning course. I really love the Muizenberg Mountains. Richard [Sutton] talked about it being a hidden gem and it’s definitely one that I appreciate a lot.”

A theme for the podium finishers was to remark on the incredible route and the second placed man, Chambers, continued that trend. “The route was exceptional and it wasn’t actually as wet as I’d expected it to be up in the mountains” he laughed. “It’s actually raining harder down here at Sandvlei. It was a lot of fun, even if I’m lacking a bit of pace at the moment. I seem to be developing a bit of a diesel engine as I get older.” 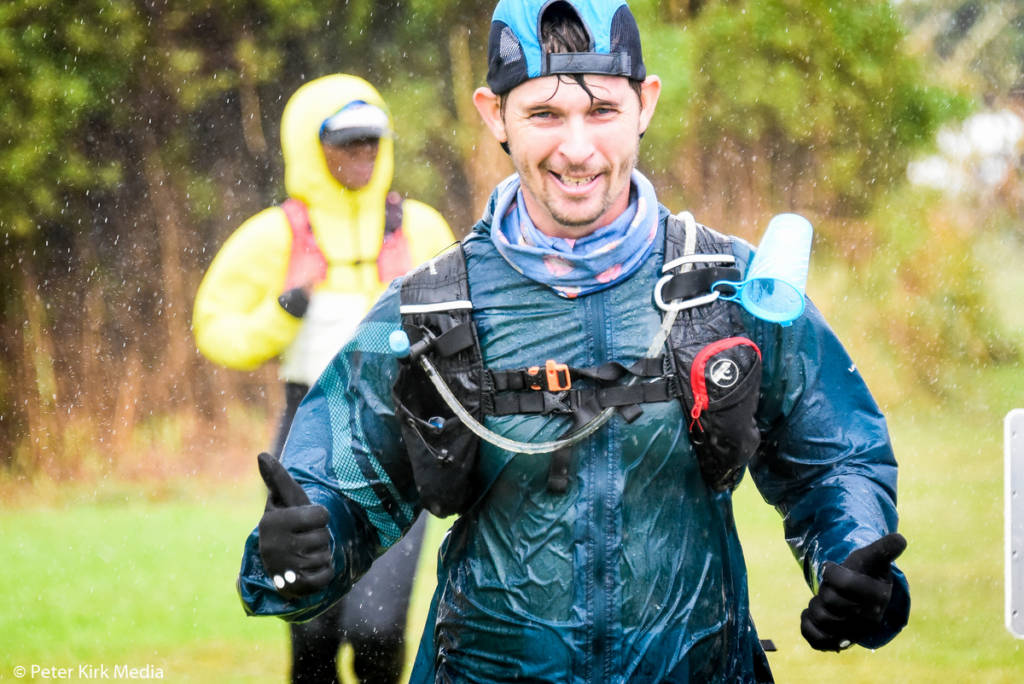 Thumbs up after a wet but fun day on the mountain. Photo by Peter Kirk.

Chambers’ good-natured self-deprecating jokes were followed by laughter from Shaff. The third placed men’s finisher had taken a wrong turn on his way to victory in the inaugural Muizenberg Trail in 2020. To avoid that this year he drew the route map on his arm, as his watch does not provide turn-by-turn navigation. “It worked” Shaff exclaimed to the amusement of his friends on the finish line.

Trail runners, who missed the 2021 Muizenberg Trail can take heart in the fact that the Old Fisherman’s Trail Challenge is just under a month away. The race from Hout Bay to Fish Hoek, follows an old fisherman’s footpath which linked the two suburbs when they were hamlets, isolated from the rest of Cape Town by the mountain ranges which encircle them.

The Old Fisherman’s Trail Challenge takes place on Saturday, 5 June, and is followed by another famous Cape Town trail run; the Hout Bay Trail Challenge on the 24th of July. To find out more about these events visit www.fishermanschallenge.co.za and www.houtbaychallenge.co.za respectively. For more information on the Muizenberg Trail click on www.muizenbergtrail.co.za. 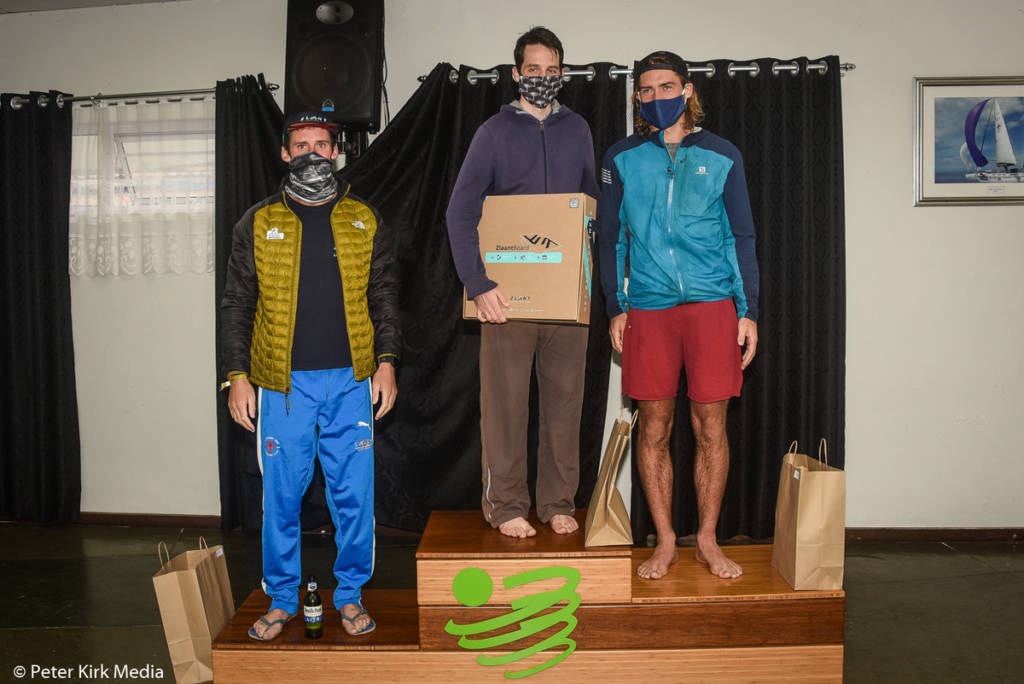 To view the full results from the 2021 Muizenberg Trail please click here.