Llewelyn Groeneveld and Lijan van Niekerk claimed the 2021 Old Fisherman’s Trail Challenge titles on Saturday, 5 June. The pair won the men’s and women’s races in dramatically different fashions; with Groeneveld outsprinting Robert Rorich, after the leader had been caught in the final kilometres.  Van Niekerk, meanwhile, led from the front, extending her advantage throughout the 25-kilometre-long course.

The route, which took 250 runners, from Hout Bay Harbour to Fish Hoek beach followed a historic hiking trail, which fishermen used to walk as they chased the ideal ocean conditions from the warm waters of False Bay to the colder Atlantic Seaboard. Unencumbered by fishing tackle, bait and a catch the trail runners were able to make quick work of the strenuous route. None more so than Groeneveld and Rorich.

The former 800- and 1 500-metre specialist was well aware of Rorich’s descending prowess. “I went out a little harder, but always staying below my lactic threshold” Groeneveld explained. “I knew I had to establish a lead on Robbie [Rorich] because of how fast he goes downhill and I was weary of how technical the last descent was.” 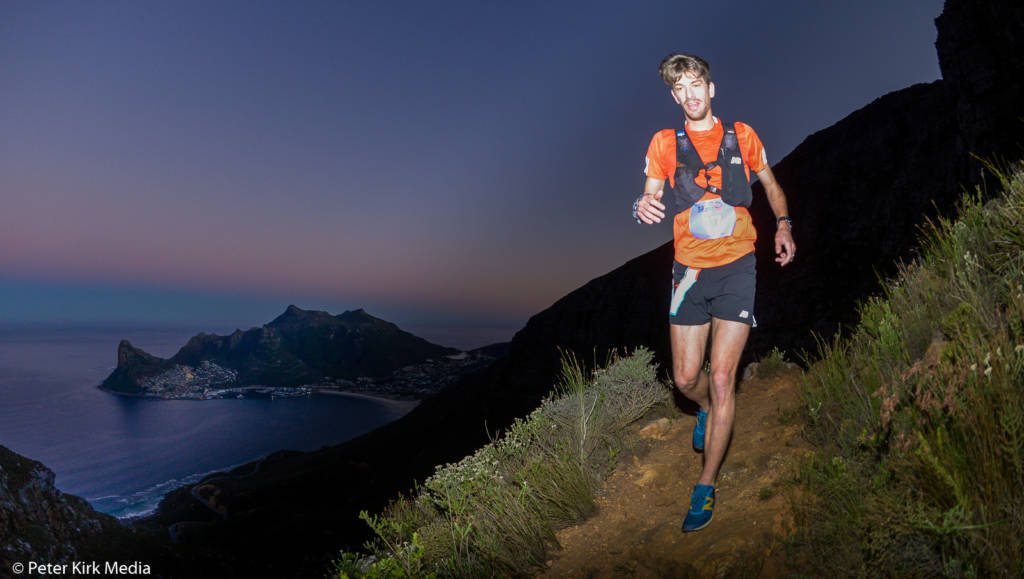 By the half-way point of the race, crossing the Silvermine Road, Groeneveld’s plan was working to perfection. He held a 90-second lead over Rorich, with Kyle Bucklow and, Muizenberg Trail champion, Jarryd Dunn a further 20-seconds adrift. Rorich used the long descent in the latter half of the course to reel the leader in; but only made the catch on the final climb, within the last 5-kilometres.

“He caught me on the last climb, actually” Groeneveld said, picking up the story. “Then put about 40-metres into me on the technical descent that followed. I just tried to stay calm and worked to close the gap on the flat trail along the river. When we hit the beach, side-by-side, I knew it would come down to a sprint. I was just hoping the old track speed would see me through. And it did.”

Groeneveld and Rorich turned off the hard-packed sand on the waters’ edge shoulder-to-shoulder, but crossing the low dune which separates the Fish Hoek Beach from the finish line at the Surf-Ski Club Groeneveld’s leg speed saw him home. Rorich crossed the line 10-seconds later, having slowed to a walk as Groeneveld pulled clear. The pair were joined on the podium by, Dunlop Tyres athlete, Bucklow; who also, impressively, managed to break the 2-hour mark. 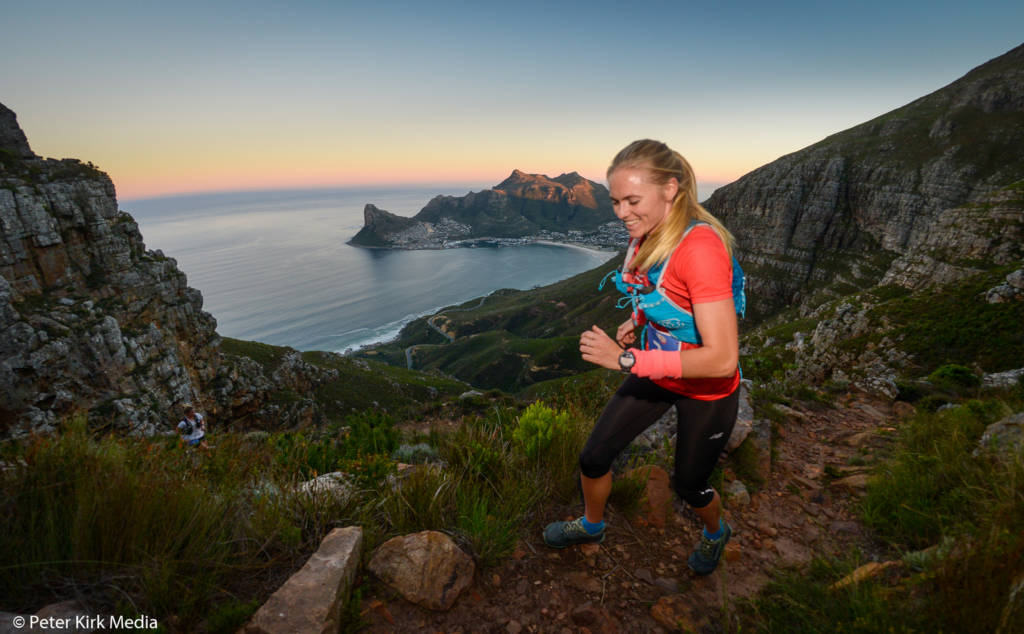 In the women’s race Van Niekerk went two-thirds of the way to claiming a remarkable triple crown at the Old Fisherman’s Trail Challenge. In so doing she added to the Muizenberg Trail title, which she won in May, and could now race to a trifecta if she can complete the set at the Hout Bay Trail Challenge, on the 24th of July.

“Sam [Reilly], Marna [van Deventer] and myself went up most of the first climb together” Van Niekerk related. “I sort of just out-hiked them up the steepest bit, got a lead and then ran my own pace for the rest of the race. The long section between the two peaks was very runnable and suited me perfectly. It was also really nice to see the sunrise and the pink skies from the top of the mountain this morning. I’d heard from so many people that Fisherman’s is their favourite race. Now having done it myself I can definitely agree!”

When asked about her plans to take on the Hout Bay Trail Challenge Van Niekerk just laughed: “how far is it?” 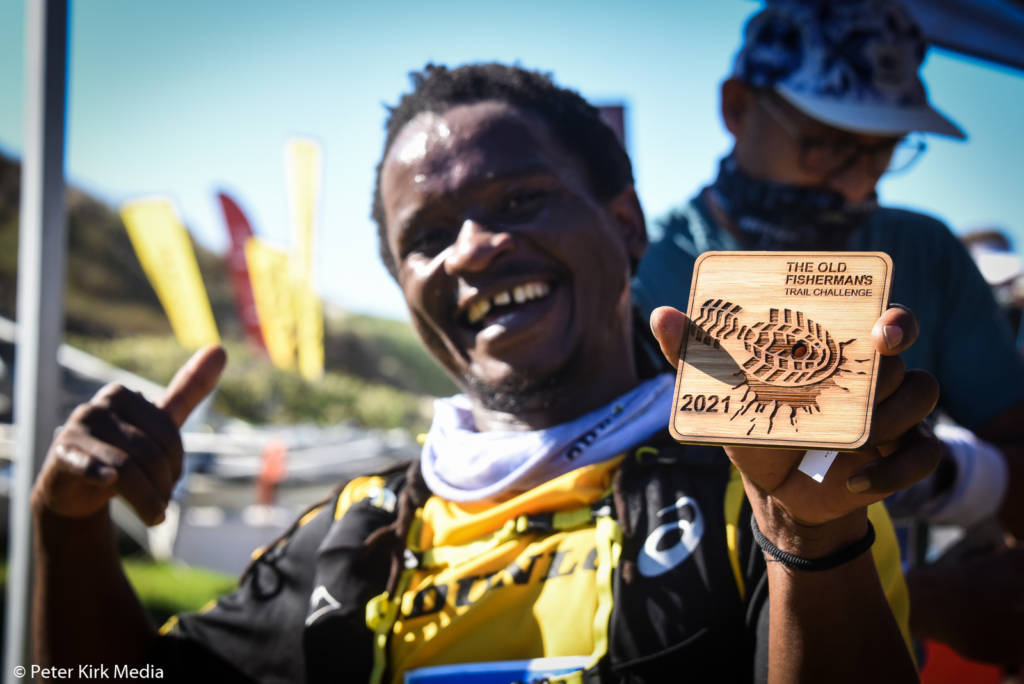 Her winning time was 2-hours, 26-minutes and 4-seconds. She was followed across the line by Samantha Reilly who had found herself engrossed in a conversation about solar panels, mid-race and had taken her foot off the accelerator. Reilly still managed to take in the scenery though. “Fantastic, so beautiful, I loved it” she summarised.

Van Niekerk and Reilly were joined on the women’s podium by Marna van Deventer. The winners were rewarded with beautifully sculpted trophies, by Eric Tollner of Red Earth. In addition to this they, and their companions on the podium, were awarded goodie bags with gifts from the sponsors: Dunlop Tyres, Bamboo Warehouse, MyO2 Recovery Gel, Rock Rabbit Sports, Devil’s Peak Brewing Co and Peninsula Beverages. 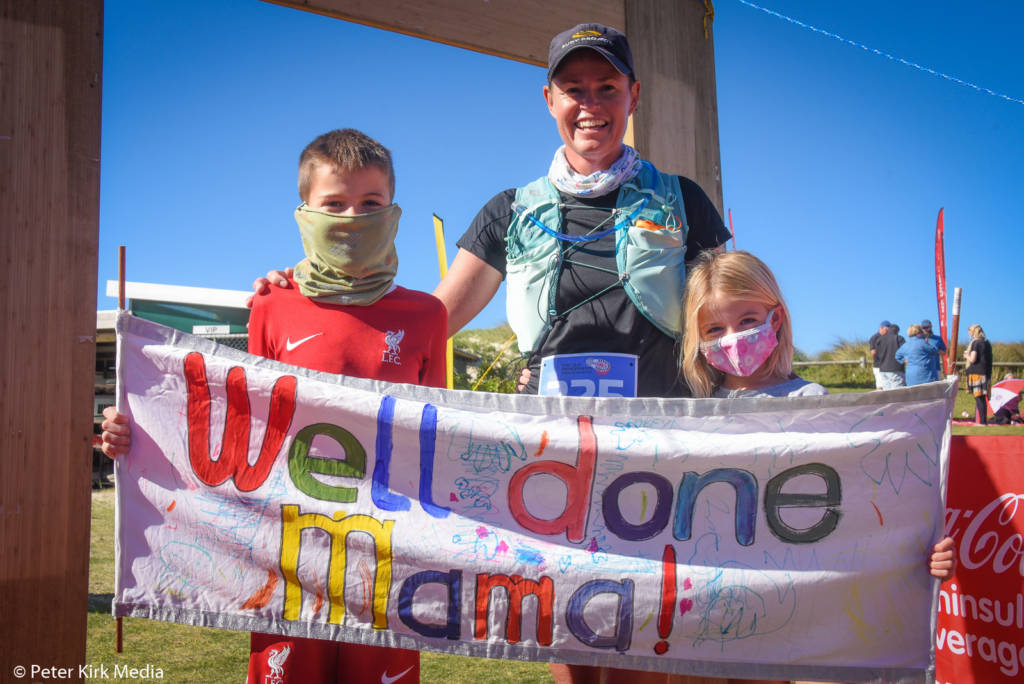 With the finish line being hosted just off Fish Hoek beach there was enough space for friends and family members to gather, safely, to cheer on their favourite trail runners. Photo by Peter Kirk Media.

Cape trail runners can now look forward to the series’ flagship event, the Hout Bay Trail Challenge. The 2021 race is scheduled to take place on Saturday, 24 July. One of the oldest trail runs in the country it features a daunting 40-kilometre course, which circumnavigates Hout Bay in the mountains overlooking the seaside suburb.

Entries are open, but are limited to 250 runners. Visit www.houtbaychallenge.co.za to enter. 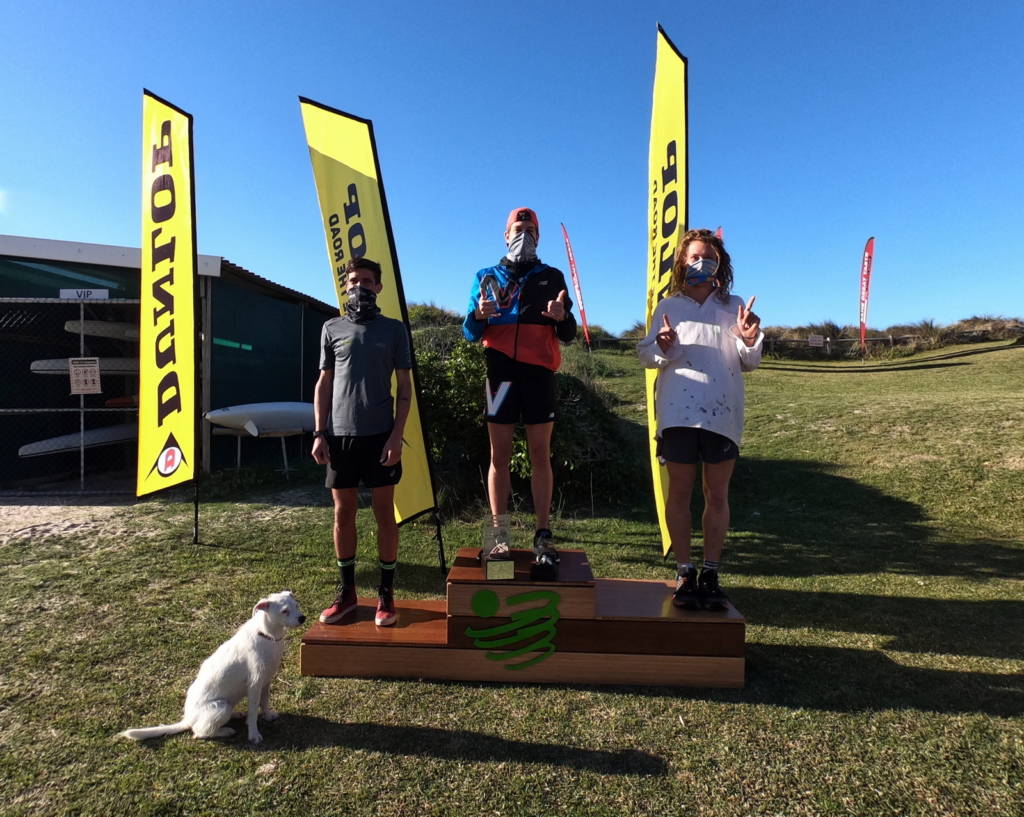 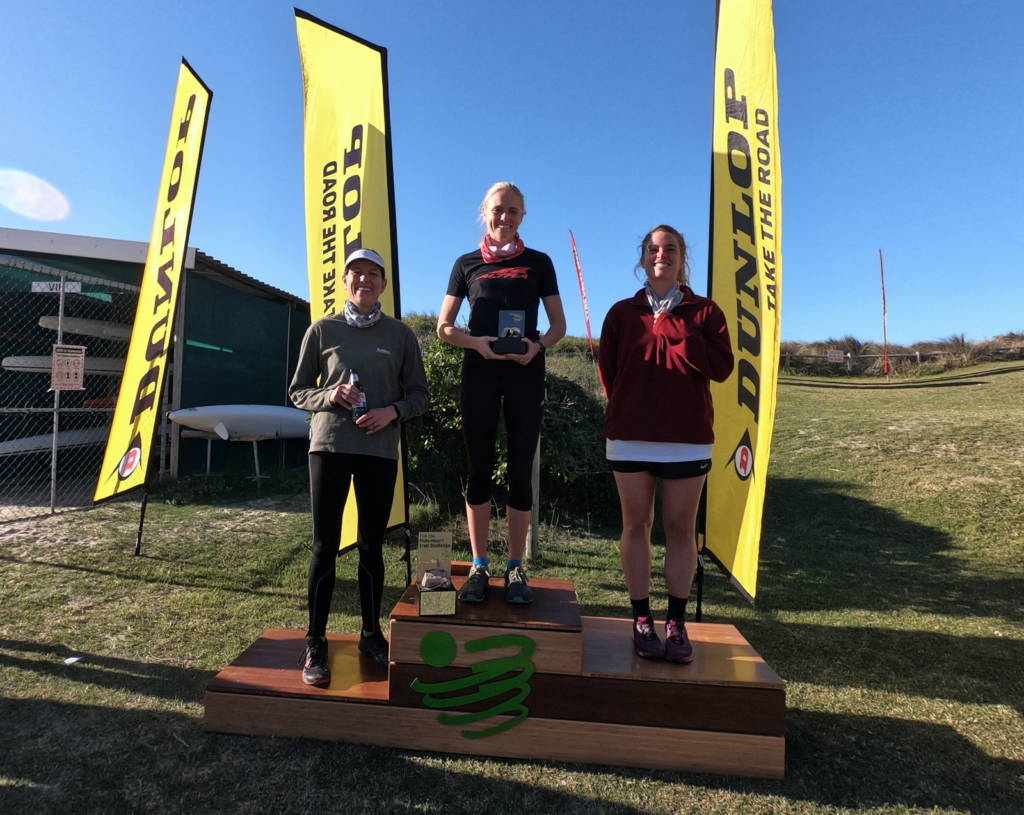