Anyone who has visited the Garden Route city of George knows what a spectacularly beautiful place it is. Nestled against the Outeniqua Mountains, a few short kilometres from the Indian Ocean, surrounded by both lush indigenous and verdant plantation forests. It is an adventure sports Mecca and home to the George Mountain Ultra Trail. In 2021, George Municipality and George Tourism have come on board to support the trail running festival; in order to showcase more of what the city has to offer.

Affectionately known as the George MUT, the trail run was founded in 2017 and staged its first edition in June 2018. Initially the event focused solely on the trail running races, launching with the flagship 60-kilometre ultra-trail event and a tough 25-kilometre. In 2019 the event expanded from a trail run to a trail festival, with the addition of the Vancouver International Mountain Film Festival screening and the Vertical Kilometre. A short distance, MUT Lite was also added to the race day schedule, allowing newer trail runners to also experience the beauty of the George mountains.

In 2021 the event has grown again, offering 60-, 42-, 25- and 10-kilometre distances. These races take place on Saturday, 26 June and form the centre-piece of a long weekend of trail running. Proceedings kick off with the chance to join the George Trail Running for their weekly time trial, on Thursday, 24 June. The free run showcases just how popular trail running has become in the Garden City and how welcoming the local trail community is. It is after all many of the George Trail Running club members who helped reopen the old hiking trails which form the remoter parts of the George MUT route. 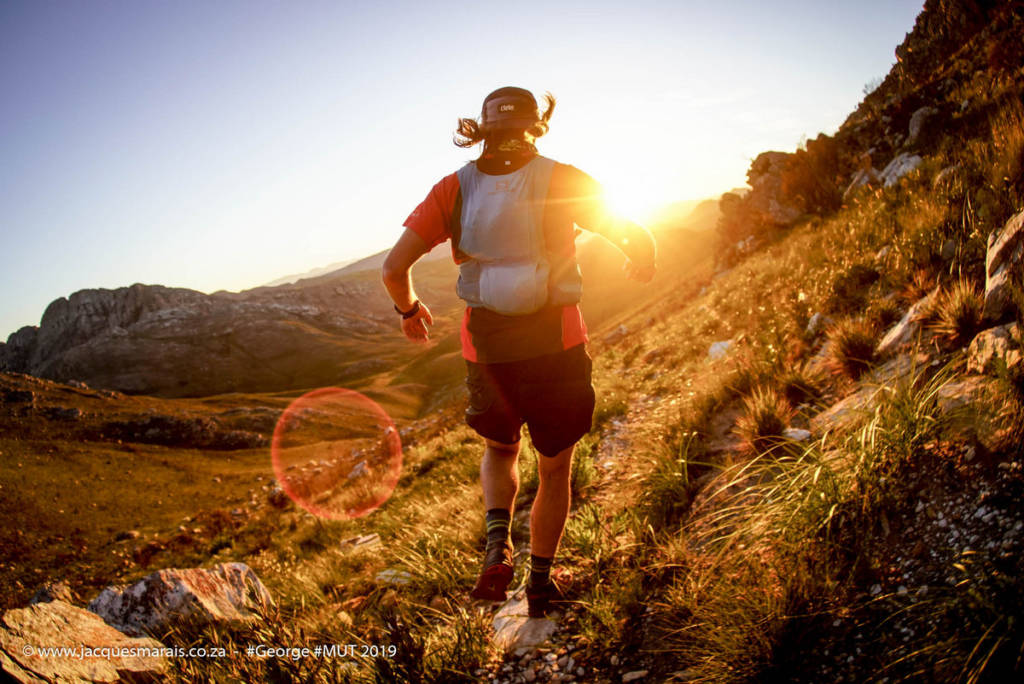 The Outeniqua Mountains above the Garden Route city of George are the perfect trail runner’s playground. Photo by Jacques Marais.

After the races on Saturday, the long weekend concludes on Sunday, 27 June, with the Vertical Kilometre (VK) challenge. As the name suggests the event challenges trail runners to conquer a route with 1-kilometre of elevation gain in just 4-kilometres. The VK starts at the top of Arbour Road, on the edge of the Glen Barrie suburb, and finishes on the summit of George Peak, which overlooks the city and the surrounding area.

“We are super excited to announce a new partnership with our local municipality and tourism bureau, George Municipality and George Tourism” race founder Zane Schmahl enthused. “This partnership means a great deal to George MUT, to be working together with the city to promote our mountains and region. As a long-time George resident, myself, I can attest that it is a fantastic place to live and raise a family. But it is equally amazing to visit. For trail runners, like those taking part in the George MUT there are exceptional trails to run and beautiful mountains to explore.”

“There is a lot to do for non-runners too” Schmahl continued. “George is synonymous with golf of course, thanks to Fancourt; but there is also a plethora of mountain biking trails, world-class waves at Victoria Bay, kayaking and fishing in our rivers and at sea, plus a whole lot more. George’s restaurants, coffee shops and bakeries will ensure no adventure seeker goes hungry; and the accommodation options, from five-star hotels to quaint B&Bs, abound. It really is the perfect place to base oneself when exploring the Garden Route.” 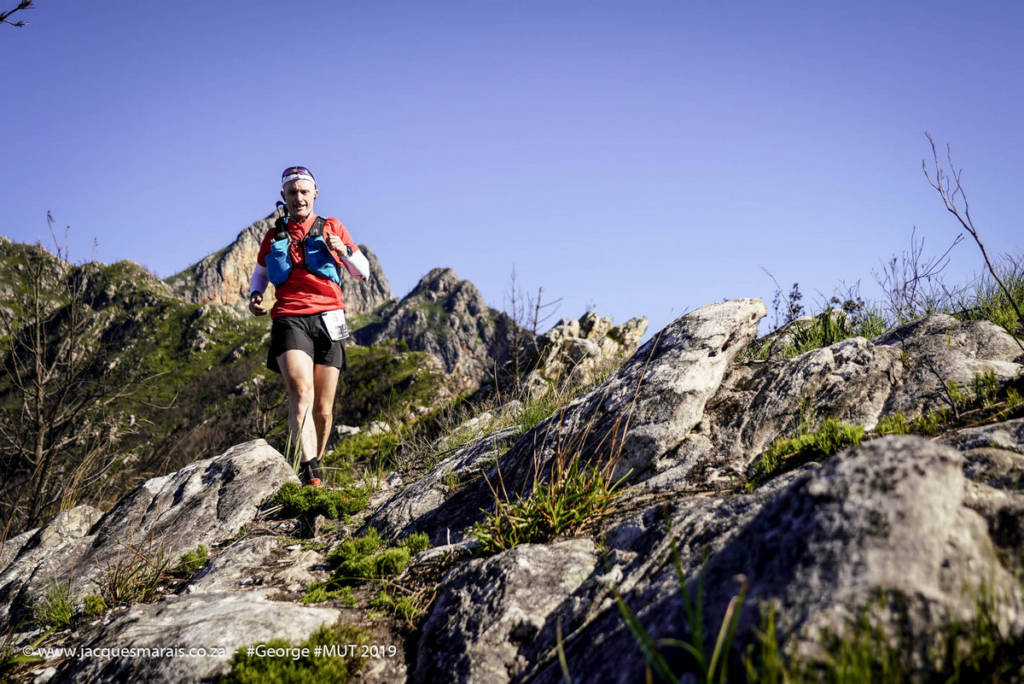 The George Mountain Ultra Trail seeks to showcase the best of its host city, highlighting George as a spectacular place to live or visit. Photo by Jacques Marais.

“We are also fortunate to have the support of a number of great local businesses, particularly Dough Getters Accounting” he thanked. “Doug Getters along with The Cooling Co, Aramex, Spur Steak Ranches and Squirt Cycling Products all have a strong George connection and expressed their desire to help the event continue to grow and to showcase the beauty and sense of community of the city. Cape Nature, are likewise committed to promoting their Garden Route reserves, in particular, through their association with the George MUT. While 30 South Eyewear, Gu Energy, Polar and Bean There Coffee are fantastic supporters of trail running across the country, as well as right here in George.”

“I’d like to thank all our new sponsors for coming on board as we strive to make MUT an event on the global Mountain Ultra calendar. We’re excited to work with George Municipality and George Tourism to grow not only the event but also the region as a destination” Schmahl concluded. 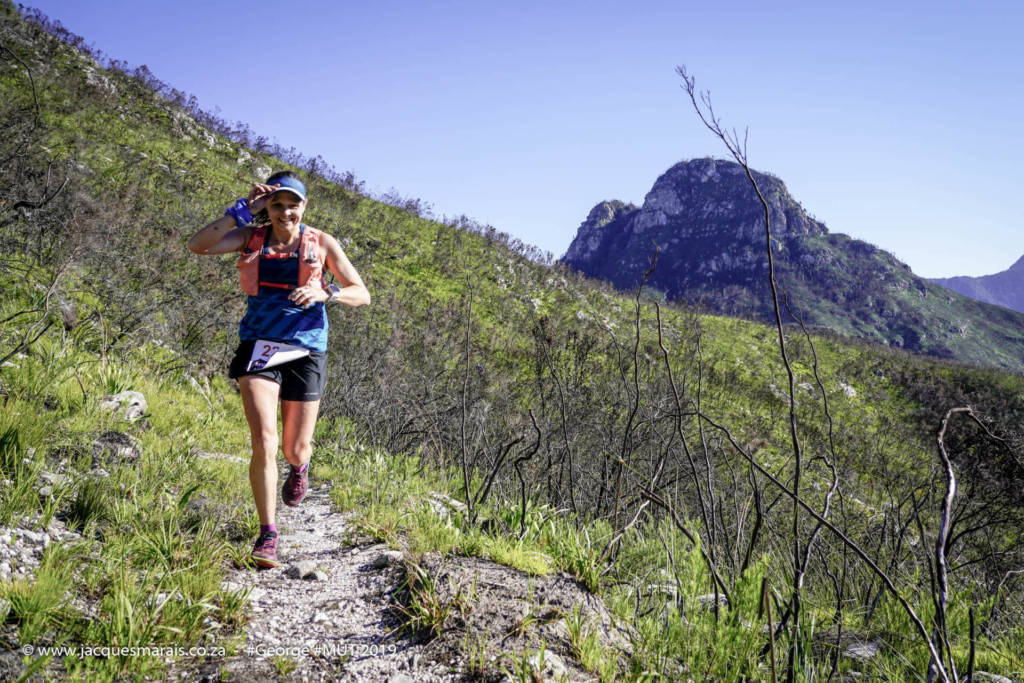 Joan Shaw, Tourism Manager for George, is thrilled to have an event of this calibre on board which will showcase the stunning Outeniqua Mountain range. “Feedback from the event held in 2019 was overwhelming positive and competitors were in awe of the majestic mountains, incredible scenery as well as the professionalism of the organisation of the race itself” she said. “This route boasts everything from big climbs, rocky trails, technical downhills and views of the Outeniqua Mountain Range to keep all athletes engaged and motivated.”

“We are excited to once again host the George MUT as one of the first-class sporting events to showcase George’s many sporting event hosting and tourism opportunities.  George Municipality remains committed to the cause of identifying and partnering with great events to stimulate and develop the George economy”, said Dirk Wessels, Portfolio Councillor for Strategic Services and Finance. 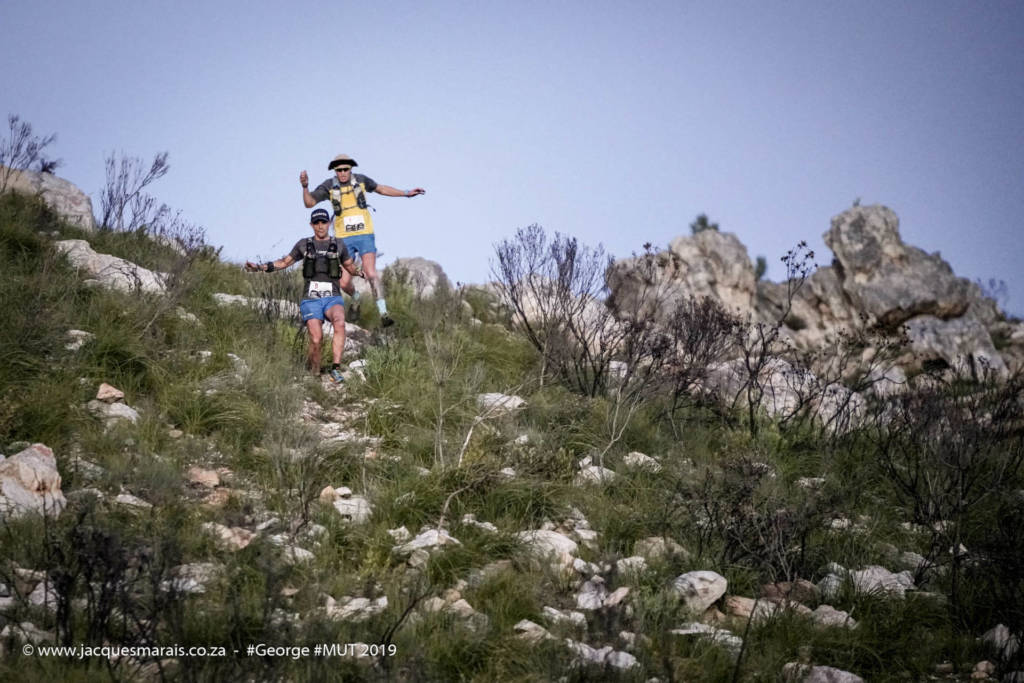