HB Kruger and Matthew Keyser completed a dramatic comeback to claim the 2022 M&G Investments PE Plett title on Saturday, 26 February. The Valley Electrical Titan Racing team had lost over 11 minutes on the opening stage, of the four-day stage race, but fought back to secure the leaders’ jerseys after Stage 3. A clean run from Mentors Kraal, in Jeffreys Bay, to Crossways Country Kitchen, outside Gqeberha, confirmed the pair as the winners of the event’s tenth edition. In the women’s race; Witergreen Ciovita’s Elrika Harmzen-Pretorius and Lehane Oosthuizen were prevented by a final stage mechanical from taking a clean sweep of stage honours, but nonetheless rode to a commanding general classification victory.

Famed for its exceptionally diverse route the M&G Investments PE Plett traces the East Coast of South Africa, straddling the Western and Eastern Cape Provinces. Each year the race switches direction, with the 2022 edition heading north from Natures Valley, near Plettenberg Bay, to Port Elizabeth’s Crossways Country Kitchen. The 290 kilometre long route takes in deep indigenous forests, manicured plantations, pristine fynbos, emerald green pastures and scintillating singletrack. The best was saved for last this year, with the 3Rivers Trails providing 7 kilometres of downhill fun – including the brand-new Dam Busters singletrack – to cap a spectacular four days on the bike. 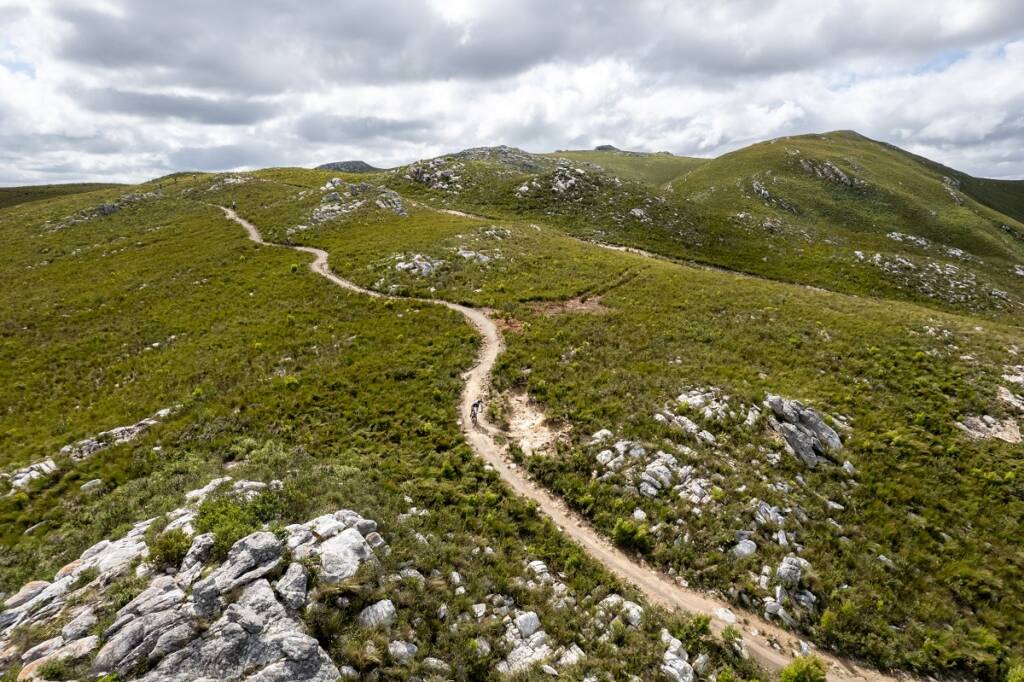 The spectacular 3Rivers Trails, including the brand-new Dam Busters singletrack, provided a fitting finale to four great days on the bike. Photo by Flow South Media.

Off the bike, the event’s cash and card free status sees riders being treated to free beers and wine in the chill zones. That headline selling point is tough to top after a long day on the bike, but the choice of upgrading to hotel accommodation or remaining in the standard two-person luxury canvas tent, the event’s sports massage services and delicious meals run the free bar close. For the majority of the M&G Investments PE Plett field those items were the main draw card, but for the elite teams the opportunity to battle for victory was the key attraction.

Kruger and Keyser probably did not expect to be in contention for the overall win, given how their race began. The Valley Electrical Titan Racing pair conceded 11 minutes and 30 seconds on Stage 1, to the Insect Science Pro team of Keagan Bontekoning and Alan Gordon. Keyser punctured half way through the opening stage. Though he and Kruger were able to plug the hole, the rear tyre continued to leak air throughout the final 30 kilometres, leaving them unable to match Bontekoning and Gordon. 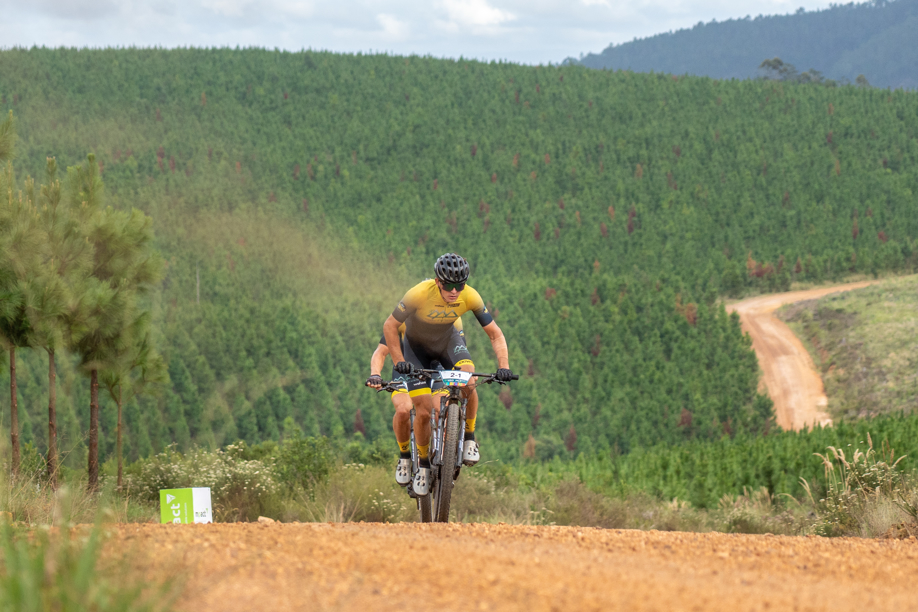 Keagan Bontekoning and Alan Gordon held the leaders’ jerseys for Stage 2 and 3 but ultimately lost out to the Valley Electrical Titan Racing team. Photo by Flow South Media.

On Stage 2 the eventual winners rode their way to a stage victory, clawing their way into second on the general classification in the process. The following day, in tricky conditions after an overnight thunder storm, they completed their comeback. Having battled their way into first they were cautiously optimistic going into the final stage.

“We had a small gap going into Stage 4, so we just needed to ride a bit defensively today,” Kruger explained. “As a result, we waited for the first big climb, which came 40 kilometres into the 70 kilometre stage, and laid down the smack there; to see how hard we could go. Luckily, we opened up a sizable gap and from there we could focus on keeping it steady, staying safe and avoiding punctures.”

“It’s a great feeling taking our first stage race win for the season,” the Valley Electrical Titan Racing man continued. “It’s very important for our sponsors. We’re really happy and excited for the rest of the year.”

“The run in to the finish was awesome! It was my first time coming down the 3River Trails, along the Ox Wagon, Dam Busters and Purple Cow singletracks,” Kruger smiled. “It’s really something special. Coming from Paarl I’m used to riding great singletrack, but this was really right up there. So, credit to the organisers and the route team for adding this amazing section right at the end.” 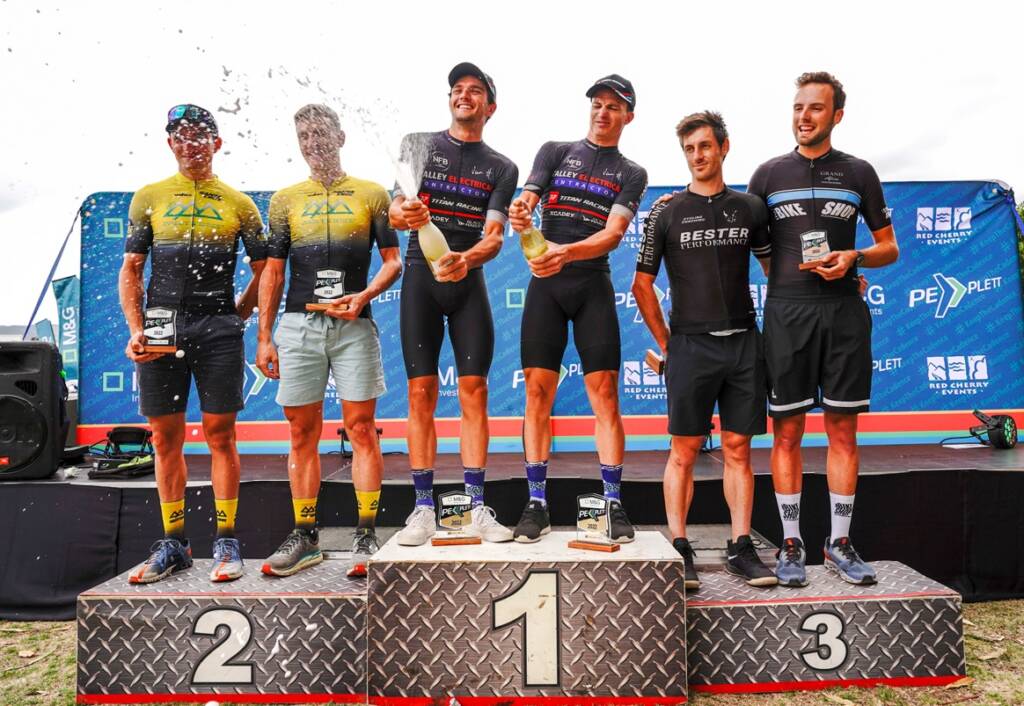 “It was super awesome,” Keyser echoed. “Thanks to the M&G Investments PE Plett for a great four days. The routes were awesome!” 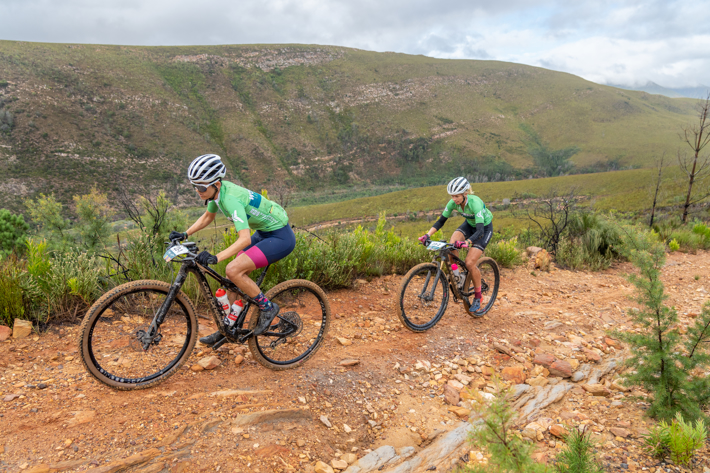 The women’s race at the M&G Investments PE Plett experienced its most dramatic day on the final stage. “We had a little bit of a hiccup today,” Harmzen-Pretorius recounted, understating the severity of their troubles. “I was super nauseous this morning and couldn’t keep anything in. Then on a climb Lehane’s chainring got super bent and we had to hit it with a rock to straighten it out enough to ride it to the finish.”

“It was a long day,” Harmzen-Pretorius puffed. “There was lots of walking in between today,” Oosthuizen added, clearly not quite ready to laugh about it yet. “My Garmin tells me we walked for about half and hour, including up the Queen of the Mountain climb.” 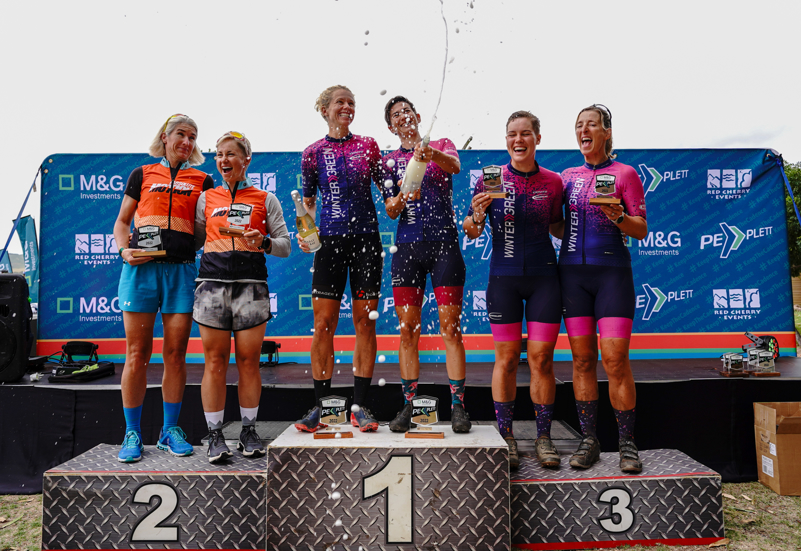 “I was really empty and Lehane pushed me a lot today,” Harmzen-Pretorius confessed. “I’m very grateful to her and thankful of her exceptional teamwork.”

The Wintergreen Ciovita team’s struggles on the final day allowed the Young & Brave squad, of Tanja Schutte and Iliska Verwey, to claim the stage win. Yet Harmzen-Pretorius and Oosthuizen had more than enough time in reserve to secure the overall title in a time of 15 hours, 2 minutes and 6 seconds. Schutte and Verwey were second, with TFG-Barrier Breakers’ Jane Fisher and Renata Bossie securing third. 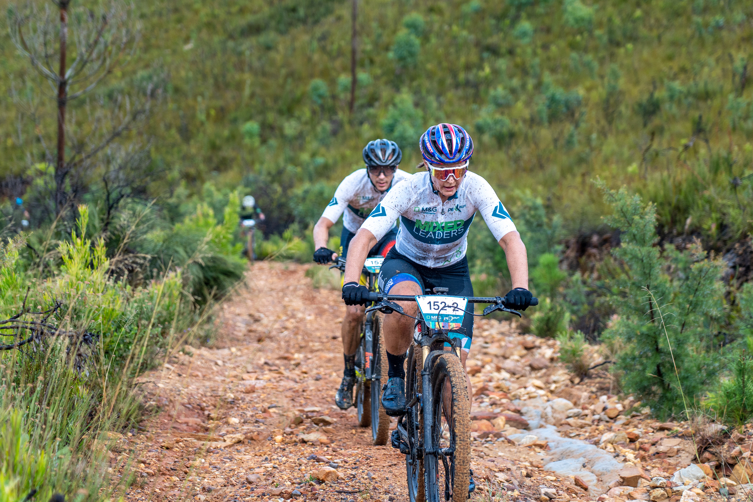 The Mixed Category race was closely fought all event, yet Samantha Sanders and Conway Oliver were able to win all four stages. They were joined on the final, general classification, podium by Nicola Freitas and Grant Daly, as well as by Lastminutetraining.com’s Mandi and Wesley Augustyn.

With the titles wrapped up it is time to reflect on a decade of M&G Investments PE Plett races. To do so and to view all the photos and videos from the 2022 event mountain biking fans can relive the action on social media. Follow @pe_plett on Instagram or like the M&G PE Plett Facebook page.

Entries to the 2023 event, which is scheduled for late February once more, will open in March. 2022 riders will receive priority access to the 300 entries before they are opened to the general public. In order to aid riders, the race has a down payment entry policy; where riders reserve their spot with a R1 500 deposit and only have to make a final payment at the end of November 2022.  For more information visit www.peplett.co.za. 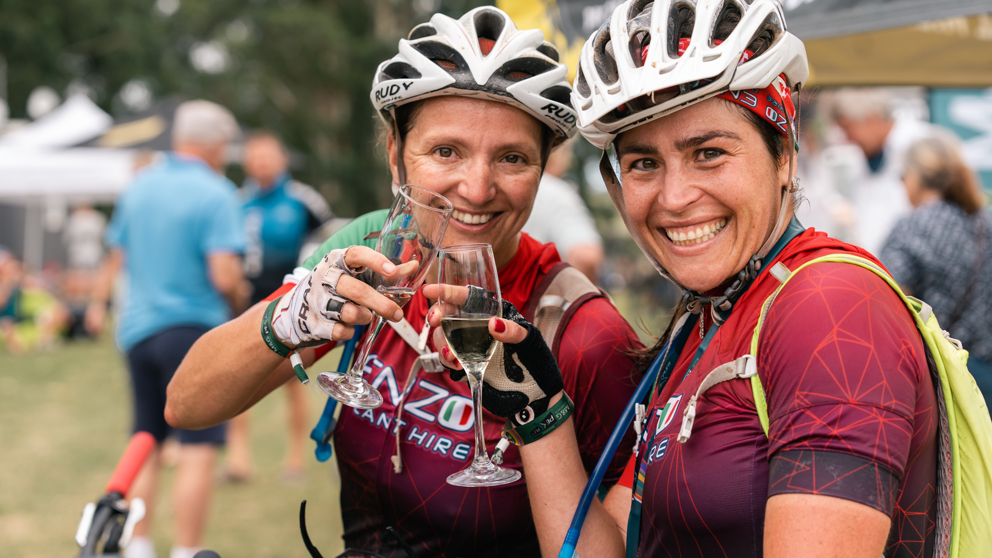