“I actually started my profession triathlon career, in 2012, on Giant Bicycles” Weiss noted. “Before turning pro I worked at William’s Bike Shop in Somerset West, which is a Giant dealer, so the brand is very close to my heart. Over the last few years, I’ve noticed the massive step forward Giant have made with both their Anthem cross-country and Trinity time trial bikes. So, the brand really caters perfectly to my needs as an athlete. It feels great to be stepping back onto a Giant, it’s taking me back to my roots as a triathlete and reigniting my passion for the sport.”

“It’s amazing to have Brad on Giant Bicycles!” Giant South Africa’s Marketing Manager, Max Sullivan, enthused. “He’s a uniquely South African athlete, mixing off-road triathlons – which we’re obviously famous for, as a nation, thanks to the likes of Conrad Stoltz – and IRONMAN events, which South Africans love participating in. That dual focus makes him the perfect athlete us to support. That and Brad’s professionalism, easy going nature and status as one of the world’s best triathletes of course. Adding Brad to our pool of Giant and Liv athletes further adds to the strongest roster of riders we’ve ever assembled as Giant/Liv South Africa. Having high performance athletes on our bikes is a key part of the Giant marketing strategy and as such Brad’s signing builds on the visibility of Giant Bicycles at the world’s biggest cycling and triathlon races.” 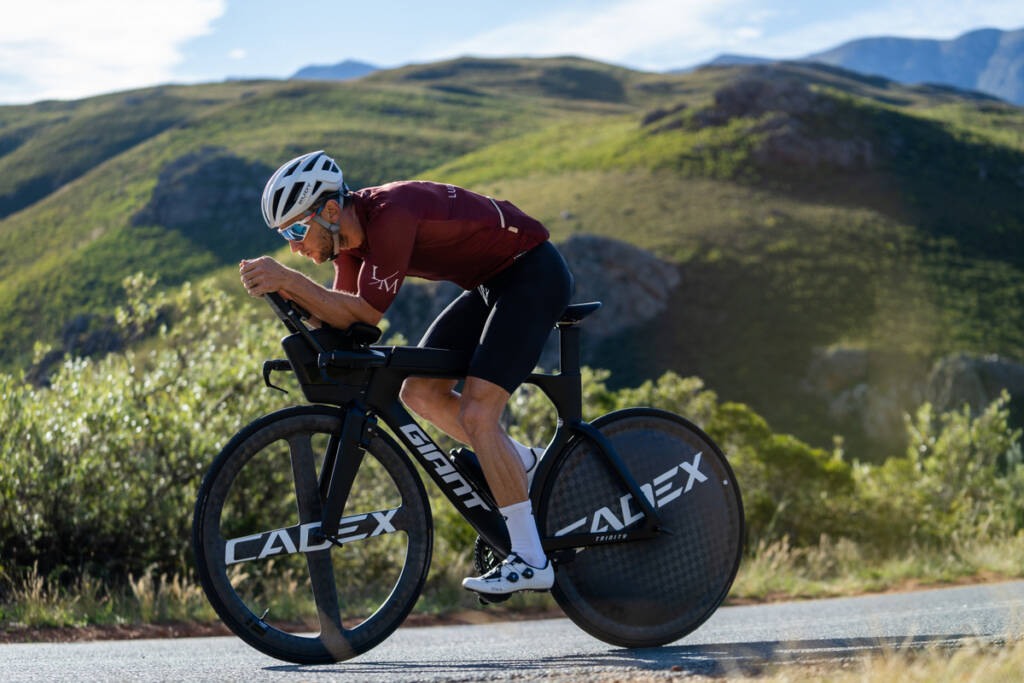 South Africa’s double XTERRA World Champion, Bradley Weiss, will be racing aboard Giant Bicycles for 2022 and beyond as he shifts his focus to middle- and ultra-distance road triathlons. Photo by Kevin Sawyer.

“Giant have been really visible in the triathlon space in recent years,” Weiss pointed out. “The Norwegians, including current Olympic and World Champion Kristian Blummenfelt, have been very influential in the research and development side of things, which Giant have played a key role in.  They’ve also just released a new Anthem Advanced XC bike, which looks very impressive.”

“My aspirations, as an athlete, are more towards IRONMAN,” he revealed. “So, I’ll be doing most of my racing aboard the Giant Trinity. It’s been the best part of a decade since I last rode one and it’s been incredible to see how the bike has developed in that time. When you earn your bread and butter with performances, you can’t afford to give anything away to your rivals when it comes to equipment. Giant’s attention to detail, really crossing their T’s and dotting their I’s, instils tremendous confidence in me for what I’ll be able to achieve on their bikes.”

“My attributes as a triathlete lead me to target events with hilly bike courses, which plays to the strengths of the Trinity too” Weiss smiled. “It’s a really minimalist and light so it suits my style perfectly. I’ve been putting in the training kilometres on the TCR Advanced already too. I don’t do much shorter distance racing, so I won’t be riding it as much in events, but it’s incredibly light. I think mine is around 6.1 kilograms. It’s so amazing to be back on a TCR!” 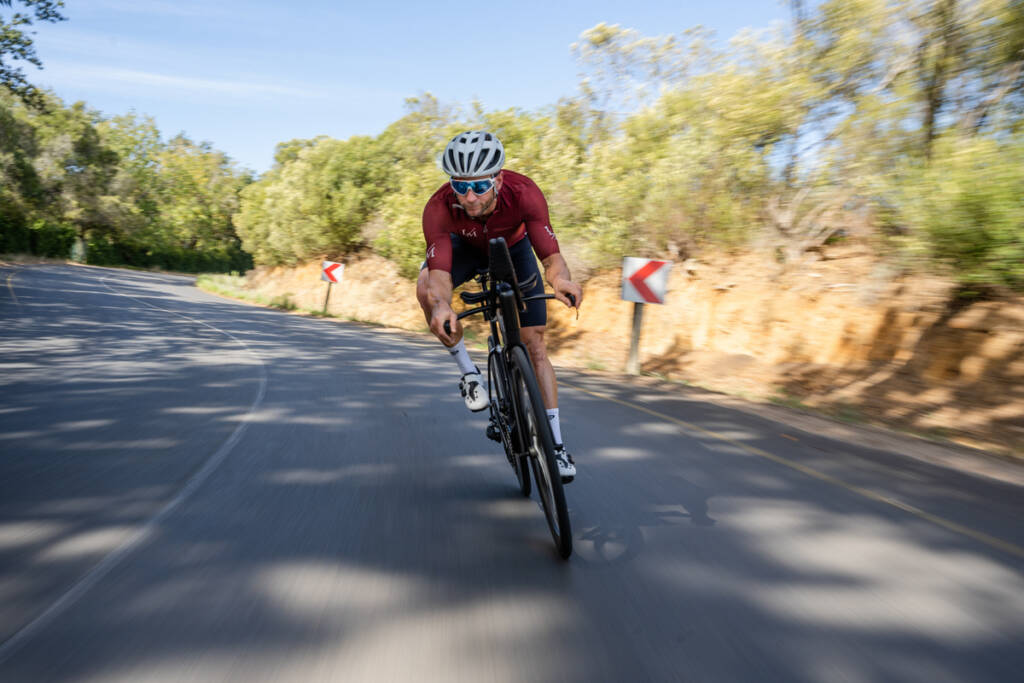 Bradley Weiss says the light weight and minimalist design of the Giant Trinity makes it a perfect match for his riding style, which is best suited to races with hilly bike courses. Photo by Kevin Sawyer.

“Having placed seconds at the IRONMAN African Championships, on the 3rd of April, I’ve qualified for the IRONMAN World Championships, in October,” he continued. “The Kona course really suits me, I feel, so the main focus for the year is getting to Hawaii in the form to be able to contest for victory. I’m really excited to finally get out to the Big Island and race against the top IRONMAN athletes in the world.”

“On the nearer horizon I’ll be racing the Sun City Ultra this weekend [8 May],” Weiss stated. “It’ll be my first outing on the Giant Trinity, and I can’t wait to feel how it performs in race conditions! Thereafter my next target is the IRONAMN European Championships, in Frankfurt, and hopefully some XTERRA Racing. Alongside my big full IRONMAN goals, I’m excited to see how fast I can go in the middle, or 70.3 distance events. PTO’s Tour Events are also races I’m particularly looking forward to this year. The Canadian Open and the American Open are two of my main middle-distance goals for the season.”

“We can’t wait to see Brad in action, racing a Giant Bicycle equipped with CADEX Wheels,” Sullivan concluded. “His race schedule is exciting and Giant South Africa are looking forward to supporting Brad as he pursues his racing goals in the coming years. Given his success on Hawaii in XTERRA we’re hoping the islands will continue to be a happy hunting ground for him.” 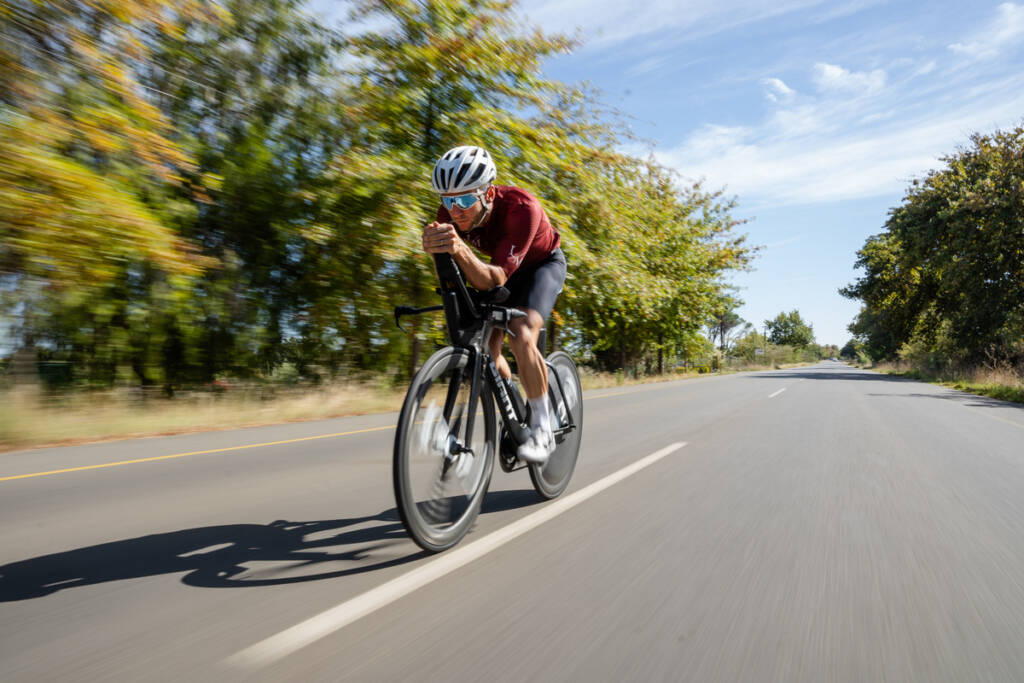 Bradley Weiss’ first outing on Giant Bicycles, in nearly a decade, will be at the Sun City Ultra, on the 8th of May 2022. Photo by Kevin Sawyer.

Weiss will not only be riding Giant Bicycles but he will also be racing with CADEX Wheels in 2022 and beyond. Giant’s wheel brand specialises in creating wheel-sets which provide maximum power transmission, optimal aerodynamics and total control, all at an ultra-light package.