The 2022 Muizenberg Trail took place in wet and wild conditions on Saturday, 2 July. With a cold front blowing in on a stiff north westerly wind the day dawned blustery but still dry. As the morning progressed the rain arrived dousing the trail runners as they took on the 21 kilometre route through the mountains overlooking False Bay.

“The route was a lot more runnable this year, or had more runnable sections,” James Day, who finished fifteenth pointed out. “Last year it was either straight up or straight down. It was still technical but I appreciated the inclusion of more contour trails.” 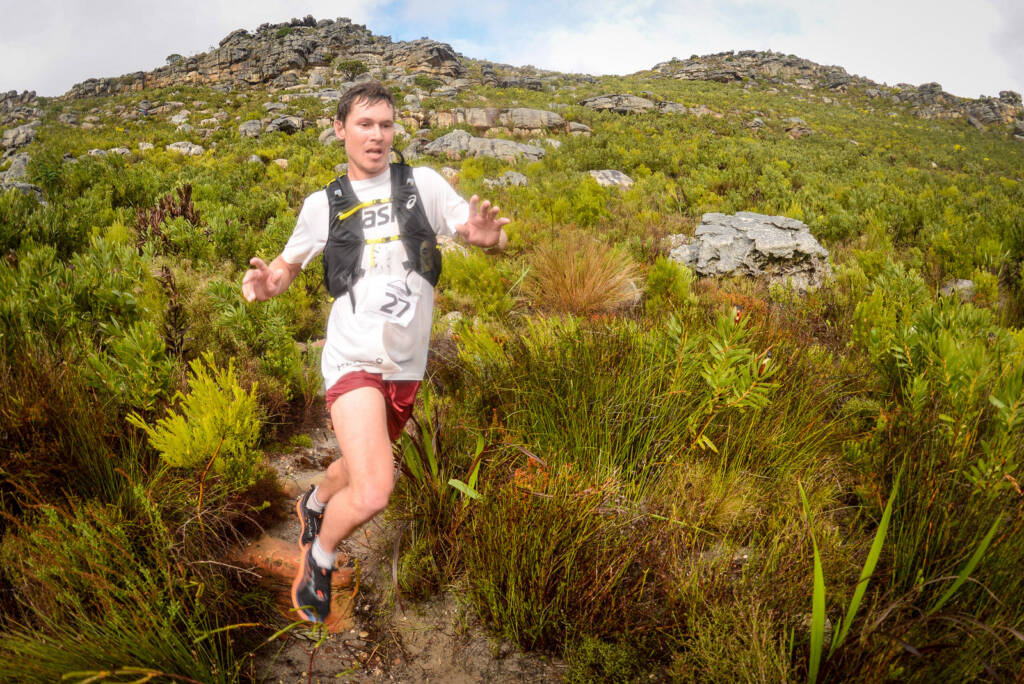 The course was still technical enough to suit the mountain running strengths of Robert Rorich however. Just two weeks after running a 100 kilometre ultra the sculptor and trail runner still had to leg speed to outpace Kyle Bucklow and the defending champion, Jarryd Dunn. Rorich started conservatively before coming into his own after the ascent of the Silvermine trail to Muizenberg Peak Saddle. Over the next 6 kilometres he worked his way into the lead.

He and Bucklow summited Bailey’s Kloof within touching distance of each other, with Dunn keeping the leaders in his sights behind. Once out front, Rorich never looked back; slowly extending his advantage to 1 minute and 46 seconds by the time he crossed the finish line. Bucklow finished second, just over 2 minutes ahead of Dunn. Kelton Miller and Kyle Nortje completed the men’s top five. 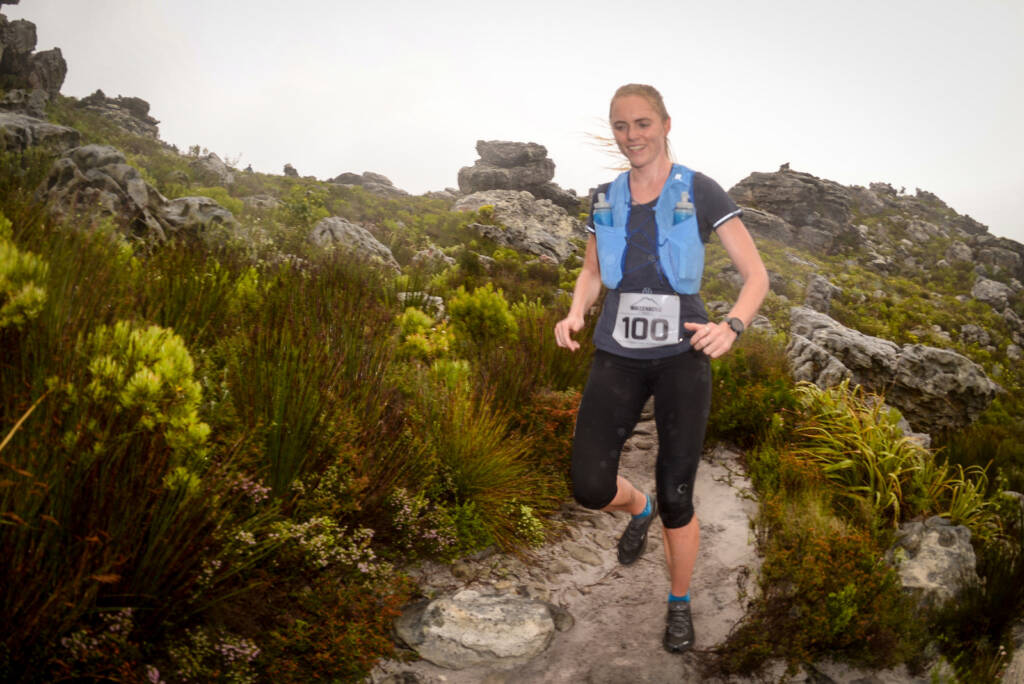 Lijan van Niekerk was unable to defend her title, losing out to Nadine van Driel. Photo by Peter Kirk.

The women’s race was more of a see-saw affair, with the defending champion Lijan van Niekerk initially striking out in the lead with Natalie van Reenen. Nadine van Driel stormed through the second half of the course however, claiming the lead and running home strong, to the Sea Scout Base in Lakeside. Van Driel’s winning time was 2 hours, 47 minutes and 32 seconds, just 32 seconds ahead of Van Niekerk. Lisa Pringle completed the podium after van Reenen faded to fourth. Julie Huckle was the first of the women’s masters’ athletes home, placing fifth overall in the women’s race.

The Muizenberg Trail was the second in a triple header of winter trail runs. The first was the Old Fisherman’s Trail Challenge, in June. On the 23rd of July the Hout Bay Trail Challenge brings the series to its conclusion. One of Cape Town’s original and most iconic trail runs the 42 kilometre marathon route circumnavigates Hout Bay, taking in Suther Peak, Woodhead Dam and Vlakkenberg before finishing with a sprint across the beach. 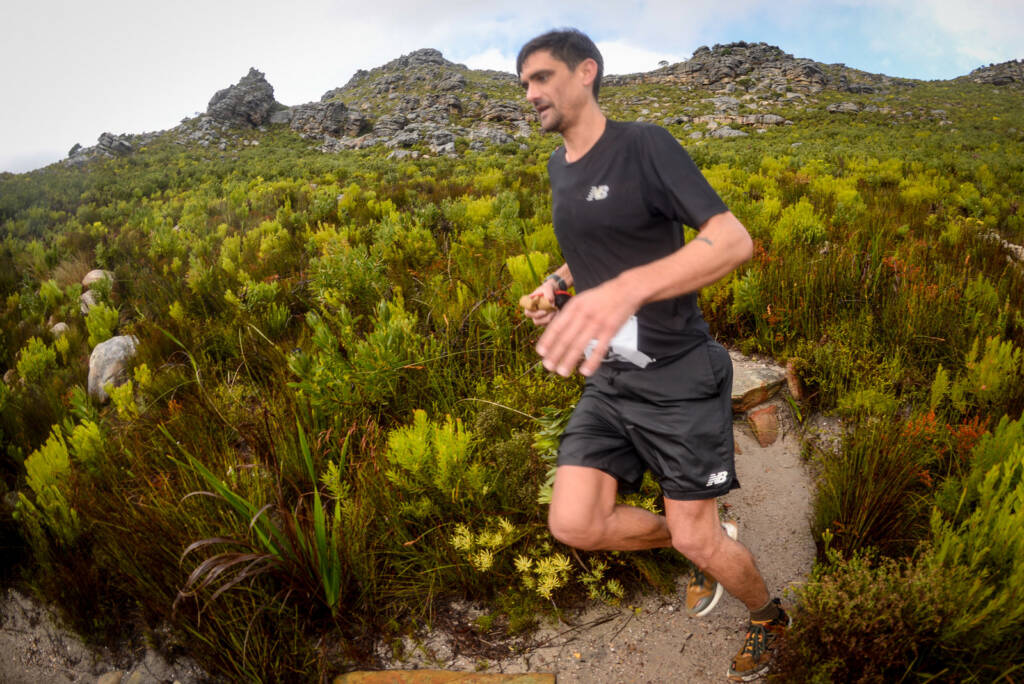 Kyle Bucklow was unable to follow up on his Old Fisherman’s Trail Challenge success and had to settle for second behind Robert Rorich at the Muizenberg Trail. Photo by Peter Kirk. 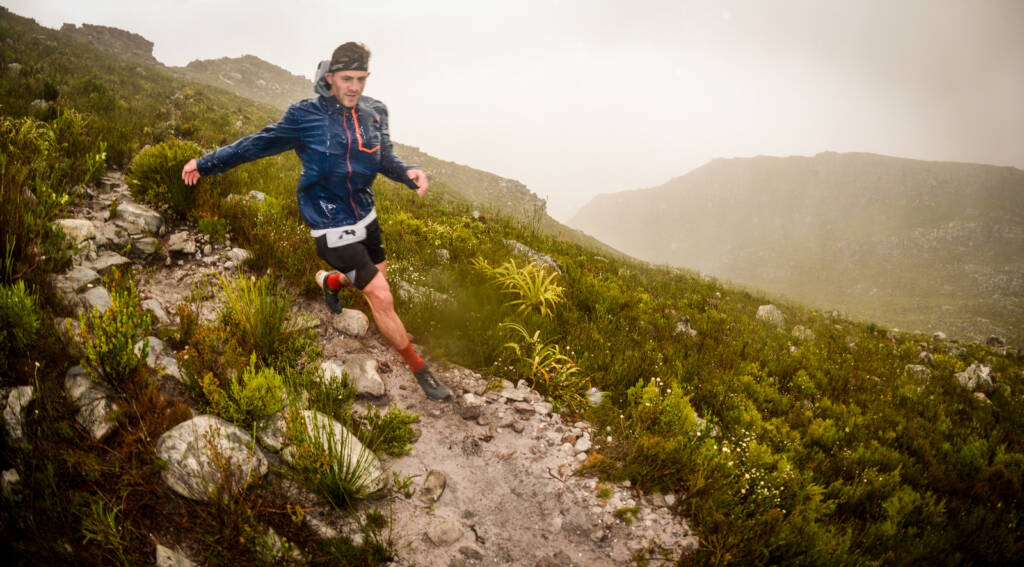 The strong north-west wind and persistent rain made for challenging conditions in the Muizenberg mountains. Photo by Peter Kirk.

To view the full results from the 2022 Muizenberg Trail please click here.