The 55 kilometre stage packed in 1 850 metres of climbing and lots of technical trails. These and the strenuous ascents to Tierkop and Dizzy Heights provided testing terrain which ensured exciting racing. The rising wind also affected the race, with team tactics and cagy manoeuvres playing their part. 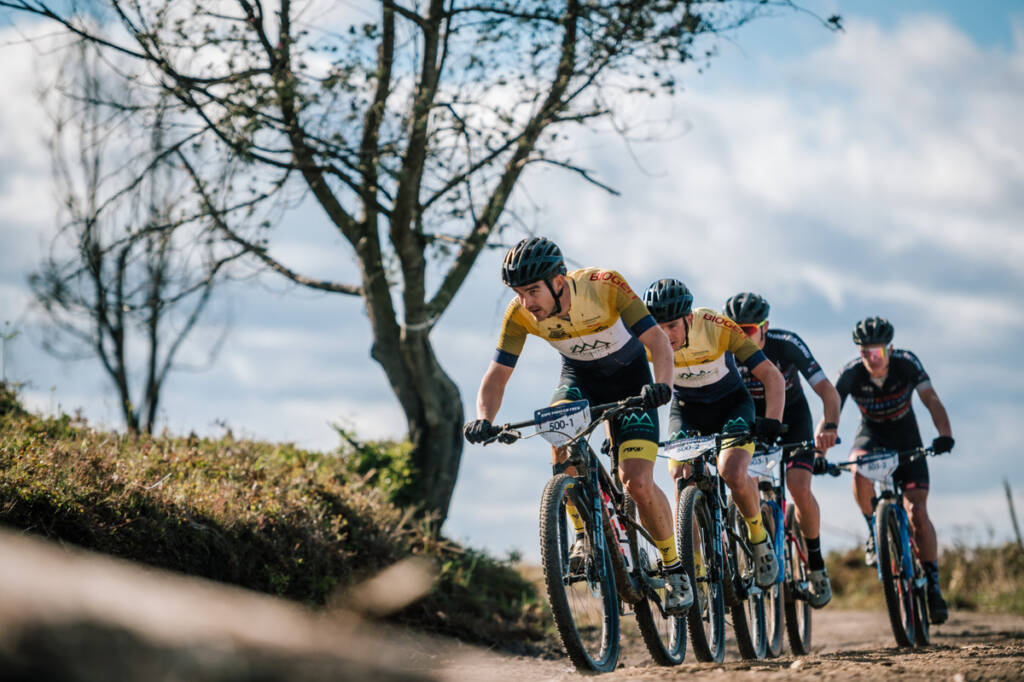 Arno du Toit reported struggling early on but the Insect Science rider found his rhythm later in the stage and avoided conceding any time to the stage winners. Photo by Justin Reinecke for zcmc.co.za.

Imbuko {type}DEV took the fight to Insect Science Pro from the off. Joubert set a blistering tempo on the climb to Tierkop which split the field. Only the men in the yellow First Ascent jerseys and the Valley Electrical Titan Racing team were able to follow the two Imbuko {type}DEV squads. The descent that followed spread top four teams out, but a headwind stretch allowed for a brief regrouping.

“I think my mental limit was set a bit low this morning,” Arno du Toit joked. “I struggled to match the Imbuko {type}DEV guys on those climbs, but Keagan [Bontekoning] and I rode our own pace. We focused on staying smooth in the trails and caught back up to them again.” 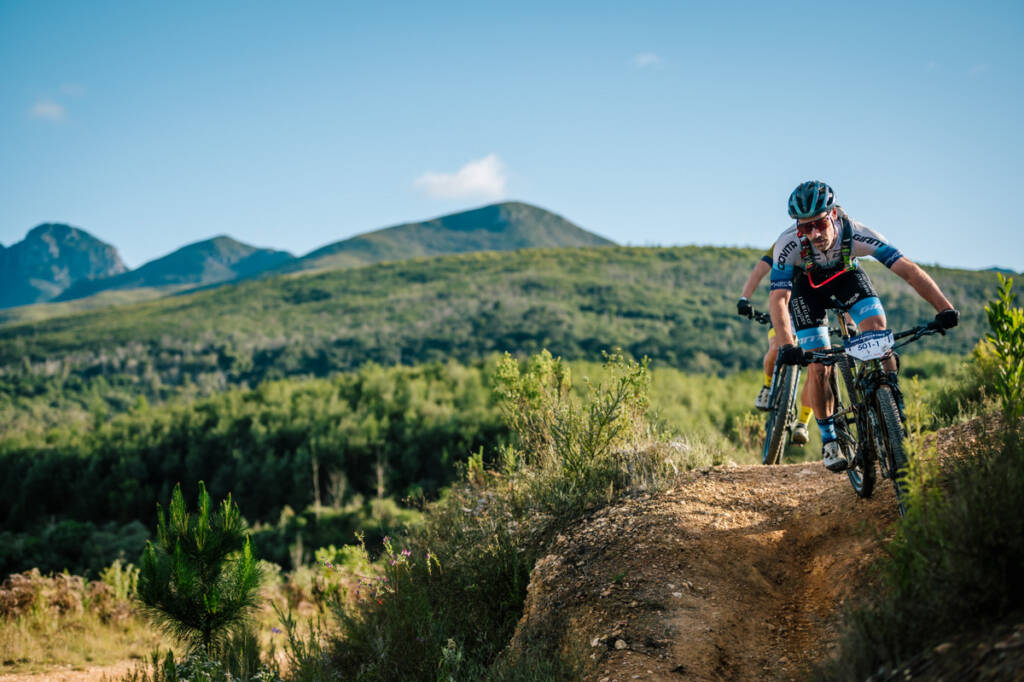 Marco Joubert’s aggressive descending contributed to the Imbuko {type}DEV rider crashing while leading Stage 1, which allowed Insect Science to regain parity on the trails. Photo by Justin Reinecke for zcmc.co.za.

“We got away on the second long climb and then Wessel [Botha] and Rudi [Koen] bridged across to us,” Joubert explained. “Unfortunately, Wessel punctured, so they couldn’t help us for too long in the wind. Then on a grassy descent I had probably my biggest crash of the year. I’m not really sure what happened, suddenly I was going over the bars and tumbling across the trail. Fortunately, I was okay, but while I was getting up Insect Science caught us.”

“The fall really knocked my confidence, so we were content to follow Arno [du Toit] and Keagan [Bontekoning] for the rest of the stage,” Joubert continued. “They tried a few attacks, but with the headwind we could stay in their wheels pretty easily. We waited until we turned off the road into the race village before we attacked and managed to take the win in a sprint.” 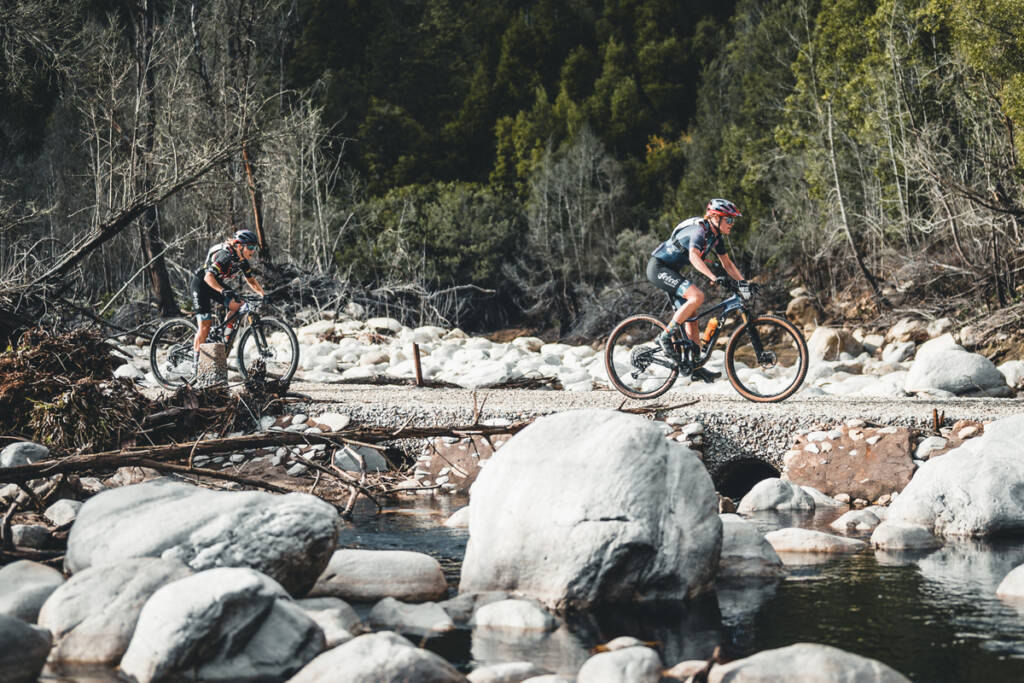 Theresa Ralph and Kim le Court stormed to stage victory on Stage 1 of the Momentum Medical Scheme Cape Pioneer Trek, presented by Biogen. In so doing riding their way into the pink First Ascent leaders’ jerseys. Photo by Sage Lee Voges for zcmc.co.za.

With nothing separating the Imbuko {type}DEV A and Insect Science Pro teams on the line the general classification standing remains unchanged. Arno du Toit and Bontekoning still lead Joubert and Pieter du Toit by 11 seconds. Imbuko {type}DEV B’s Botha and Koen, who finished third on the stage remain third overall, 5 minutes and 59 seconds behind the race leaders. Valley Electrical Titan Racing are fourth on the general classification standings, with Varsity College moving up to fifth.

There were more changes in the women’s overall standings. Theresa Ralph and Kim le Court went on the offensive relatively early in the stage. “We followed Yolande [de Villiers] and Stephanie [Wohlters] initially to see how they were riding, then upped the pace and rode our own tempo,” Le Court said. “The route was amazing today and we had great fun out there. The Momentum Medical Scheme Cape Pioneer Trek, presented by Biogen, is still long… but it’s good to be in the leaders’ jerseys now.” 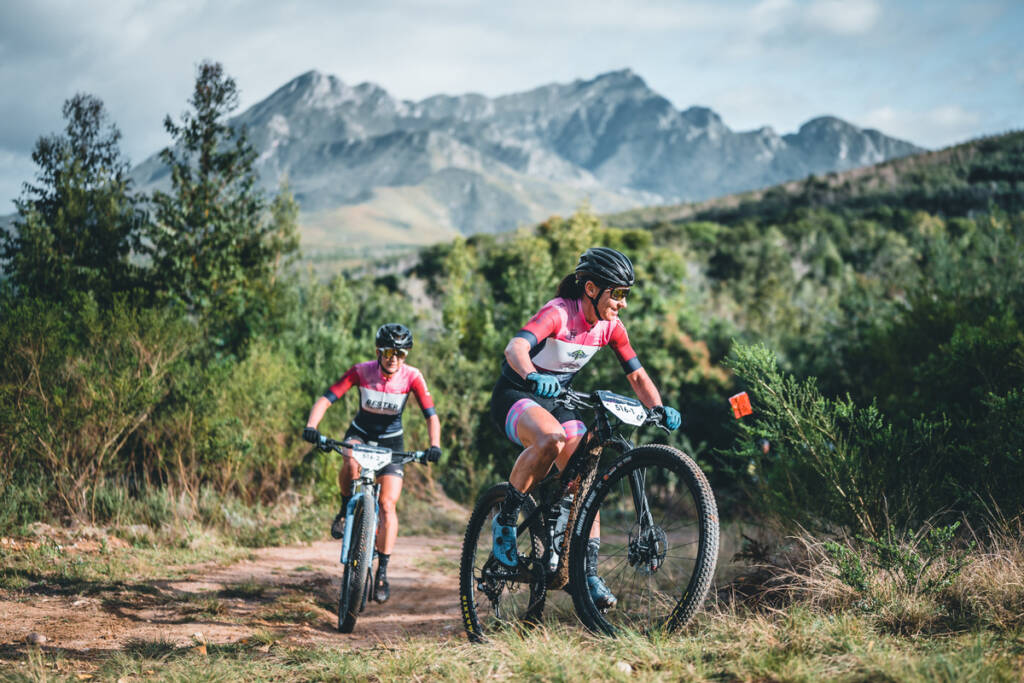 Efficient Insure Infiniti Racing’s winning margin was 7 minutes and 50 seconds over Madmacs/Coopetto/Bester Performance. This sees Ralph and Le Court move into the general classification lead and take a 6 minutes and 54 second advantage into Stage 2. Behind the top two teams Ila Stow and Robyn Williams leapfrogged Kylie Hanekom and Tarryn Povey to move into third overall. The Clickatell women are 16 minutes and 43 seconds off the leaders heading into the first transition stage.

Tuesday’s Stage takes the race out of the Garden Route into the Langkloof. Starting with more of George’s fabled singletrack the route ascends the historic Montague Pass and traces the northern slopes of the Outeniqua Mountains to Louvain. The 76 kilometre long course includes 1 900 metres of climbing, with a potentially decisive 5 kilometre climb coming in the final 15 kilometres of the day. To see if it will indeed provide the opportunity for teams to distance their rivals follow the racing on social media. Like the Momentum Medical Scheme Cape Pioneer Trek, presented by Biogen, Facebook page, follow @CapePioneerTrek on Twitter and follow @capepioneer on Instagram. For more information visit www.capepioneer.co.za. 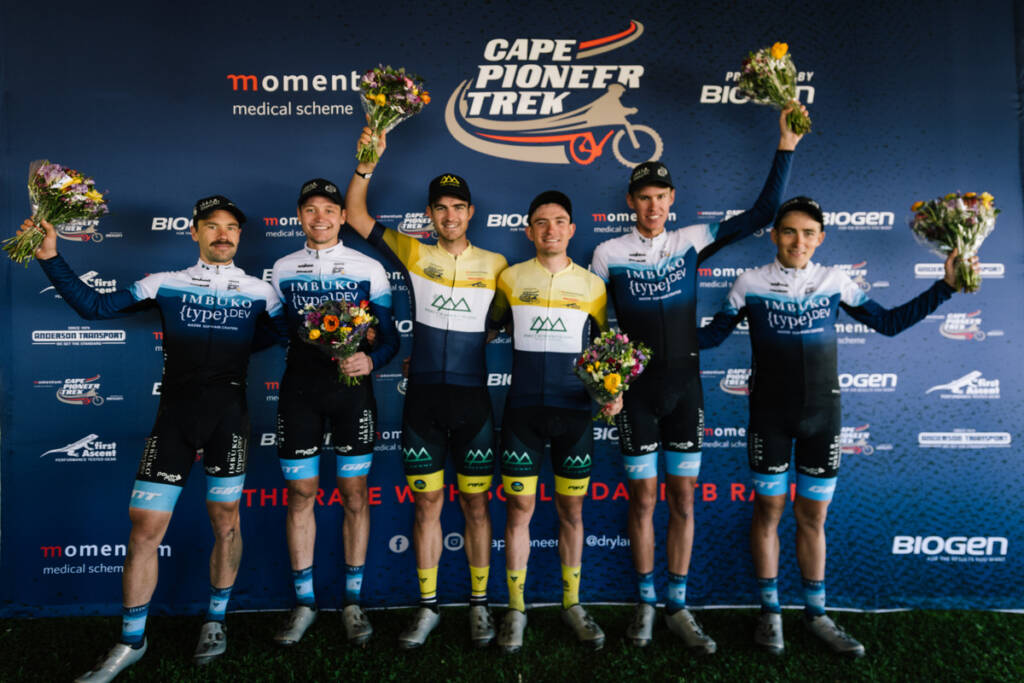 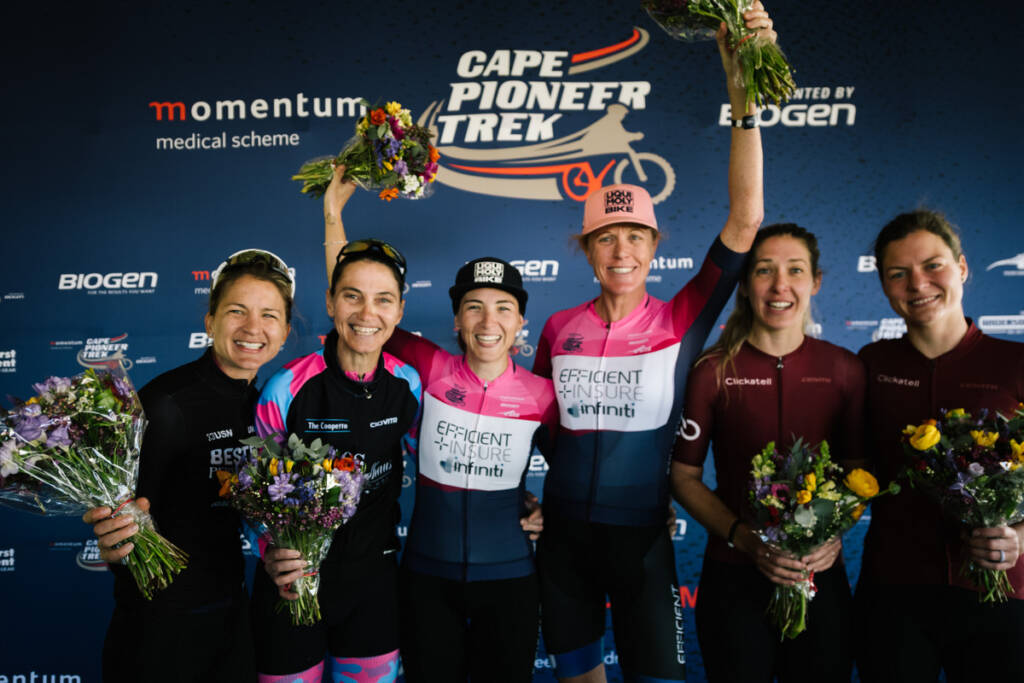 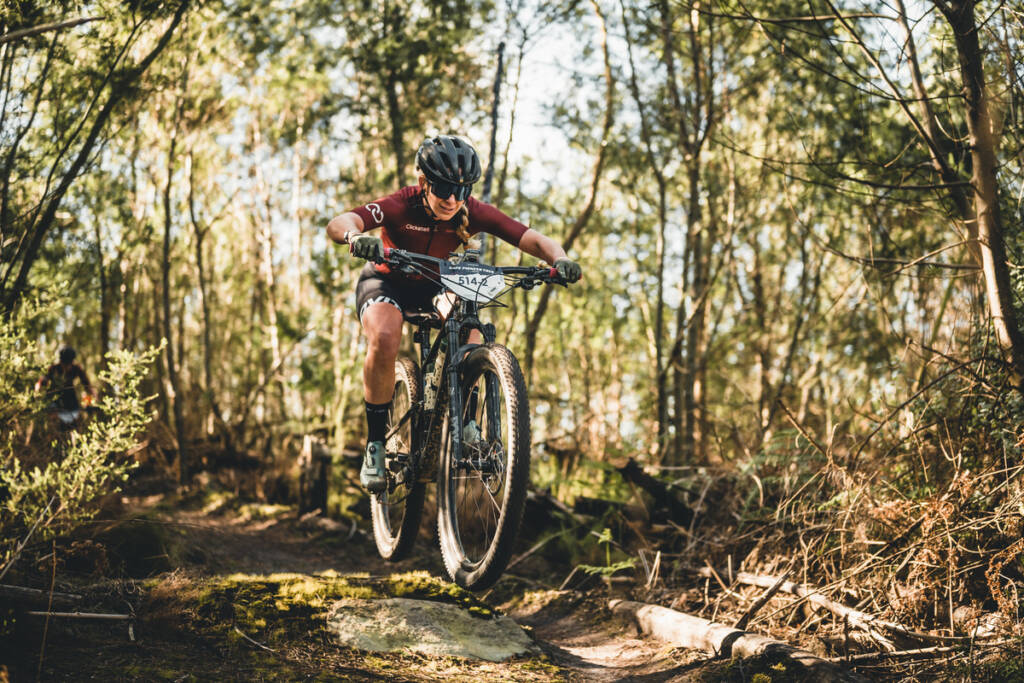 Ila Stow exploited her superb technical skills to lead Robyn Williams through the trails and to third position on the stage. Photo by Sage Lee Voges for zcmc.co.za.