Stage 3 of the 2022 Momentum Medical Scheme Cape Pioneer Trek, presented by Biogen, took in a circular route from Louvain Guest Farm, in the Langkloof, on Wednesday, 7 September. The elite men’s race was a relatively measured affair which played out in a four-up sprint after 63 kilometres of racing. In the women’s race there was late drama, with two mechanicals and the pink First Ascent jersey wearers having to run a bike into the finish. Despite that the Efficient Insure Infiniti team only lost 36 seconds of their overall lead.

For the men the only point in the route where they could make a decisive move was the first climb, which came just 5 kilometres into the stage. The technical ascent of Duiwelskop allowed Insect Science Pro to split the field, but the climb was not long enough to distance their top three rivals. Imbuko {type}DEV’s A and B squads, as well as the Valley Electrical Titan Racing team followed Arno du Toit and Keagan Bontekoning through the rugged terrain. There was a nervous moment for HB Kruger when a large stick got lodged in his spokes, but after breaking a wheel the day before he was quick to stop before damage could be inflicted. 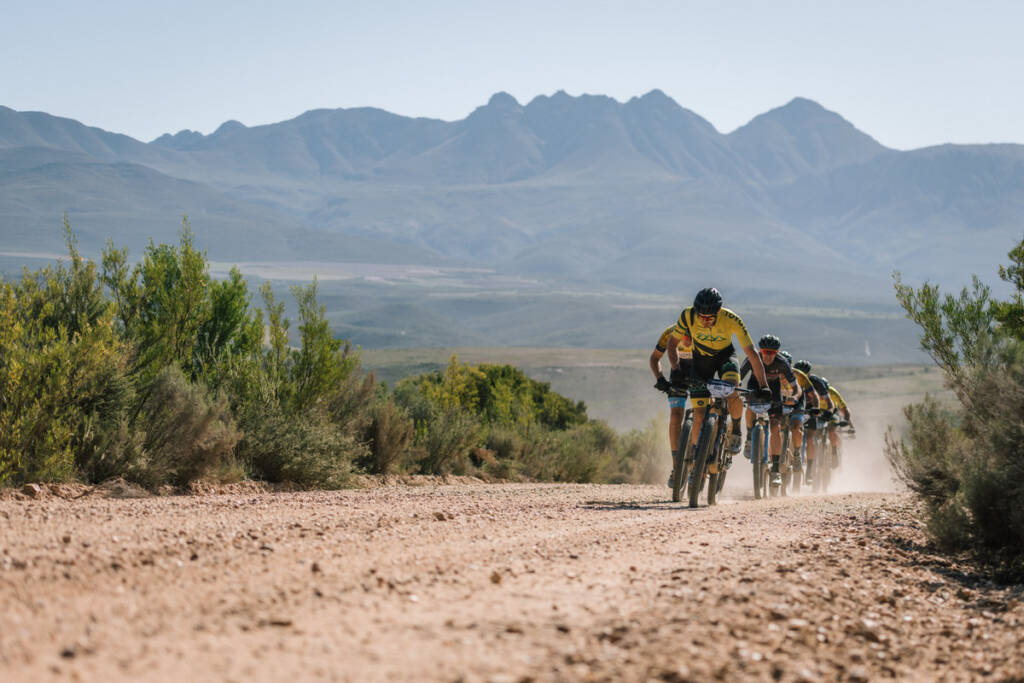 The top four general classification teams were unable to shake each other throughout Stage 3, meaning the day came down to a sprint finish. Photo by Justin Reinecke for zcmc.co.za.

“I think it’s been pretty clear the last few days that my system hasn’t been firing on all cylinders,” Arno du Toit explained as to why they went out hard and were happy to set the tempo all day. “I actually wanted to ride on the front to get the mental mojo back. That said it was a relatively relaxed day at the sharp end, everyone took it a little easy, aside from a couple of attacks here and there to test the legs. I think we all appreciated the easier day with two big days coming up tomorrow and on Friday.”

The Insect Science Pro rider opened up the sprint early, but with his teammate, Bontekoning, unable to match his effort Imbuko {type}DEV A had a relatively easy run at the line. They managed to cross the line behind Arno du Toit but well ahead of Bontekoning, extending their general classification lead in the process. Marco Joubert and Pieter du Toit now lead Insect Science Pro by 3 minutes and 51 seconds. Imbuko {type}DEV B’s Wessel Botha and Rudi Koen remain third. 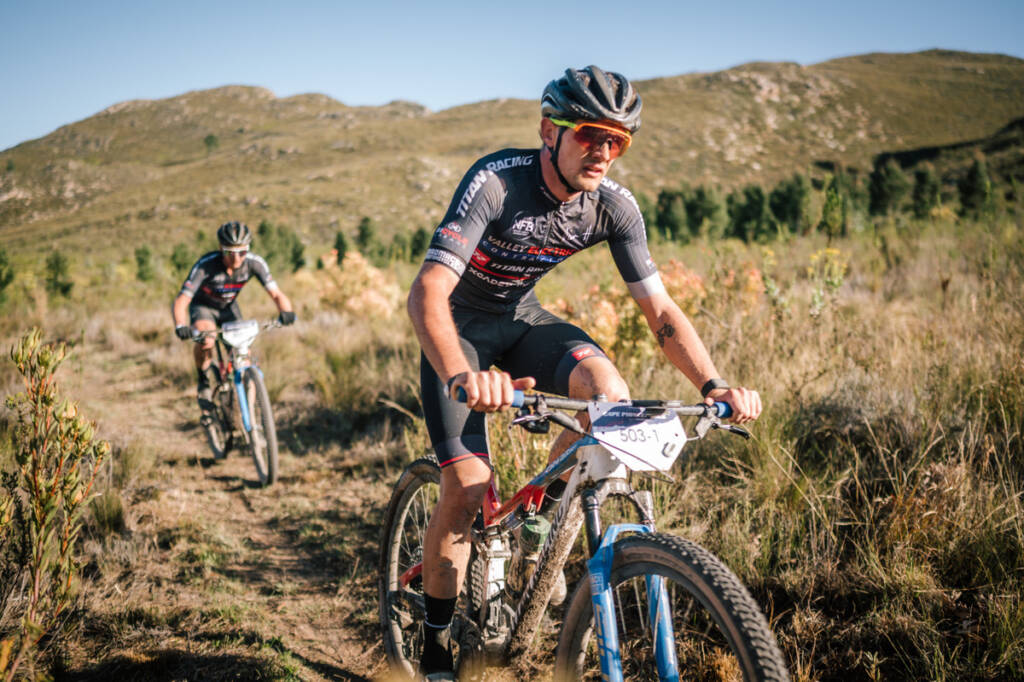 Where the men had enjoyed a relatively drama free day the women’s race was a different matter entirely. Having climbed strongly in the early phases Stephanie Wohlters and Yolande de Villiers were able to keep pressure on Theresa Ralph and Kim le Court. “We had them in sight for most of the day and then caught them on the district roads leading to water point 2” Wohlters said. “I was just getting set for a sprint and then a stick got caught in my derailleur,” De Villiers picked up the tale. “I had to stop to get it out and we lost the group with the Efficient Insure Infiniti women in it.”

With the stage win all but sewn up Ralph snapped her chain on the entrance to the final singletrack. “I thought we were a lot closer to the finish,” Ralph explained. “But it felt like we had to run 5 kilometres! The singletracks were too narrow for Kim [le Court] to push me; so, I ran, then Kim gave me her bike and she ran. On the last climb up to the finish Yolande [de Villiers] and Steph [Wohlters] caught us. Fortunately, we only lost a handful of seconds.” 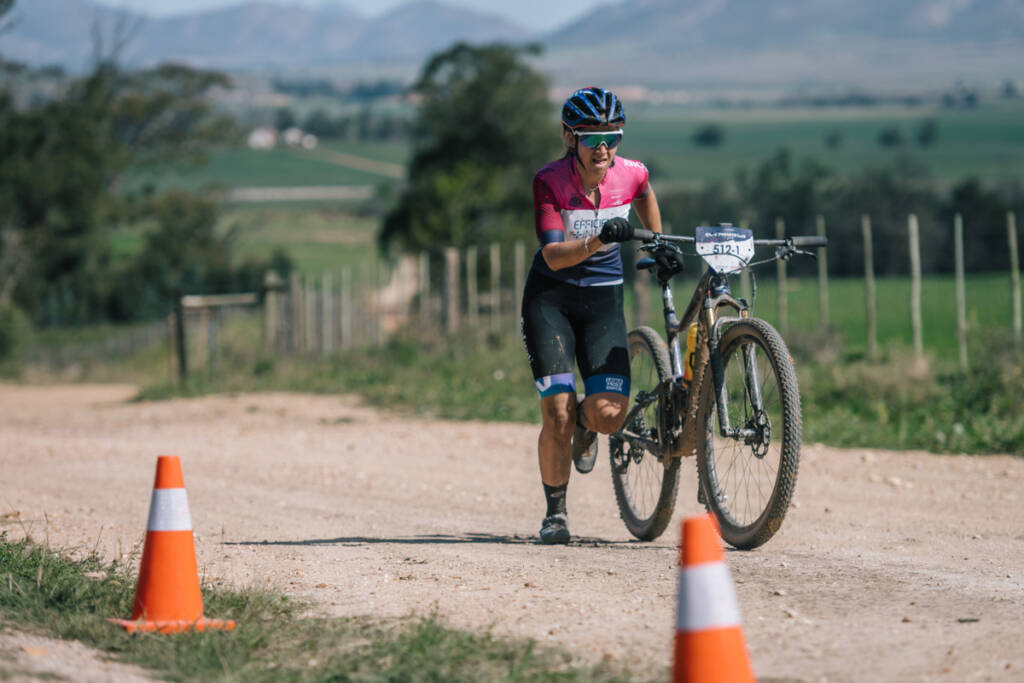 Kim le Court swapped bikes with Theresa Ralph and ran her partner’s bike in to the finish to limit their time losses after Ralph’s chain snapped. Photo by Justin Reinecke for zcmc.co.za.

Having made the turn into the finishing straight the Efficient Insure Infiniti team were able to freewheel across the line. They may have conceded the stage to Madmacs/Coopetto/Bester Performance but their time loss was negligible. As a result, they now lead the overall standings by 16 minutes and 24 seconds. Clickatell’s Ila Stow and Robyn Williams are in third overall, with a comfortable 23 minute advantage on Echotel Communications’ Tarryn Povey and Kylie Hanekom.

Thursday’s Stage 4 takes the race from the Langkloof to Oudtshoorn, in the heart of the Klein Karoo, via the fabled Kammanassie Mountains. The 92 kilometre long route includes 1 650 metres of climbing. It will undoubtedly be a difficult day, especially for those who went too deep on the previous stages. To follow the action as it unfolds like the Momentum Medical Scheme Cape Pioneer Trek, presented by Biogen, Facebook page, follow @CapePioneerTrek on Twitter and follow @capepioneer on Instagram. For more information visit www.capepioneer.co.za. 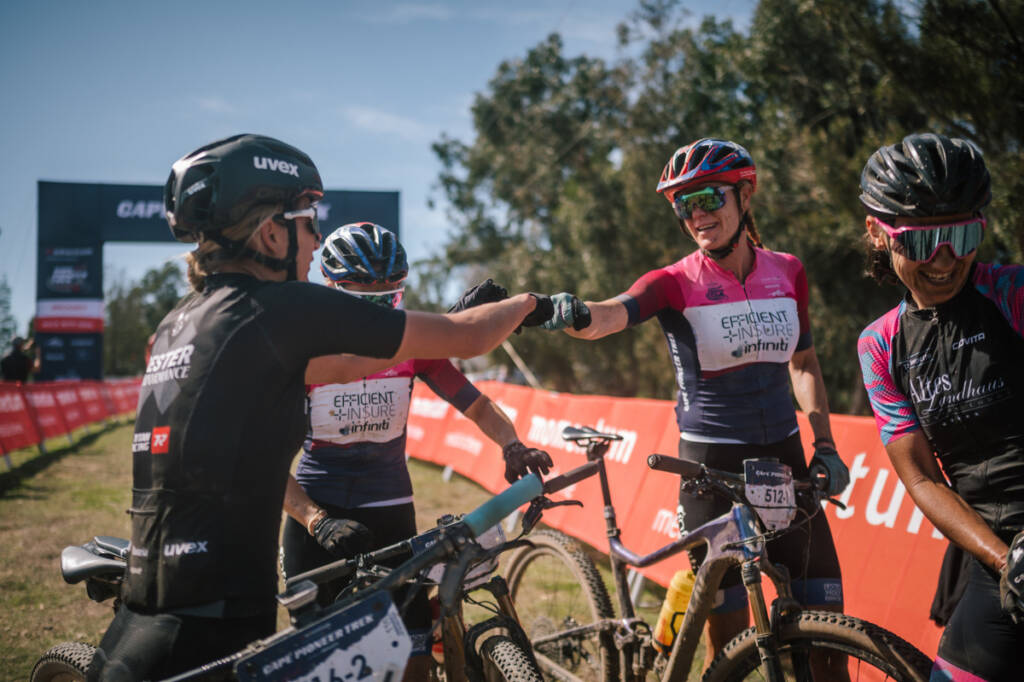 The top two women’s teams congratulate each other and swap the stories of how their days nearly deteriorated into chaos. Photo by Justin Reinecke for zcmc.co.za. 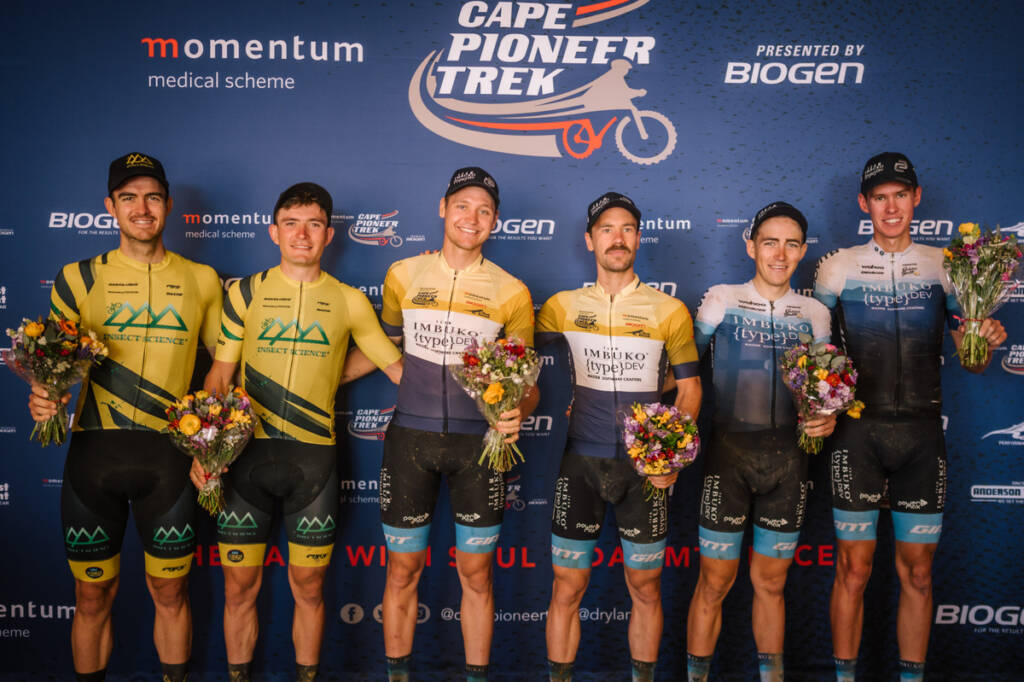 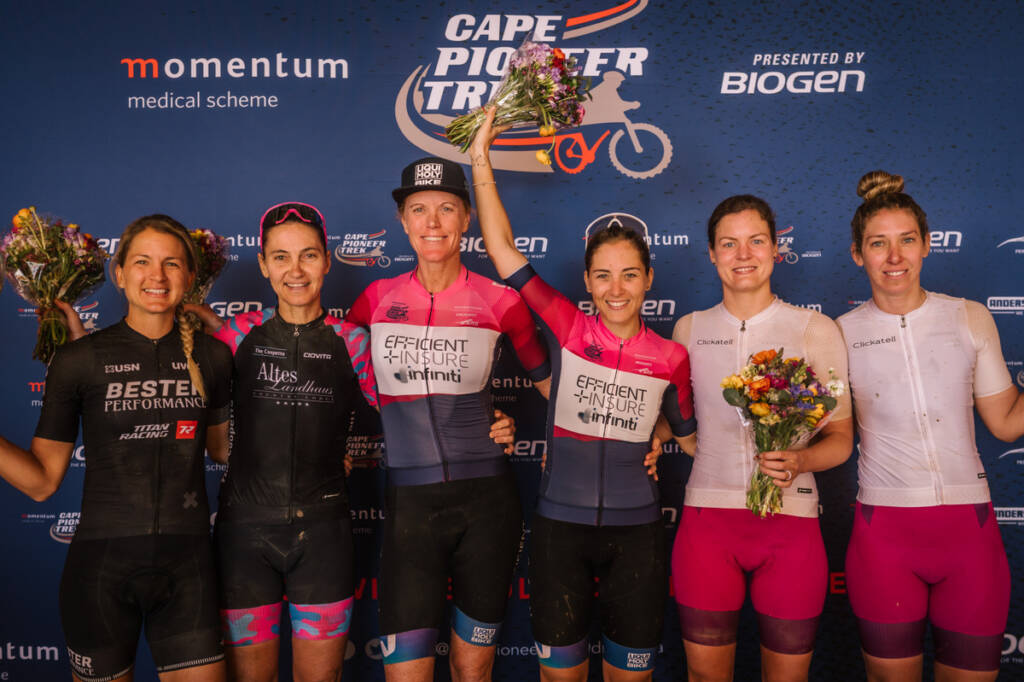 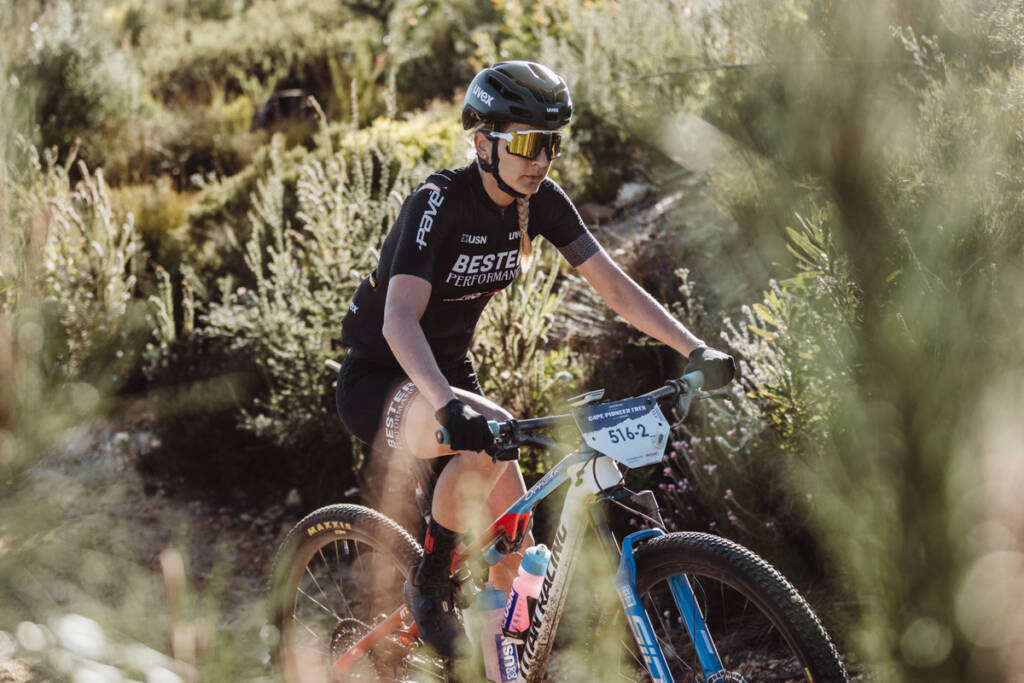 Stephanie Wohlters had a strong ride through Stage 3, helping Yolande de Villiers to victory. Photo by Erin Nel for zcmc.co.za. 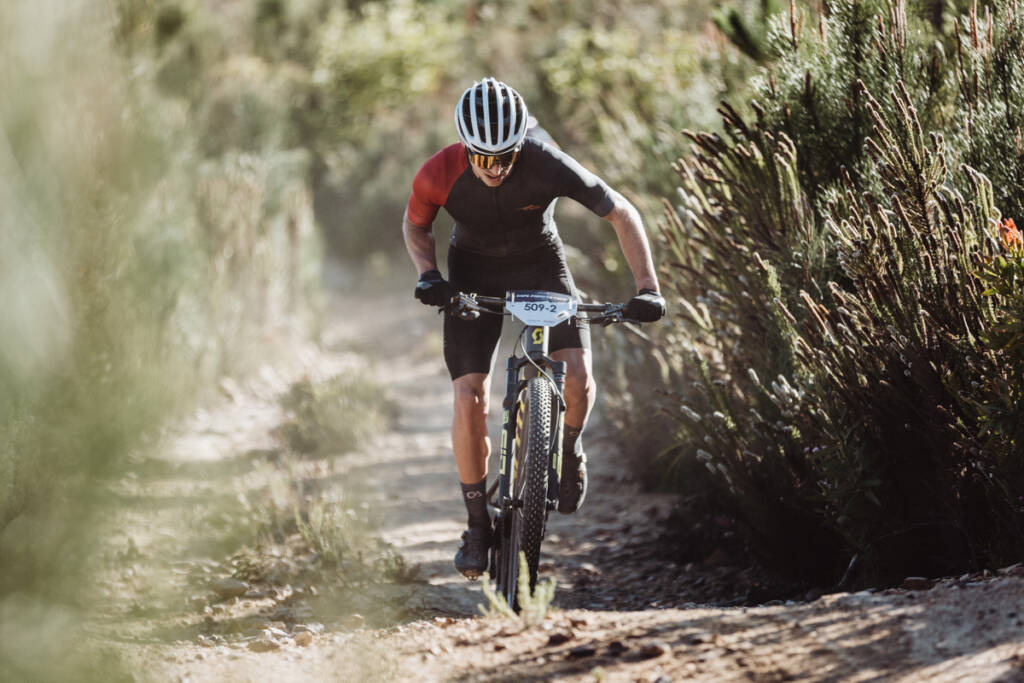 First Ascent’s Nicol Carstens is riding solo; after his partner, Jaco Venter, crashed out on Stage 1. Photo by Erin Nel for zcmc.co.za. 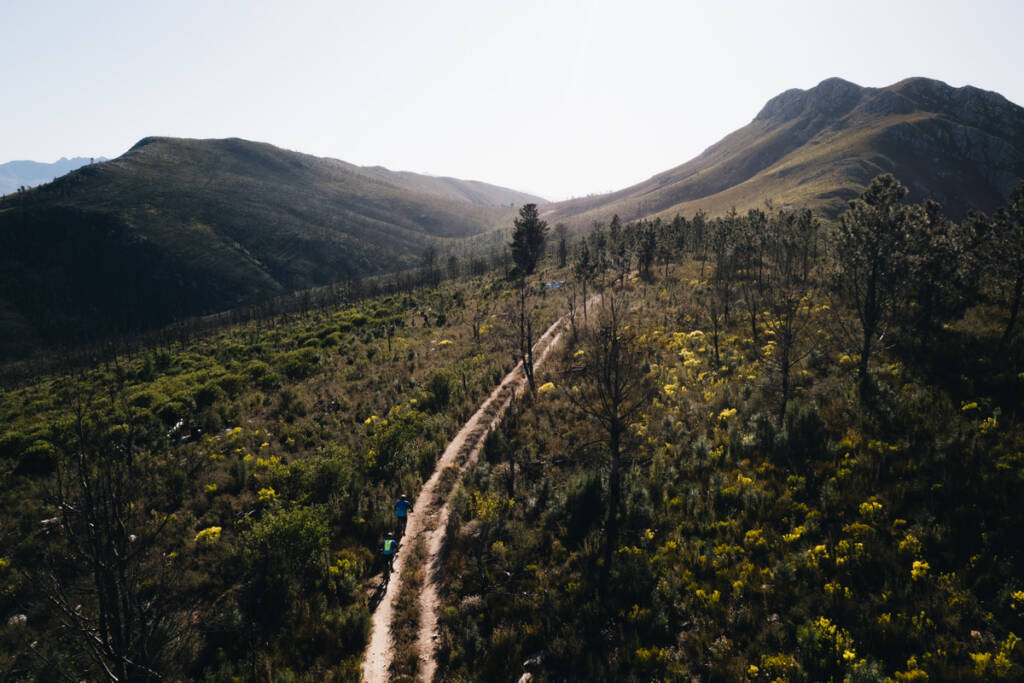 Stage 3 took the riders into remote regions; some never before ridden by mountain bikes, let alone used in a mountain bike race. Photo by Erin Nel for zcmc.co.za.