Imbuko {type}DEV B have been instrumental to the A team’s success thus far at the 2022 Momentum Medical Scheme Cape Pioneer Trek, presented by Biogen. On Thursday, 8 September, Stage 4 from Louvain to Oudtshoorn Wessel Botha and Rudi Koen received their just rewards with a historic stage victory. The win is Botha’s first at the Race With Soul and Koen’s first in a major South African mountain bike event.

The 92 kilometre stage, which featured 1 650 metres of climbing flirted with the Kammanassie Mountains. It did however not venture into the wild depths of the range, but remained on the fringes. Even that was enough to provide punctures aplenty however, and ensure a tough start to the stage with a loose and rocky climb from the off. 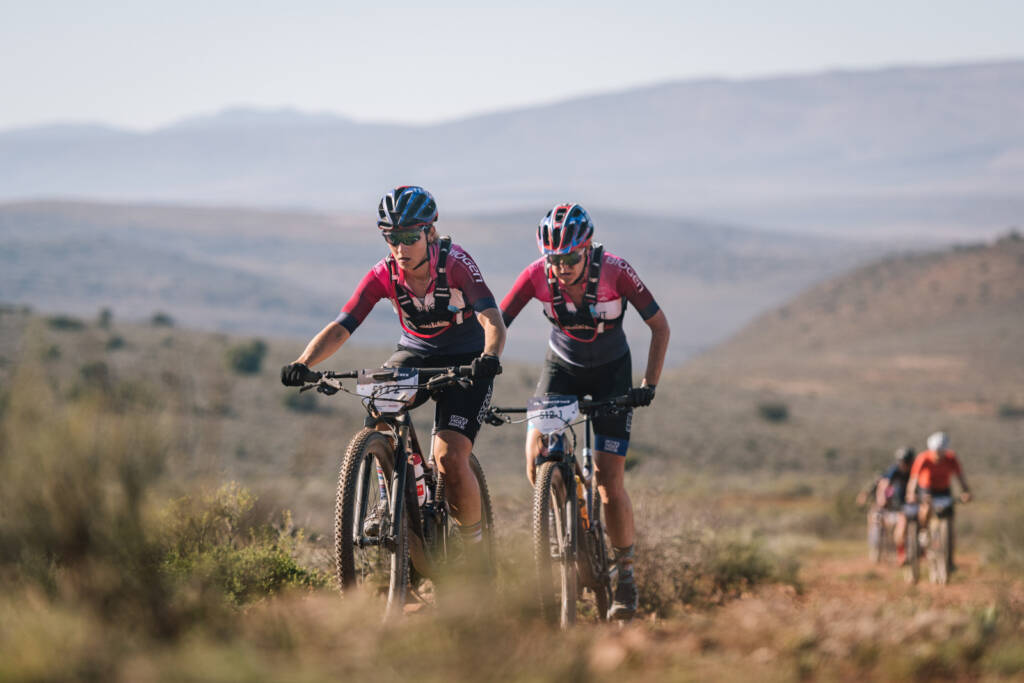 “My legs take an hour to warm up, so that first climb wasn’t ideal,” Theresa Ralph recalled, having wrapped up a third stage win for the Efficient Insure Infiniti Racing team alongside Kim le Court. “It was steep and rocky. Yolande [de Villiers] and Stephanie [Wohlters] were right there with us for that climb, which made the racing really exciting. Once we got out of the technical terrain onto the jeep tracks and later on the district roads we were able to open up a nice lead again.” 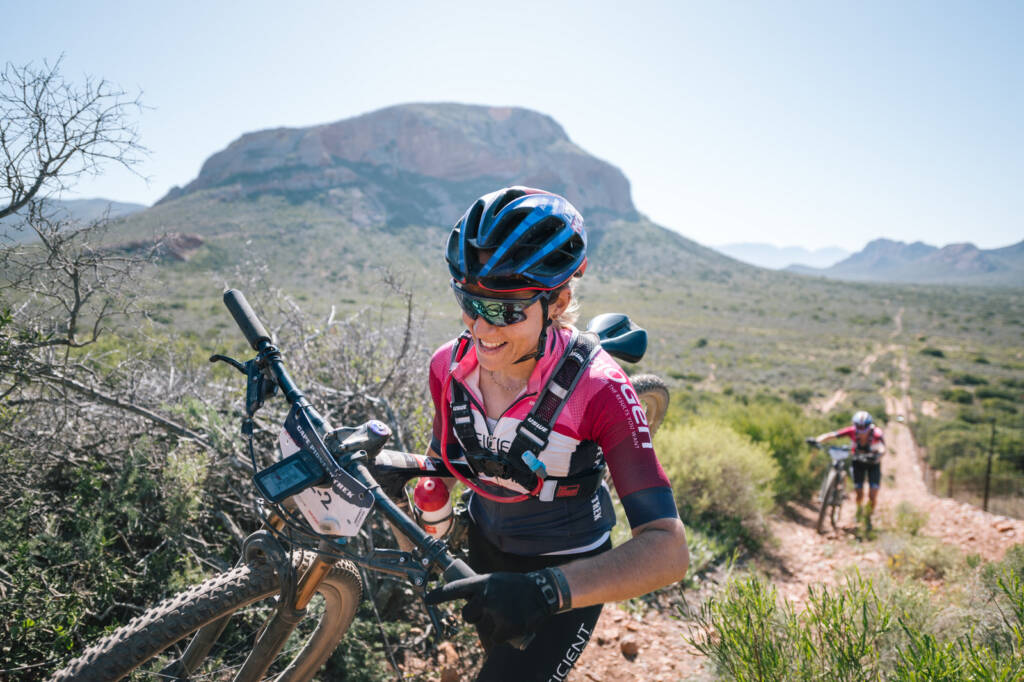 Even a technical climb, which forced every rider in the field off their bike, could not prevent the Efficient Insure Infiniti Racing team from claiming another stage win. Photo by Sage Lee Voges for zcmc.co.za.

In the men’s race the technical, opening, climb split the top teams from the rest of the field within the first 5 kilometres. Initially Valley Electrical Titan Racing were able to follow the usual suspects group of Insect Science Pro and the two Imbuko {type}DEV teams. The descent from the summit of that climb put pay to any hopes Matthew Keyser and HB Kruger may have been harbouring of contesting for the stage victory on the day however. Once again Kruger punctured. The snake bite flat required a wheel change at the first water point, at the 29 kilometre mark, and relegated Keyser and Kruger into the second group on the road.

With the three strongest teams in the race it was clear that the front and chase groups would never merge. What was not clear though was that Botha and Koen would be able to contest for the stage victory. “I had a moment, between the two water points,” Koen confessed. “But Wessel [Botha] waited for me and paced me back on the rolling roads.” 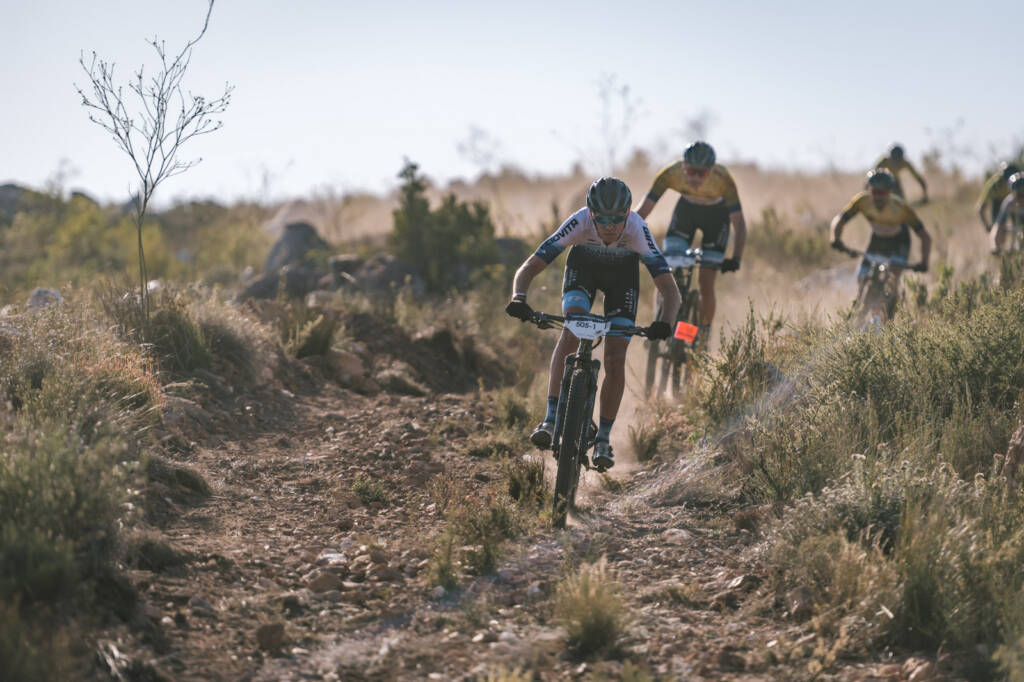 The technical first descent provided no concerns for the Imbuko {type}DEV teams and Insect Science Pro. Photo by Justin Reinecke for zcmc.co.za.

Imbuko {type}DEV B re-joining the group of Marco Joubert, Pieter du Toit, Arno du Toit and Keagan Bontekoning did not result in a lull in the action. Each of the teams tried in turn to shake the others, but with the added fire power of two squads Imbuko {type}DEV always had the upper hand. This meant that for the second day in a row the Momentum Medical Scheme Cape Pioneer Trek, presented by Biogen came down to a sprint.

“About 2 kilometres from the line I felt my front tyre starting to squirm under me when I got out of the saddle,” Arno du Toit explained. “So, I had to stay seated, try to navigate the sweeping bends of the run in as well as I could and limit my losses.” “I’m so excited for Rudi [Koen],” Joubert grinned having finished second. “It’s his first big win and after just coming back from 9 months out with a broken leg it’s amazing for him.” 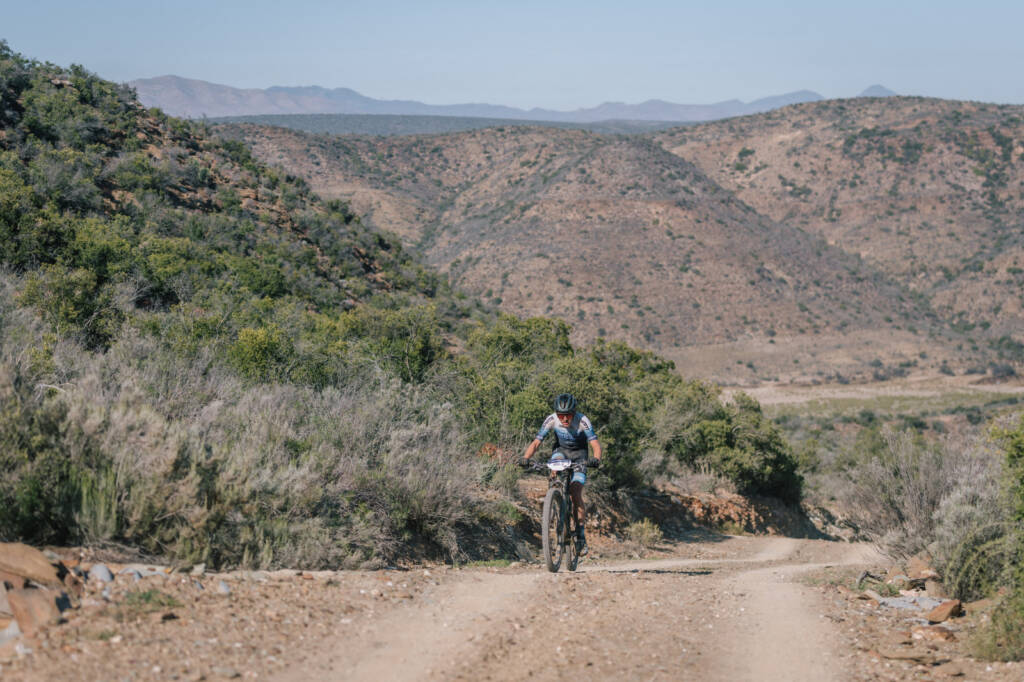 Rudi Koen recovered from a difficult spell in the mid phases of the race to ride to stage victory alongside his Imbuko {type}DEV B teammate. Photo by Justin Reinecke for zcmc.co.za.

For his part Koen was quietly enthusiastic: “Wessel really helped me today. Then in the finale we were able to put in a little attack and get into the school grounds first. Keagan [Bontekoning] snuck past us just before we turned onto the fields, but in a team’s race it’s the first team over the line who wins it. I’m really happy to have been able to take the win today.”

The stage result saw Insect Science Pro give up 8 seconds to the yellow First Ascent jersey wearing Imbuko {type}DEV A. Joubert and Pieter du Toit lead Arno du Toit and Bontekoning by 3 minutes and 58 seconds. Imbuko {type}DEV B are third, Valley Electrical Titan Racing fourth and KMC fifth. Only just over 2 minutes separates the Varsity College team of Erick Heyns and Jaedon Terlouw from Teus Ruijter and Gerben Mos in fifth. The battle between the South African youngsters and the Dutch team has been fierce all race and could come to a head on the Swartberg Pass. 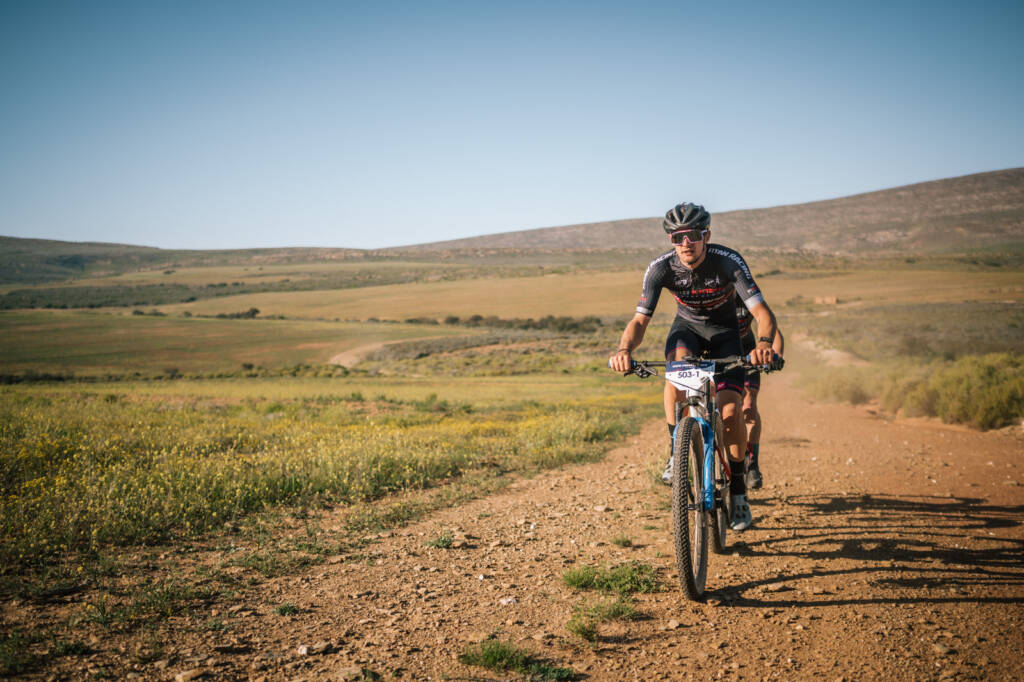 Valley Electrical Titan Racing suffered another puncture, which put them out of contention within the first 10 kilometres of the day. Photo by Justin Reinecke for zcmc.co.za.

The iconic climb is the main feature of the Queen Stage of the 2022 race. It includes a 750 metre elevation gain in the final 10 kilometres and is traditionally a definitive stage in the overall race. Measuring 84 kilometres in length and featuring 2 200 metres of climbing it provides the terrain for significant time gains or losses. To follow the action as it unfolds, on Stage 5, like the Momentum Medical Scheme Cape Pioneer Trek, presented by Biogen, Facebook page, follow @CapePioneerTrek on Twitter and follow @capepioneer on Instagram. For more information visit www.capepioneer.co.za. 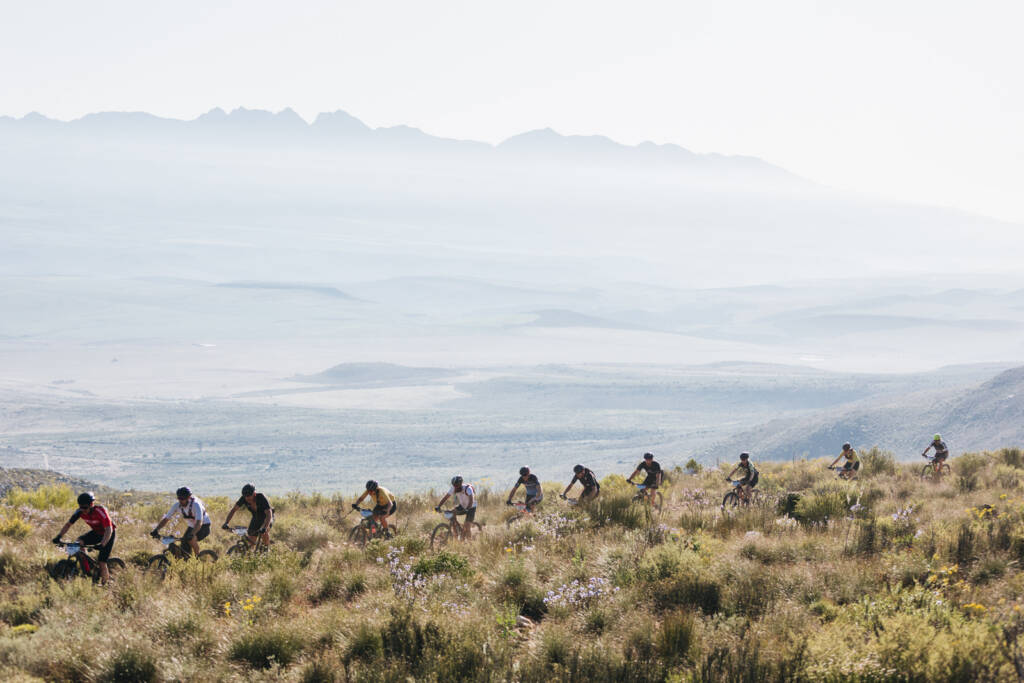 Racing across a high ridgeline the riders were treated to views across the Kammanassie river basin towards the Swartberg Mountains and Stage 6’s final challenge. Photo by Erin Nel for zcmc.co.za. 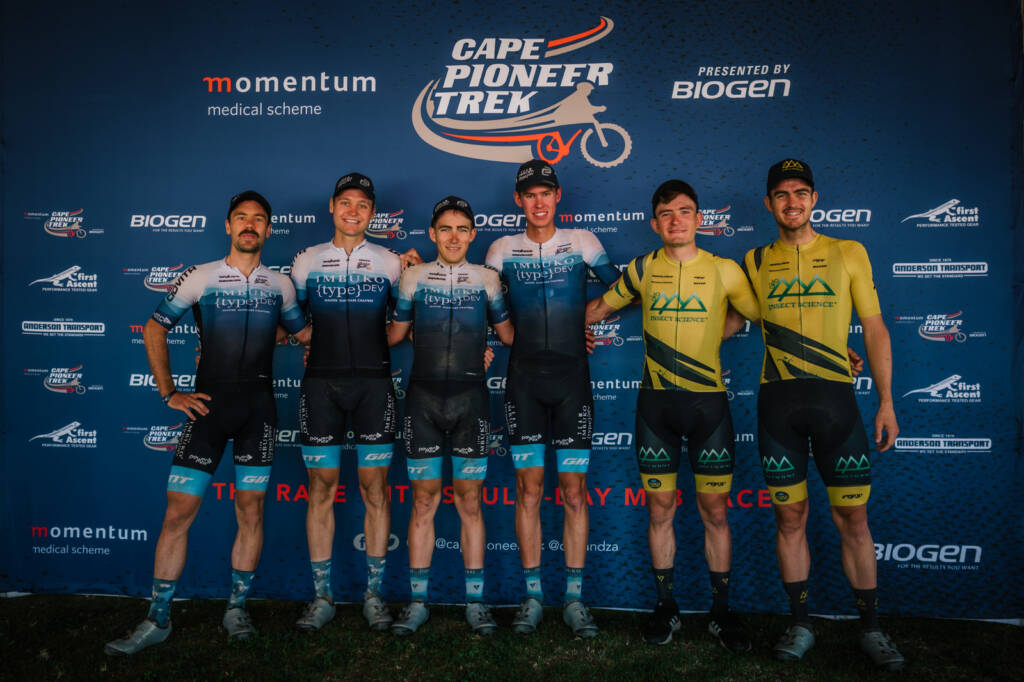 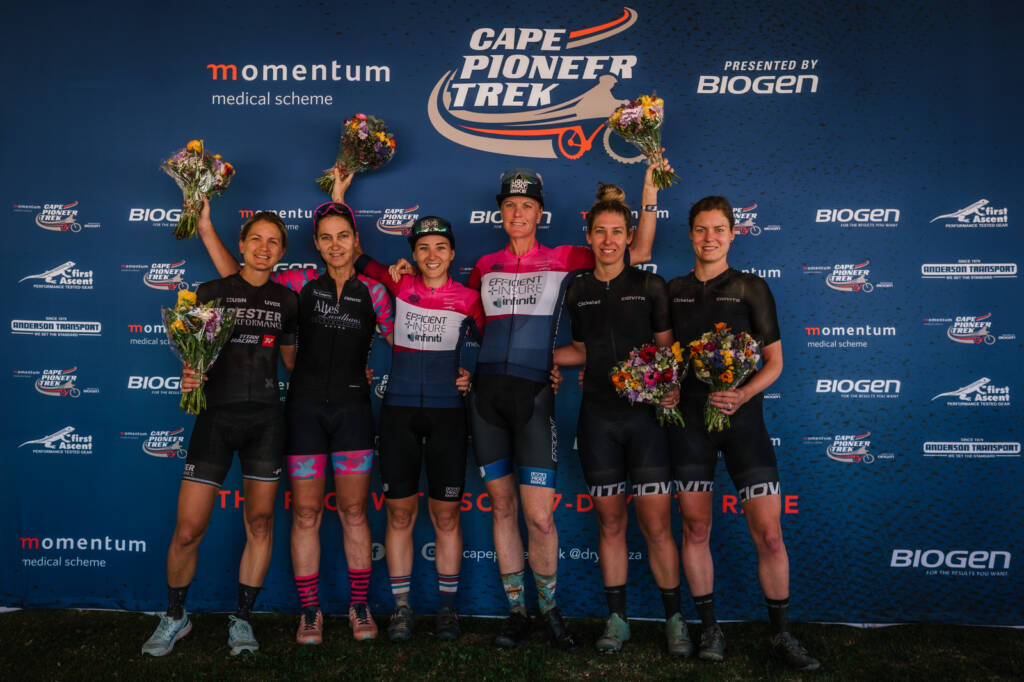 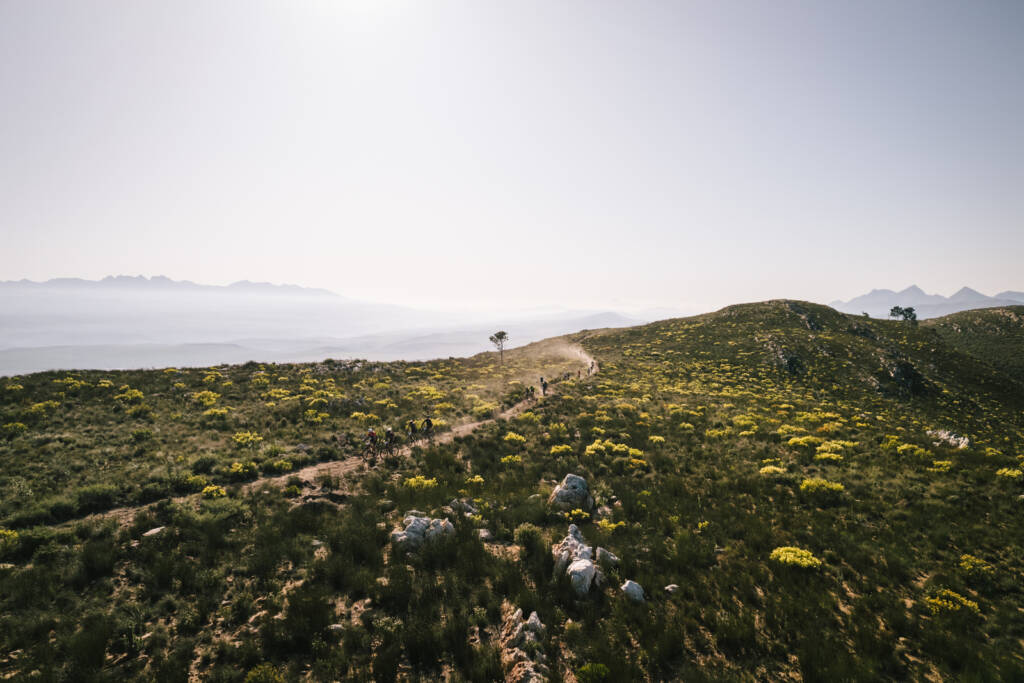 The scenic early phases of the route provided spectacular vistas for those with the time or energy to appreciate them. Photo by Erin Nel for zcmc.co.za.