Kelton Miller won the men’s race at the inaugural Stanford 100 Miler gravel bike race in Stanford, near Hermanus on the 10th of December, crossing the line seven minutes ahead of David George in a time of 05:57:09. In the women’s race, Tyla Setzkorn claimed top spot ahead of Mandy Collis with a race time of 07:26:31.

The results don’t really matter though, because the Stanford 100 Miler issue one, was more than a race. It was a celebration of gravel cycling, gravel bikes and the gravel culture that produces challenging routes and warm post-race bonhomie among its devotees.

In that vein, the full range of gravel enthusiasts was on display this past Saturday at Stanford Hills Wine Estate in the Western Cape, where the event started and finished. 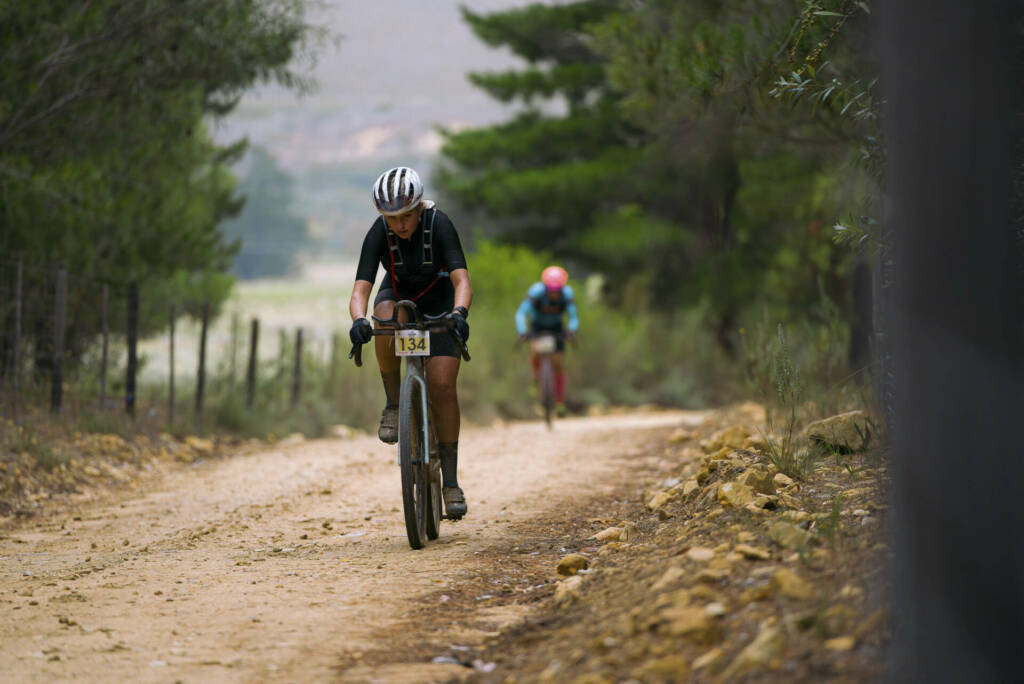 Tyla Setzkorn on her way to victory in the women’s race at the inaugural Stanford 100 Miler.

From the Wacky Races cohort, mullets and lambchop sideburns were the 70s-chic look; from the slick city riders, coordinated kit of muted olive tones ruled the day; and of course, at gravel races, there is always one rider tackling the event on a piece of outlier machinery, something so fine and rare that only the most dialled-in gravelista could have tracked it down.

In this instance, it was a rider on former Namibian pro rider Dan Craven’s Onguza brand turning heads. In Craven’s words, Onguza is a “world-class steel-framed bike built on a dusty farm in Namibia”. If that doesn’t scream “gravel aficionado” then nothing will.

Make no mistake, though. The Stanford 100 Miler was no end-of-year wind-down, not that anyone entering a 160km race would be under such an illusion. Weather conditions were cool, windy and wet, with the rain coming and going throughout the morning and into the early afternoon. For the first 100km, riders battled a gusty headwind which turned into a tailwind with 60km to go. 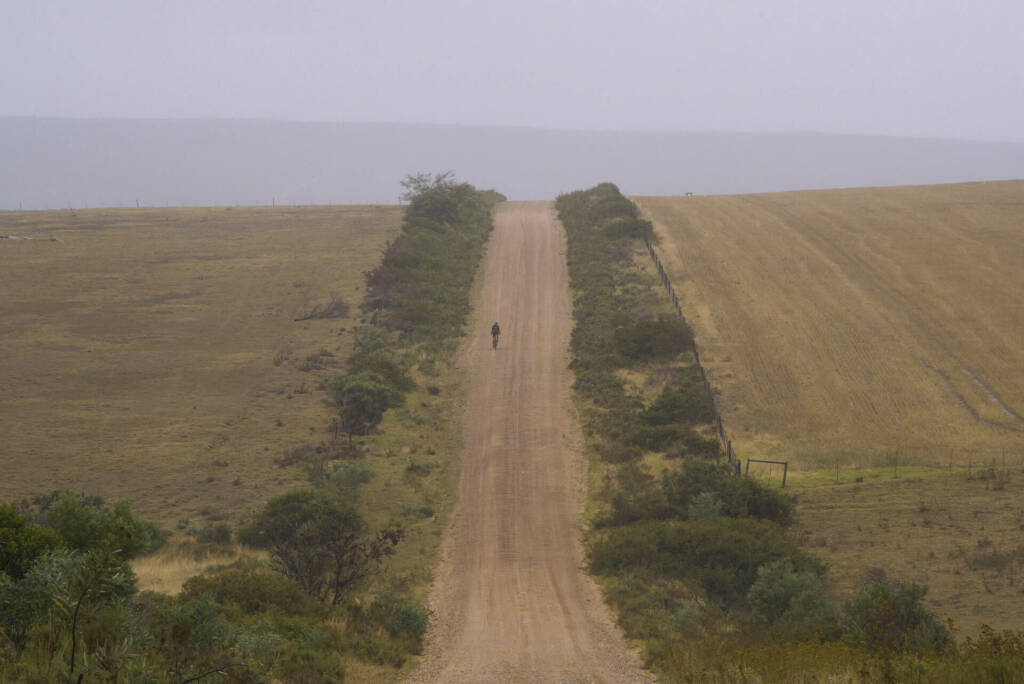 The route was deceptively hilly and the weather ensured a tougher day out than expected, for early December.

There was much head-shaking and relief from shattered riders as they crossed the line, with former Tour de France rider David George even turning down his finish-line beer to first gather his senses after a tough day out. All were in agreement, though, that the route and the race setting were worth the effort.

Two riders, Aphinda Afrika and Vuyisa Mfinci, took wrong turns, taking their total ride distance to 185km, but they still finished with smiles, happy to have completed the challenge.

Men’s winner Kelton Miller said, “It was wet, windy and muddy. But it was an awesome day out. It was fun. It was a great way to start the festive season. The route was fantastic and I had a great time out there.”

Tyla Setzkorn called the experience “amazing”. She added, “That is what gravel should be – everything thrown into the mix, some technical stuff, like rocks, ruts, and smooth gravel. I’m from Hermanus so I trained on the route. It was a lot of fun but still a hard day out on the bike.” 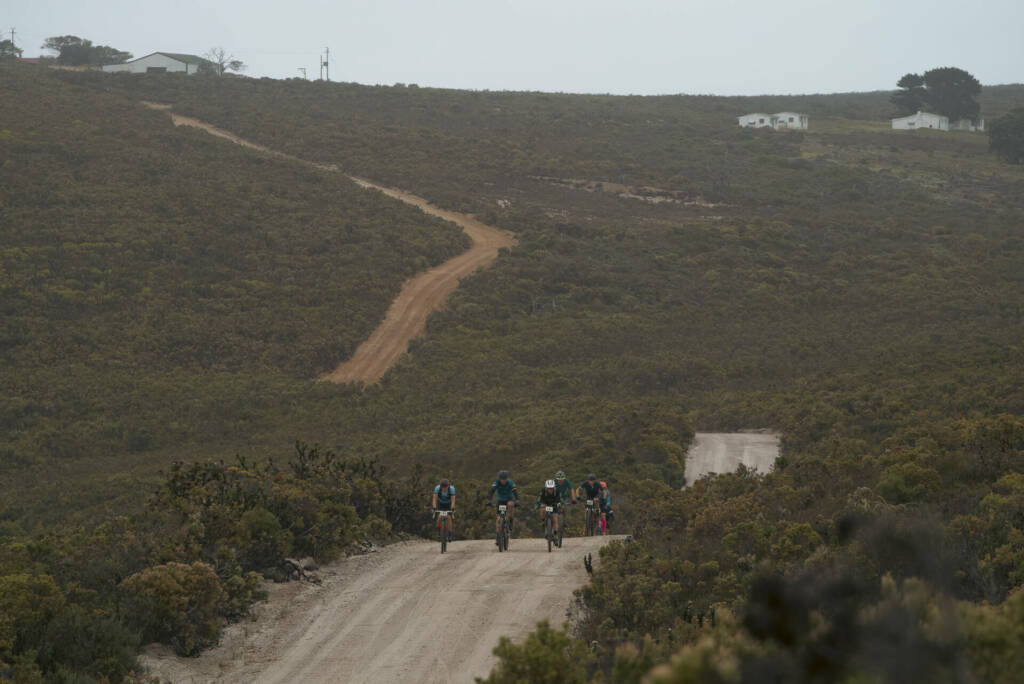 The gravel roads of the Elim and Stanford region are ideal for gravel bike racing.

For their efforts, Miller and Setzkorn each took home the floating trophy – a well-polished bugle (that neither of them could get a tune out of). They have one year to learn a note and then hand the trophy back to the organisers.

The rest of the field was rewarded for their efforts with a hot pork pie – made fresh in the hamlet of Wolvengat that riders had passed through earlier in the day – and a pint of lager.

Most riders never got a chance to eat their pies, thanks to the efforts of Sherlock the Beagle, who swiftly swooped in to pilfer any pie that was laid down on the ground by a weary finisher. C’est la gravel vie. 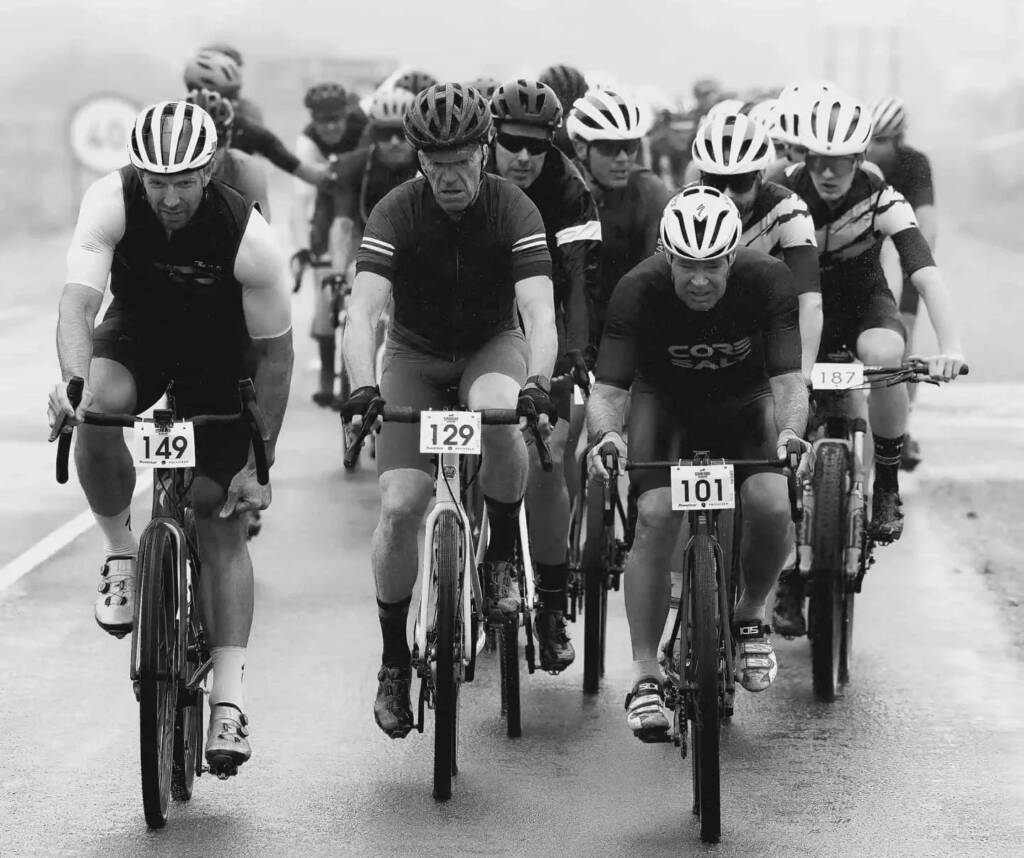 The leading pack, early on, forging their way towards Elim.