The 2018 Absa Cape Epic got underway in the best possible way for Investec-songo-Specialized’s Annika Langvad and Kate Courtney on Sunday the 18th of March at the University of Cape Town. The four other songo teams all made it through the potentially tricky Prologue without incident and are poised to challenge for their own goals as the race progresses.

The elite men’s team of Jaroslav Kulhavý and Howard Grotts in particular were happy with their performance on the 20 kilometre long course on the slopes of Table Mountain. The two time champion had been ill with a stomach bug in the week leading up to the Cape Epic so he and Grotts were presently surprised that they were able to top the time sheets to the first check-point at 8.5 kilometres; before throttling back on their efforts to finish in fifth on the stage in order to conserve energy for the long days to come. “I think this was the hardest stage for us; and then the rest of the stages will be where we can really work together and use our strengths. So being a minute back is not such a bad place. We’re still within striking distance” the American champion Grotts said.

The elite women’s combination of Langvad and Courtney topped the time sheets in the race for the women’s orange jerseys. “We had a strategy and executed it perfectly” Langvad revealed. “We went hard but it was controlled” Courtney added. When asked as to how they survived the build-up to the race which claimed four of her potential rivals, through illness or injury, Langvad responded: “That’s why experience is so important. I told Kate (Courtney) what she needed to do to be ready for the Epic but most importantly she had to be ready to start, to focus on being healthy and injury free.”

The pair lead Langvad’s ex-teammate Ariane Lüthi, and her Team Spur partner Githa Michiels, by 1 minute and 12 seconds and have a 2 minute and 14 second lead over third placed Sabine Spitz and Robyn de Groot. The songo.info programme teams of Sipho Madolo and Azukile Simayile (TJ songo-Specialized), Anrique Davids and Ntlantla Nonkasa (Investec Songo 1), and Lwazi Ntsakaza and Sikhusele Bhungane (Investec Songo 2) successfully completed the Prologue and like Kulhavý and Grotts are looking forward to the long hard stages in the Breede River Valley over the next few days. “Azu (Azukile Simayile) was very nervous. Far more nervous even than before his first Epic” Madolo confessed, after the pair had stopped the clock in a time of 57 minutes and 19 seconds. “But now the race has started and I’m sure his nerves will settle.” The pair are in 82nd position overall after the Prologue and more importantly currently outside of the top ten in the Absa African jersey competition, 9 minutes down on category leaders NAD Pro MTB’s Nico Bell and Matt Beers.

The Investec Songo teams of Davids and Nonkasa, and Ntsakaza and Bhungane are competing for the Exxaro category jersey against riders like the Change a Life Academy, Exxaro/PWC and the Diepsloot Mountain Bike Academy teams. The combination of Davids and Nonkasa were sixth in the category after the stage, 6 minutes and 55 seconds behind the stage winners Lucy Mlangeni and Tshepo Tlou of Exxaro/PWC 1. Ntsakaza and Bhungane were seventh on the stage a further 3 minutes back; but with only Ntsakaza having completed a Cape Epic before, the 2018 race is sure to be a learning curve for the four young riders. 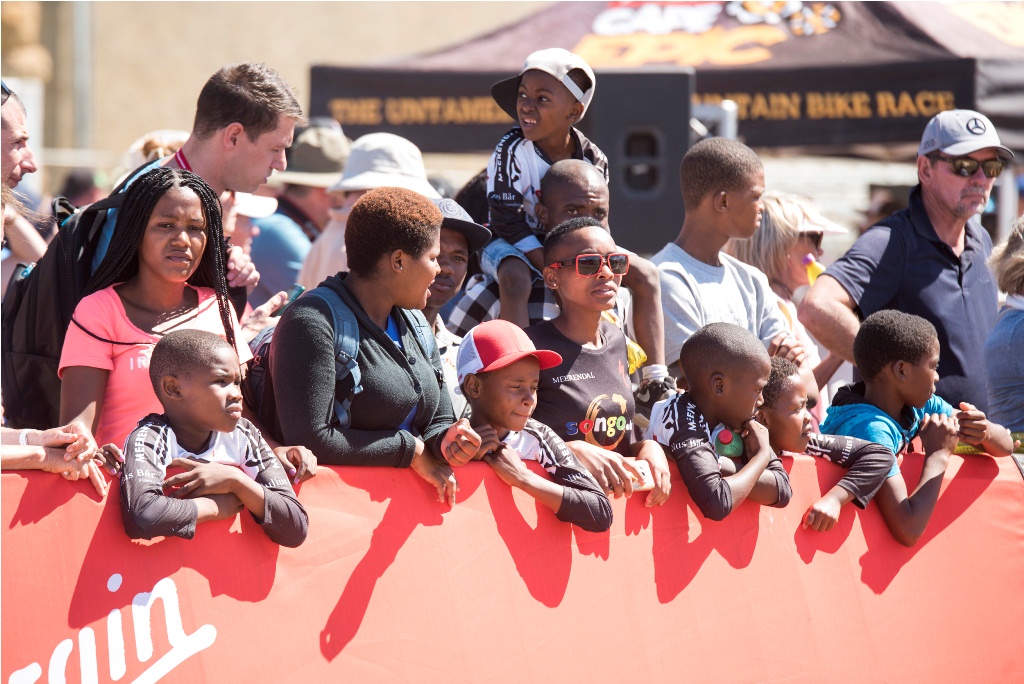 A number of children from the songo.info programme came through from Kayamandi to support their heroes as the 2018 Absa Cape Epic go underway. Photo by Andrew McFadden/Cape Epic/SPORTZPICS.

From the Prologue and the University of Cape Town the race village now transfers to Arabella Wine Estate outside Robertson. Stage 1, Monday the 19th, starts at 07:00 and features a demanding 110 kilometres long route, with 1 900 meters of accumulated elevation gain on the cards. To follow the teams’ progress throughout the stage and the race follow @songoinfo on Twitter or @songoinfo on Instagram, and like songo.info on Facebook. Visit www.cape-epic.com, to watch the live broadcast daily. 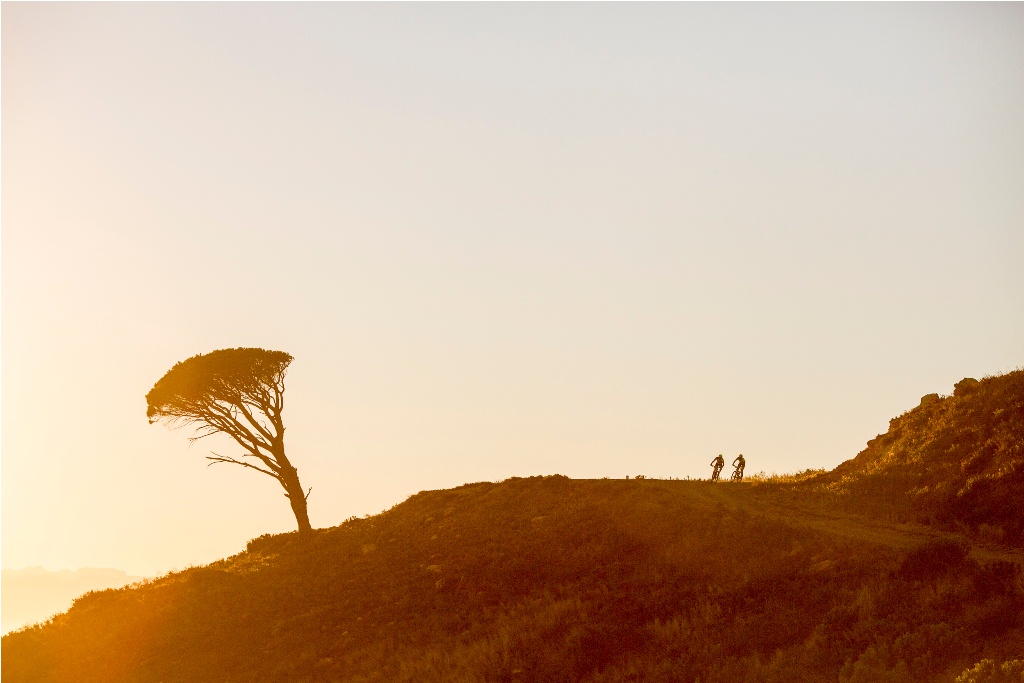 Riders and mountain biking fans alike were treated to a beautiful Cape Town morning for the start of the 2018 Absa Cape Epic. Photo by Sam Clark/Cape Epic/SPORTZPICS. 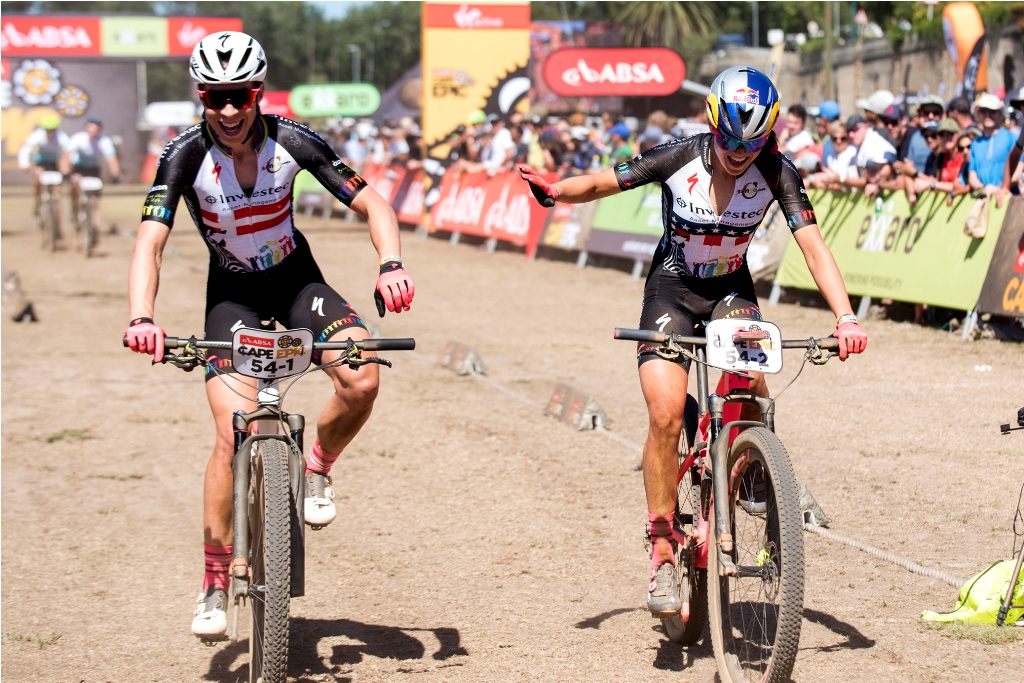 Annika Langvad and Kate Courtney cross the finish line in the fastest time of the day.
Photo by Andrew McFadden/Cape Epic/SPORTZPICS

For all the results from the 2018 Absa Cape Epic click here.