songo.info Men Move Into Yellow & Women Firm Their Grip On Orange At The Cape Epic

songo.info Men Move Into Yellow & Women Firm Their Grip On Orange At The Cape Epic

The Investec-songo-Specialized men pulled on the yellow leaders’ jerseys after Stage 3 of the 2018 Absa Cape Epic on Wednesday; while the women extended their general classification lead. Jaroslav Kulhavý, Howard Grotts, Annika Langvad and Kate Courtney all capitalised on a stage, from Arabella Wines to Worcester on the 21st of March, seemingly tailor made for the ‘Czech Express’ and the Danish powerhouse.

The 122 kilometre long stage took in 1 800 meters of climbing, most of which came in two long climbs – Pieter’s Express and Penn Hill. The rolling roads and jeep tracks which made up the majority of the route were perfectly suited to the powerful riding styles of Kulhavý and Langvad though; so it was no surprise when the Investec-songo-Specialized teams used the terrain to their advantage.

Kulhavý and Grotts had spoken pre-stage about biding their time and waiting for opportunities. The opportunity came far earlier than they had expected though. On the Pieter’s Express climb the pair set a blistering pace which strung out the main field and they crested the summit with Canyon Topeak’s Alban Lakata and Kristian Hynek. The Czech champion then put on a display of why he is known as the Czech Express and powered out a lead. Watching the stage unfold from the helicopter Neil Gardner, of the Absa Cape Epic, recounted: “Kulhavý must have done 70% of the work in the break. Lakata even said that had they come into the finish together he would not have felt right contesting the sprint with Kulhavý given the amount of work he did.”

As it turned out a couple of punctures for Grotts forced the Investec-songo-Specialized pair to chase back to eventual stage winners, Canyon Topeak; a feat which they only managed to accomplish the first time. Grotts’ second puncture was too close to the finish line to make up the minute gap, but the pair had done enough to turn their 2 minute and 23 second deficit to Cannondale Factory Racing, who finished third on the stage, into a 2 minute and 12 second advantage over the former race leaders. 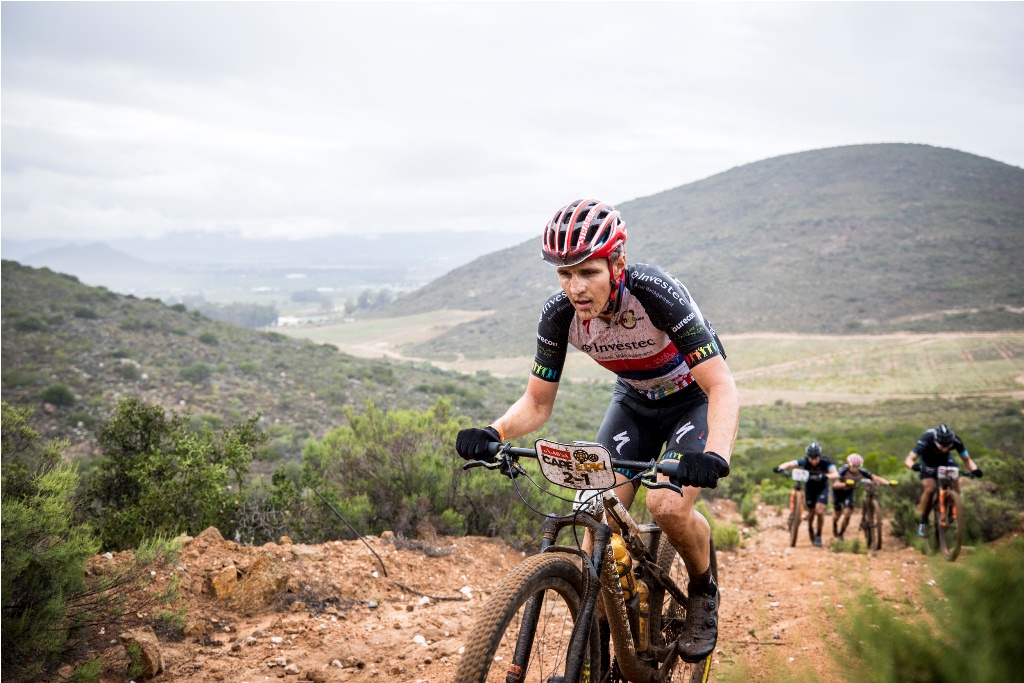 Jaroslav Kulhavý, according to the Absa Cape Epic’s Neil Gardener, spent 70% of the day leading the breakaway. Photo by Andrew McFadden/Cape Epic/SPORTZPICS.

Langvad and Courtney, with a lead of 6 minutes and 31 seconds heading into the stage, could afford to be more patient than Kulhavý and Grotts. The pair went through water point 3, at the 69 kilometre mark, in a group of three teams with Ascendis Health and Team Spur. After the water point, on the gradual climb towards the base of Penn Hill Langvad began to exert pressure on Sabine Spitz, Robyn de Groot, Ariane Lüthi and Githa Michiels. By the next water point, 92 kilometres into the stage, the Investec-songo-Specialized pair had established a lead of 1 minute and 3 seconds. In the final 30 kilometres the lead continued to grow as Langvad set the pace relentlessly, but even so their run in to the finish at HTS Drostdy was not without incident.

Inside the last 10 kilometres, on the banks of the Brandvlei Dam the pair began to catch slower male riders. Picking up the story Langvad recounted: “We were catching men and then on a sandy section of road near the dam a men’s team got stuck right in front of us. There was no time to react and we both went flying over the bars as we crashed into them. Fortunately it was a soft landing!” 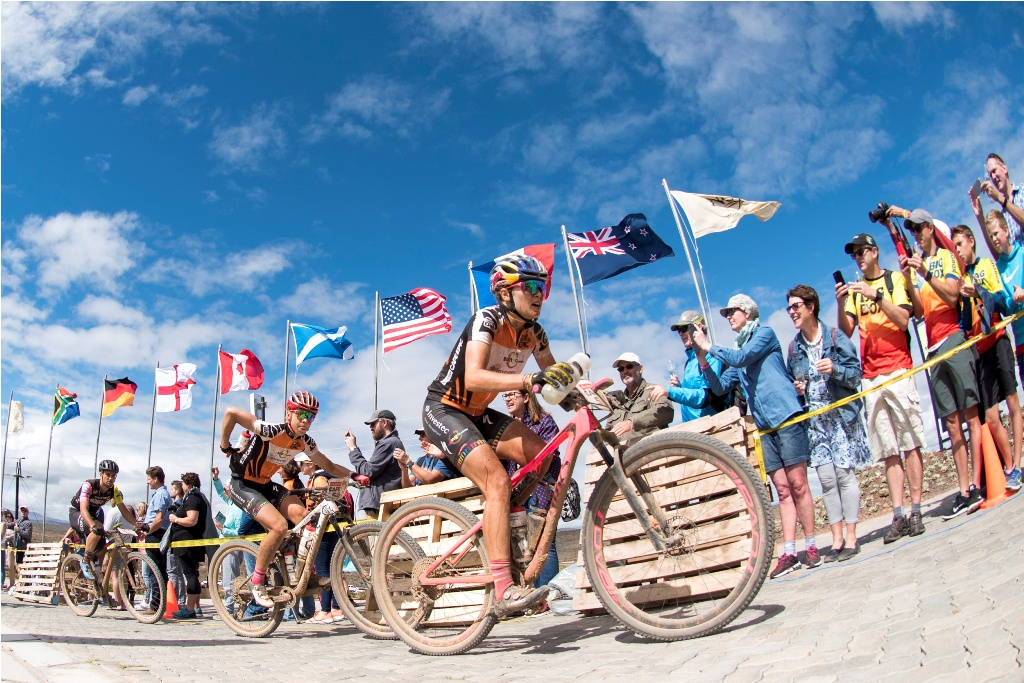 Kate Courtney leads Annika Langvad through the spectator zone at Nuy on the Hill, near Worcester, on their way to victory on Stage 3 of the 2018 Absa Cape Epic. Photo by Andrew McFadden/Cape Epic/SPORTZPICS.

Despite the falls Langvad and Courtney managed to extend their general classification lead by a further 5 minutes and 39 seconds over Team Spur. The result sees their grip on the orange women’s leader’s jerseys extend to 12 minutes and 10 seconds.

The songo.info teams all had comparatively good days, bettering their general classification positions. Sipho Madolo and Azukile Simayile, riding as TJ songo-Specialized, were still not entirely happy with their performance though. “We should really be finishing in 4 hours 40 something” Simayile reflected. On the back of their Stage 3 result the pair jumped into the top 100 on the general classification though, which is not to be discounted given the depth of the 2018 Cape Epic field.

Anrique Davids and Ntlantla Nonkasa were in high spirits after their 6 hour and 10 minute ride, despite running out of energy in the final 20 kilometres. “I think I got a little too excited and went a bit fast in the beginning” Davids said. “Then in the last 20 kilometres we started to struggle… but we’re finished now and that’s the longest stage done” the Worcester local concluded. 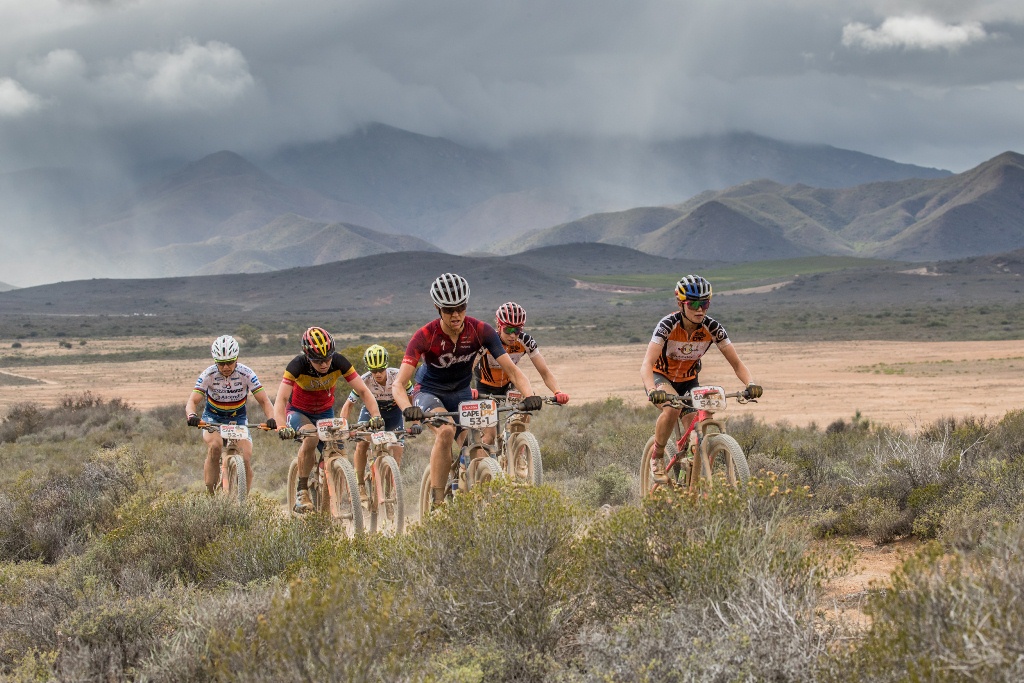 With a 6 and a half minute lead going into the longest stage of the race Annika Langvad and Kate Courtney could afford to bide their time before launching a stage winning attack in the final third of the stage. Photo by Greg Beadle/Cape Epic/SPORTZPICS.

The Investec Songo 2 team of Lwazi Ntsakaza and Sikhusele Bhungane had their best day of the race thus far and finished just 8 minutes behind their Investec Songo 1 teammates.

Stage 4 of the Absa Cape Epic features a 111 kilometre long route with 1 800 metres of climbing, most of which comes on the asphalt road up the Bainskloof Pass. The real challenge of the day lies before the pass however; the 40 kilometres through the Slanghoek Valley. The valley, though renowned for its beauty, is infamous the  mountain biking community for its sandy and rocky trails – avoiding punctures could be key to success on the day. 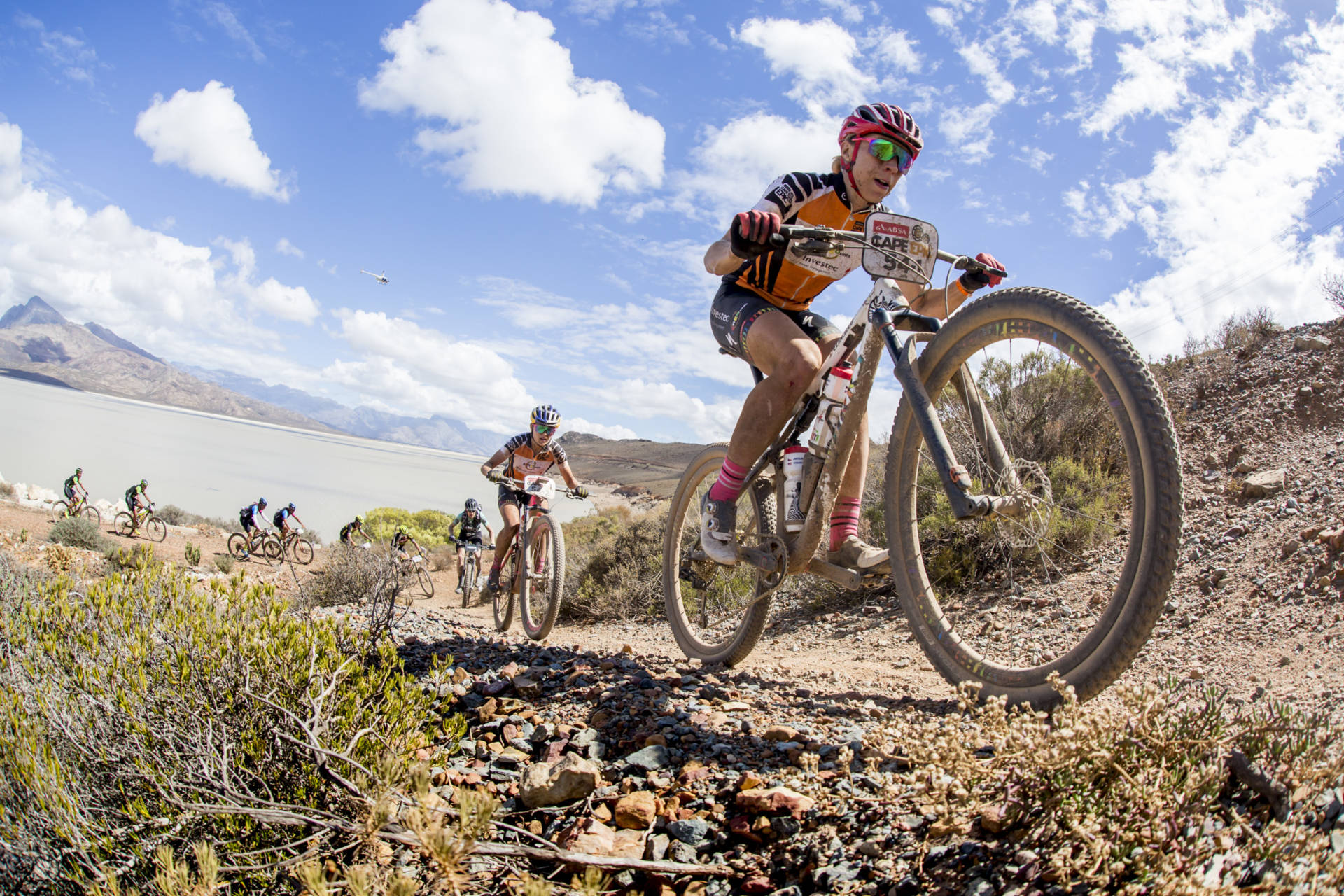 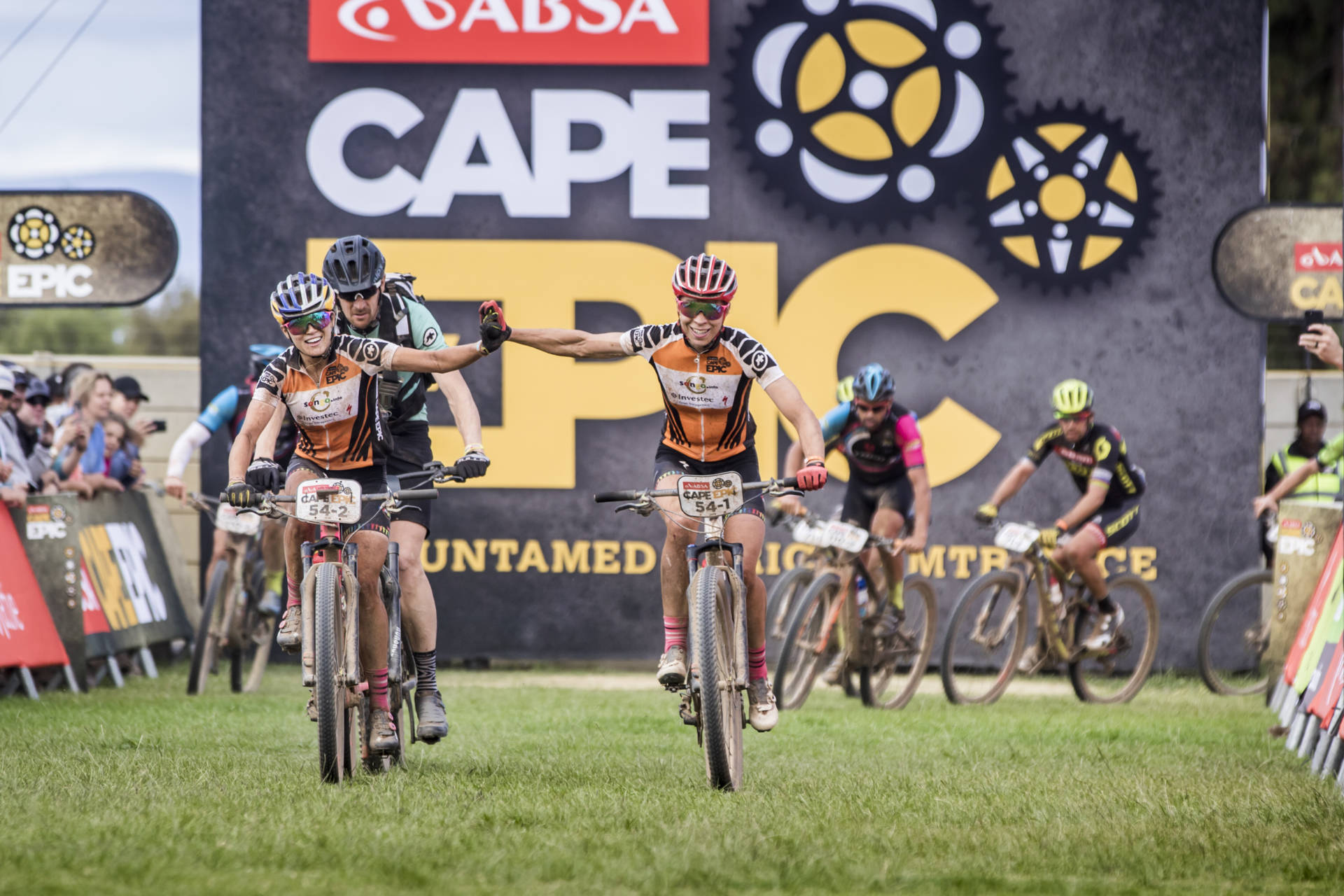 Annika Langvad & Kate Courtney cross the finish line for their forth successive stage win of the 2018 Absa Cape Epic at HTS Drostdy in Worcester. Photo by Ewald Sadie/Cape Epic/SPORTZPICS. 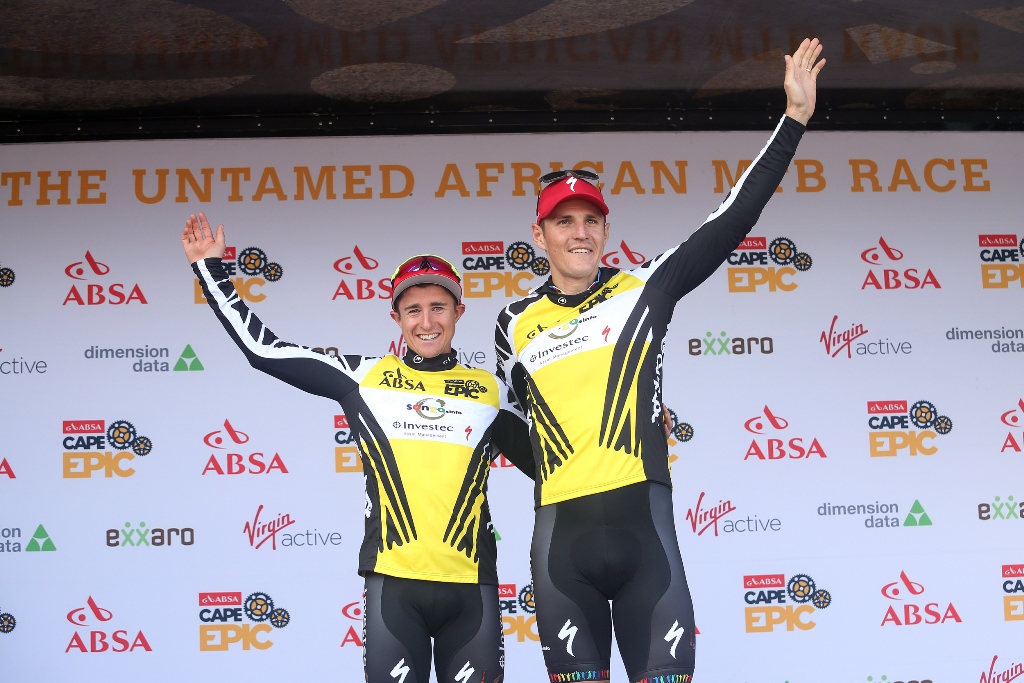