Birthday’s, Punctures & Counter Punches for songo.info at the Cape Epic

Birthday’s, Punctures & Counter Punches for songo.info at the Cape Epic

Investec-songo-Specialized’s Jaroslav Kulhavý and Howard Grotts punctured in the rocky Slanghoek Valley, but just when it looked like their general classification lead may be evaporating the pair counter punched – adding to their overnight lead by reeling in and overtaking Cannondale Factory Racing. In the women’s race Annika Langvad and Kate Courtney further extended their general classification lead, during Stage 4 of the 2018 Absa Cape Epic from Worcester to Wellington, on the 22nd of March – Langvad’s birthday.

The 113 kilometre long stage took in 1 800 metres of climbing; but while the elevation gain might not have made the stage appear, on paper, to be the most difficult of this year’s Cape Epic the route profile proved deceiving. The rocky and sandy trails through the Rawsonville and Slanghoek Valleys made the going exceptionally tough.

In the elite men’s race Cannondale Factory Racing’s Manuel Fumic and Henrique Avancini had earmarked the technical terrain in the first half of the stage as their opportunity to make up time on their rivals. The pair went on the offensive virtually from the off, setting a furious pace, but it took until the Goudini Spa singletrack climb to break away from of Kulhavý, Grotts and the rest of the main contenders. A puncture for Kulhavý in the Land Rover Technical Terrain, at the 60 kilometre mark, meant that the Investec-songo-Specialized pair was 2 minutes behind the stage leaders and at risk of losing their yellow jerseys.

Then the singletrack opened up into rolling jeep tracks and eventually turned to tar at the base of the Bainskloof Pass. Kulhavý put in another massive effort, reducing the deficit entirely by half way up the pass. In the process Kulhavy dragged the Bulls’ duo of Karl Platt and Urs Huber, the BUFF SCOTT combination of Francesc Guerra Carretero and Luis Leaso Pinto and Centurion Vaude’s Nicola Rohrbach and Daniel Geismayr. 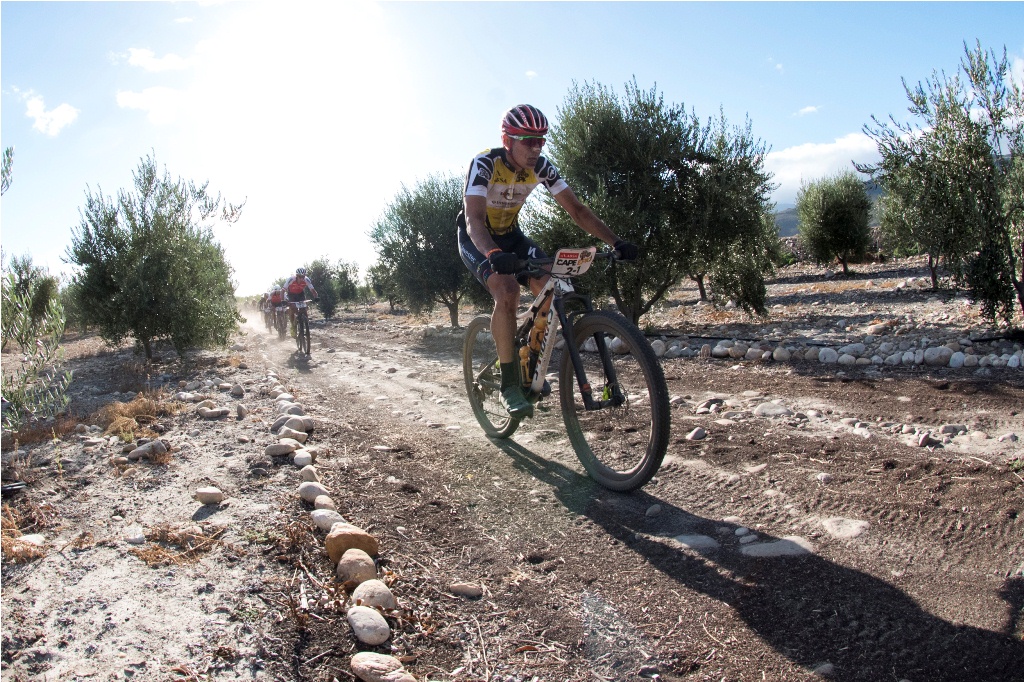 Rohrbach and Geismayr used the tow to recoup some energy and attacked soon after the chase group caught Fumic and Avancini. As they were in 4th place on the general classification, over 10 minutes down, Cannondale and Investec-songo-Specialized allowed the Centurion Vaude team to slip off the front and the pair crested Bainskloof Pass with a 45 second lead. On the run in to the finish the larger group gradually reeled in the solo leaders and with Rohrbach and Geismayr in his sights Kulhavý could not help but give chase. Despite reducing the gap to just 18 seconds the Investec-songo-Specialized team simply ran out of road within which to make the catch and had to settle for second. The upshot of Kulhavý’s late surge was the shedding of Cannondale Factory Racing from the second group, Fumic and Avancini lost 1 minute and 55 seconds to the yellow jersey wearers.

In the women’s race Annika Langvad and Kate Courtney once again employed cautious tactics in the first half of the stage before exerting pressure in the final 55 kilometres, when the going got truly tough. With Ariane Lüthi and Githa Michiels having withdrawn, due to Michiels developing a fever after Stage 3, the Investec-songo-Specialized women’s main competition on the stage came from Mariske Strauss and Annie Last, of Silverback-KMC, and Ascendis Health’s Robyn de Groot and Sabine Spitz. 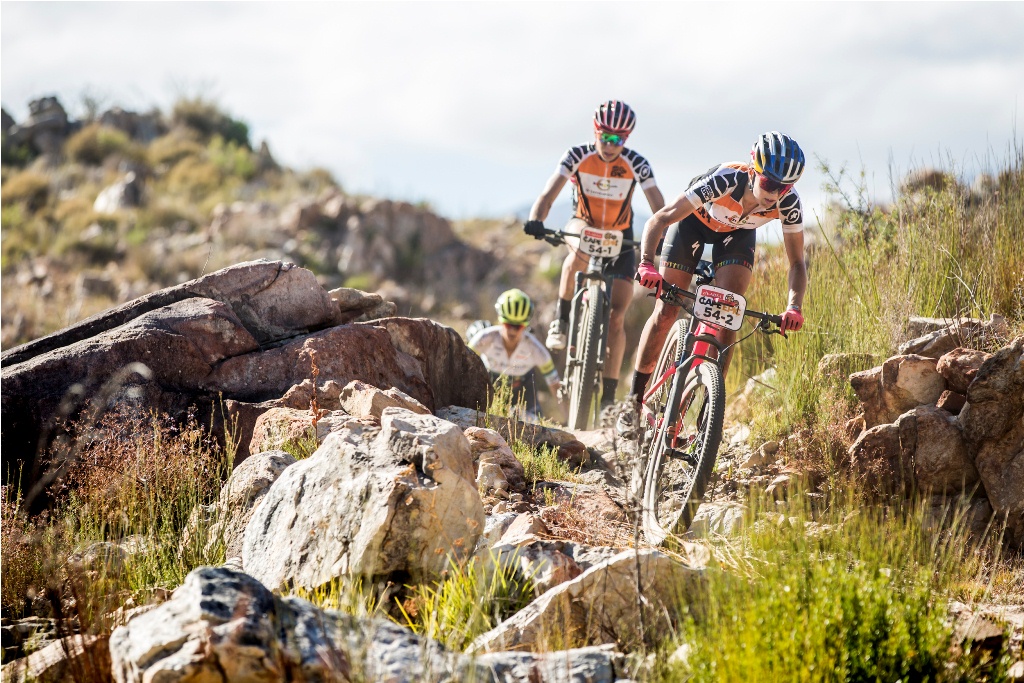 Kate Courtney leads Annika Langvad through one of the many technical sections of singletrack which characterised Stage 4 of the Absa Cape Epic.

The pair showed their rivals a clean pair of wheels on the Goudini Spa singletrack climb and rode the remainder of the route on their own, increasing the speed in an effort to escape the rising heat as much as to establish a greater buffer to the teams behind them. They crossed the finish line 8 minutes and 24 seconds ahead of Strauss and Last extending their general classification lead over the Silverback-KMC team, who now find themselves in second, to 32 minutes and 35 seconds. The result was the perfect birthday present for Langvad.

The TJ songo-Specialized team of Sipho Madolo and Azukile Simayile had a tough day on the trails. Already at water point 2, 45 kilometres into the stage at Du Toitskloof Wines, Madolo was struggling. “Sip (Madolo) is having a bad day, we will just have to try to survive the stage” Simayile said, as he waited for his partner to stock up on nutritional products at the water point. Survive they did, and though they slipped back outside of the top 100 teams on the general classification they still have three stages within which to make up time. 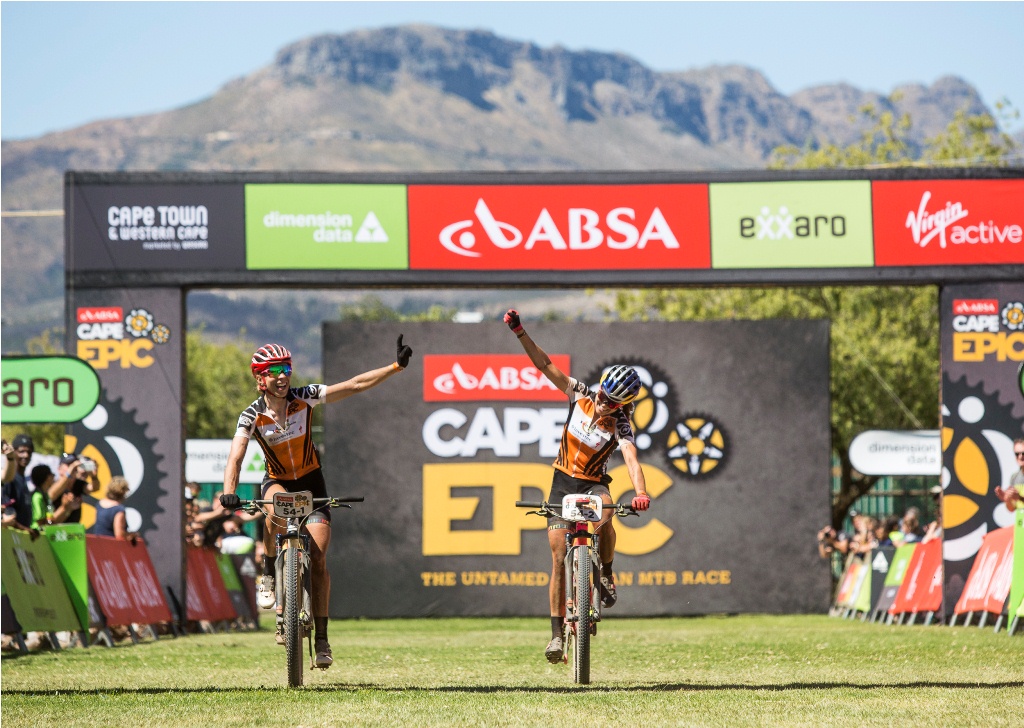 A perfect 5 from 5 for Annika Langvad and Kate Courtney. Photo by Sam Clark/Cape Epic/SPORTZPICS.

Anrique Davids and Ntlantla Nonkasa continued their climb up the general classification leader board as the lightweight pair excelled on the technical and sandy trails. Their strong showing on the Queen Stage saw them move inside the top 200 teams overall.

Lwazi Ntsakaza and Sikhusele Bhungane of Investec Songo 2 had a very long day on the trails, finishing just 14 minutes short of the 9 hour mark. The succession of long days had clearly taking their toll on the young riders and though the time trial stage to follow is exceptionally challenging, it will at least provide a shorter day on the bike.

Stage 5 of the 2018 Absa Cape Epic is the first mid-race time trial in the event since 2011, the race against the clock sees the riders take on a 39 kilometre long route with 1 430 metres of climbing. The top 40 elite men will start first, in reverse general classification order; followed by the top 10 elite women, also in reverse general classification order. Though the Investec-songo-Specialized teams will be the last pairings out of the start gate they will only have timing information relayed, by a support team member, to them at the day’s sole water point 19 kilometres into the stage. 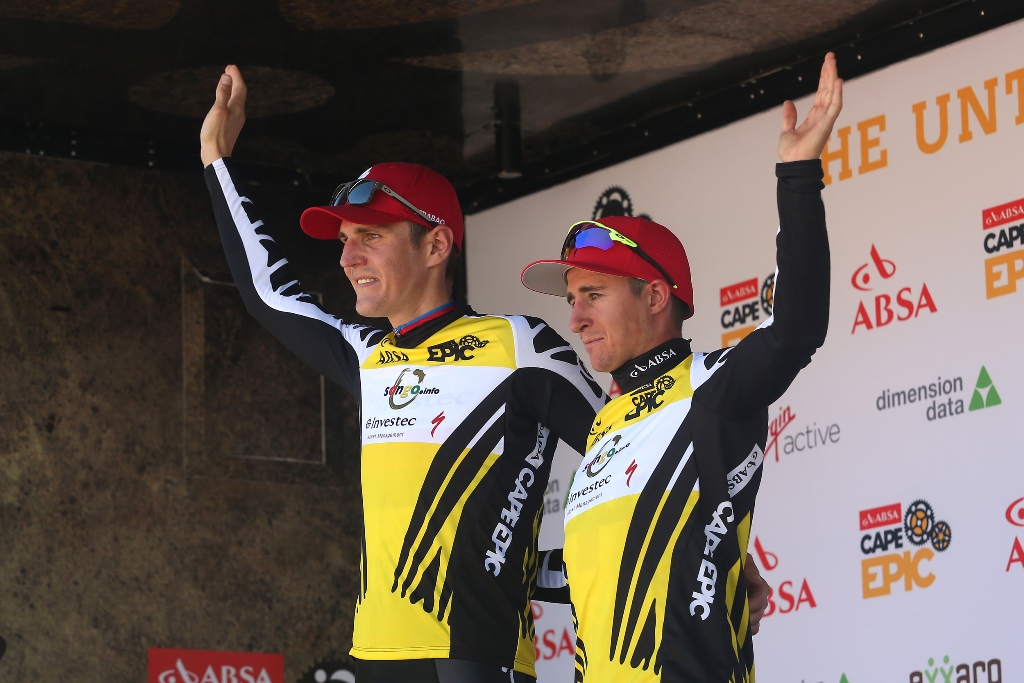 Jaroslav Kulhavý and Howard Grotts fought back from 2 minutes down at one point to extend their general classification advantage over Cannondale Factory Racing. 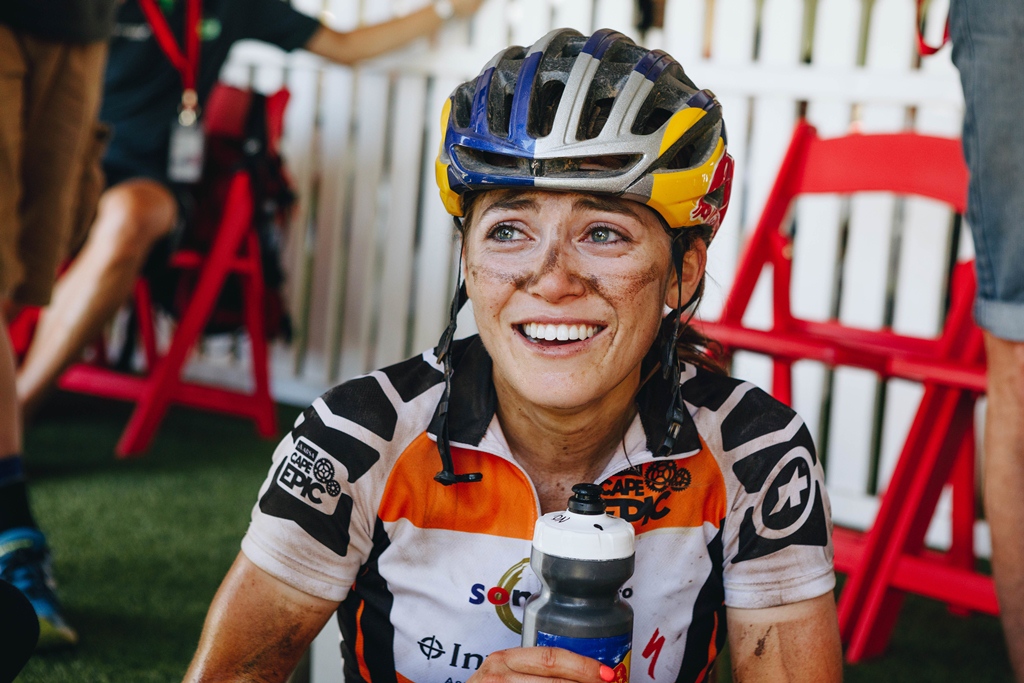