Investec-songo-Specialized Reign Supreme against the Clock

Investec-songo-Specialized Reign Supreme against the Clock

Both the elite men’s and women’s Investec-songo-Specialized teams of Annika Langvad and Kate Courtney, and Jaroslav Kulhavý and Howard Grotts secured stage wins on Stage 5 of the Absa Cape Epic. The 39 kilometre long time trial, which took place on the trails around Wellington on the 23rd of March, saw the men win their first stage of the race and the women claim their sixth.

With the UCI riders starting in reverse general classification order the TJ songo-Specialized pair of Sipho Madolo and Azukile Simayile were the first riders off the start ramp. Madolo and Simayile have endured a difficult Cape Epic so far but they were happy with their time of 2 hours, 11 minutes and 41.6 seconds. “We both had good days today, the best of the Epic I would say” Madolo reflected. “We went out fast to make sure we did not get caught in the singletracks” he continued. Picking up the story Simayile added: “The trails were amazing today, I really enjoyed the riding.”

At the front of the UCI men’s field the stage went perfectly for Kulhavý and Grotts. The pair rolled off the start ramp 3 minutes after their closest general classification rivals Manuel Fumic and Henrique Avancini, but by the time they reached the summit of the day’s main climb, at the 27km mark, they had caught up to the Cannondale Factory Racing riders. They did not ease up after passing Fumic and Avancini however, continuing to power on towards the finish line in search of the stage win which had eluded them to that point in the race.

Upon crossing the line in a time of 1 hour, 44 minutes and 49.6 seconds they secured the stage victory by a whopping 33.2 seconds over Fabian Rabensteiner and Michele Casagrande, of Trek Selle San Marco 2. The Canyon Topeak pairing of Alban Lakata and Kristian Hynek were third and moved up to second on the general classification standings, as they too capitalised on Cannondale Factory Racing’s bad day at the office. 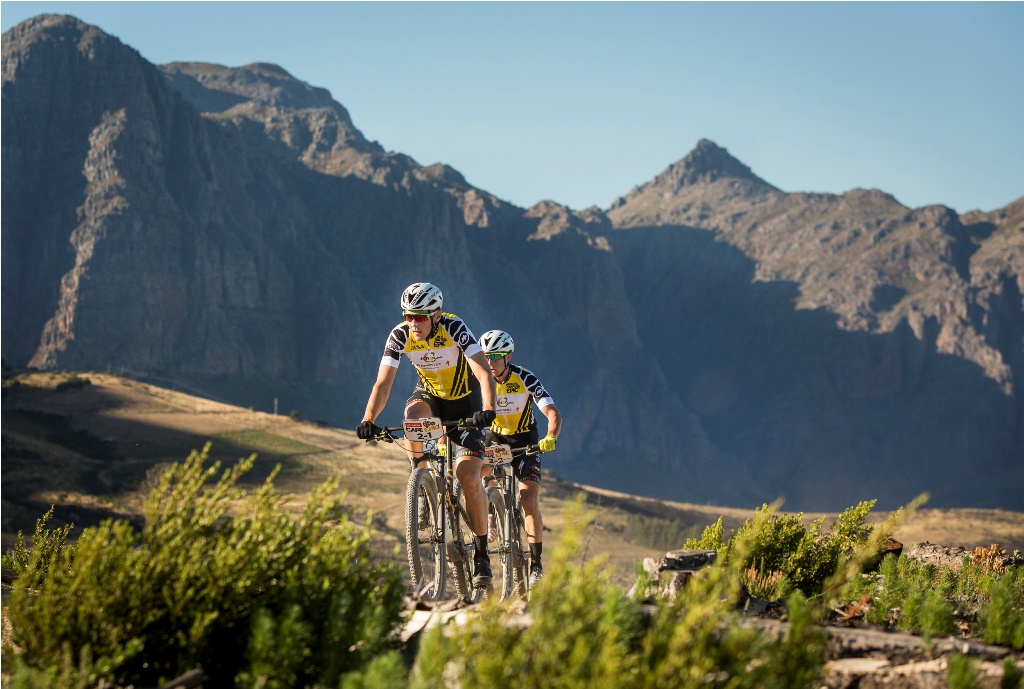 “It’s amazing! It was a great day for us” Kulhavý said once he and Grotts had been confirmed as stage winners. “We have had so many troubles in the Epic but today was perfect” the 2012 Olympic Champion stated. Echoing his teammate Grotts confirmed: “We were running like a well-oiled machine out there, everything was perfect.”

The women’s team of Langvad and Courtney put in a similarly perfect performance. Having been 31 seconds down, on Ascendis Health, at the stage’s only time check, 19 kilometres into the route, they finished strongly; crossing the line with the fastest time of the day. In so doing extending their general classification lead by 12.5 seconds over Robyn de Groot and Sabine Spitz, who finished the stage in second and by 2 minutes and 52.2 seconds over Mariske Strauss and Annie Last, the third placed team on the stage. The Investec-songo-Specialized women’s general classification lead now stands at 35 minutes and 27.8 seconds over the Silverback-KMC team of Strauss and Last. 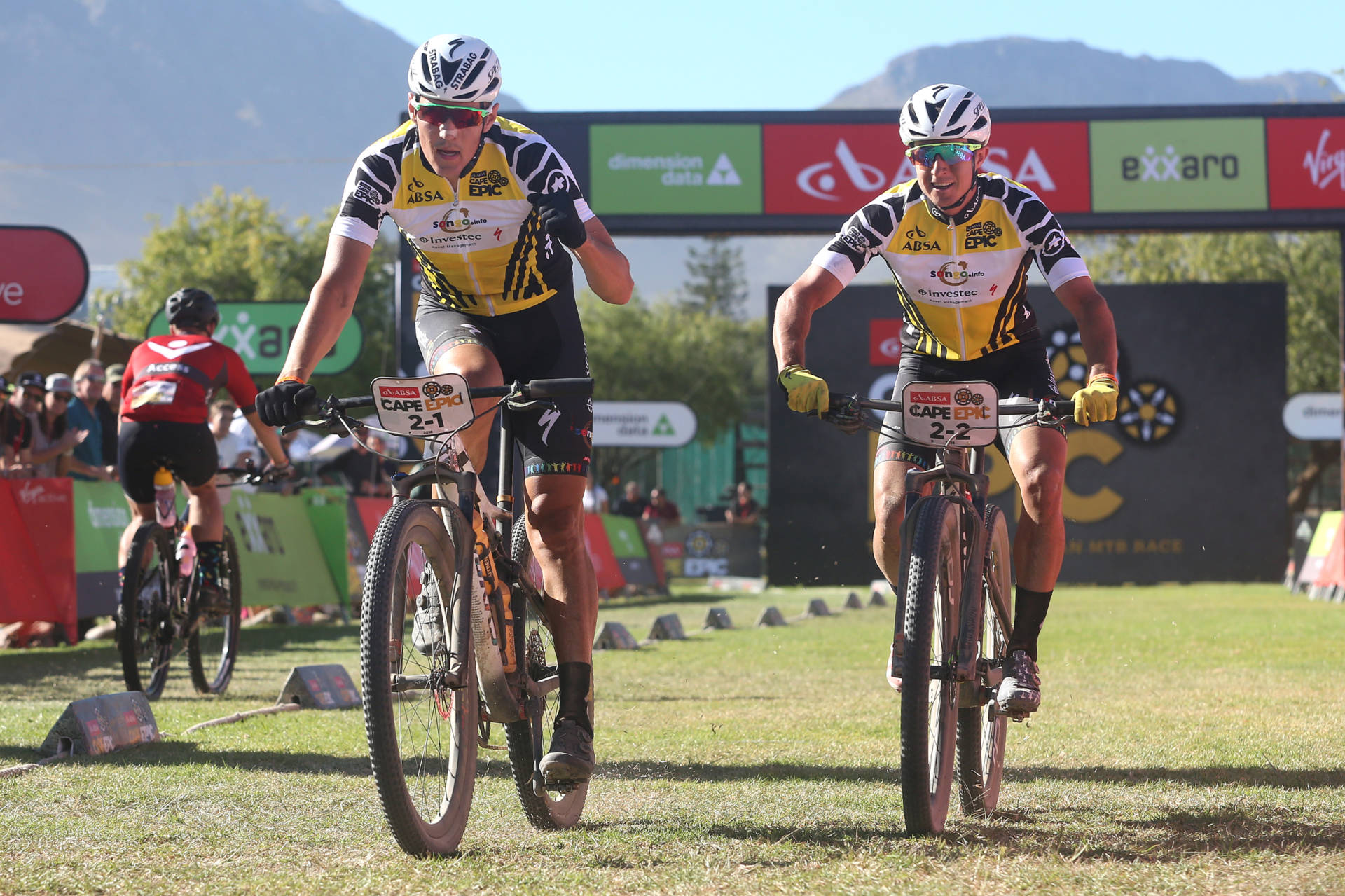 Speaking post-stage Langvad in her understated manner said: “We just went nice and steady today. We’re counting down the days to the finish now.” Adding to Langvad’s answer Courtney confirmed: “The time trial had its own challenges, especially coming after a really long day yesterday. But we were able to ride with a lot of control and not take any risks.”

After the UCI men and women the remaining riders started in general classification order, which meant that the Investec songo 1 team of Anrique Davids and Ntlantla Nonkasa started just after 9 am, while the Investec songo 2 squad of Lwazi Ntsakaza and Sikhusele Bhungane started in the sweltering heat at 10:15. 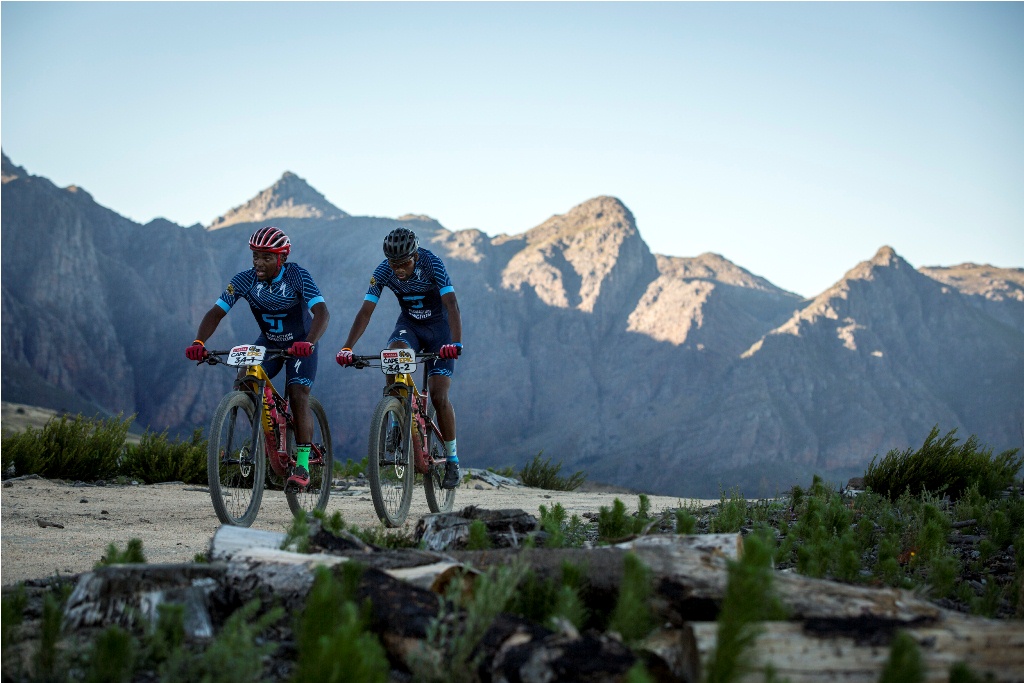 The day’s first starters, Sipho Madolo and Azukile Simayile, had their best day of the Absa Cape Epic on the tough time trial stage. Photo by Nick Muzik/Cape Epic/SPORTZPICS.

With the temperatures reaching the 30 degree Celsius mark before Ntsakaza and Bhungane started and with 1 450 meters of climbing on the cards for in the stage it was always going to be a difficult one. Both teams managed to pull through; finishing in 2 hours, 55 minutes, and 56.4 seconds; and 2 hours, 56 minutes, and 45.5 seconds respectively. Impressively Ntsakaza and Bhungane were only 49 seconds slower on the stage than their Investec songo 1 companions Davids and Nonkasa.

The penultimate stage of the race features the largest accumulated elevation gain of the event, with 2 000 metres of climbing crammed into 76 kilometres. Once again the riders will be taking to the trails around Wellington but their thoughts are already turning to Val de Vie and the Grand Finale on Sunday. “There are just two stages left and the plan is to go full gas” Madolo said with a smile, echoing the sentiments, we are sure, of every Absa Cape Epic rider. Now it only remains to be seen how fast full gas is after 6 days or relentless racing.

Tune in on social media to follow the teams’ progress throughout the stage and the race by following @songoinfo on Twitter or @songoinfo on Instagram, and by liking songo.info on Facebook. To watch the live race broadcast from 10:00 daily visit www.cape-epic.com. 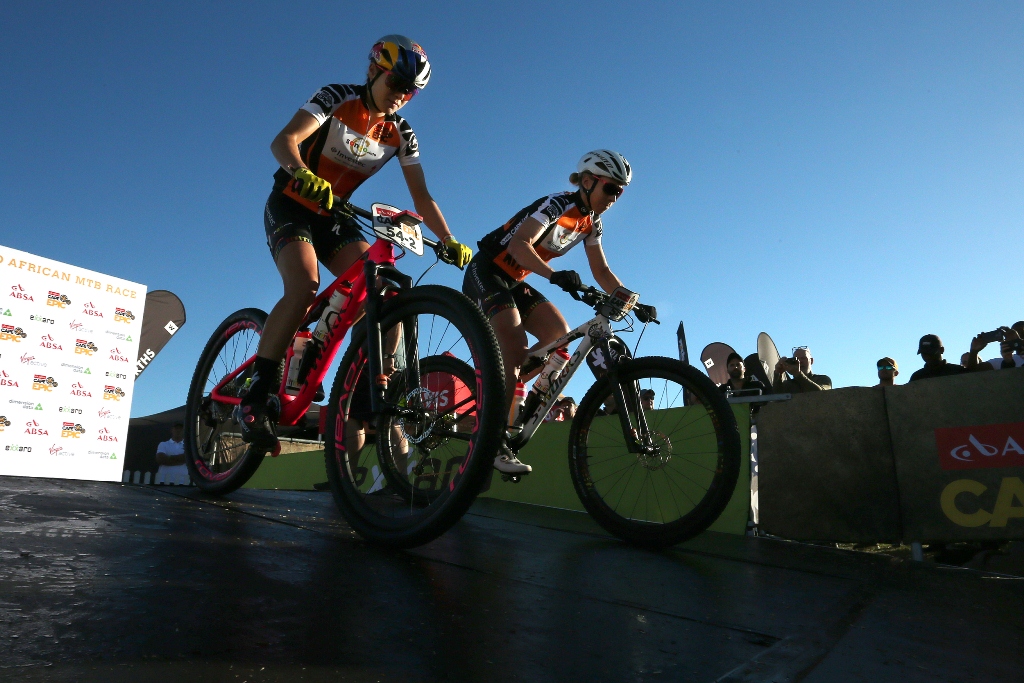 Annika Langvad and Kate Courtney roll off the start ramp during Stage 5 of the 2018 Absa Cape Epic. Photo by Shaun Roy/Cape Epic/SPORTZPICS. 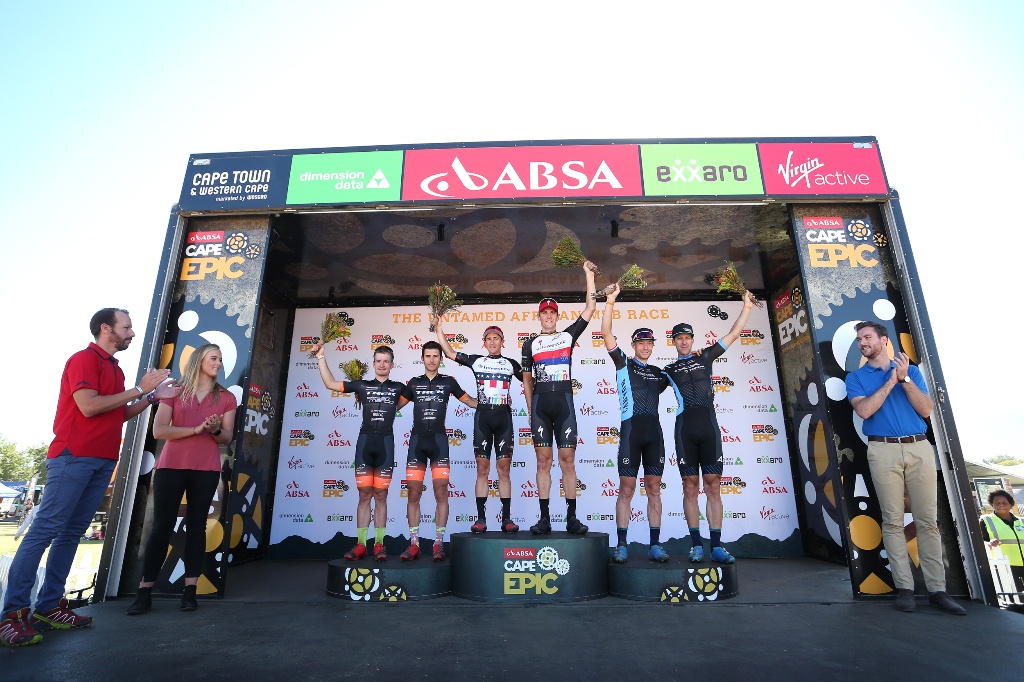 Jaroslav Kulhavý and Howard Grotts, finally secured the stage win which had eluded them on the first 5 days of the 2018 Absa Cape Epic during Stage 5. Photo by Shaun Roy/Cape Epic/SPORTZPICS. 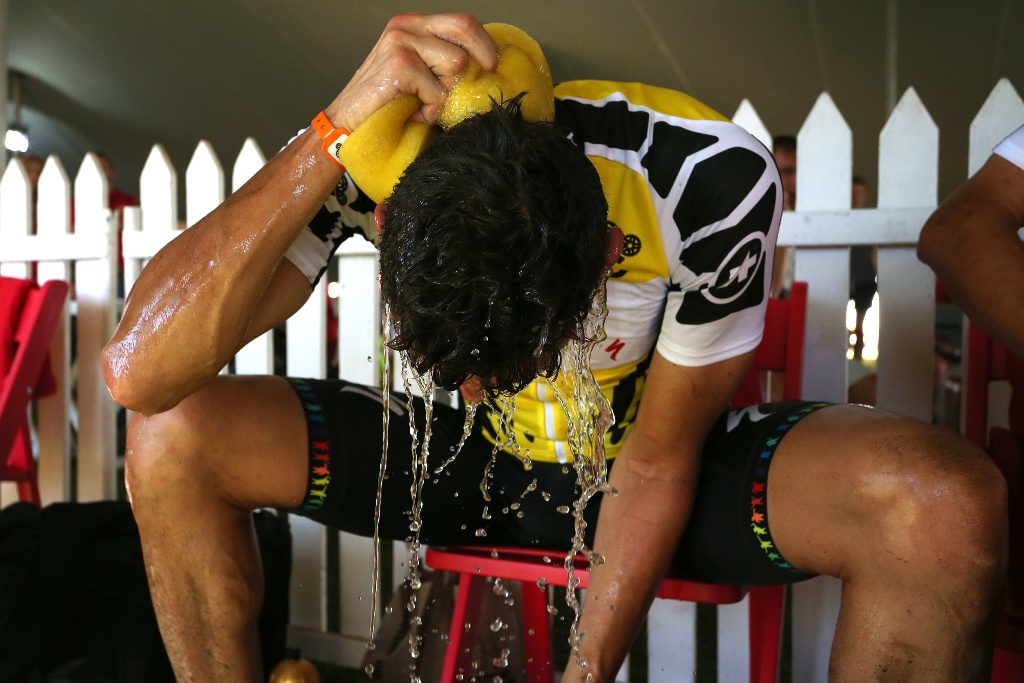 Jaroslav Kulhavý cools off post-stage as the mercury hit 30 degrees Celsius by 10am. Photo by Shaun Roy/Cape Epic/SPORTZPICS.