Investec-songo-Specialized ease the pressure ahead of the Grand Finale

Investec-songo-Specialized ease the pressure ahead of the Grand Finale

Victories by Jaroslav Kulhavý and Howard Grotts, in the UCI men’s category, and in the UCI women’s category, for Annika Langvad and Kate Courtney, further eased the pressure on the Investec-songo-Specialized squads ahead of the final stage of the 2018 Absa Cape Epic. On the penultimate stage of the race on the 24th of March, around the Winelands town of Wellington, the race leaders extended their general classification leads over all their rivals.

The 76 kilometre long stage featured a brutal 2 000 metres of climbing, but despite a tough week of racing Kulhavý, Grotts, Langvad and Courtney were all still in feeling strong enough to go on the offensive. Rather than riding to conserve their leads they followed the philosophy of attack being the best from of defence.

Kulhavý and Grotts allowed Cannondale Factory Racing’s Manuel Fumic and Henrique Avancini to thin out the lead group until only Canyon Topeak, BUFF SCOTT, of Trek Selle San Marco 2, NAD Pro MTB and Investec-songo-Specialized remained in contention with the German/Brazilian combination. Then on the toughest climb of the day, the Green Mamba, Kulhavý and Grotts made their move.

At the top of the climb, near the 44 kilometre mark, the pair had a slender 15 second lead but managed to extend it throughout the rest of the stage, eventually crossing the finish line 1 minute and 6 seconds ahead of Fabian Rabensteiner and Michele Casagrande of Trek Selle San Marco 2. The Cannondale Factory Racing pair of Fumic and Avancini crossed the line a further second down on the stage winners, but did enough to move back up to second position on the general classification – overhauling the Canyon Topeak team of Alban Lakata and Kristian Hynek, who finished fifth on the stage. 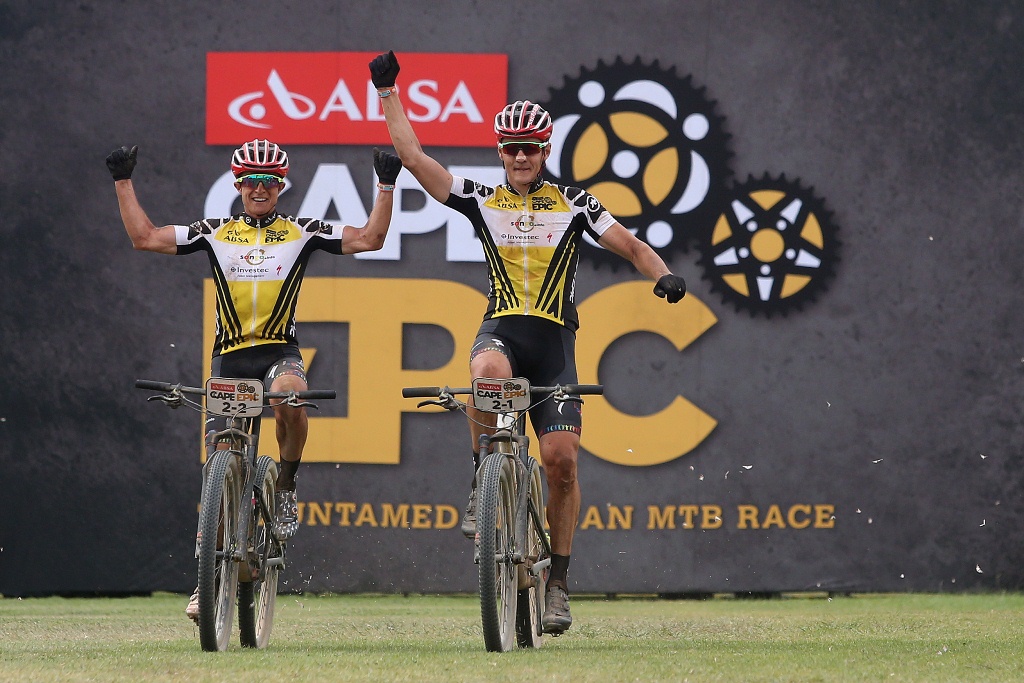 In the women’s race Langvad and Courtney established a 30 second lead after an hour and a half of racing, but the real drama was unfolding behind the Investec-songo-Specialized pair. Mariske Strauss, of Silverback-KMC, had appeared off colour on Stage 5 and that start of an illness had developed into a gastroenteritis infection. This left Ascendis Health’s Robyn de Groot and Sabine Spitz as the race leader’s main rivals on the stage. Despite the pair’s best efforts they could not close the gap to Langvad and Courtney, resulting in the Danish/American pairing securing their seventh stage win and maintaining the chance of a clean sweep of stage victories, the first since Sharon Laws and Hanlie Booyens in 2009.

Though Langvad and Courtney have undoubtedly been a class apart, the fact that they have remained healthy throughout the race speaks volumes for their and the Investec-songo-Specialized support crew’s attention to detail. Planning for and completing an eight day stage race perfectly is a daunting task so Langvad’s systematic approach is key to her continued success. “I just break it up into little pieces, and try do each section as well as possible” the Dane said post stage. 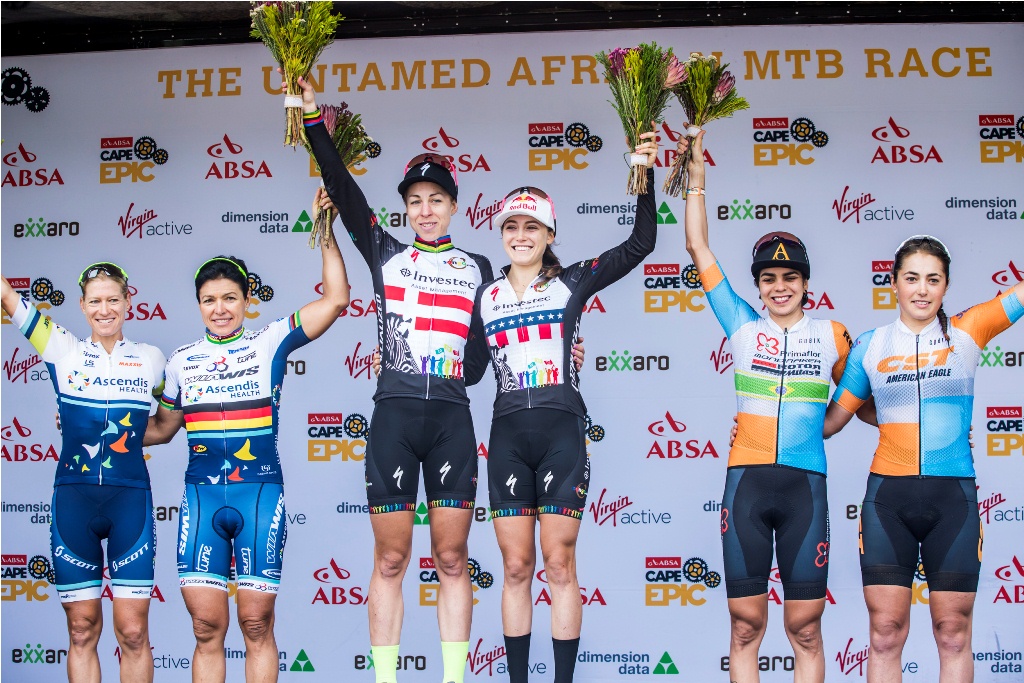 Annika Langvad (centre left) and Kate Courtney (centre right) are on course for a clean sweep of stage victories, a feat not achieved since 2009 at the Absa Cape Epic. Photo by Ewald Sadie/Cape Epic/SPORTZPICS.

“They were smiling from ear to ear when they got back to the camper” Madolo commented. “Today was a good day” Davids confirmed. “Yesterday, despite breaking a rim and having to put a tube in we finished nice and early. It was the first time I managed to have an afternoon nap and it really helped. I felt refreshed this morning and as a result had good on the bike” Davids concluded. 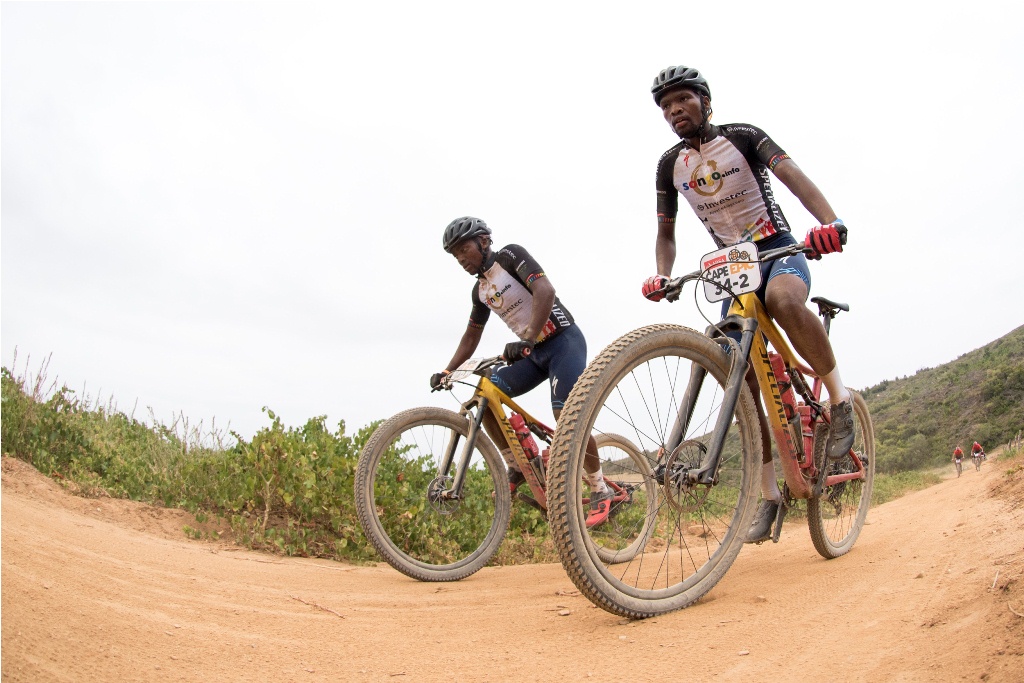 The 70 kilometre long grand finale – which separates Langvad from her fourth title, Kulhavý from his third and the two young Americans, Grotts and Courtney, from becoming the first Absa Cape Epic winners from the USA – is anything but a procession. The stage features a gruelling 2 000 metres of climbing and covers some very tough terrain on the route from Wellington to Val de Vie, outside Paarl. Anything can still happen though; so Kulhavý, Grotts, Langvad and Courtney will need to remain focused to ensure they stand on the top step of the podium on Sunday afternoon. 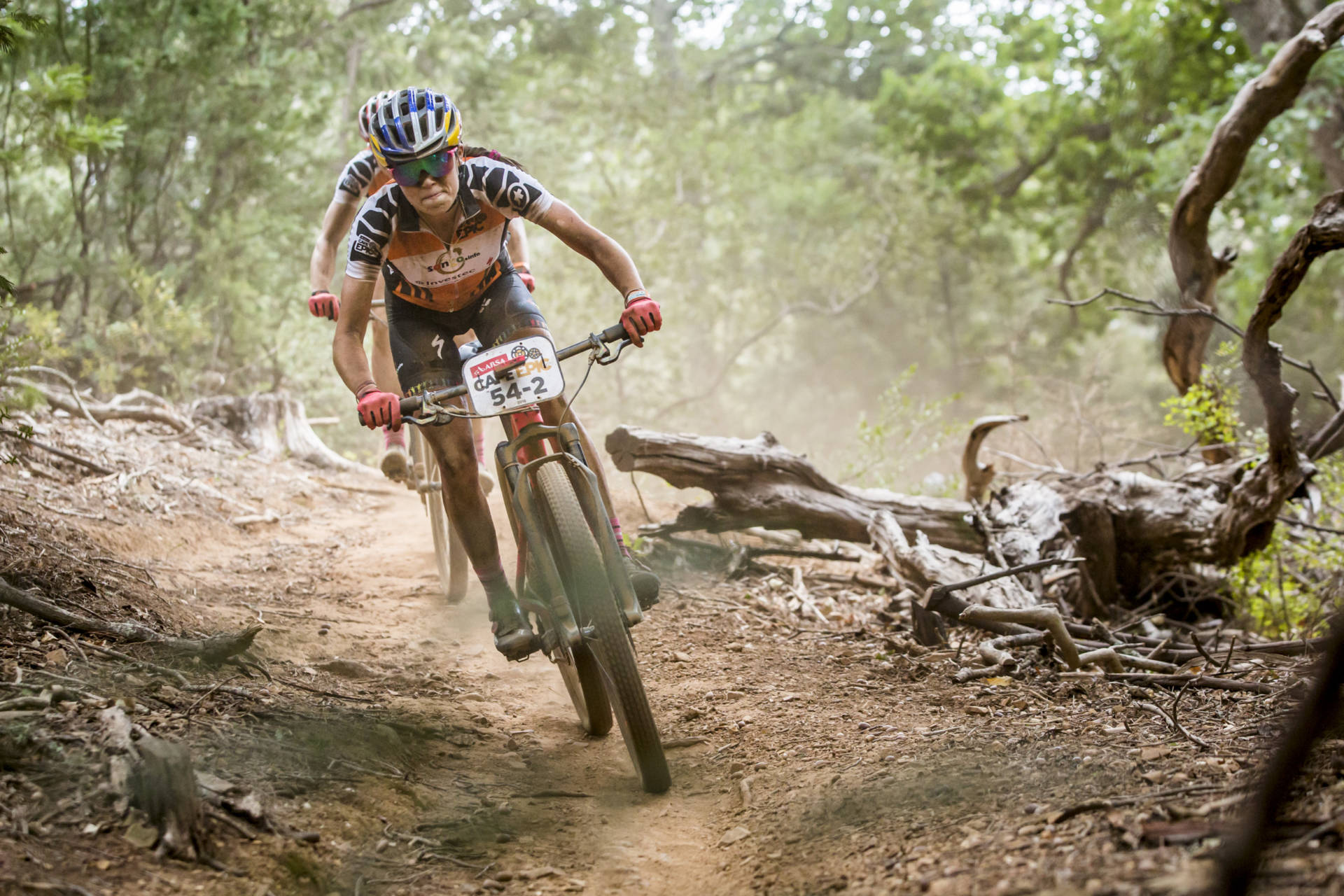 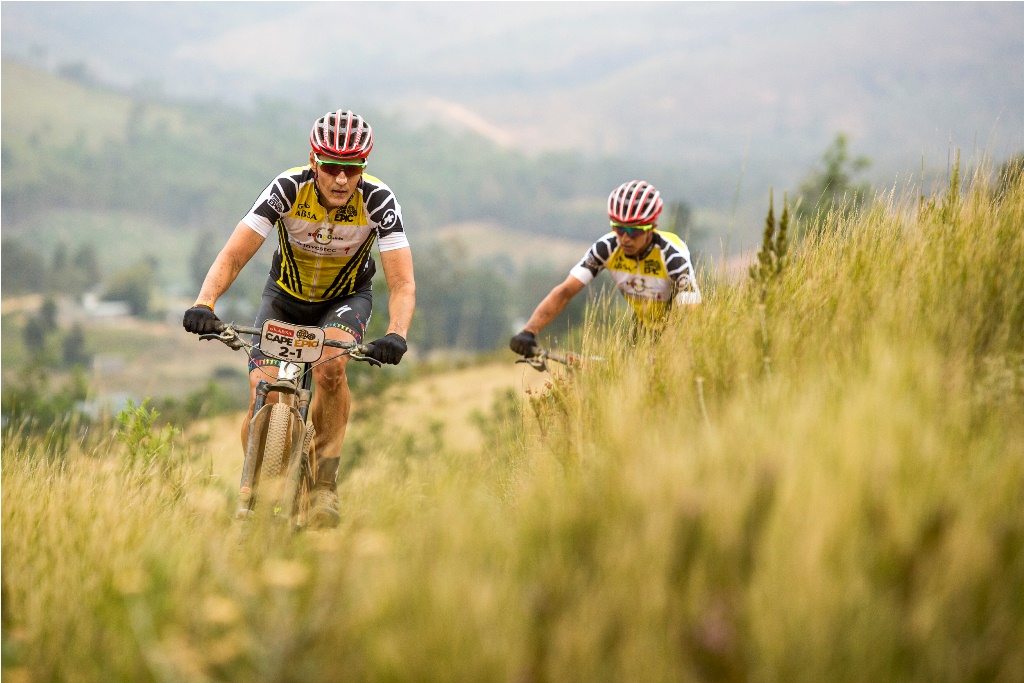 Jaroslav Kulhavý and Howard Grotts broke away from the rest of the main contenders on the Green Mamba climb and soloed to stage victory. Photo by Sam Clark/Cape Epic/SPORTZPICS. 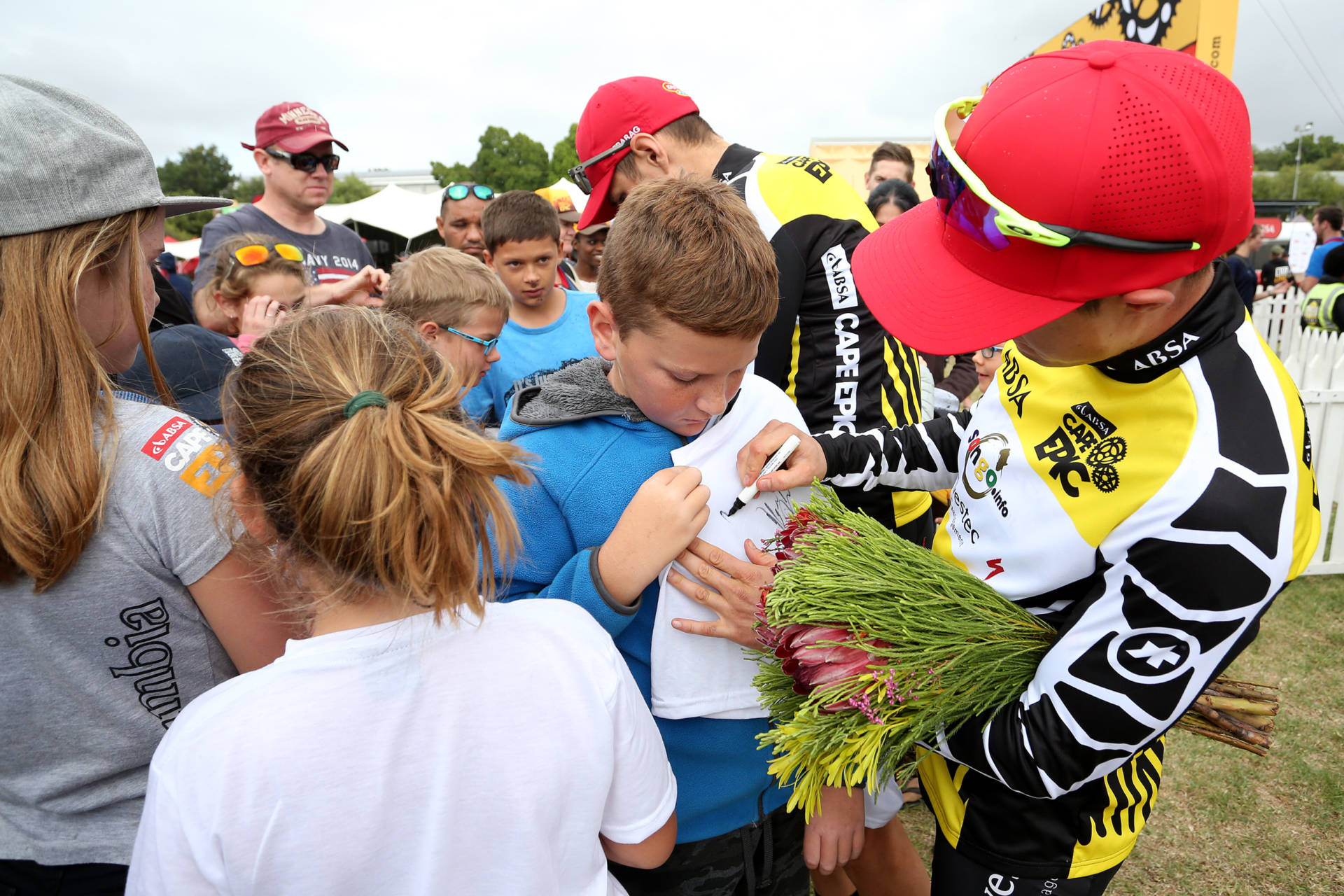