The Investec-songo-Specialized teams of Annika Langvad and Kate Courtney; and Jaroslav Kulhavý and Howard Grotts rode to Absa Cape Epic glory on Sunday the 25th of March as they crossed the finish line at Val de Vie Estate. In doing so the team became the first to win the UCI men’s and women’s categories in a single race; while Langvad became the most successful woman in the race’s history, Kulhavý joined the illustrious three time winners club and Grotts and Courtney became the first American winners of the untamed African mountain bike race.

The 67 kilometre long final stage was filled with drama as the UCI Commissaires had to adjudicate a racing incident between Manuel Fumic and the Canyon Topeak 2 rider Jeremiah Bishop. The incident happened behind the yellow jersey wearers though; allowing Kulhavý and Grotts to ride a trouble free stage, crossing the line in second position – behind the stage winning Trek Selle San Marco 2 pairing of Fabian Rabensteiner and Michele Casagrande.

“It’s amazing” Kulhavý enthused after being confirmed as the 2018 Absa Cape Epic champion alongside Grotts. “We had a pretty good eight days and I’m really happy, but especially for Howie (Grotts) because he’s a newbie here.” Picking up the story of their Cape Epic, Grotts recounted: “I learnt it’s not over until it’s over. There was one day were I was completely empty but then sure enough, you kind of bounce back.”

When asked if they would be returning to defend their titles in 2019 Grotts was quick to respond: “I’m sure the team will ask me and I won’t say no.” The three time winner, Kulhavý, relaxed his serious racing demeanour, with the pressure of the contest lifted, and cracked a joke at Investec-songo-Specialized team mentor Christoph Sauser’s expense. “It was amazing winning with Howie and Susi (Christoph Sauser) has five victories so maybe…” he trailed off with a devilish smile, alluding to his future plans for returning to South Africa. 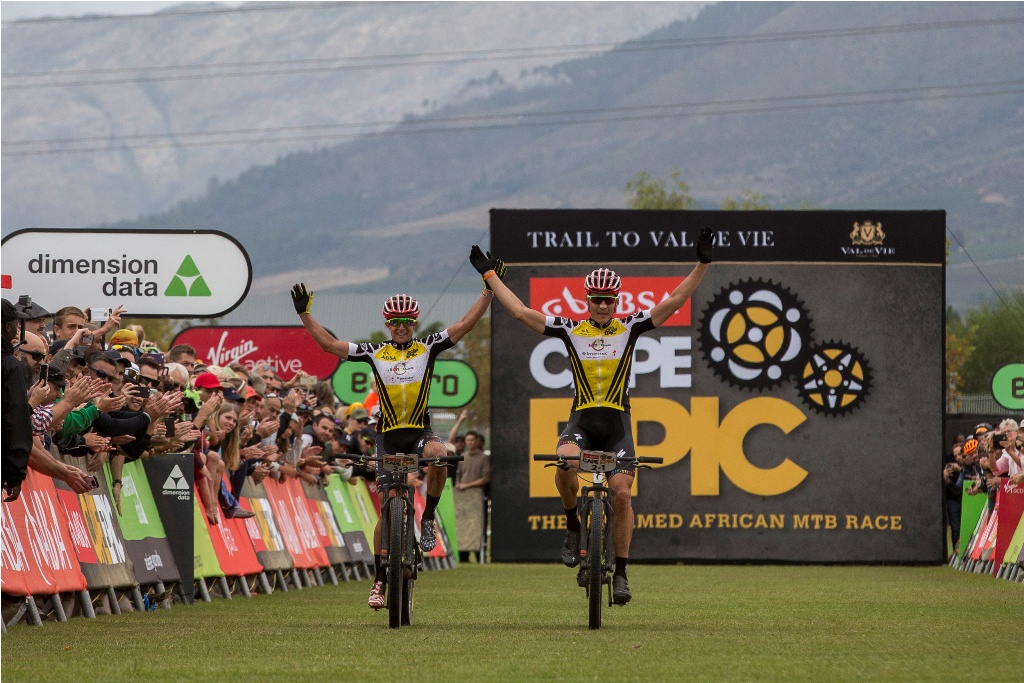 The UCI women’s team of Annika Langvad and Kate Courtney, with a comfortable general classification lead could afford to shadow their closest rivals, Robyn de Groot and Sabine Spitz during the final stage rather than take up the pace setting duties once more. Riding at a slightly lower intensity than they had for the rest of the week they were afforded the opportunity to allow the magnitude of their success to sink in.

The pair crossed the finish line in fourth position, as Margot Moschetti and Raiza Goulao, of PMRA/CST Racing took the stage honours. Langvad became a four-time winner of the Absa Cape Epic when she, and Courtney, crossed the finish line of the Grand Finale. In so doing she pulled clear of former teammate Ariane Lüthi on three victories, and now lies only one behind the all-time-greats of the race: Christoph Sauser and Karl Platt. At only 34 years of age, and having won each edition of the race she has taken part in, it seems likely that the Dane will surpass Sauser and Platt. 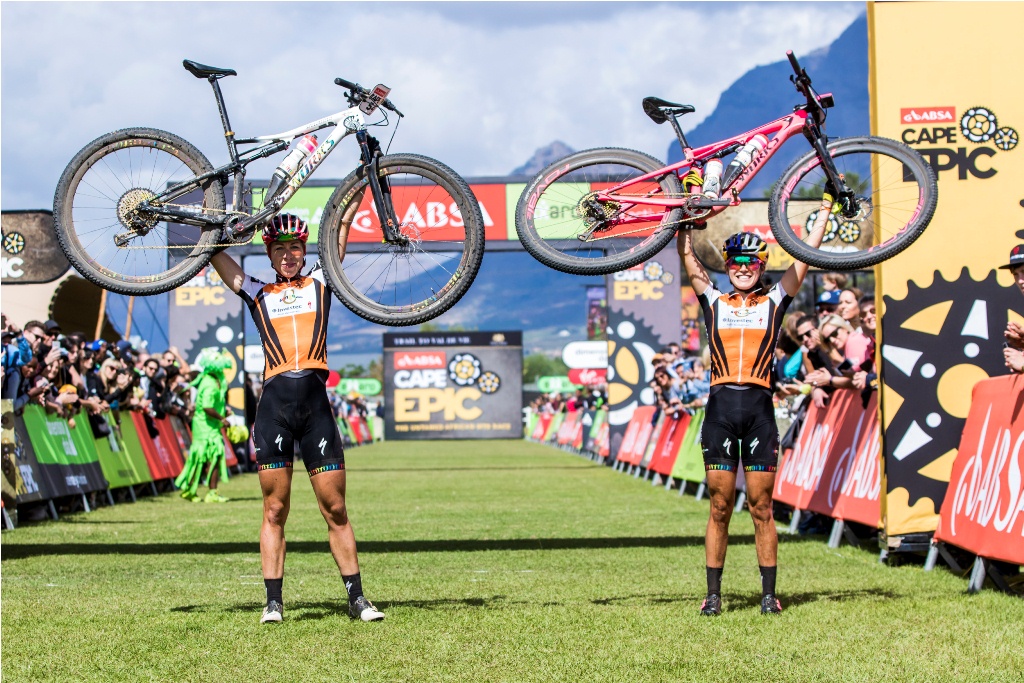 2018 Absa Cape Epic champions, Annika Langvad and Kate Courtney hoist their bikes into the air in celebration after sealing their victory. Photo by Ewald Sadie/Cape Epic/SPORTZPICS.

“We have been working so hard all week and today we just wanted to be safe” Langvad said post stage. “It is definitely a little bit of an emotional finish for me” Courtney began when asked how it feels to be crowned an Absa Cape Epic winner. “When I set out to do the Cape Epic as my first marathon event, and first stage race, people thought I was a little crazy. But my inner circle really supported me and pushed me to get here. And Specialized gave me the opportunity to race with one of my heroes in the sport and I really couldn’t have asked for a better experience” the young American concluded.

The TJ songo-Specialized combination of Sipho Madolo and Azukile Simayile had started the Absa Cape Epic with hopes of a top 30 general classification result; but when it became clear that their form would not render that a possibility they reset their goals, taking every day as it came. As the race progressed they grew comparatively stronger and finished comfortably inside the top 100 teams, after flirting briefly with that barrier mid-week. “We’re not disappointed, it happens” Madolo said. “Now I’m just happy the Epic is finished” he continued. “Tonight we are going to have a party, I think,” Simayile added with a smile, “then next week we can see what races to do next.” 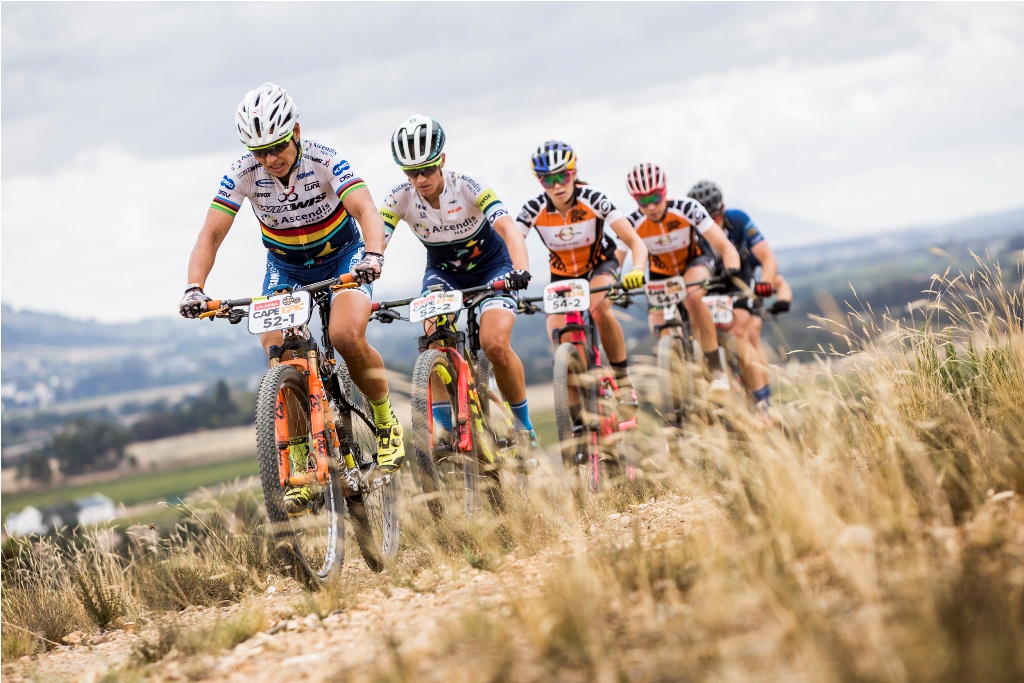 With a comfortable overall lead Kate Courtney and Annika Langvad could shadow their closest rivals, Ascendis Health, on the final stage rather than risk going on the offensive one final time. Photo by Ewald Sadie/Cape Epic/SPORTZPICS.

In their first Absa Cape Epic the Investec-songo 1 team of Anrique Davids and Ntlantla Nonkasa similarly improved later in the race. The pair finished in a credible 191st position, and credited their success as the week progressed to good team work. “We rode nicely together. I slowed down while Jersey (Ntlantla Nonkasa) was struggling and he waited for me when I couldn’t keep up” Davids said. “It was a great experience, but I’m glad to be finished now” a visibly exhausted Nonkasa concluded.

A number of the children from the songo.info programme had come to Val de Vie in order to cheer Davids, Nokasa and Investec Songo 2 squad of Lwazi Ntsakaza and Sikhusele Bhungane across the line. As if to honour their presence Ntsakaza and Bhungane had one of their best days of the race on the final stage, finishing in 248th place on the stage, nearly 100 places better than their overall position after the eight days of tough racing. 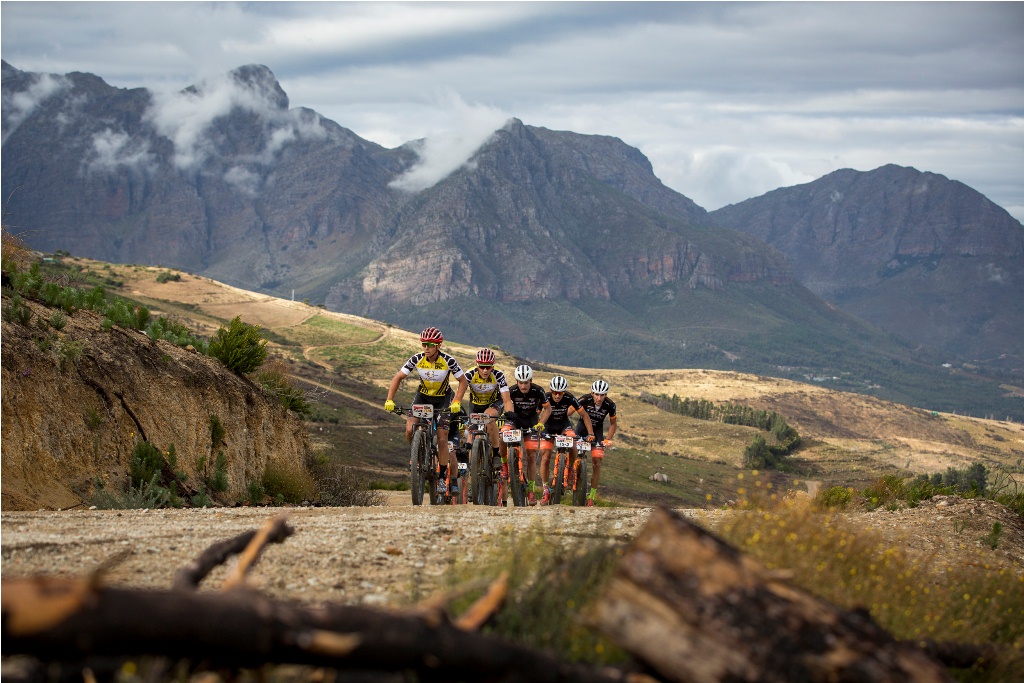 Howard Grotts leads Jaroslav Kulhavý and a number of other general classification rivals up one of the final climbs of the 2018 Absa Cape Epic. Photo by Nick Muzik/Cape Epic/SPORTZPICS.

The attention for the elite men and women now shifts back to the UCI Mountain Bike World Cup calendar and the second round of the cross-country series in Albstadt, Germany, in May. For the songo.info programme meanwhile the exciting final fundraiser of the Absa Cape Epic campaign still needs to be concluded. The auction for the race winning bikes, piloted by Jaroslav Kulhavý and Annika Langvad, will start on Monday afternoon at 12 mid-day and close at mid-day on Thursday the 29th of March. The auction will be conducted online at www.songo.info, with the bidding starting at R100 000 for these unique custom machines, which were kindly donated by Specialized Bicycles. 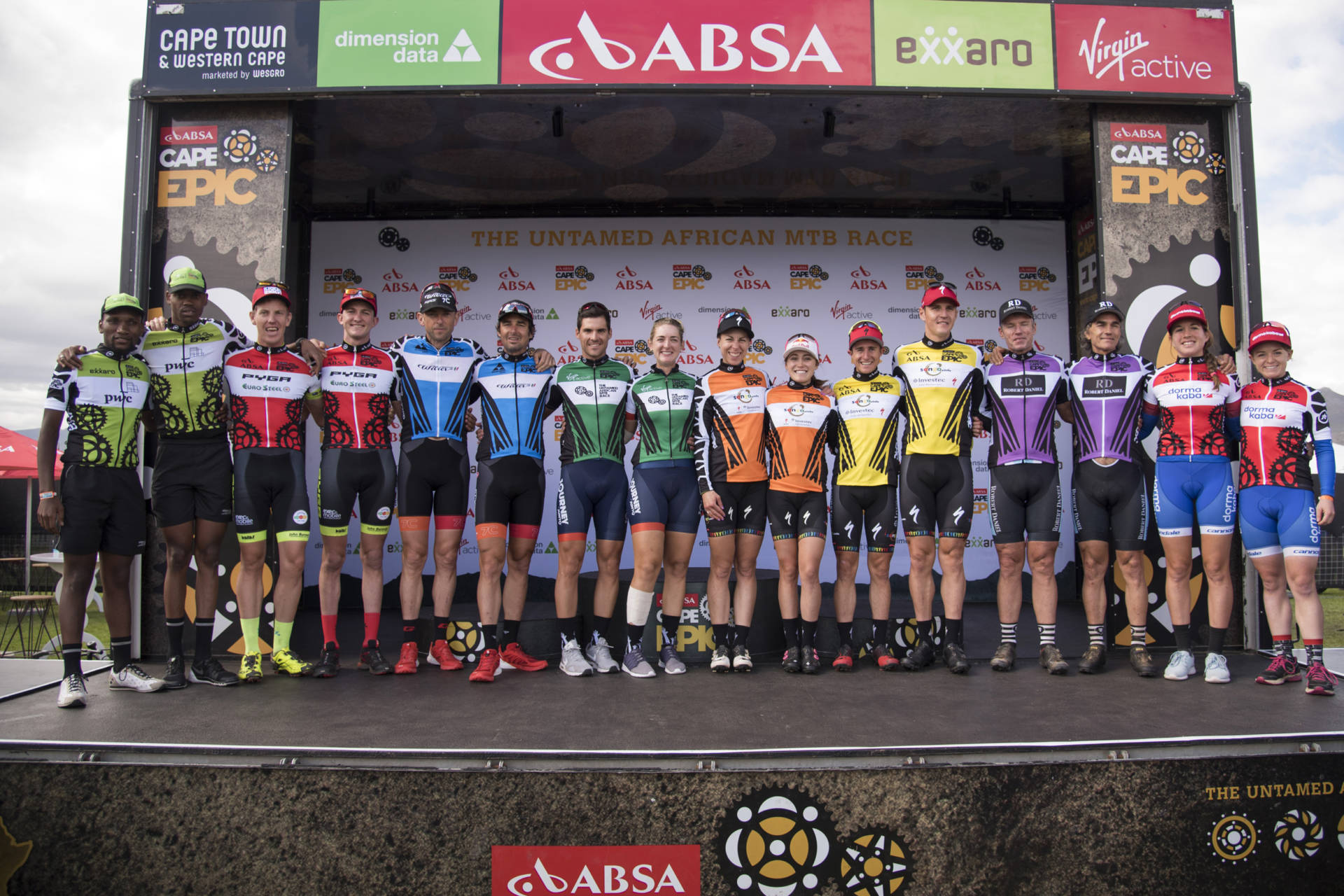 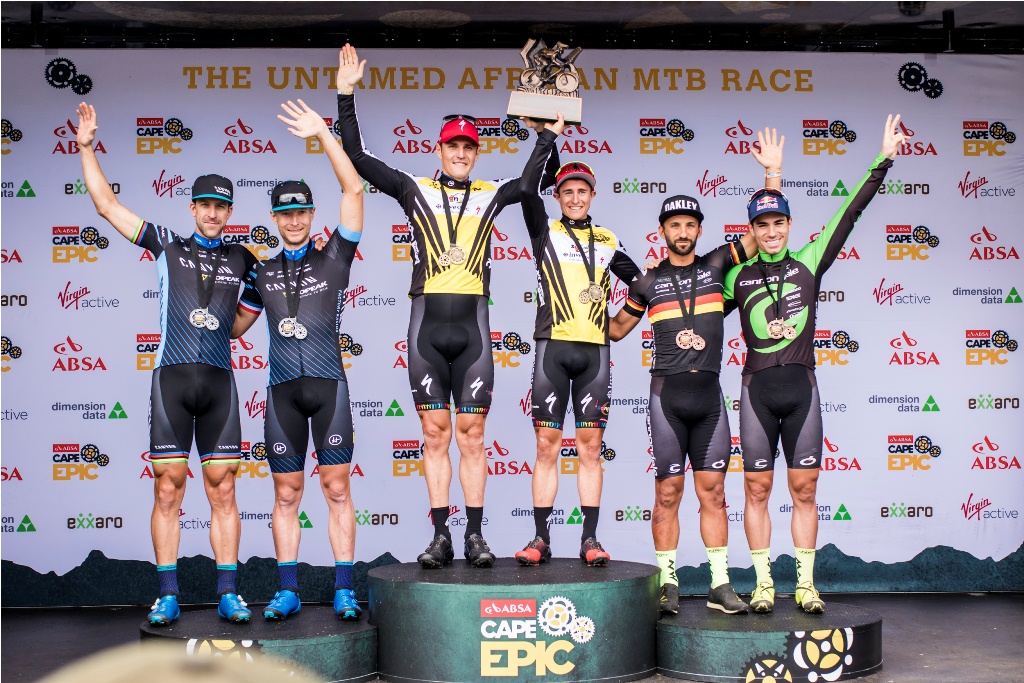