The second edition of the Chas Everitt Around the Pot, Overberg 100-Miler, on the 21st of July, saw HB Kruger and Kylie Hanekom race to victory. The race, which also featured a team categories as well as 25- and 60-Mile distances, saw a significant turn out of gravel bikes – with Hanekom winning the women’s race on a drop barred, thin wheeled bike.

Starting in thick mist at 7am in Swellendam, on Saturday morning, the 7 kilometre neutral zone along the national highway provided riders with the chance to warm their legs. Once the route tuned onto the gravel, and the flag dropped for the racing to begin, the pace was furious from the off. 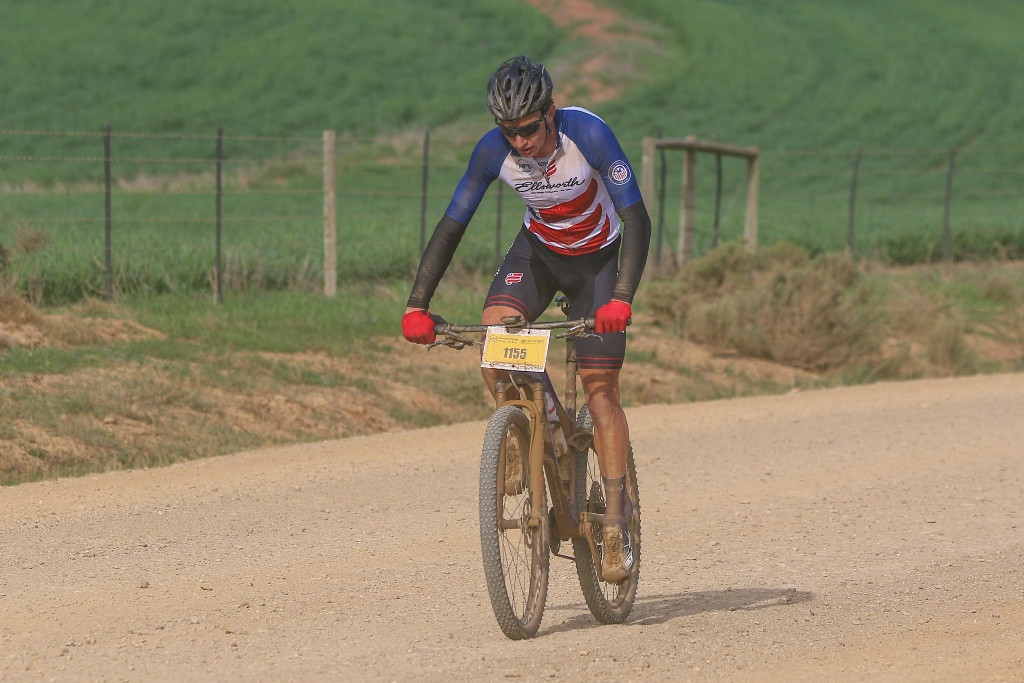 HB Kruger on his way to victory in the second edition of the Chas Everitt Around the Pot, Overberg 100-Miler. Photo by Oakpics.com.

“I got away right in the beginning with five other guys” race winner HB Kruger explained, telling how he, Timo Cooper, Izak Strauss and the winning men’s team of Charles Mcfall and Etnard Louw made the initial break from the rest of the field. The five spent the next 110 kilometres working together, until after the neutral zone at the Malgas Ferry.

With the 100- and 60-Miler routes crossing the Breede River at Malgas the timing was paused as the riders descended into the hamlet of Malgas and only restarted once they had crossed to the eastern bank of the river. Being drawn across one of the Western Cape’s largest rivers on a historic and human powered pontoon is one of the unique charms of the race. 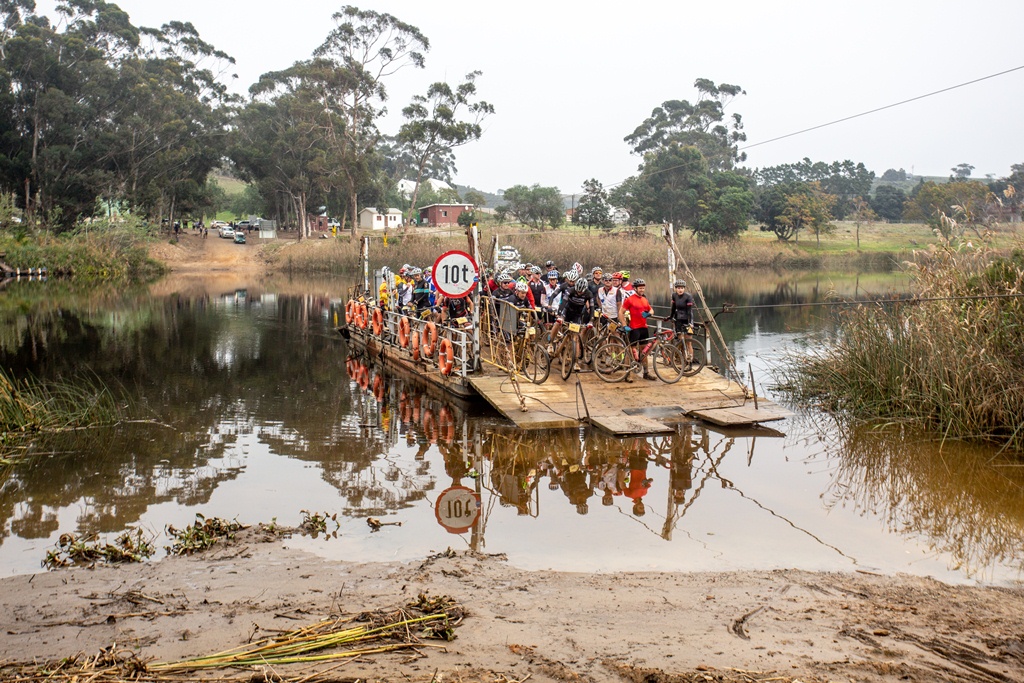 The trip across the hand-drawn ferry, which crosses the Breede River at Malgas, was one of the undoubted highlights of the Chas Everitt Around the Pot, Overberg 100-Miler. Photo by Oakpics.com.

“After about 110 kilometres I decided to increase the pace and then time trialled on my own to the finish” Kruger continued. The Ellsworth Bikes rider was clearly the strongest in the field; securing victory over Timo Cooper and Izak Strauss by 5 and 12 minutes respectively – with a winning time of 5 hours, 21 minutes and 20 seconds. As soon as he stepped of the podium Kruger was eager to commit to defending his title in 2019: “I’ll definitely be back and maybe riding on a gravel bike. I think it would have been faster,” he concluded.

Kruger’s assertion has yet to be proved as the majority of the field took part on mountain bikes, but there were a significant number of gravel bikes on the start line too. Mcfall was the first gravel bike rider home – crossing the line in a time of 5 hours, 27 minutes and 26 seconds – with Louw in the Men’s team category. After nearly three years of forum chat about gravel bikes being ideal for South African conditions it appears that the tide has truly turned and they have begun to garner a groundswell of support, with riders on bikes entering events. 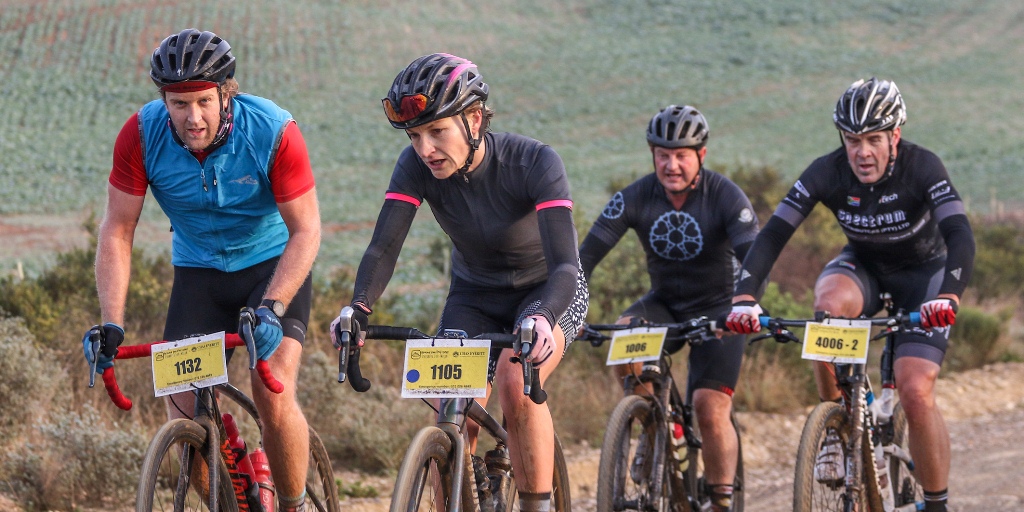 Kylie Hanekom, in action on her way to victory in the Chas Everitt Around the Pot, Overberg 100-Miler. Photo by Oakpics.com

The women’s champion Kylie Hanekom also rode a gravel bike to victory at the Around the Pot, Overberg 100-Miler. “It was a rad adventure riding a gravel bike at Around the Pot” Hanekom enthused. “There were kilometres of perfect gravel road and the trip across the pont, along with the roosterkoek at the water point there, was a definite highlight” the Specialized rider recounted. The 2018 champion held off Martha Koekemoer by 6 minutes and Alisha Myers by 9 minutes and to claim the title.

The team categories were as fiercely contested as the solo races. The men’s team champions were Mcfall and Louw, riding as Mad Macs powered by Hazz, while the Visseredwards team of Aryna Edwards and Carien Visser claimed the women’s team title. The honour of being the first woman across the line on the day fell to none other than Yolande de Villiers, who stopped the clock in an impressive time of 5 hours, 34 minutes and 32 seconds, alongside her Silverback – Morvelo teammate Neill Ungerer.

For more information on the 2018 Chas Everitt Around the Pot, Overberg 100-Miler, please visit www.petrichoradventures.co.za and be sure to visit the event’s Facebook page, Around the Pot, to view all the fantastic photos from the event. 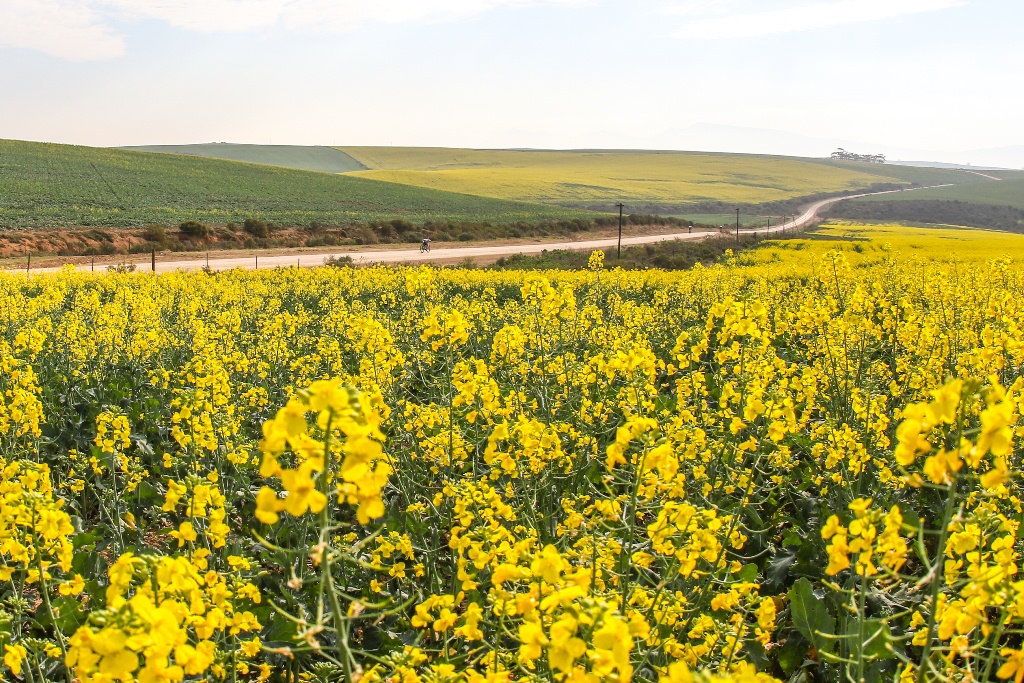 Canola fields in full bloom added a splash of yellow to the lush greens of the Overberg in winter. Photo by Oakpics.com. 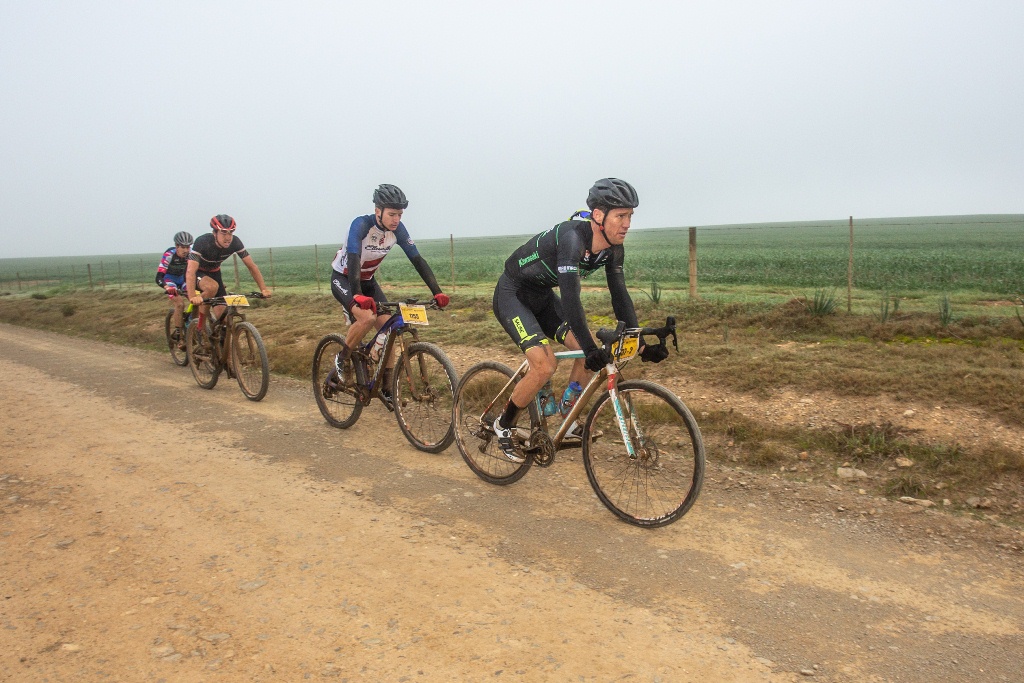 Charles Mcfall, leading HB Kruger, Timo Cooper and his partner Etnard Louw on a gravel bike, Mcfall was the first rider on narrow tyres to cross the finish line. Photo by Oakpics.com.