The 2018 Trans Baviaans Race, wrapped up with prize giving at the Fountains Mall on Sunday the 12th of August – but the racing action had concluded well over twelve hours earlier before the last light had faded over the Baviaanskloof. A consistent tail wind, smooth road conditions and a searing ride by DSV Pro Cycling ensured records tumbled throughout the categories in the fifteenth edition of the toughest team single stage MTB race in the world.

There was drama in the men’s race, outright dominance in the women’s and a legacy sealing victory in the mixed; as the racing categories were wrapped up within nine hours of the event’s start. Never have so many records been set in one event and the new men’s course record is all the more remarkable, given the teams setting it made a wrong turn.

The #TransBaviaans2018 race was won by Timothy Hammond & Ben Melt Swanepoel after chasing Gert Heyns & Arno du Toit for close on 200km. Take a look at how the race unfolded.

The race, which started in Willowmore on Saturday morning, was agitated from the off by the DSV Pro Cycling team of Gert Heyns and Arno du Toit. “Nobody really thought it was possible to go from the gun, so we kind of wanted to prove them wrong” Du Toit explained. The initial attack by DSV was followed by the Honingcraft Five duo, Dirkus Coetzee and Alwyn Steenkamp. Behind; Insect Science/Garmin’s Timothy Hammond and Ben Melt Swanepoel worked with William Simpson Cars’ Mike Posthumus and Derrin Smith to ensure the gap between the leaders and the chasing peloton remained at one minute.

Heading into the Baviaanskloof Reserve a puncture for Steenkamp cost Honingcraft Five the chance to contend for victory. This left Heyns and Du Toit alone at the front, but over Baviaans Back the Fangs and MAC the chasing peloton gradual broke apart until Hammond and Swanepoel where pursuing on their own, with Posthumus and Smith also isolated in third on the road. The leading three teams were separated by just four minutes heading into the decisive final 30 kilometres. 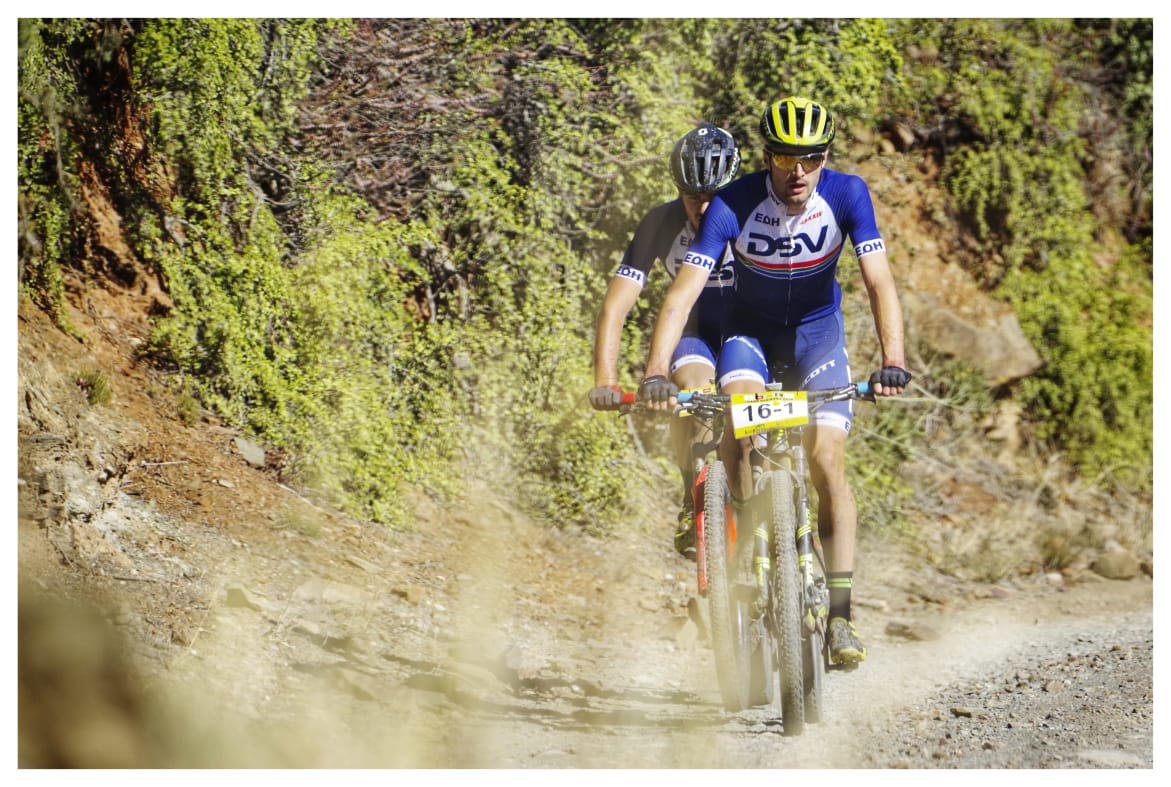 Gert Heyns and Arno du Toit spent nearly 200km in the lead of the Trans Baviaans Race, after a brave attack in the opening kilometres. Photo by Jacques Marais.

Disaster struck for all three the leading teams just after the final check point when they were diverted them from the unmarked Trans Baviaans route onto a permanently marked route in the Zuurbron Bike Park. Hammond and Swanepoel were first to realise that they were off the route and back-tracked, managing to maintain their position ahead of Posthumus and Smith. Heyns and Du Toit however were not as fortunate and ended up losing their lead. Posthumus and Smith also regained the correct route ahead of the DSV pairing. “Everyone got lost in Zuurbron” Posthumus explained. “Then heading home we saw Gert (Heyns) and Arno (du Toit) [riding through] the bush so we waited for them and rode home for them” he elaborated.

Given the nature of the obstruction and the time losses all the teams suffered, the race commissaire adjudged the obstruction in the route to have hindered riders’ ability to determine the correct route and thus awarded the victory jointly to DSV Pro Cycling and Insect Science/Garmin. The unfortunate outcome should not detract from the amazing rides both teams put in however. “They (Heyns and Du Toit) went from the start. It was an incredibly brave ride, I’ve never seen anyone go from the start like that” Hammond praised his rivals, upon crossing the finish line first. 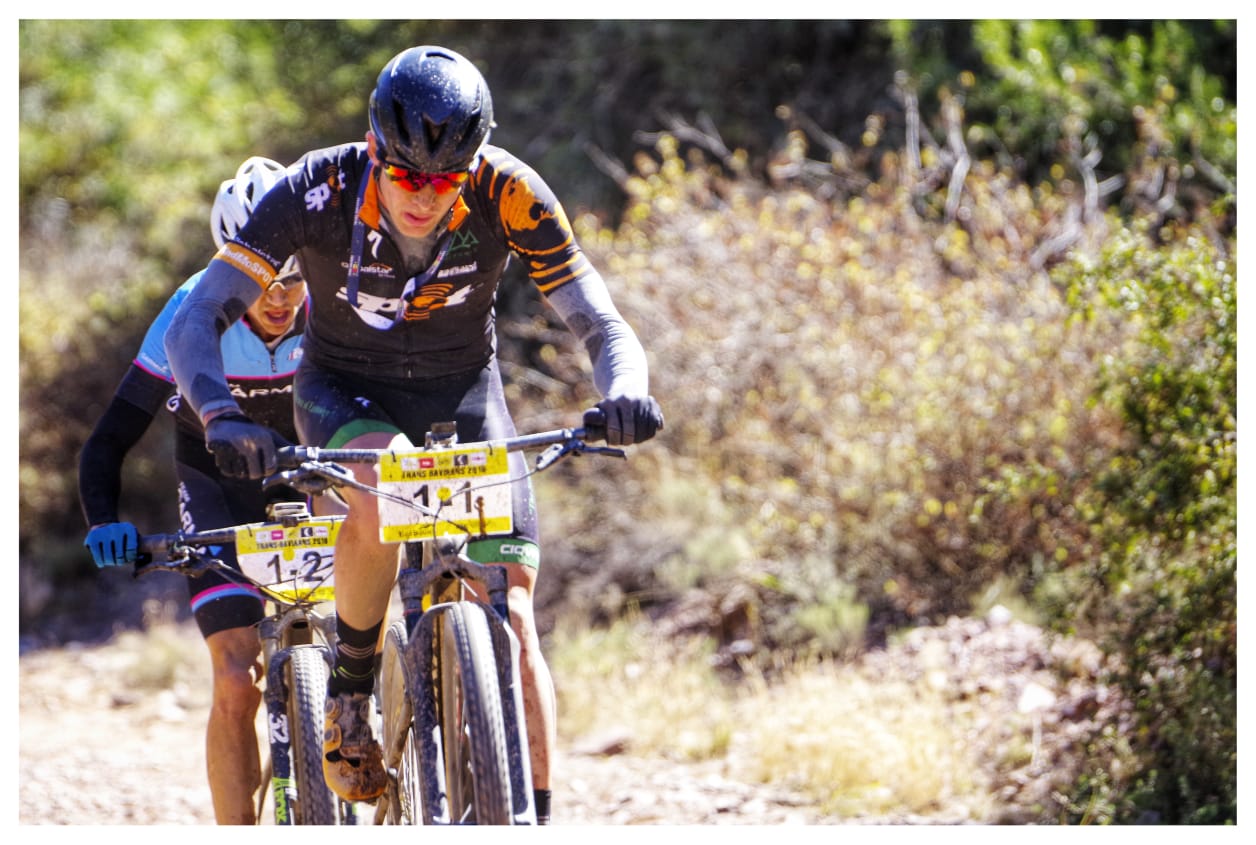 Timothy Hammond leads Ben Melt Swanepoel up the MAC in pursuit of Gert Heyns and Arno du Toit in the 2018 Trans Baviaans Race. The Insect Science/Garmin team past the DSV Pro Cycling riders after confusion leaving Check Point 7, but the teams were awarded the joint victory. Photo by Jacques Marais.

The Insect Science/Garmin combination’s ride was likewise one for the history books; as they kept DSV in sight from the Fangs to the turn off to check point seven. Hammond was the reigning course record holder, for the route which finishes at the Fountains Mall, but he and Swanepoel smashed over twenty five minutes off that time. The pair stopped the clock in an astonishing time of seven hours, fifty one minutes and six seconds – a time which was retrospectively also awarded to Heyns and Du Toit.

The third placed team of Posthumus and Smith crossed the line shortly after Heyns and Du Toit, having gallantly declined to contest the sprint – given their rivals’ loss of time in the confusion after check point seven. The William Simpson Cars’ riders still managed to beat the sun too though, breaking the eight hour mark by three minutes.

The record breaking feats were even more remarkable in the women’s race were Theresa Ralph and Sarah Hill took fifty eight minutes off Ralph and Amy McDougall’s 2016 record time. The Galileo Risk riders rode a flawless race. “Everything went perfectly today” Hill said afterwards. “We always stayed slightly uncomfortable. We agreed on a scale system before the race, and we kept communicating, staying at a level eight” she explained. 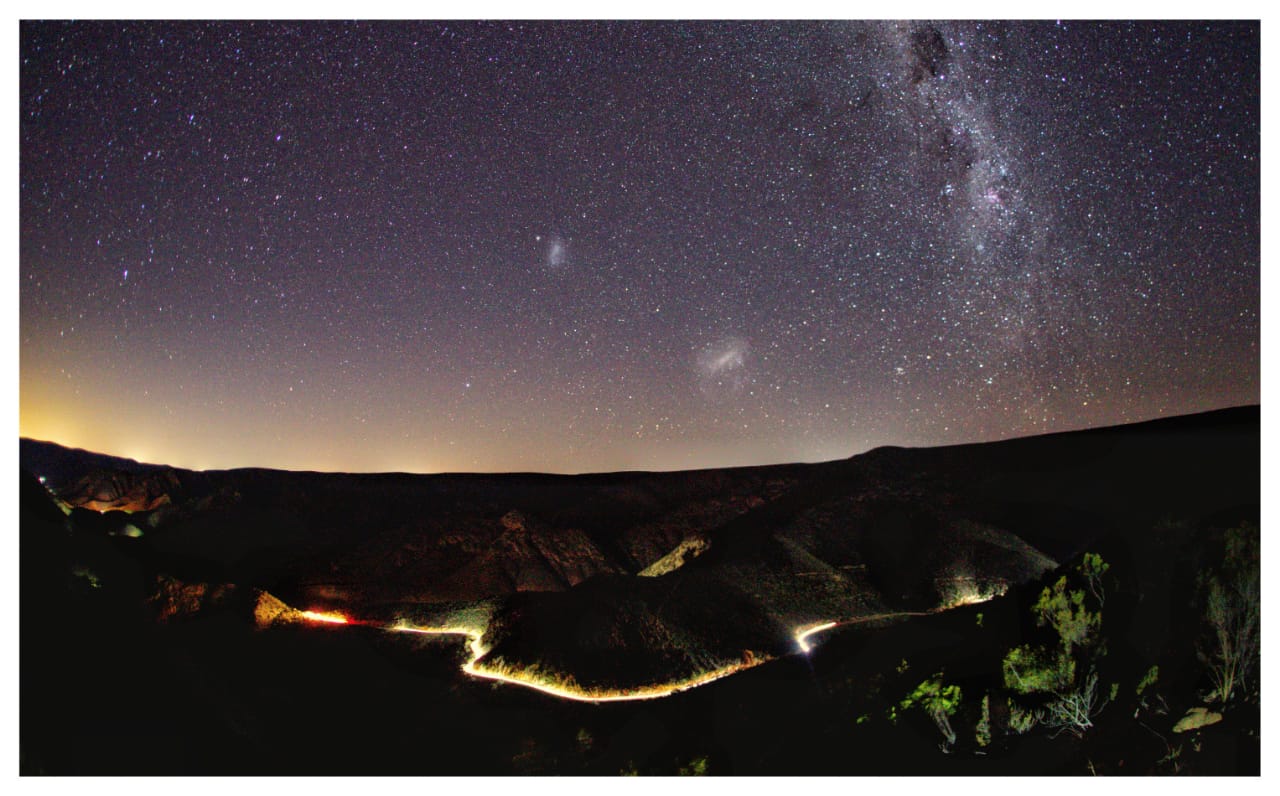 Riding into the night, in the depth of the Baviaanskloof Mega Reserve where light pollution is non-existent, is one of the highlights of the Trans Baviaans for the non-elite riders. Photo by Jacques Marais.

The pair has now defended their Trans Baviaans title as a team while Ralph added a third successive Race victory to her palmarès. They were keen to play up the event to their fellow elite women’s mountain bikers too. “Women’s mountain biking has really picked up in the last couple of years” Ralph started. “And we love the competition between the ladies, and actually we’re all friends. So it would be nice if they could come and join us, we could have a more competitive race and then we could all have a beer together at the end. It would be marvellous if other ladies could come give us some gears” the Galileo Risk champion enthused.

In the mixed category the seemingly undefeatable combination of Yolande de Villiers and Neill Ungerer, riding in the colours of Ultimate Cycling Knysna, continued their undefeated run at the Trans Baviaans. The 2018 Race marks their sixth successive category victory and their second as a two person team, having won the first four with the able assistance of Johan Labuschagne. “I felt like I died seven times out there, especially on the Fangs,” de Villiers half-laughed half-grimaced after securing the victory. “Neill (Ungerer) was a machine out there” she concluded, heaping praise on her partner. The pair’s time of eight hours, twenty three minutes and nineteen seconds was twenty minutes faster than their own previous course record. 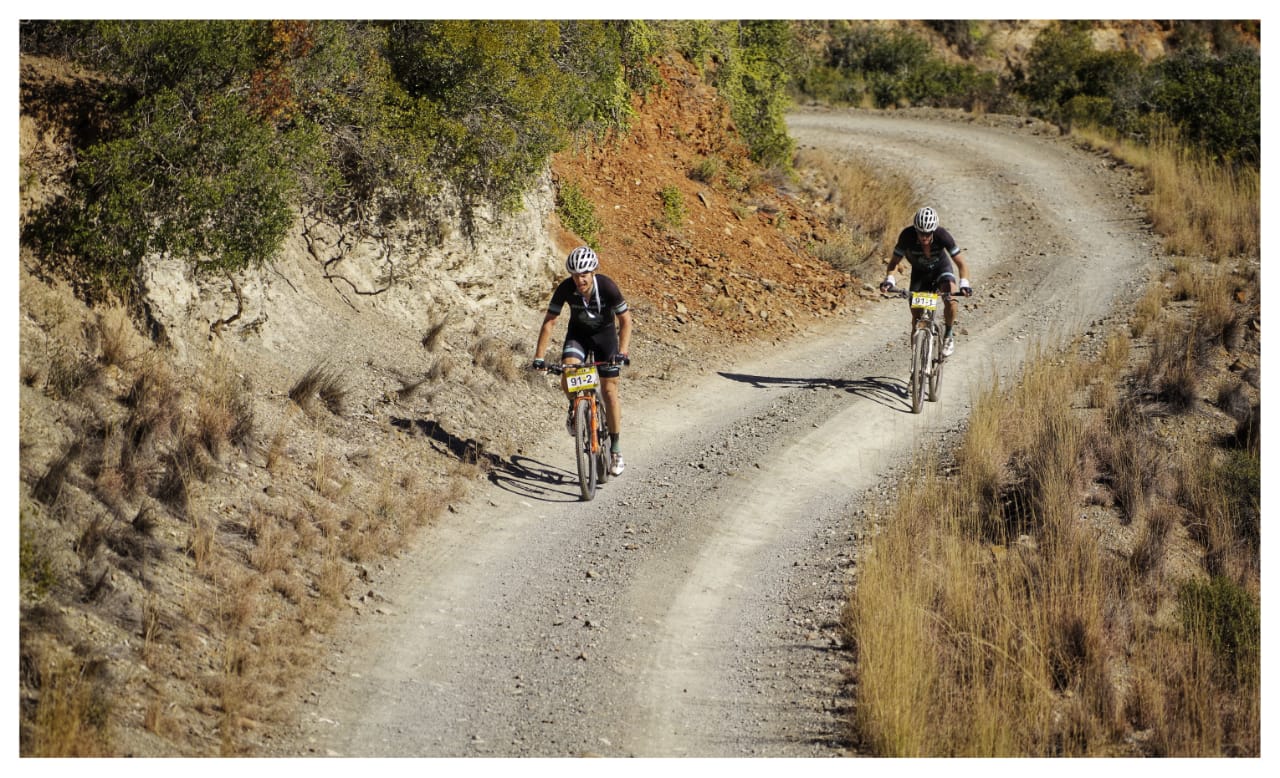 Conquering the MAC, or Mother of All Climbs, is one of the primary psychological obstacles to overcome in the 230km route. Photo by Jacques Marais.

Despite blitzing the course they were not really aware of just how fast their time was until the final phases of the race. “We went through this last little dip, at Mooidraai, and it was still light. I thought: ‘what’s going on here? Did we start earlier’” Ungerer revealed. “It was a long day. But a fast day” he concluded with a smile, clearly ecstatic to be able to put his feet up early ahead of his second attempt at the 230 kilometre long course next weekend – in the Trans Baviaans Repeat. 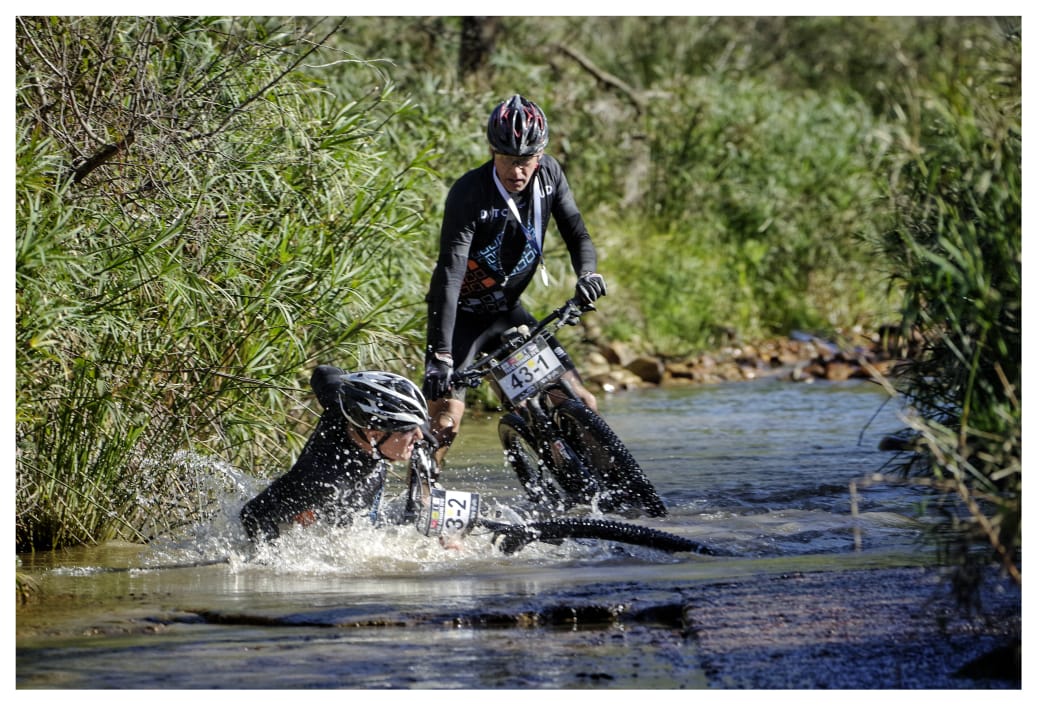 Despite the largely dry conditions there were still a few opportunities to get wet in the 2018 Trans Baviaans Race. Photo by Jacques Marais.

To view the full results from the 2018 Trans Baviaans Race click here. 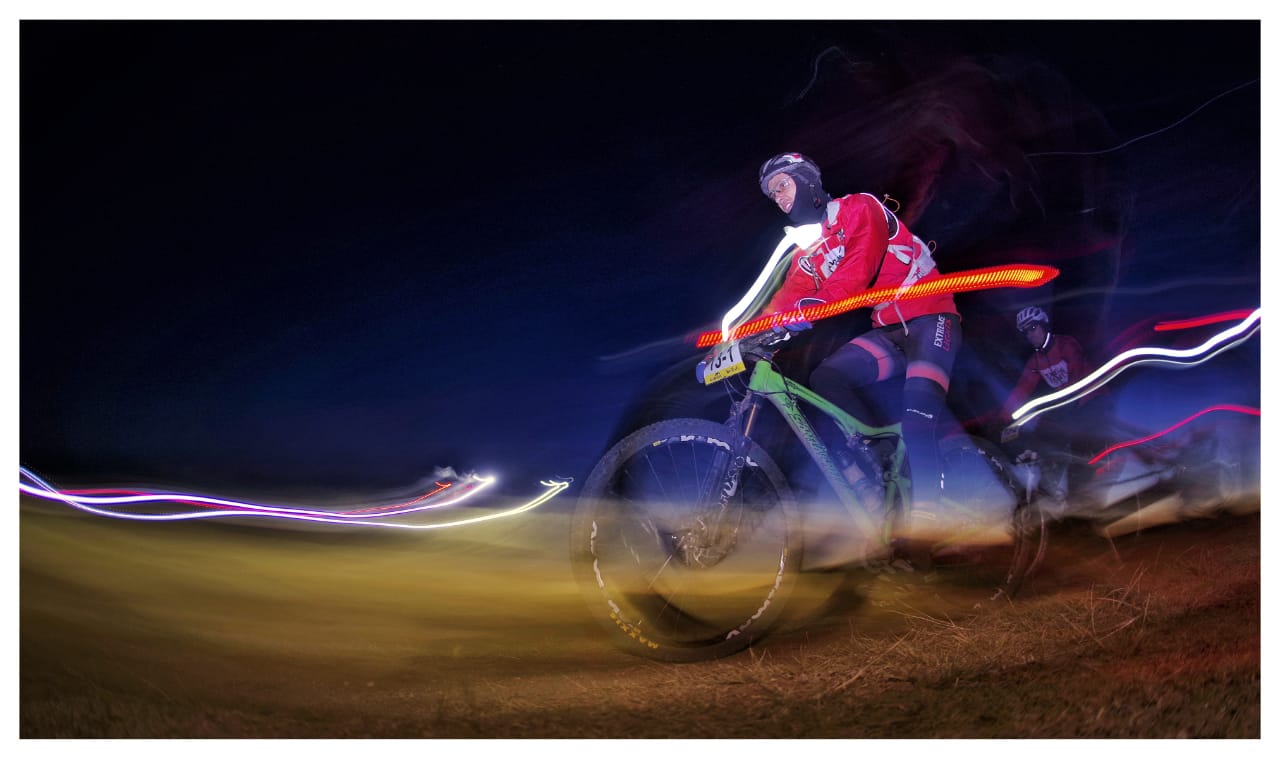