The traditional final race before the Absa Cape Epic, the songo.info Champions Race is set to take place in Kayamandi on Wednesday the 13th of March. This year’s event will once again boast an all-star international field and entry is free to spectators wishing to watch the action unfold live.

The racing gets underway with the Future Champions races, for boys and girls in the Under 14 and Under 18 age groups, at 16h00. The stars of the future will race a shortened version of the Champions Race course, completing as many laps as they can in the fifteen minute slots allocated to each age group. In 2018 the Under 14 boys’ race was won by Luca Wiese, while Andrea Schofman and Silas Valaulta emerged as the winners of the exceptionally competitive Under 18 girls and boys races.

At 17h30 the elite women’s race is set to start. The course for the elite women’s and men’s races starts and finishes on the Kayamandi sports fields; and includes the songo.info BMX and new mountain biking tracks. Headlining the women’s start list are the Absa Cape Epic race favourites Annika Langvad and Anna van der Breggen. Langvad is the defending songo.info Champions Race title holder, having defeated Alessandra Keller last time out. 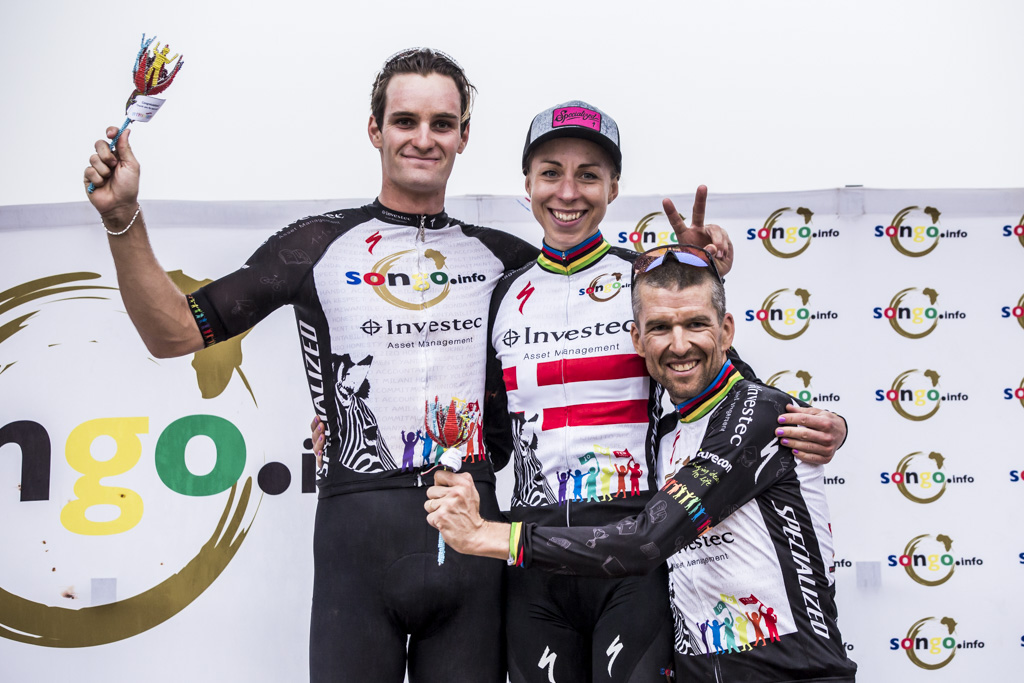 2018 songo.info Champions Race victors, Sam Gaze and Annika Langvad return to defend their titles on the 13th of March 2019. Photo by Ewald Sadie.

As the Dane is once again representing songo.info at the Absa Cape Epic she will be eager to get her time in South Africa off to a winning start, especially as she will be donning the colours of Investec-songo-Specialized. Her closest rival for victory could well be her teammate, Van Der Breggen. The Road World Champion and Olympic gold medallist ran Langvad closest at the Cyprus Sunshine Cup, in February, and will be keen to showcase her comfort on a mountain bike, on the deceptively technical course.

The men’s race, which starts at 18h00, will see the first battle lines being drawn between Investec-songo-Specialized and SCOTT-SRAM for the 2019 season. Defending champion, Sam Gaze, and his Absa Cape Epic partner Jaroslav Kulhavý will be up against their rivals for the following week and the Mountain Biking World Cup season to follow, Nino Schurter and Andri Frischknecht. 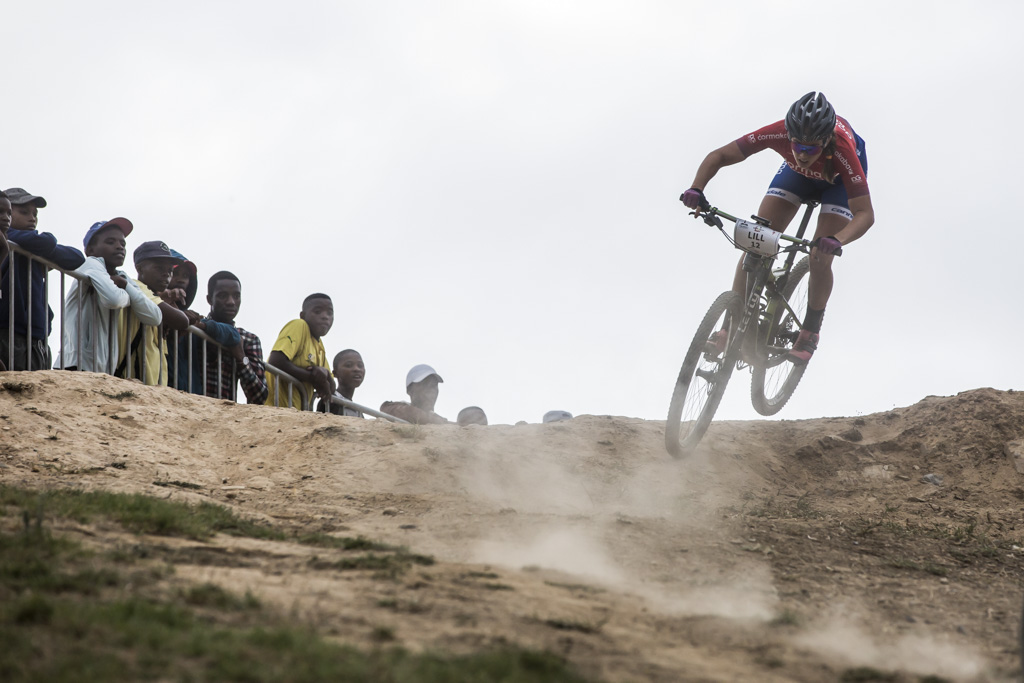 The course for the songo.info Champions Race is deceptively technical and makes for great trail-side spectating. Photo by Ewald Sadie.

Gaze capped his successful South African racing trip in 2018 with victory at the event. This year the New Zealander has already notched up a win, at the Cape Town Cycle Tour on Sunday, and is looking to continue that streak through the songo.info Champions Race and the Absa Cape Epic. Kulhavý is also a previous winner of the race and will be highly motivated to win on his custom, songo.info inspired, Specialized S-Works Epic.

The bikes ridden by Langvad and Kulhavý at the songo.info Champions Race and in the Absa Cape Epic will once again be auctioned to raise funds for the Stellenbosch based sporting and education charity. Christoph Sauser, co-founder of songo.info, will also be pinning a race number to his bike as he warms-up for the Absa Cape Epic. His partner, Simon Andreassen, is set to make his third appearance in the event; meanwhile SCOTT-SRAM’s Lars Forster makes his debut. 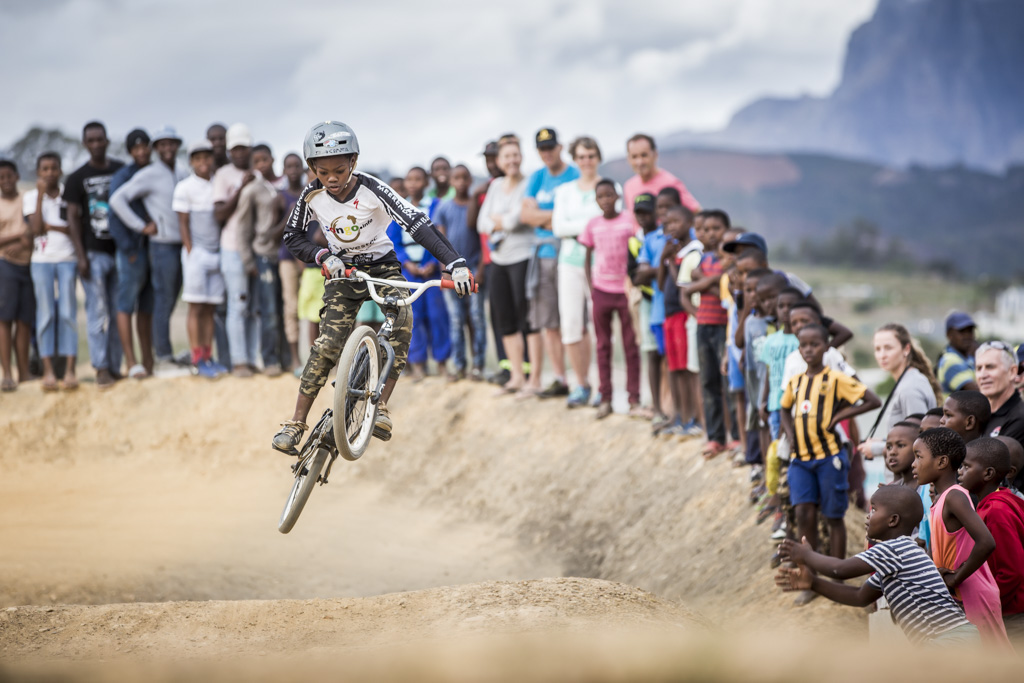 The songo.info Champions Race also features a BMX exhibition race for the children in the songo.info programme. Photo by Ewald Sadie.

The Investec-songo-Specialized and SCOTT-SRAM riders will face fierce competition from a number of other world class riders in the 2019 songo.info Champions Race. Foremost of the challengers are the Centurion-Vaude pairing of Daniel Geismayr (fourth in 2018) and Jochen Käss. Andreassen’s fellow Dane, Sebastian Fini is a dark horse for the title. Also in contention are Manuel Pliem, David Schöggl, Vinzent Dorn, Tristan de Lange, Benjamin and Sascha Weil, Matthew Keyser and Jarrod van den Heever. While Oliver Munnik will no doubt seek to entertain the crowds in the only high intensity event the former full time rider still races at full gas.

The racing starts at 16h00, while registration opens for the junior races – which all Under 14 and Under 18 age group riders are eligible to enter – at 15h00. Entry is free for spectators and secure parking will be available on the Kayamandi Sport Field (Google Maps Location). If you cannot attend in person you will be able to follow the action live on Twitter, @songoinfo, and recap on the highlights on the charity’s Facebook page, songo.info. For more information and directions to the venue please visit www.songo.info. 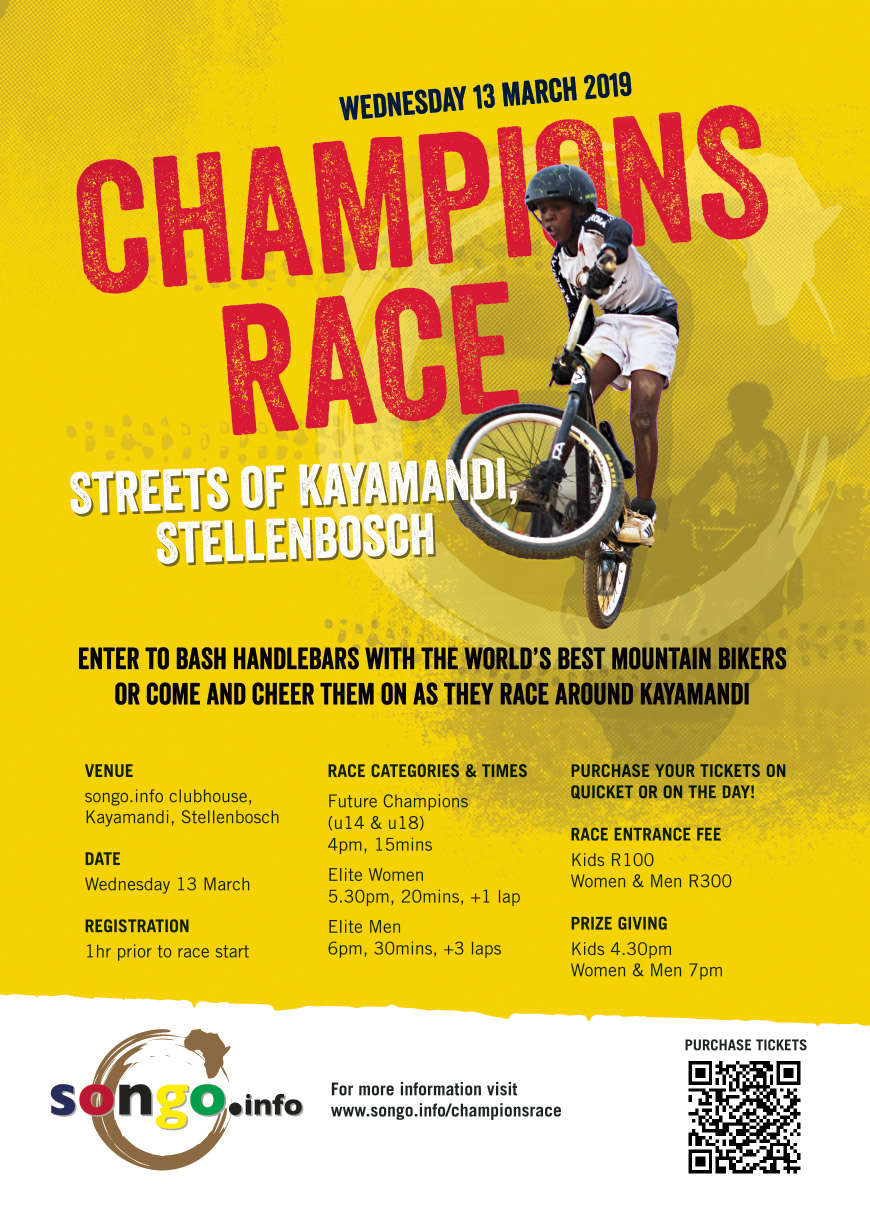 Click on the image to find out more about the songo.info Champions Race.