Icy To Hell and Back

Icy To Hell and Back

Gamkaskloof, or Die Hel, is renowned for extremely hot days. Though the mercury climbed past the 35-degree Celsius mark during the day on the first day, of the twenty fifth To Hell and Back mountain bike stage race, the prevailing memory of the 2019 event will be of the cold. Cold and, in the case of the fastest riders, a bit of drizzle and a lot of mist.

Tony Thornburn, one of only two riders to have ridden every event since its inception in 1995, rated it as one of the toughest editions ever. “That was the coldest I’ve ever been in Die Hel” Thornburn recounted. The cold did however not dampen the rider’s spirits as they rode into and out of Gamkaskloof; on Saturday the 16th and Sunday 17th of November. 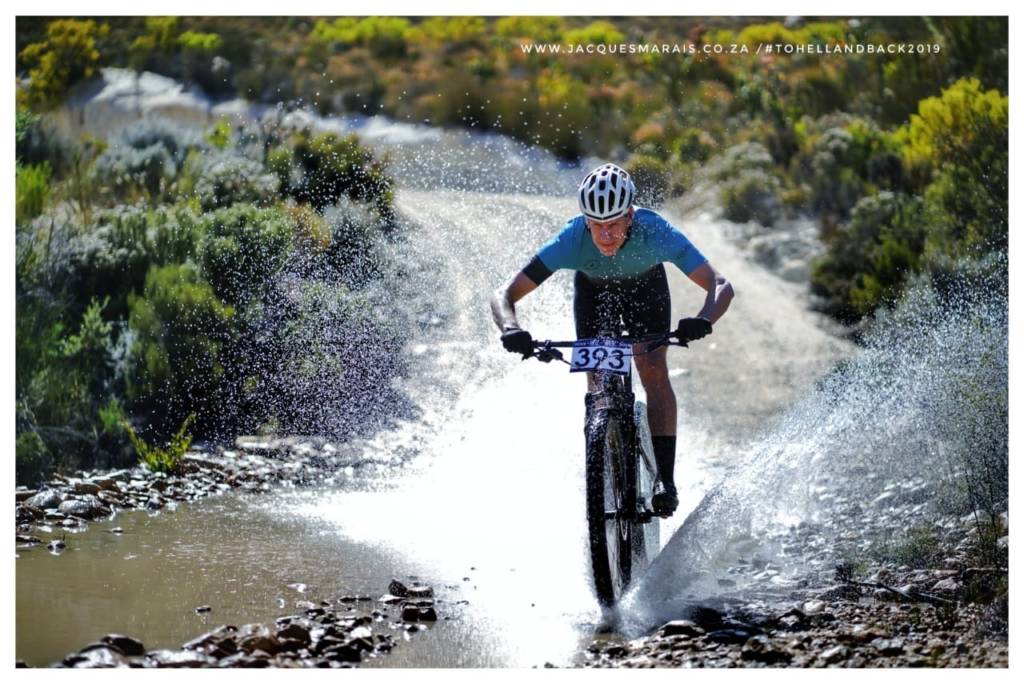 Decent late season rains ensured that there were river crossings aplenty on the road to Hell. Photo by Jacques Marais.

With roaring fires, laid on by Safari Braai Products, and entertainment in the form of songs, accompanied by an acoustic guitar, the mood in Die Hel never faltered. In fact, the event became a celebration of life, providing riders and their family members who made the trek into the kloof with the chance to reflect – uninterrupted by the outside world – on the things they hold dearest. The sad passing of Old Nick’s Club members, Dirk Joubert and Harold Basson, in the lead up to the race, necessitated a moment of silence at the start.

Basson rode 21 editions of To Hell and Back over the years, while Joubert had completed 12. The latter’s blue number board, with “138” and “Dirk Joubert” embossed on it, was proudly pinned to her bike by Joubert’s wife Leandri. That spirit of celebrating life, by doing the things one loves best, was the resounding message of the event. 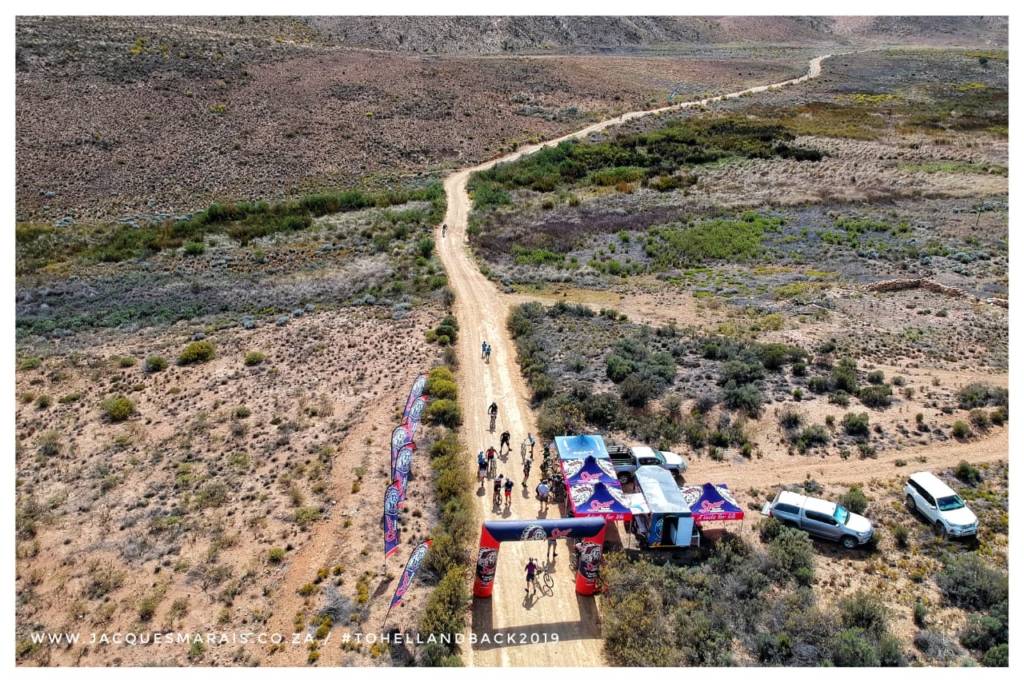 The famous Spur water point once again provided much-needed nourishment, in the form of burgers and chips, to fuel riders for the climbs into and out of Gamkaskloof. Photo by Jacques Marais.

While the majority of the riders cruised through the Swartberg Mountains, soaking up the race’s unique atmosphere and spectacular views, at the sharp end the racing was fiercely contested. For the racers more, of To Hell and Back’s nutrition partner’s, GU’s products were consumed than those of the event’s beer sponsors’ Darling Brew. There simply was not enough time for them to stop, at the summit of Heartbreak Hill for beers.

The opening day, during which the route takes riders from the De Hoek Mountain Resort to Gamkaskloof, was won by Bobby Behan. To do so the Irish former triathlete had to solo back to the lead group, after a crash in the first 10 kilometres of the race. He then utilised the technical skills he has honed on his Stellenbosch home trails to descend away from the group and create a 1 minute 17 second buffer.

A thick and icy mist descended on the Swartberg Pass, during the final stage of the 2019 To Hell and Back mountain bike race, making it the coldest edition of the 25-year-old event yet. Photo by Jacques Marais.

Day 2 saw Behan outclassed by another former triathlete, Regis Maniora. The forty-year-old from Luxembourg managed to distance the overnight leader early in the race back from Gamkaskloof to De Hoek. In so doing he overhauled Behan’s advantage and claimed the stage and overall honours, in a total time of 5 hours, 38 minutes and 25 seconds.

The women’s race was equally exciting. Catherine Hind dominated the opening stage, winning it by 7 minutes and 30 seconds, but could only finish third on the final day. Day 1’s second place finisher Talita Botha fared better, she managed to limit her time losses to Stage 2 winner Ilse Nel to secure the overall title. Botha’s combined time for the two days was 7 hours, 31 minutes and 28 seconds. 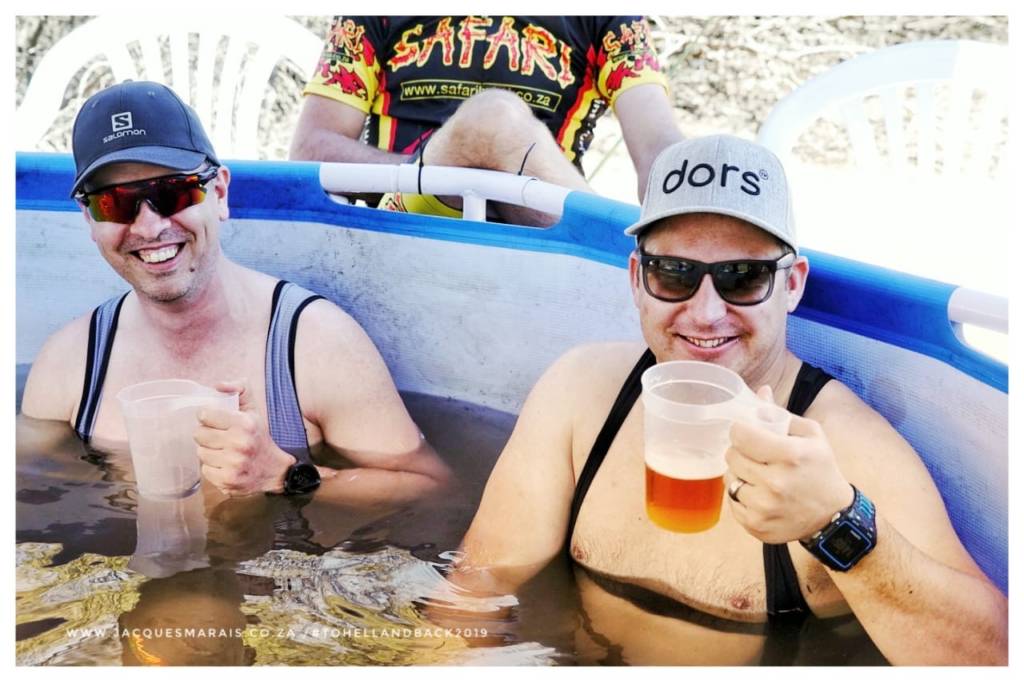 Meanwhile, the riders who took their time and enjoyed the surroundings were rewarded by the weather gods too. Those who rushed on Day 2 were subjected to wet final 30 kilometres after the heavens opened in a chilly downpour. Roughly 25 riders were caught by the cloud break, which was localised to a section of road between the famous Spur water point, where warming burgers and chips were hungrily consumed, and the turn off to the Swartberg Pass. The Pass itself, was enshrouded in mist.

As with most southern mountain slopes in South Africa the Swartberg receives more precipitation on its slopes which face towards the coast. On the second day of To Hell and Back this phenomenon resulted in unseasonal, but not entirely unusual, fog banking up against the range. A thick mist enshrouded the Swartberg Pass descent, back to De Hoek, and provided a strangely eerie finale to the weekend. From sweltering in the inflatable pools after riding into Die Hel riders we subjected to a icy descent after riding out of it. 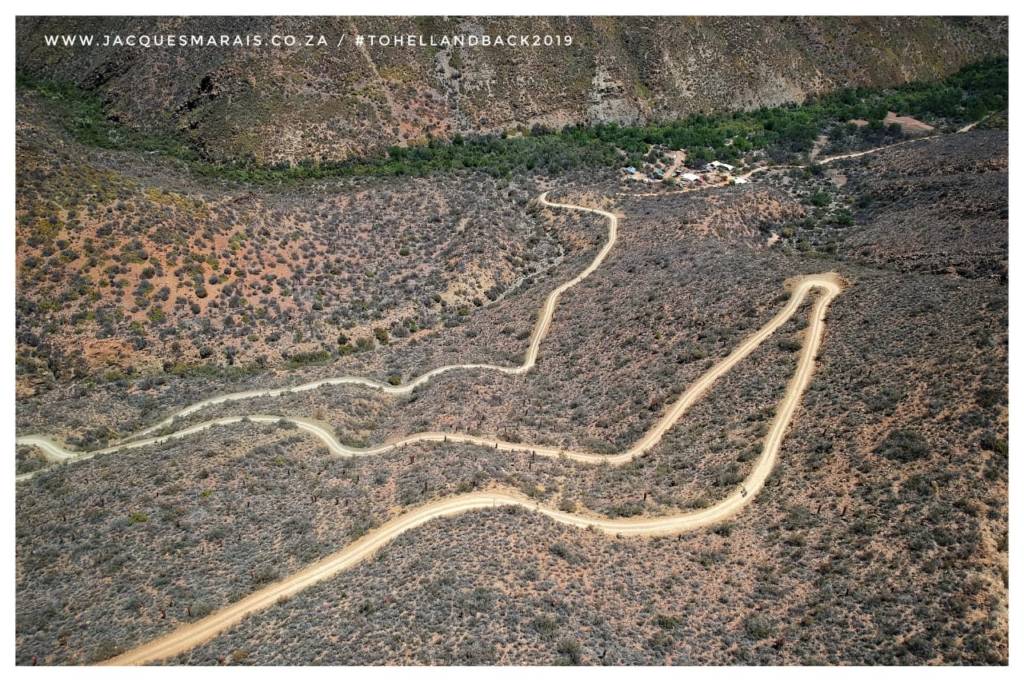 In Die Hel the temperatures were significantly warmer, with the mercury cresting 35-degrees-Celcuis. Photo by Jacques Marais.

25 years is a long time and in the course of all those editions of To Hell and Back the race has endured some memorable weather conditions. The challenging conditions ensured by the atypical weather make those years more memorable however. In 5- or 10-years’ time the members of the Old Nick’s Club will no doubt be sitting in Die Hel reminiscing, over a Darling Brew, about the coldest To Hell and Back they experienced. The 2019 race will be remembered fondly then, though right now the riders may need a day or two to warm up still.

It is fortunate then that entries to the 2020 race, which takes place on the 14th and 15th of November, only open on the 1st of June 2020. Which leaves ample time for the minds of mountain bikers to work their usual tricks. Turning the tough into Type 2 fun, the reason we ride. 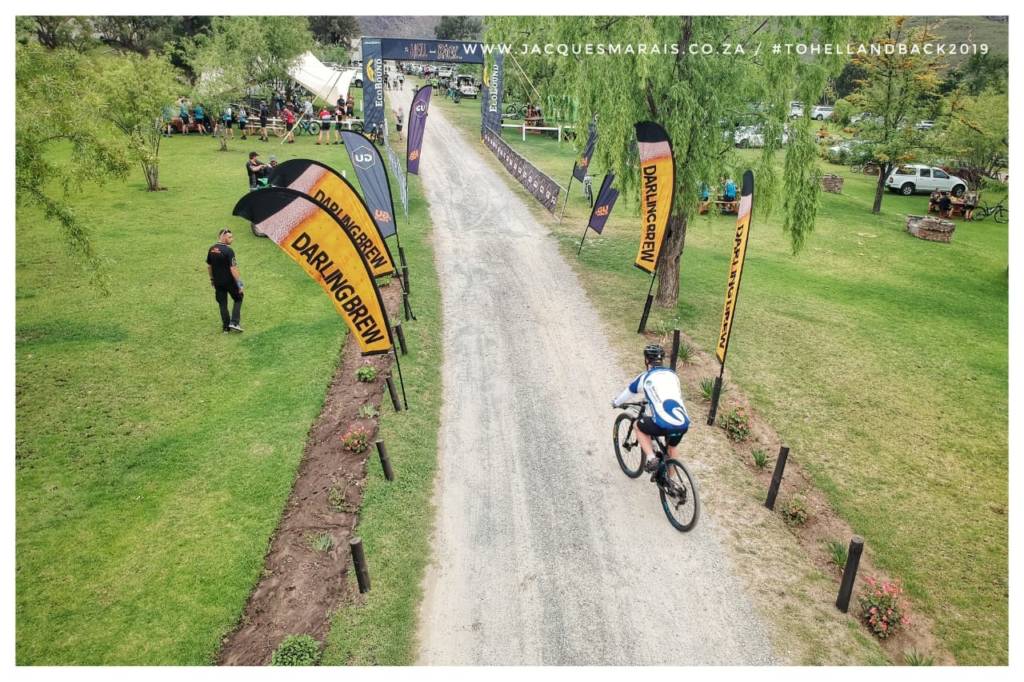 The finish line, at De Hoek Mountain Resort, was a welcome sight after the cold descent of the Swartberg Pass. Photo by Jacques Marais.