CST Get the Tankwa Trek off to a Perfect Start

CST Get the Tankwa Trek off to a Perfect Start

The CST PostNL Bafang team, of Sebastian Fini and David Nordemann, and the Faces CST squad of Mariske Strauss and Candice Lill stormed to victory on the opening stage of the Momentum Medical Scheme Tankwa Trek presented by Biogen. The 24-kilometre-long Stage 1 took place on Thursday, 6 February 2020, and started at 15:00 in the afternoon. Despite the late start the conditions were virtually perfect for mountain bike racing, with a fresh breeze keeping the mercury in the mid-20s.

Mechanicals, punctures and crashes impacted both the UCI men’s and women’s races. The primary victims were the Cannondale Factory Racing team of Manuel Fumic and Henrique Avancini. Fumic’s front wheel kicked a rock up which destroyed his chainring and his hopes of winning the stage. “I’ve never seen anything like it before” Avancini confessed. “The chainring nearly broke of the crank from a rock hitting it and there was no way to fix it on the trail. Manny [Fumic] had to run and I had to tow him to the finish. Now we reset and use the rest of the race as training. Hopefully we can help Maxime [Marotte] and Grant [Ferguson] over the next three days.” 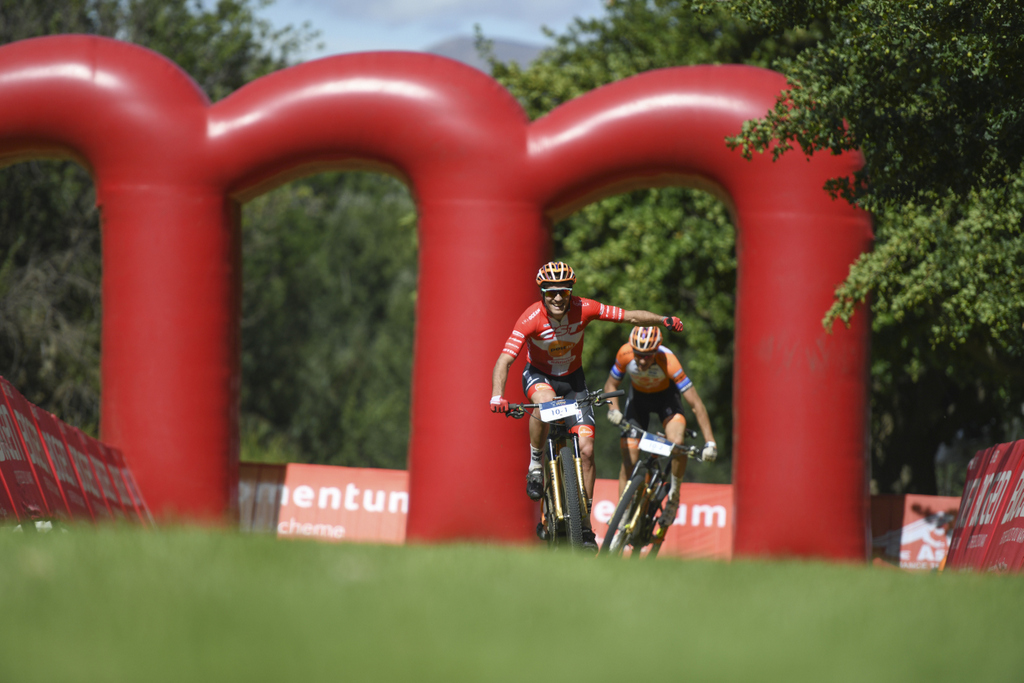 Fumic and Avancini’s loss was Fini and Nordemann’s gain. The young cross-country racers had escaped off the front with Cannondale Factory Racing and were able to capitalise on Fumic’s mechanical. Once they were in the lead they pushed on towards the finish, even a crash by Nordemann 6 kilometres from the finish could not derail their charge to victory.

“I saw Fumic struggling with his chain and then we just pushed full gas” Fini related. “Sebastien was so strong, I just tried to hold his wheel” Nordemann. “The trails here are amazing, but are kind of sketchy in places too. You have to really be careful. I pushed a bit to hard and caught my handlebar on a bush and went over the bars 6 kilometres from the finish. Fortunately, I was able to get up, straighten my bars and we could still win the stage.”

CST PostNL Bafang crossed the finish line, at Kaleo Manor, in a time of 54 minutes and 14 seconds. They were followed in by the Cannondale Factory Racing 2 pair of Marotte and Ferguson, 35 seconds later. The third team on the stage was the surprise package of Tristan de Lange and Alexander Miller. The young Namibians will start Stage 2 just 42 seconds behind the race leaders. 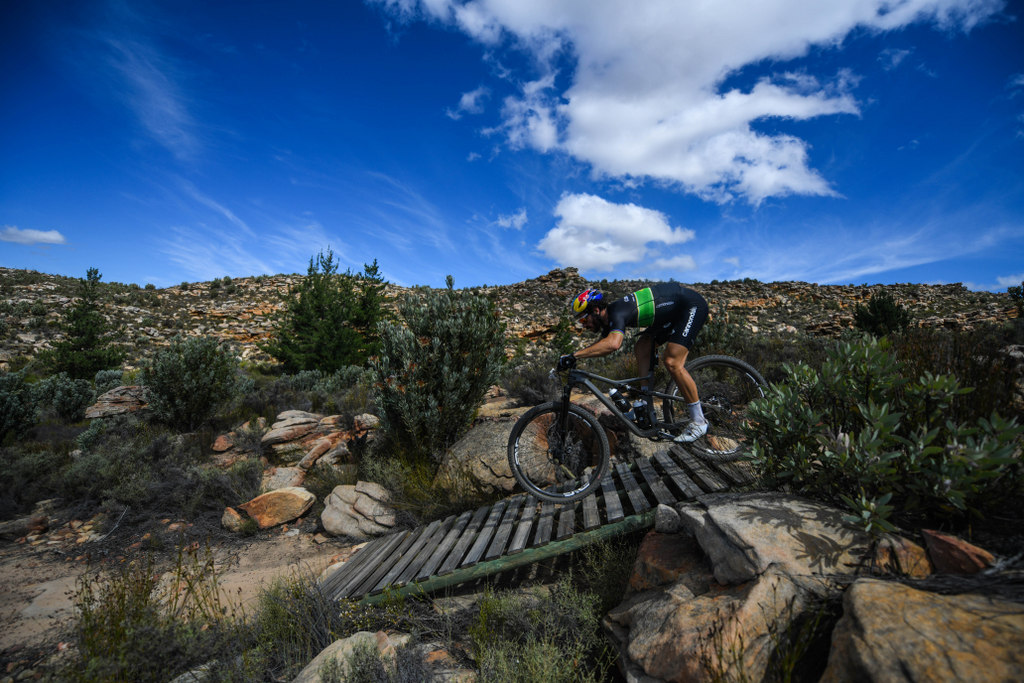 Cannondale Factory Racing’s Henrique Avancini was unable to prove his form as misfortune intervened for him and his partner, Manuel Fumic. Photo by ZC Marketing Consulting.

In the UCI women’s race Strauss and Lill lead from start to finish. Initially the Fairtree team of Jennie Stenerhag and Nadine Rieder followed the Faces CST squad’s pace. On the stage’s most significant climb the leading teams had established a healthy buffer, but that would not last for Fairtree. 8 kilometres from the finish Rieder experienced her first puncture during a mountain bike race.

“I had my first ever puncture while racing my mountain bike today” Rieder exclaimed. “I’ve been worried about it for years, but at least it’s out of the way now. After Jennie [Stenerhag] plugged it I crashed twice, once because of the low pressure in the back wheel and then when I clipped a tree branch with my handlebar.” “I know from last year that anything can happen in the Momentum Medical Scheme Tankwa Trek presented by Biogen” Stenerhag philosophised. “Last year we were 4 minutes down after Stage 1 and still won overall. It is so easy to make a mistake here and lose lots of time. Hopefully we got that out of the way today.”

For Strauss and Lill the stage was drama-free. The pair looked untroubled in their first start as a partnership and matched each-other strength-for-strength. “I kind of knew Mariske [Strauss] and I would race well together” Lill said. “But to have it proven gives us a lot of confidence for the rest of the race.” 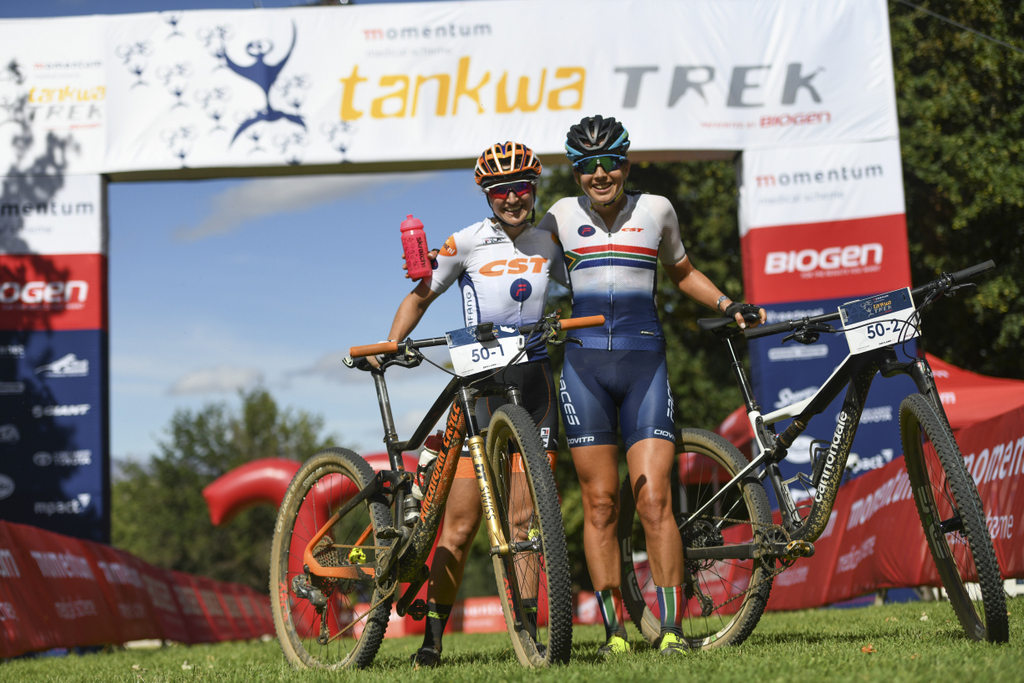 Candice Lill and Mariske Strauss kicked off their partnership with a stage victory on Day 1 of the Momentum Medical Scheme Tankwa Trek presented by Biogen. Photo by ZC Marketing Consulting.

Taking confidence into the long stages ahead could be vital. “The race only really starts tomorrow” Strauss stated. “Having the leaders jerseys on our shoulders gives us a chance to race tactically and not take undue risks.” The chasing UCI women’s pack will have to take risks to put Faces CST under pressure.

Ghost Factory Racing are perfectly placed to do so on Stage 2. Barbara Benko and Anne Terpstra were second on the opening stage, having overtaken Fairtree after Reider’s first crash. They lie 1 minute and 18 seconds behind the race leaders. Stenerhag and Rieder are a further 8 seconds back, with dormakaba blue’s Robyn de Groot and Adelheid Morath just off the podium in fourth.

Stage 2, which loops into the Witzenberg Valley, features 84 challenging kilometres of mountain biking. The singletrack-packed stage takes in 1 900 metres of climbing and though many riders fear the Merino Monster, on Stage 3, Stage 2 is arguably the toughest day of the race. Mountain biking fans can follow the action, as it unfolds on the race’s Twitter handle, from 06:30: @tankwatrek. 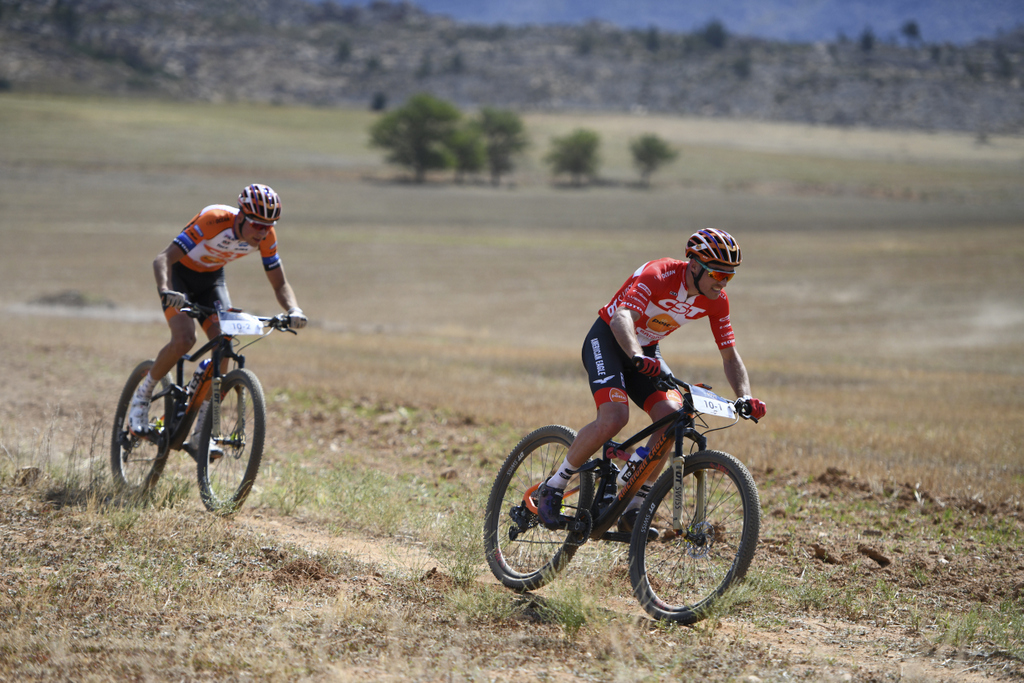