The Momentum Medical Scheme Tankwa Trek presented by Biogen saved the best for last. Both in terms of the trails and the result for the champions, the Bulls Heroes and Faces CST. The men’s yellow jersey wearers further secured their grip on the First Ascent leaders’ jerseys by racing to third on the day; behind their support team and the stage winners, Cannondale Factory Racing. While the women’s race winners secured victory the hard way, winning the stage in fine fashion.

Mariske Strauss and Candice Lill started the day 37 seconds behind the overnight leaders, Jennie Stenerhag and Nadine Rieder. The Faces CST team thus had to go on the offensive early on. After pushing the pace in the first singletrack they made the race winning break in the famous Houdenbek trails. 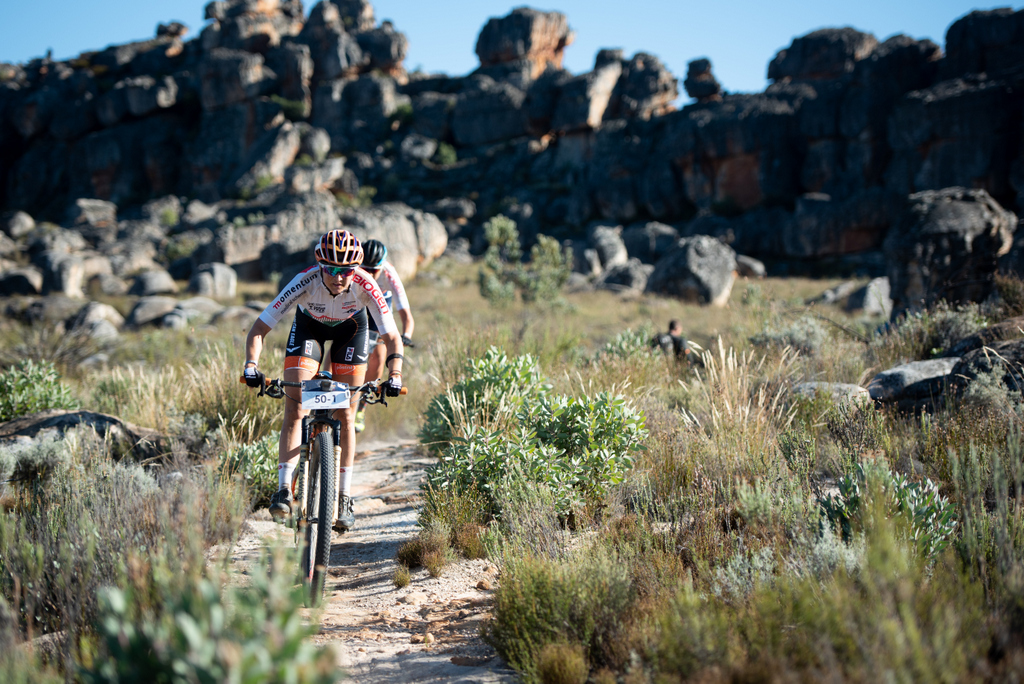 “We pushed hard to get into the Houdenbek singletracks first” Lill explained. “Then we could control the pace and rely upon our cross-country punch and skills to get a gap on the rest of the women’s field. At the second water point Darren [Lill] told us we had a 50 second lead. The next time we saw him it was two minutes. But we just kept pushing, because I remembered puncturing in the last 10 kilometres of the stage, here, in 2018.”

Faces CST’s stage win – in a time of 3 hours, 25 minutes and 32 seconds – was enough to secure them the overall victory by 2 minutes and 14 seconds. “Taking the win is really important” Lill continued. “It secures us both a good few UCI points which will help towards our Olympic qualification bid. Part of the plan behind Mariske [Strauss] and myself teaming up was to work towards securing two Olympic slots for South Africa.” 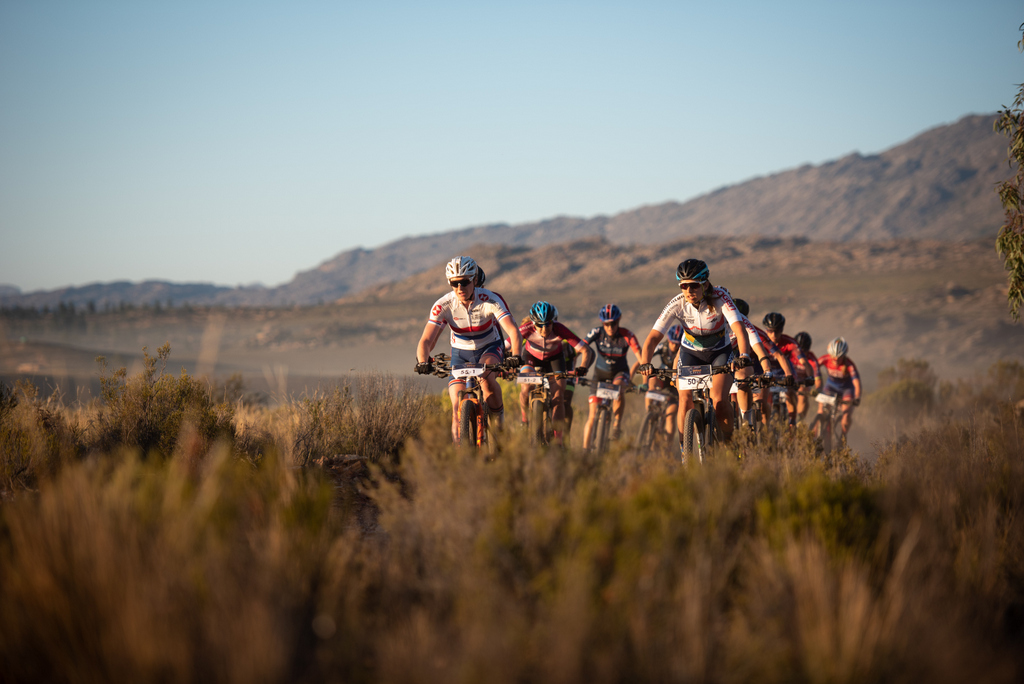 Jennie Stenerhag and Nadine Rieder had to be content with second position on the stage and on the final general classification standings. They would reflect on untimely punctures, which ultimately cost them dearly on Stages 1 and 3. “Mariske and Candice were the strongest riders today” Stenerhag graciously allowed. “They are deserved winners.”

Robyn de Groot and Adelheid Morath finished third on the stage and rounded out the final overall podium. “Once we saw that we could not catch Faces CST or Fairtree, today, we slacked off” De Groot recounted. “The season is long and while we learnt a lot from the Momentum Medical Scheme Tankwa Trek presented by Biogen we recognised that our energy could be better spent later in the year.” 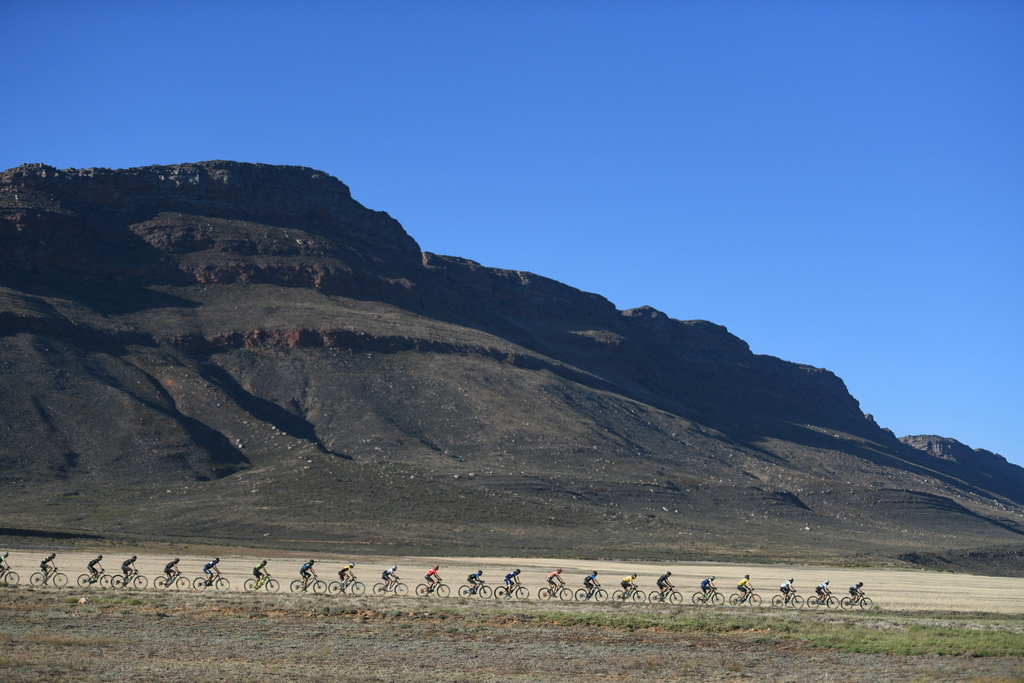 The UCI men’s field makes their way across a dam wall on Stage 3 of the Momentum Medical Scheme Tanwka Trek presented by Biogen. Photo by ZC Marketing Consulting.

In the UCI men’s race, as on Stage 3, there were two battles unfolding simultaneously. The first was for the stage honours. Which were claimed, in dominant fashion by Cannondale Factory Racing’s Manuel Fumic and Henrique Avancini. The German/Brazilian combination blitzed the course in a time of 3 hours and 26 seconds.

The second was for the overall title. That battle once again featured a strong supporting cast performance from the Bulls Youngsters. Martin Frey and Simon Schneller were able to hold Urs Huber and Simon Stiebjahn’s wheels when the Bulls Heroes attacked. Working together the quartet were never at risk of being caught once they had distanced the CST PostNL Bafang team, of Sebastian Fini and David Nordemann. 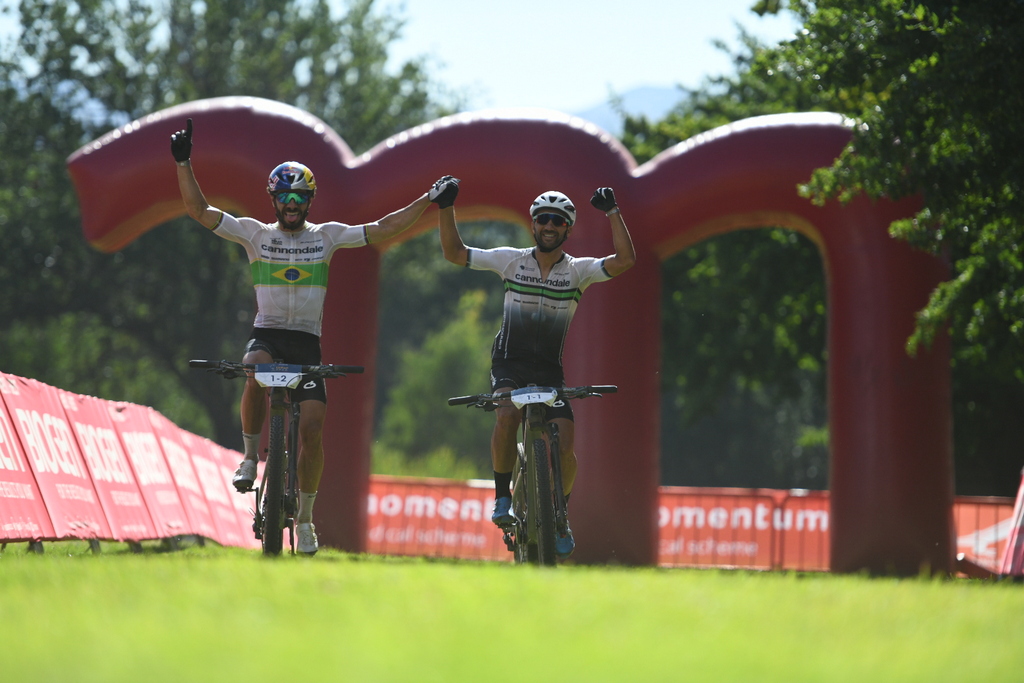 Henrique Avancini and Manuel Fumic won the final stage to end their race on a high, for Cannondale Factory Racing. Photo by ZC Marketing Consulting.

“Two minutes is not a big advantage” Huber conceded. “So, we decided to race the final stage as if it was any other. It is better to attack than to defend. We were able to get away from CST PostNL Bafang on a climb in the Houdenbek singletracks. The Youngsters were able to come with us and really helped in the sections between the singletracks.”

“It was great crossing the line with them too” Huber added, reflecting on finishing alongside Stiebjahn, Schneller and Frey. “For the whole team it was a fantastic moment. It is great to start the season with a win and it will give us lots of confidence for the races to come.”

Finishing third on the stage – but ahead of Fini and Nordemann, who finished fifth – was enough to extend the Bulls Heroes’ margin of victory to 3 minutes and 32 seconds. CST PostNL Bafang retained their second place overall. While Tristan de Lange, who survived a horror crash on the final stage, completed the overall podium alongside Alexander Miller, for DANSTE/Megatech. 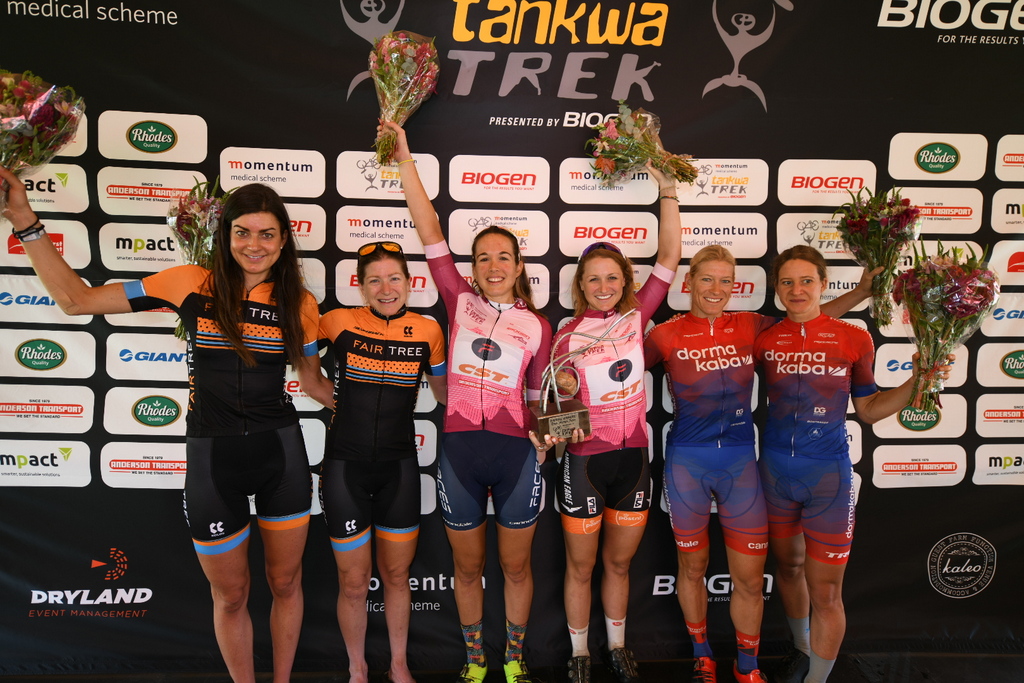 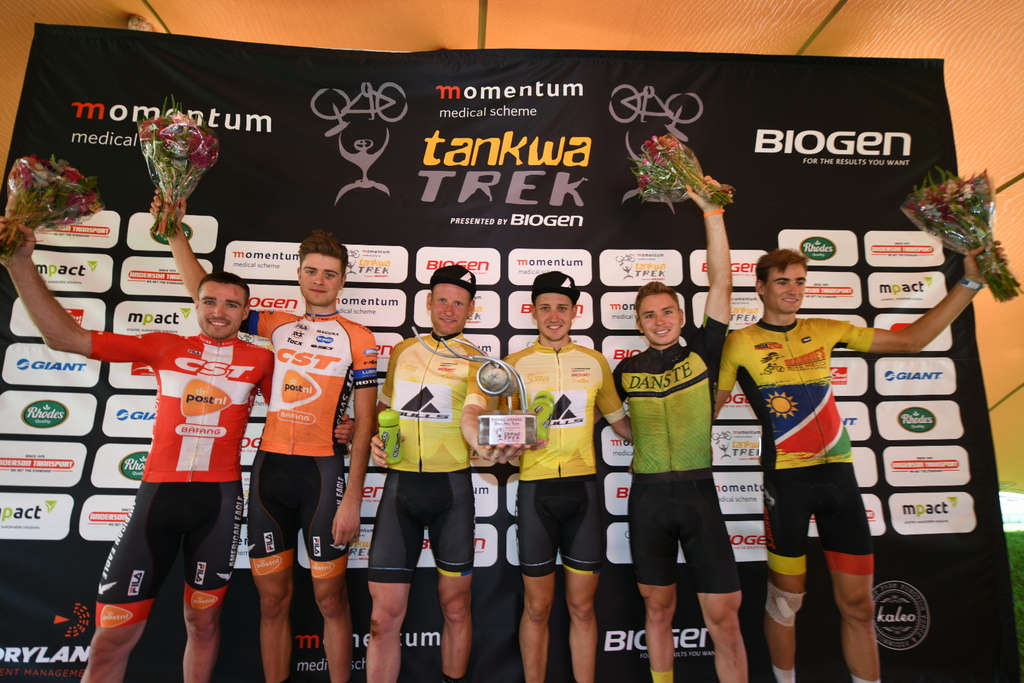 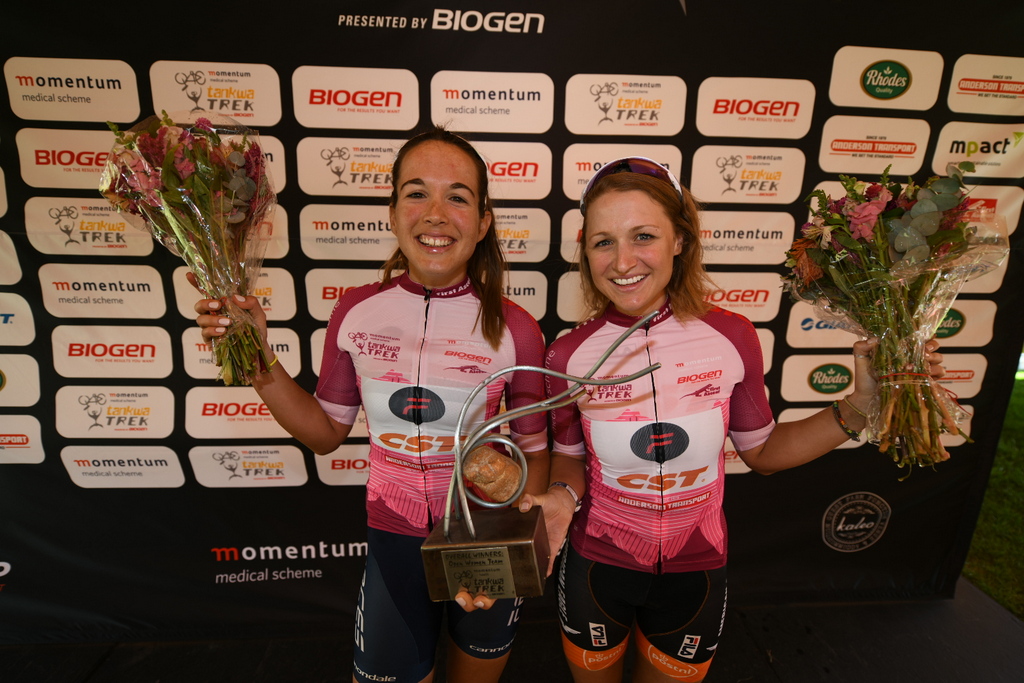 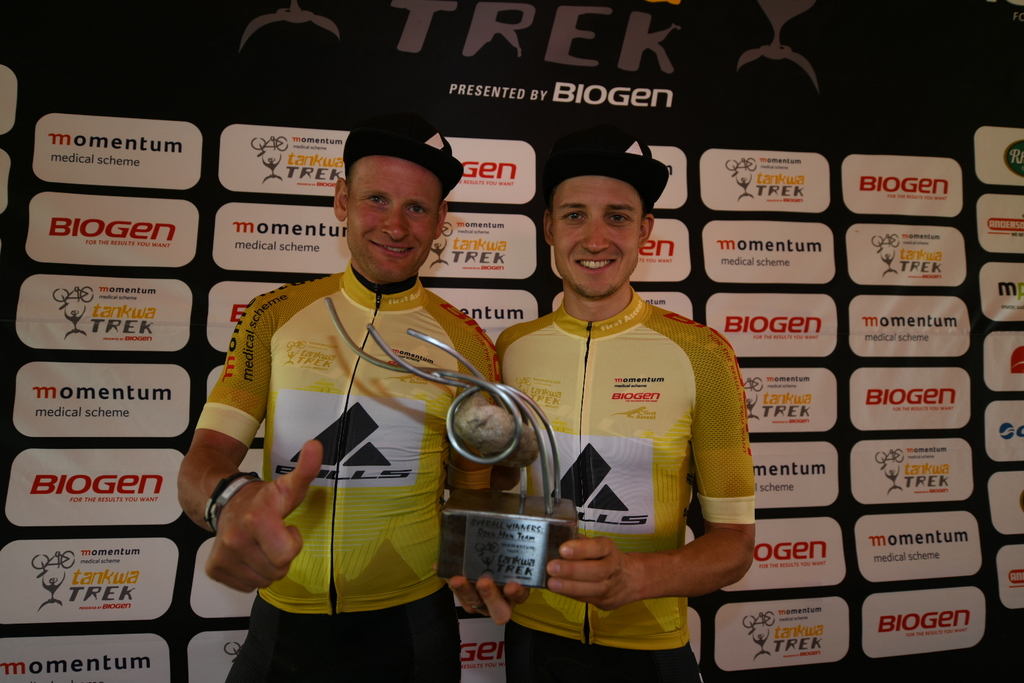 Urs Huber and Simon Stiebjahn, of the Bulls Heroes celebrate with the men’s trophy. Photo by ZC Marketing Consulting.