On Wednesday the 11th of March the Kayamandi Sports Fields and songo.info BMX track hosted the 2020 songo.info Champions’ Race. Germany’s Nadine Rieder and South African, cross-country champion, Alan Hatherly raced to commanding victories. They and their fellow competitors feats serve to inspire not only the children in the songo.info programme, but also the hundreds of other children who came to spectate.

The race is one of the sporting and education charity’s flagship annual events. It brings some of the world’s best mountain bikers and the accompanying media attention to the township. Not only highlighting the work songo.info does, in the process, but also showcasing how much more there remains to be done. 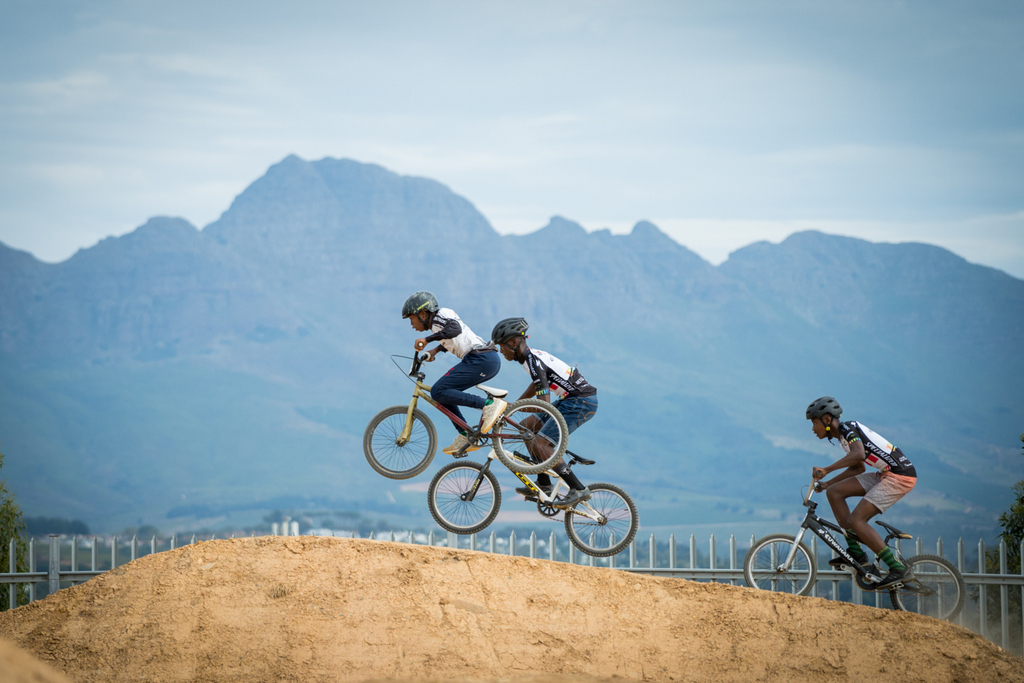 The songo.info kids showcased their BMX skills before the elite men’s and women’s races took place. Photo by Mark Sampson.

Before the elite riders took to the course the songo.info kids got the opportunity to showcase their BMX skills. They raced around the track, staging fun races and doing spectacular jump runs; launching into the clear Stellenbosch skies from the track’s dirt jumps. After 45 minutes of entertaining BMX action it was time for the elite women’s race.

Rieder, who placed second behind Anna van der Breggen, in 2019 was up against a collection of strong riders, including Sina Frei; of Ghost Factory Racing. They were joined on the start line by Lia Schrievers, Danielle Strydom and Marianne Bergli, amongst others. The class of Rieder, Frei and Schrievers meant that they were always the most likely main protagonists though. 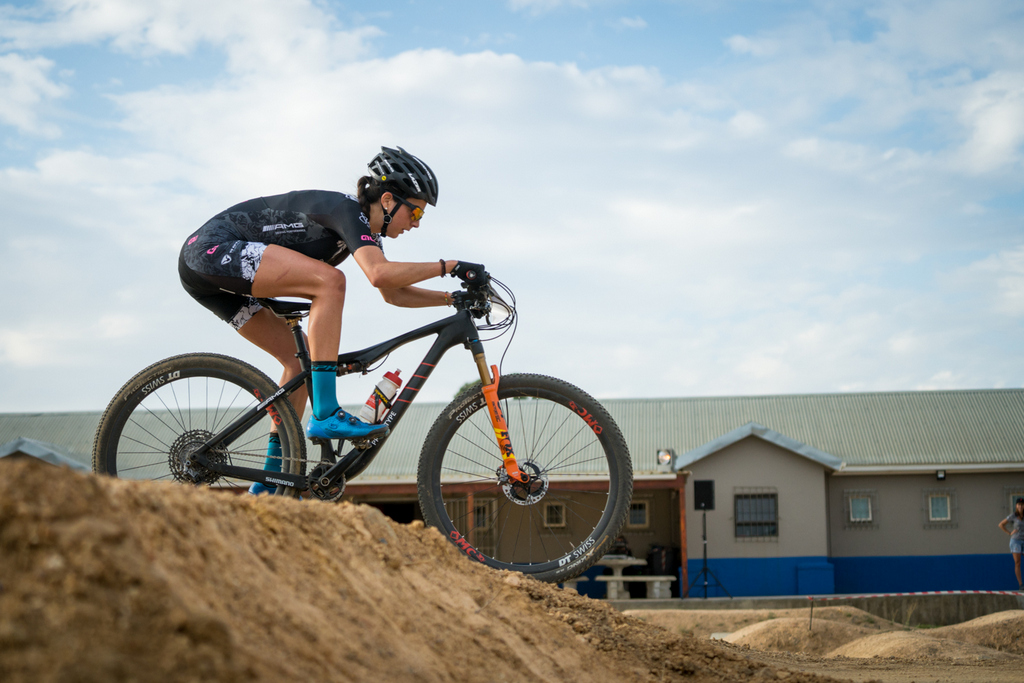 Rieder showcased the fine form, ahead of the Absa Cape Epic, as she rode to a dominant victory. Photo by Mark Sampson.

The diminutive Swiss star and under 23 world champion set the early pace, dragging Rieder and Schrievers away from the rest of the field. Initially Strydom was able to follow too, but by the end of the first lap the pace was telling on the young Trek Bikes rider. For two laps the trio forged on, with Frei stetting the pace. Then on lap three Rieder attacked on the Alpe d’Huez of Kayamandi. The climb, named after the famous climb of the Tour de France, is the major feature of the songo.info Champions’ Race route. It ascends form the Kayamandi Sport Fields to the clubhouse grounds and features a savagely steep left-handed switchback turn near the summit.

Frei and Schrievers were unable to match Rieders’ effort and the German rode away to victory over the remaining two and a half laps. “After the winter and after the Momentum Medical Scheme Tankwa Trek, presented by Biogen, I’m happy that my shape is good” the winner said; looking ahead to the Absa Cape Epic. “I was super excited to race today, because I wanted to test my form in a race. But to be honest I didn’t expect it to be that easy to get a gap in the middle of the race. When I got the advantage, on the technical uphill; I thought ‘okay now I go.’ And that was nice. I think it was a good leg opener for the Absa Cape Epic.” 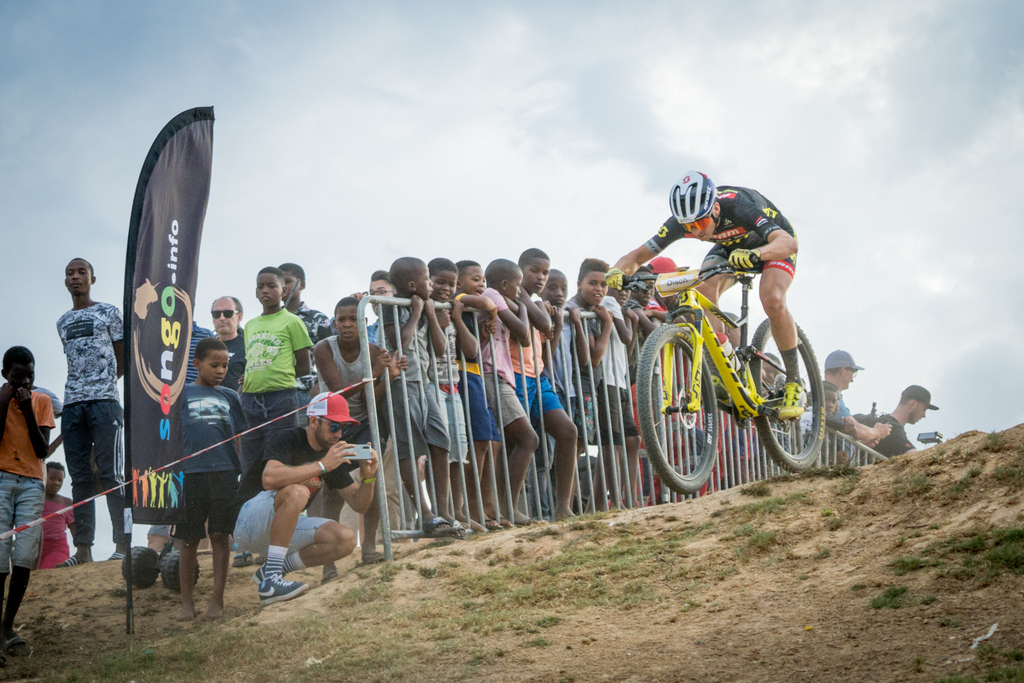 The children of Kayamandi created a raucous atmosphere for the songo.info Champions’ Race. Photo by Mark Sampson.

Schrievers raced to second behind Rieder. The German’s result was a popular one with the young fans. She has been volunteering at songo.info over the last two months and as a result has become well-known to the charity’s young beneficiaries. Frei had to be content with third.

The men’s race followed a similar format, though there were more protagonists in the early stages; before Hatherly’s winning move on the Alpe d’Huez of Kayamandi. The South African was joined on the start line by Konny Looser, Florian Chenaux, Gert Heyns, Howard Grotts, Tom Pidcock, Jaroslav Kulhavý, Florian Vogel, Tristan de Lange and the founder of songo.info Christoph Sauser; amongst others. Keagan Bontekoning was the fastest rider off the start line, leading the field up the Alpe for the first time. When his young legs began to faulter Looser took over the pace making duties. 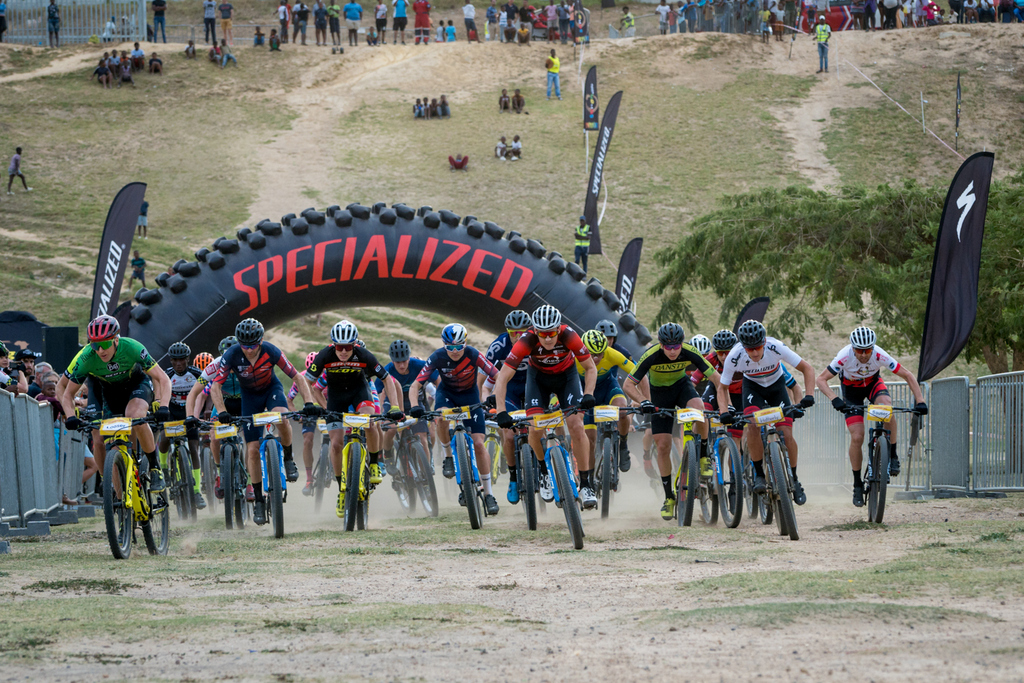 The elite men’s race featured some of the world’s best mountain bikers. Photo by Mark Sampson.

The BUFF SCOTT rider was shadowed by SCOTT SRAM’s Chenaux, with a cluster of Specialized riders just behind the Swiss pair. On lap three, of six, Hatherly made his move. Initially Chenaux could match the Specialized rider, but Hatherly put in a second acceleration which distanced Chenaux too. The SCOTT SRAM rider then faded through the field, as Grotts and Pidcock raced to second and third.

“I tried the same thing last year” Hatherly explained of his winning move. “But this year I managed to avoid any rogue pieces of glass and the puncture which ended my race in 2019. I’m super happy with my form. I’m focusing on cross-country racing this year; so, I’m skipping the Absa Cape Epic. But it was still great to race here and test my legs.” 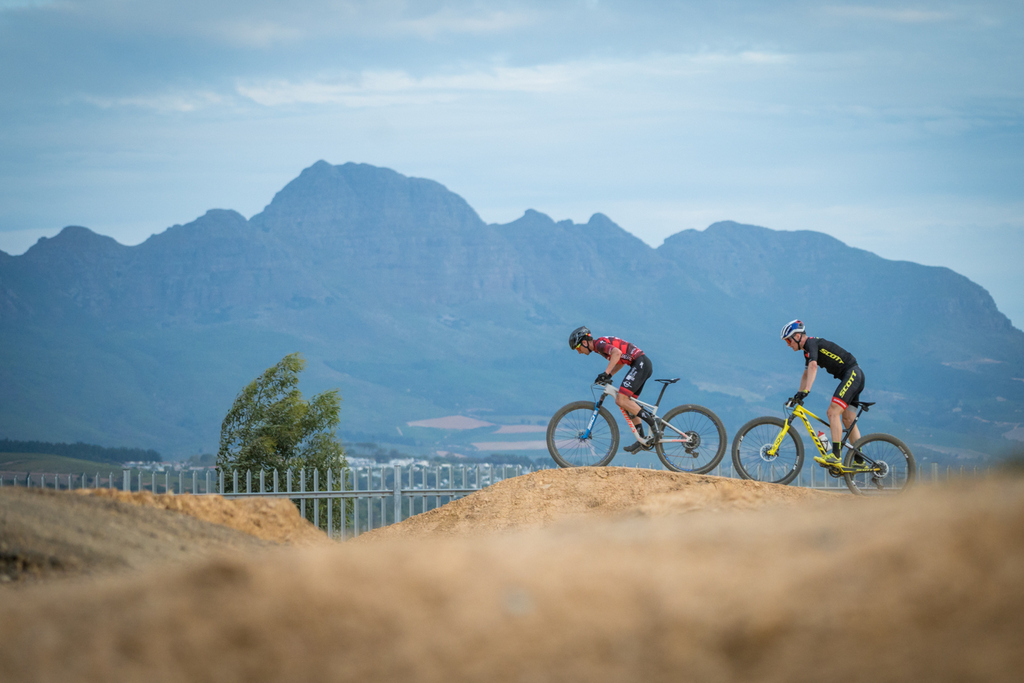 Located on the outskirts of Stellenbosch the songo.info clubhouse features a BMX track with a spectacular view of the Winelands mountains. Photo by Mark Sampson.

Mountain biking fans can view more photos from the songo.info Champions’ Race, and follow the fortunes of the Ninety One-songo-Specialized teams at the Absa Cape Epic, on the charity’s social media handles. To do so follow @songoinfo on Twitter, and @songoinfo on Instagram; in addition to liking the songo.info Facebook page. For more information about the programme and the work they do in Kayamandi visit: www.songo.info.

Located on the outskirts of Stellenbosch the songo.info clubhouse features a BMX track with a spectacular view of the Winelands mountains. Photo by Mark Sampson.