Watkinson and Trautman Swim and Run to Torpedo Cape Victory

Watkinson and Trautman Swim and Run to Torpedo Cape Victory

Two of South Africa’s premier triathletes, Annah Watkinson and Matt Trautman, strayed far from their usual road racing roots to take part in the Torpedo SwimRun Cape by OUTsurance, on Sunday. The pair showed their class in the swim and run legs, as well as overcame the unusual elements of navigating kelp beds and rock jumps, to claim the overall victory. Racing in the mixed category they were the fastest team across the 16-kilometre course, holding off the leading men’s team of Nic Anema and Ryan Ball.

Near perfect conditions greeted the athletes taking part in the fifth edition of the Torpedo Cape, Torpedo SwimRun presented by OUTsurance’s flagship event. As the sun rose it was clear the Mother City would be showing off her Autumnal best. Hardly a breath of wind moved the trail-side trees, while the usually icy Atlantic was as close to warm as it realistically gets. Only a slightly larger than ideal swell provided any cause for concern, but it was still within the event’s safety parameters and all 6 swims were retained.

The route, from Sandy Bay to Clifton Fourth Beach, included 6 swims and 6 runs. With the aquatic legs totalling 4-kilometres and the terrestrial 12-kilometres. En route there were 3 aid stations, fuelled by Red Bull, PowerBar and Bootlegger Coffee Company. It was in the water that Watkinson and Trautman first opened up their lead. Though they were able, once they had snapped the elastic to the chasing pack to continually eke out seconds on each leg of the race. 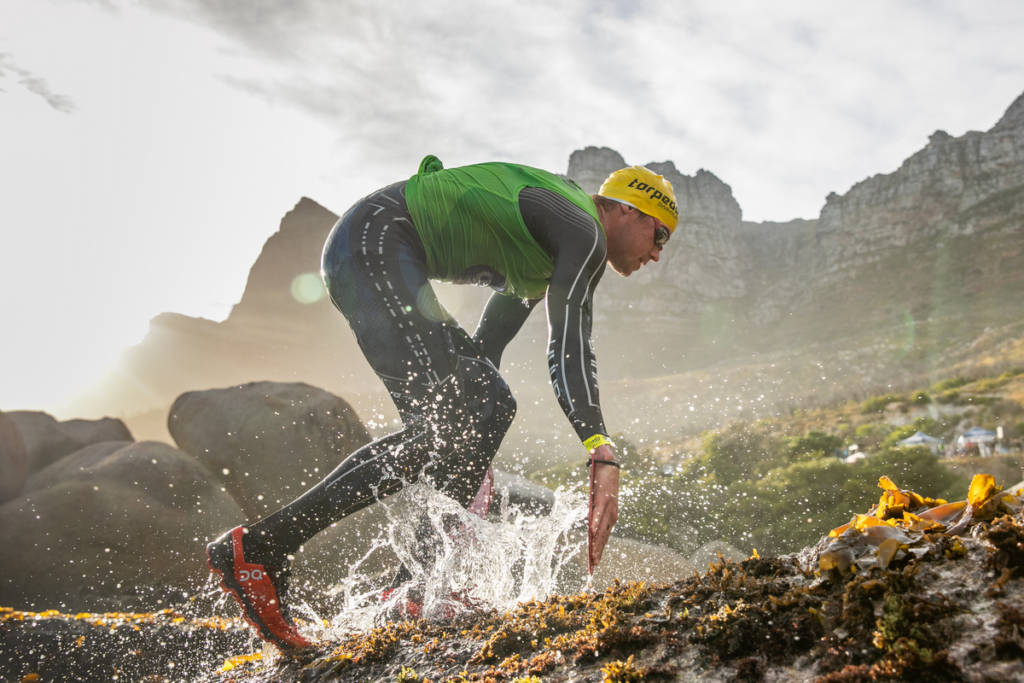 Matt Trautman, out of his usual element scrambling through kelp and over rocks, on his way to Torpedo Cape victory. Photo by Caleb Bjergfelt.

To keep the field compact the teams self-allocate themselves into start groups, with purple, green or yellow swim caps identifying the slower, medium-paced and fastest athletes. Starting last, the racing yellow caps initially have to make their way through slower traffic. This can be a benefit however as it removes the need to spot swim exits, allowing the stronger swimmers to leapfrog from group to group rather than blazing their own trail.

Watkinson and Trautman played that game perfectly, exiting the first two swims in the lead. They did however have the defending men’s champions, Riaan Shaw and Dylan Pivo, right on their heels. As well as Anema and Ball. The challenging climb from Llandudno beach to Victoria Road, followed by the sweeping run down to the next swim allowed the leaders to exert their dominance.

The longest swim of the race, from Oudekraal to Cosy Bay, saw Watkinson and Trautman take complete control of the race. Such was their advantage that struggling through the rockpools and boulders at the exit of the swim hardly dented their lead. The hardest swims completed the pair were able to cruise through the final kilometres, running and swimming with metronomic efficiency. They crossed the line in 2 hours, 8 minutes and 13 seconds to win by 4 minutes and 30 seconds.

“The race was tough, chasing after Matt all day” Watkinson laughed on the finish line. “I’ve been training quite hard for the upcoming races, so this was a great day out. The organisation was awesome, the route was wonderful and it was an all-round beautiful day. I must also thank Nicole [Trautman], for letting Matt race with me on her birthday.” 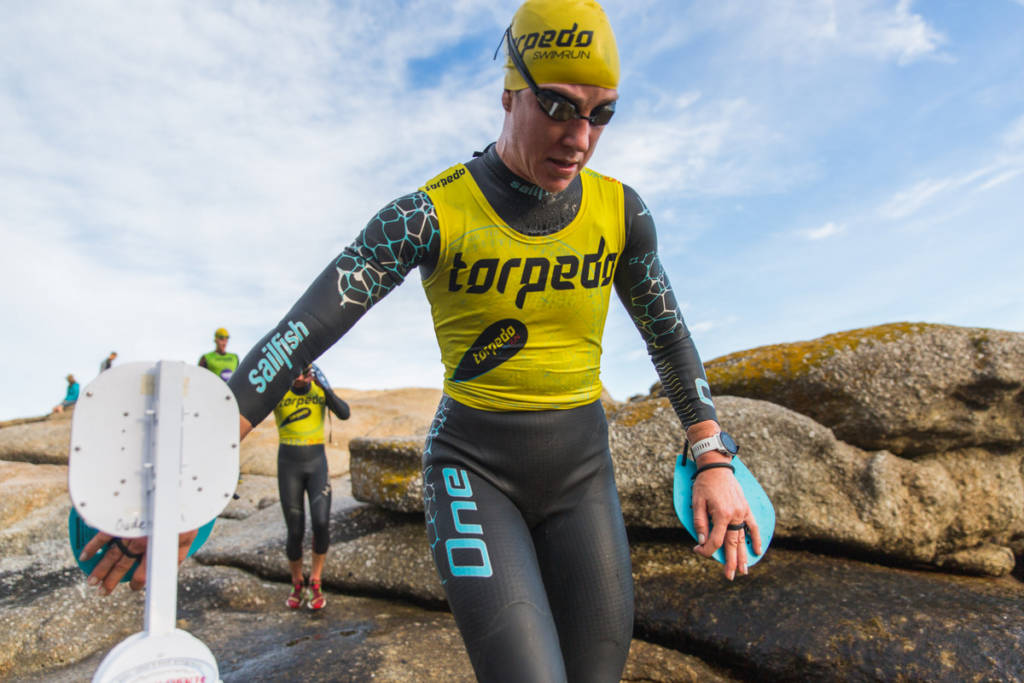 Annah Watkinson after the first swim, while the cashing pack was still hot on her and Matt Trautman’s heels. Photo by Johann Minnaar/Threshold Photography.

“It was a lot of fun. Just a really cool day out” Trautman added, echoing his partner’s enthusiasm. “It’s very different from what I’m used to, but it was particularly cool to race as a team. The comradery was great. Scrambling through kelp and over rocks, was very different to what we normally do on the road, but it was so much fun!”

Competitive but fun could be the tag-line of the Torpedo SwimRun presented by OUTsurance series. In the Black grade events, like Torpedo Cape, each team sets their own objectives and it is not uncommon to see athletes taking it very easy. With a city as scenic as Cape Town hosting and supporting the event it is no wonder some choose not to race. The series also hosts Blue grade events, which are undertaken individually, and these tend to be even more relaxed.

In fact, the final race of the Autumn Torpedo SwimRun presented by OUTsurance series is a Blue grade event. It is scheduled to take place on the 25th of April, in the Cradle Moon game reserve, outside Johannesburg. Featuring 4 swims and 4 runs the route totals 15-kilometres in length; with the swims taking place in the Cradle Moon dam and the Crocodile River. Would-be SwimRunners can learn more about Torpedo Cape and the upcoming Torpedo Moon by visiting www.torpedoswimrun.com. 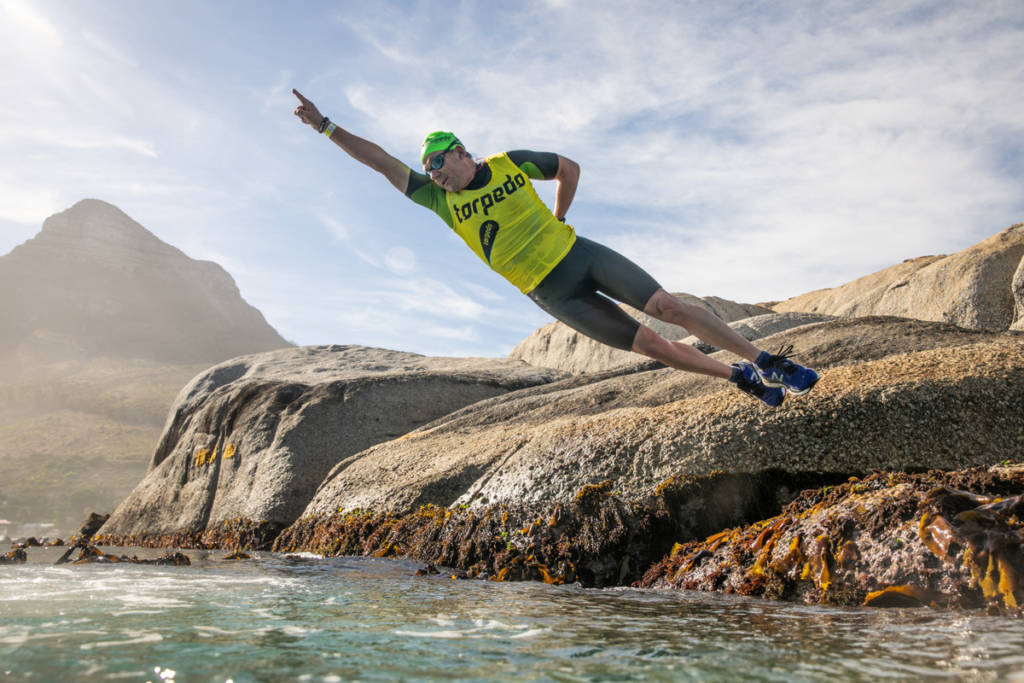 Torpedo SwimRun presented by OUTsurance events are as competitive or fun as you choose to make them. Photo by Caleb Bjergfelt. 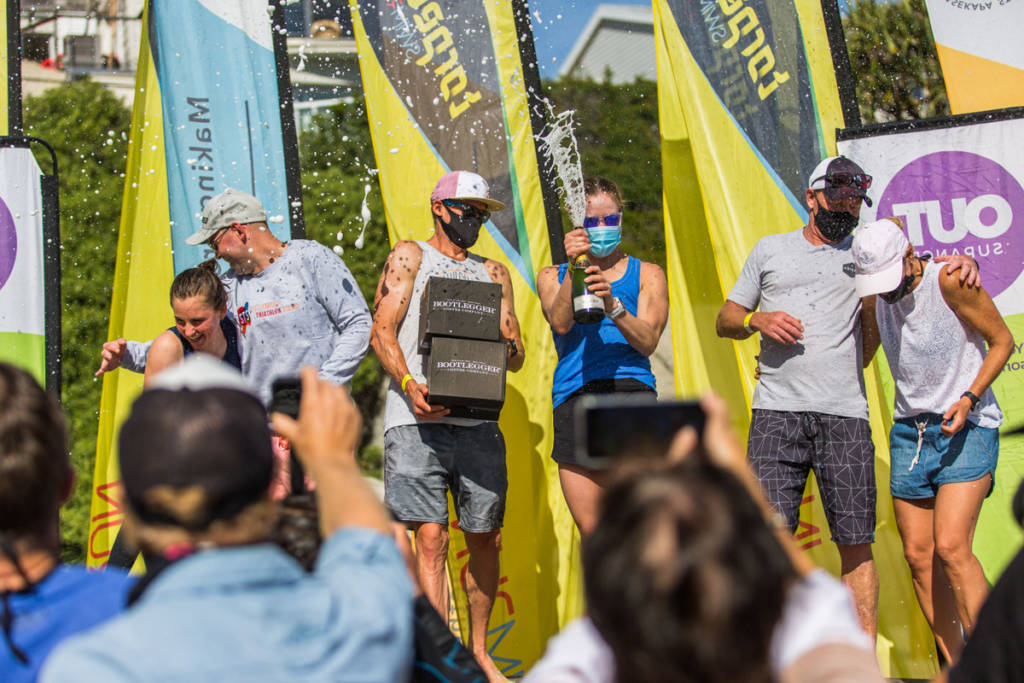 Annah Watkinson sends her fellow mixed category podium finishers ducking for cover as she celebrates her Torpedo SwimRun Cape by OUTsurance victory with a fountain of MCC. Photo by Johann Minnaar/Threshold Photography.

To view the full results from the Torpedo SwimRun Plaisir by OUTsurance click here.