[My] landmark is a kopje-crest that breaks the veldt around; and [familiar] constellations west each night above [my tent] – in the land of Thomas Hardy and Drummer Hodge the Trek2Teebus showcases the best of the Great Karoo.

There’s more to a mountain bike stage race than the racing and the routes. The venue, the hospitality and the food are all essential elements too. Especially the food…

Heading far inland, into the heart of the country its remarkable how diverse South Africa is. The way we drove up, from Stellenbosch to Steynsburg, via George and Graff Reinet was certainly the scenic route. Taking in the Cape Fold Mountains, the rolling fields of the Overberg, the forests of the Garden Route and the platteland of the Karoo. 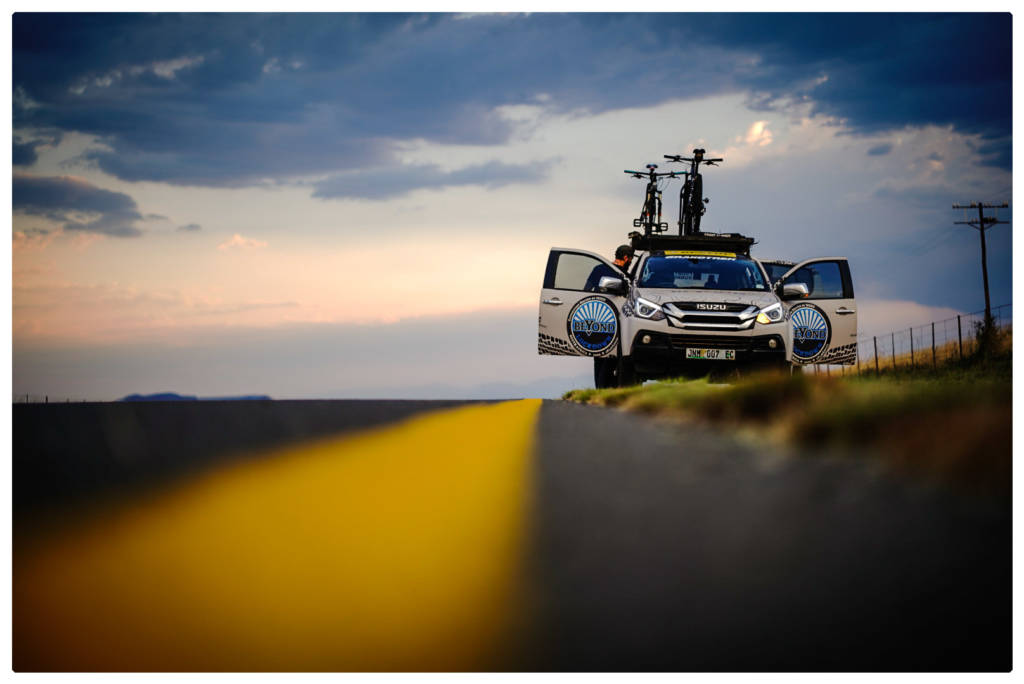 On the long road to Teebus. Photo by Jacques Marais.

Stopping for lunch in Graff Reinet pointed out the hidden gems of the interior too. The main road of town is unpromising, dusty and dilapidated. But turning off into the side streets a coffee roastery, florists and speciality delis lure visitors in. It turns out there’s more to the Eastern Cape than what meets the highway traveller’s eye.

Fed and rejuvenated by a beetroot juice we hit the road once again, heading for Steynsburg. If you’ve never been, I don’t blame you. It’s not exactly somewhere you’re likely to drive through, unless you’re on your way to Rhodes, in the Eastern Cape Highlands. The nearest bigger towns are Aliwal North, to the North West, and Cradock, to the South. 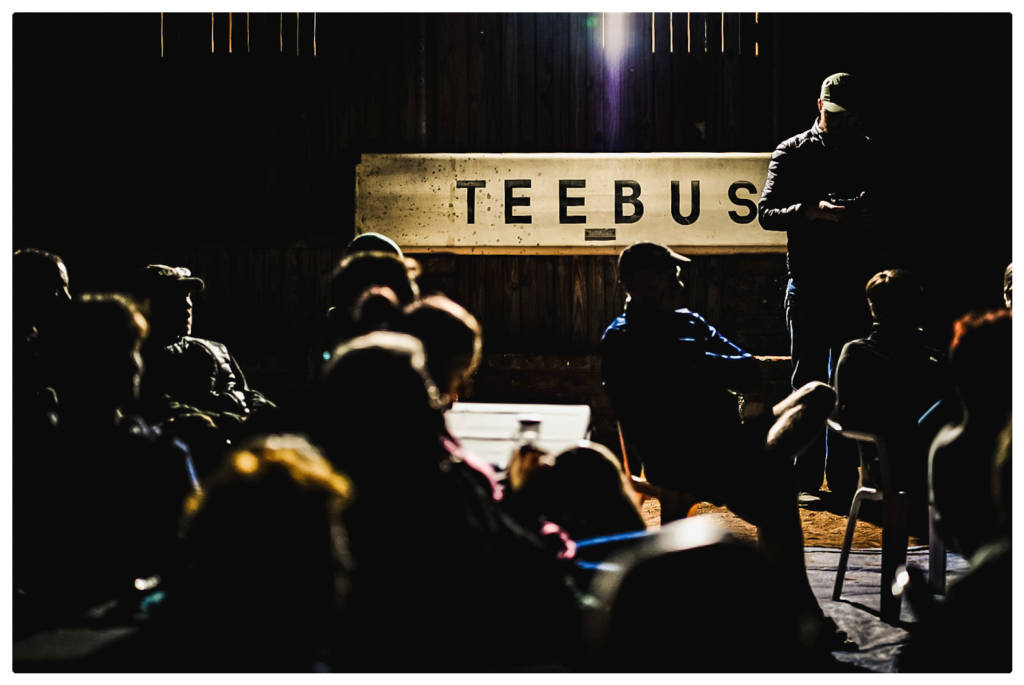 A warm welcome on a chilly Karoo evening. Photo by Jacques Marais.

The Trek2Teebus race village isn’t in Steynsburg itself. It’s located 20 or so kilometres out of town, on Oom Charles Viljoen’s farm, Harmonie. Nestled in a typical Karoo basin, surrounded by grasslands and further afield koppies and ridgelines. The icons of the region, one of which lends the race its name, are the Teebus and Koffiebus hillocks. They jut, conically, from the plains and boast rocky crenelations like massive medieval castles. 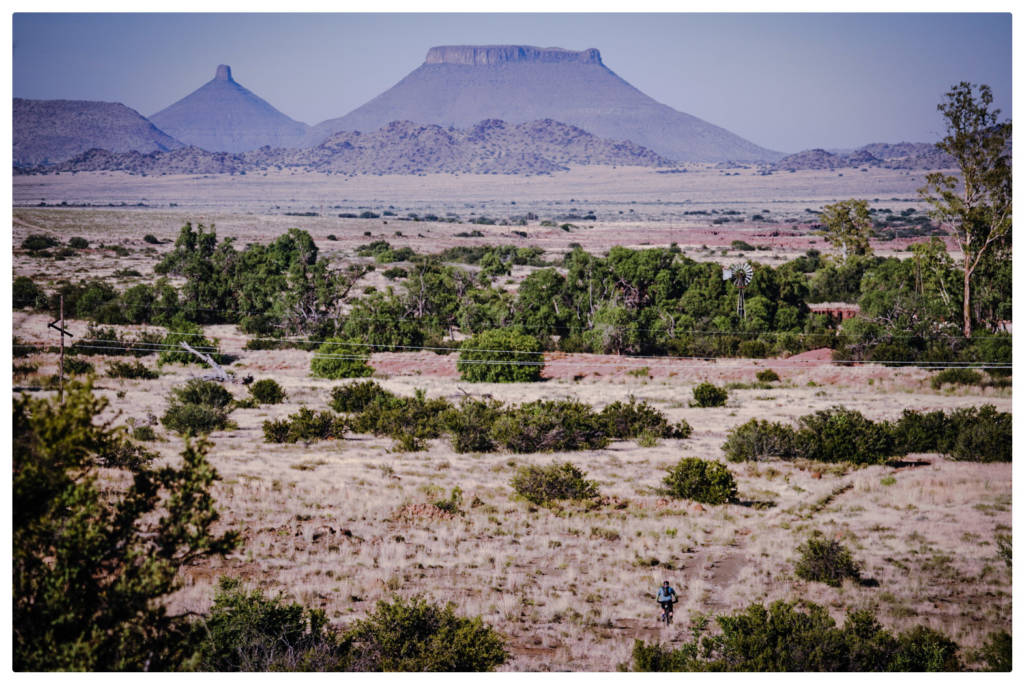 The Southern butte, Teebus, has a sharper peak while the Northern, Koffiebus, features a large flattened plateau at its summit. Legend has it, though said legend is somewhat contested, that the koppies got their names from the containers which the voortrekkers kept their coffee and tea in as they trekked across the Karoo. As someone who is partial to a good cup of tea or coffee, I can appreciate their sentiments. Particularly if their Koffiebus and Teebus containers were running low. 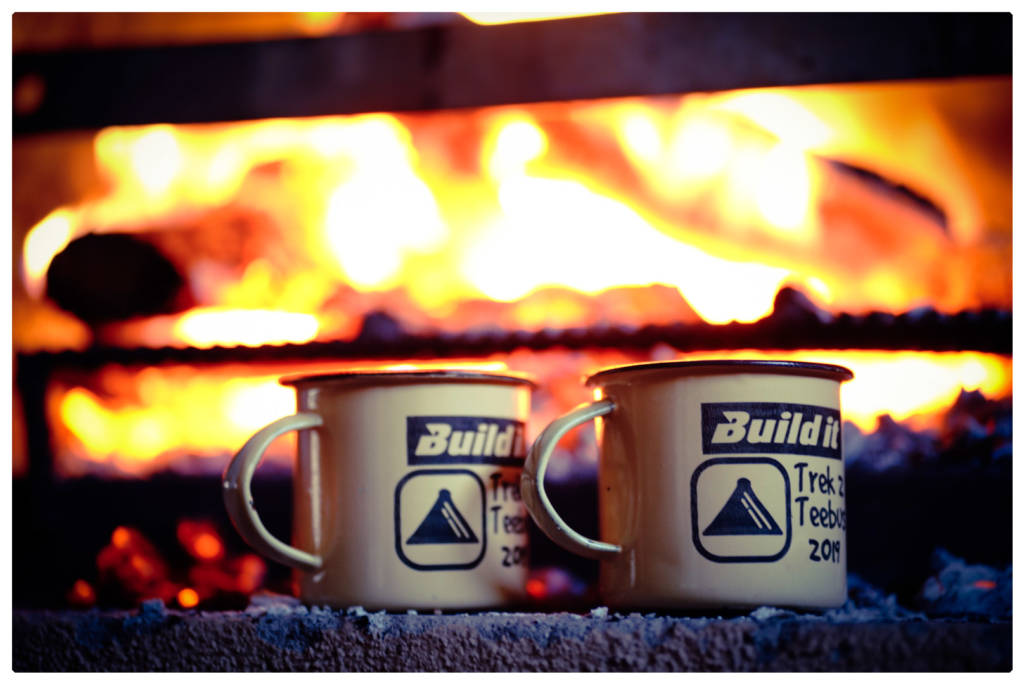 Arriving at Harmonie Farm, after an 11-hour drive, we were welcomed by the ever-friendly Rohan Germishuys. Beers and good-natured banter followed. The Petrichor Adventures owner was clearly in good form, as he welcomed nearly 100 riders to his company’s first race since the pandemic started. 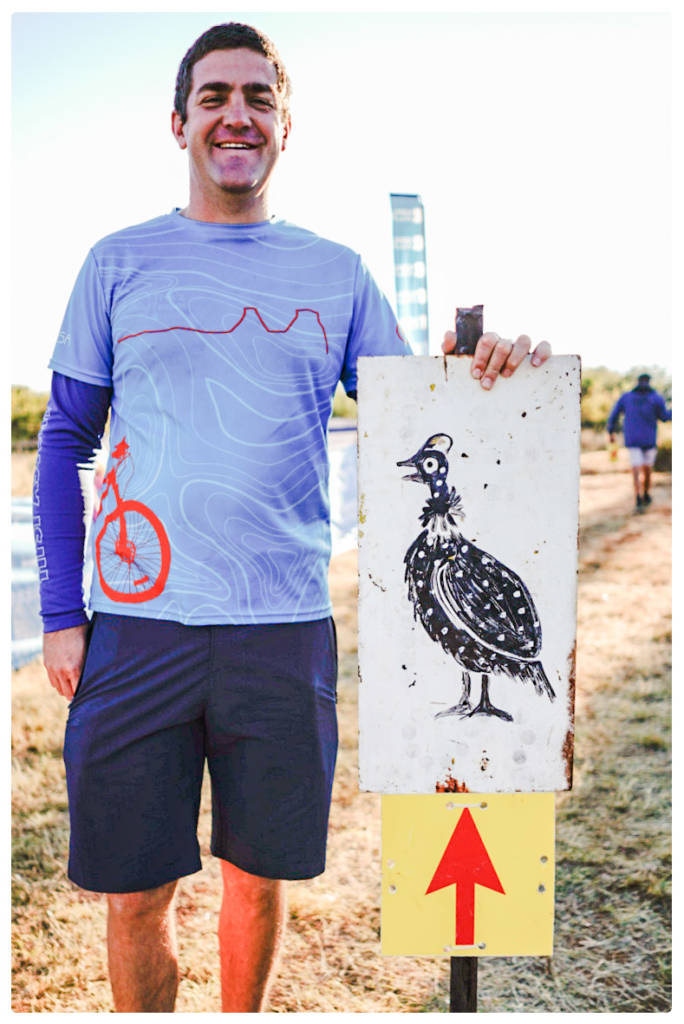 Dinner, one of the primary metrics I judge stage races by, featured a mountain of food. It was clear that nobody would be going hungry at Trek2Teebus. There were about 20 different breads, salad, lasagne and sweet vegies. I overdid it, and only needed 10 jelly babies and a small piece of boerewors to keep me going throughout the opening stage the next day. 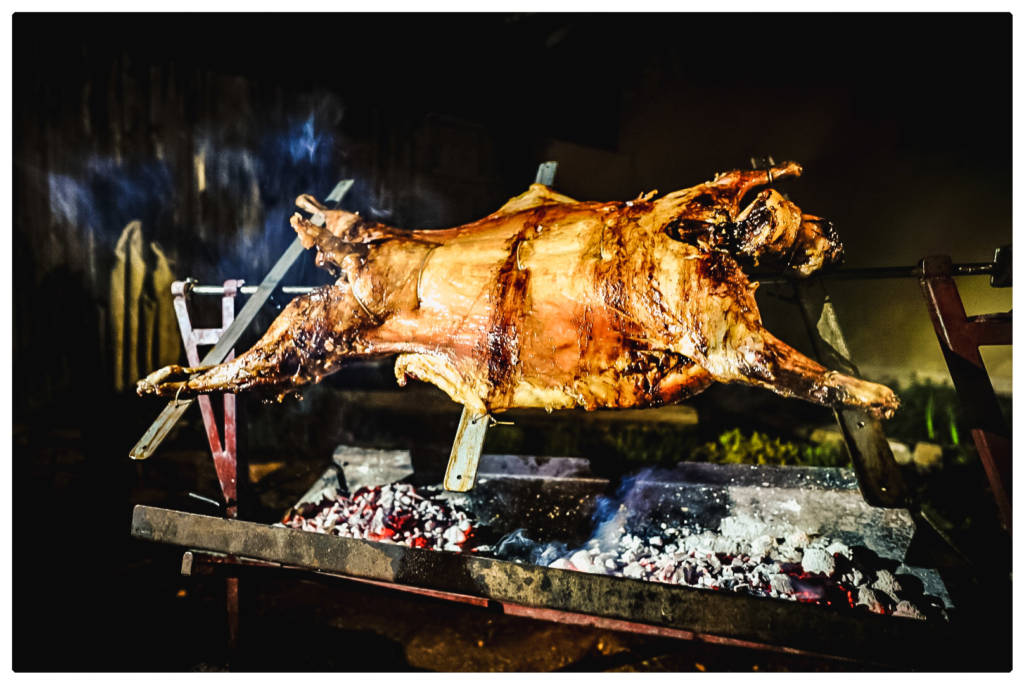 73-kilometres with 817-metres of climbing
To be honest it was tougher than expected. The stretches of grassy jeep track refused to allow anyone to gain any momentum. Fortunately, they weren’t too long and most of the route was made up of smooth gravel road and hardpacked singletracks. 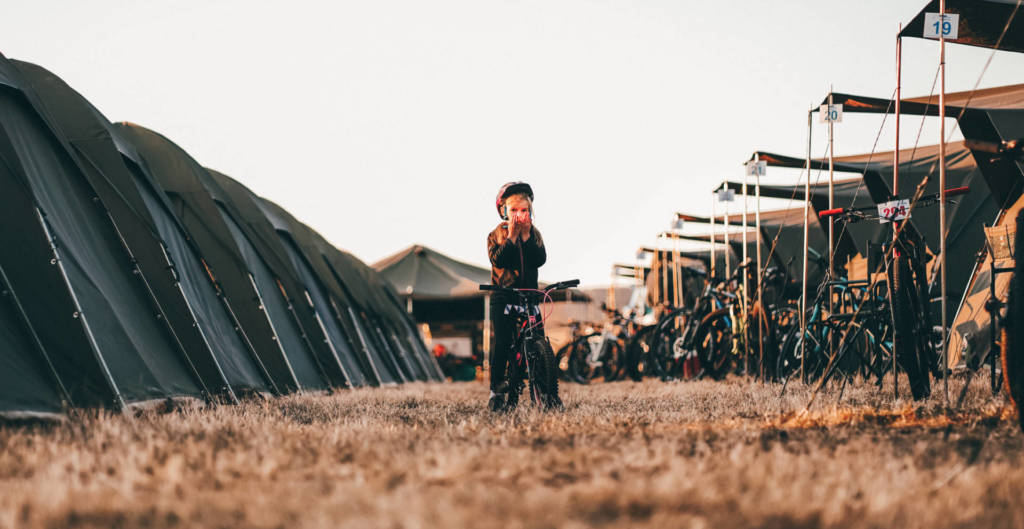 Getting ready for Stage 1. Photo by Zane Schmahl.

The scenery was suitably breath-taking too. We climbed to the ridgelines, which bisect the Karoo plains, and bombed down to Steynsburg and later to a dry waterfall. Summers have been dry and the winters not quite cold enough to produce heavy snows. In previous years the waterfall was flowing during the Trek2Teebus. 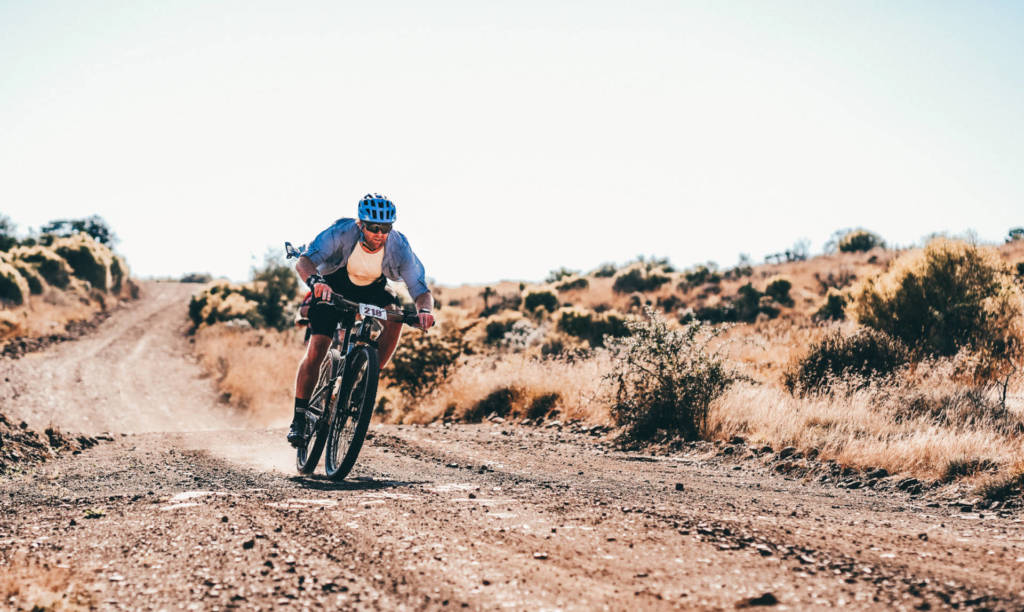 The author in action on Stage 1. Photo by Zane Schmahl.

Hearty Karoo hospitality abounded at the waterfall too. The braaimaster, Johan de Beer, wouldn’t take no for an answer, while handling out ice-cold beers and boerewors. 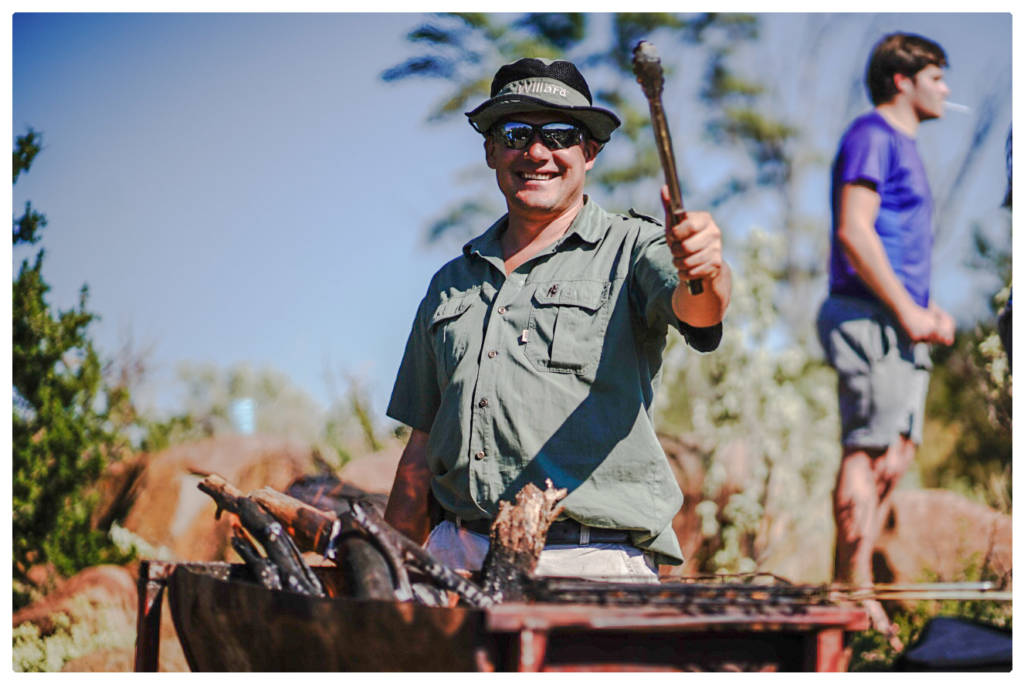 Refuelled and rehydrated we set out again, descending from the highlands into the plains. Then it was 20-kilometres home, largely on fast and flat terrain. Home to Harmonie and a massive lunch; of chicken pie, salad and best of all, pumpkin fritters. Made the right way too, with lots of syrupy sauce. 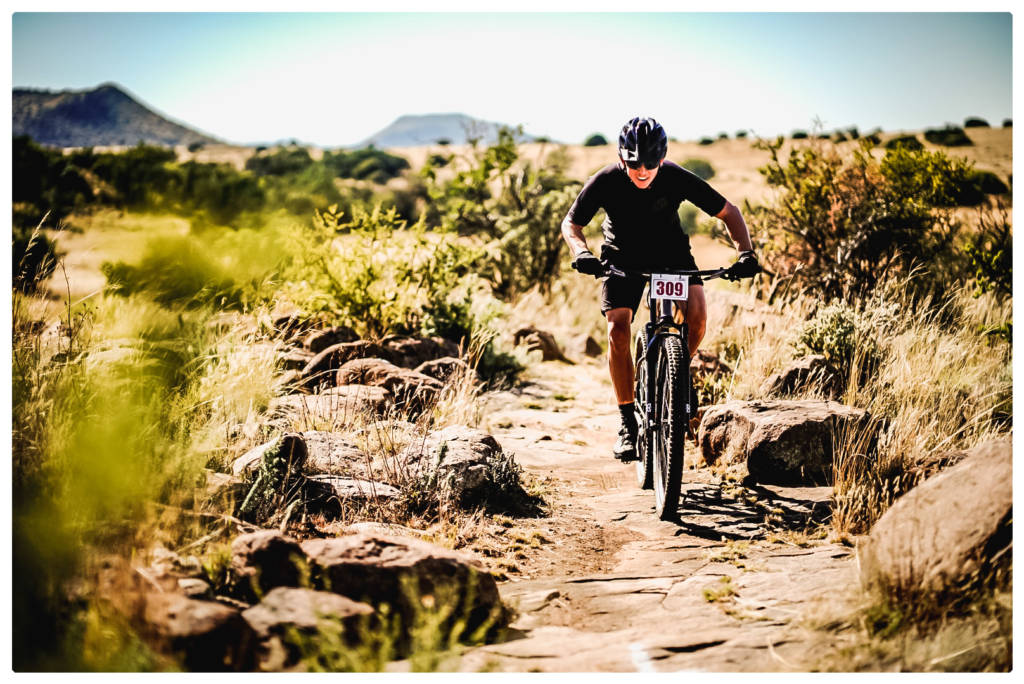 51-kilometres with 710-metres of climbing

After a day in the plains and koppies on Stage 1, the second day of the Trek2Teebus stage race took us into the Karoo mountains. Not being a geologist, I can’t tell you what created the buttes and mesas which punctuate the plains. But I can tell you that fingers of proper mountain ranges, the eastern edges of the Drakensburg perhaps stretch into the Karoo too. 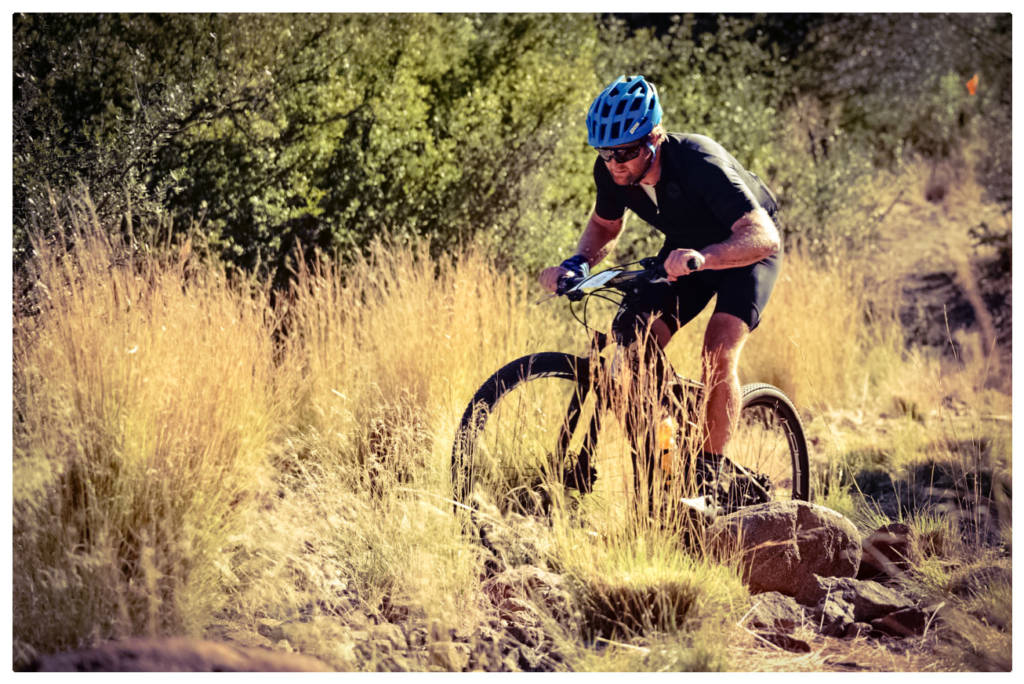 Stage 2 took us into those foothills. Starting at just below 1 300 metres above sea level the highest point of the day, at the summit of the Bulhoek Pass, was just over 350 metres higher. Not a huge mountain in relative terms then, but still one that reaches 1 650-metres above sea level.

The riding as a result was far more technical than it had been the day before. Which suited me to a T. I vastly prefer the playful style of riding, which comes with challenging terrain, than the steady power output required to conquer the smoother trails. 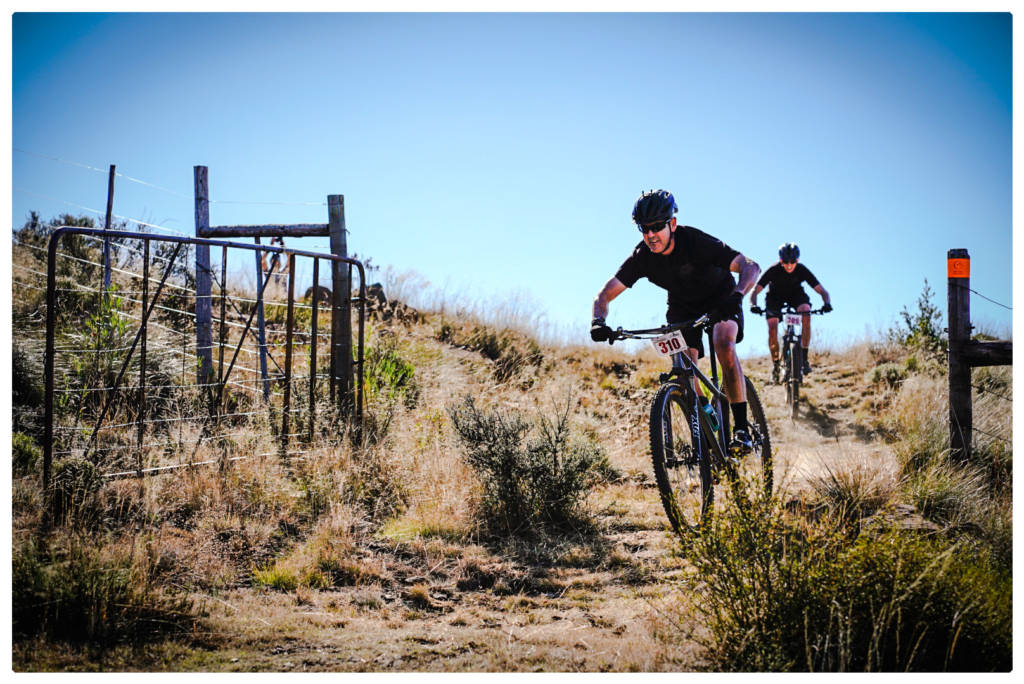 Charging towards the singletrack. Photo by Jacques Marais.

After a 10-kilometre or so warm-up we hit the day’s first singletrack. A B-line option provided less confident riders with a way around the technical terrain and a 5-kilometre short-cut. The singletrack climb was initially easy enough, but a brutal final 50-metres had me off my bike as I lost traction on the loose rocks and steep trail. Then it was all downhill to the Bulhoek tar road. 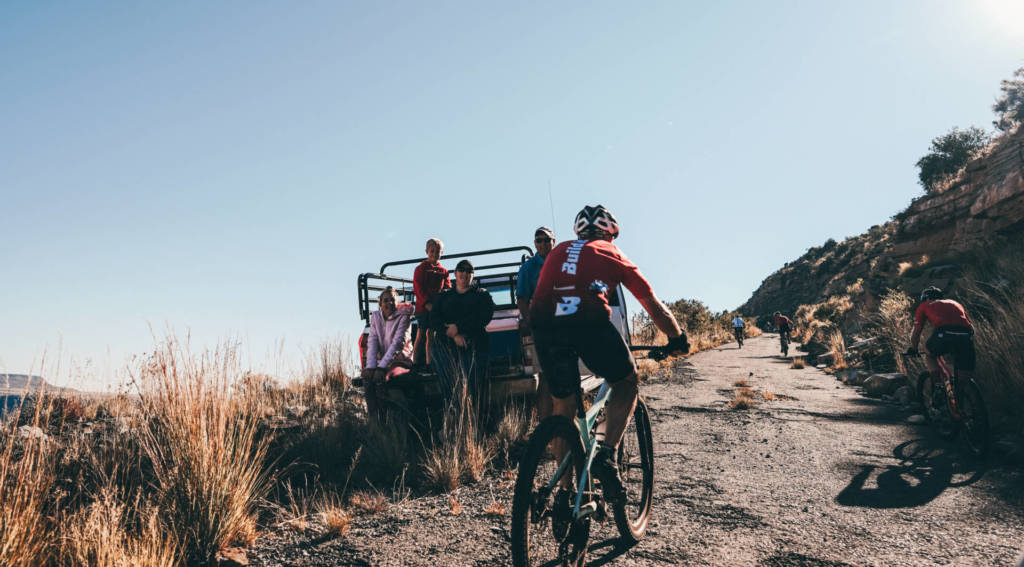 The Bulhoek Pass is steep but all on tar. Photo by Zane Schmahl.

That downhill was anything but a free-ride. The trail was, what Swiss Epic race director Corina Feuerstein would call, a ‘natural trail’. Which in non-politically correct terms means an unsculpted cattle path. Infinitely more ridable than a fall line straight down a mountain, but the type of singletrack which begins to overload your senses if it carries on too long.

This one was just a few hundred meters of truly white-knuckle riding, then it levelled out to a gradual descent on hard-packed earth with the occasional off-camber corner to keep you on your toes. At the bottom the Bulhoek Pass awaited. 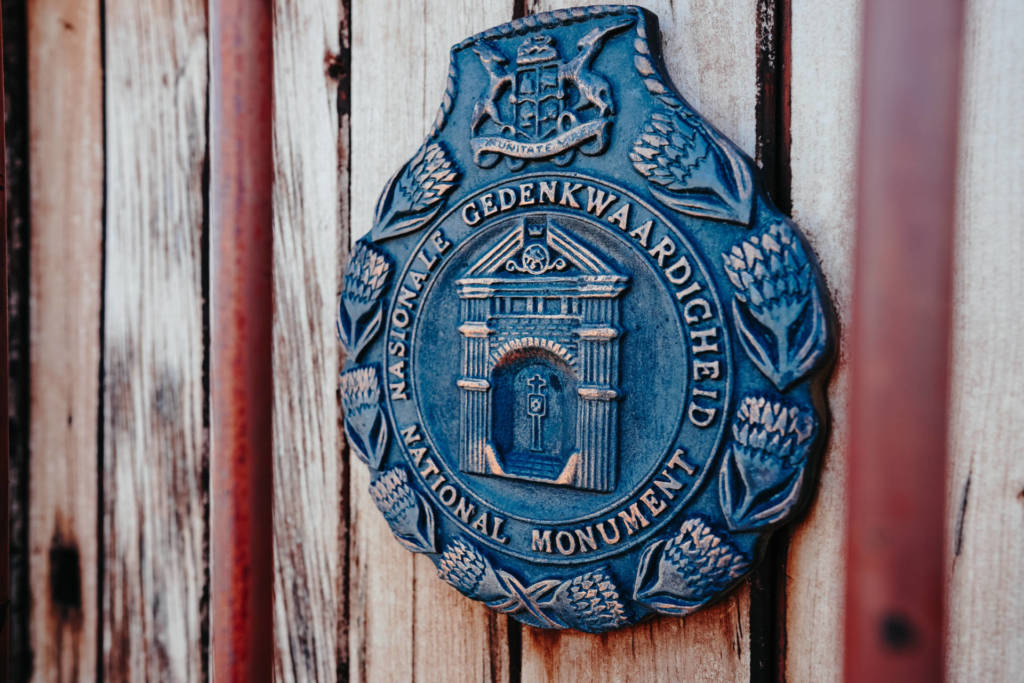 On tar, although the gradient averaged a strenuous 11%, the pass wasn’t too challenging. And the views were spectacular. A brief traverse across the plateau took us to another challenging descent. An old, eroded, jeep track dropped back to the plains. More great, moderately technical, riding followed. Then it was back to Harmonie Farm and the finish line, for lunch and post-race beers. And maybe a long afternoon nap. 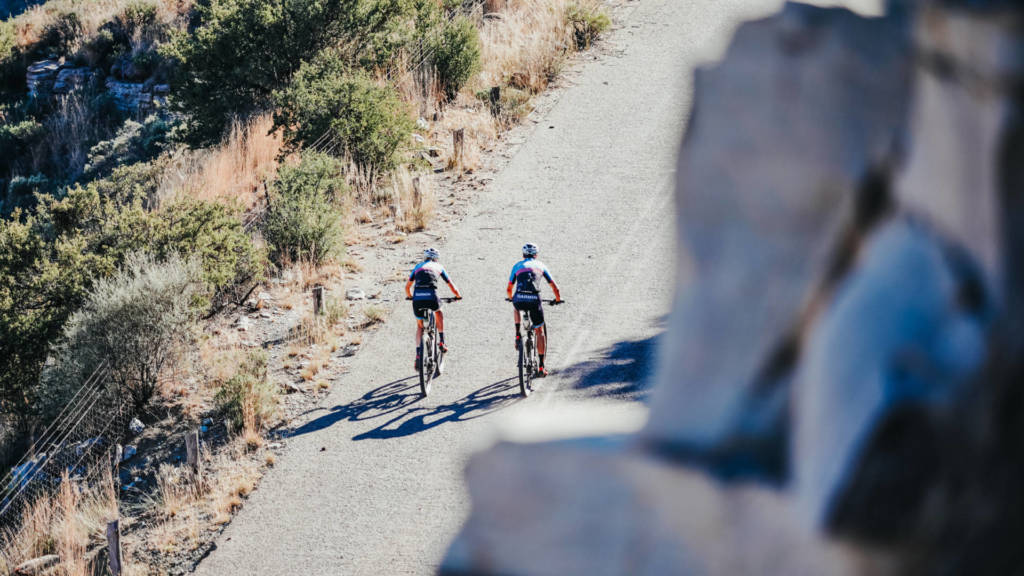 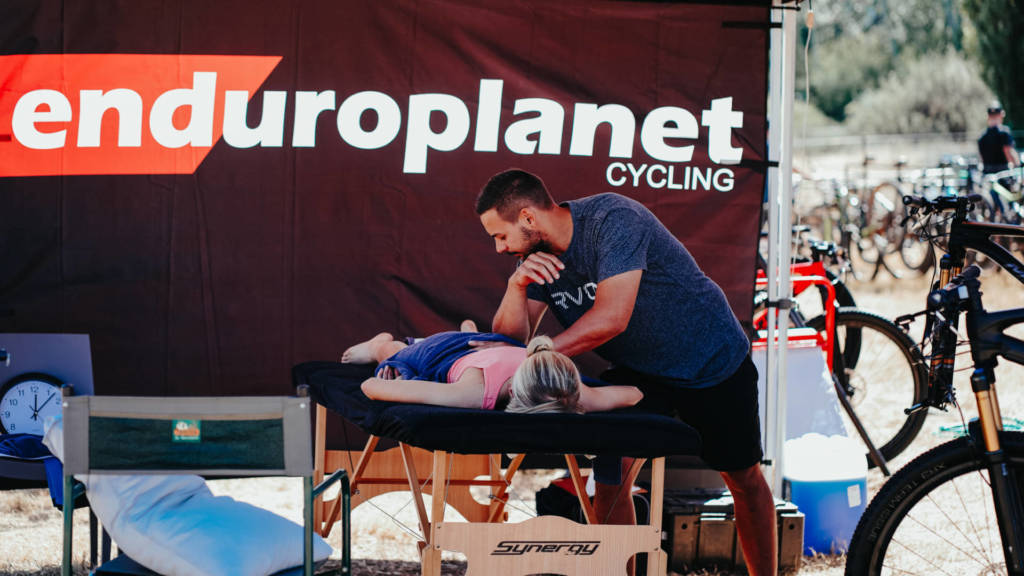 80-kilometres with 470-metres of climbing

After the coldest night of the race the early start for Stage 3 seemed a little cruel. But we all had a long drive ahead of us, so the riders had an extra incentive to knock off the final 80km in double-quick-time. Fortunately, while the route for the final stage was the longest of the race, it was also the flattest. 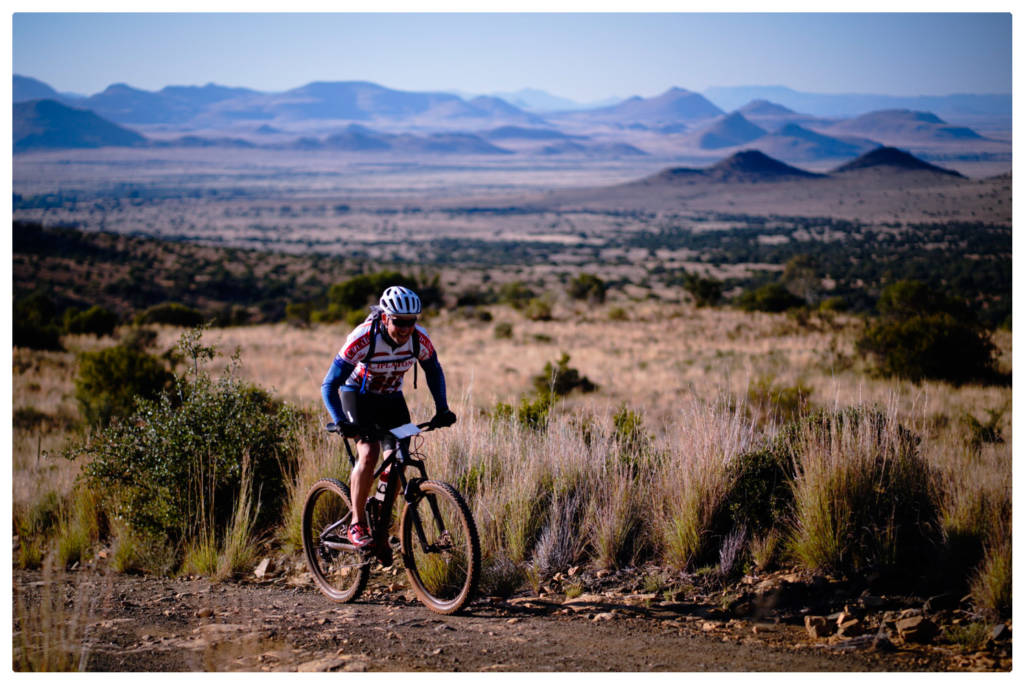 There was climbing early on Stage 3, then it was flat to the finish. Photo by Jacques Marais.

Again, we headed north; into the Highlands. This ensured that the bulk of the metres of accumulated elevation gain were completed before the first water point. The scenery was best in the first half of the day too. Initially Karoo bushveld lined the road verges as we climbed a low ridgeline. Then dropping into the valley on the far side the bush gave way to stands of poplars, lining clear-water streams. If I could cast a fly rod with any style or accuracy I’d have been temped to stop to check for trout in the pools. 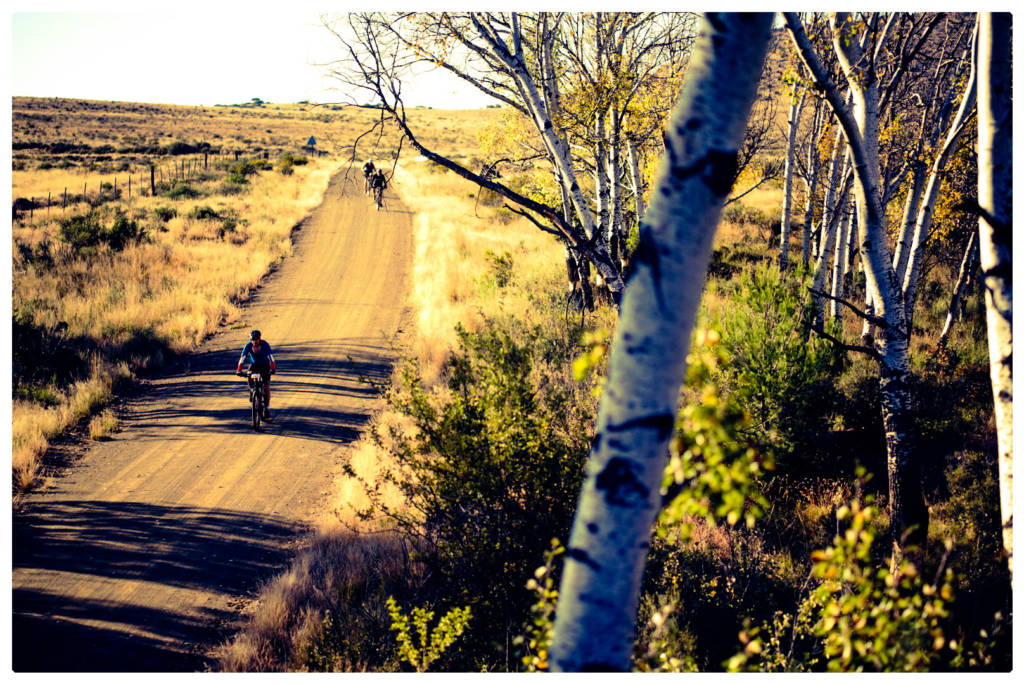 A grove of poplars stood on the banks of a highlands river. Photo by Jacques Marais.

I cannot though, so I settled for peddling on. Heading back towards the plains. Following the course of the Gariep-Fish tunnel. While the water raged 30-metres below the earth, in a tunnel large enough to drive a truck down, my energy levels were starting to falter. I’d been riding solo for 34-kilometres by the time a group caught me at the second water point. 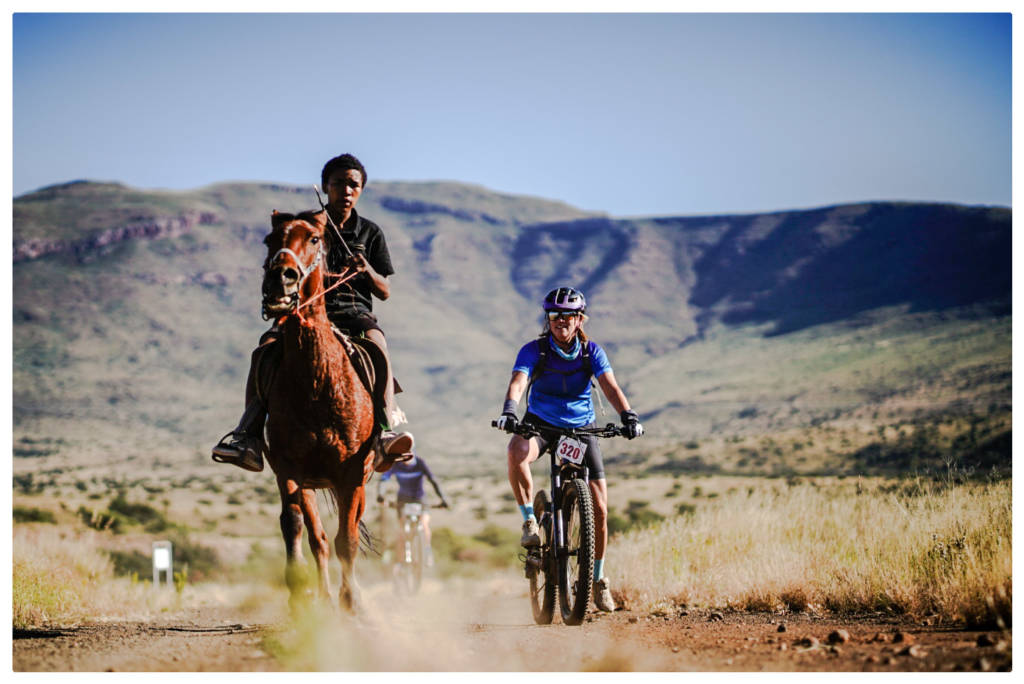 Friendly Eastern Cape locals make the race what it is. Photo by Jacques Marais.

Jumping onto their train I found myself swapping turns for the final 30-kilometrs of the Trek2Teebus. This last stretch of the race took us into the shadow of the Teebus and Koffiebus koppies and then to the point where the Gariep-Fish tunnel bubbles to the surface. An impressive torrent of muddy water surges into the Teebus River, turning it from a trickle to the lifeblood of the farms on its banks. Further downriver the Teebus merges with the Fish and swells its waters. Thereby creating a green snake of fertile lucerne fields and orchards among the yellow Eastern Cape grasslands. 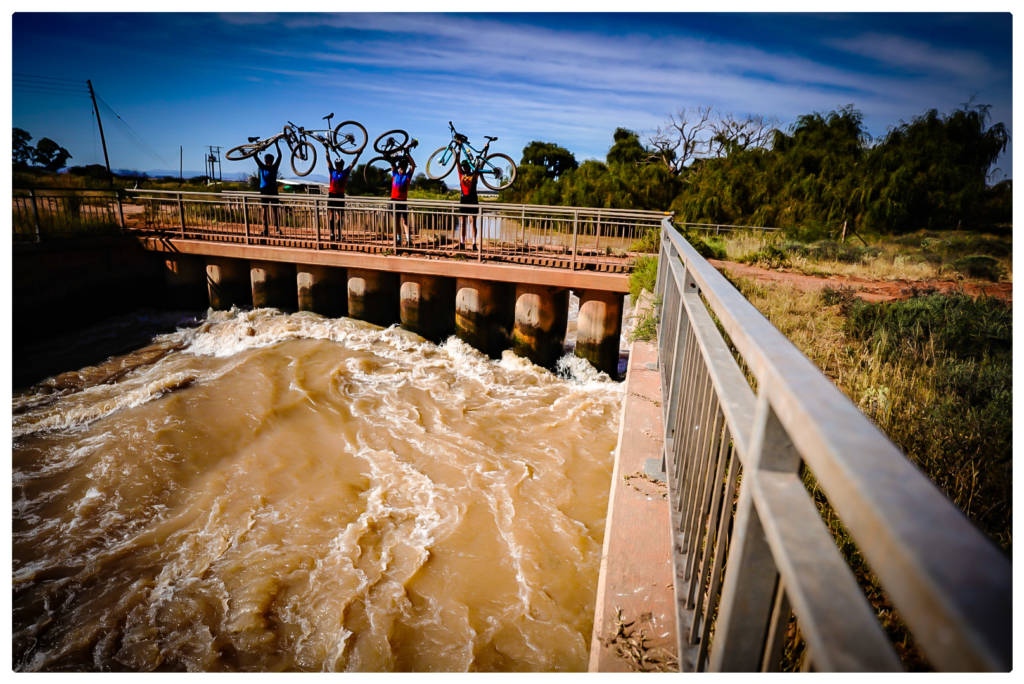 The Teebus River, swollen by the waters from the Gariep-Fish tunnel. Photo by Jacques Marais.

It wouldn’t be a stage race without a last sting in the tail. And Rohan had once plotted for the riders to remember him by. A rocky jeep track climb picked its way over a gradual rise, revealing Harmonie Farm and the finish line from the summit. Then it was all downhill to our last lunch, packed bags and the long drive back from Steynsburg to Stellenbosch.

Three days of riding, laughing and eating completed. With plenty of photos to remind us all of our time in the Karoo. To fuel our dreams of cold, starry, nights and a return to the hinterland. 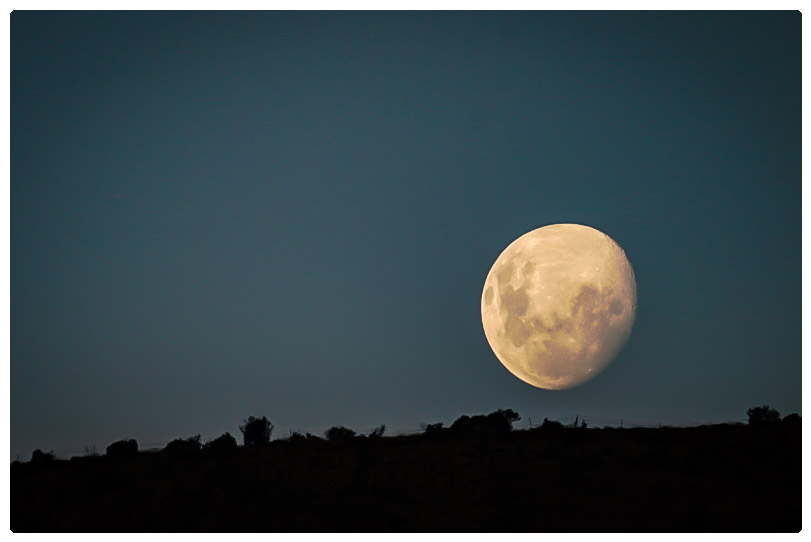 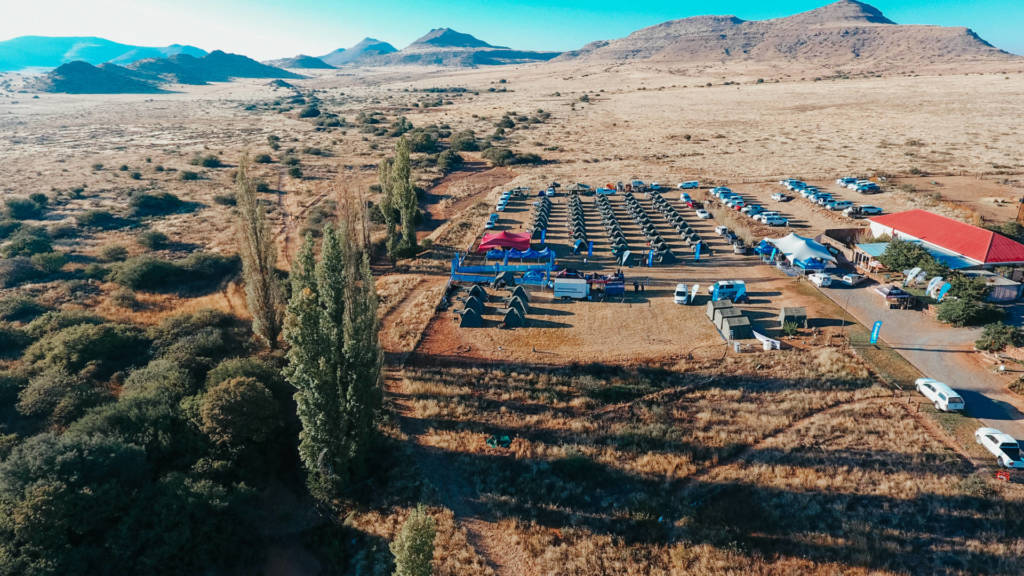 The Trek2Teebus race village on Harmonie Farm, near Steynsburg. Photo by Zane Schmahl.