The 2022 Momentum Medical Scheme Tankwa Trek, presented by Biogen, got underway at Kaleo Manor in the Koue Bokkeveld on Thursday, 3 February. A short, 29-kilometre opening stage, demanded full gas racing as the teams sprinted for each singletrack. Nine-time UCI XCO World Champion, Nino Schurter utilised all of his racing nous and formidable power to ensure that he and, Corner Card teammate, Filippo Colombo won the opening stage. In the women’s race, Mariske Strauss and Candice Lill got their title defence off to a winning start.

The punchy route, which featured a mix of rocky singletracks, rugged dual tracks and a couple of gravel road drags ensured a frenetic first stage. Jaco Venter and Sascha Webber set the early tempo, as they led through the first 10-kilometres. Sadly, Venter’s race ended prematurely, in the day’s first singletrack. The Trek-Vaude man’s front wheel was pulled from underneath him by a small antelope, possibly a steenbok (Raphicerus campestris), which ran across his path. 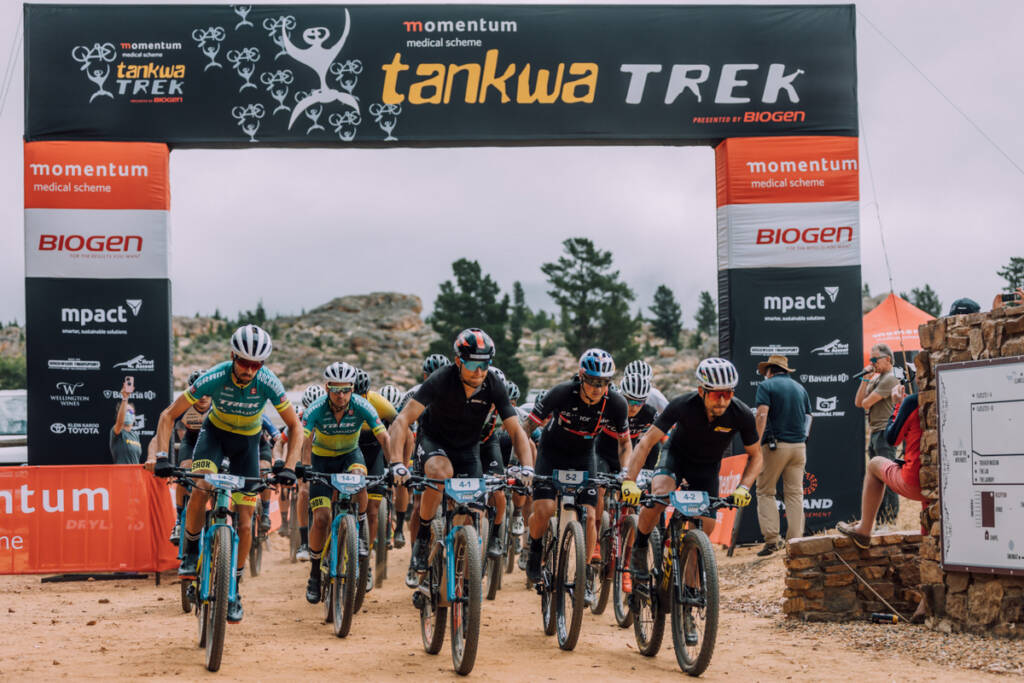 Venter was brought down at high speed, cartwheeling dramatically over the bars. He was unable to complete the stage as a result. Somehow the other riders, who were following close behind, were unaffected by the crash and the racing continued.

Simon Andreassen was the next aggressor; but soon Schurter and Colombo came to the fore. The Swiss pair’s charge through the stage was briefly interrupted by a slow puncture to Schurter’s front wheel. After stopping to reinflate the tyre the Corner Card team had to chase back, but managed to regain contact with the lead group inside the final 10-kilometres. This set up an exciting finish with Toyota Specialized, MES Electrical Suppliers and Imbuko {type}DEV equipped by Giant 1 all also in contention for stage honours. 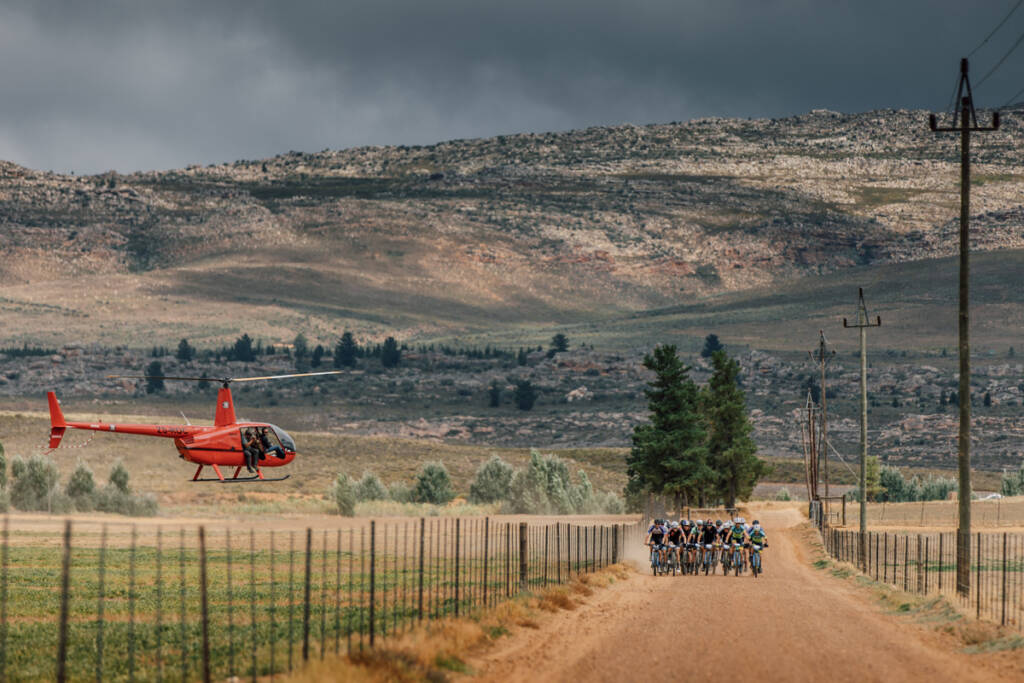 Overcast conditions made for a pleasant start to the race, which kicked-off with a 29-kilometre stage on Thursday afternoon. Photo by Ewald Sadie/Shift Media Co.

Schurter lead Colombo into the final singletrack and the pair then benefited from a tangle behind them. Sprinting for the entrance to the fields, upon which the finish line is located, Matt Beers and Konny Looser came together. Looser was forced to stop completely as he ran out of space with Beers losing traction and control in a sandy patch. Despite the MES Electrical Supplies team’s other rider – Alexander Miller – crossing the line just behind Schurter and Colombo, Looser’s halt within the final 200-metres relegated them to third.

“It was a fast stage with very tight racing” Schurter commented. “We didn’t really know where the singletracks were so we had to stay near the front all the time. I had a small leak in my front tyre, but fortunately that didn’t cost us too much.”

“Tomorrow is going to be another exciting stage” he added. “There are only a handful of seconds between the top five teams” Beers pointed out. “The next few days are going to be fiercely contested. And it’s all to play for.” 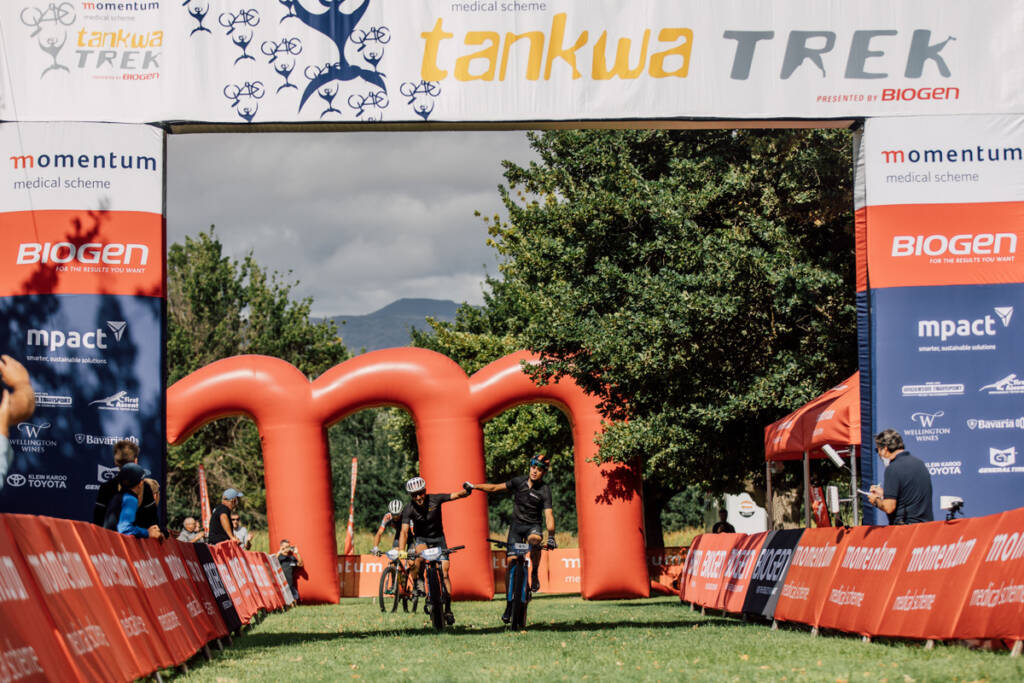 In the women’s race Strauss and Lill made an early break. “We got away on the first little climb and rather than waiting to be caught decided to push on” Lill stated. “With the rocky nature of the trails here it’s safer to get out in front and ride your own pace. There were a few times where we came upon really technical sections quite unexpectedly and I thought how dangerous they could be in a big group, like the men were racing in. With the tail wind you pick up a lot of speed without really realising it.”

Lill and Strauss’ margin of victory was a commanding 5-minutes and 42-seconds. Sarah Hill and Theresa Ralph won the sprint for second over the Efficient Insure Infiniti Racing. The tight gaps between the top men as well as the negligible difference between the second- and third-women’s teams bodes well for an exciting weekend of racing. 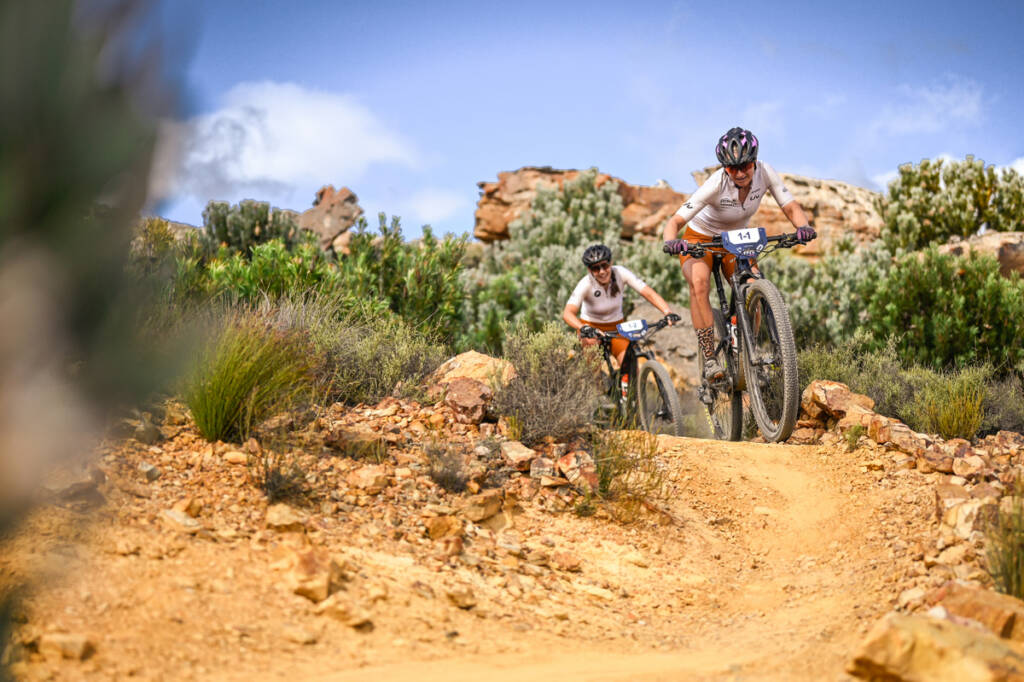 Mariske Strauss and Candice Lill dominated Stage 1 and got their title defence off to the best possible start. Photo by Sage Lee Voges / www.zcmc.co.za.

Friday’s Stage 2 is often underestimated for its difficulty. The 86-kilometre route, through the Witzenberg Valley takes in 1 900-metres of climbing and is run in reverse, to its usual anti-clockwise direction, in 2022. The racing will get underway at 06:30. 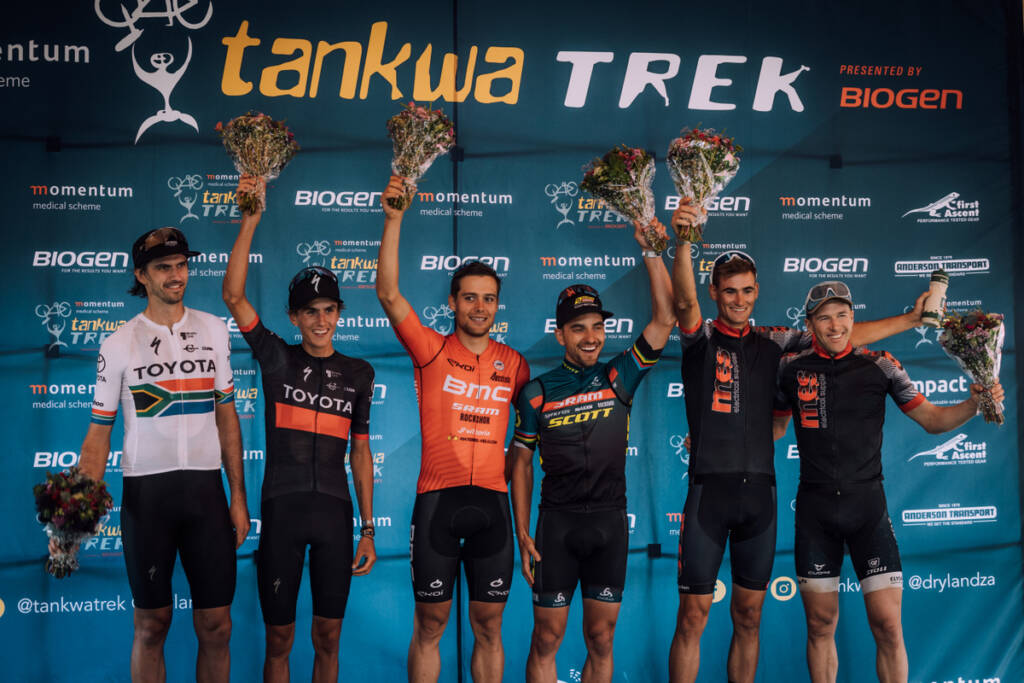 Nino Schurter and Filippo Colombo were joined on the day one podium by Matt Beers and Tristan Nortje (Toyota Specialized) and the MES Electrical Supplies team of Alexander Miller and Konny Looser. Photo by Ewald Sadie/Shift Media Co. 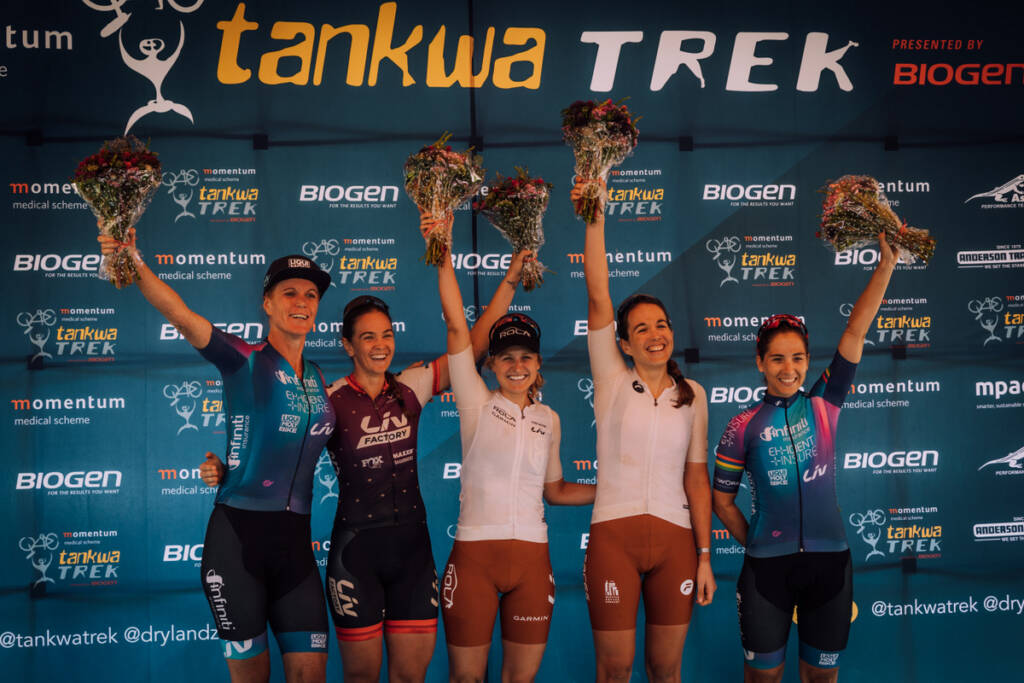 Please visit www.tankwatrek.co.za to view the full results from Stage 1.