Stage 2 of the 2022 Momentum Medical Scheme Tankwa Trek, presented by Biogen, saw repeat victories for the men and women in the First Ascent leaders’ jerseys. Nino Schurter and Filippo Colombo, of Team Cornercard, raced patiently before making the stage winning move in the final 25-kilometres. While Faces Rola’s Mariske Strauss and Candice Lill dominated from the gun to win by over 24 minutes.

The 89-kilometre-long stage – which took place on Friday, 4 February – featured a clockwise rather than anti-clockwise loop of the Witzenberg Valley. This meant that the day’s toughest climb came just 27-kilometres into the stage; but the technical singletracks then featured later, softening the legs for the final kilometres. Konny Looser, who had started the day in third position, began to struggle well before then. 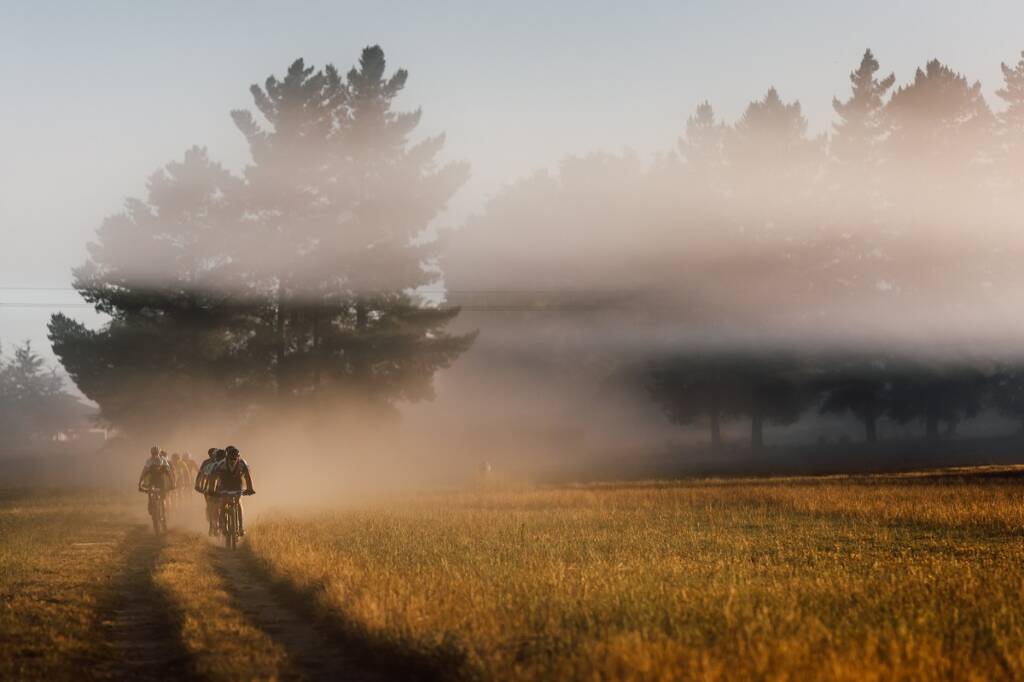 The Swiss marathon and stage race specialist lost contact with the leading group on the Old Wagon Trail. Looser’s partner, Alexander Miller, then helped pace him back to the front of the race; where Imbuko {type}DEV equipped by Giant were driving the pace. With the leading group of four teams in sight Miller punctured, putting the MES Electrical Supplies team out of contention for the stage.

This left Cornercard, Toyota Specialized and Cannondale Factory Racing, at the sharp end with Imbuko {type}DEV equipped by Giant. Schurter and Colombo were content to manage their efforts while the rest of the group worked to drop Alan Hatherly and Simon Andreassen before the long singletrack section along the eastern slopes of the Witzenberg Mountain range. 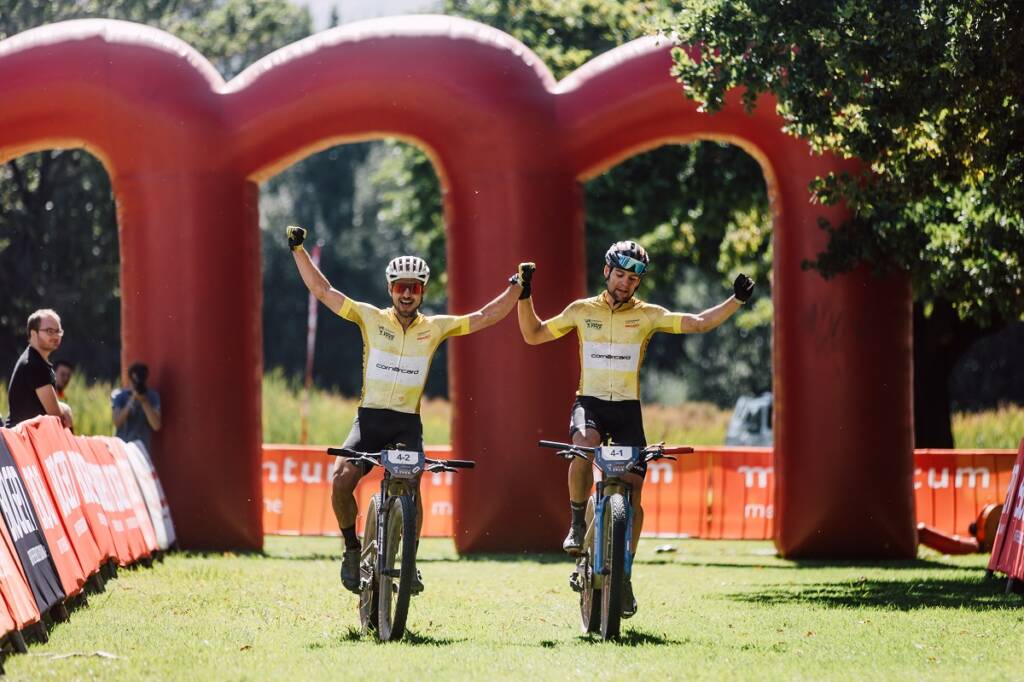 Nino Schurter (left) and Filippo Colombo (right) extended their general classification advantage by 1 minute and 47 seconds with their second stage win of the race. Photo by Ewald Sadie/Shift Media Co.

For the next 20-kilometres Schurter, Colombo, Wessel Botha, Marco Joubert, Matt Beers and Tristan Nortje played cat and mouse through the twisting trails. Then with 25-kilometres to go Colombo pounced. “Filippo said he recognised the trails from the Cape Epic and went to the front when he thought we could make a difference” Schurter explained. “Even though we were going in the opposite direction I knew where we were and where we were going” Colombo confirmed. “On the last climb of the stage I put in an attack and we were able to distance the other two teams.”

“The final 10-kilometres were flat but anything but easy” Schurter added. “There were lots of tricky corners with sand and loose rocks. It would have been easy to make a mistake and crash. So, we were happy to take our second stage win.” 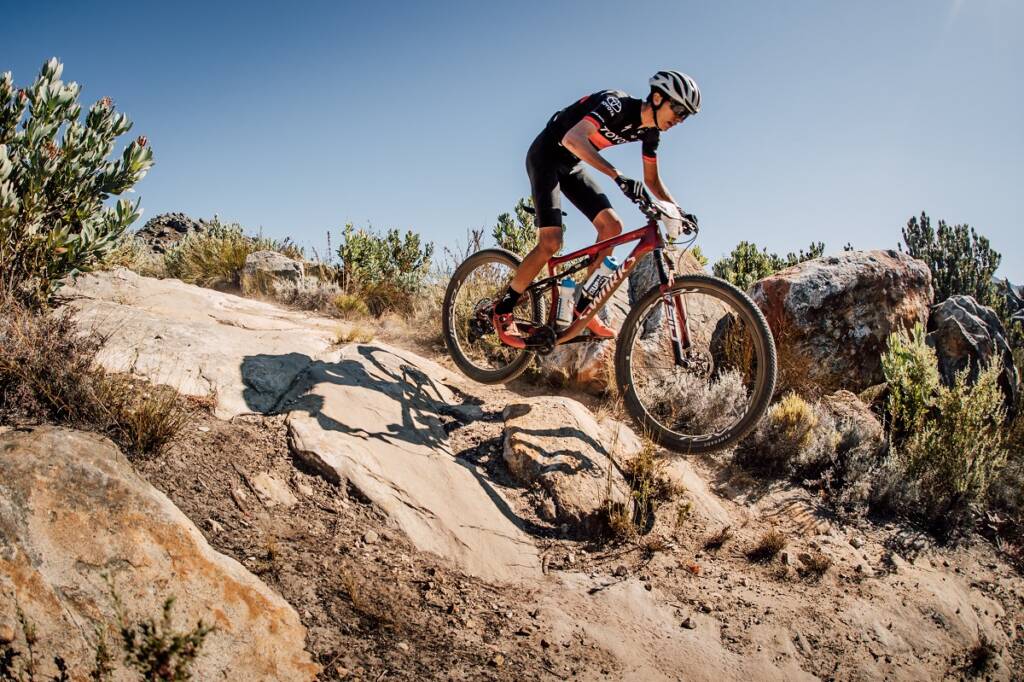 Tristan Nortje struggled in the closing kilometres of the stage, giving up second place on the general classification as a result. Photo by Ewald Sadie/Shift Media Co.

Behind the stage winners Nortje found the going very tough in the closing kilometres. This allowed Botha and Joubert to race to second on the stage and into second position on the general classification. Beers and Nortje hung on to finish third. The general classification gaps are now 2 minutes and 11 seconds between the Cornercard team in first and Imbuko {type}DEV equipped by Giant in second. Toyota Specialized are a further 2 minutes and 45 seconds back. Cannondale Factory Racing are 8 minutes off the pace in fourth.

Strauss and Lill’s march towards stage victory started within 5-kilometres of leaving Kaleo. The Faces Rola team rode their rivals from their wheels on the first kick of the course and never looked back. Behind them Samantha Sanders suffered an unlikely mechanical, when her pedal worked itself loose from the crank. This cost the Efficient Insure Infinity Racing team around ten minutes, yet they recovered to finish the stage in third. 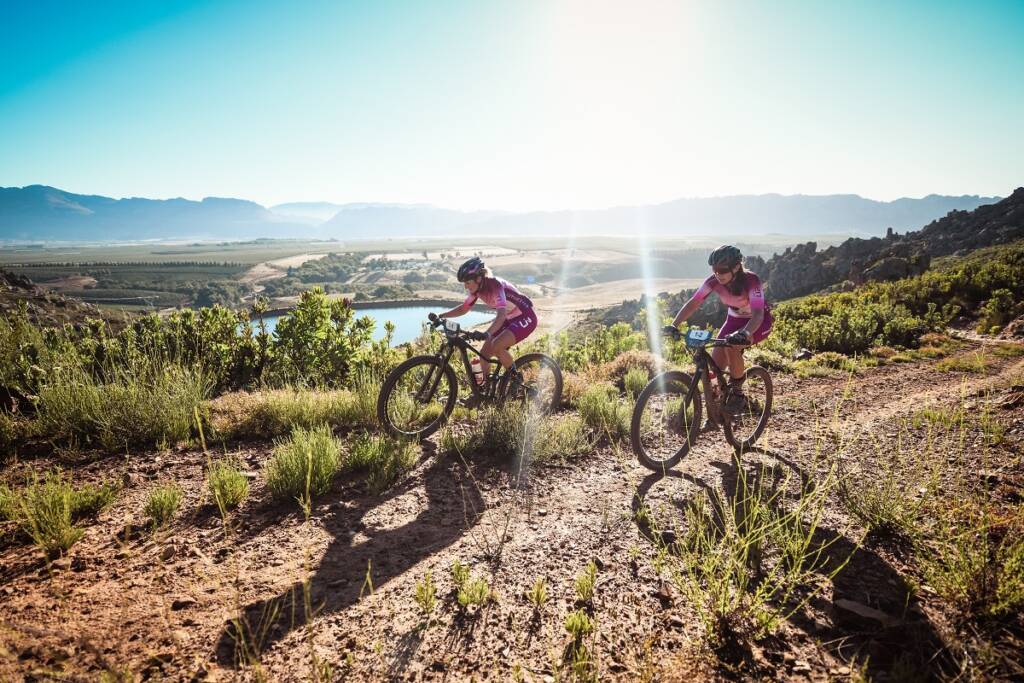 “The reverse route was really fun” Strauss enthused after winning Stage 2. “I preferred the shorter steeper climb, even though it was really steep. Racing on our own for so much of the day was a bit of a challenge. But we treated it as an important training ride and focused on maintaining a good pace throughout.”

The Faces Rola’s victory margin, of 24 minutes and 22 seconds over Liv Cycling South Africa saw their general classification advantage swell to 30 minutes and 4 seconds. Sarah Hill and Theresa Ralph hold second overall, with Sanders and Kim le Court in third ahead of the Queen Stage. 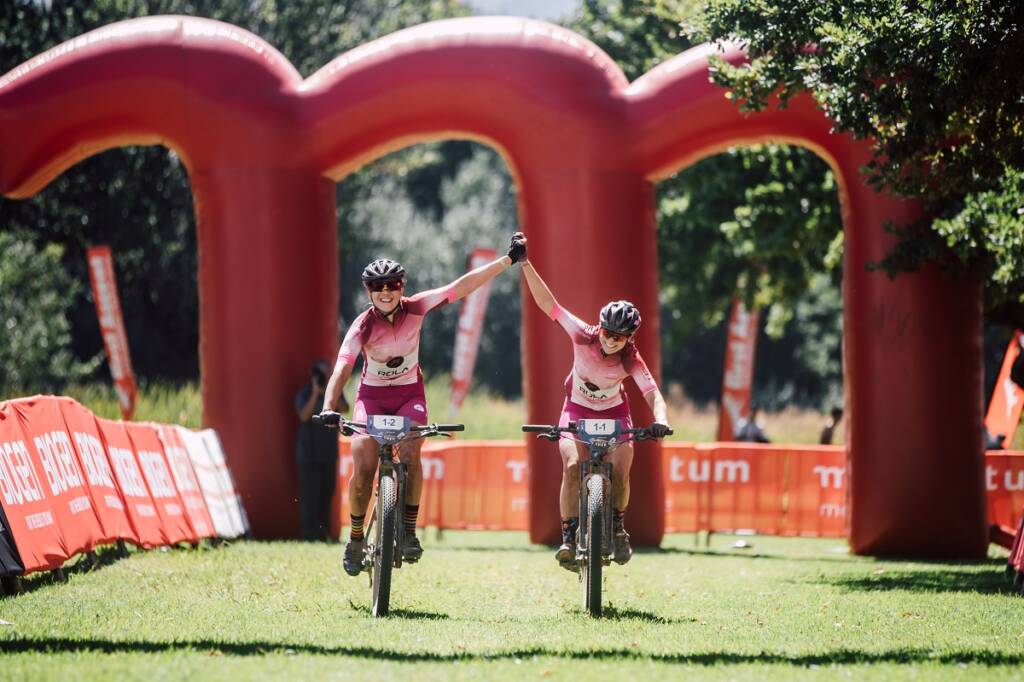 After their second stage victory Candice Lill (left) and Mariske Strauss (right) lead the race by over half an hour. Photo by Ewald Sadie/Shift Media Co.

Stage 3 includes the infamous Merino Monster, arguably South Africa’s toughest mountain bike climb. It gains nearly 1 000 metres in elevation, from the Ceres Valley floor to the high mountain peak, in 20-kilometres. In total the stage is 99-kilometres long and features 2 200-metres of climbing.

Mountain biking fans can follow the Queen Stage action from the Momentum Medical Scheme Tankwa Trek, presented by Biogen on Twitter, @tankwatrek. Photo galleries and videos from the race are available on the Tankwa Trek Facebook page and on Instagram, @tankwatrek. Live tracking, thanks to SPOT, can be found here. 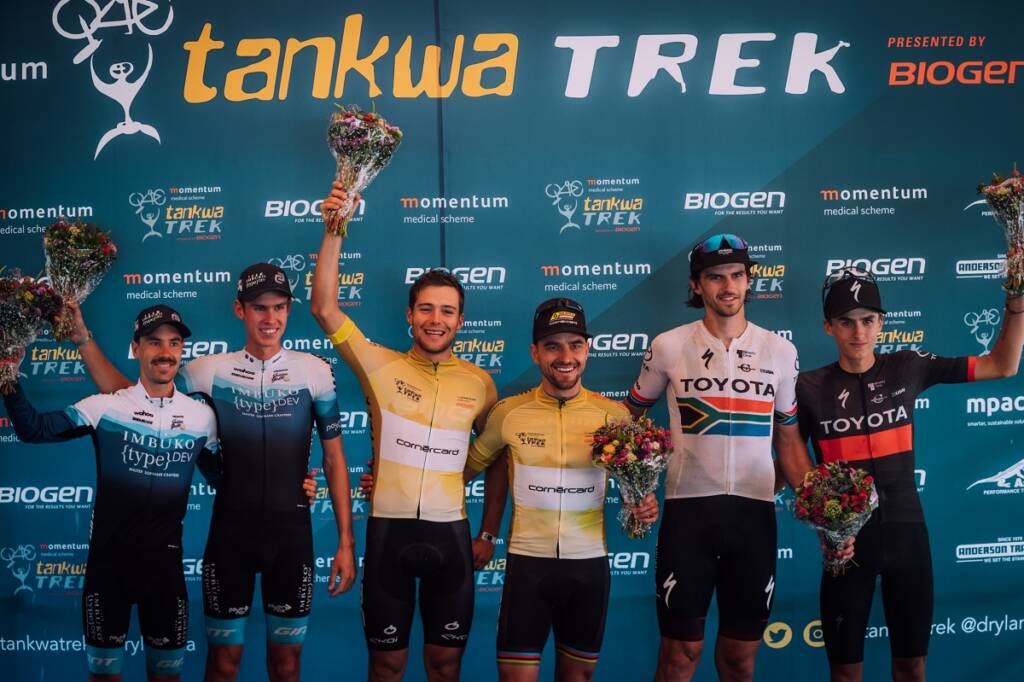 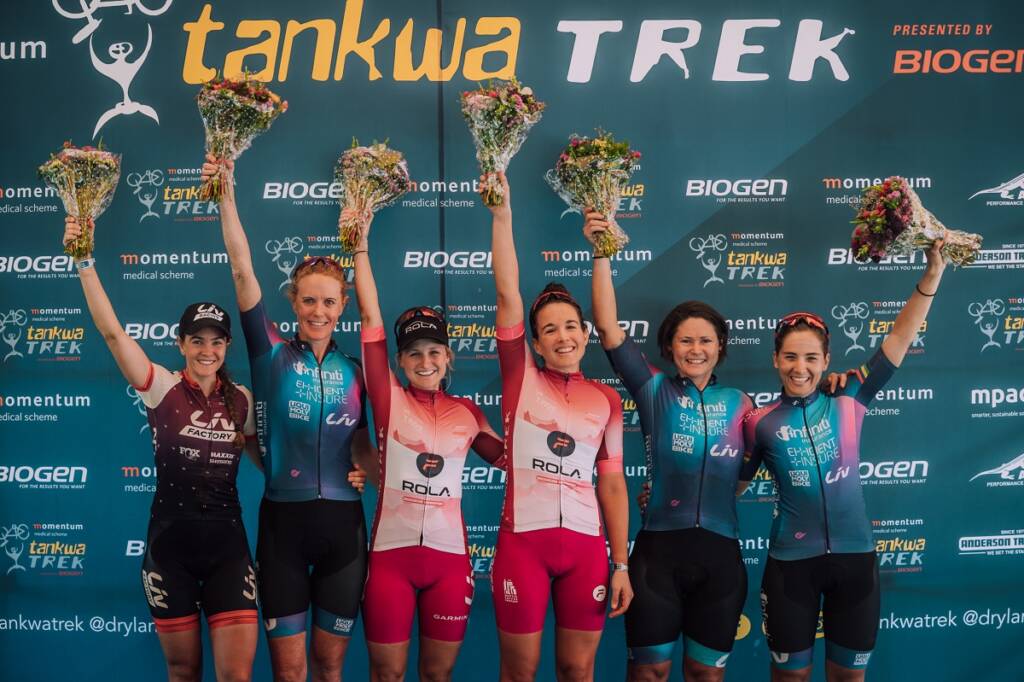 Please visit www.tankwatrek.co.za to view the full results from Stage 2.