The overnight leaders, Cornērcard and Faces Rola, wrapped up their Momentum Medical Scheme Tankwa Trek, presented by Biogen, titles with stage wins on the final day. Nino Schurter and Filippo Colombo underlined their dominance in the Koue Bokkeveld with a comfortable victory. While Sunday, 6 February, saw Mariske Strauss and Candice Lill complete their clean sweep of stage honours. 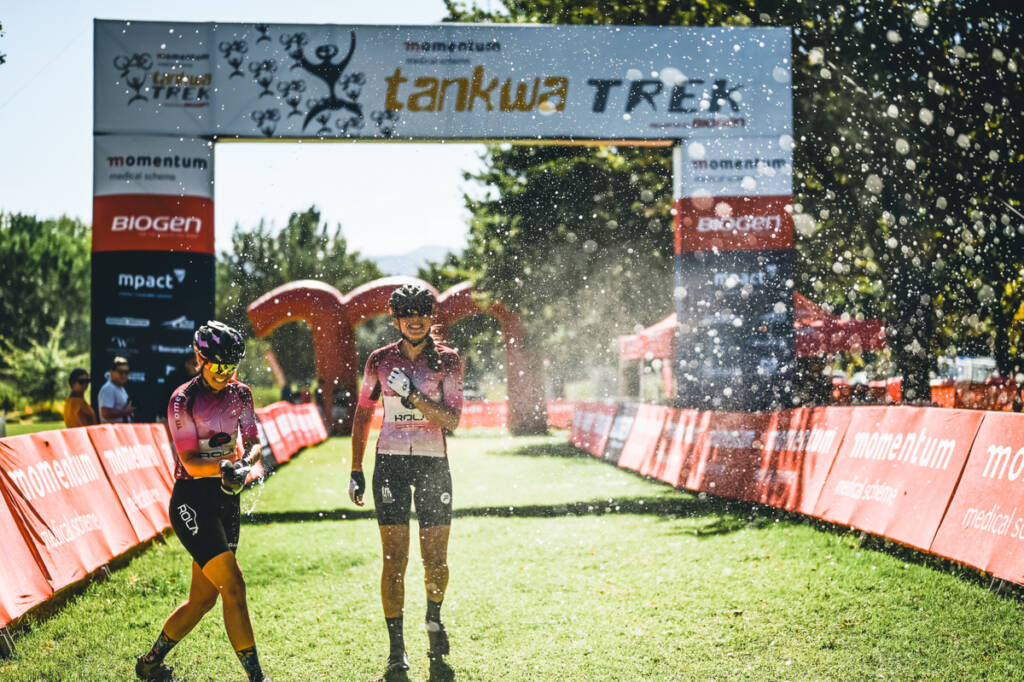 “We got away from the rest of the elite women’s field pretty early on and decided to just race the last stage as hard as we could” Lill revealed. “The last stage was anything but easy though. The climbs were punchy and there were a few long sandy stretches. But like a lot of the riding around here there were some amazing rocky trails too. It was tricky, technical and rocky. Which we love!” 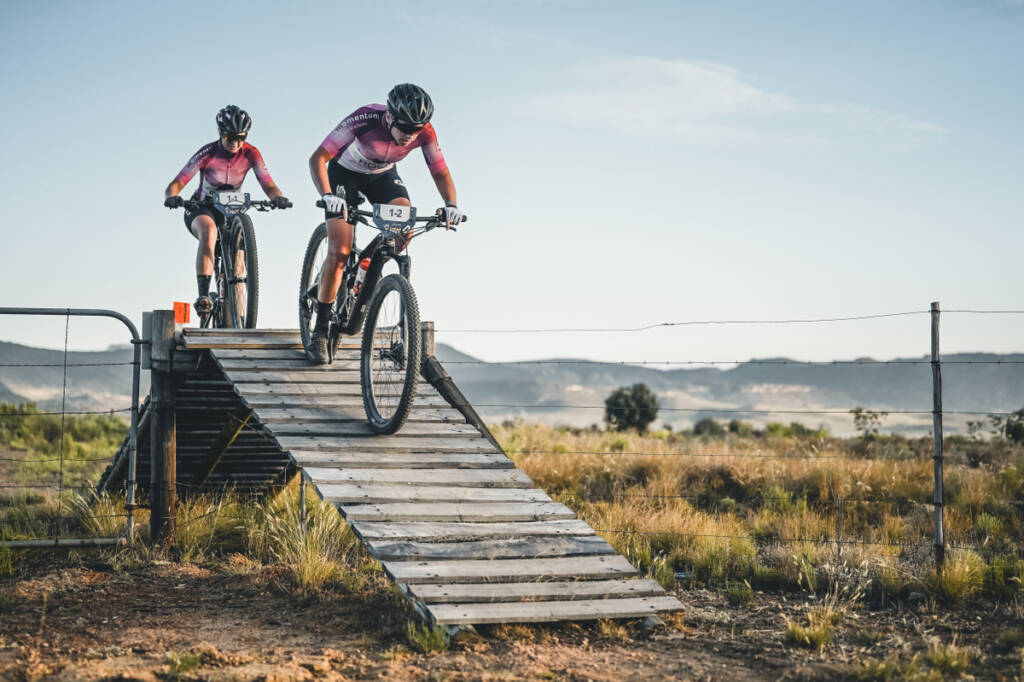 “You don’t get riding like this anywhere else and it’s impossible to replicate in training” the South African XCO Champion added. “It’s a great boost for the rest of the year to start the season with a victory here at the Momentum Medical Scheme Tankwa Trek, presented by Biogen.” 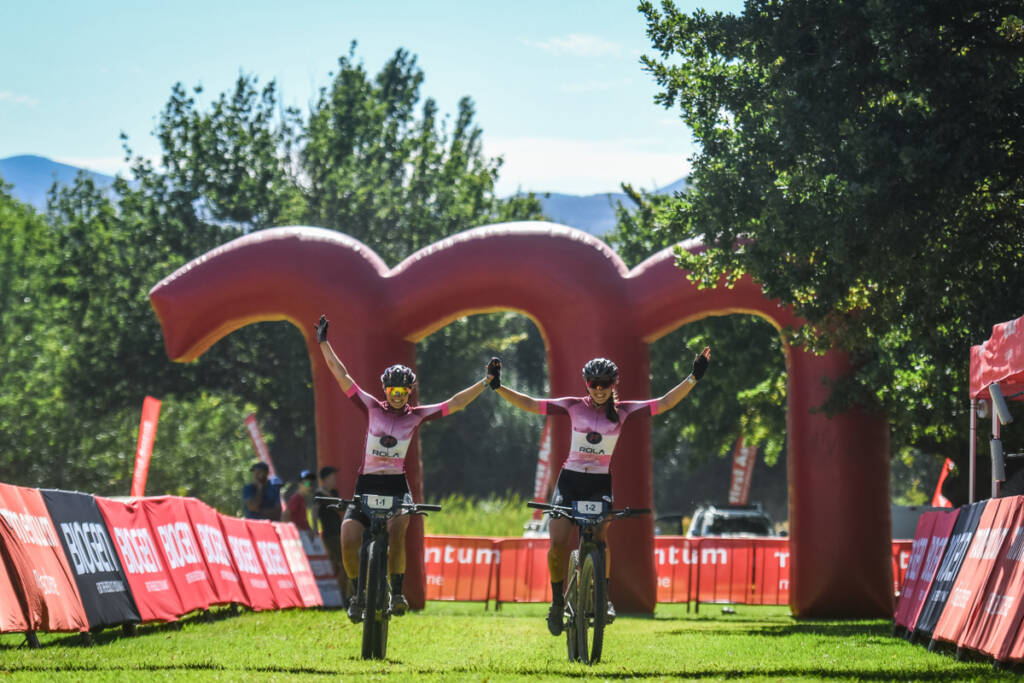 Mariske Strauss (left) and Candice Lill (right) completed a perfect Momentum Medical Scheme Tankwa Trek, presented by Biogen, performance. Not only did the Faces Rola team win all four stages but they also claimed the Anderson Transport Queen of the Mountain prize on the Queen Stage. Photo by Sage Lee Voges / www.zcmc.co.za.

Lill and Strauss’ four stage wins ensured that they finished well up on their general classification rivals. After a fiercely contested battle for second, on the opening stage, Sarah Hill and Theresa Ralph steadily rode themselves into a convincing second position overall. “It was great racing with Sarah again. She’s on terrific form at the moment and really took good care of me this weekend” Ralph praised. 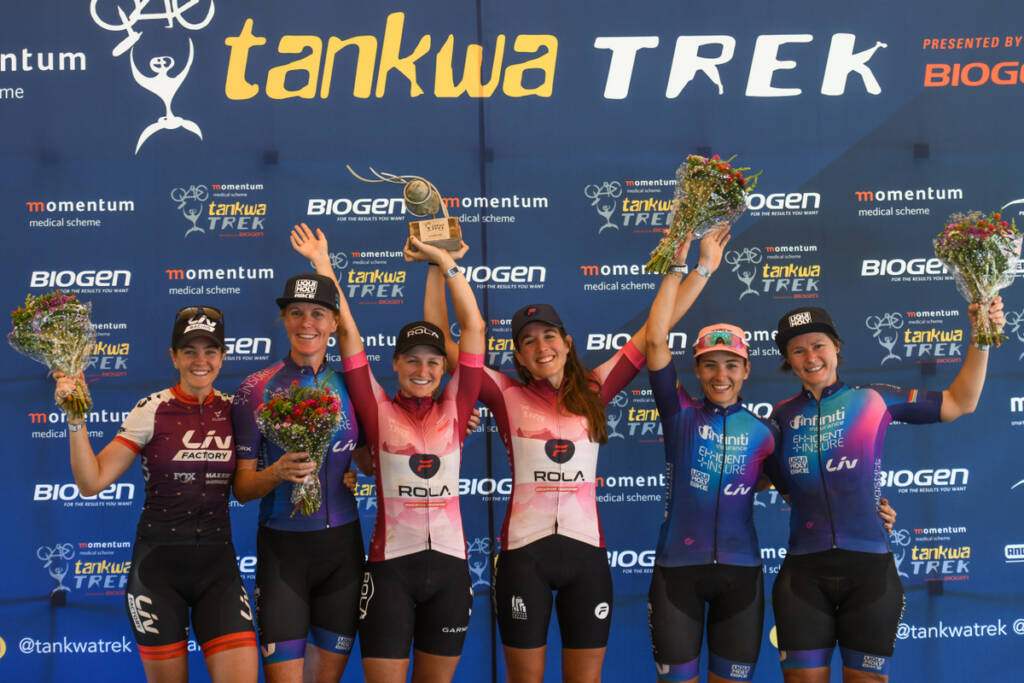 With Liv Cycling South Africa standing on the second step of the podium, below Faces Rola, the final spot was claimed by Efficient Insure Infinity Racing. Making her comeback from nearly a year off racing Samantha Sanders finished the four days stronger than she started and can use the event as a solid base from which to launch her return to competitive form. She and Kim le Court proved a dynamic partnership, which is sure to grow in confidence and results as the year progresses. 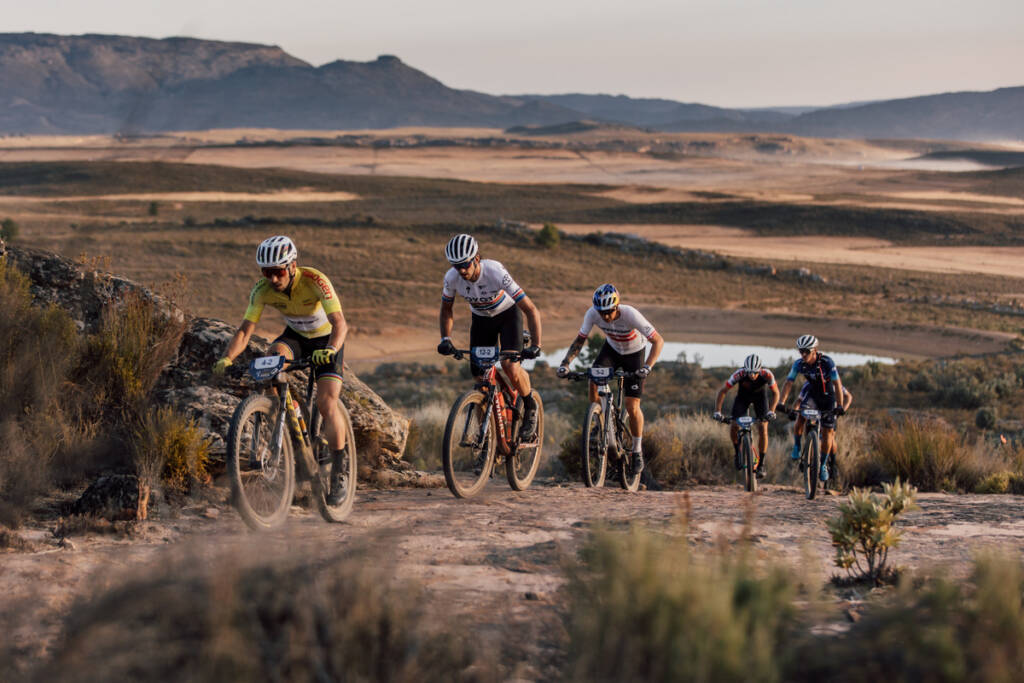 Nino Schurter’s all-round prowess put his rivals on the back foot for much of the race. Photo by Ewald Sadie/Shift Media Co.

In the men’s race, there were no free passes on the final stage. “It might have looked easy on paper but if definitely wasn’t in reality” Wessel Botha puffed after the race. “Okes were like sharks out there” Matt Beers laughed. “Every time anyone sensed blood the speed doubled. It was a very tough final stage.” 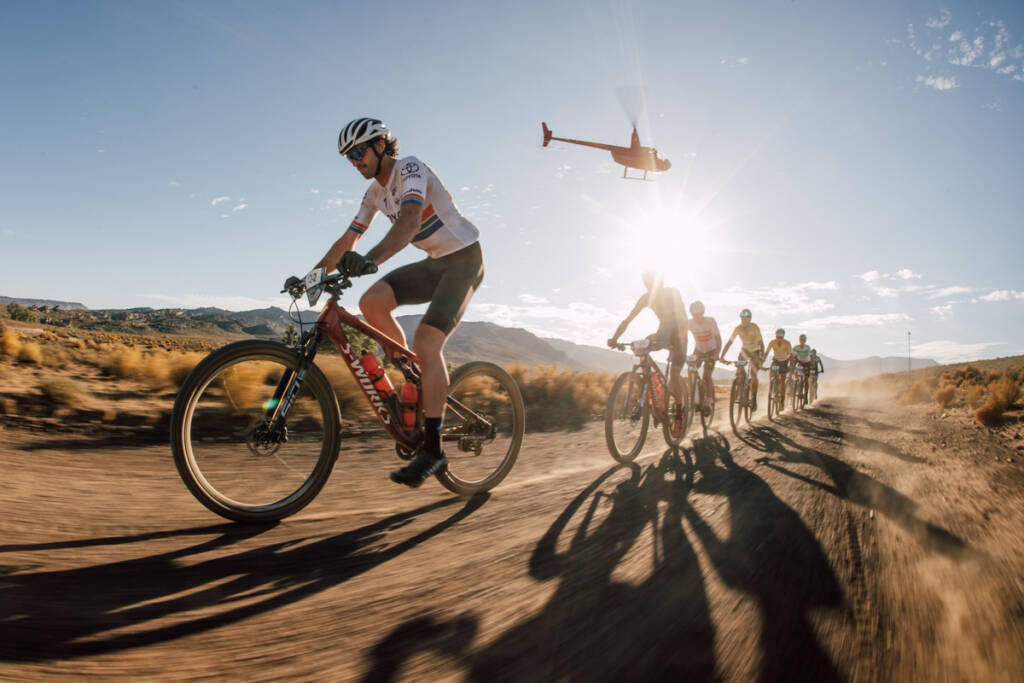 Matt Beers’ power on the flats was a constant threat to the Cornércard team. On the final stage he neutralised two of the men in yellow’s moves by pulling the group back to the leaders. Photo by Ewald Sadie/Shift Media Co.

Beers played a significant part in making the stage difficult. As did the cross-country specialists, Schurter, Colombo, Alan Hatherly and Simon Andreassen. “It was like an XCO race today” Schurter smiled. “Every climb was full gas and there was no let-up on the descents or flats. Especially when Matt went to the front.” 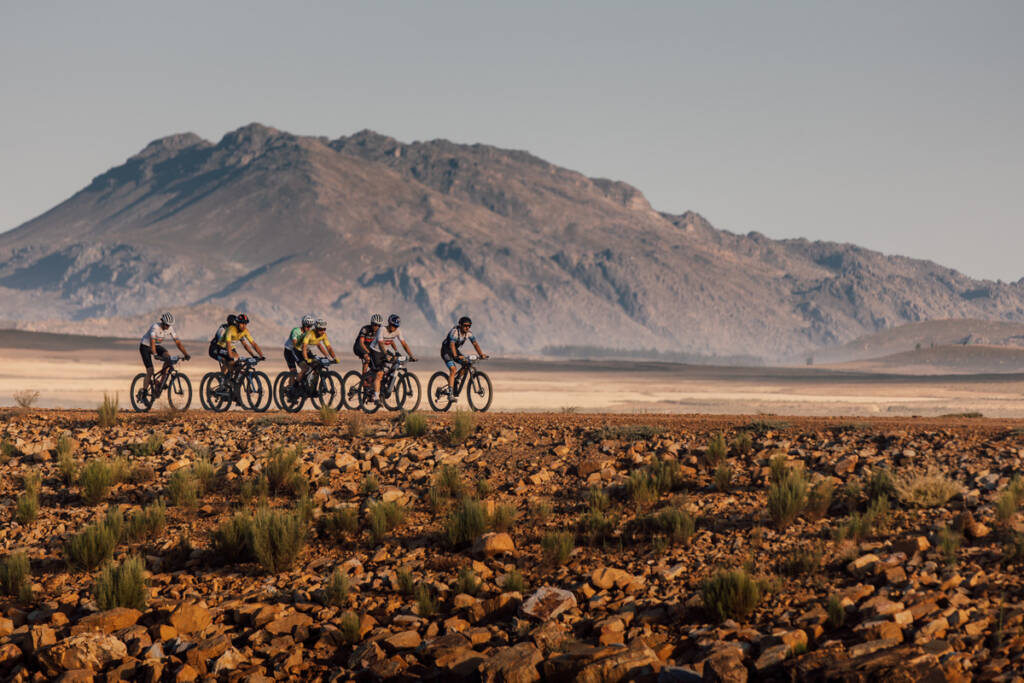 The final stage of the race saw the Cornércard team joined at the sharp end by Toyota Specialized, Cannondale Factory Racing and Imbuko {type}DEV equipped by Giant. Photo by Ewald Sadie/Shift Media Co.

“We tried a few times to get away, but it was difficult to make a decisive move with the undulating terrain” the Swiss star explained. “Filippo got a piece of string wrapped up in his rear wheel just as the pace was really starting to increase for the finale. Fortunately, we only lost 20 seconds or so and we were able to close the gap. Then on the final climb, we put in an attack and got a little gap which we could hold through the final singletrack.”

“If you have the lead you have a big advantage coming into this finish chute” Shurter continued. “So, we were able from there to enjoy the victory. It was a tough four days of racing. But it was good to see how the winter’s training has gone in a race situation.” 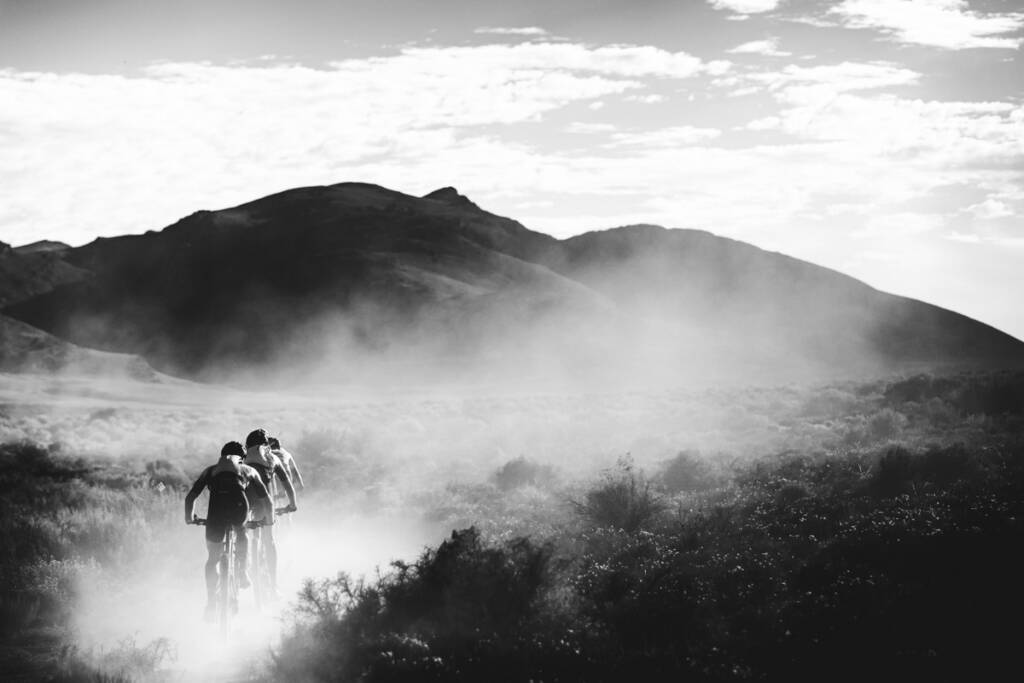 The dry and dusty conditions, on Stage 4, made for dramatic visuals and challenging racing. Photo by Ewald Sadie/Shift Media Co.

Schurter and Colombo’s acceleration could only be followed by Alan Hatherly. The sprint for the minor places behind the stage and race winners thus came down to the Imbuko {type}DEV equipped by Giant team and Simon Andreassen. “I know Simon is a weapon when it comes to placing himself for a sprint” Hatherly noted. “I was happy to leave him to it and he came through to ensure we claimed second today.” 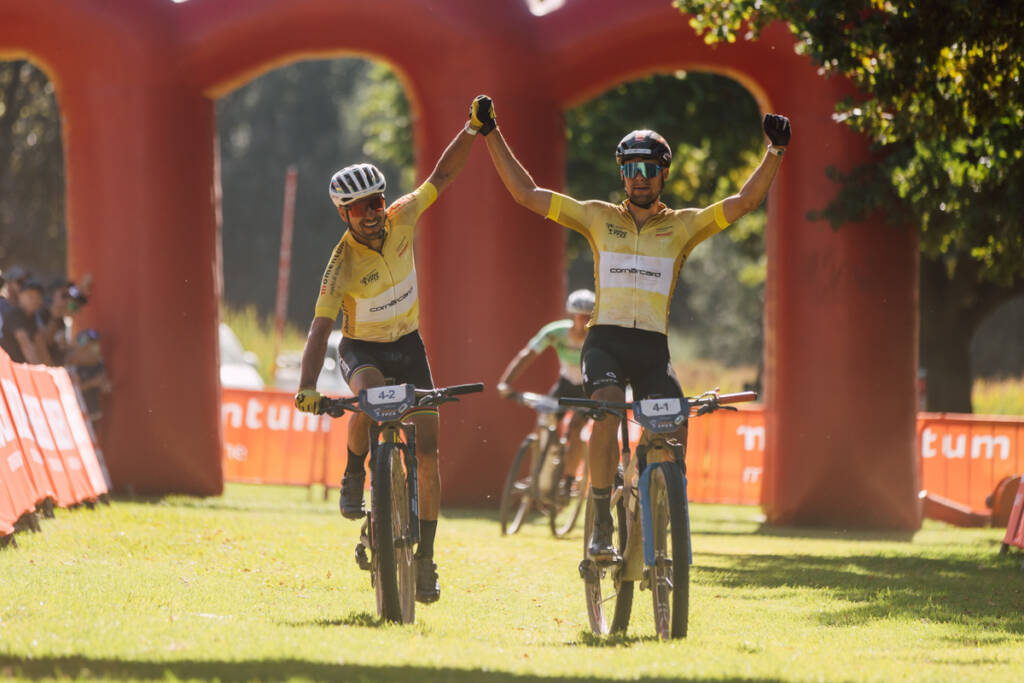 Botha and Marco Joubert had to settle for third on the stage, but the result was more than good enough to ensure they remained in third overall. Beers and Tristan Nortje slipped a few seconds off the pace in the final kilometres but remained in second on the final general classification. “We knew we had a good buffer to the Imbuko {type}DEV equipped by Giant guys” Nortje reflected. “That’s not to say we took it easy through the last singletrack. But we just knew we didn’t have to stress. The Momentum Medical Scheme Tankwa Trek, presented by Biogen, has been amazing. It’s been tough, especially Stages 1 and 2, but I’ve got some good memories to take from the race and lots of reasons to be positive.”

The Cornērcard team’s stage winning time was 2 hours, 37 minutes and 7 seconds. This ensured that their general classification victory margin was 5 minutes and 47 seconds over Toyota Specialized. Botha and Joubert were a further 6 minutes and 29 seconds behind Beers and Nortje. The women’s margin of victory underlined Strauss and Lill’s dominance. The Faces Rola pair were an hour ahead of Liv Cycling South Africa after the four stages. 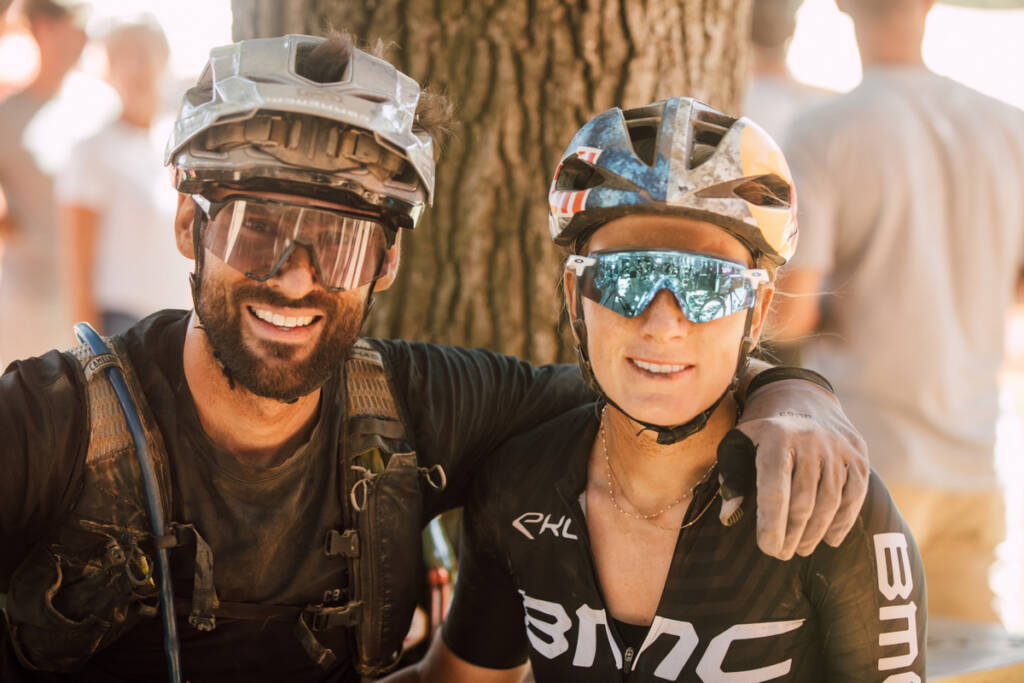 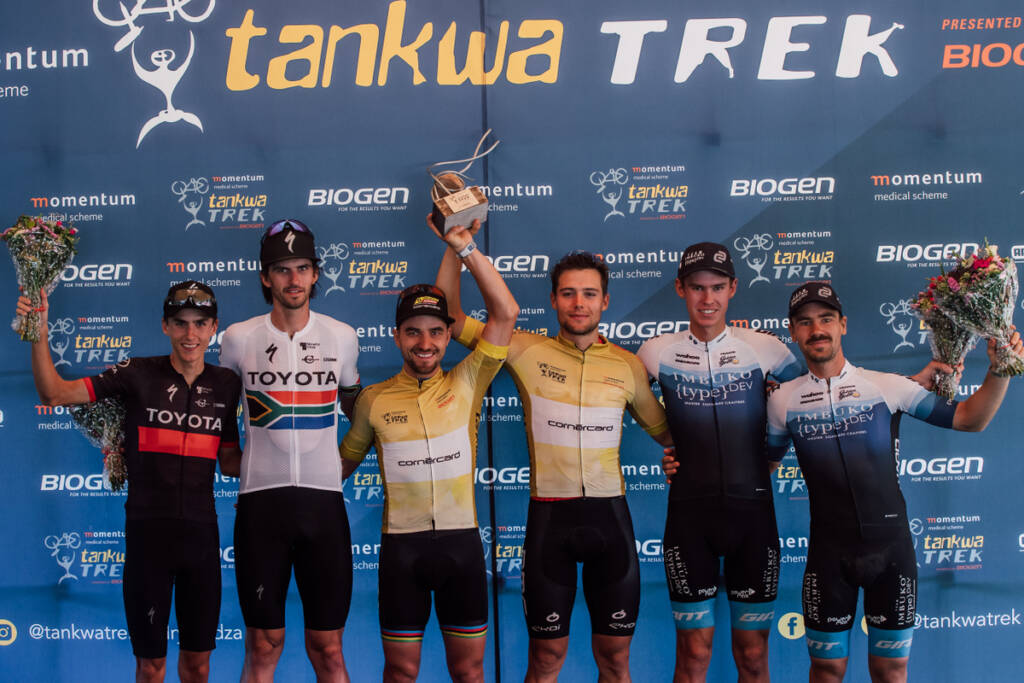 Please visit www.tankwatrek.co.za to view the full results from Stage 4.