Imbuko {type}DEV A and Efficient Insure Infiniti Racing wrapped up the 2022 Momentum Medical Scheme Cape Pioneer Trek, presented by Biogen, titles in Oudtshoorn on Saturday, 10 September. Both the men in the yellow First Ascent leaders’ jerseys and the women in pink suffered punctures on Stage 6, but could rely on the buffers they had established over the preceding six days to avoid panic. Thus, despite losing out on stage honours, to Insect Science Pro and MadMacs Coopetto Bester Performance respectively, the overnight leaders were able to secure the general classification victories.

Despite featuring only 1 150 metres of climbing, in its 65 kilometre distance, the final stage of the race was always going to be a challenging one. Mountain bikers who have ridden the Momentum Medical Scheme Attakwas Extreme, presented by Biogen, know all too well how rugged Chandelier Game Reserve is. The steep climbs and rocky descents provided the terrain for Marco Joubert and Pieter du Toit’s attack, but also nearly provided their undoing. 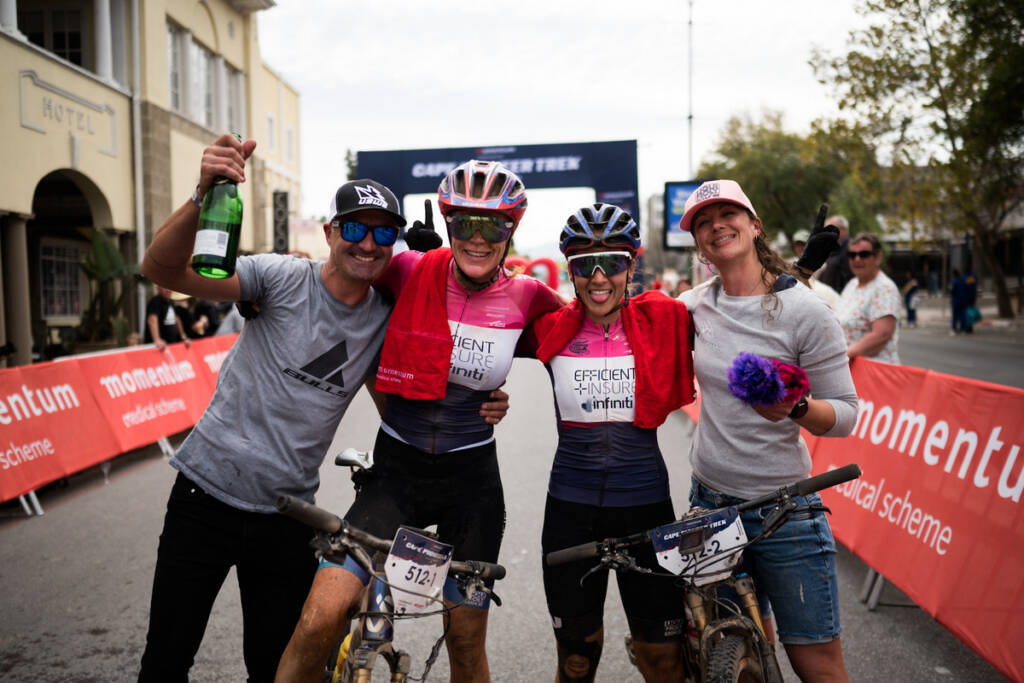 A fast start, driven on initially by Pieter du Toit and then Insect Science Pro’s Arno du Toit initially distanced Valley Electrical Titan Racing’s Matthew Keyser. Then Rudi Koen, of Imbuko {type}DEV B, punctured. Koen’s puncture removed Imbuko {type}DEV’s numerical advantage. “We managed to get rid of Marco [Joubert] and Pieter [du Toit’s] rolling spare wheels,” Arno du Toit joked. “But then we couldn’t exploit that because Marco got out the measuring tape and put us in our place.”

Joubert’s attack on a rocky climb distanced the Insect Science Pro combination and set Imbuko {type}DEV A up to seal their overall victory with a stage win. In mountain biking, a sport where clichés often ring true, the race is never over until one crosses the line. Joubert and Pieter du Toit nearly fell afoul of the old adage. With 20 kilometres to race and a 1 minute 46 second lead on the trails Pieter du Toit punctured. 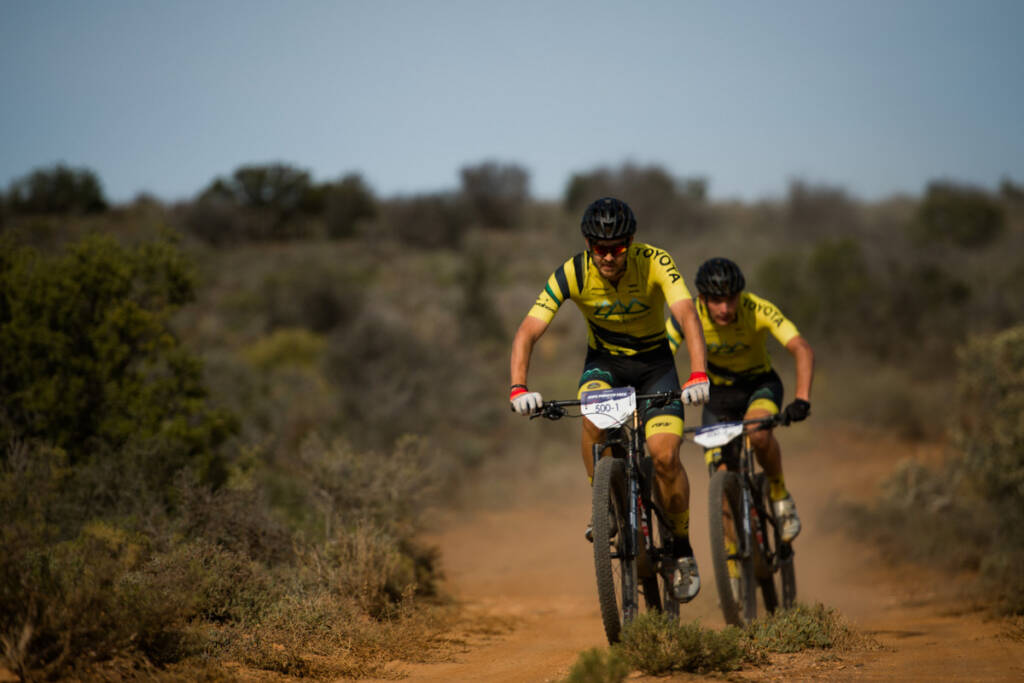 Arno du Toit and Keagan Bontekoning raced the final stage as they had every other, with everything they had in an attempt to overhaul Imbuko {type}DEV A. Photo by Justin Reinecke for zcmc.co.za.

Insect Science Pro, who had thought their hopes of victory were dashed rode by while the race leaders were attempting to repair the puncture. They upped their tempo to a sprint and maintained it all the way to the line, eking out every second they possibly could.

“I don’t know what I hit, we were on a smooth gravel road, but it made a 3 centimetre hole in my sidewall,” Pieter du Toit explained. “Fortunately Wessel [Botha] and Rudi [Koen] came past and Wessel gave me, or maybe I just took, his wheel. From there it was full gas to the finish, but we knew the situation was under control.” 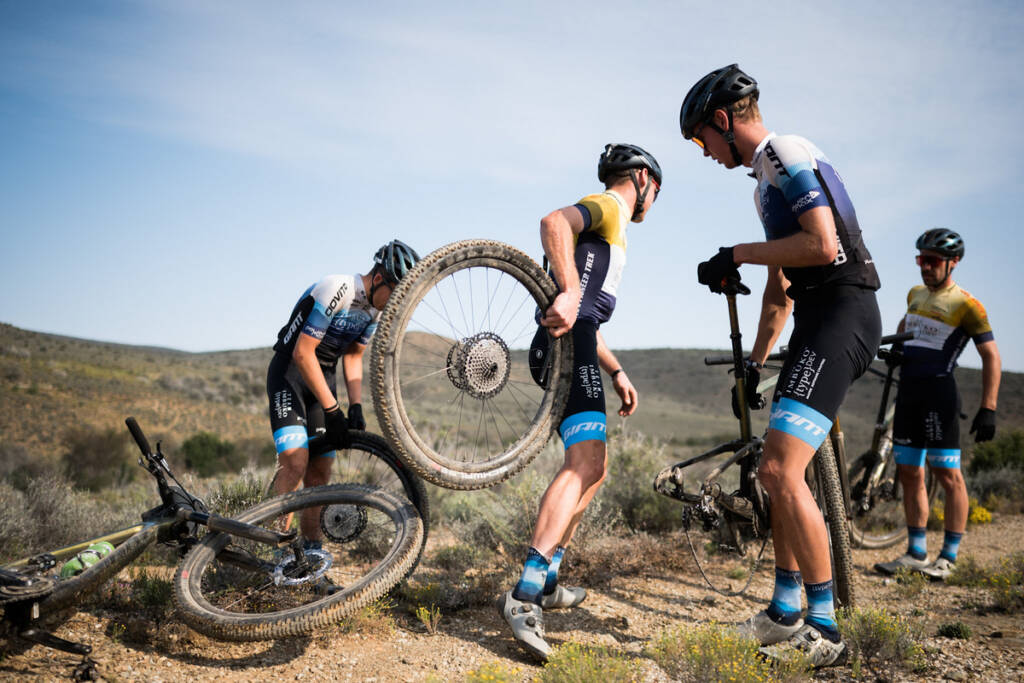 Having punctured earlier themselves, Rudi Koen and Wessel Botha had to sacrifice a wheel to Marco Joubert and Pieter du Toit so the leaders could secure the overall victory. Photo by Justin Reinecke for zcmc.co.za.

Arno du Toit and Keagan Bontekoning reached the Queens Hotel and the final finish line in a time of 2 hours, 24 minutes and 30 seconds. This was 2 minutes and 16 seconds faster than Joubert and Pieter du Toit, but that still left Imbuko {type}DEV A with a 2 minute and 21 second general classification lead. Thus, the men who started the day in yellow also finished it atop the final podium.

They were joined on the day by the Valley Electrical Titan Racing team. While the overall men’s podium was completed by the Imbuko {type}DEV team of Botha and Koen. Keyser and Kruger had to be content with fourth overall; while the KMC team, of Gerben Mos and Teus Ruijter completed the top five placings. 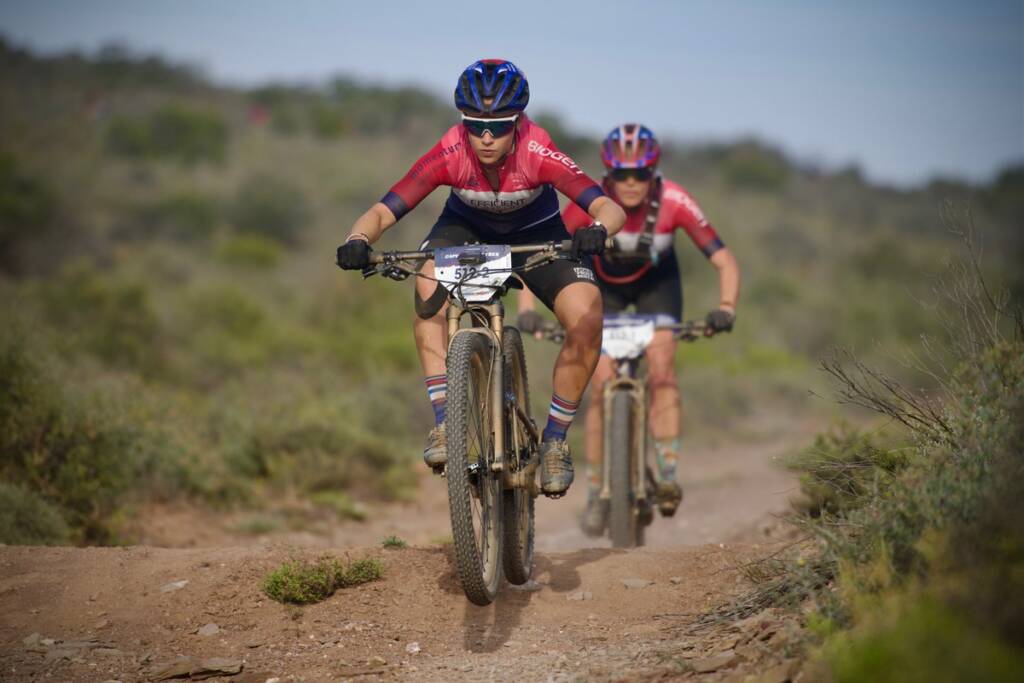 In the women’s race the final stage also provided some drama, though with a 32 minute overall lead it would have taken a complete catastrophe for Kim le Court and Theresa Ralph to be dethroned. “We actually spoke about trying to see if we could give a stage victory to the Clickatell team,” Le Court recounted. “But that was clearly tempting fate and Murphy’s Law punished us with a puncture.”

The puncture cost the Efficient Insure Infiniti Racing combination the chance to cap their overall victory with a final stage win too. Yet that was of little concern for Le Court: “It’s been a great week racing with T [Theresa Ralph]. We worked well on the bike and had so much fun off the bike too. We were always laughing.” 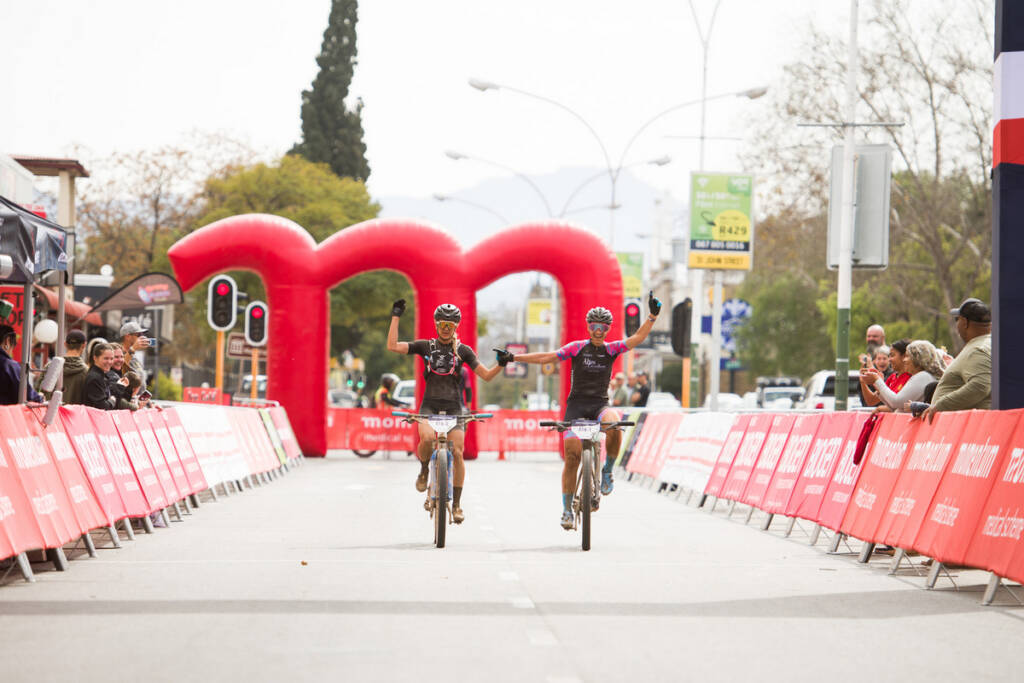 Stephanie Wohlters (left) and Yolande de Villiers (right) won their third stage of the race on the final day of the 2022 event. Photo by Justin Reinecke for zcmc.co.za.

Yolande de Villiers and Stephanie Wohlters won the final stage in a time of 2 hours, 56 minutes and 12 seconds, just 38 seconds ahead of Le Court and Ralph. The Clickatell team, of Ila Stow and Robyn Williams, were third for the sixth time in the race. Stage 6’s results mean that Efficient Insure Infiniti Racing win the 2022 Race with Soul by 31 minutes and 44 seconds. The result is also a breakthrough one for the junior partner in the MadMacs Coopetto Bester Performance team. Wohlters signed up for the race five days before the start and still rode away with three stage wins and a second position alongside De Villiers. It could thus be a catalyst for her to catapult her riding to a higher level. Already Wohlters and De Villiers are planning for late season and early 2023 events.

They and the winning team were joined on the final general classification podium by Stow and Williams. The Clickatell women dominated the ‘fun racer’ division, though their battles with Action Cycles Scotrho Brokers and Echotel Communications teams kept the category interesting. Nicola Freitas and Juanita Mackenzie were the next best-placed combination, while Tarryn Povey and Kylie Hanekom had to be content with fifth. 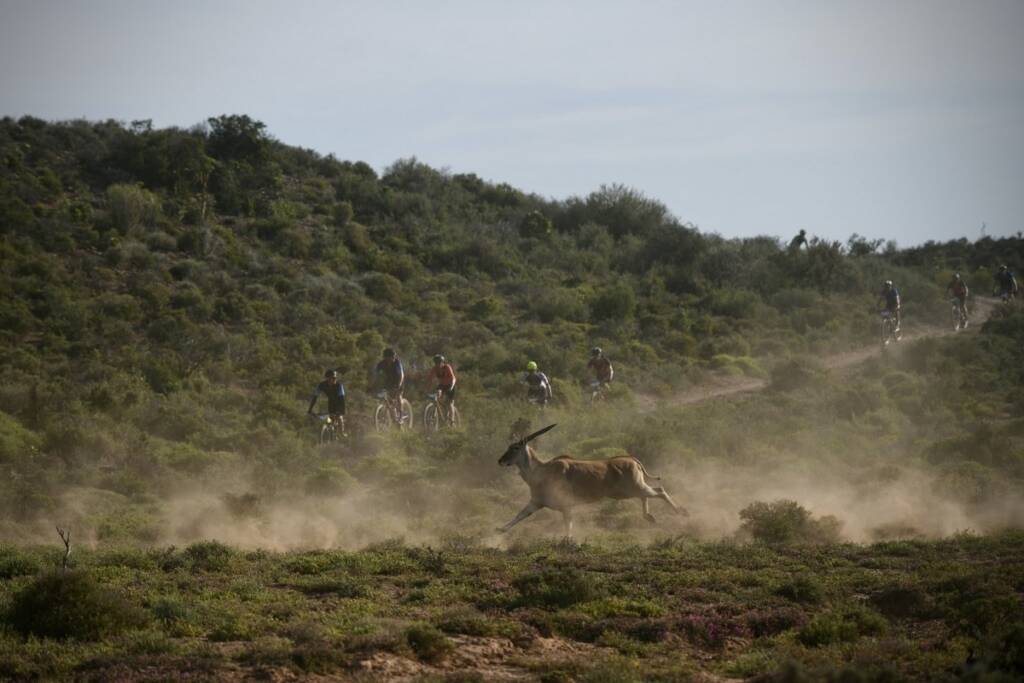 Chandelier Game Reserve provided wildlife thrills for the second day in a row as riders were treated to close encounters with eland, giraffe and springbok during the 65 kilometre stage. Photo by Sage Lee Voges for zcmc.co.za. 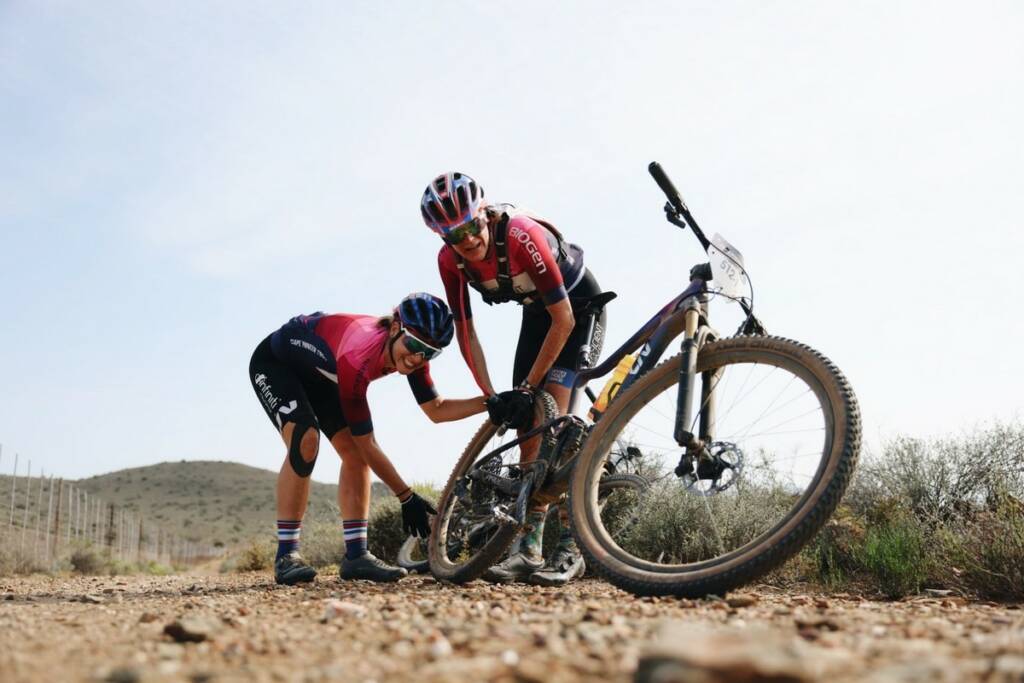 Kim le Court (left) and Theresa Ralph (right) had to fix a rear wheel puncture on Ralph’s bike in order to race to the Momentum Medical Scheme Cape Pioneer Trek, presented by Biogen, title. Photo by Erin Nel for zcmc.co.za. 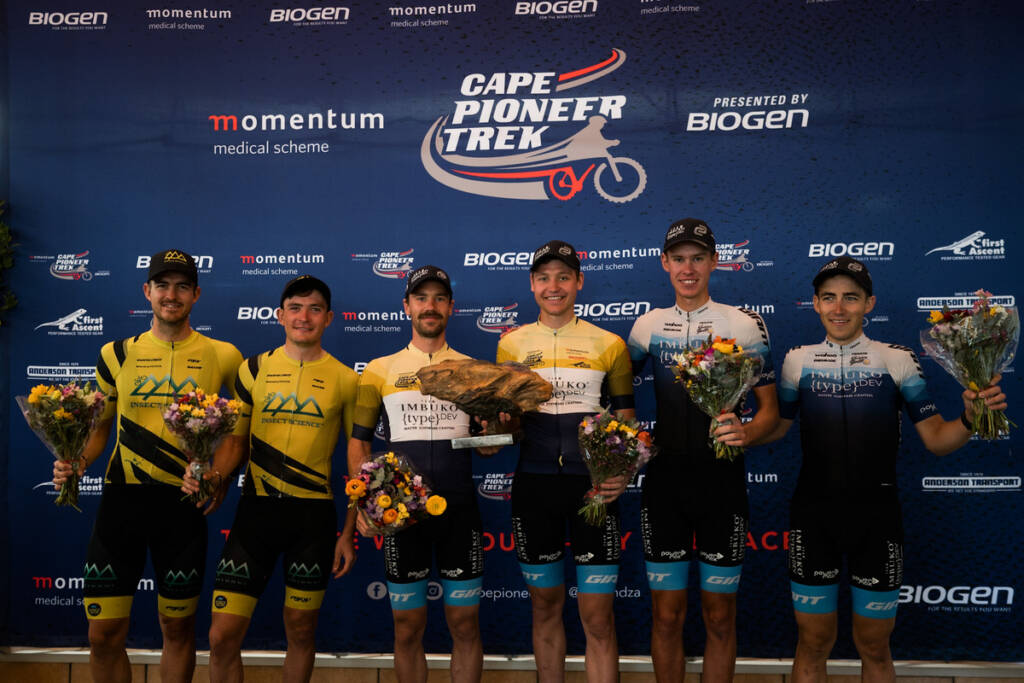 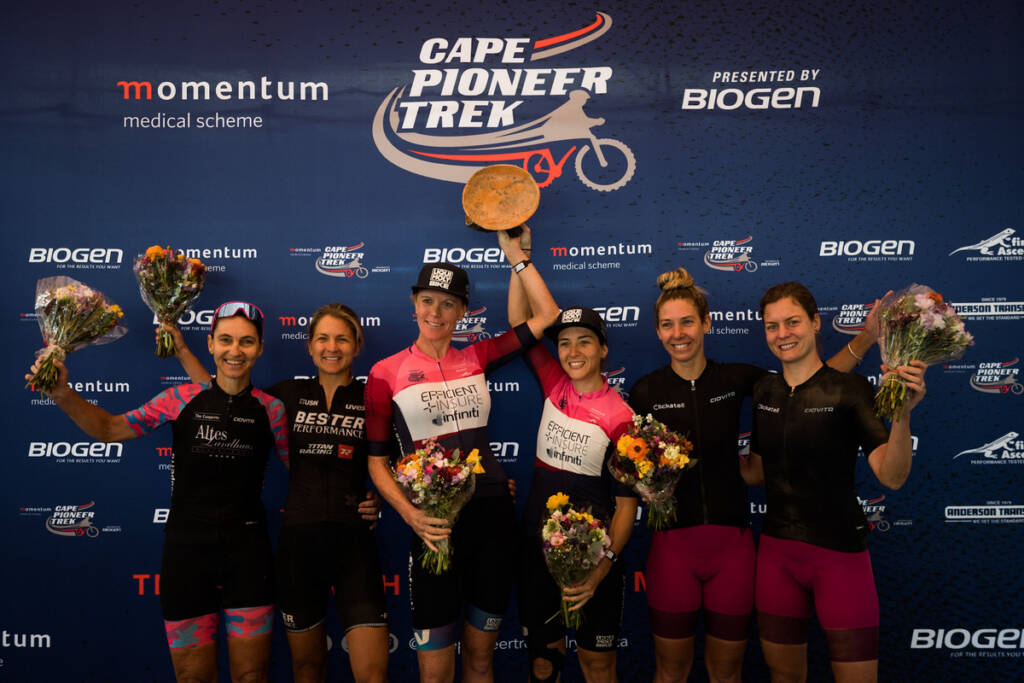 For the full results from the 2022 Momentum Medical Scheme Cape Pioneer Trek, presented by Biogen, click here, or visit www.capepioneer.co.za. 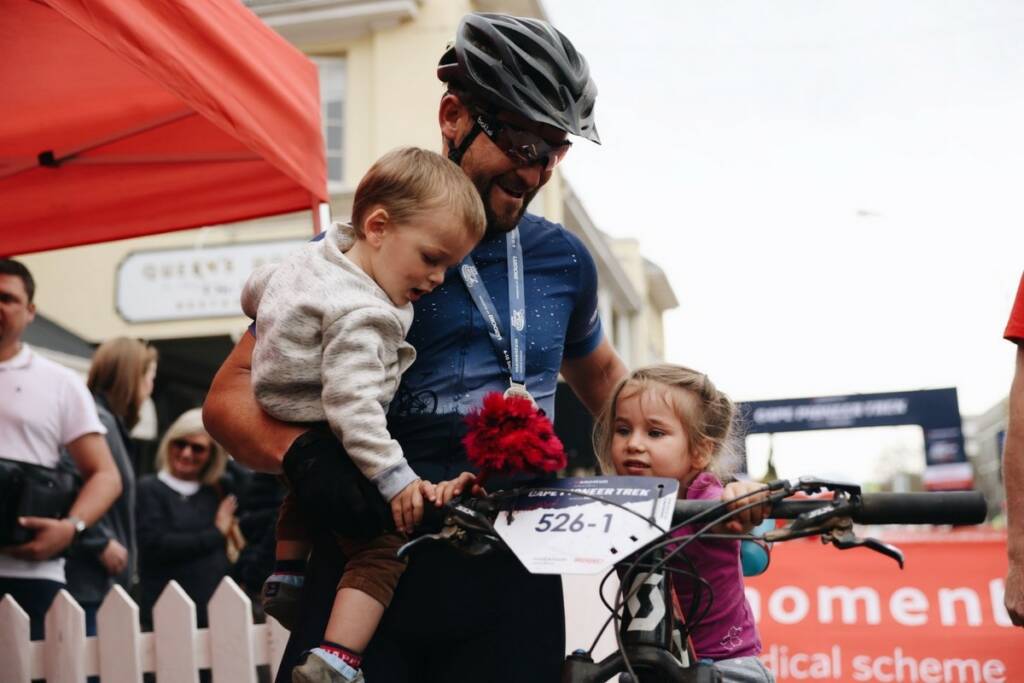 Ampie Calitz celebrates completing the Race with Soul with his children. Photo by Erin Nel for zcmc.co.za.