Toni McCann shattered the women’s Otter African Trail Run course record, setting a new benchmark time of 4 hours, 33 minutes and 26 seconds, on Saturday 8 October. The South African’s time was 6 minutes and 34 seconds ahead of the 4 hour and 40 minute mark, which earned her a R150 000 bonus from Easy Equities and Faces. It was also 4 minutes and 22 seconds faster than, her adidas TERREX teammate, Holly Page’s 2018 time. McCann was joined atop the podium by Johardt van Heerden, who missed out on a sub-4 by 5 minutes and 19 seconds.

The RETTO route, which traverses the Tsitsikamma coastline from Nature’s Valley to the Storm’s River Rest Camp, is historically the faster of the two directions. So it proved once again, with Van Heerden and Kane Reilly flirting with the 4 hour mark for much of the race. From the first timing point McCann was well up on her target of 4:40 though and she only sped up over the second half of the course. 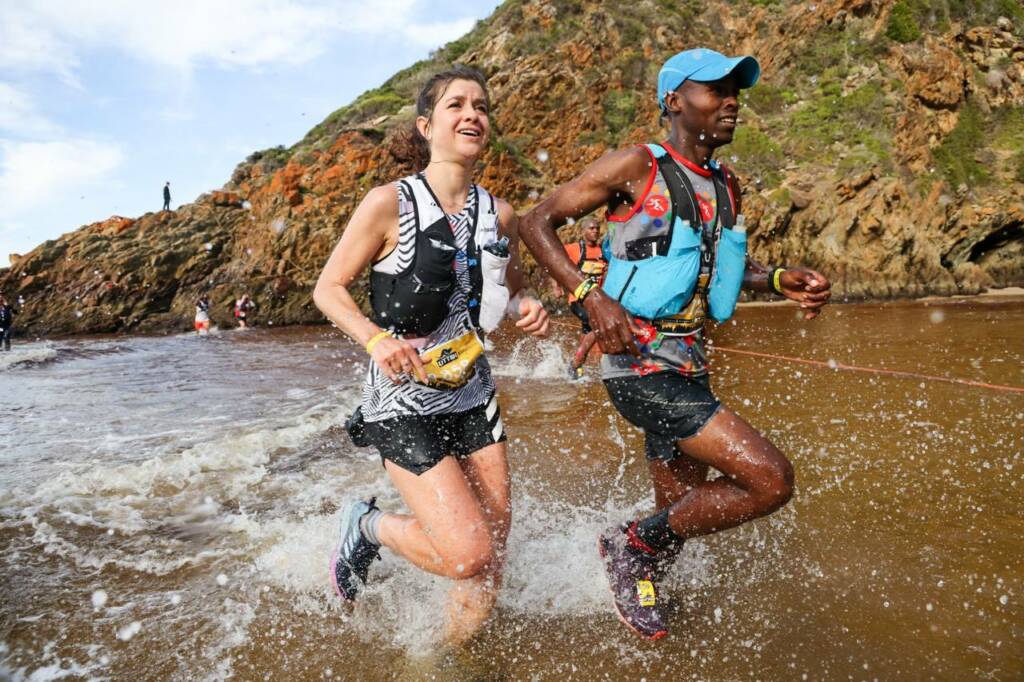 Having passed through the first two time checks in seventh position she upped her tempo through the KAUAI Munchie Point near the halfway mark. There McCann was fifth on the trail. She crossed the finish line in fourth; just over 3 minutes behind the third placed man, Robbie Rorich. 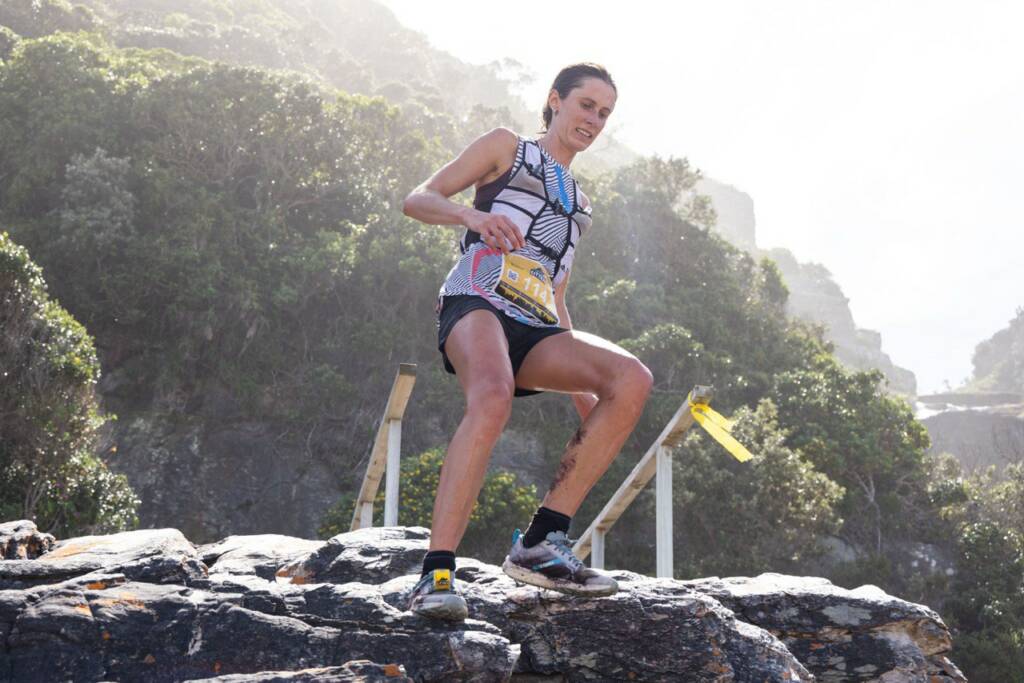 Bianca Tarboton reported having a bad day on the trails, but still managed to clock a very creditable 4 hours, 54 minutes and 15 seconds over the 42 kilometre course. Photo by Caleb Bjergfelt.

“I felt terrible throughout, to be honest,” she laughed. “It’s a bit of a chicken and an egg situation. I don’t know if I felt bad because I was running hard or bad because I felt bad. I think it was the former though. I sat with that discomfort and really pushed, I fuelled well and maintained good hydration, so I’m super happy with how today went; even though I felt terrible.”

“It’s so special to run into a crowd of people that I know,” McCann added. “I’ve run overseas but nothing beats this. UTMB is special, the crowds are huge, but this is special. This is my home turf. And nothing beats that!” 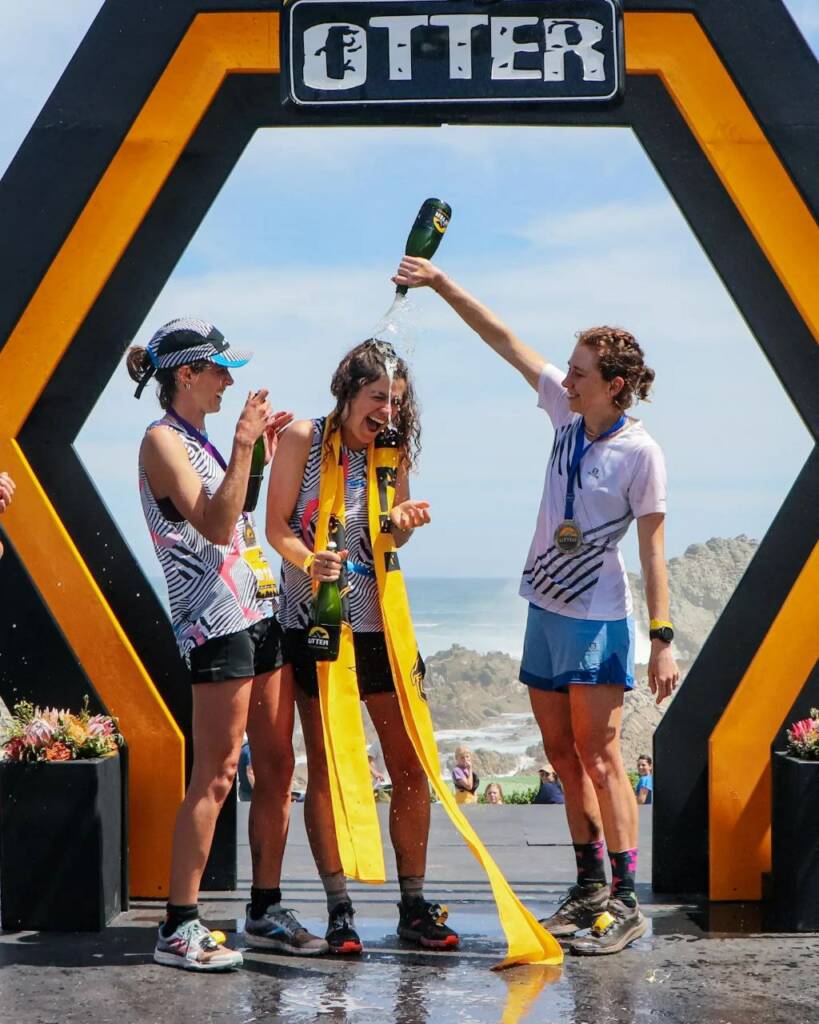 McCann was followed home by the 2021 Otter African Trail Run winner, Bianca Tarboton. Tarboton reported having struggled with the heat and never really got going well enough to challenge the 2022 champion. She still managed a very credible 4 hours 54 minutes and 15 seconds. Marzelle van der Merwe rounded out the women’s podium and took it upon herself to douse McCann in MCC in a fitting celebration of the newly crowned record holder’s winning run.

In the men’s race the battle between Van Heerden and Reilly came down to the final 5 kilometres. After running together for the first 37 it was only on the approach to the Ngubu hut that Van Heerden made his move. “It was great running with Kane [Reilly]. He was probably stronger from Muncie Point to Scott, when I was struggling a bit. He was motivating me a bit even, because it’s always better running together,” Van Heerden said. “Just before Ngubu, on one of the small climbs I said to Kane, ‘let’s make turns again.’ I wouldn’t say I attacked and I wasn’t feeling particularly good, I think the elastic just snapped and I was able to hang on to the finish.” 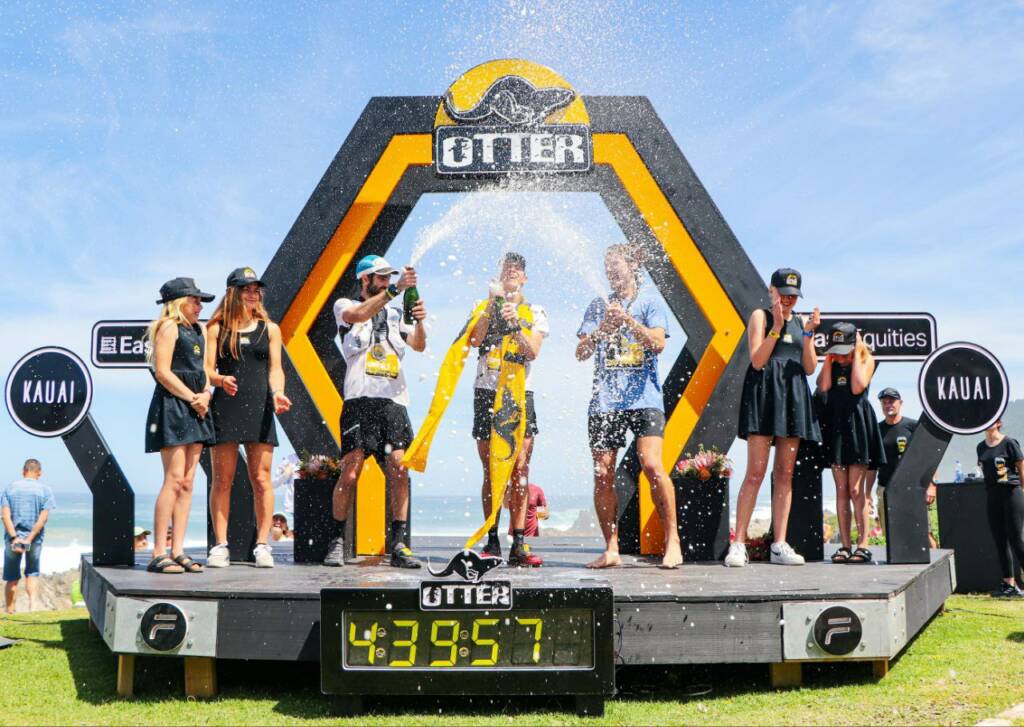 “It’s always lekker at Otter,” the now three-time winner smiled. “It was a tough day out there. The conditions were very hot and humid from the start. It was actually cooler in the forests.” The heat played its role and slowed Van Heerden over the final few kilometres. Though he and Reilly were initially on target for the 4 hour goal they gradually slipped off the required pace as the war of attrition took its toll. In the end the winning time of 4 hours, 5 minutes and 19 seconds was 1 minute and 39 seconds slower than his 2020 effort. It was still good enough for victory by 7 minutes and 12 seconds over Reilly. Rorich rounded out the men’s podium in a time of 4 hours, 29 minutes and 8 seconds.

In addition to the podium finishers there were 11 runners who dipped below the 5 hour mark, earning a black (for sub 4:30) or purple medal. A further 28 runners notched up a sub-6 hour finish and 48 more trail runners made it home in under 7 hours. Despite the hot and humid conditions the Otter African Trail Run entrants prevailed, putting months of dedicated training to the test and taking in the beautiful route. Those who watched from home, on the race’s social media channels, were hopefully inspired to take on the challenge in 2023. To test themselves against the Grail of Trail and experience one of trail running’s most scenic courses. 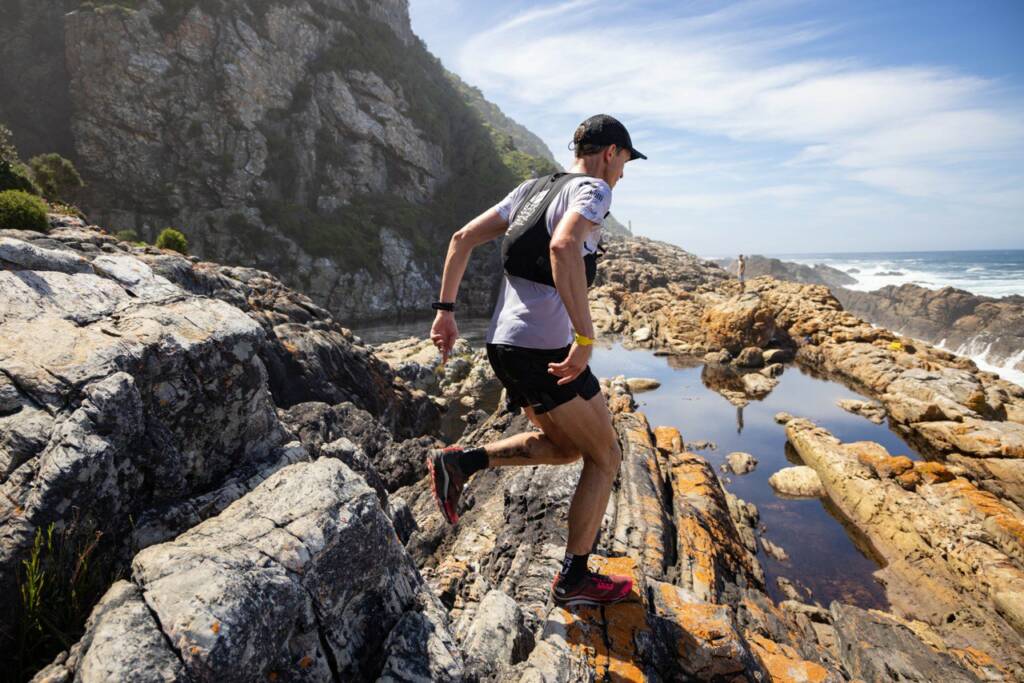 It was only in the final 5 kilometres that Johardt van Heerden was able to distance Kane Reilly to run his way to his third Otter African Trail Run title. Photo by Caleb Bjergfelt. 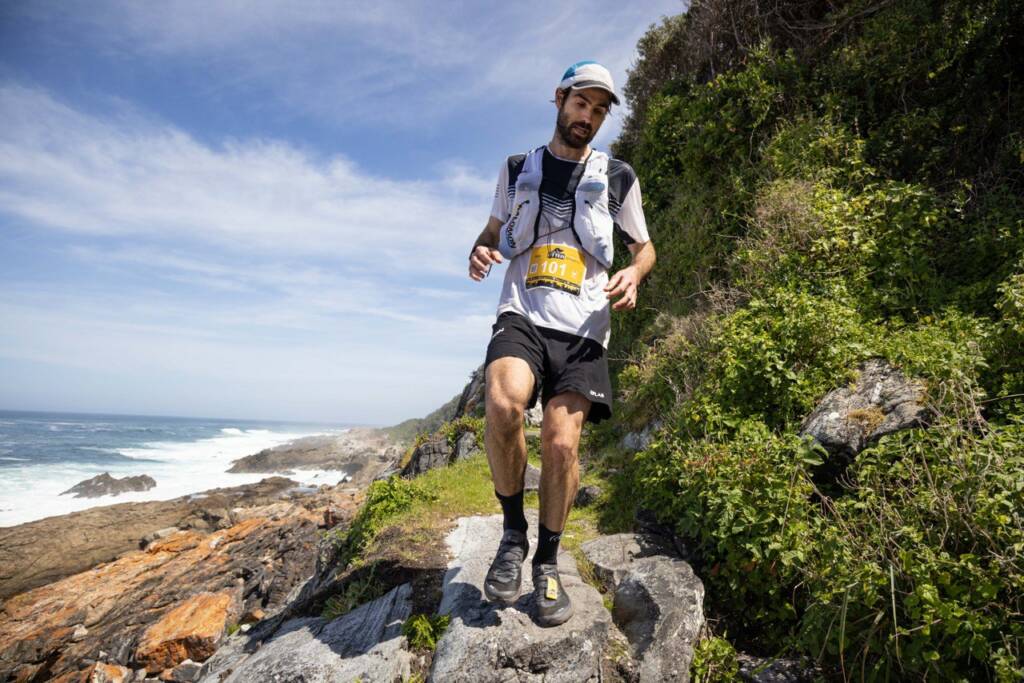 Kane Reilly had to once again settle for second at the Otter African Trail Run, despite having what he described as his best day on the trails in the ten years he has taken part. Photo by Caleb Bjergfelt. 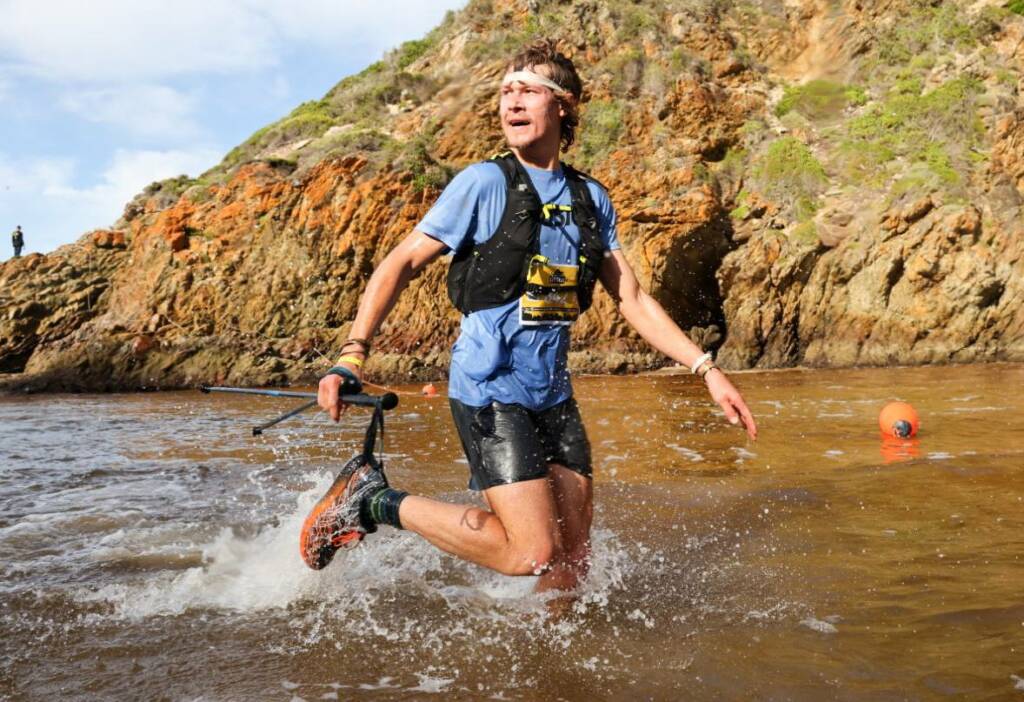 Robbie Rorich rounded out the men’s podium places after running the vast majority of the route solo, behind the leading duo but well ahead of the chasers. Photo by Caleb Bjergfelt.

For the full results from the 2022 Otter African Trail Run click here. 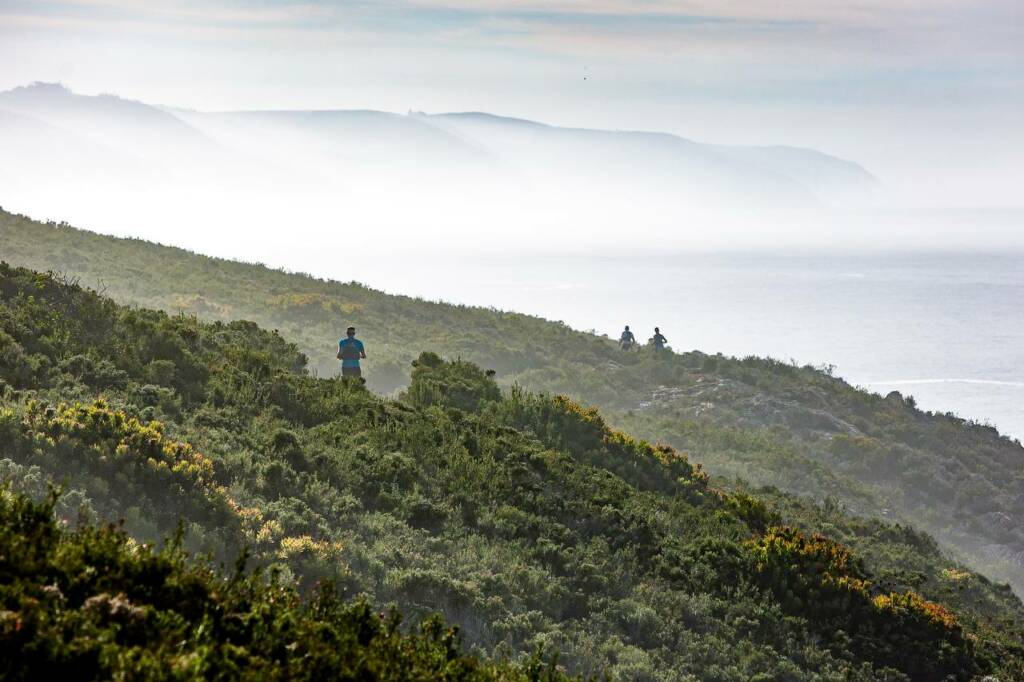 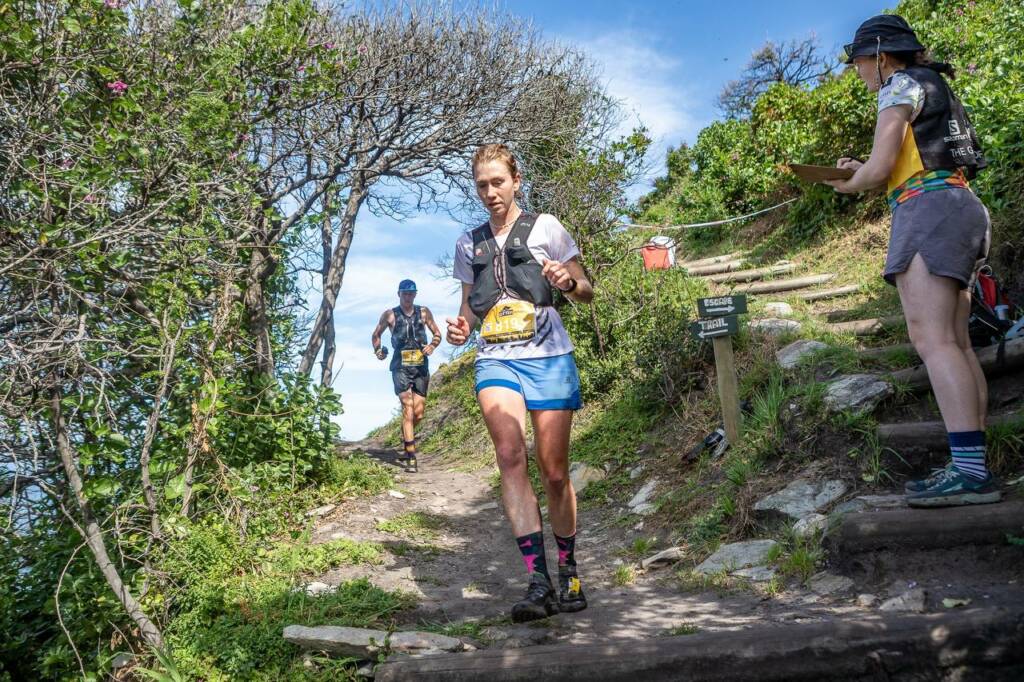 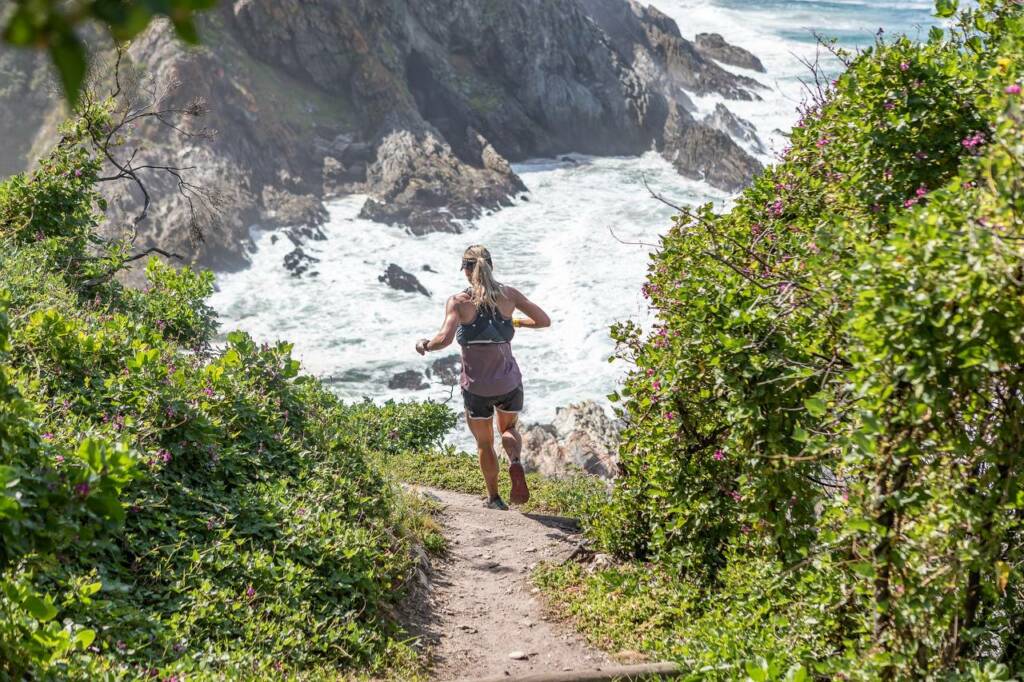 Nadia Jooste drops towards the KAUAI Munchie Point, near the half way point of the route. Photo by David Sullivan.