This year’s Great Optimist Race in conjunction with Boatica was a showdown of epic proportions as the wind dropped midway into the race, and skippers resorted to paddles, their hands, and dirty tactics with water weapons to get their boats across the finish line. 19-year old newcomer Hamilton Slater was the first sailor to complete the course, but the real winner at the end of the day was The Little Optimist Trust – and in turn the many charities supported by the Trust – as participating skippers and their sponsors raised a staggering R130,000 for needy children.

Slater, who took out two-time reigning champion Caleb Swanepoel, says “Fresh out of school last year I went straight into working at Ullman Sails. I’m having a ball working and learning within the sailing industry. I’d like to thank the Little Optimist Team for an outstanding event. And I’d also like to thank all the inspiring sailors that I met on Saturday. I can’t wait to see them all again next year!” 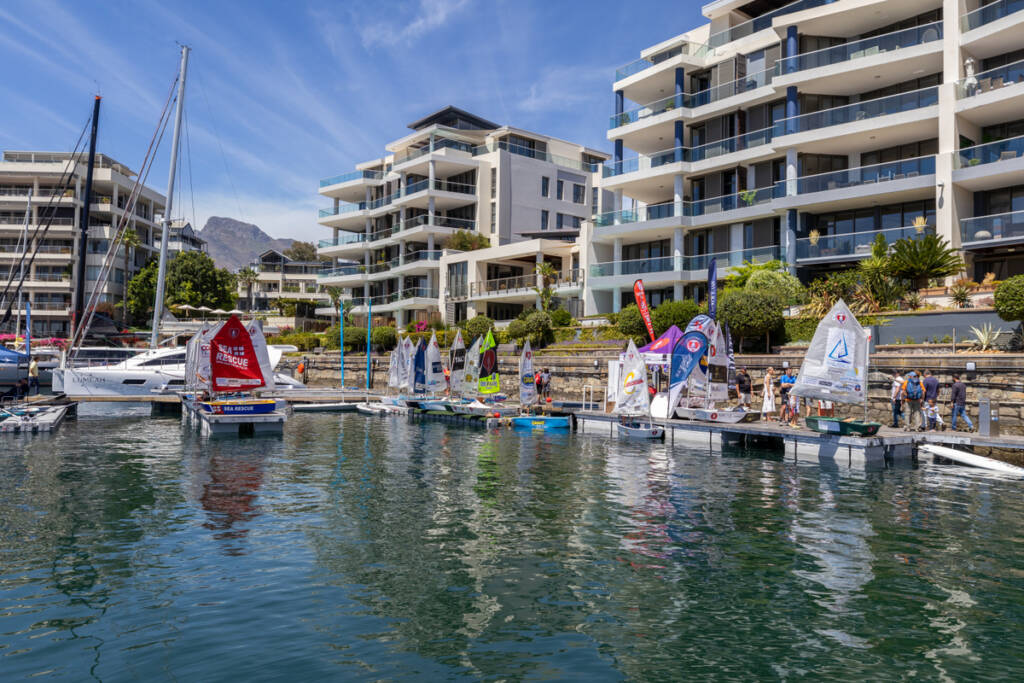 The 2022 Great Optimist Race was held in spectacular conditions at the V&A Waterfront, during the Botica boat show. Photo by Robert Whitehead.

Swanepoel, the shark attack survivor who lost one of his legs 4 years ago, won the inaugural race in 2018 and again in 2019. But this year he had to settle for third place, behind veteran sailor Nico Van Wieringen.

The day wasn’t without drama as accomplished waterman Sibu Sizatu almost capsized his optimist dinghy. Sizatu says, “I tried to do a row tacking forgetting I was too big for the boat to manoeuvre quickly so got stuck on the leeward side, and my life jacket hooked on the boom”. 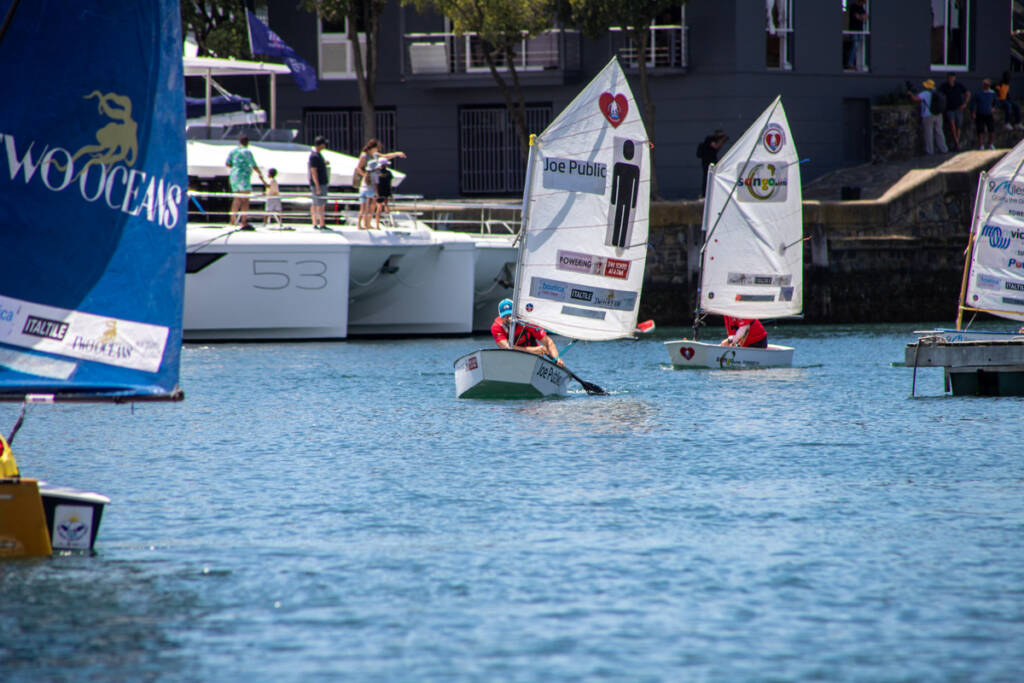 The racing was highly competitive. Photo by Robert Whitehead.

Sizatu who will be sailing in the Cape-To-Rio in a few months wasn’t prepared for the mischief that played out on the water: “The biggest lesson I learned from the race is always expect the unexpected. When I agreed to sail I had no clue there would be paddling, and almost called for a protest when I saw two boats paddling. But when I looked back, the whole lot were paddling! I loved the atmosphere and the synergy though.” For organiser and founder of the Great Optimist Race Greg Bertish, the event was always about the children he aims to help. “The Great Optimist Race 2022 was an absolute blast. It was fast and it was furious, and the racing was hard and it was fun, and it was wet for some.

We raised lots and lots of money for our different charities. We had 50 at-risk youth come and experience the Waterfront, and the Two Oceans Aquarium, and learning to sail, and having the most inspirational day. What an absolute jol”. Children from Law Hill Academy, Oasis soccer team, 9 Miles Project and Heideveld Ministry were among those that benefitted from the weekend’s sailing academy. To learn more about the Little Optimist Sailing Academy in Battery Park, visit www.optimistsailingacademy.org.