The 2023 Momentum Medical Scheme Tankwa Trek, presented by Biogen, will feature more singletrack, challenging climbs and riotous riding. In total the four days of the UCI Class 1 stage race will take in 270 kilometres, along with 5 320 metres of climbing. These basic facts do not account for the difficulty presented by the terrain and the weather however.

Rocky outcrops jut from the Koue Bokkeveld landscape where verdant orchards abut sparsely vegetated mountain sides. Sandstone cliffs and shelves reflect the harsh African sun, intensifying the heat and providing natural arches to ride through as well as drop offs to race down. These and the existing trails are coupled with an ever-increasing network of singletracks on the farm around Kaleo, where the race village is situated. All told the combination ensures that the 2023 race will be the best yet, which is fitting for the tenth edition. 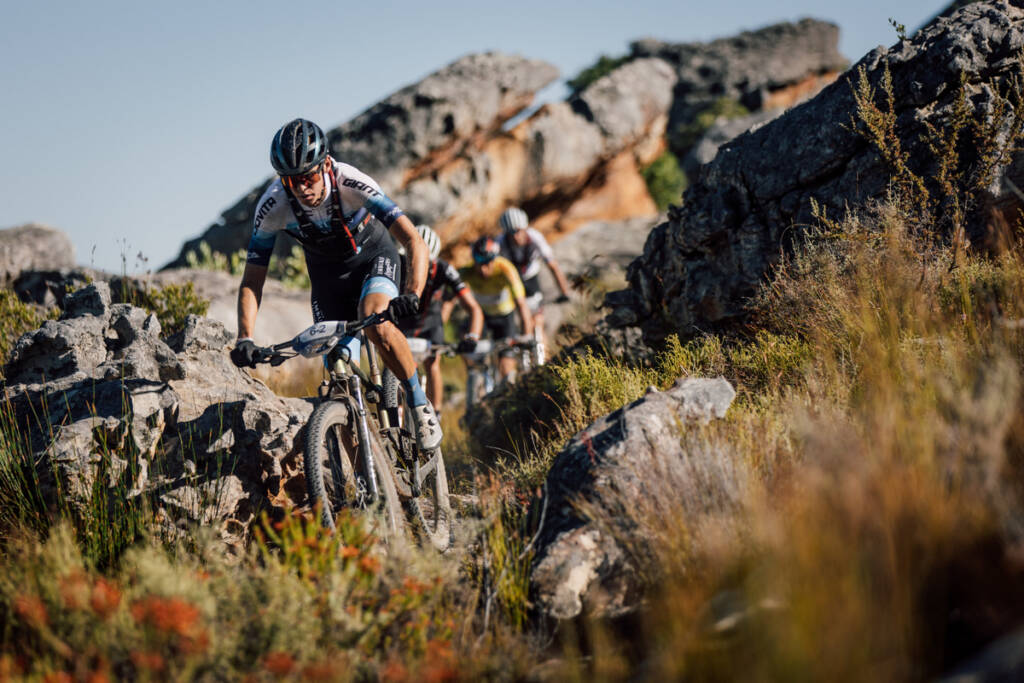 The planes of the Koue Bokkeveld are scattered with outcrops of sand stone pillars which make for dramatic visual and riding features along the race route. Photo by Shift Media Co.

“The 2023 Momentum Medical Scheme Tankwa Trek, presented by Biogen, is set to be the most challenging in a number of years,” Henco Rademeyer, of Dryland Event Management confirmed. “But not unnecessarily tough. The classic challenges like the singletracks of the Witzenberg Valley and the Merino Monster climb remain, while we’ve added more trail to Stages 1 and 4 too. On paper the first and last days of the race might not seem that much harder, but the rugged terrain they take in will certainly add to the overall difficulty of the race.”

“Stage 1 remains just under 30 kilometres in length and takes place on the afternoon Thursday, 9 February,” Rademeyer confirmed. “It will feature even more great singletrack than ever before, but will also boast a couple of early climbs to split the field. The teams will once again be seeded for Stage 1, but we’ll be making use of smaller batch starts to ensure everyone is able to race the stage as quickly as they are callable to provide them with access to the correct start group for Stage 2.” 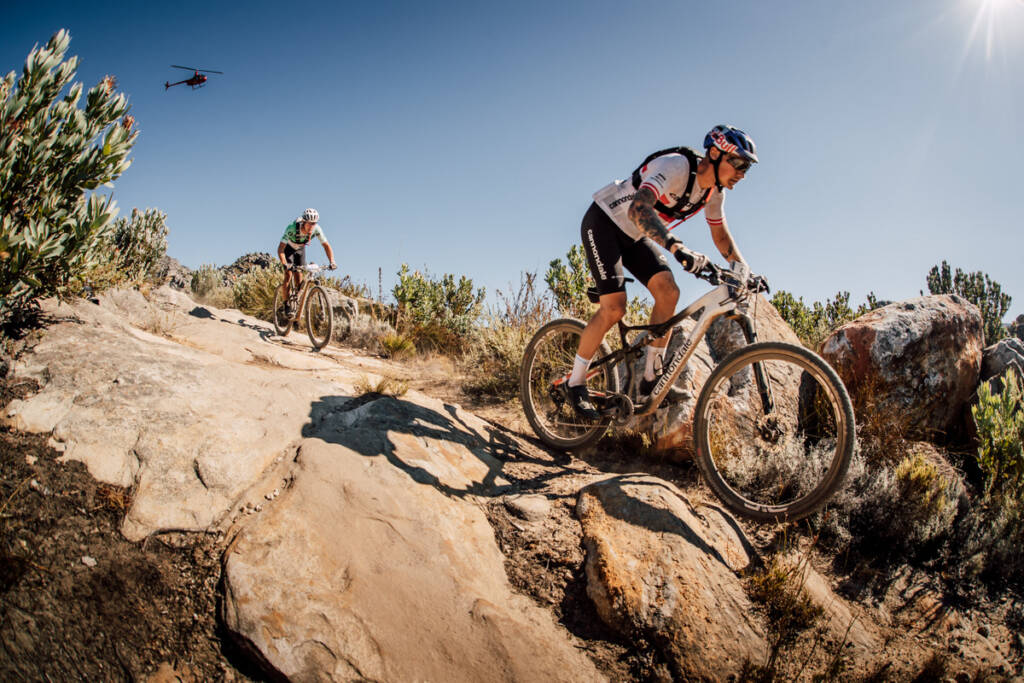 The Witzenberg Valley and its rock slabs will once again host Stage 2 of the Momentum Medical Scheme Tankwa Trek, presented by Biogen. Photo by Shift Media Co.

Day 2 then takes riders into the fabled Witzenberg Valley, where the trails built by Hannes and Sakkie Hanekom await. “We’ll be returning to the traditional anti-clockwise circumnavigation of the Witzenberg Valley,” Sakkie Hanekom confirmed. “But we are adding a few new features, including a spectacular downhill section through a sandstone arch. We’re also moving the water points around a bit, to create a spectator point at Waterpoint 3, which will now be located at SIP Café.”

“Look there’s no way around the Monster,” Route Director, Ernst van Dyk smiled knowingly. “Stage 3 will once again feature the most infamous climb in South African mountain biking, the Merino Monster. The Queen Stage of the race will circle the highest peak in the range, keeping the summit in view for much of the day. While the ascent doesn’t get any easier, the descent is smoothed out every year and that should make for a faster run back to Kaleo after conquering the climb.”

The final stage then takes in much of Van Dyk’s existing Kaleo Mountain Bike Trails in a punchy conclusion to the four days of racing. “Stage 4 might only be 55 kilometres long but it features 45 kilometres of singletrack,” Van Dyk promised. “It starts with nearly 10 kilometres of jeep track to spread the bunches and then it’s singletrack all the way, with just a few quick dual track or district road liaisons. For the elite racers it’ll be a fast and furious affair, while for the amateurs it’ll cap a memorable long weekend of mountain biking with a challenging but exciting route.” 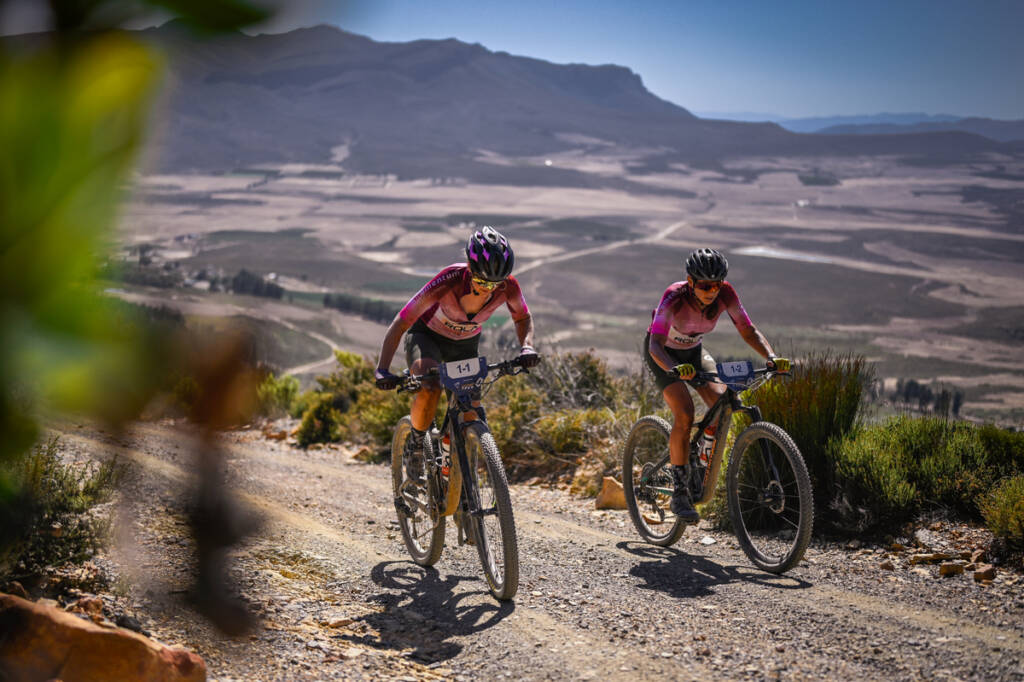 Ascending to 1 800 metres above sea level the Merino Monster is undoubtedly South Africa’s most iconic mountain bike climb and is only ridable during the Momentum Medical Scheme Tankwa Trek, presented by Biogen. Photo by Sage Lee Voges for www.zcmc.co.za.

Though short in distance, the opening stage of the race will set the scene for what is to come with technical riding virtually from the off. Kaleo’s singletracks provide the proving ground for man, woman and machine; with rocky trails, off camber corners and sharp climbs punctuating the Stage 1 route. One waterpoint, located 17 kilometres into the 29.4 kilometre long course, is the only source of respite between the high paced sprint off the start line and the drag to the line on the lawns of Kaleo. Expect high temperatures, thanks to the February heat and the 15:00 start time.

Stage 2 features an anti-clockwise circumnavigation of the Witzenberg Valley, complete with the Hanekom brothers’ famously technical singletracks, including the rock shelf drop and the infamous switchbacks. Getting there will require ascending the Old Wagon Trail and descending into the fertile valley from the Koue Bokkeveld plateau. The day’s major climb is located on the western wall of the Witzenberg and provides views over Tulbagh and out towards Table Mountain far to the south from the summit. The descent from the highest point of the day features a white-knuckle race through a spectacular stand stone arch before the trek back towards the eastern exit out of the valley. Before starting the final climb, the SIP Café spectator and waterpoint offers the opportunity to refuel for the ascent back to the Bokveld and the drag through the orchards to Kaleo.

The Merino Monster is the undoubted iconic feature of the Momentum Medical Scheme Tankwa Trek, presented by Biogen. Rising over 1 000 metres from the Ceres Valley floor to the summit, at 1 800 metres above sea level it features an 8.8% average gradient for the final 8 kilometre stretch from Waterpoint 3 to Waterpoint 4. Getting to the foot of the climb requires significant work too however. Stage 3 begins with a race across the Bokveld to the top of the Old Gydo Pass. The dual track pass allows for a rapid drop into the Ceres Valley where a mix of rugged jeep tracks and flowing singletracks traverse towards the east, with the Monster ever looming to the left. When the climbing commences, from Water Point 3 it begins gradually at first before ramping up on an old trading route. From the farmstead at the foot of the Merino Monster 8 challenging kilometres await. Once riders have conquered the climb, they can choose to recover at the mountain top aid station and take a commemorative photo, or descend directly to Kaleo along a rough path that demands absolute focus. The final 10 kilometres are a high-speed race back to the finish where a hero’s welcome awaits.

Stage 4 is not to be underestimated, despite its shorter distance and lower accumulated meters of elevation gain. It will be packed with singletrack, featuring nearly 45 kilometres in the 54.4 kilometre total distance. That means aside from the early dual tracks to spread the field virtually every metre will be contested in the trails. Snaking climbs, some through poplar groves and others on expose hillsides, lead to fast paced descents where staying agile and nimble will pay dividends. The day’s first waterpoint follows a particularly arduous stretch, while the second sets riders up for a roller-coaster ride all the way back to Kaleo. The final finish line will reward with medals, high fives and more before prize giving concludes four days of Koue Bokkeveld Bliss.

Entries to the 2023 Momentum Medical Scheme Tankwa Trek, presented by Biogen, opened in April. Various entry options, including for standard camping or luxury upgrades, are available for the race which takes place from the 9th to the 12th of February next year. To find out more visit www.tankwatrek.co.za. 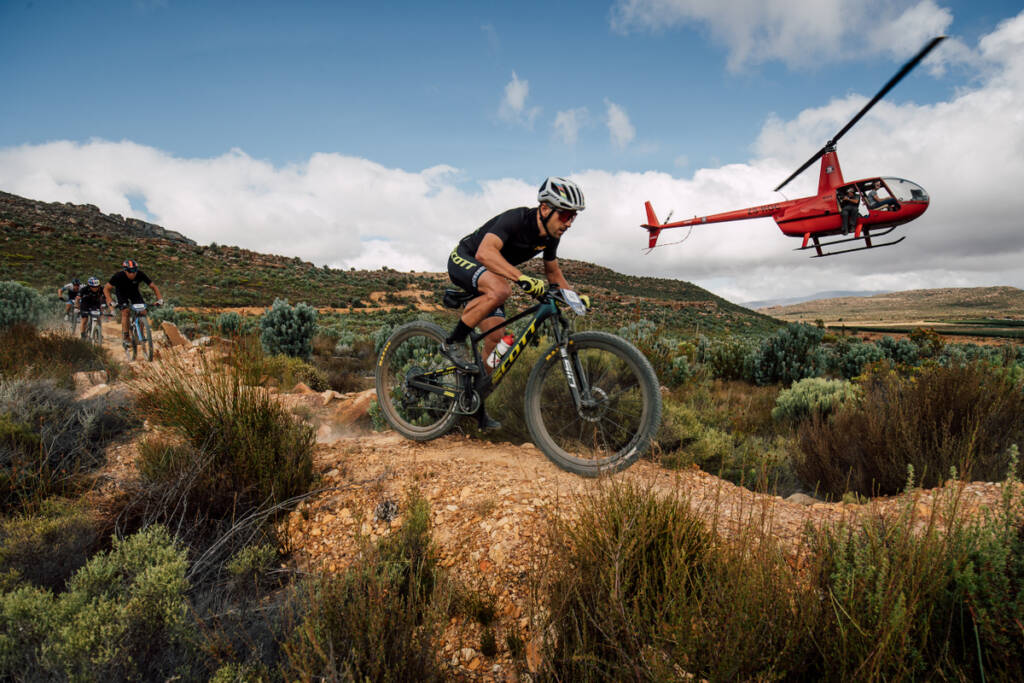 Kaleo’s growing trail network will host much of Stage 1 and 4, providing 45 kilometres of singletrack for the 54.4 kilometre long final stage. Photo by Shift Media Co.