Trials by Fire, Wind and Water at the CTCT

Trials by Fire, Wind and Water at the CTCT

“It’s just the same loop around the peninsula, how difficult could it be to organise?” one of sponsors of the Cape Town Cycle Tour half-jokingly asked Dave Bellairs, the marketing, media and sponsorship director of the Cape Town Cycle Tour Trust. Very, it turns out! “No two years are the same” Bellairs sighed, putting down the phone after another phone call about the last minute problems cropping up two and a half weeks out from the 2019 event.

“Being able to cope with the last minute changes is the measure of the team” he praised his fellow Cycle Tour organisers. “Every year is the hardest year” Bellairs laughed.

Listen to the full interview on the Diverge Podcast

Three of the last four editions of the famous race have been among the most dramatic in the event’s 42 year history. In 2015 the Cycle Tour was shortened to just 47 kilometres due to a fire raging on the peninsula. Two years later gale force winds forced the first ever cancelation of the race. While last year the Cape Town water crisis required innovative solutions to ensure the event could be held as scheduled.

The Cape Town fire started in Muizenberg on the 1st of March 2015, a week before the 38th Cycle Tour was scheduled to start. Despite the best efforts of fire fighting crews the race nearly did not take place at all. “On the Wednesday before the race disaster management told us the Cycle Tour would not be able to proceed” Bellairs recounted. “But with registration opening the next day I knew most of our international riders would already be in South African and many riders traveling from up country would already be on the road to Cape Town. We could not disappoint them by cancelling. So we shortened the route to 47 kilometres with the race turning at the end of the Blue Route. It became a solidarity ride. In fact we had one of our best ever turn-outs, in terms of entries to riders taking part.” 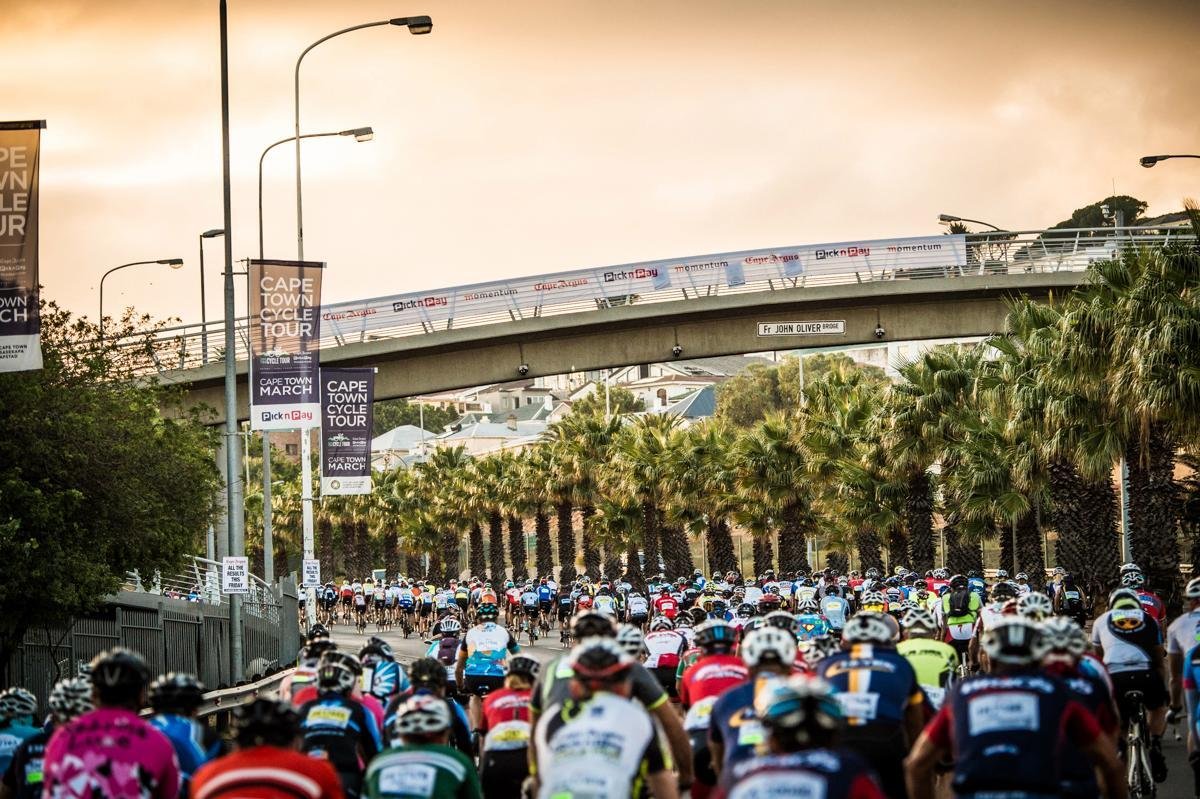 The Cape Town Cycle Tour is the largest timed cycling event in the world.

Two years on and the 40th Cycle Tour faced disruption from a familiar element. “The predictions leading into the race indicated that the wind would be no stronger than it was in the infamously windy years of 2009 and 2010” Bellairs said. “We had been in communication, as we always are, with Western Cape Disaster Management; so when the wind speed was registering at 100 kilometres per hour on the start line it was significantly windier than we expected. The first two groups got underway but when the head commissaire called me to say it was dangerous out on the road, even for the most skilled riders, we knew we had to make a decision.”

“The Cycle Tour starts in waves not only to ease congestion on the roads but also because of safety in the city centre. With the wind speeds as they were, Disaster Management wanted to avoid 35 000 people gathering near the start; so delaying the start further was not an option. There were buildings with construction scaffolding on them around the start and it was a potentially hazardous situation. We also could not send people to the finish venue as the wind speeds made the marquee tents unsafe too, so we had to evacuate the caters and support services personal from there” Bellairs explained.

“I’m not an overly emotional person” Bellairs confided. “But that day was the only time in my twenty years with the Cycle Tour that I cried. It was not a decision we took lightly. During the Cycle Tour we take over the Western Cape Disaster Management Centre, at Tygerberg Hospital, as the event’s command centre. The police chief makes the final decision regarding safety on the day, but we went around the table to all the key stakeholders and unanimously agreed it was unsafe to continue.” 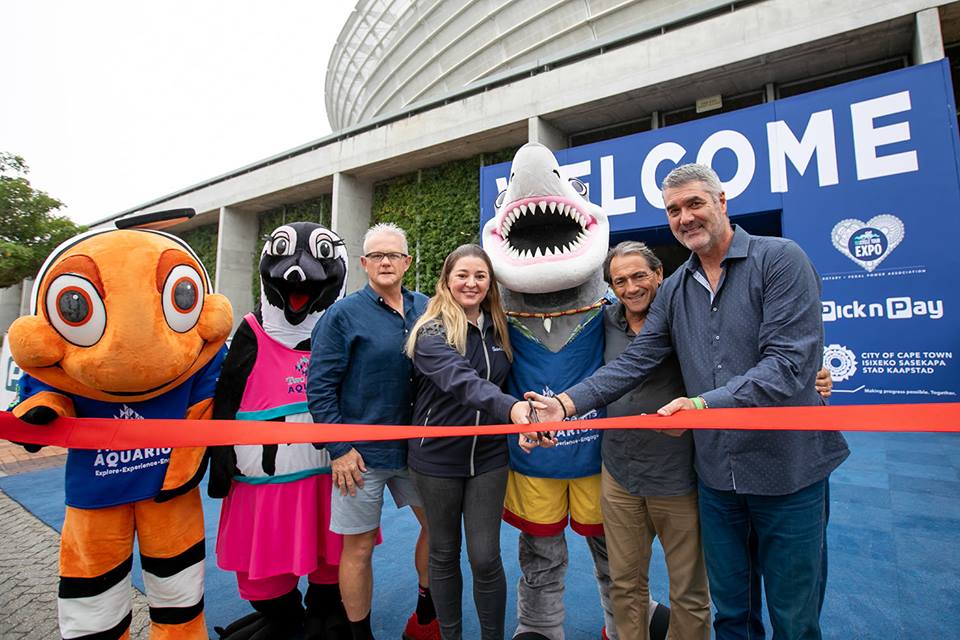 Dave Bellairs, next to the Two Oceans Aquarium penguin at the opening of the 2019 Cape Town Cycle Tour Expo.

Reflecting further on the cancellation of the 2017 Cape Town Cycle Tour Bellairs continued: “After the decision was made I was relieved, but also very emotional. I know so many riders save for years to make the trip to Cape Town for the Cycle Tour. But it was the right decision. Seeing the video of one particularly recognisable rider leopard crawling to the side of the road and being helped in behind a concrete pillar, to hide from the wind, showcased just how difficult the conditions were. If mountain bike World Champion Nino Schurter could not ride in that wind it was not safe for anyone.”

“Strangely, we got our best ever media coverage that year” Bellairs laughed. “The videos, photos and memes were all over social media.”

Participant safety is the key concern for the Cape Town Cycle Tour when making any significant decision. Some of those decisions are complex because they are evaluated subjectively while others are made simpler by regulation. “Chapman’s Peak Drive for example has a wind speed limit after which the road is closed by the toll management company” Bellairs highlighted.

After the cancellation of 2017 the 2018 Cape Town Cycle Tour was dubbed #40take2. It was not without its problems either however. “Day Zero was a big concern last year” Bellairs began. “City of Cape Town residents were concerned about the impact the race would have on the very limited water supply, so we took the event completely off the grid. We used no municipal water for the water points and made plans to put water back into the system to cater for the influx of visitors to the city. Farmers in the Elgin Valley transferred nearly two million litres of water into the upper Steenbras Dam and Swellendam Municipality trucked water to Cape Town.” 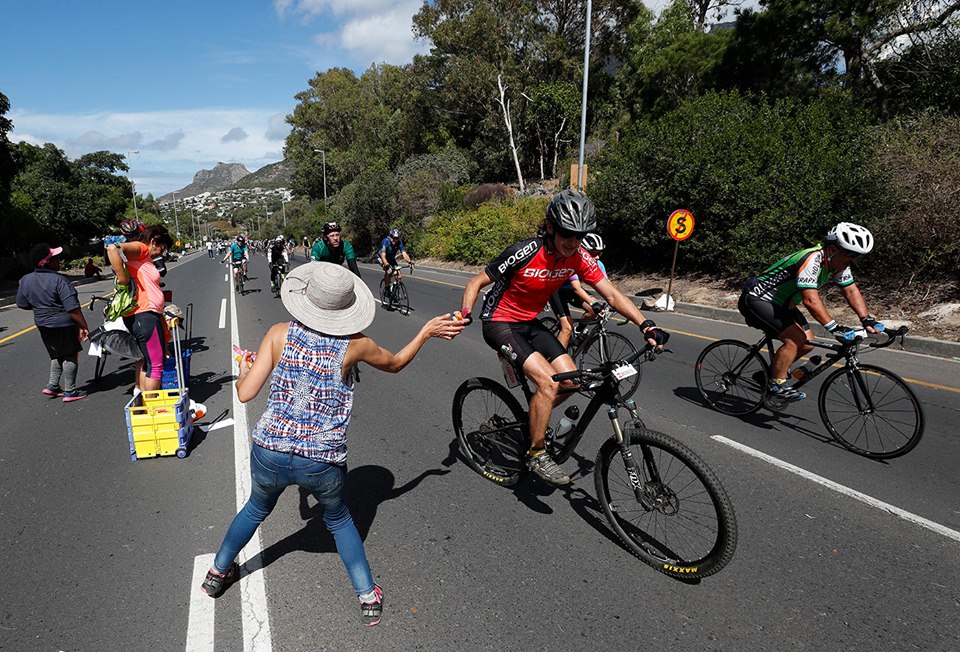 It’s not just other Western Province communities who support the Cape Town Cycle Tour, the residents of the City come out in force to cheer on the riders.

To cope with the new challenges that seem to arise annually and to ensure the event keeps its status as the world’s largest individually timed cycle race the Cycle Tour Trust continues to innovate. “We are continually looking for ways to improve. I believe if you stop innovating you are dead in the water” Bellairs stated. “A big part of that is engaging with the communities along the route. All the funds raised by the Cycle Tour go to the beneficiaries, the Pedal Power Association and The Rotary Club. They have done amazing work in the communities, but we try to ensure there is a tangible benefit around the Cycle Tour – especially for the historically disadvantaged communities on the route. We create short term employment opportunities by using people from those communities in our clean-up campaigns after the race.”

Natural disasters and construction delays aside the Cape Town Cycle Tour has also faced challenges from legislation in recent years. “Eventing has become a lot more complicated since 2010” Bellairs sighed. “Government brought in new legislation, dubbed the Events Act, to manage the soccer World Cup in 2010; but while the legislation applies to all events it was designed specifically for stadium sports. Practicalities of how many toilets you need for 35 000 people are dictated by the legislation, but want is not accounted for is that our 35 000 people are spread out over 109 kilometres rather than grouped in one area. It can be frustrating working within a framework clearly unsuitable for cycling events, but we are doing what we can to get the Events Act updated.” 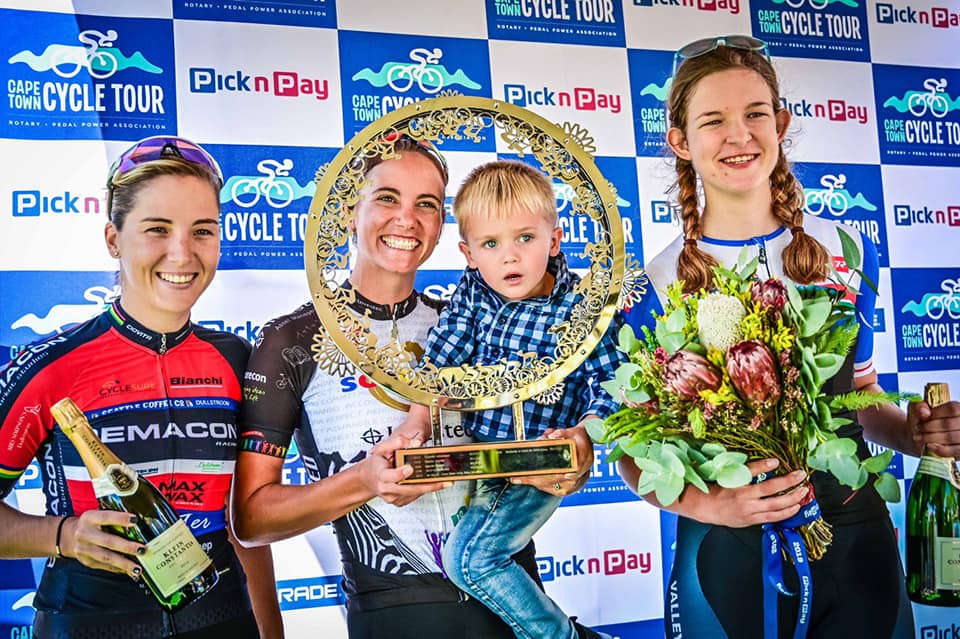 How the CTCT will seek to remain relevant to the next generation is the event’s challenge for the future. Photo by Tobias Ginsberg.

The 2018 best estimate was that the Cape Town Cycle Tour injected R500 million into the economy of the Western Cape. So while there are undoubted challenges the good the event does for the community at large more than makes up for those. In the years to come, however, the obstacles it faces will likely shift with the times.

As the event continues to evolve it needs to adapt with the times. “As a father of a teenage boy I am all too aware of the lure of e-sports” Bellairs smiled. “How we keep attracting young cyclists to the Cycle Tour is a concern. But e-sports also offer exciting possibilities… Here’s a teaser:  how do I get 200 000 people to ride the Cape Town Cycle Tour? We need to move into that e-space. You should be able to get onto your Zwift bicycle in New York, even though it is the middle of winter, and virtually ride the Cycle Tour with the 35 000 other people here on the ground in Cape Town. That’s the space we need to look at” Bellairs prophesised.