On Wednesday the 13th of March the Kaymandi Sports Fields and songo.info BMX track hosted the 2019 songo.info Champions Race. The Stellenbosch based sporting and education charity attracted eight former and reigning World Champions, three Olympic Gold Medallists and the reigning European Champion. Accounting for three of those eleven titles between them Sam Gaze and Anna van der Breggen were worthy winners on the day and in terms of their impressive palmarès.

The racing started earlier in the afternoon with the Future Champions Race. Boys and girls raced for prizes donated by Specialized Bicycles in Under 14 and Under 18 age groups. The younger girl’s category was won by songo.info programme rider Milani Dingani, while Henre de Villiers won the Under 14 boy’s race. The Under 18 titles were secured by 2018 champion Andrea Schofman and the highly regarded junior racer Aiden Penfold. 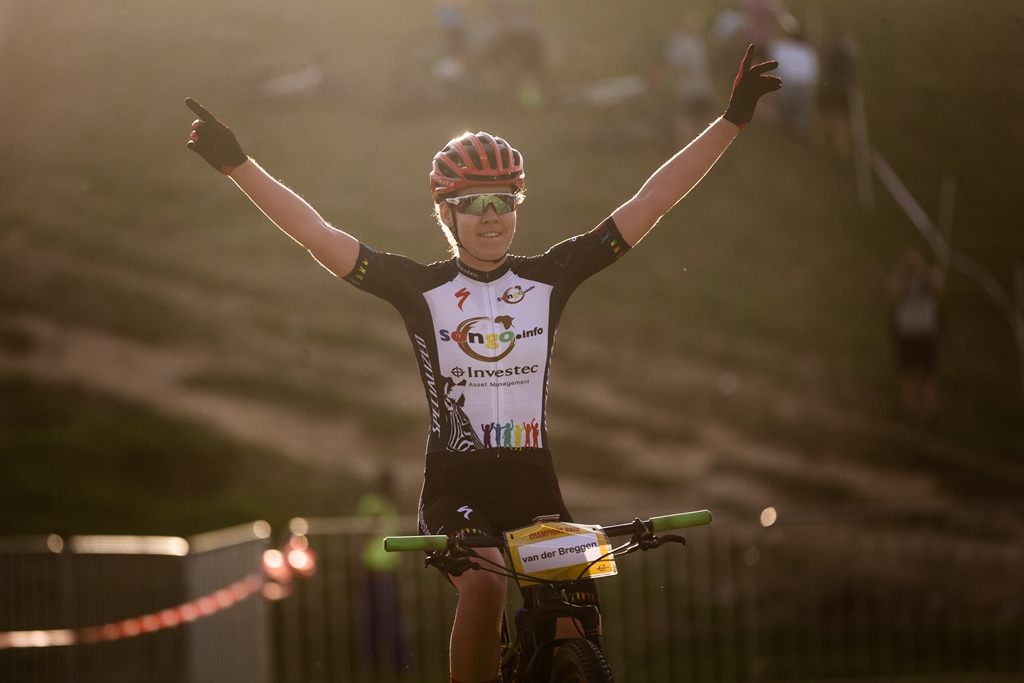 The Olympic Road Champion Anna van der Breggen stormed to her first mountain bike race win of the season at the songo.info Champions Race on Wednesday in Kayamandi. Photo by Michal Červený.

In the elite women’s race the Investec-songo-Specialized paring of Annika Langvad and Van Der Breggen went up against their Absa Cape Epic rivals Nadine Rieder, Candice Lill and Ariane Lüthi. Van Der Breggen showed what a formidable force she is likely to be in the week-long stage race as she stormed away from the rest of the field. The Olympic and Road World Champion hit the front on the second lap, after Langvad had set the early pace and gradually pulled away from the rest of the field. Langvad for her part seemed content to shadow Rieder and one got the feeling that the Marathon World Champion was not actively pursuing her teammate.

“It is nice of course to start my time in South Africa with a win” Van Der Breggen smiled after crossing the finish line. “It’s a cross country race so it was hard, but it is good to win. I ride for Investec-songo-Specialized so it is really a great concept to start with a race like this for songo.info. To see why we are wearing the jersey, it is great to have a race here and to see how many people enjoy the sport. Hopefully we can inspire them to chase their dreams” the victor said. 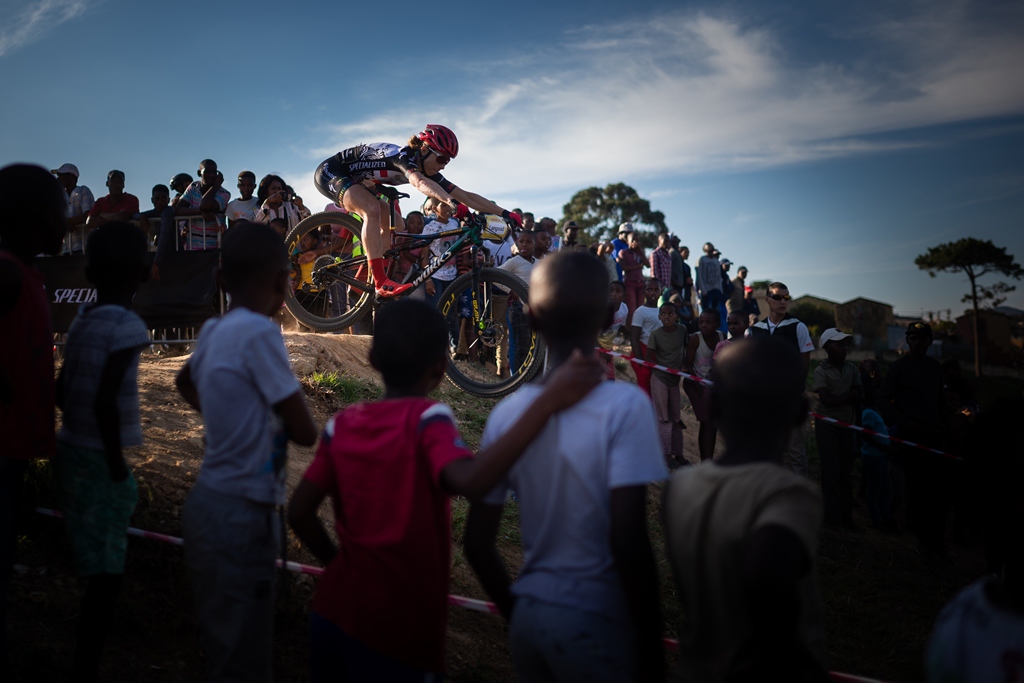 Annika Langvad finished third in the elite women’s race aboard the custom songo.info inspired Specialized S-Works Epic she will race at the Absa Cape Epic. Photo by Michal Červený.

The stacked men’s field featured six of the eight World Champions present at the event, with the reigning World and Olympic mountain bike champion Nino Schurter looking resplendent in his rainbow stripes on the start line. He was however again trounced, on South African soil, by Gaze; the former Under 23 World Champion and Commonwealth Games Gold Medallist. Gaze and Schurter made the early racing, opening a gap of fifteen seconds to a chasing pack led by Jaroslav Kulhavý by the end of the third lap. On the fourth lap South African cross country champion and current Under 23 World Champion Alan Hatherly bridged across to the leaders.

By the end of the next lap Hatherly held a lead of nearly twenty seconds, but a puncture put pay to his chances of victory. With the chances of them being reeled in from behind shrinking; Gaze and Schurter diced between each other for the victory over the final two laps. The young New Zealander proved the stronger rider on the day, powering away from the Swiss star to establish a cushion comfortable enough to allow Gaze to slow and wheelie across the line; much to the delight of the songo.info children lining the barriers. 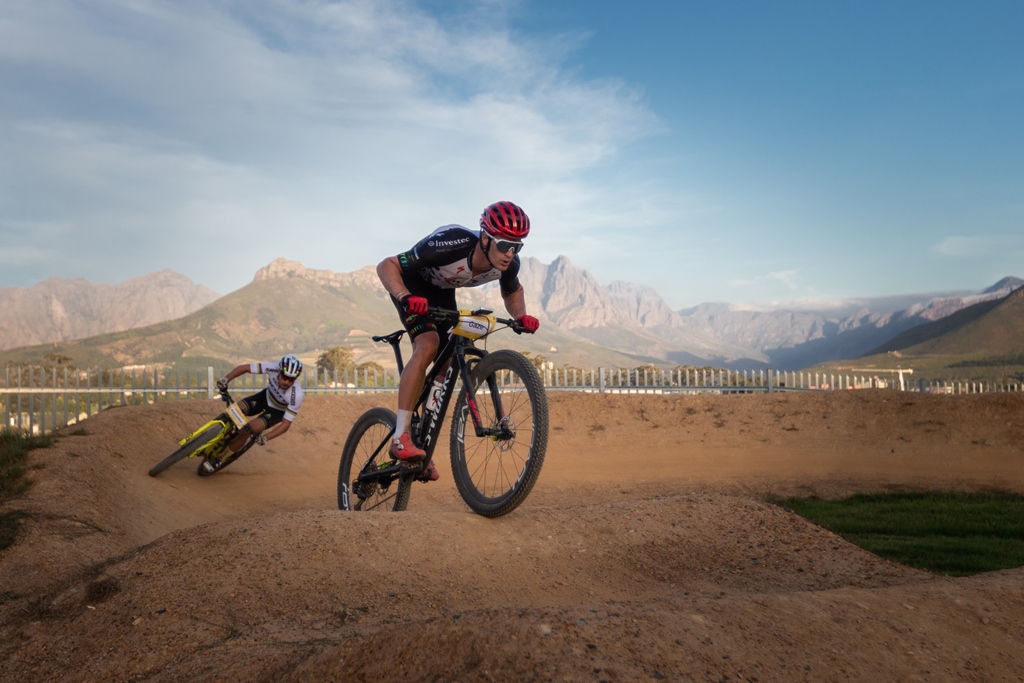 Gaze’s win comes just three days after his victory in the 2019 Cape Town Cycle Tour and he could scarcely have hoped for a better start to his South African racing season. “I’m super happy, tonight was wicked” he enthused. “It’s great to race here in Kayamandi, with all the kids coming to watch. It was a fun race, with Investec-songo-Specialized right at the front of the race with Jaro [Kulhavý] and Simon [Andreassen]. And I think Susi [Christoph Sauser] wasn’t too far off the back so I think everyone is in really good spirits ahead of next week’s Absa Cape Epic” Gaze concluded with a grin.

“The songo.info Champions Race is all about showing people what we do and where we do it” songo.info’s sport programme manager Sipho Madolo explained. “It is also amazing for the kids to see Nino, Jaro and Sam racing. To bring them closer to riders like that gives them motivation to pursue their cycling dreams.” 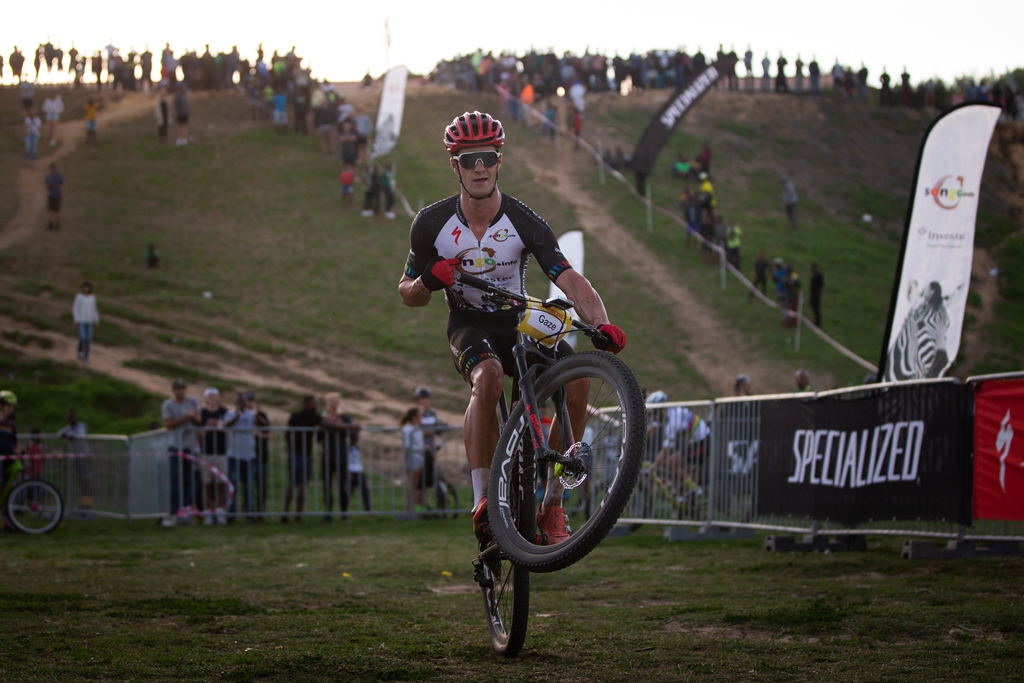 Sam Gaze added the songo.info Champions Race to his Cape Town Cycle Tour title as he made it two wins from two starts in South Africa thus far in 2019. Photo by Michal Červený.

To view more photos from the songo.info Champions Race or to follow the Investec-songo-Specialized teams at the Absa Cape Epic please follow @songoinfo on Twiter, or @songoinfo on Instagram. Alternatively, like the charity’s Facebook page songo.info. For more information on the custom Specialized S-Works Epic bicycles, which Kulhavý and Langvad will ride at the Absa Cape Epic, please visit www.songo.info. 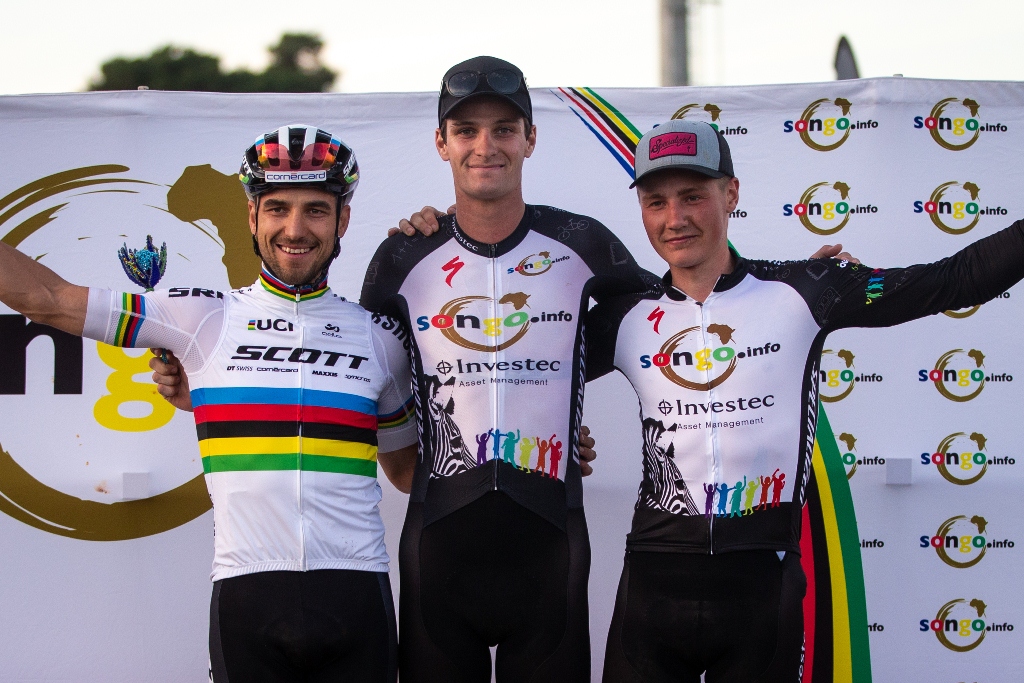 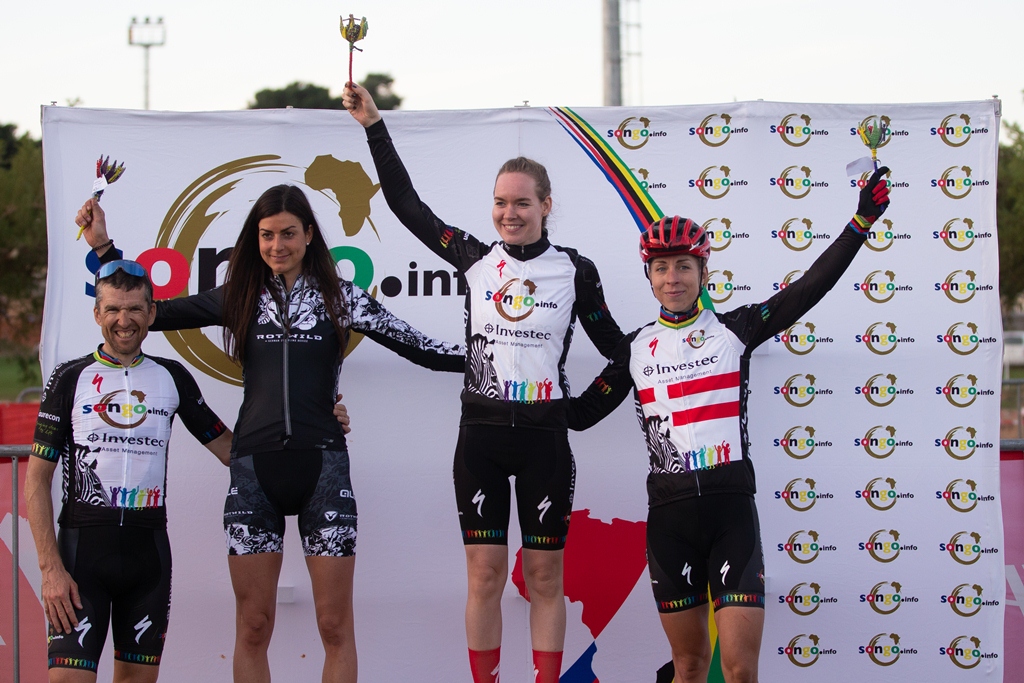