It is hardly fair to compare the 2016 Specialized Diverge Seamus Allardice usually rides to the 2019 model, he discovered within a few pedal stokes on the new machine. But the DNA of the older bike is still there driving the latest model towards fresh adventures. 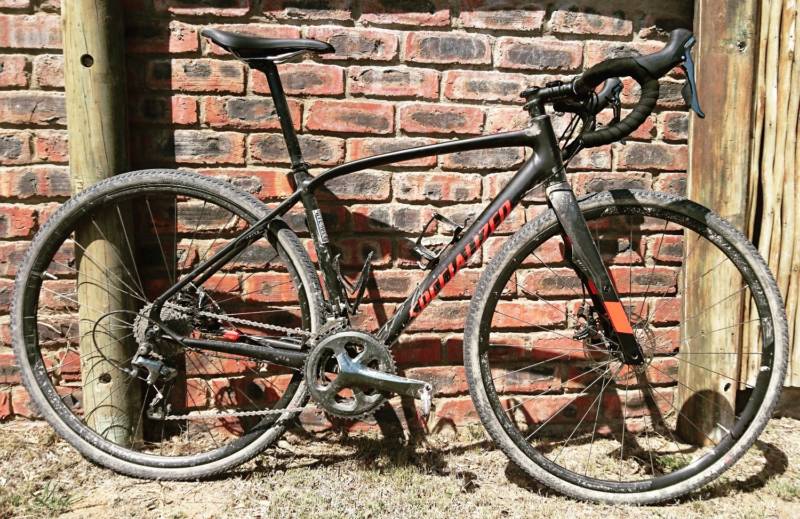 The original. A 2016 Specialized Diverge.

Since 2016 a great deal has changed in bike design. On the mountain bikes have become longer, slacker and more capable. Even short travel hard tails and XC race bikes can soak up technical terrain like never before. On the road disc brakes have become nearly ubiquitous and even World Tour teams are racing bikes equipped with them frequently. In between the gravel sector has grown from strength to strength and modern gravel bikes are designed specifically for devouring hundreds of miles of district roads. No longer are gravel bikes endurance road frames rebranded and repainted to look a little more hard-core.

Over the last three and a bit years I’ve ridden close to 5 000 kilometres on my old Diverge. I can honestly say it is the best thing I’ve ever bought myself. It has provided countless memories, taken me on trips like the Bikamino and the Easter Bikepacking Adventure. But I do often wish for a few changes to it.

Off the bat, the tyre clearance on the 2016 Diverge is simply not enough. Due to the aluminium frame and wheels, which easily develop a wobble when traversing rough terrain, I cannot fit 38c tyres on the rear wheel. I have a 38c front tyre, which helps with the grip and gives a bit more confidence on gravel descents but what I would give for the comfort of wider tyres under my ass… The rocky jeep tracks of Namaqualand very nearly rattled me to tears. Carbon wheels would also be a great upgrade, for the added stiffness and speed. As would hydraulic disc brakes. And running tyre clearance a close second, a clutch rear derailleur would be a game changer. But for a bike which cost under R25 000 it has performed and lasted remarkably well. I am not easy on my bicycles either mind you. I wouldn’t say I ride hard, but I do things I shouldn’t on them. Like taking my Diverge down rocky singletracks or crazy jeep track descents.

This is not about that though. This is about the 2019 Diverge Expert… So let’s get cracking. 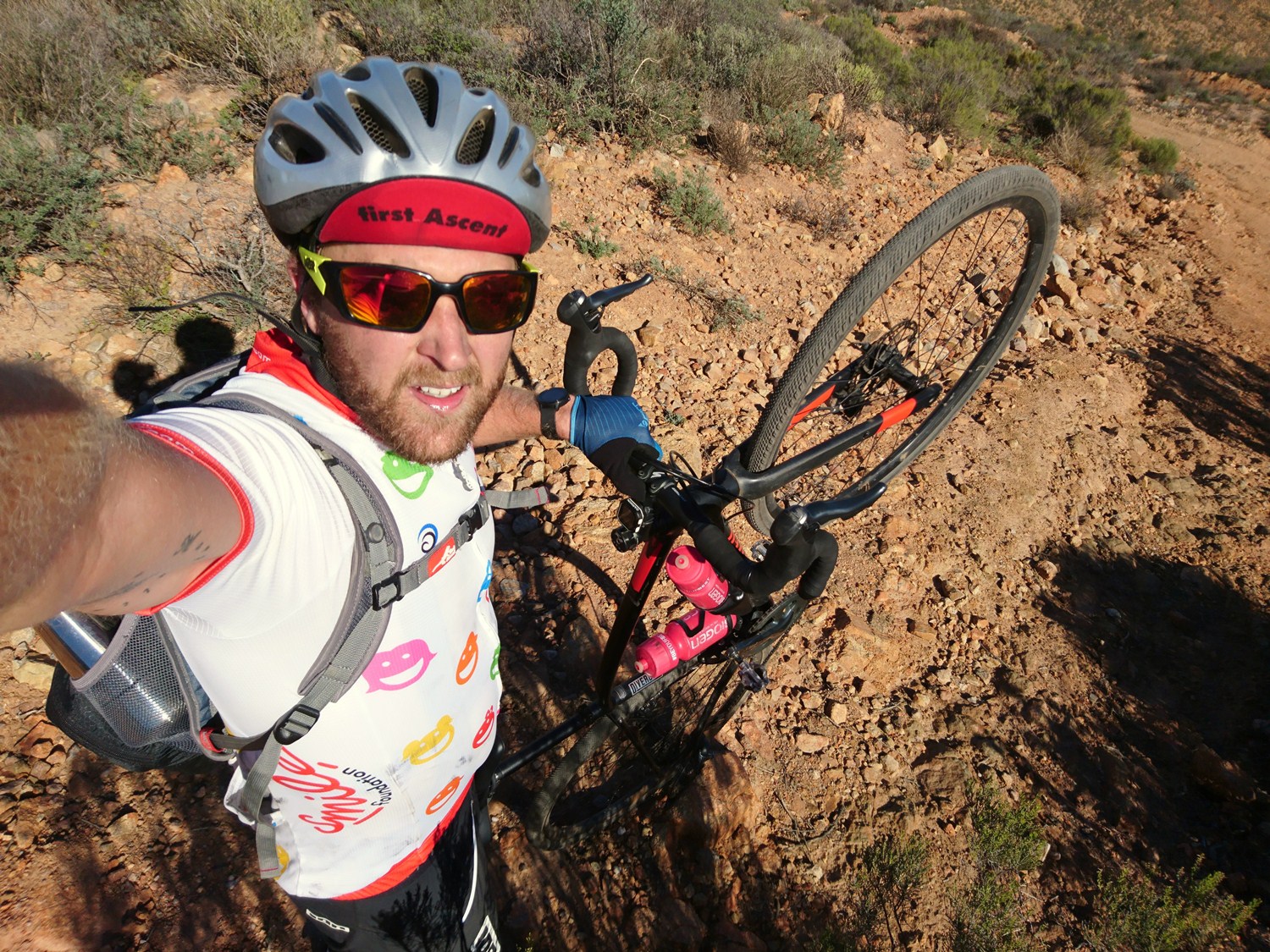 Pink my not be for everyone. But I can assure you real men ride pink bikes. It certainly makes the 2019 Diverge Expert X1 an eye catching machine. If Specialized could, I would suggest doing all their test bikes in that colour-way. That would ensure the test bikes stood out in any peloton. 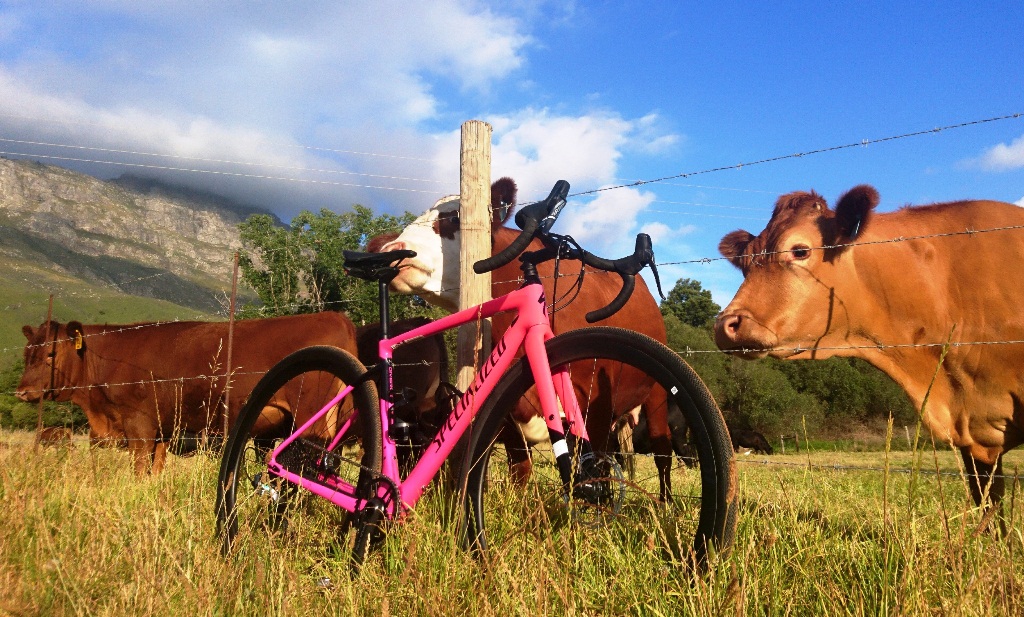 Even the cows love the look of it.

Looking past the colour the bike’s stand out aesthetic features are the straight fork, ultra neat internal cable routing, Future Shock sitting atop the head tube and the drop stays. I love a drop stay. I don’t think I’ll buy a road, gravel or hard tail mountain bike ever again without them. Not because they provide a more comfortable ride or greater aerodynamic benefits, but just because I’m a sucker for the look. 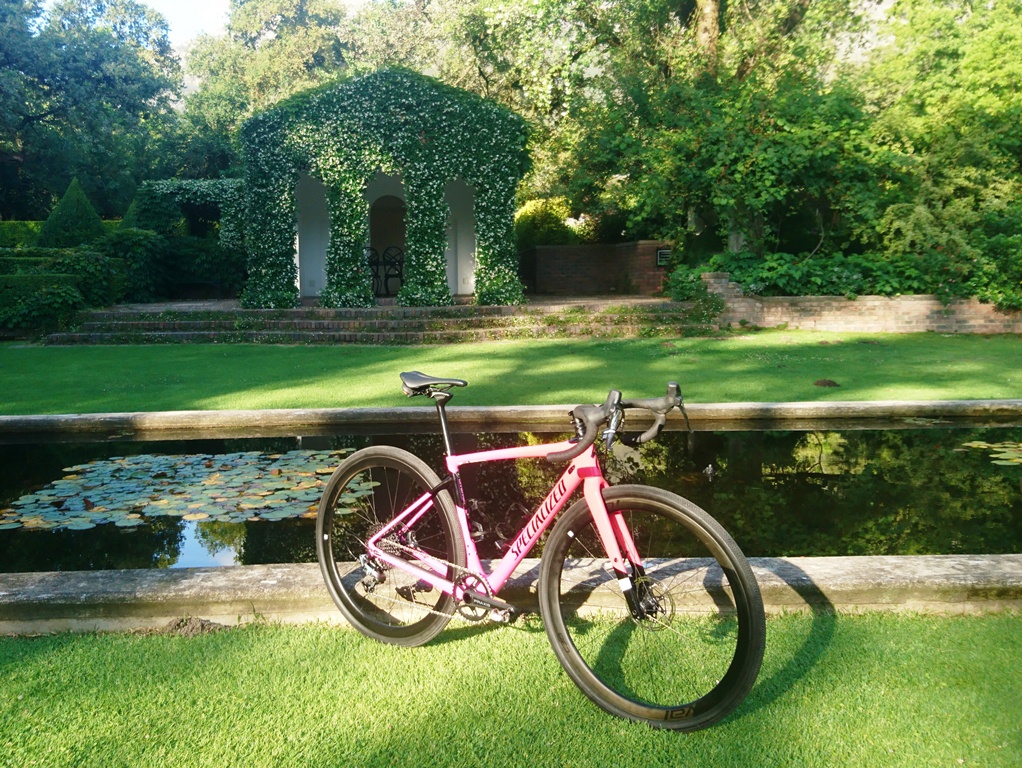 At R78 000 the Expert X1 only has the S-Works model above it in the South African Diverge range. It is equipped with a SRAM Force one by eleven drivetrain. A 40 tooth chainring drives a 10-42 tooth cassette and stopping power is provided by a pair of flat mounted SRAM Force hydraulic disc brakes. The full carbon frame, is constructed from Specialized’s FACT 9R carbon, and rolls on a pair of deep section Roval C38 wheels. Handling on gravel roads is improved by the 2019 Diverge models being specced with flared handlebars. The Expert X1 model is fitted with a Specialized Adventure Gear Hover bar which features a 103mm drop, 70mm reach and a 12 degree flare. 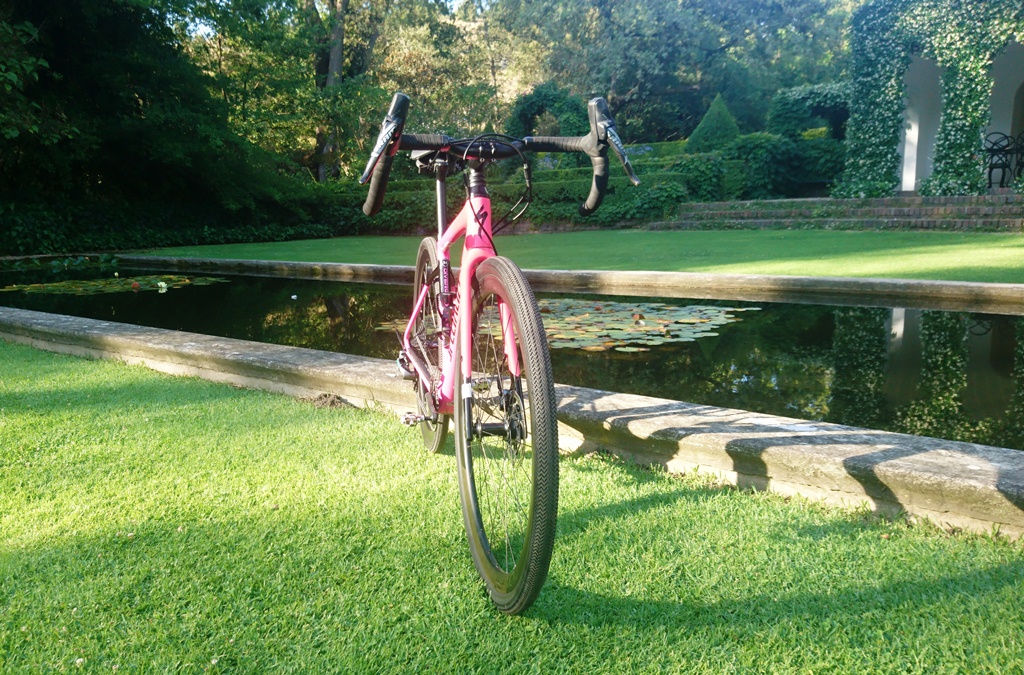 Note the flare in the bar. This adds more comfort and control than you would believe if you have never ridden a flared drop barred bike.

To ensure comfort on long gravel roads it has tyre clearance for 700 x 42mm or 650b x 47mm rubber. That means if you fit 27.5 inch rims you can run up to 1.8 inch wide tyres on the bike. The bike ships with a set of 38mm wide tyres on it, which makes the Diverge Expert X1 capable on tar roads and not exactly uncomfortable on gravel, though you will want to make better use of the extra clearance if you are going to do serious gravel grinding. 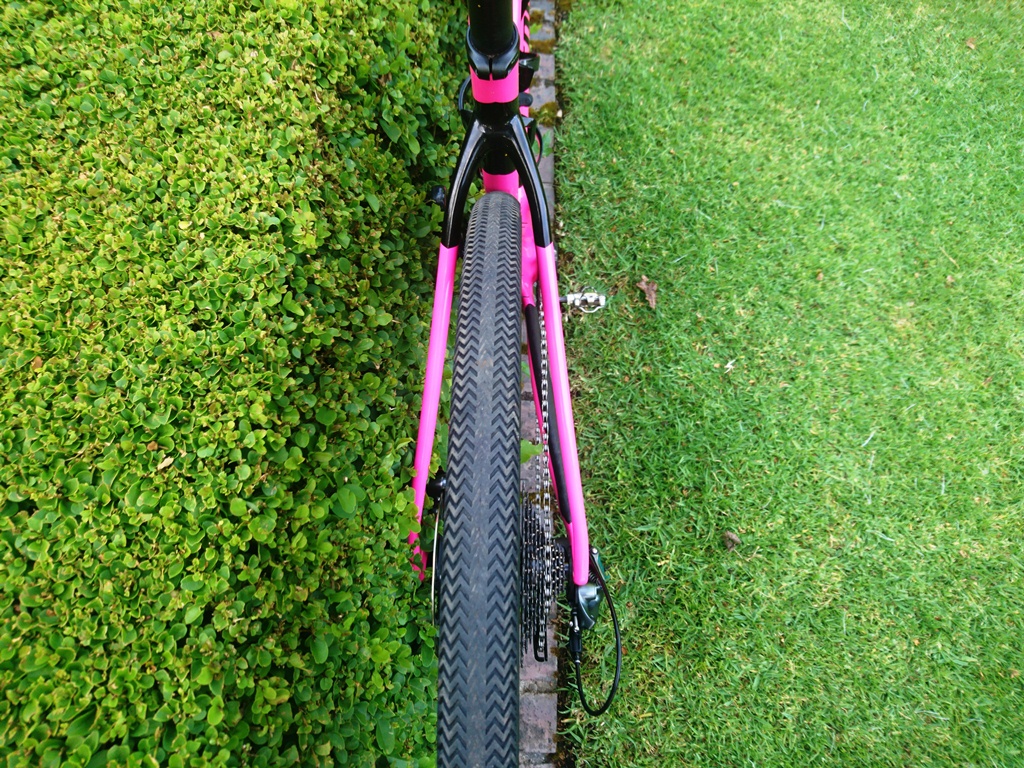 Specialized’s Sawtooth tyres provide a fast rolling tread pattern and a surprisingly good amount of grip, given they lack any real knobblies. Grip you see comes by in large from the rubber compound rather than the profile. But that said when it gets really loose the low profile Sawtooth tread pattern won’t provide much traction when you lean the bike over. If the ground isn’t hard packed, you had better descend with caution. But then again most people – except Oliver Munnik – don’t try to push the downhill limits of gravel bikes too much. I certainly don’t. 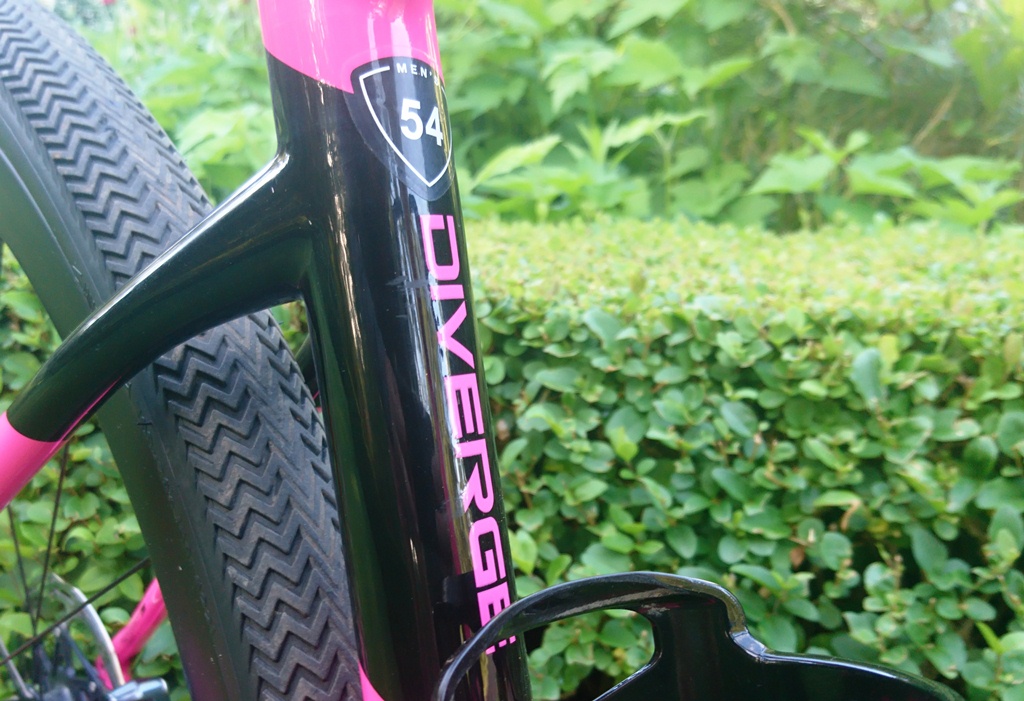 Getting down to business the bike’s ride is exceptional. On the Roval C38 carbon wheels it rolls like a dream. It accelerates effortlessly and skips across gravel surfaces at a remarkable speed. The frame is stiff and light. And the geometry is comfortable, plus confidence inspiring. It manages to somehow not sacrifice either comfort or stability for speed. Given the low, compared to the old model, BB height and larger BB drop as well as the longer chain stays and wheel base it is not surprising the bike feels more stable. Perhaps the speed comes more from the carbon wheels and lighter weight than the frame itself, but that is impossible to tell without riding the aluminium framed and wheeled model. 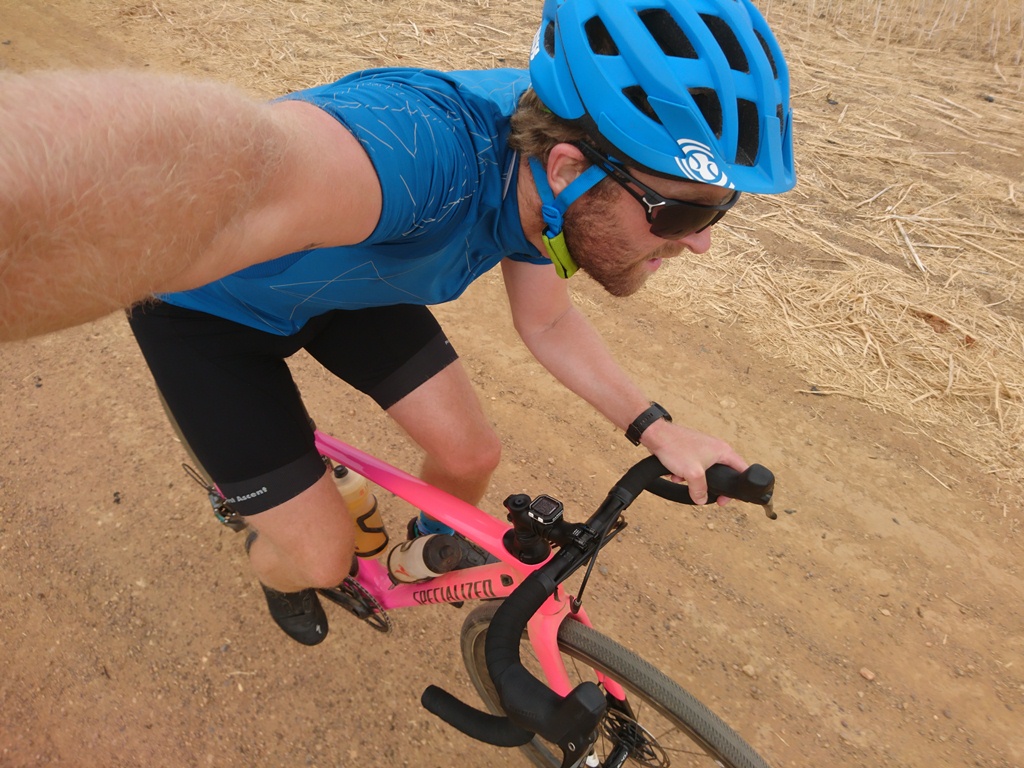 It certainly won’t let you down on a long gravel road adventure or on the asphalt during a group ride with your roadie mates. It is not a road bike, but if you have to pick a drop bar bike to do multiple things then a carbon framed and wheeled gravel bike is a more versatile option than even an endurance road bike.

On the gravel the wider tyres, cobble gobbler seat post and Future Shock all work to reduce the feedback from the rough surface to your body. Unlike mountain bike suspension the Future Shock in the head tube doesn’t really keep the front wheel on the ground, so it doesn’t significantly improve handling. It is designed rather for your comfort and to help reduce fatigue. 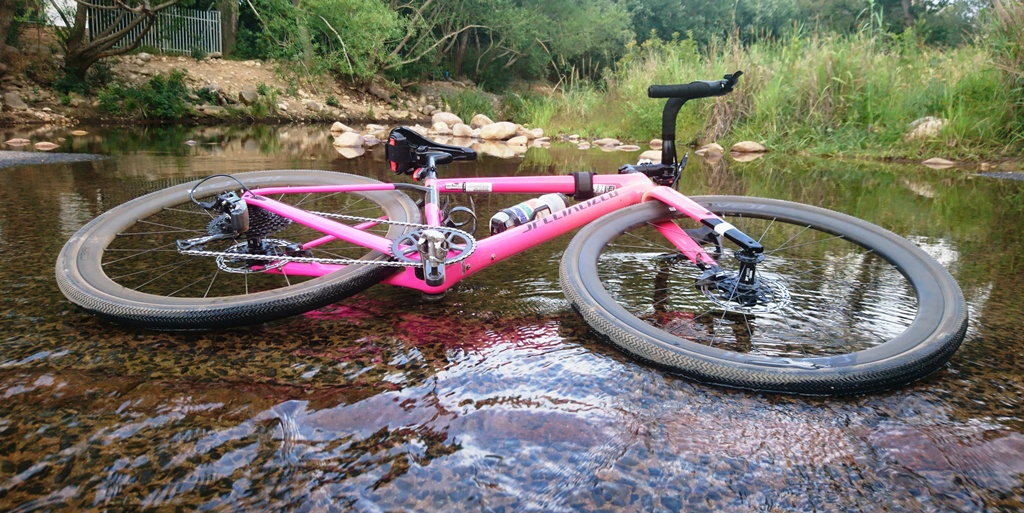 Much of the marketing around the Diverge, from when it was introduced in mid-2017 on the 2018 model year bikes, has centred on the Future Shock. The 2019 bike features a coil spring shock with a progressive dampening effect that ramps up towards the end of its 20mm of travel. You can be pretty sure that the 2020 model year Diverges will boast the new Future Shock 2.0, in the top end builds, which sees the coil spring replaced with a hydraulic damper and the addition of a lock-out dial. (For the sake of accuracy: the Future Shock 2.0 doesn’t lock out entirely, but rather stiffens up considerably.)

The boot over the Future Shock keeps dust, grime and in the case of this photo pollen out of the moving parts.

Much like the brain on Specialized’s Epic mountain bikes the Future Shock isn’t to everyone’s liking. I for one am not sold for two reasons, but first let me tell you who will love it. If you plan on racing gravel bikes you will love it. Then the disadvantages I am about to outline won’t be a concern for you.

My initial issue with the Future Shock is that it causes the bars to drop or compress away from you when you hit a larger bump in the road. This happened to me when I hit a pothole about 50 metres into my first ride. Admittedly I wasn’t paying full attention to the road as I was fiddling with something on the bike, probably my GPS, when I hit it. The compression of the bars very nearly sent me head over heels though. Later in the ride I re-tested the sensation by steering into bumps and found that the compression can feel like it’s about to pull the bars from your hands. 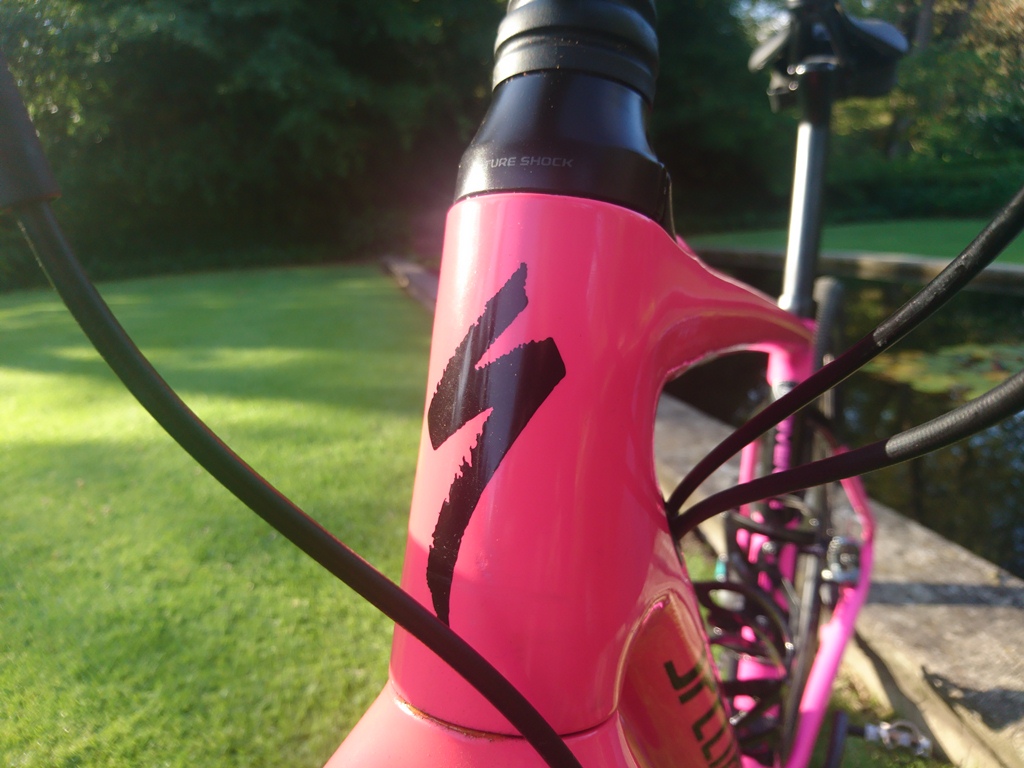 The Diverge models with a Future Shock feature a shorter head tube to keep the front end low.

Now I regularly ride worse gravel roads than most people would consider fit for narrow tyres. This is in no small part due to the fact that I live on a farm and the road to my house tends to get very rutted by the winter rains and storm water run-off. If you are going to be racing a Diverge you probably won’t ride it on roads that rough, because a hard tail mountain bike will be more comfortable and faster in those conditions. Plus you will in all likelihood have the good sense to avoid potholes rather than steering into them.

The other concern I have is over long-term use. My 2016 Diverge eats headset bearings. I have to replace them so regularly it has become the first thing I say when I start listing the issues to any mechanic about to service my bike. My estimate is that a set of headset bearings last about 500km; or considerably less if the terrain is rougher. I worry that the Future Shock, located as it is above the headset bearings won’t significantly reduce this issue. And worse, I fear that the Future Shock will require servicing at the same interval. * While headset bearings are R150 or so a set I don’t know what a Future Shock service will cost but it can only drive up the running cost of the bike. Again though if you are racing and are looking for speed above all else then the extra maintenance cost won’t be a significant concern.

* Specialized South Africa’s very one the ball marketing team tell me that the Future Shock technically has no service interval. But should the wear and tear of gravel road riding cause it to stop working the entire unit is replaced. That cost is currently R630. They are bullish about the lifespan of the Future Shock hardware though and don’t expect you’ll need to replace them anywhere near as regularly as I have to replace headset bearings. 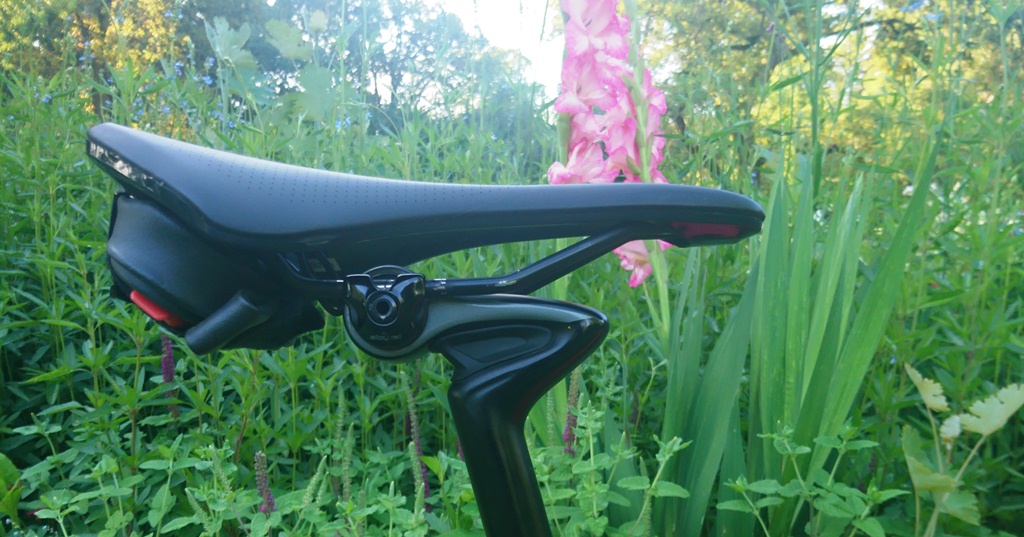 The cobble gobbler seat post. I don’t really have any thoughts on it. Sorry.

All told I toughly enjoyed the 2019 Specialized Diverge Expert X1. It is fast, capable and comfortable. It is definitely faster and more comfortable than my old 2016 model. Though there are enough similarities between the two to help me feel at home on the new model immediately. And with the deep section carbon wheels the Expert level bike build is impressive for the R78 000 price point. 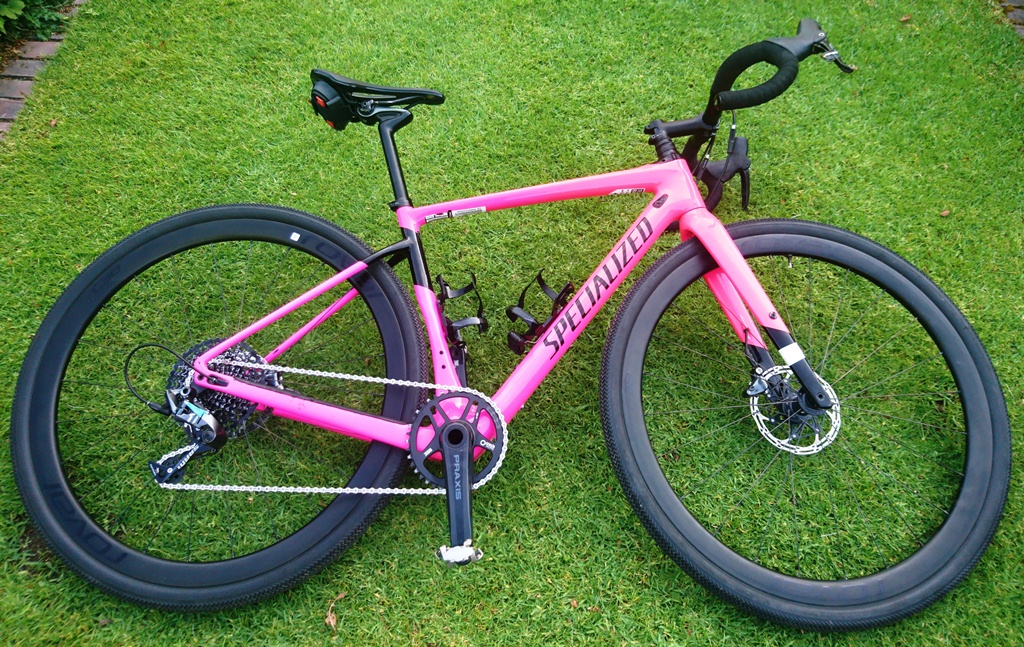 Roval’s C38 wheels are a game changer on this bike.

Good looks matter too and who can deny the Diverge is pretty in pink. Plus there are those drop stays… If you are looking for a bike to race in gravel races then the Specialized Diverge could be the bike for you. Handily you can find out for yourself by speaking to your local Specialized dealer about a test ride. 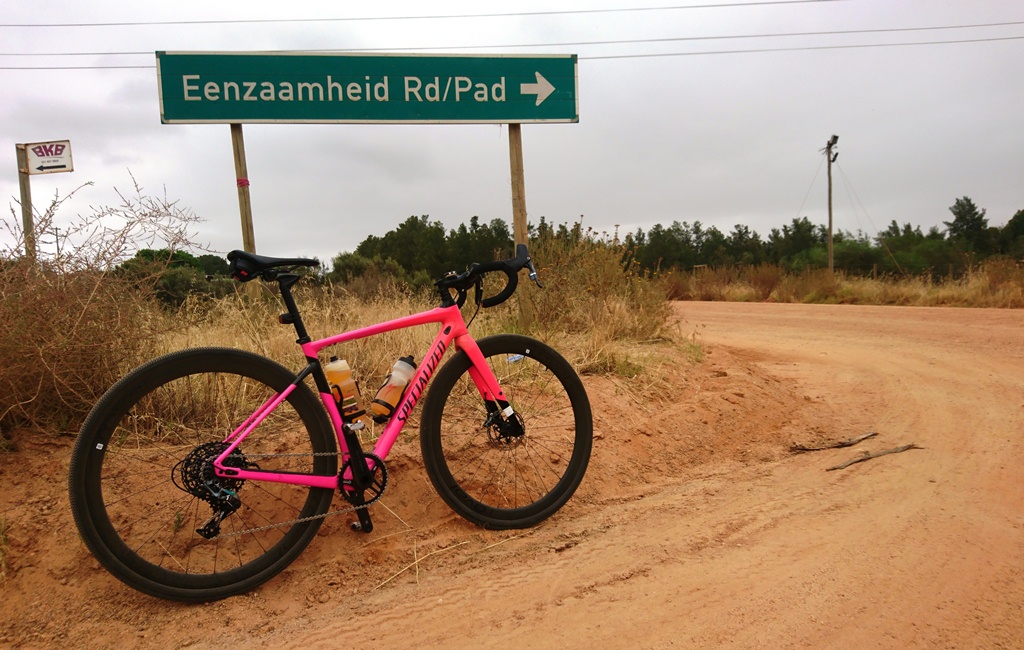 It looks good in its natural habitat too. 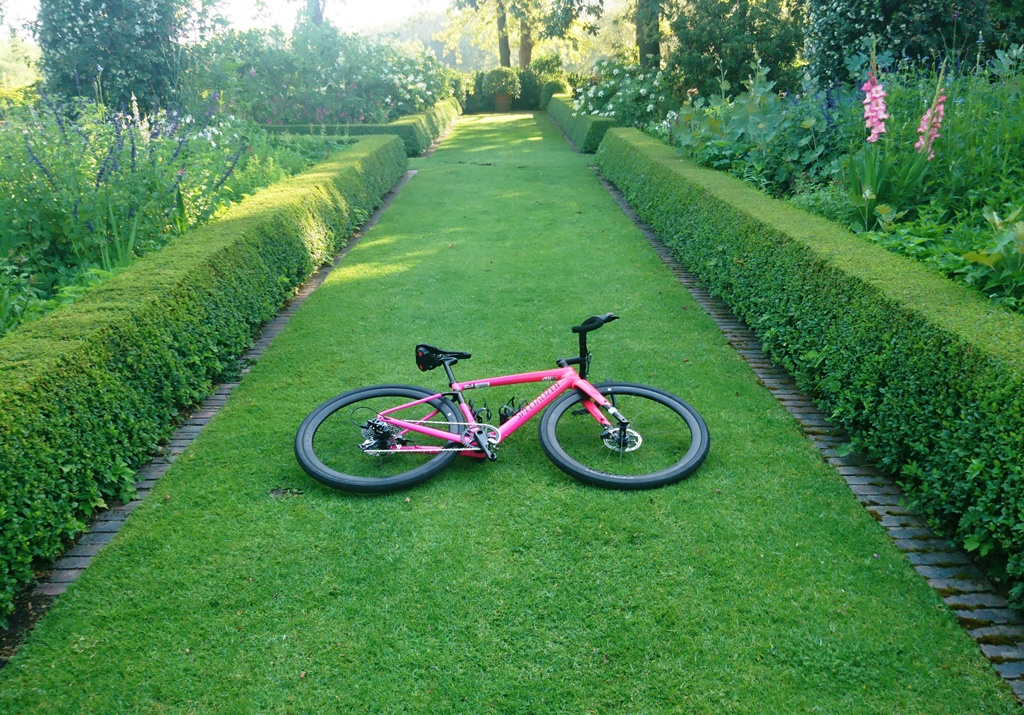 Check it out on the Specialized South Africa website. 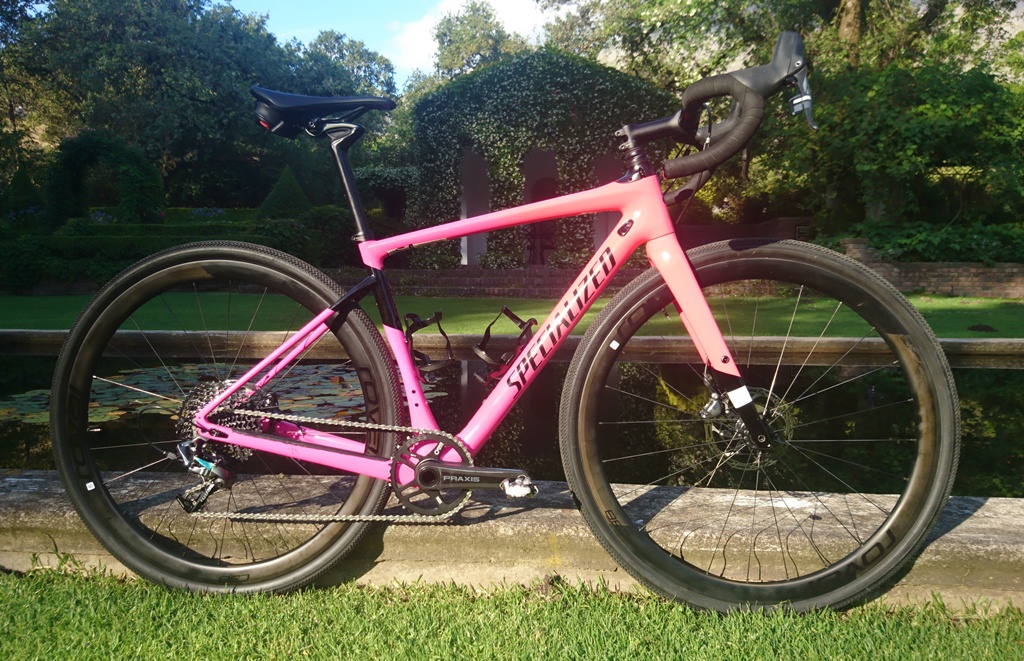 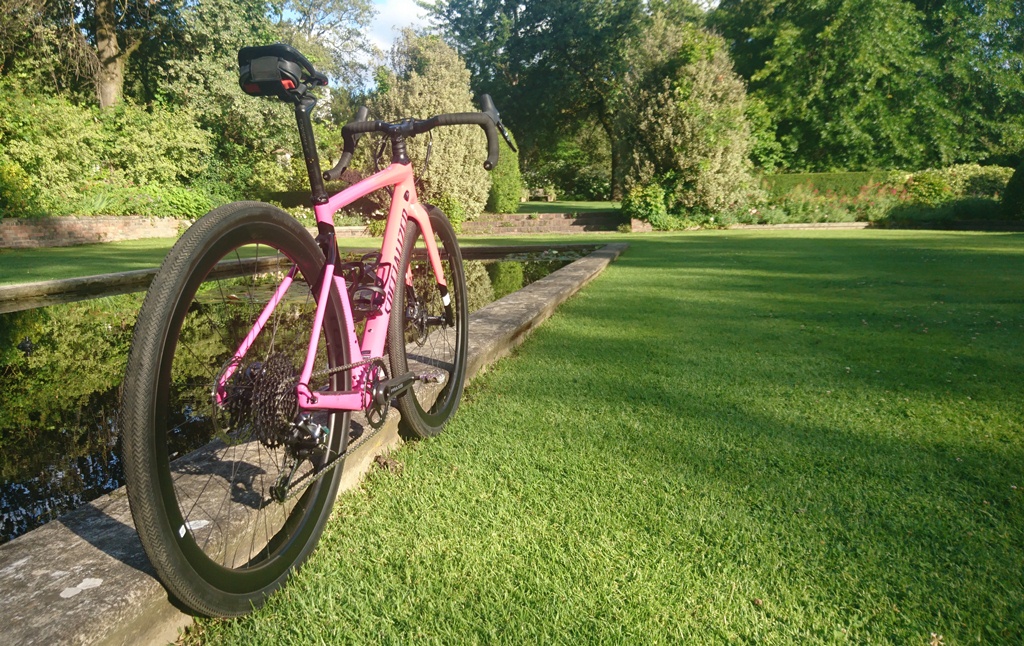 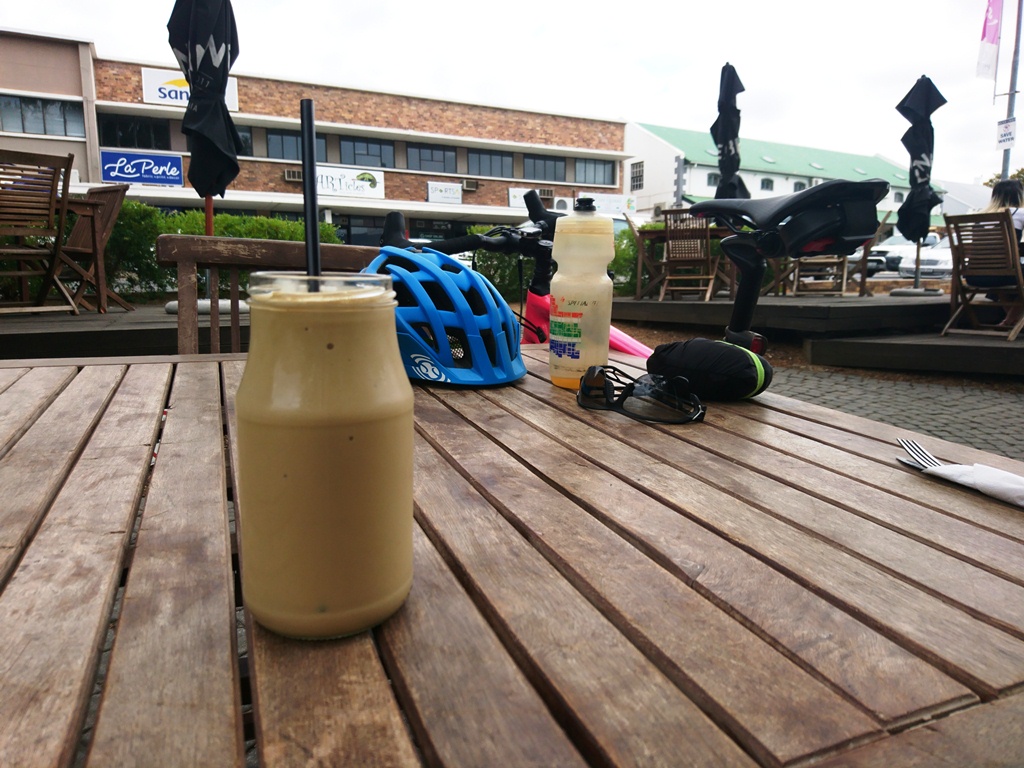 Any bike that takes you to places where you feel like you’ve earned a milkshake is a winner in my books. 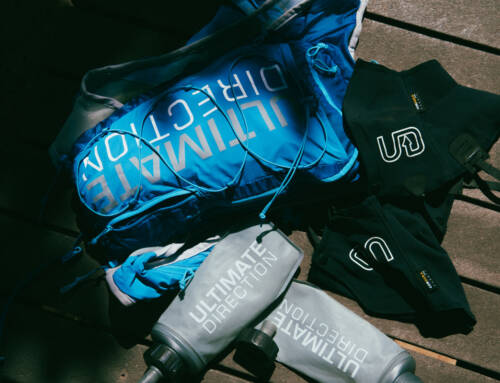 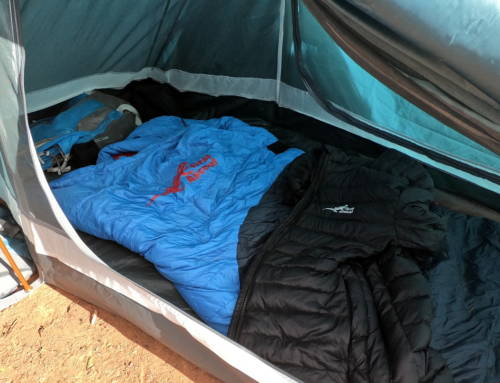 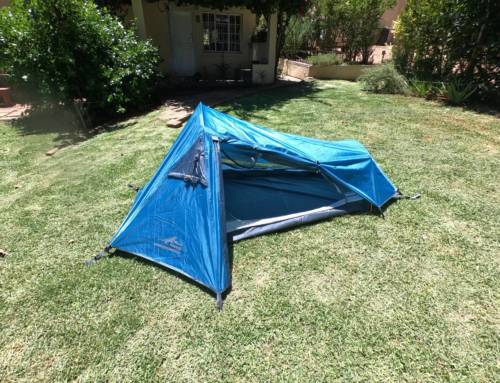 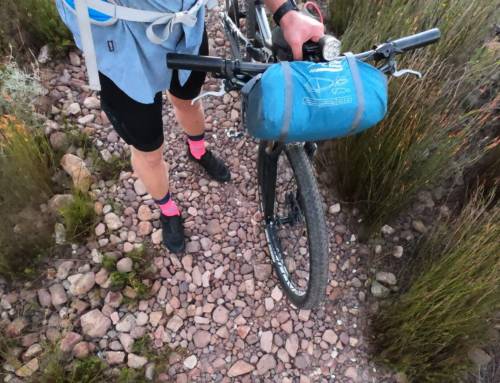 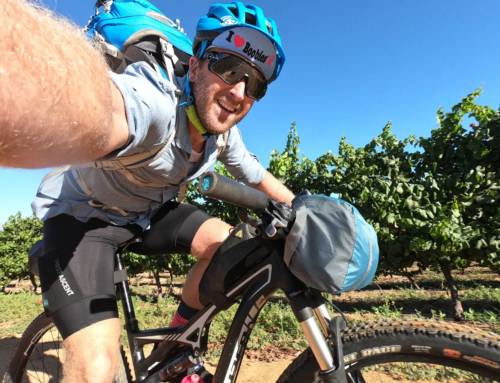