Lombard had made no secret of his intentions to contest the victory in the build up to the Discovery George Mountain Ultra Trail, which is best known by the abbreviated Discovery MUT. To achieve that goal he set out fast and had established what he estimated to be a 5 minute lead half way up the Cradock Pass climb. The pre-dawn start caused Lombard to take a wrong turn though. “I went off route for about 5 minutes, but fortunately I saw Roelof’s light” the race winner explained. The pair then stayed within sight of each other for the next 40 kilometres. 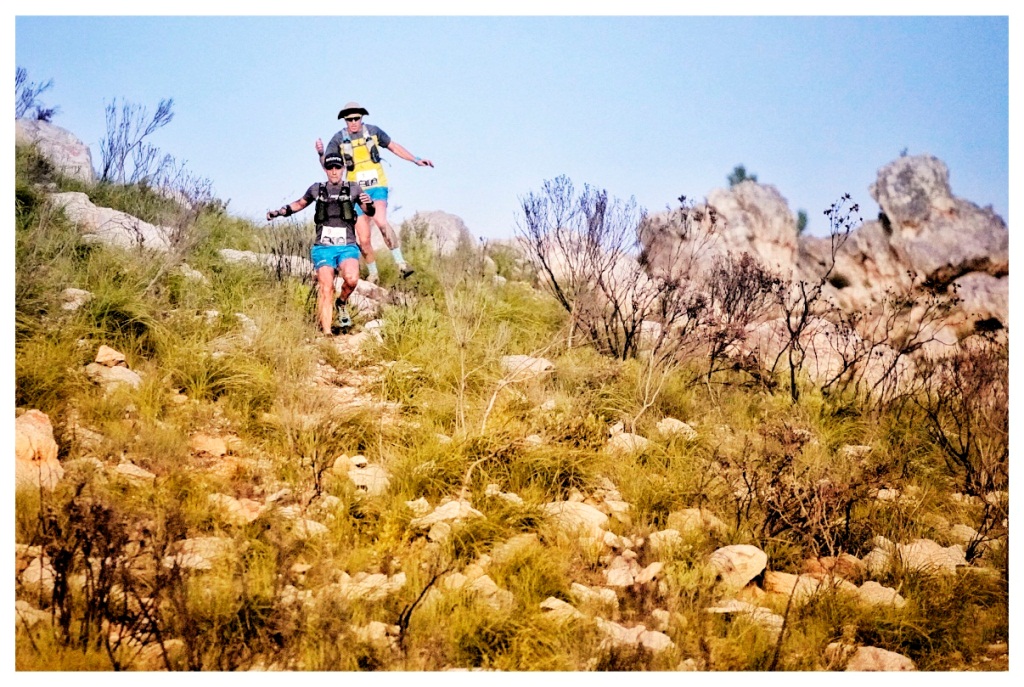 Brendan Lombard leads Roelof Mostert down a descent during their battle for the Discovery MUT victory which lasted for much of the race. Photo by Jacques Marais.

“I’ve never raced an ultra like that” Mostert confessed. “Usually the field splits up with everyone running their own pace, but Brendan and I ran together like it was a 25 or 35 kilometre race. By the 38 kilometre mark I was pretty broken” the second placed finisher elaborated. “Brendan simply outclassed me today” he retold, recounting how Lombard kept up a relentless pace in the closing 15 kilometres. The man from Cape Town eventually distanced Mostert towards the end of the Tonelbos section in the run into to Check Point 7, at the 55 kilometre mark.

“It is probably the toughest 60 I’ve done” Lombard puffed upon crossing the finish line at the Witfontein Forest Station. “It has got a bit of everything and it’s proper technical. It was a proper dog fight with Roelof. We ran quite a bit together. I pushed it on the climbs but technical downhills are sort of my downfall so he would come past and I would fall in behind him. When we reached those runnable jeep tracks I just decided ‘let’s put the hammer down and go’” he elaborated as to how the race unfolded. 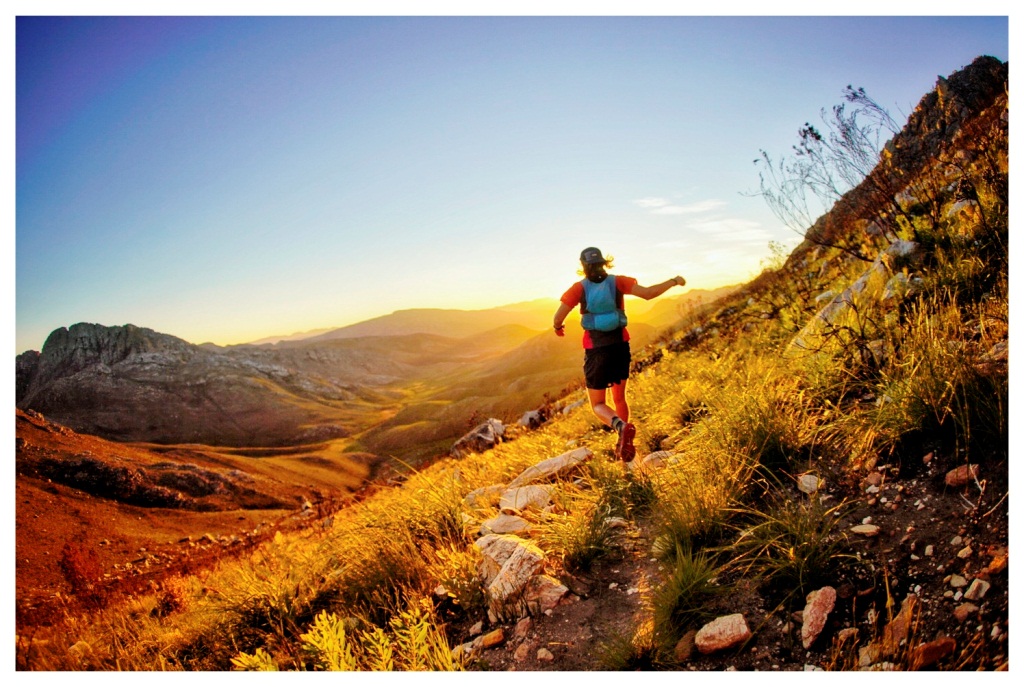 For many of the runners taking part in the Discovery MUT the sun only rose well into their circumnavigation of the Outeniqua Mountains. Photo by Jacques Marais

Women’s race winner Scholtz had a lonelier run to victory. “It was fun” were the first words out of the new Discovery MUT champion’s mouth upon crossing the finish line. “I really enjoyed it. It was a tough day out but it was beautiful. I felt very strong, had some hiccups along the way but it wouldn’t be an ultra without them. But overall I’m very happy” Scholtz smiled. 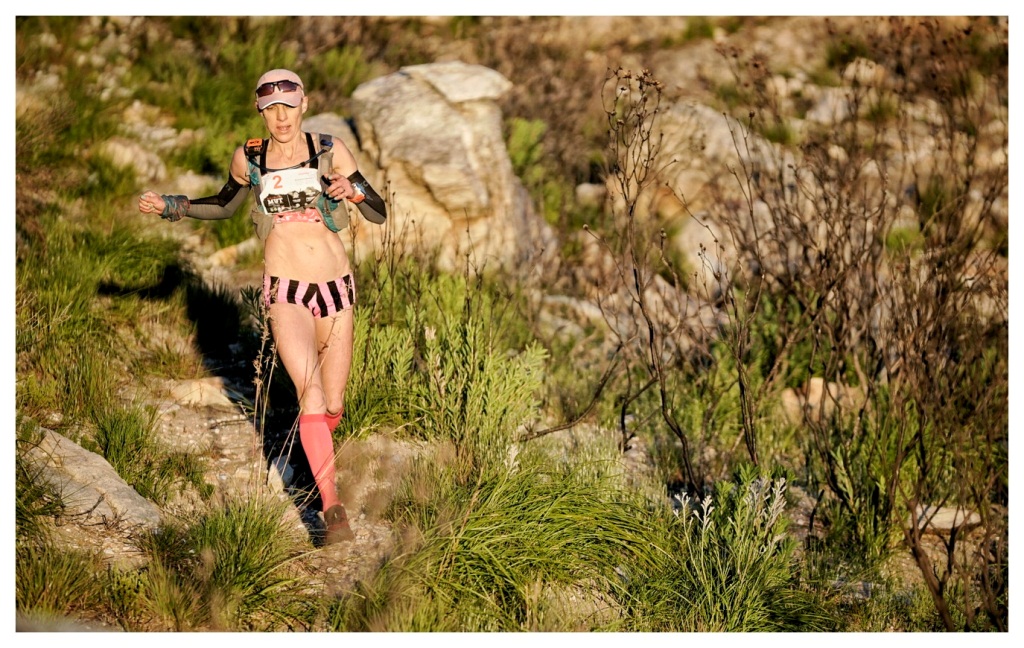 Chantel Nienaber, an erstwhile George local, raced to second position in the 60km race in the Discovery MUT. Photo by Jacques Marais.

The trail runner from Port Elizabeth was joined on the podium by former George local Chantel Nienaber and Mia Uys, a Stellenbosch University post-graduate student. Scholtz’s winning time was 8 hours, 37 minutes and 54 seconds, which was good enough to see her place sixth overall. Nienaber crossed the line 39 minutes and 21 seconds later, while Uys finished just over an hour after Scholtz.

The shorter distances were if anything even more fiercely contested. The 25 kilometre race in particular saw exceptionally fast times with both the winner and second placed man breaking AJ Calitz’s 2018 course record. Making that fact more remarkable was the increased technicality of the 2019 route. Johan Cronje, the South African 1 500 metre record holder and 2013 World Championships Bronze Medallist ensured the pace was frantic from the off. The erstwhile track star was making his trail running race debut and had never completed a 25 kilometre run off-road; but that did not hold him back. He blitzed the course in a time of 2 hours, 6 minutes and 49 seconds. 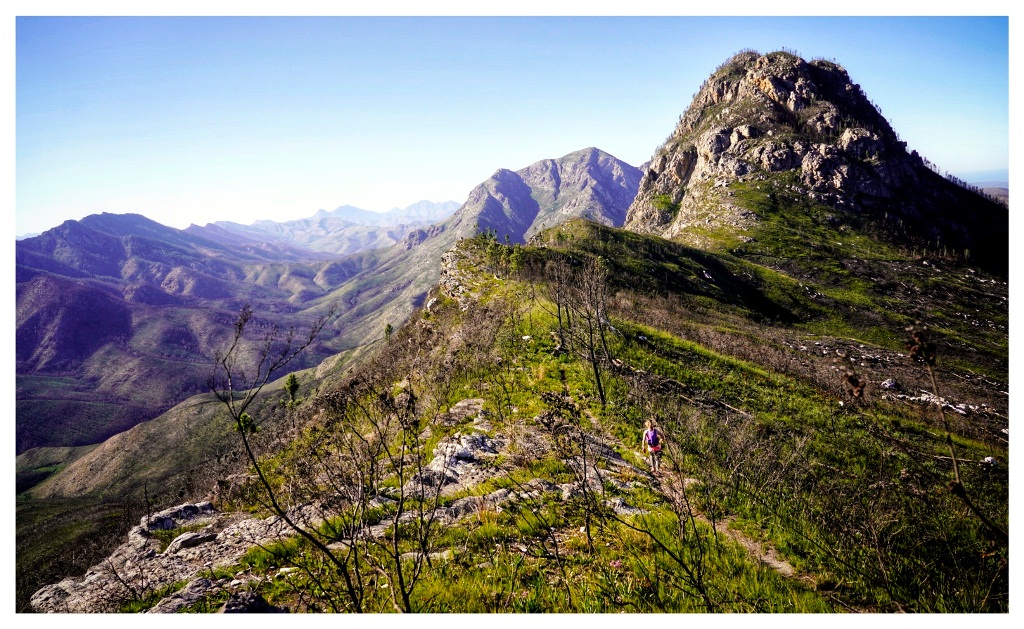 Anderson Ncube crossed the line 8 minutes and 58 seconds after Cronje; recounting how he had seen the winner fall at least twice on the Cradock Pass descent. Cronje’s falls clearly did not slow him down. His buffer to Rohan Kennedy, who finished third, was a comfortable 13 minutes and 57 seconds despite his tumbles.

The women’s 25 kilometre race was won by Ritsa Fouche in a time of 2 hours, 49 minutes and 45 seconds. Her nearest rival was Marta Jekot who finished 3 minutes and 15 seconds back. George resident, Rose de Jonge, complete the podium after overcoming the set-back of a nasty fall inside the first 5 kilometres. 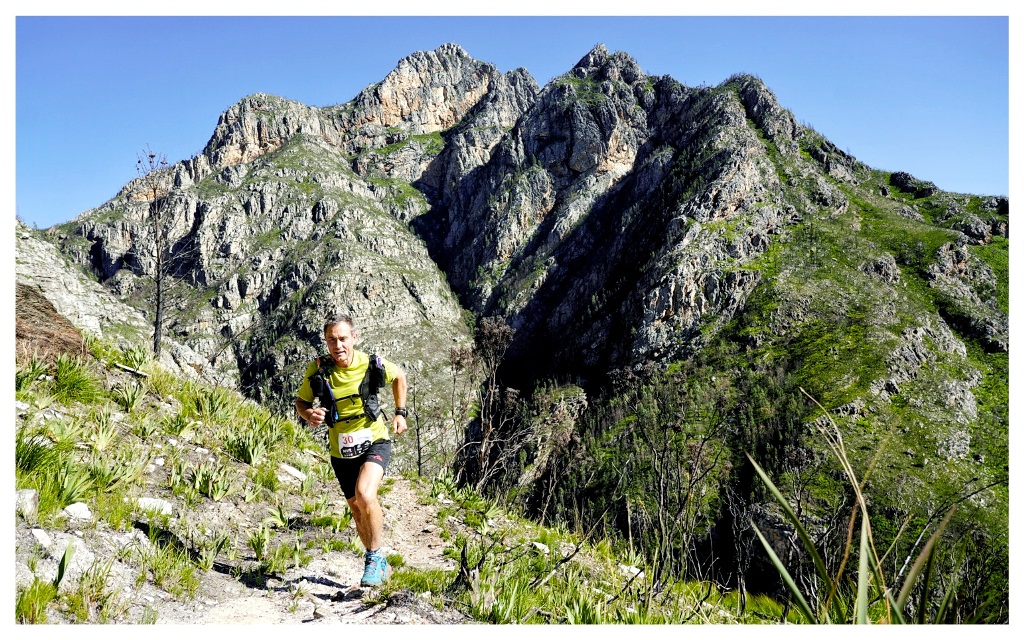 Riaan Nieuwoudt makes his way up a technical climb during the 60km route of the Discovery MUT. Photo by Jacques Marais.

Seldom has a 9 kilometre been as tough as the Discovery MUT’s shortest distance. It like the longer distances featured true mountain running but none-the-less Warren Langridge and Marc Wierzba managed to dip under the hour mark. Langridge took the title in a time of just 55 minutes and 7 seconds; Wierzba was second 4 minutes and 11 seconds slower. Douglas Stanley rounded out the men’s podium. The women’s race over the shortest distance was won by Knysna’s Jess Devine. The 17 year old completed the very challenging course in 1 hour, 10 minutes and 18 seconds, 2 minutes and 56 seconds ahead of Trude Carstens. Ane O’Kennedy was third, just 14 seconds behind Carstens.

On Monday the Discovery MUT activities continue with the Vertical 1K challenge. The final event of the #MUTlife weekend is free to enter and takes place from the Ground Zero Bike and Trail Park in George. To take part in the Vertical 1K runners need to be at Ground Zero at 10h00 on Monday. Entry is free and runners will stand the chance of winning spot prizes, while the King and Queen of the Mountain will each receive a pair of 100% Sunglasses.

To relive all the action from the 2019 Discovery MUT please visit the event’s Facebook page George MUT, where you will be able to view all the photos and videos from the race. For more information, visit www.georgetrailrun.co.za. 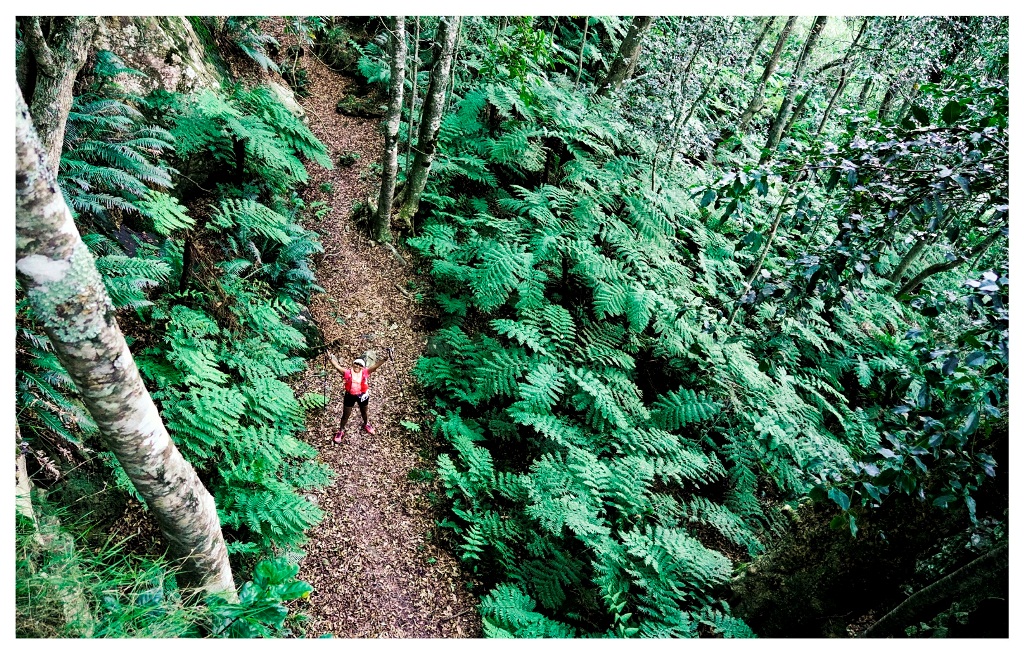 The Discovery MUT did not just feature mountain top panoramas but also a few trips through the Outeniqua Mountains’ hidden indigenous forests. Photo by Jacques Marais. 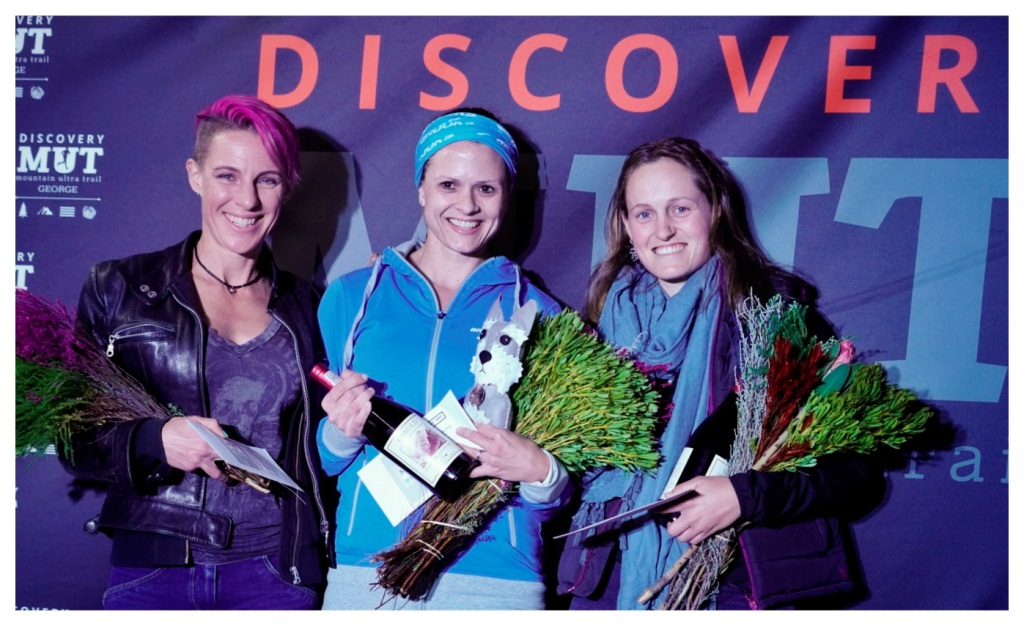 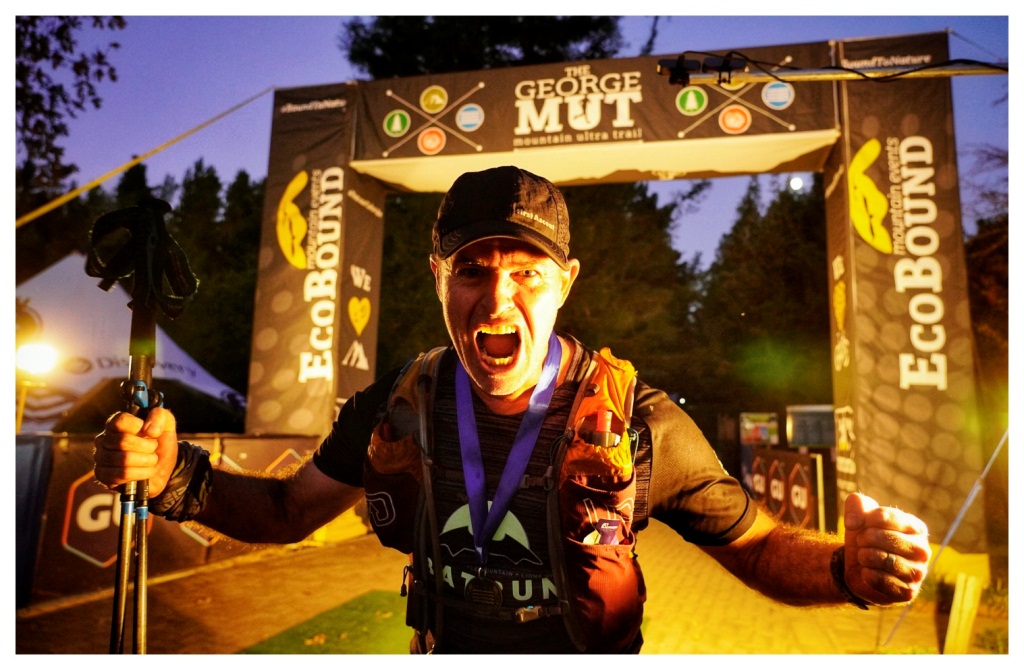 Finishing just before last light was definitely worth celebrating after a brutal 13 hours on the trails of the Discovery MUT. Photo by Jacques Marais.

For the full results from the 2019 Discovery MUT visit www.mobiielite.com. 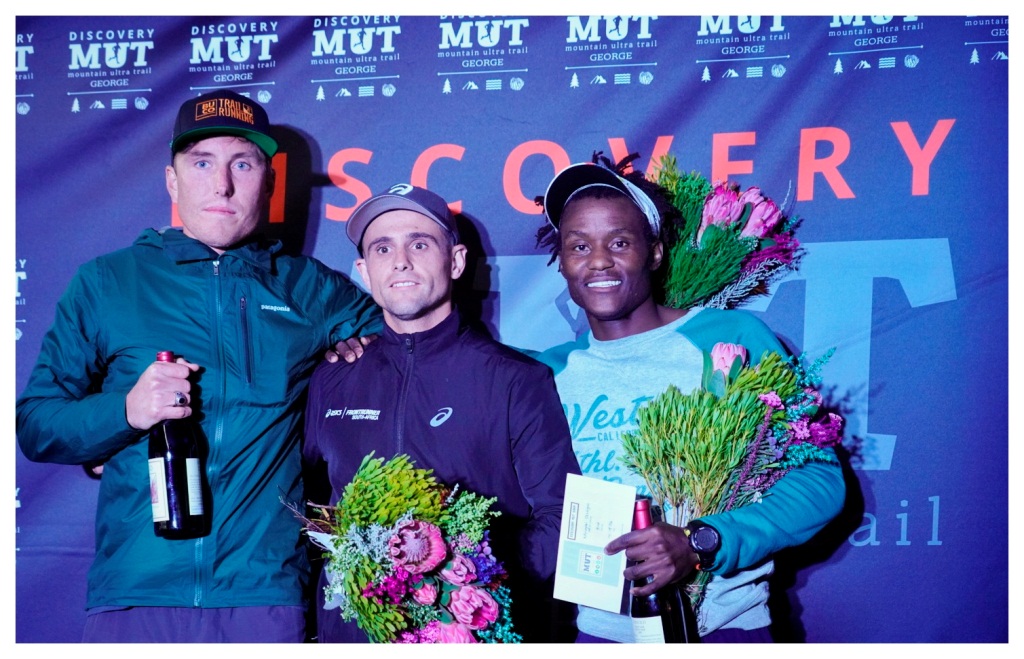