The 2019 Trans Baviaans, which took place in the Eastern Cape on Saturday 10 August, was won by the dormakaba and Galileo Risk teams. They and their fellow competitors in the Trans Baviaans Race, the first of two events, had to brave the roughest conditions in years on the traverse through the Baviaanskloof. Floods in the build-up to the race left the usually smoother roads in the first 100 kilometres, of the 230 kilometre long route, in a rutted condition.

Those ruts would be felt later rather than when they were assaulted, on fresh legs, because a steady tail wind blew from the North West as riders left Willowmore for Jeffery’s Bay. A frenetic pace was set from the off by the Hausberger team, of Werner Roux and Jono Cloete. Roux revealed at the finish that it had not been part of their race plan. “Jono [Cloete] attacked in the first kilometre” he said shaking his head. “We hadn’t even left Willowmore yet. I didn’t want to follow but I didn’t really have a choice.” 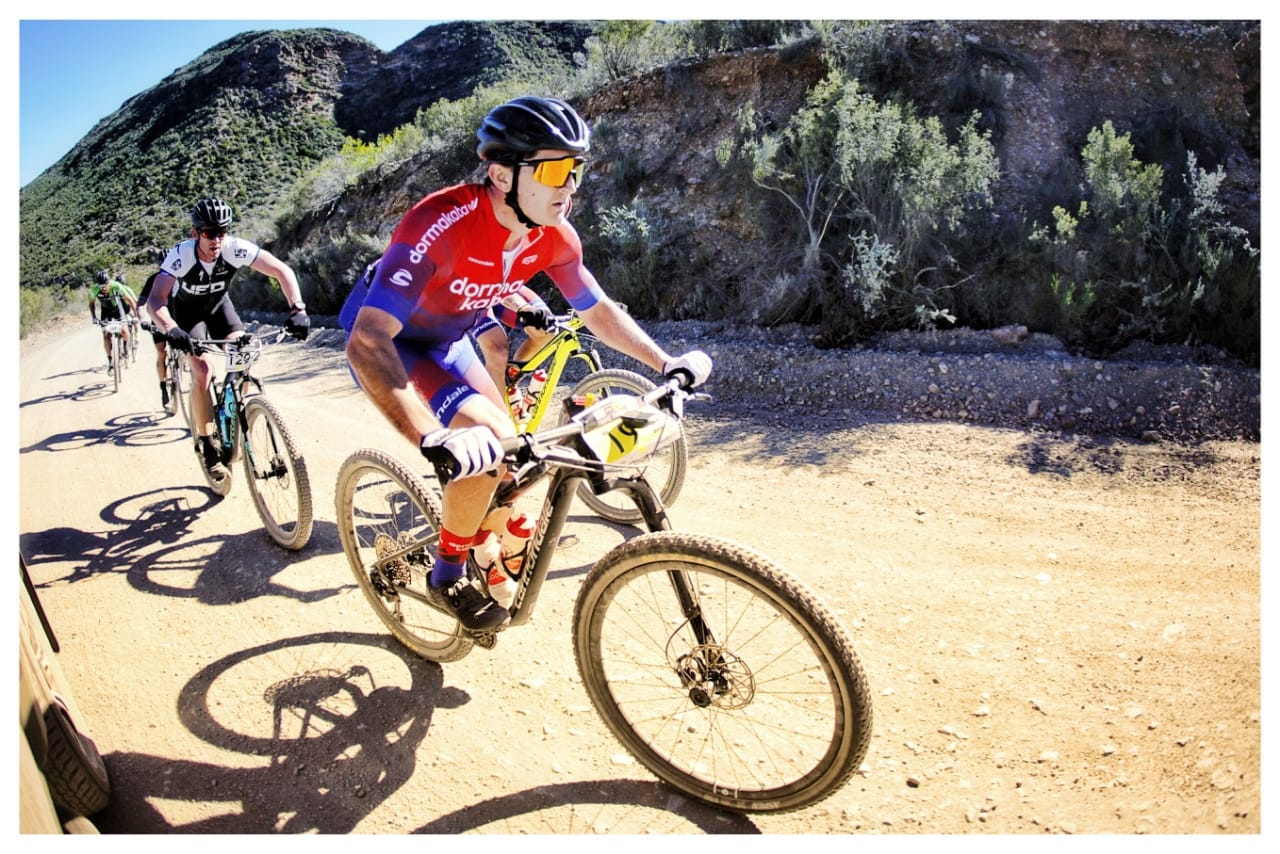 Derrin Smith, of dormakaba, leads the reduced group from which both the first and second place at the 2019 Trans Baviaans Race came. Photo by Jacques Marais.

Cloete’s brave move echoed the acceleration by Gert Heyns and Arno du Toit in 2018, when the pair set the current course record. It also played into the hands of the race favourites, Mike Posthumus and Derrin Smith, of dormakaba. “It suited us, them [Roux and Cloete] making it so hard” Posthumus recounted. “It forced quite a select group to form; with them, us and the guys from ProTouch. We got away and then at 90 kilometres we saw them hesitating at a Check Point and we [Smith and Posthumus] pushed on from there.”

“It was a solo ride from 90 kilometres” he continued with a grimace. “It was awful. It was so rough. I had between 10 and 15 chain-drops off my chainring and had to keep stopping to put that back on and then chase back. So that burnt a few matches. Then Dez [Smith] started cramping with about 120 kilometres to go. It was a rough second half for him and I started cramping too, but luckily not as bad as him.” 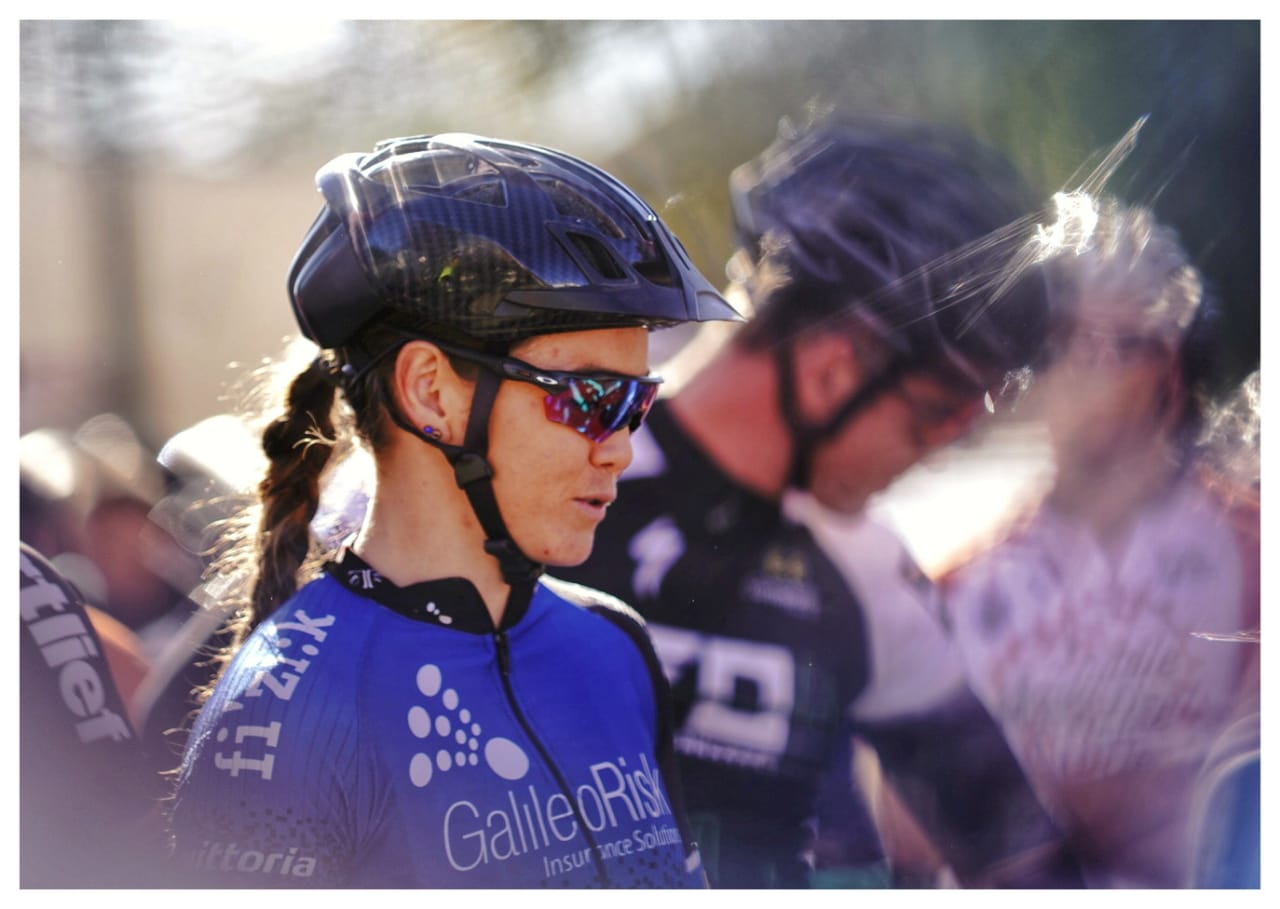 Galileo Risks Sarah Hill contemplates the challenge ahead as she lined up to start the 2019 Trans Baviaans in Willowmore on the morning of Saturday the 10th of August. Photo by Jacques Marais.

Addressing the slip; which saw them penalised with a 20 minute time addition Posthumus explained: “We made an error at Check Point 7 by not taking our lights.” “The plan had been to beat the setting sun. And though we didn’t manage it technically, at least we didn’t need our lights” he laughed off the mistake which ended up not costing them too dearly.

Having crossed the line 28 minutes and 53 seconds ahead of Roux and Cloete; but 19 minutes after their targeted time of 8 hours the 20 minute the penalty did not deny them the win or a personal best. Posthumus, Smith, Roux and Cloete were joined on the podium by Jaco Davel and Ignus Oosthuizen. Davel and Oosthuizen had suffered their own cramps earlier in the race but stormed through the final 50 kilometres to overhaul the ProTouch team of Pieter Seyffert and Myles van Musschenbroek. Seyffert and Van Musschenbroek had been among the race’s main protagonists, so slipping from the podium was exceptionally cruel; but that is the nature of the Trans Baviaans. It often provides a vicious sting in the closing kilometres as the accumulated effects of 8 hours of racing starts to tell. 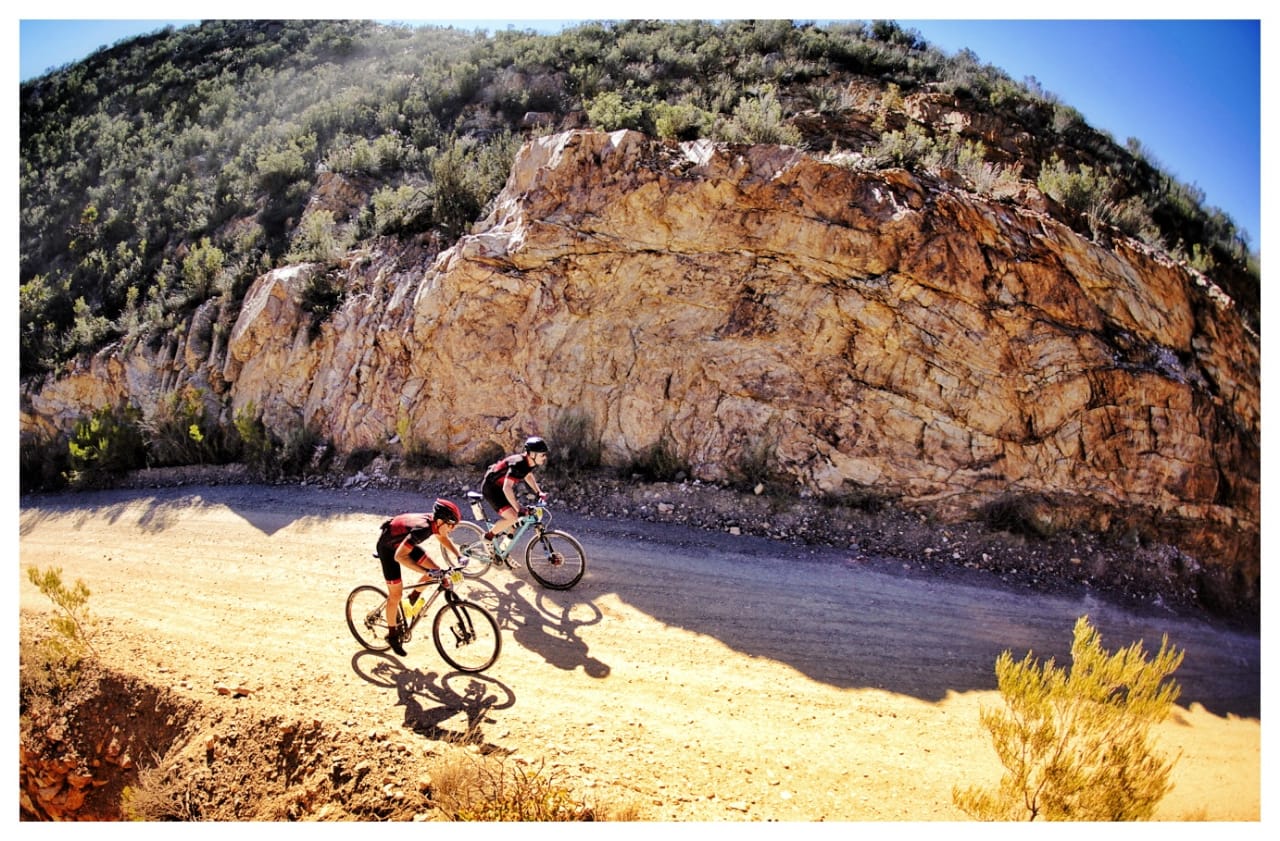 Two riders who know exactly how to pace their efforts, in the Trans Baviaans, are Galileo Risk’s Theresa Ralph and Sarah Hill. Having won the previous two editions together they use the race as a benchmark for their development as a team. “Today we really pushed hard” Ralph said, just after crossing the finish line. “Sarah [Hill] has grown so amazingly. I remember the first one I did with her, I could have pedalled with one leg. Now she’s putting me in the hurt-locker for a lot of the race. We really had a good dynamic, sharing the load.”

“The corrugations were a lot like the first time we rode the Trans Baviaans” Hill added. “And the headwind was so tough. There was a time when I thought there was no way we would even get close to our record, especially on the Neverender. But then we found such a good rhythm and we were feeding off each other’s energy. We ended up getting so close… so we’ll have to try again next year” Hill laughed. 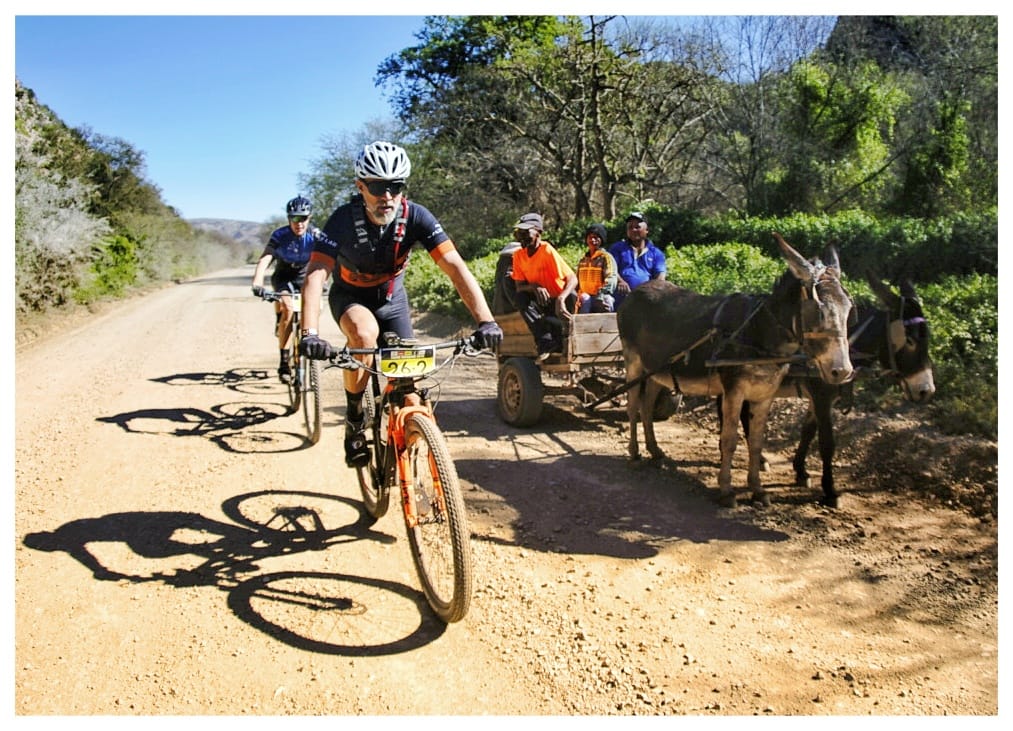 Ralph and Hill were joined on the women’s podium by former Olympian and 2009 IRONMAN South Africa champion Lucie Zelenková and her partner Laura-Beth Eicker-Harris. The third placed team was the Kekkel en Kloek team, of Nickey Botes and Esmari de Wet.

In the mixed category there was a proposal on the finish line after Tanya Kirstein and Christo Roos had raced to victory. Fortunately for Roos the endorphins of the win were clearly running high as Kirstein accepted instantaneously. The newly engaged couple were joined on the podium by ECC-Bestmed’s Anriette Schoeman and Kevin Taljaard; as well as by Urcycling’s Mariske Smith and Wayne van der Walt.

To further relive the 2019 Trans Baviaans Race mountain biking fans can follow @EcoBoundEvents on Twitter or @transbaviaans on Instagram. Additionally liking the Trans Baviaans Facebook will provide access to photos and videos from the race. The action commences next weekend, on Saturday 17 August, with the Repeat; which will see a more social ride from Willowmore to Jeffery’s Bay take place through the magnificent Baviaanskloof. 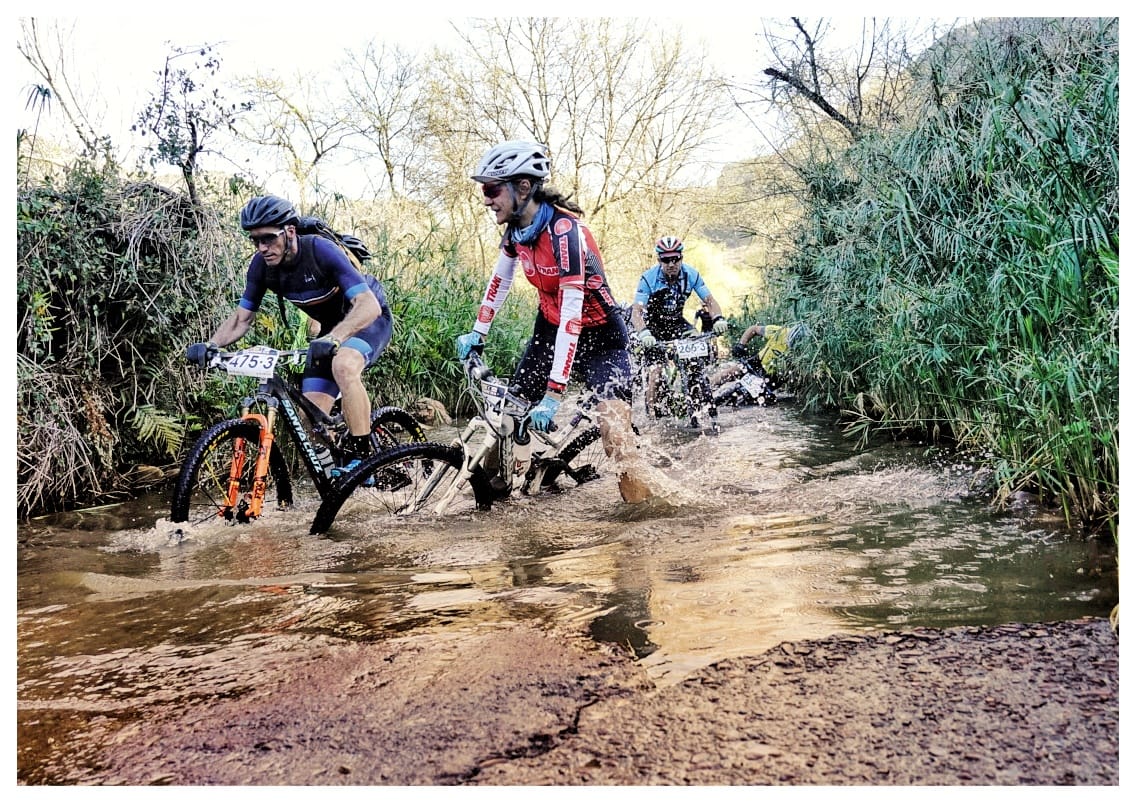 The Langwater crossing  which comes 123 kilometres into the route, in the middle of the Baviaanskloof Nature Reserve  caused more than just wet feet in 2019. Photo by Jacques Marais.