Big wave spots are by their very nature intimidating places, the waves are rapidly moving apartment block sized hunks of blue liquid, the impact zone is a churning mess of foam and eddies and the topography of the ocean floor is best left unconsidered. Especially in the Cape, where what lurks beneath is treated by the simple principle: out of sight is out of mind. Bay View might not be Dungeons or Sunsets, but it’s still no place for the faint hearted.

Big wave chargers no doubt have to overcome their perfectly rational fears, in order to force themselves down the faces of those massive waves. Confidence in their abilities takes the edge, of razor-sharp blind panic, off it somewhat, but still the basic human survival instinct must be screaming: “Get back!”

It’s a little voice of reason, distilled from the ingrown wisdom produced by millennia of successful breading and surviving. Some people however, have locked whoever produces that little voice in a padded cell deep within the dark recesses of their minds. One such individual is my dear friend, Ryan Hill. Perhaps it’s being stuck in Upington for months on end which played havoc with his sensibilities, but in hindsight, paddling out at 10 to 15 foot Bay View wasn’t a great plan, at that particular point in time for him.

What made it so was the fact that he didn’t have a board for it and being unwilling to risk his standard 6’2”, decided to lend a board from Mark. Now the only board Mark was willing to part with was the 6’5” he first learnt on, which, having started its surfing life sometime in the late 90’s was rather yellow and soft around the edges. Ryan wasn’t the only one paddling out on a borrowed board however. 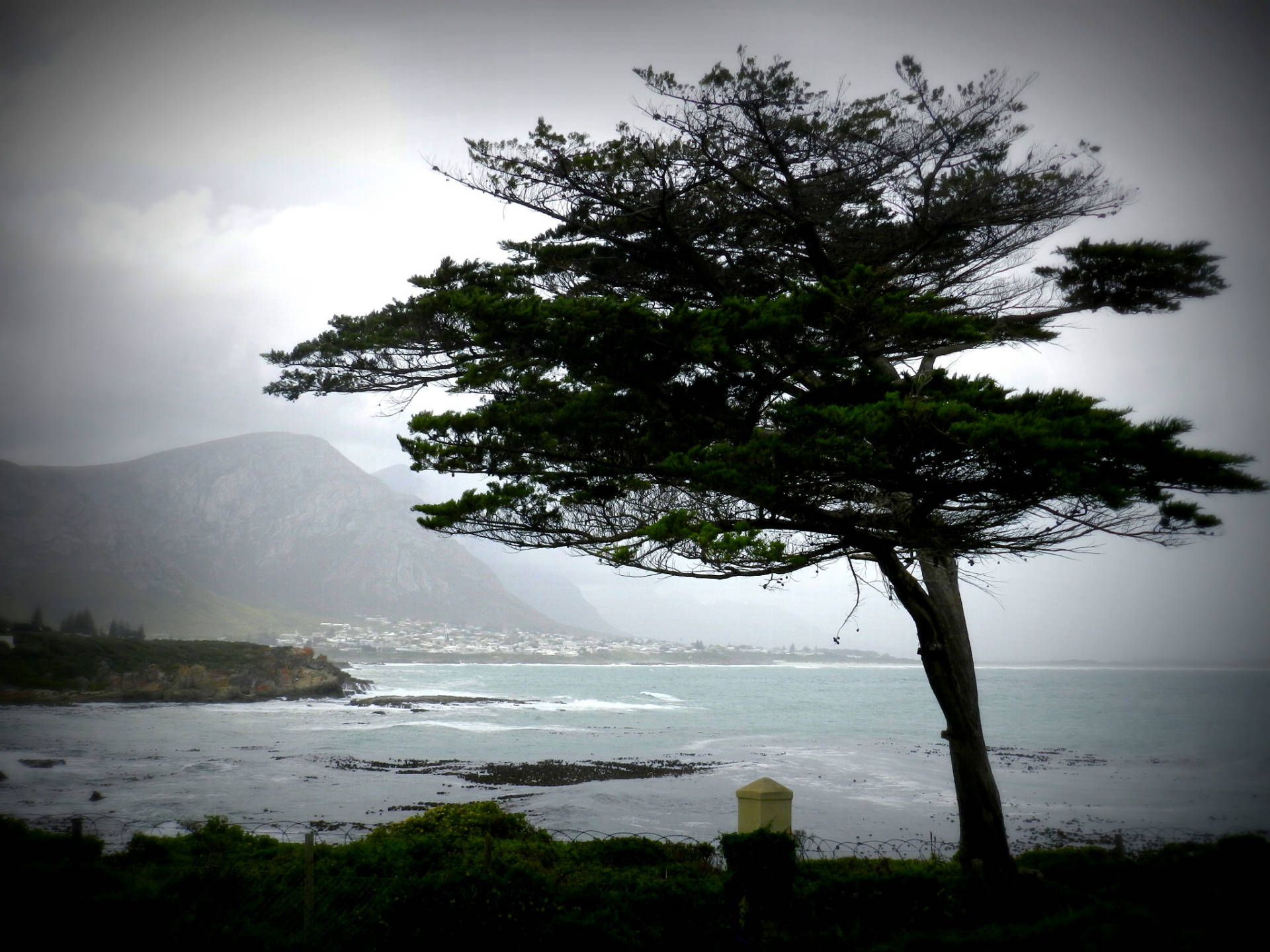 The battered sentinel watching over Bay View on a less postcard perfect day.

Pat le Vieux too was on a borrowed stick, though his at least was a 7’ something semi-gun, belonging to Bjorn von der Heyden, designed for those bigger days at the Kom. Only the main instigator, of the Bay View mission, Bjorn was appropriately equipped for the magnitude of the task ahead. But he needed sidekicks for the surf, because with whales calving in the waters below the scenic Hermanus cliffs, other less benign behemoths might well be lurking just beyond the breakers.

It was one of those rare days, absolutely wind-still with long period ground-swell ranging in from the South West, perfect conditions for pretty much every spot up or down the Cape coast. Bjorn had chosen Bay View and convinced Pat to join him, Ryan needed no convincing (nor would he listen to arguments for the merits of exercising caution). As for the rest of us, it had all the makings of a spectacle, so we abandoned our surfing plans and accompanied for ‘moral support’ or the (disquiet) hope of seeing something heavy. With the cliffs overlooking the break so close to the action, it is a better spot to witness big wave bravery from than a pitching and rolling boat in the channel at Dungeons.

From our perch up on the cliff tops we watched as Bjorn, Pat and Ryan made the jump and paddled across to the take-off spot, nerves clearly evident by their initial deep and wide choice of waiting point. Bjorn eased into the session, easily stroking into a couple of smaller 10 footers, letting his rhino charger do the work form him. Pat had to work a little harder for his waves and moved in towards the peak to get his first wave. Ryan meanwhile was scratching like a man possessed, but to no avail. He simply couldn’t gather enough momentum to force himself over the crest and down the swiftly moving waves. Egged on by Bjorn he kept moving further inside, waiting for a wave sheer enough to negate the need for a bigger board.

This could have proved a disastrous error, but fortunately for Ryan an eight-footer came through before a fifteen-foot clean-up set did. That was where his good fortune ended though. He scratched up enough speed to launch himself down the face, navigated a small bump near the crest and then half way down came spectacularly unstuck. Hitting boil induced chop he was flung forwards, fins free of the face, his board shot out ahead of him and as his head reconnected with the growling wall of water behind extending his leash to its maximum. Stretched taunt the frayed old Velcro wielded without much of a fight, leaving Ryan to be mauled without floatation while the board bounded unhindered towards the rocky shore. 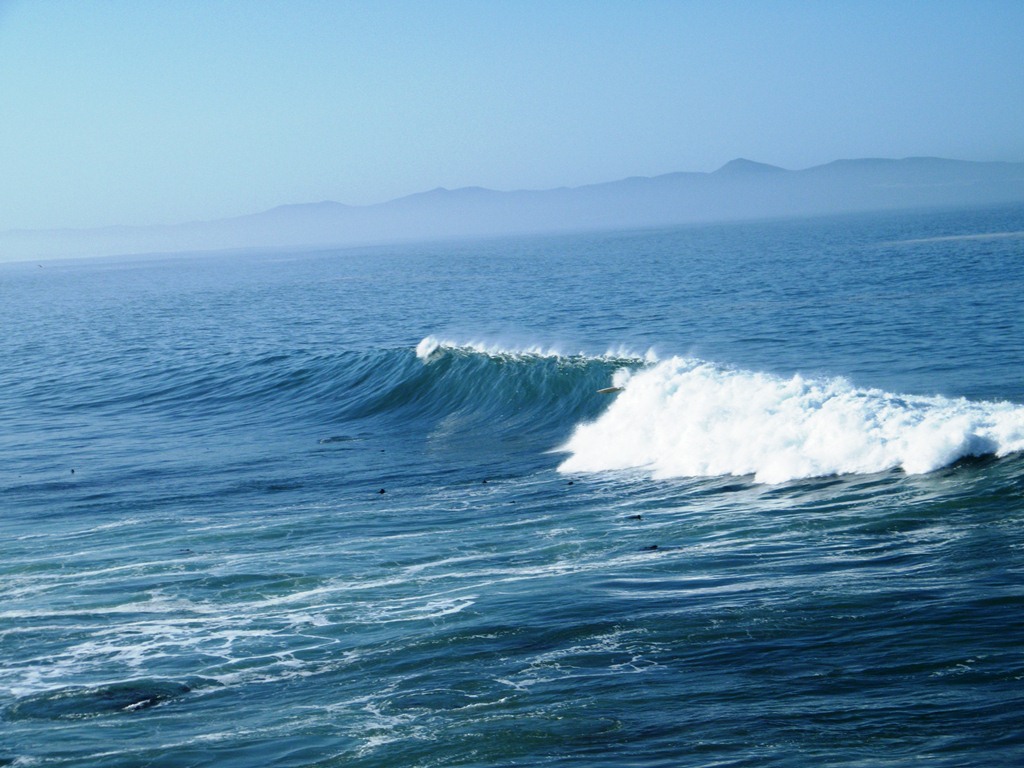 What happens when you come under-gunned.

Up on the cliffs we were powerless to help, Ryan though seemed less than concerned. Unable to navigate the entry point without a board he swam back to where Bjorn and Pat were trading waves. He wouldn’t have to wait long for company in the category of bad locations to be without a floatation device. So perhaps it was better that the pack of seals following him dissuaded him from attempting the swim around the corner to the Old Harbour.

As if our nerves on the cliff top were not tested enough, by one swimmer in the water, Pat soon joined Ryan among the board-less. Having grown in confidence throughout the session Pat was given a little rude reminder by Neptune. Reliving it later Pat claimed the wipe-out wasn’t too bad, but when he surfaced he discovered only half the board tethered to his ankle. What did cause him and, to a lesser extent I’m sure, us, a few moments of panic was the fact that the loop of leash attaching him to the tail of the borrow board was entangled in a particularly stubborn kelp frond. He therefore took three involuntary deep dives and kelpy underwater swattings, as the remainder of the set which broke the board poured through.  After the third wave he cut his (and Bjorn’s) losses and undid the leash, leaving the remaining half a board to the mercy of the ocean.

On the cliffs, by this point we were in a state of nervous angst so palpable, that static electricity could have been harvested off us. We were toying with the idea of calling the NSRI, but the knowledge of stern words from the local chief, foolishly kept us from doing the right thing.

With three surfers and only one board between them even Bjorn was forced to admit defeat and so the three of them turned for the shore. With Bjorn semi-towing the swimmers like two giant rapalas. Traversing the ledge which forced Ryan to swim back out to sea earlier proved tricky, but somehow they managed with no bloodshed. Only luck and the brute strength, produced by the fear of knowing that hanging on at all costs to the tumbling mass of surfboard and flesh around them, saw them through the gauntlet of foam and razor sharp reef. 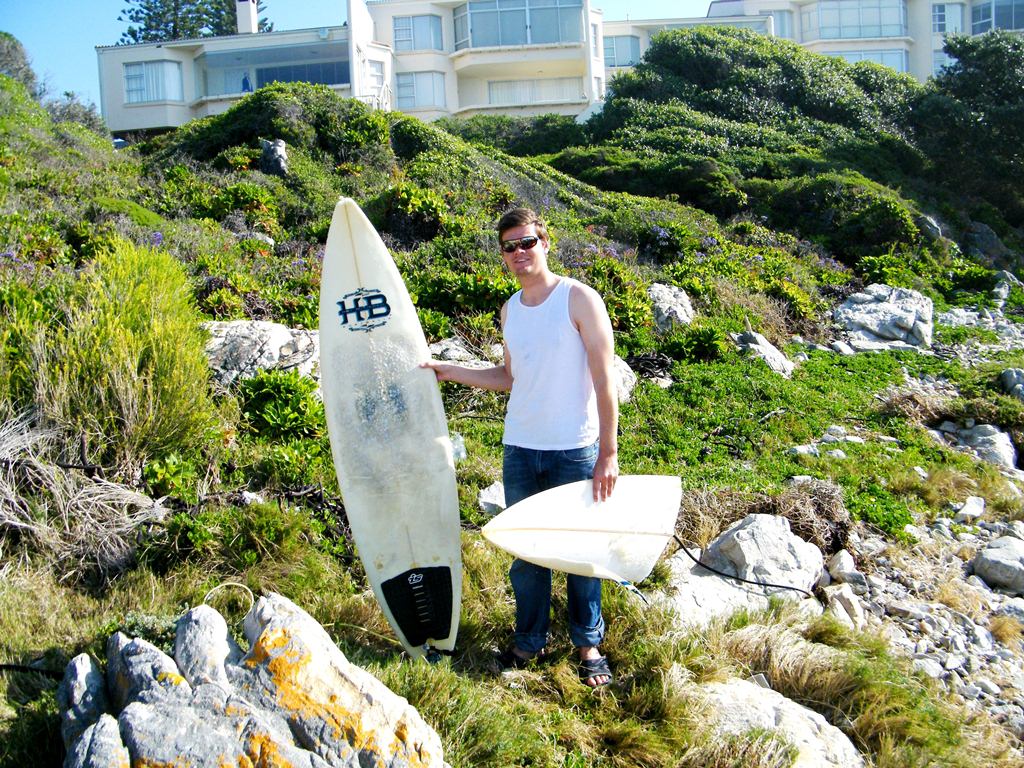 Once safely back on dry land we all relaxed and had a laugh at the seriousness of the situation. All of us, except Bjorn that is, he was not impressed at being a board worse off than he started the day. And though Mark and I managed to salvage the pieces, the damage was irreparable. So Ryan claimed them hopeful of being able to cannibalise the foam, though the pieces have yet to emerge as a wave-riding tool.

But I suspect they will, eventually, perhaps as some mutated fish inspired dumpster diver type board with massively large fixed fins, a pin tail and uneven dimensions. He will no doubt try to charge his Frankenboard at a heavy, seldom surfed reef and come painfully short. Then perhaps, he’ll learn that equipment is as important as having big brave balls, though knowing Ryan, somehow I doubt it. 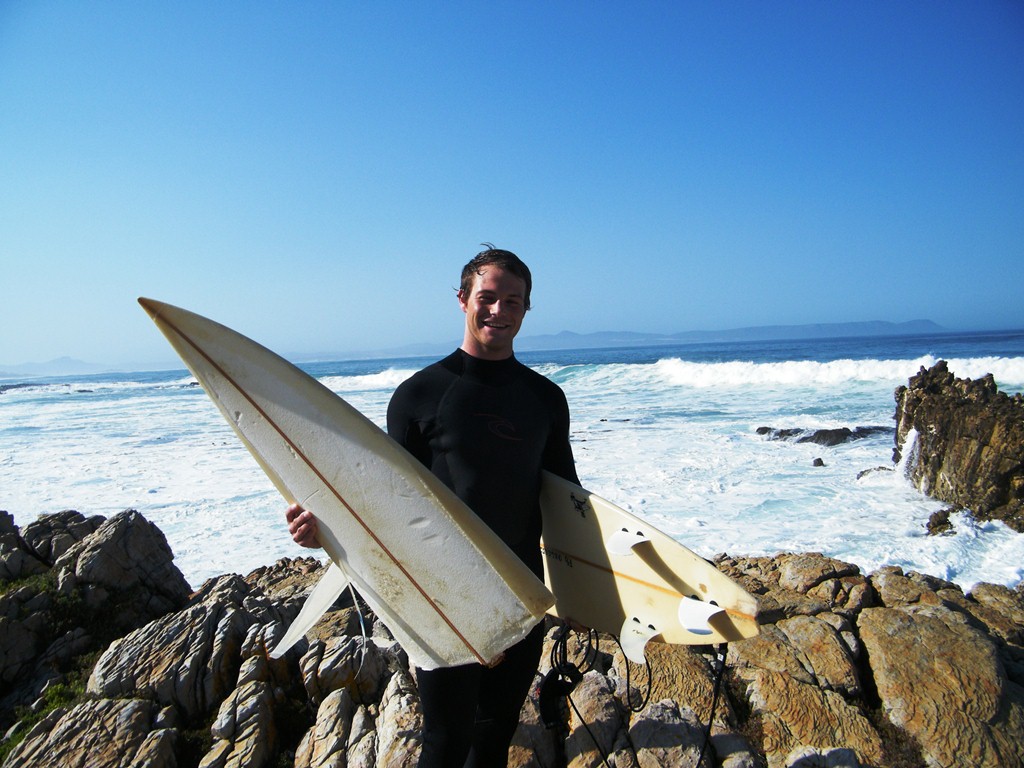 Pat with the pieces of Bjorn’s semi-gun. 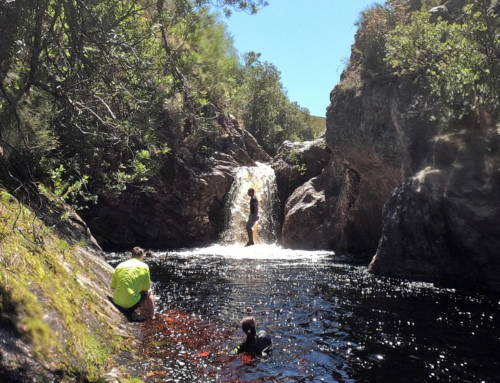 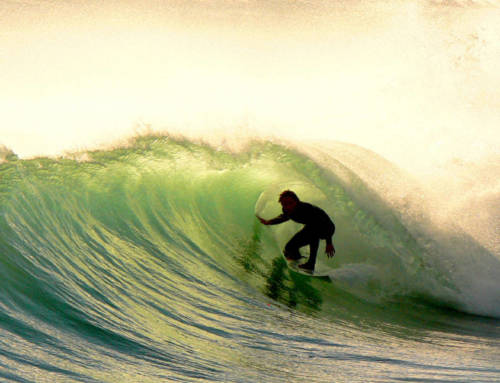 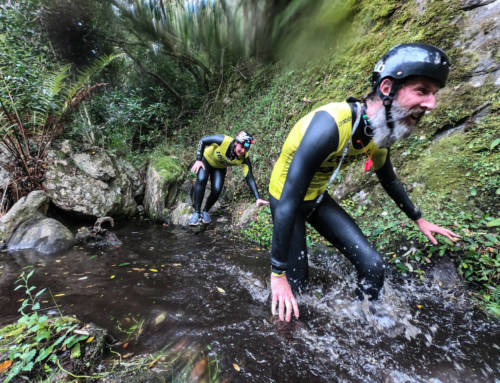 Swamble Fun and Adventures in SwimRun 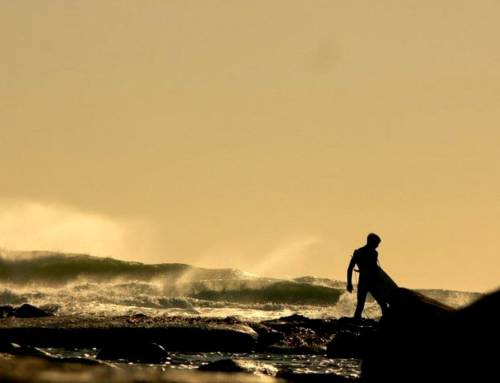